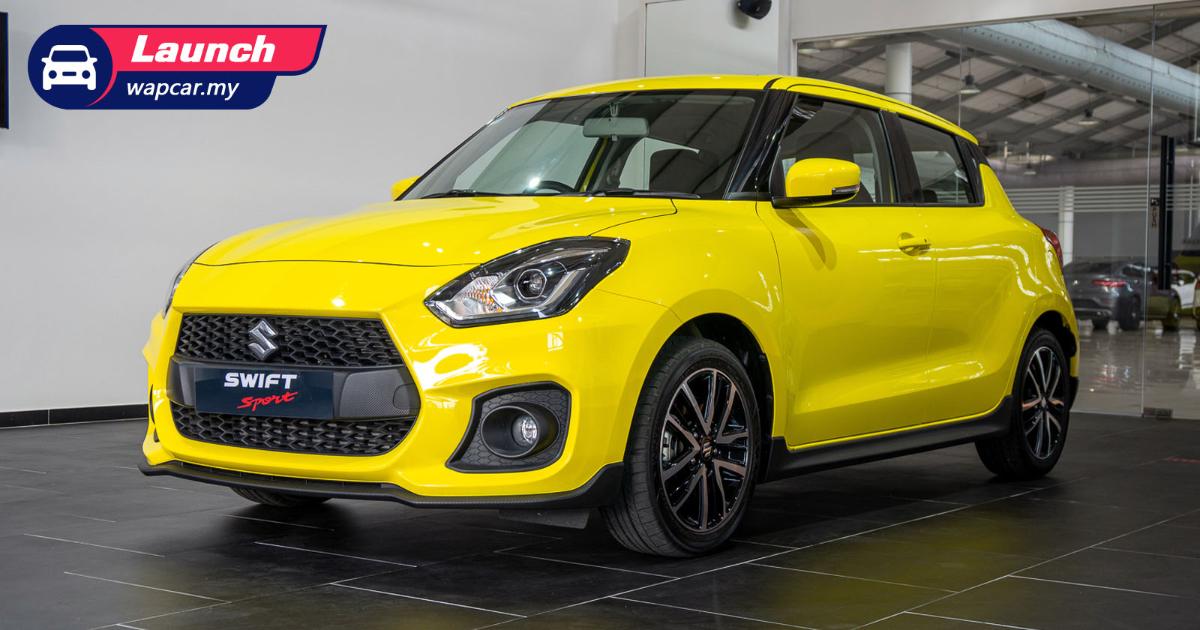 One week after announcing their return to Malaysia, Naza Eastern Motors, the company representing Suzuki in Malaysia, has launched the 2021 Suzuki Swift Sport. 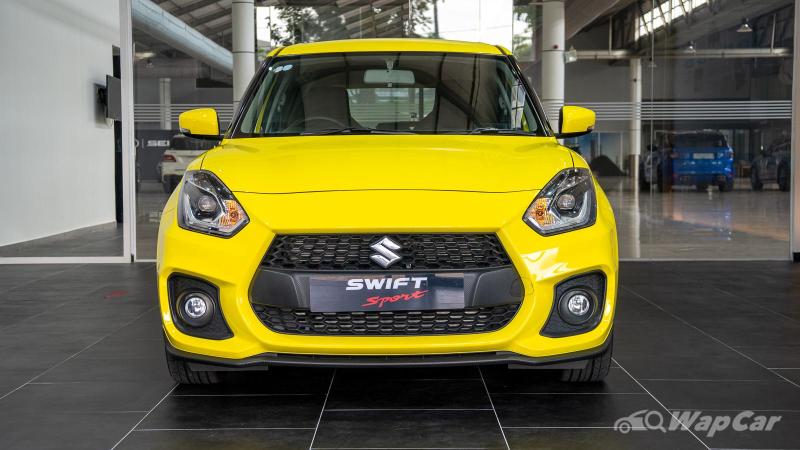 Only one variant of the Swift Sport is offered in Malaysia, priced at RM 139,900. The price is on-the-road, without insurance. 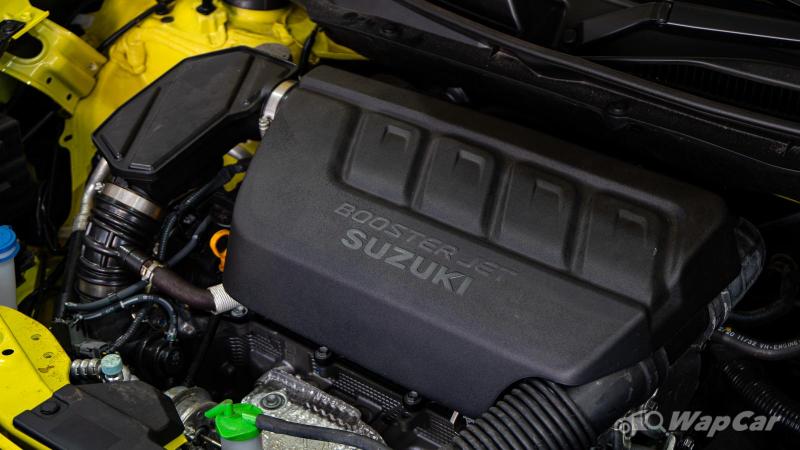 For the uninitiated, the fourth-generation (ZC33S) Suzuki Swift Sport drops its high-revving, naturally-aspirated 1.6-litre engine in favour of a turbocharged 1.4-litre engine. Power is up 4 PS to 140 PS, while torque has increased 70 Nm to 230 Nm. 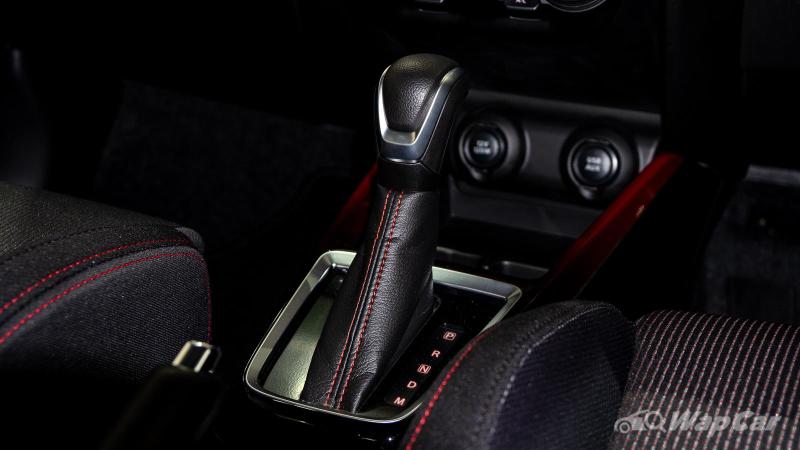 This time around, the sole transmission option is a six-speed automatic with paddle shifters. If you want a manual version of the new Swift Sport, your only option is to get a reconditioned unit.

Also Read: 2021 Suzuki Swift Sport: Should you buy recond or brand-new from Naza? 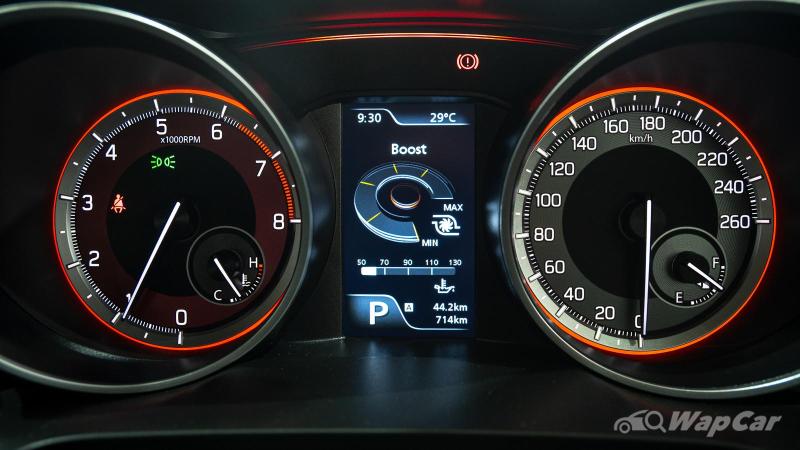 With this powertrain combination, the Swift Sport is able to complete the century sprint in just 8 seconds. Top speed of the little hot hatch is 205 km/h. 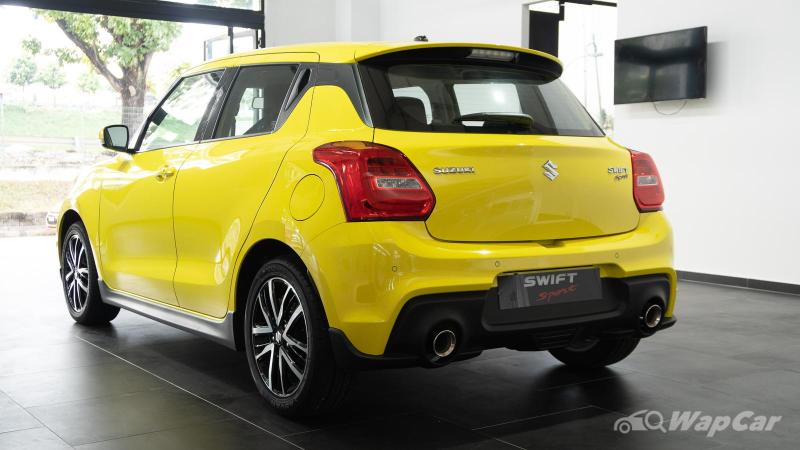 Regardless of which colour you pick, there’s no mistaking the Swift Sport for anything else on the road. 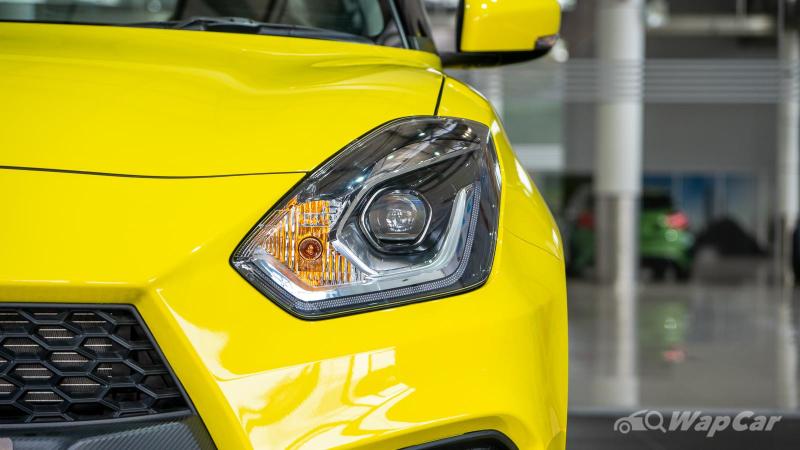 Specifications of our Malaysian-spec Swift Sport largely mirror that of the South African-spec car. As such, it gets automatic LED projector headlights with LED daytime running lights and LED tail lights. 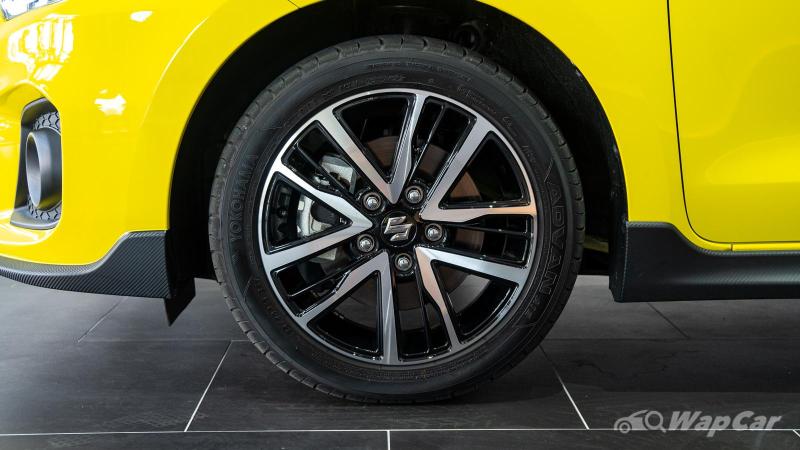 Unlike the Japan-spec car that wears 17-inch alloy wheels, our Malaysian-spec cars get smaller 16-inch units.

With it being a Swift Sport, it also gets a rear spoiler, carbon fibre-like exterior trim, and dual muffler tips. 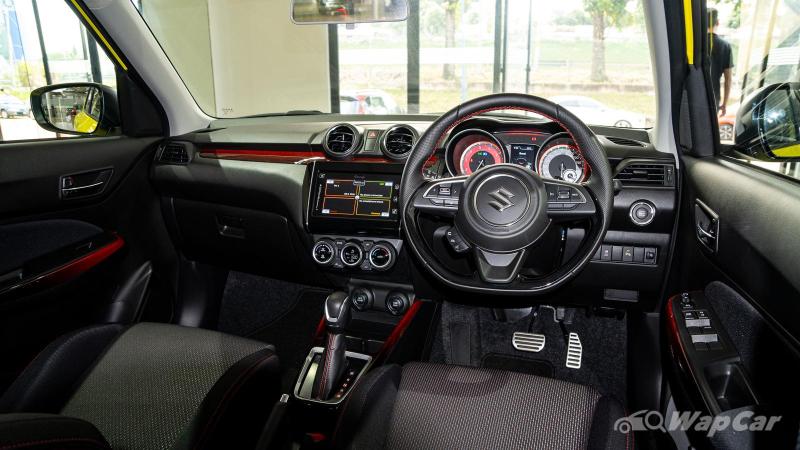 Inside, the Swift Sport has all the modern features you would expect, including a 7-inch touchscreen with Android Auto and Apple CarPlay support, single-zone automatic air-conditioning, push start button, and 60:40 split folding rear seats. 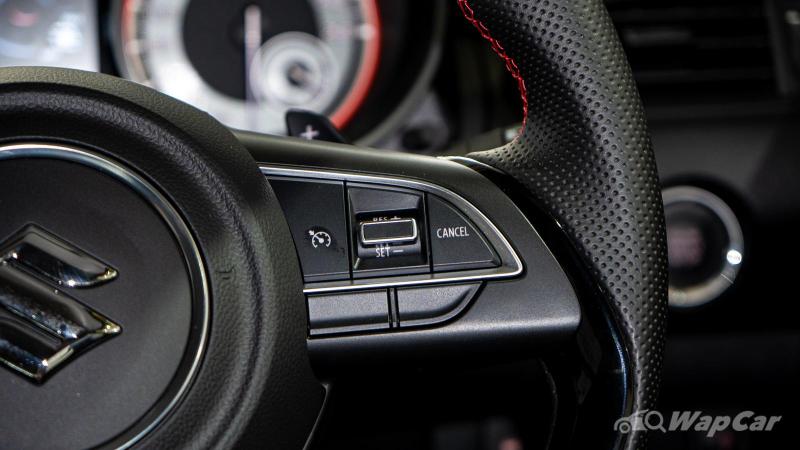 Being an automatic, the Swift Sport also gets steering wheel-mounted paddle shifters. 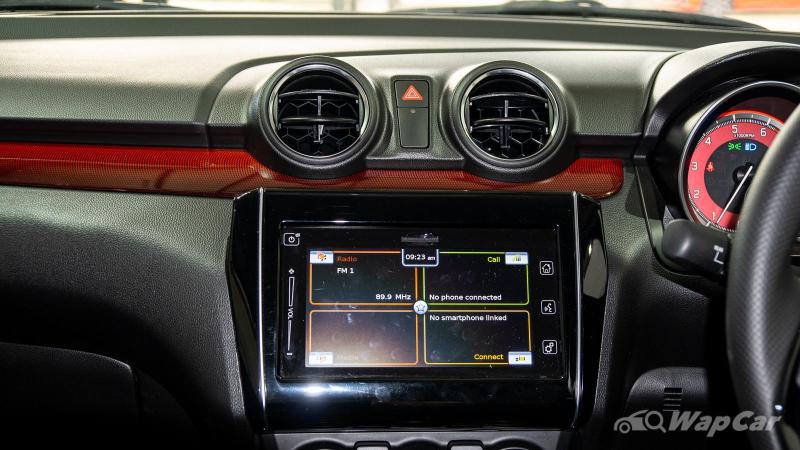 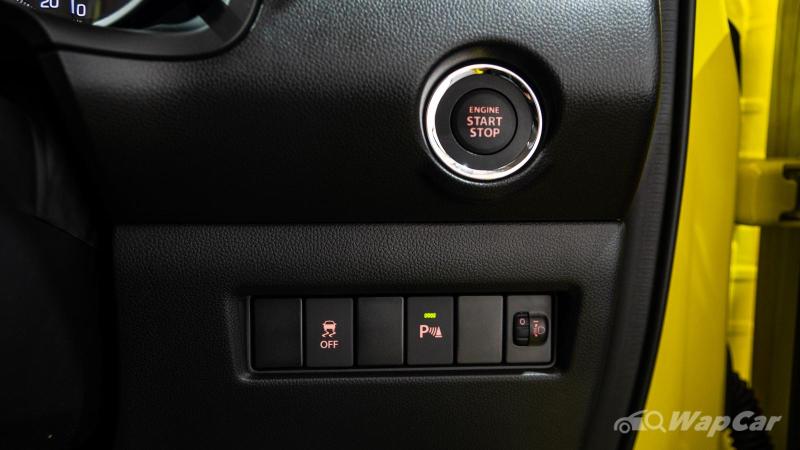 Despite its RM 140k price tag, the Swift Sport is relatively spartan when it comes to safety, offering six airbags and stability control. 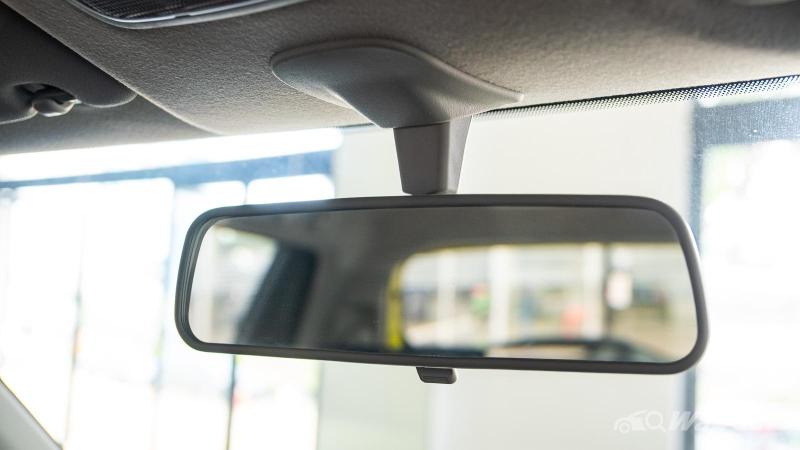 No ADAS features to be found on the Naza-imported Swift Sport; only the reconditioned units have this feature. Suzuki says the ADAS system is not calibrated for Malaysian driving conditions, and they cannot guarantee its effectiveness here.

Body colours – Which bright colour is your pick? 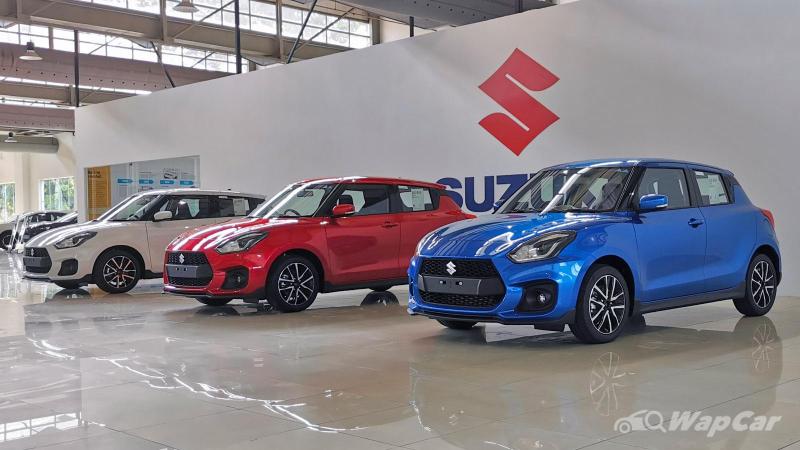 Unlike overseas models, the local-spec Swift Sport is not offered with the dual-tone roof option. 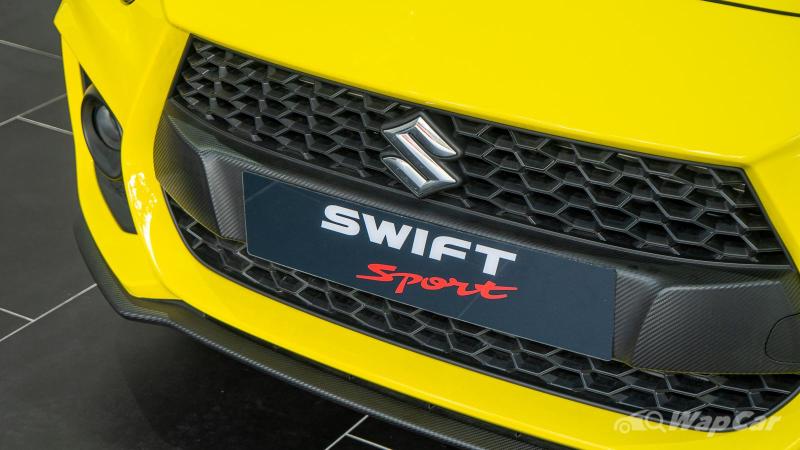 The enthusiast in me bemoans the loss of the six-speed manual transmission in the official Swift Sport, but truth is, enthusiasts make up an insignificant number of buyers. Why can't buyers be given the option to choose? We've explained it here.

Majority of car buyers will end up purchasing the automatic variant, and by that logic, Naza Eastern Motors has done their homework. Want to sell more cars? Offer the automatic variant. This point is proven by slow sales of the FK8 Honda Civic Type R, Ford Fiesta ST, Ford Focus ST, and even Naza’s own Peugeot RCZ and Peugeot 208 GTI. 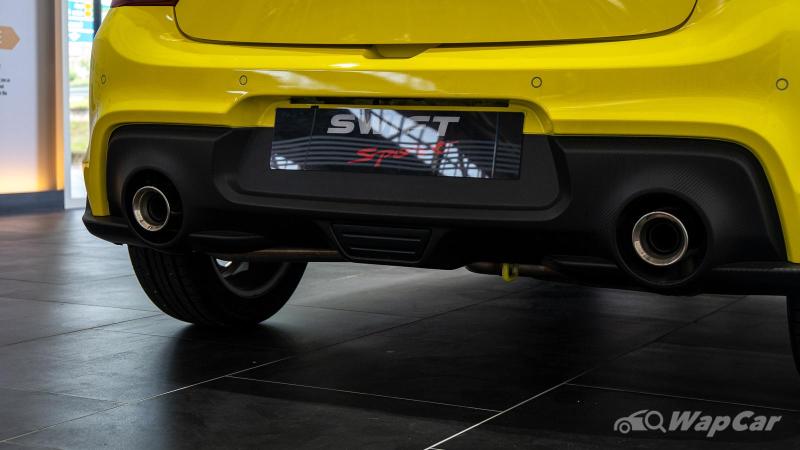 While RM 140k may seem like a tough pill to swallow, considering that prices of the past two generations of the Swift Sport hovered at the RM 100k mark, keep in mind that a lot has changed since then.

For one, the Swift Sport’s turbocharged engine is far more sophisticated than the naturally-aspirated version. The new engine gets a direct-injection system coupled with a turbocharger, both of which aren’t cheap to develop. 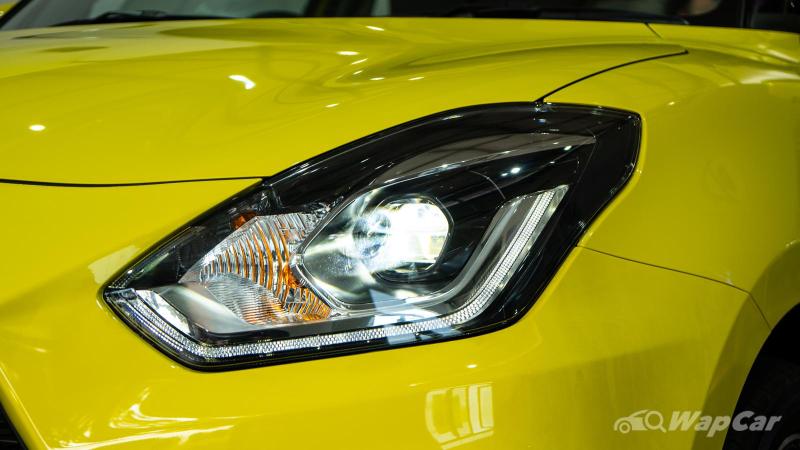 Then there’s our currency. Compared to a few years ago, our forex has taken a sharp dip. At the moment, the Ringgit is current trading at around RM 4.15 to 1 US Dollar. Seven years ago, it was trading around RM 3.20 for most of 2014, before depreciating rapidly towards the end of 2015, and it has never recovered since.

As such, the price increase over the previous generation model is inevitable, regardless of whoever that imports the model.

With that said, we’re still glad to see the return of Suzuki in Malaysia and definitely looking forward to spend some quality time with it. 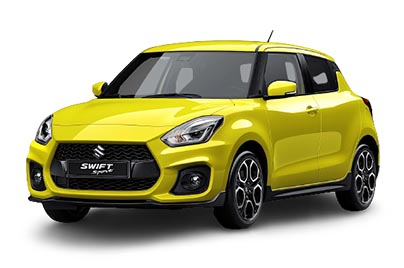