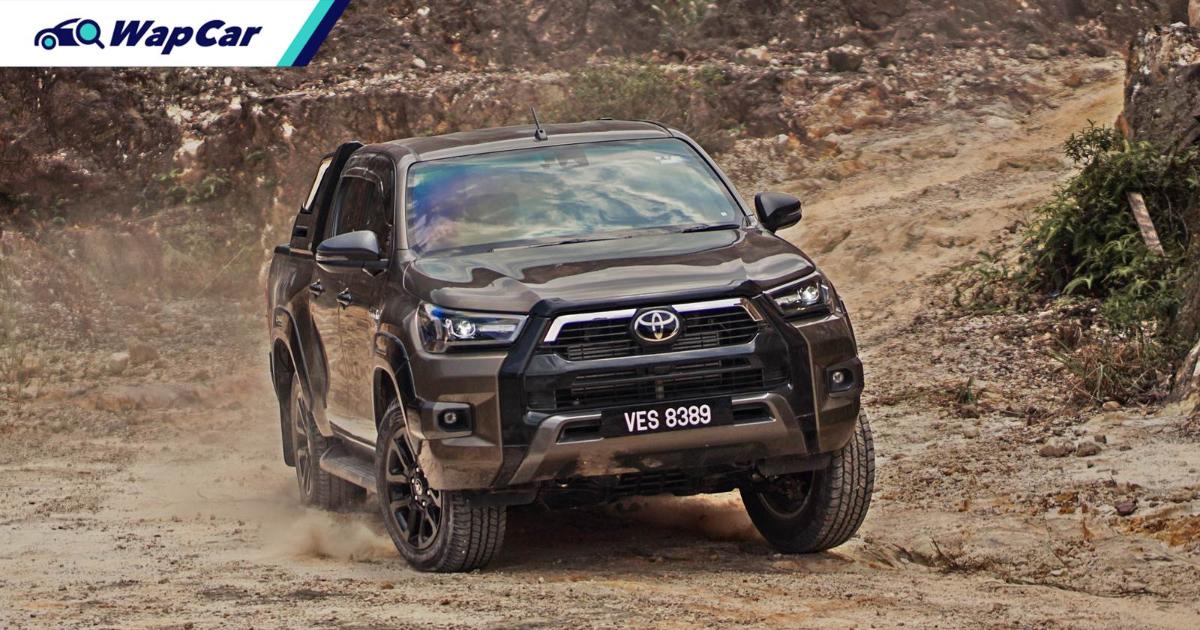 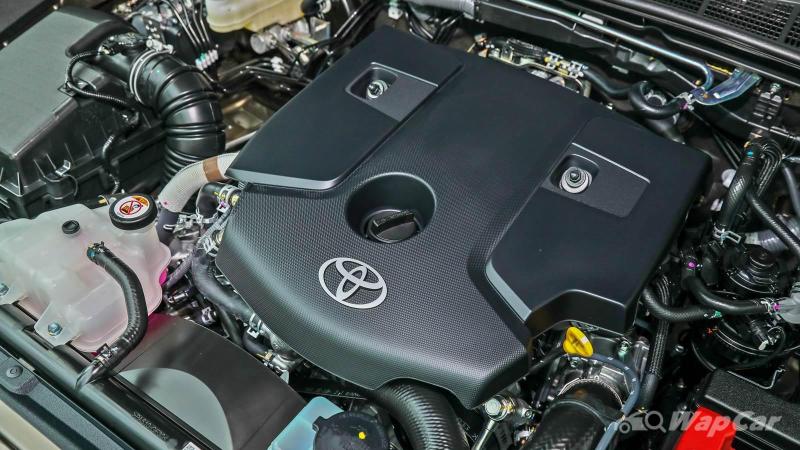 There’s also a 150 PS/400 Nm 2.4-litre engine for the lower variants – same power output as before but it is now tweaked to be 5 percent more fuel efficient. 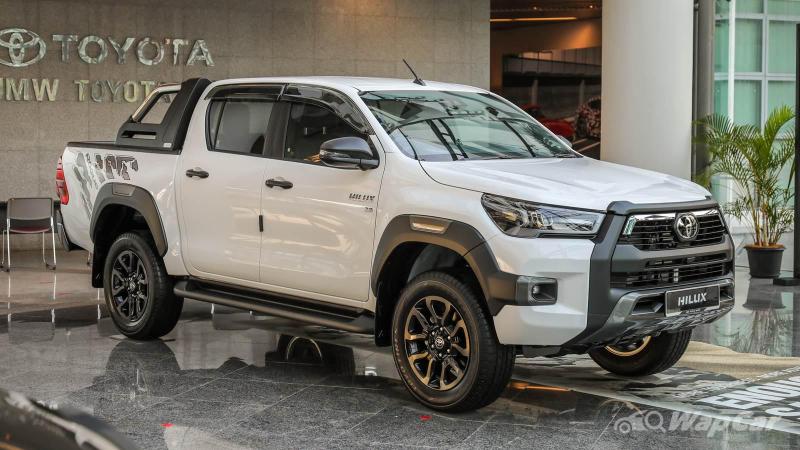 These power upgrades are necessary, as the Hilux’s rivals are all pushing ever higher power output levels. The 2.4-litre Mitsubishi Triton Adventure X, which uses a lightweight and quiet operation aluminum engine (the only one of its kind in the segment), now makes 181 PS/430 Nm, while the 2.0-litre bi-turbo Ford Ranger WildTrak makes a headline grabbing 213 PS/500 Nm. 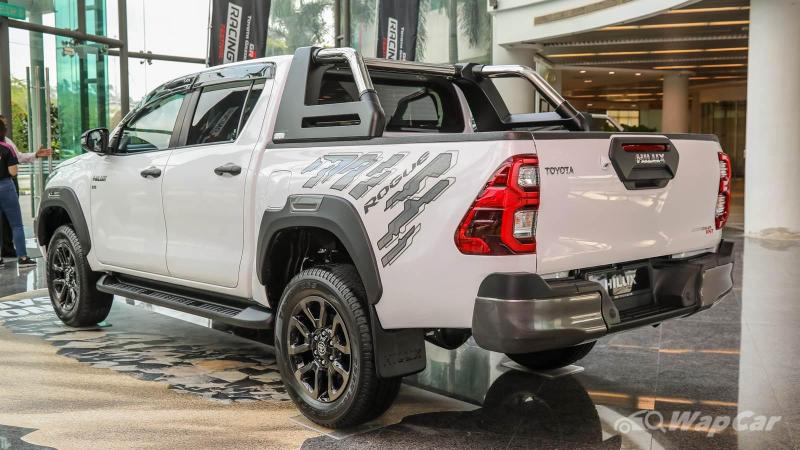 What is less said during its local launch of the new Hilux however, was the many off-road performance enhancing features that have been added. 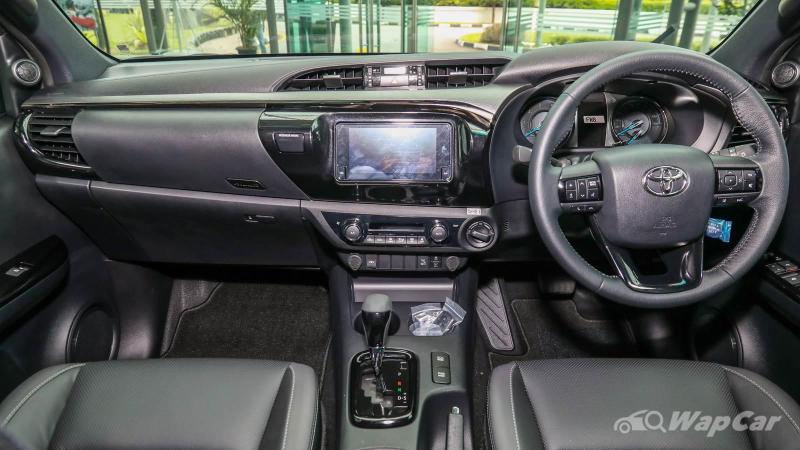 Toyota emphasized a lot on the variable flow control power steering, which improves fuel efficiency by reducing torque assistance from the power steering pump, putting it in stand-by mode, when the car is being driven on a straight road. 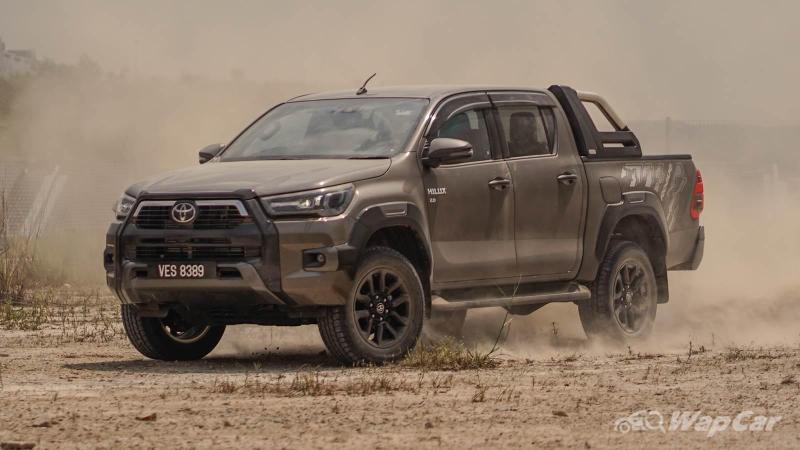 The other chassis upgrade is the new and improved leaf spring suspension in the rear. In Thailand, the new suspension is given a new Superflex name, which oddly, isn’t talked much here. However we can confirm that the Malaysian specs locally-assembled Toyota Hilux Rogue uses the same suspension as Hilux models sold in Thailand.

The new ‘Superflex’ suspension has a 6 percent longer main leaf and a reduced reduced spring constant (stretch). It also adds an additional ‘helper’ spring. The bushes connecting body and chassis have been optimized further, and now comes with a shackle bush that features a self-lubricating rubber composition to reduce friction.

All of which combine to allow the new Hilux a more SUV-like level of comfort when going over rough terrain, without compromising the high level of suspension articulation that the Hilux is known for.

This new feature uses selective and automatic braking of individual wheels to replicate the function of a mechanical limited slip differential (LSD).

Like a mechanical LSD, Auto LSD prevents power from being sent to a spinning wheel that is not in contact with ground, or has traction, and diverts power to other wheels with traction. Otherwise, a vehicle’s drivetrain’s power flows in pretty much the same manner as water – it goes to where there is least resistance, in this case, a wheel that’s spinning uselessly in the air, getting no work done. LSD, be it mechanical or electronic type ones, steps in to divert power to wheels that can get the job done. 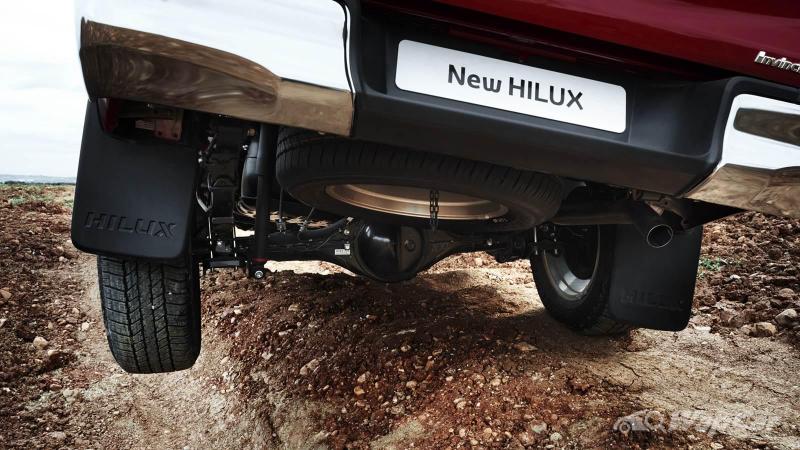 Of course, there are pros and cons with these electronic-type LSD. Explaining it requires separate post but generally, electronic LSD features like the Hilux’s Auto LSD are lighter and don’t require any maintenance, apart from changing the brake pads. Purist off-roaders however, will of course prefer a mechanical LSD. In extreme driving conditions, Auto LSD will of course wear out the brake pads faster, but for majority of users, it’s a good trade-off.

Auto LSD is an extension of the Hilux’s electronic traction control (TRC) but unlike TRC, which cuts engine power when it detects that the wheels that are slipping and losing traction, Auto LSD doesn’t cut engine power, crucial when you are trying to drive out of a slippery rut.

Auto LSD works only when the Hilux’s transmission is in H2 mode (rear-wheel drive), and at speeds of up to 50 km/h.

To activate the Auto LSD function, simply press the VSC (Vehicle Stability Control) briefly. The Auto LSD indicator will appear on the instrument panel, together with the VSC off light. A flashing Auto LSD symbol means function is temporarily unavailable due to high brake fluid temperature.

Pressing the VSC button again will return the system to default (VSC on, Auto LSD off). 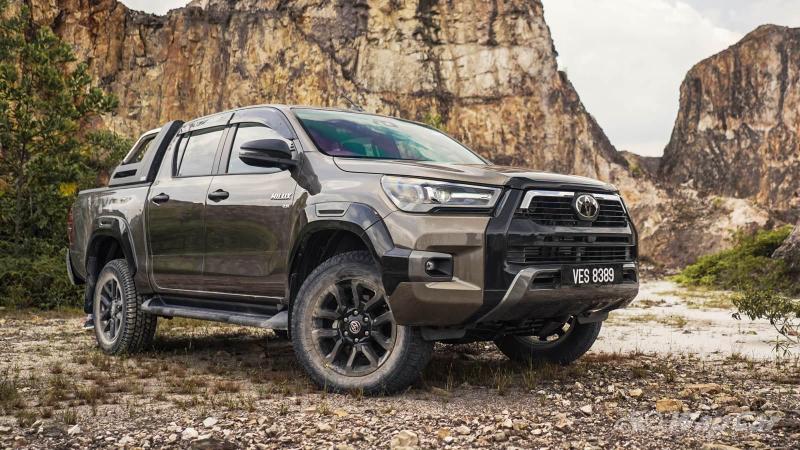 Pressing the VSC button and holding it momentarily will disable the traction control, use this only if you intentionally want to spin the wheels, for example in situations where there is soft snow or sand on the surface and you want the wheels to dig into the harder surface below for traction, ‘rocking’ the truck back and forth to free it. 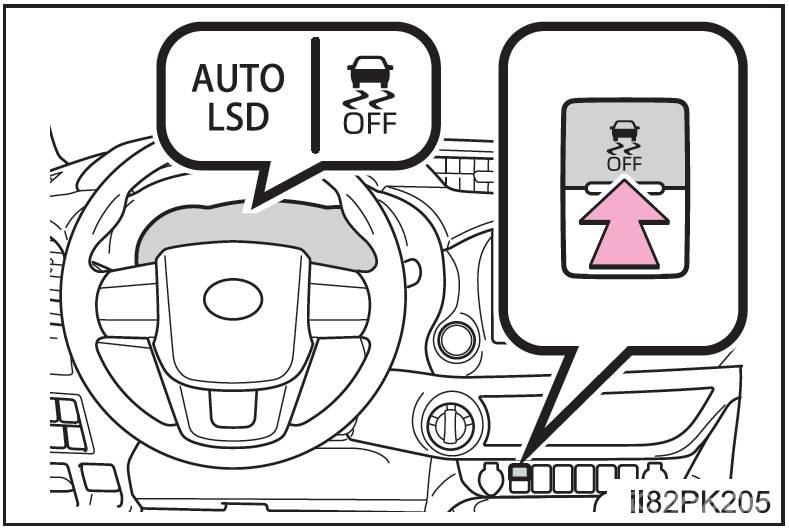 An alternative to the Auto LSD feature is of course the mechanical rear-differential lock (works only in L4 mode), which locks both rear wheels so it spins at the same speed – only use this feature if one of the rear wheels is spinning freely.

However, the effectiveness of Auto LSD (and A-TRC, to be explained in the following section) means that you rarely need to use the Rear Differential Lock feature, at least for most users (hardcore off-roads will of course have a different opinion on this, but those are rather extreme driving conditions). 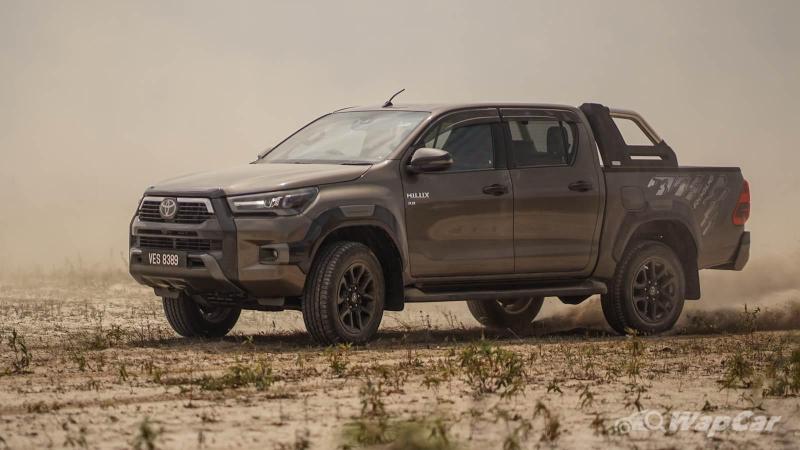 The previously mentioned Auto LSD only works in H2 mode. When you shift the Hilux’s part-time 4WD to H4 (four-wheel drive High gear) or L4 (four-wheel drive ultra Low gear, crawling speed) mode, the A-TRC system takes over. It does pretty much the same thing as Auto LSD, except that it works on both the front and rear axle. 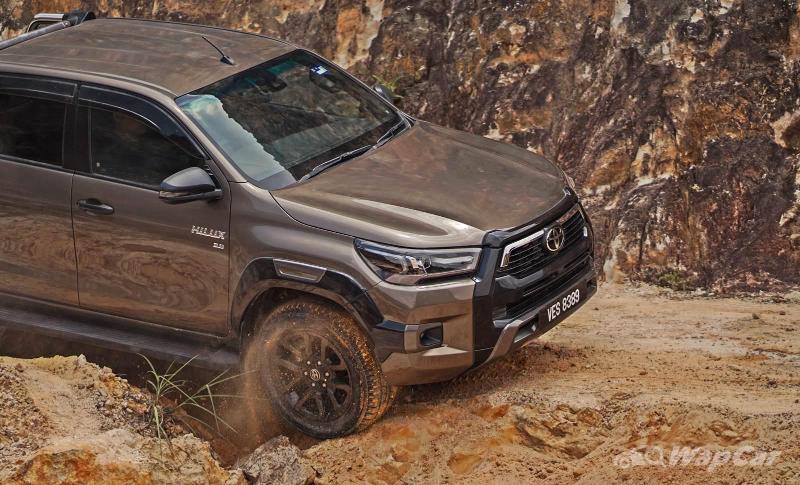 Now the 4WD is engaged, power is sent to both front and rear axle. Normally, you will need a front and rear differential lock but A-TRC gives you the same function, minus the extra weight and maintenance cost.

Previously, A-TRC works only in L4 mode but in the new Hilux, it works in both L4 and H4 modes. A-TRC engages automatically when the vehicle is in H4 or L4 mode (only for off-road driving, engaging H4 or L4 on tarred roads will damage the transmission), so there’s no need to push any button.

The video below demonstrates the working for A-TRC, but this was done using the pre-facelift model.

Other notable off-road performance specs for the Toyota Hilux is its 700 mm water wading depth. The approach angle is 29 degrees, 2 degrees poorer than Triton but the Hilux compensates by having a 3 degrees more departure angle, at 26 degrees. 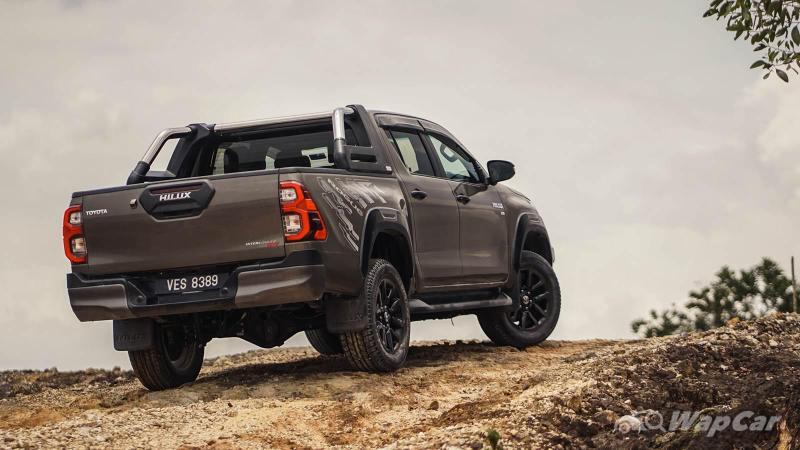 Turning circle is 6.4 metres, much bigger than the Mitsubishi Triton’s 5.9 metre, but that’s also because the Triton is a shorter truck with a shorter wheelbase, 3,000 mm vs 3,085 mm.