Recently, an overseas patrol espionage teams found three CR-V test vehicles disguised as packages running through the Appalachian Mountains in the eastern United States. It can be predicted that a new version of Honda CR-V is going to be launched.

Through the camouflage, we spotted a few changes in Honda CR-V. In the front part of the car, we find out slight changes in the headlights around the corner of the front dashboard. The grille is adjusted to make the chrome center bar visually larger than the current model. In the back of the car, an updated has been done on the rear fascia. The trapezoidal exhaust nozzle hangs lower, and the updated bumper cover feature may affect the design of rear side panels. 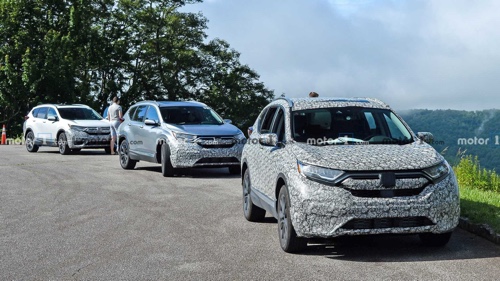 Due to the extensive camouflage coverage, it is difficult for the spy photographers to get a closer look at the interior of the car. Based on the guesses, the great modification does not seem to happen, but upgrades can be done for Honda's onboard systems.

If it's true that the new version is launched with a gentle touch on both exterior and interior, then buyers can expect to choose between two four-cylinder engines – a naturally aspirated 2.4-litre or a turbocharged 1.5-litre producing either 184 or 190 horsepower. That power is sent to the front wheels or all four by a gearless CVT box. There is an upgraded system of 2020 CR-V, namely the hybrid model that launched last year in Europe.

SUV has been updating at a very fast speed and the fifth generation of Honda CR-V has a great vogue since its debut to the public. Against this background, we are all expected about Honda's latest model in 2020.