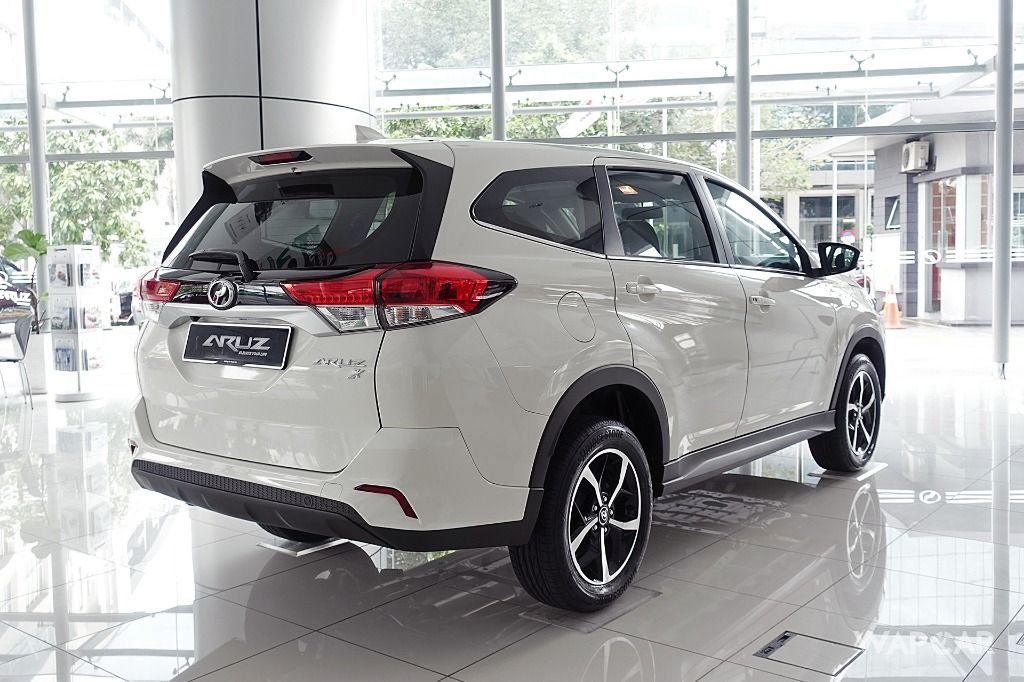 It’s Perodua’s first SUV (the company calls the Alza an MPV) and it is based on the latest Toyota Rush. Packed with advanced safety features, rugged looks and a 7-seater configuration, the Perodua Aruz is a viable choice for buyers looking for an affordable people carrier.

The Aruz is a ladder frame-based (same chassis as pickup trucks) 7-seater SUV and there are two variants on sale in Malaysia priced at RM 72,900 and RM 77,900.

All variants are powered by the same 2NR-VE 1.5-litre naturally aspirated four-cylinder Dual VVT-i petrol engine paired to a 4-speed automatic transmission. Because of its ladder-frame underpinnings, the Aruz is rear-wheel driven. 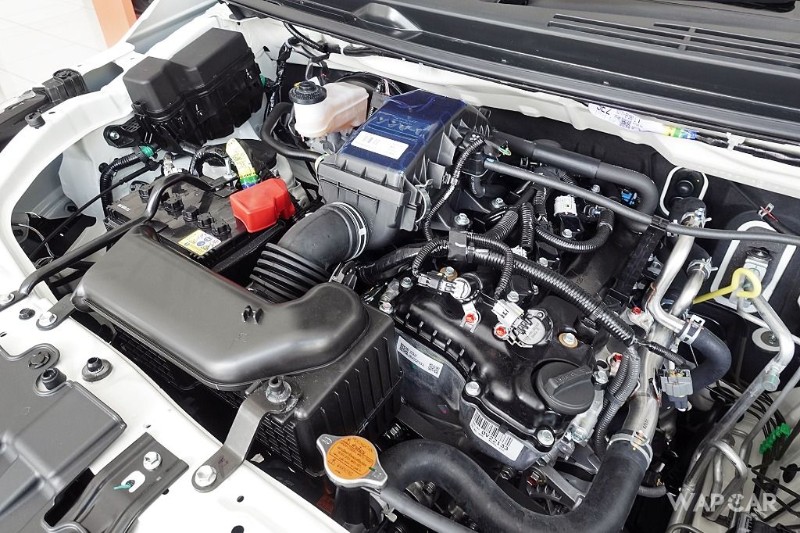 The pick of the range is the 1.5 AV. It is the only variant to come with Advanced Safety Assist 2.0 which is an improved version of Perodua’s Advanced Driver Assistance Systems (ADAS). It has a higher operating limit and added pedestrian detection function for the Pre-Collision Warning.

However, if you can make do without ASA 2.0 and leather trimmings in the cabin, the entry-level 1.5 X will suffice. 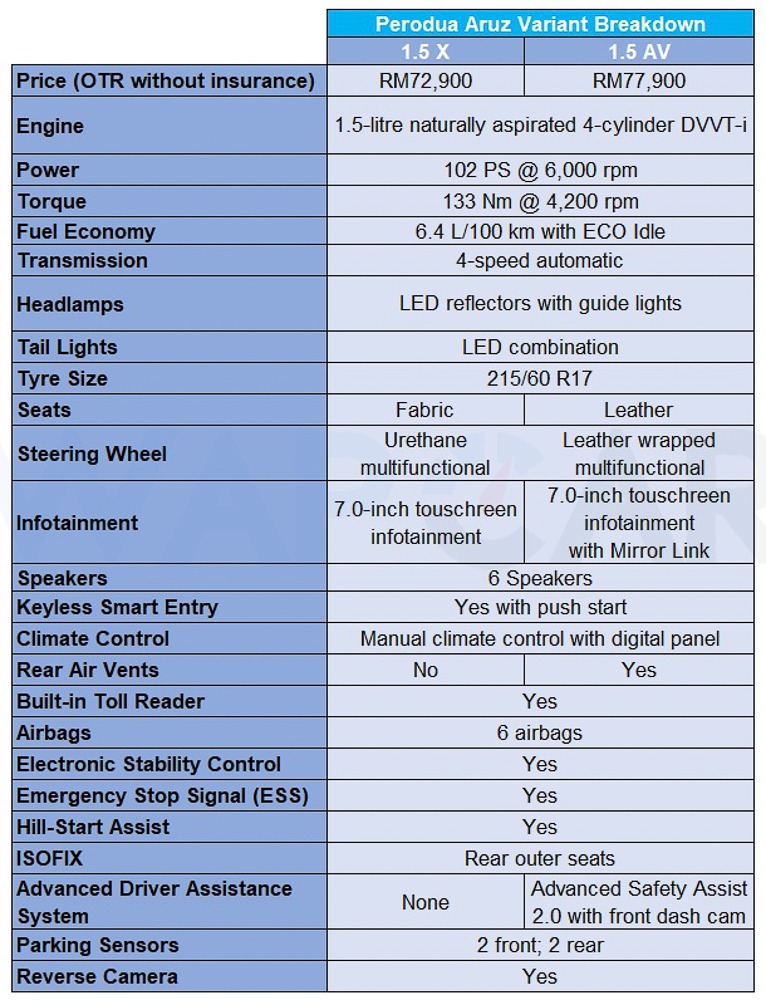 Being based off a Toyota model, the Aruz will naturally come with the assurance of bulletproof reliability and low maintenance cost.

Buyers looking to frequently ferry more than 5 occupants will be glad to know that the third-row seats can comfortably accommodate an average height adult as the middle row seats can slide and recline to free up more space. The rear air-cond vents on the 1.5 AV can also keep the rear occupants well chilled. 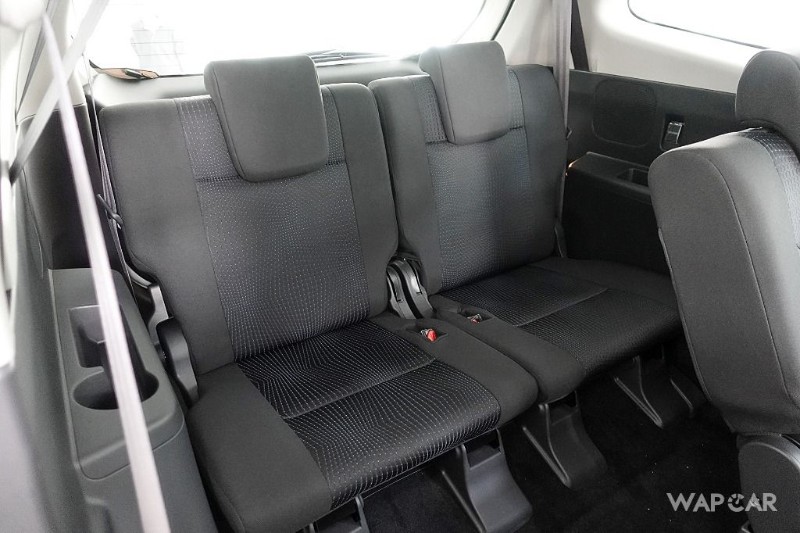 The Aruz also scores well in the safety department with all variants receive 6 airbags, Electronic Stability Control and anti-snatch hook as standard. Kudos to Perodua for not skimming on safety equipment.

What is not so great is the ladder frame-based chassis which flexes a little too much when going over undulations. In town, it can be quite uncomfortable but, on the highway, the wide 215 profile rubbers keep the SUV fairly planted at speeds.

Fuel consumption is also quite high, mostly due to gear ratios that are adjusted to cope with the heavy car and load. The engine speed spins at 3,500 rpm even when travelling at just 110 km/h, meaning that it not only burns more fuel, but is also noisy at highway speeds.

The plus side is that the Aruz will be able to withstand heavy loads and go through rugged terrains thanks to its rigid body.

Contrary to popular belief, the Proton X70 is not, and never will be a direct competitor to the Aruz. The two exist in a vastly different price bracket and segment which appeals to a different type of buyers. Drawing parallels between the two simply because they’re national cars is unfair to both the cars.

The closest competitor to the Aruz will have to be the Honda BR-V and its twin sibling, the Toyota Rush. The BR-V offers a more composed and car-like driving characteristic and is also more fuel efficient, but its kit count (only 2 airbags) is nowhere near what the Aruz has. Not to mention it is also RM 10,000 more expensive. 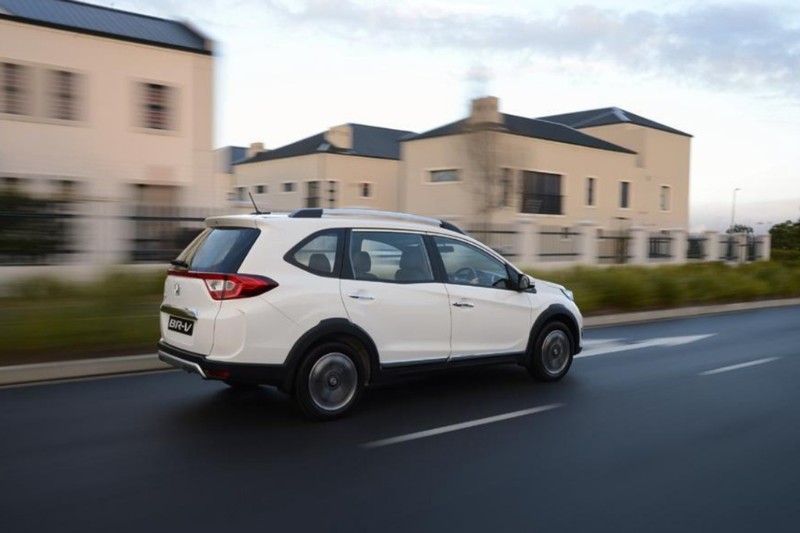 The Rush suffers from the same shortcomings of the Aruz and tries to make up for it with additional features like Blind Spot Monitor, Rear Cross Traffic Alert and Panoramic View Monitor (360-degree camera). Unfortunately, its price tag of RM 93,000 to RM 97,000 is indeed a tough pill to swallow, for what is essentially the same car.