Review: Perodua Axia 2019 Style - Stands out from the crowd, but is it enough? 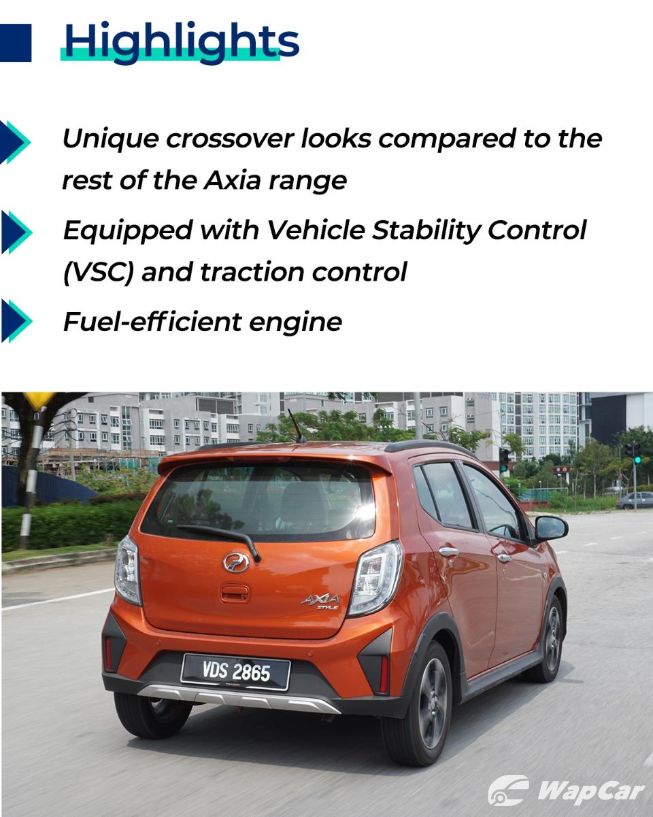 ​The SUV and crossover trend is undoubtedly on the rise and it's happening globally. As much as fellow enthusiasts are against this trend, it's easy to see the appeal of an SUV; taller ride height for a better view out, greater sense of security, and go-anywhere ground clearance.

Bearing that in mind, it's little wonder the Perodua Axia gets jazzed up with crossover elements for the Style variant. Despite its looks, it does not gain any additional off-road capabilities compared to the other Axias in the range. Specs wise, it largely mirrors the G Xtra variant save for the keyless entry and push start button. 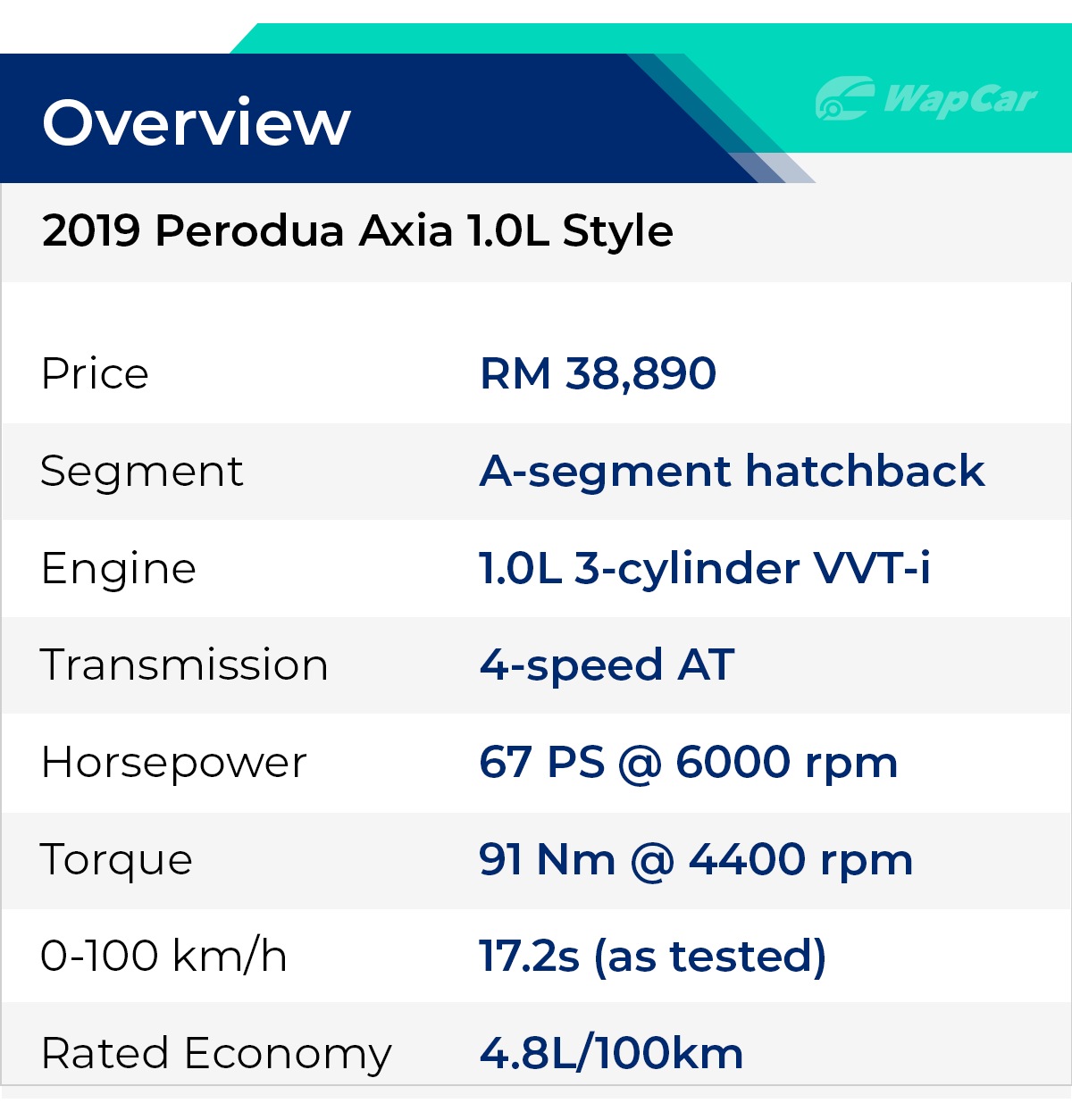 ​In terms of positioning, it sits in the middle of the Perodua Axia model range. It does not get Advanced Driving Assistance System (ADAS), or as Perodua calls it - Advanced Safety Assist (ASA), which is featured in the Advanced variant. 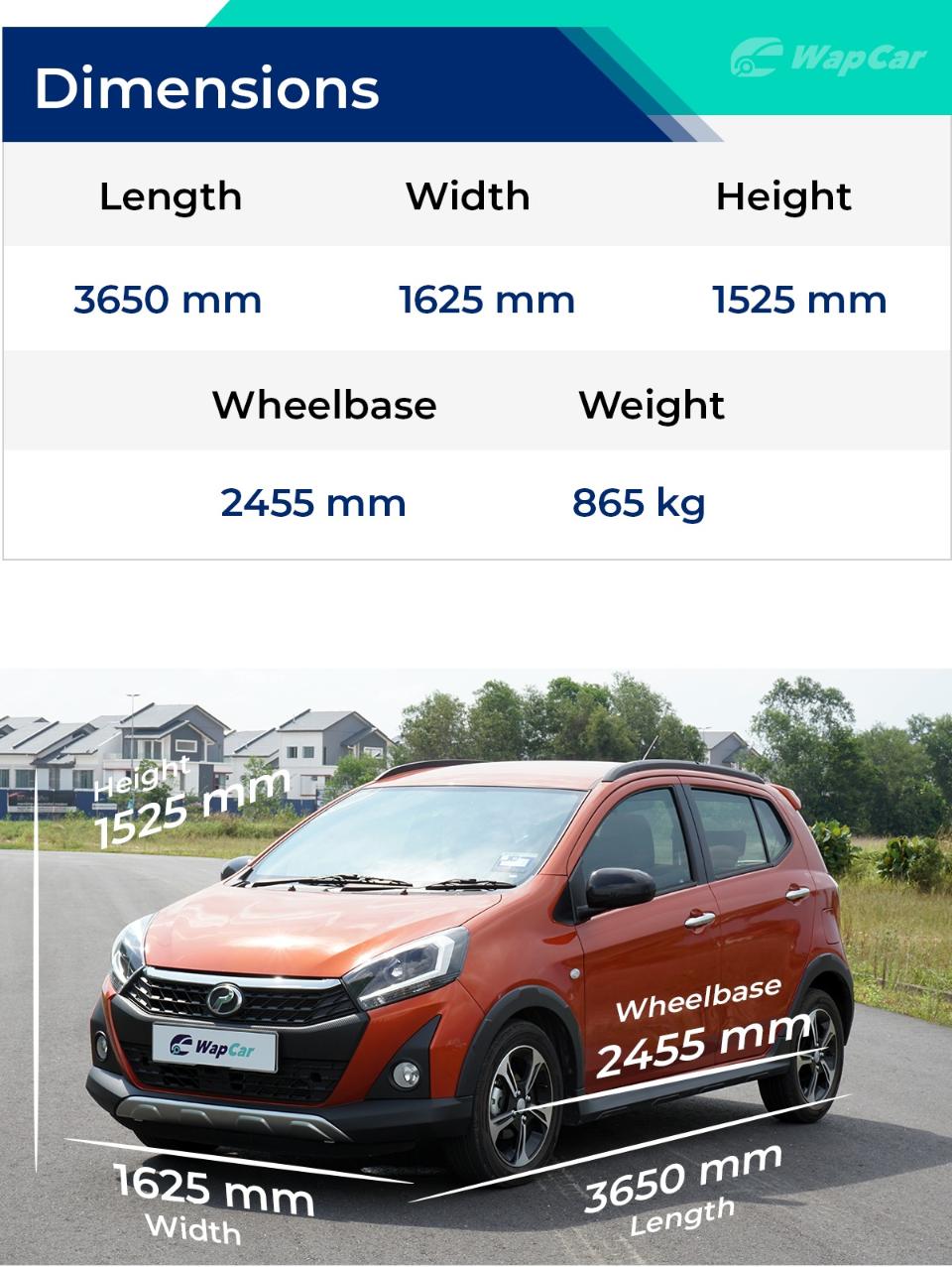 ​To inject a dose of ruggedness into the looks, there are black cladding all around the bottom edge of the car, roof mouldings that are purely for aesthetic purposes, and silver plates on the front and rear bumper that is again, for looks and does not protect the car's underside from damages. 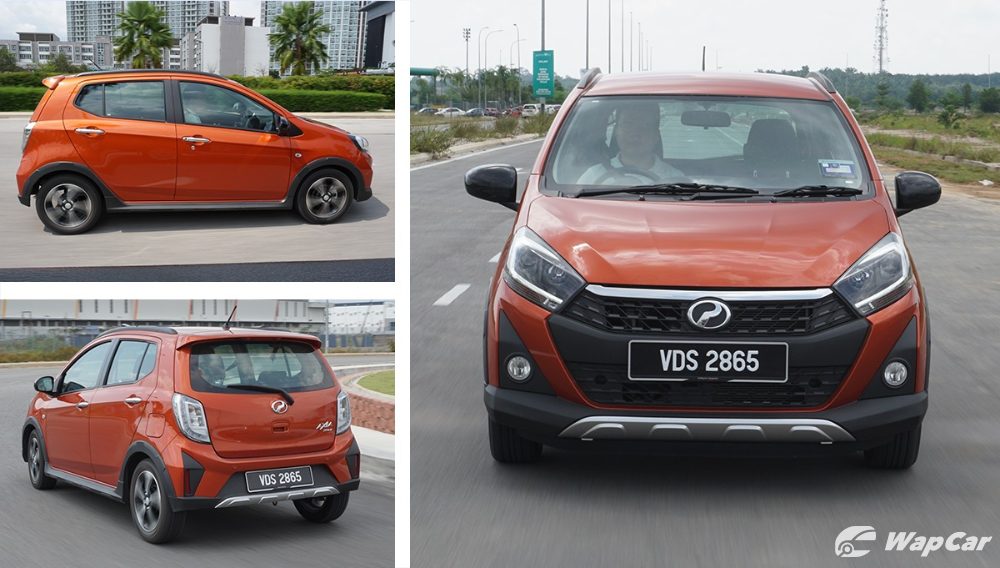 ​The Perodua Axia Style gets the most noticeable change among all the variants in the 2019 facelift. It's not just the crossover bits, there is a hexagonal front grille with carbon fiber-esque texture reminiscent of the previous generation Myvi SE, and triangular inserts on the bumpers around the fog lamps.

And to stand out even more, buyers can opt for the Style-exclusive colour - Sunrise Orange. Combined with the crossover bits, it is indeed eye-catching as complimented by friends and relatives. 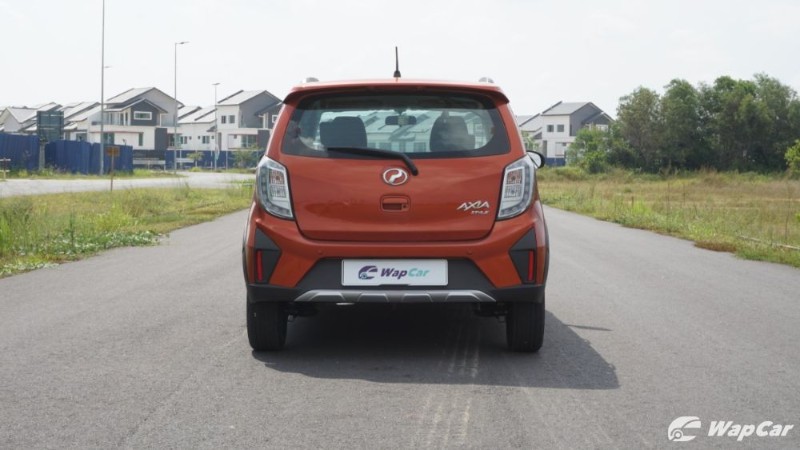 ​The 2019 Perodua Axia Style fares commendably in terms of paint and build quality with only minor discrepancies in panel gaps and paint thickness. 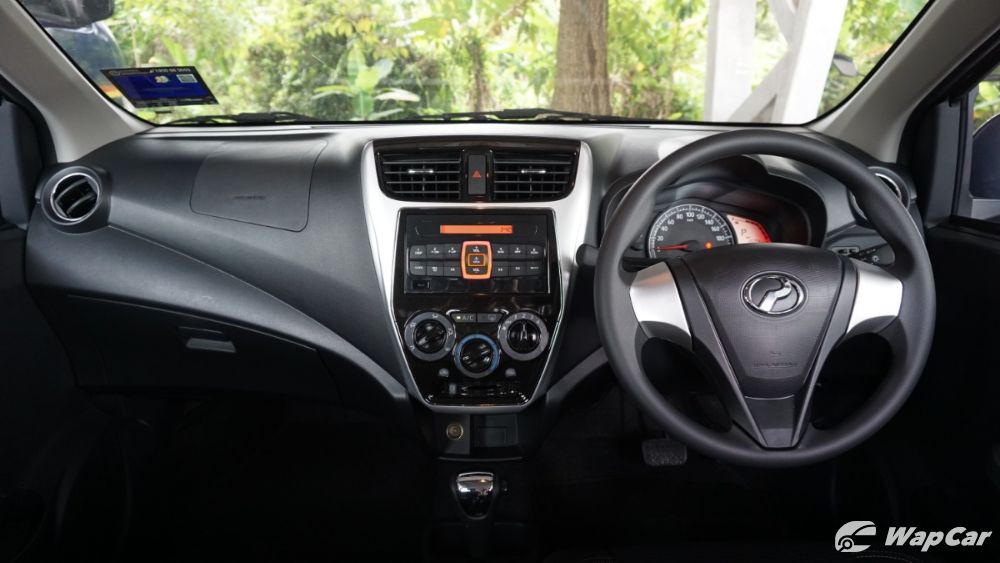 Moving inside, it remains very much similar to the 2017 facelift with the exception of the new jeans-like seat material, which is pleasant to the touch and gives the impression of robustness. There is also the Perodua-patented anti-snatch hook for ladies with handbags.​ 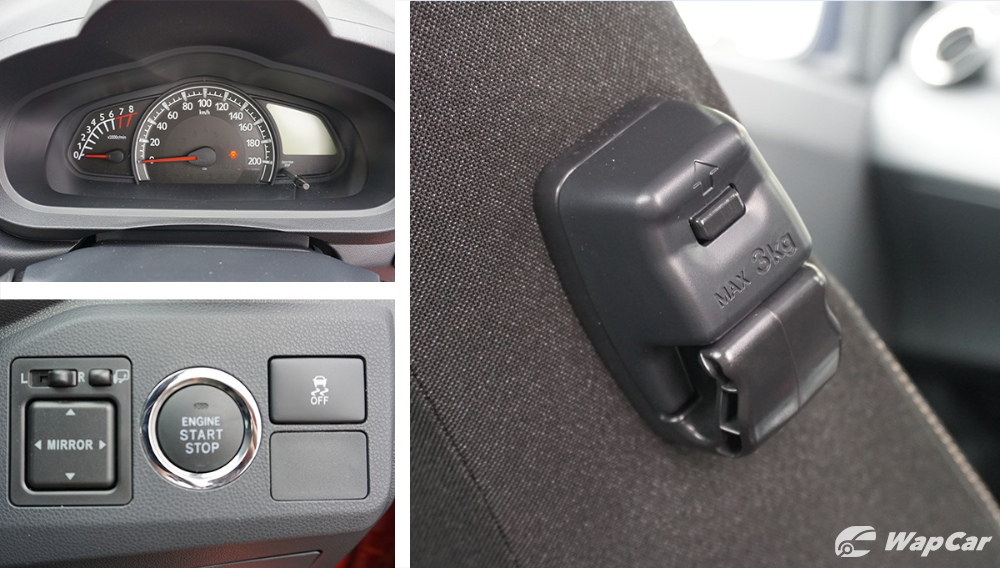 Plastics all around the cabin are hard, no surprises here considering the price point, but material as well as build quality are commendable with no squeaking or rattling sounds. Boot space is average for a hatchback at 260 litres.

When the need for music arises, there are only 2 options in the 2019 Perodua Axia Style - FM radio or USB. There is no Bluetooth connectivity sadly. It does get 4 speakers in total over the Standard variant's measly 2.

For those curious about the audio quality, it is less than satisfactory as it sounds tinny and unrefined, no matter the adjustment on the equalizer.​ 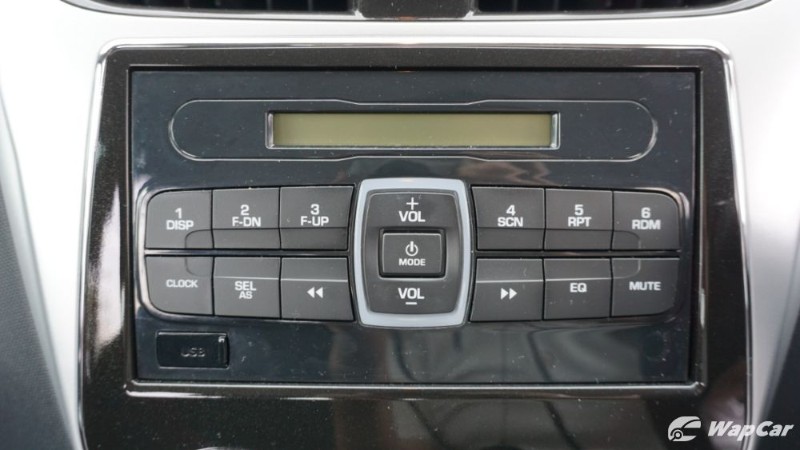 Performance and handling aren't synonymous with the Perodua as it is propelled by a 1.0-litre 3-cylinder engine that churns out 67 PS and 91 Nm of torque, making it the least powerful car on sale in Malaysia.

Transmission duty is handled by a conventional 4-speed automatic, which is not a bad thing as operation is smooth and it has proven reliability track record. Century sprint is achieved in a leisurely 17.2 seconds as tested.​ 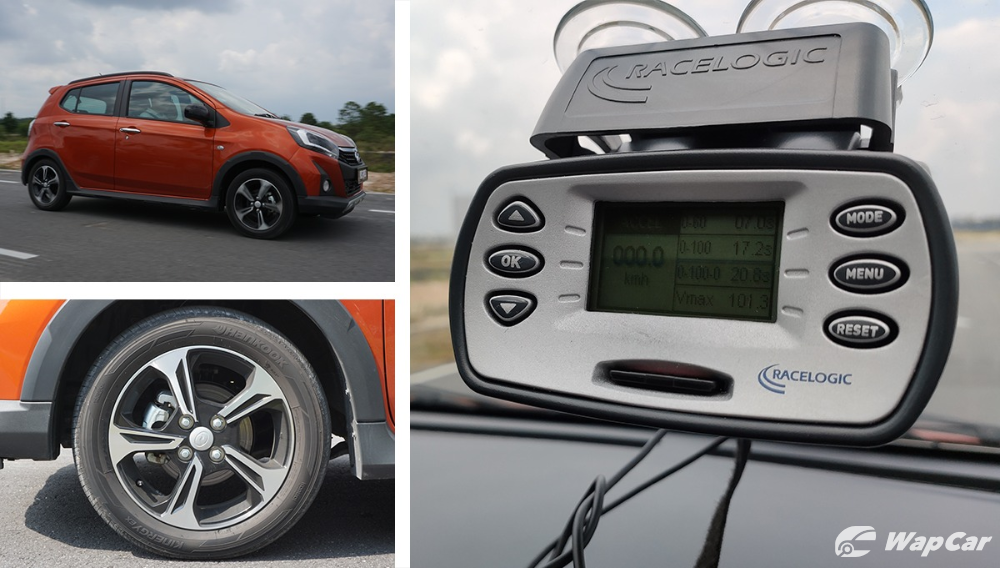 However, in the pursuit of efficiency, urgency is quelled as the nature of the transmission is more laid-back by which small inputs of the throttle are ignored, and only a large depression of the pedal will get it to shift down a gear lower.

On top of dulling the response, it shifts up as early as possible, sometimes to just above idle rpm. And because of the characteristics of a 3-cylinder, the engine feels like it is being lugged. ​ 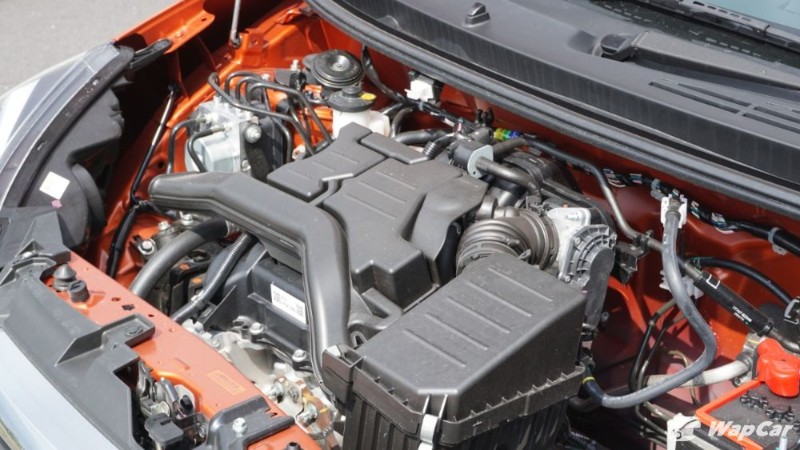 Once it gets going though, the Perodua Axia is able to keep its momentum going and keep up with traffic fairly easily. At the national speed limit (110 km/h), the engine hums away at 3,000 rpm without feeling too out of breath. But if it were to overtake from that speed, let's just say good planning is required.​ 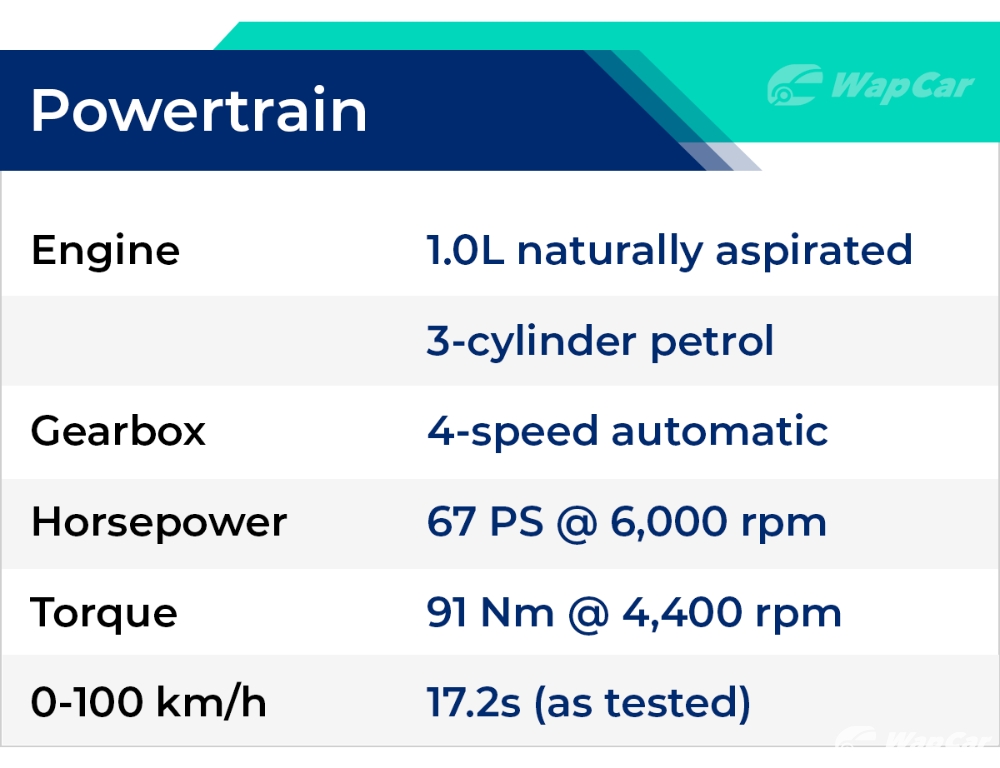 The ride height is raised slightly courtesy of the larger wheels, yet the Perodua Axia Style goes through the twisty bits with acceptable amount of body roll. It isn't particularly rewarding to push it in the corners, but it's nice to know that it is able to hold its own.

First thing that comes to mind when stepping into the car is the interior spaciousness, it feels even more spacious than the previous generation Myvi. Despite the lack of any steering adjustments, tilt or telescopic, myself with a 177 cm frame can get into a comfortable driving position and the front seats are adequately supportive.​ 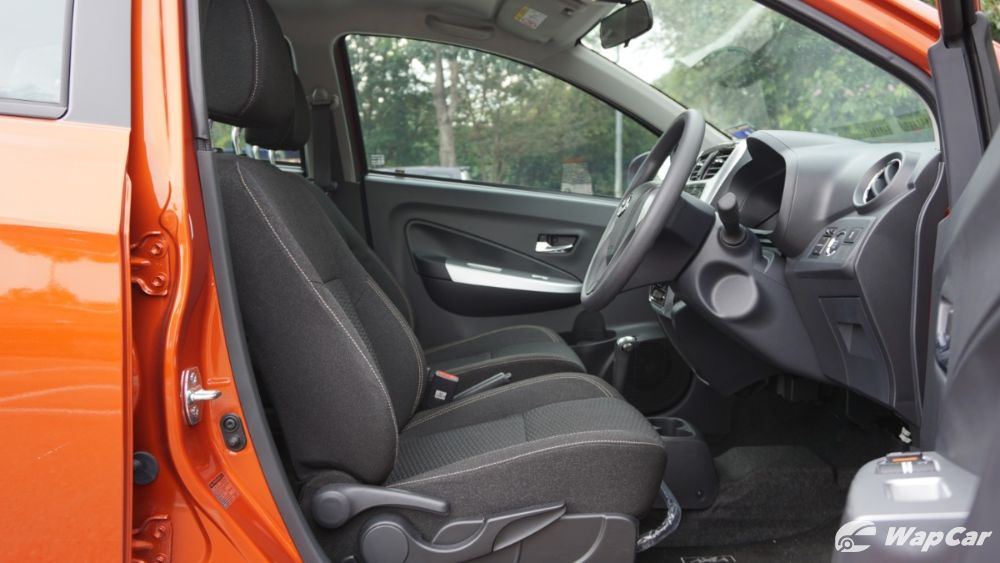 The airy cabin also extends to the rear with generous amount of legroom and headroom. But the rear seat bench is rather flat, lacking in sculpture and support.​ 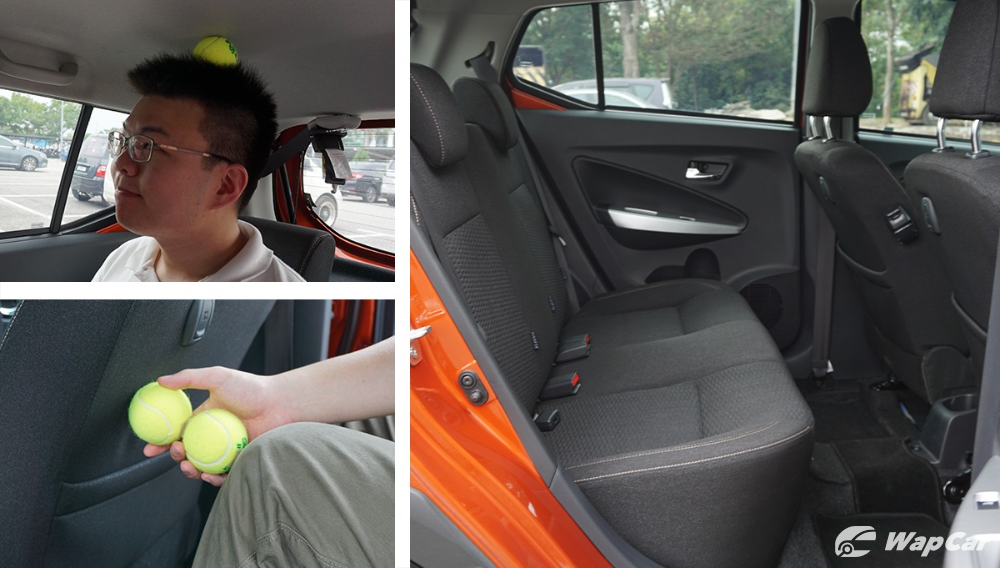 On the move, the overall ride quality is acceptable though the suspension is firmer than expected. It deals with major bumps and uneven roads well enough and only gets crashy going over sharp edges or potholes.

Vibration from the 3-cylinder engine is only felt at crawling speeds but even then it isn’t bothersome and smoothens out at a cruise. During hard acceleration or overtaking, the engine does get pretty loud.

Sound insulation is below par in today's standards, especially when compared to the 2019 Proton Saga. Wind noise would creep into the cabin from about 80 km/h onwards and by then tyre noise will begin to compete for attention. At 110 km/h, the decibel meter indicated an average of 72 dB. 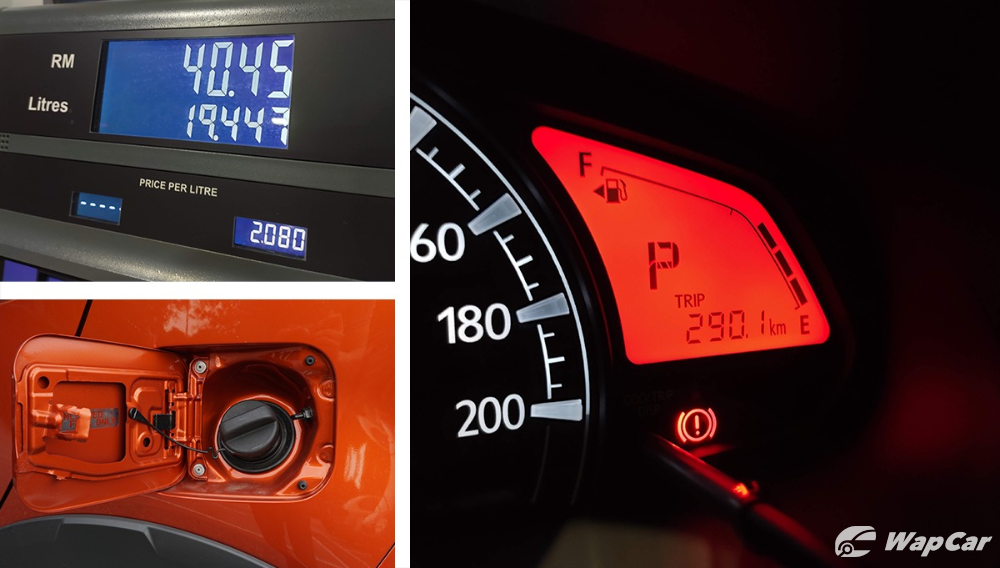 The 2019 Perodua Axia Style consumed 19.4 litres of fuel after travelling 290.1 km in mixed conditions and that includes the multiple 0-100-0 km/h testing. Working those numbers out, the Perodua Axia Style's fuel consumption calculates to 6.7 litres/100 km.

With a 33-litre fuel tank, the average driving range per tank would be over 400 km.

The 2019 Perodua Axia Style is the charming little hatchback Malaysians know dressed up in crossover outfit. It sits in the middle of the Perodua Axia range and gets the necessary stability control, the convenience of keyless entry and the much adored push start button.

In isolation, the Perodua Axia is all the car one would ever need; spacious, efficient, easy to drive and maneuver. And in the case of the Axia Style, the crossover bits may be visually appealing to some too.​ 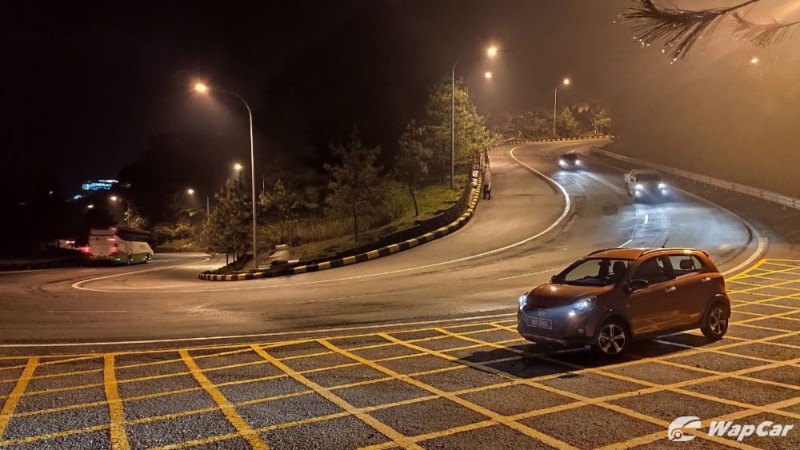 But at RM 38,890, the 2019 Perodua Axia Style is priced really close to the Proton Saga 1.3L Premium at RM 39,800, which has a bigger engine, bigger boot, better driving dynamics and refinement. The Proton Saga just offers better value for money.

Where the Perodua Axia Style trumps are the keyless entry, push start button, and better fuel economy compared to the Proton Saga. There is also the subjective matter of looks and for some, it might one of the deciding factors for putting their money down on the 2019 Perodua Axia Style. And it would be perfectly understandable.​