Home > News > Review: Toyota Yaris – the best of both worlds in 1 interesting package

Review: Toyota Yaris – the best of both worlds in 1 interesting package 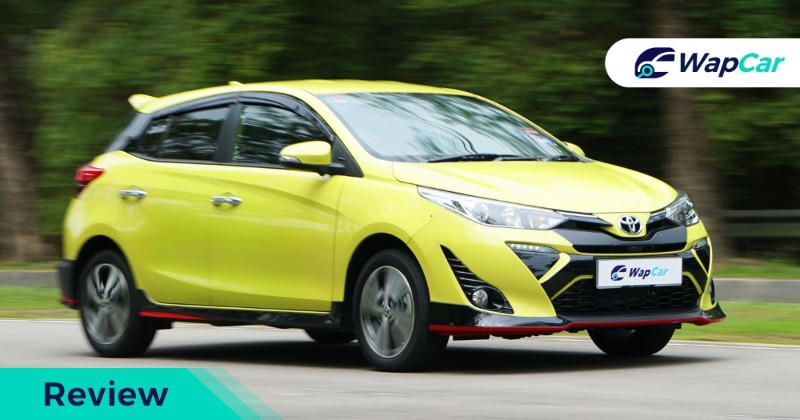 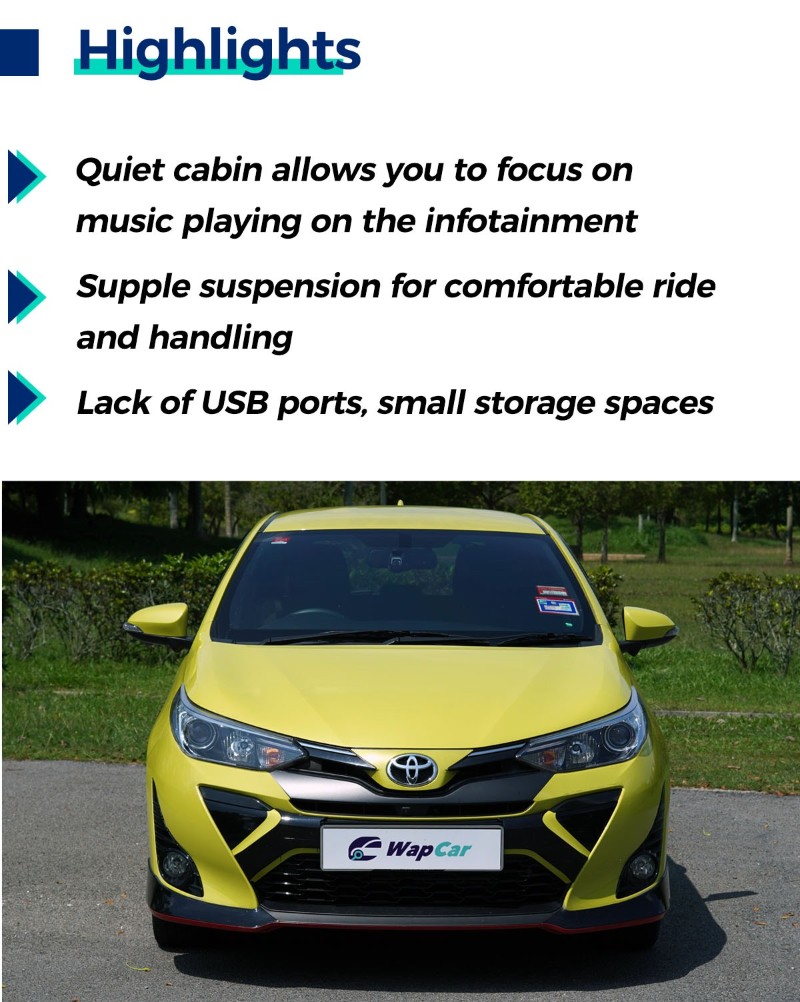 After a long absence from the Malaysian market, the 2019 Toyota Yaris is back to shake up the Honda-Jazz-dominated-segment with a loud bang.

With local artists leading the marketing campaign, it is clear that Toyota is aiming at a fun lifestyle concept rather than a practical daily people mover. 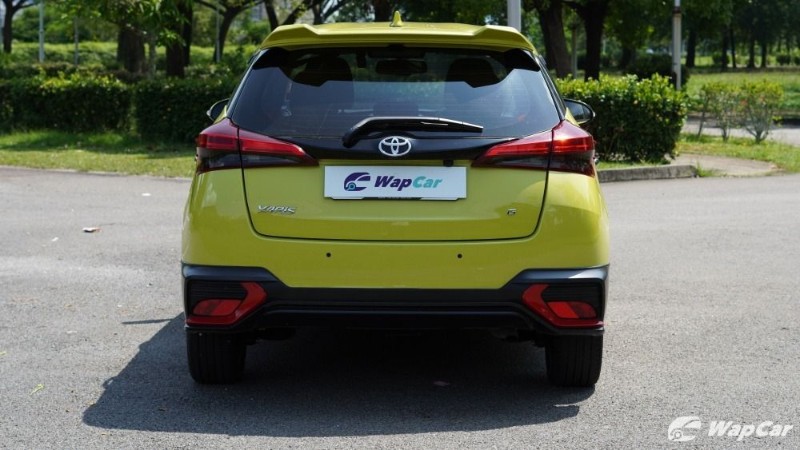 But car enthusiasts flocked to showrooms all the same to rediscover the hatchback, eager to see if the Yaris could live up to the Honda Jazz’s sole domination in the B-segment hatch market.

On paper, the Yaris looks and sounds like the perfect car, with equipment that none of its competitor can present, at a reasonable price of RM 83,888.

But in real world terms, we discovered that the Yaris really does live up to the game. 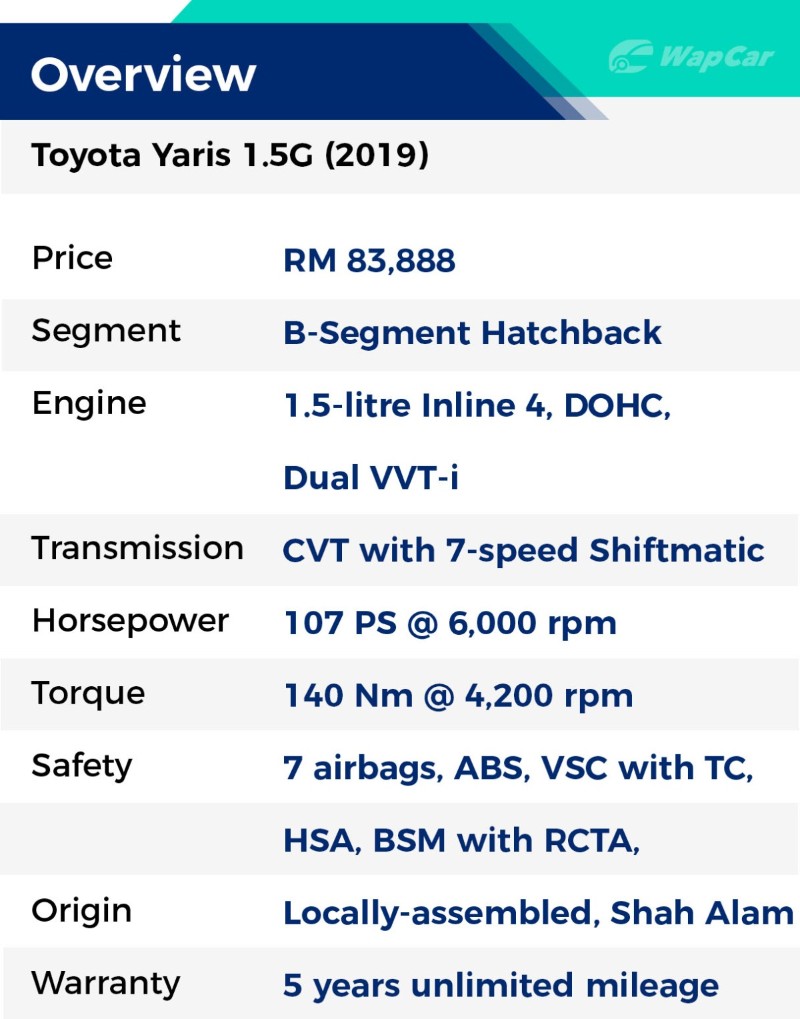 The bulbous second-generation silhouette is no where to be found and in its place are sharp stylish lines that cuts a definite presence for the Yaris on the road. 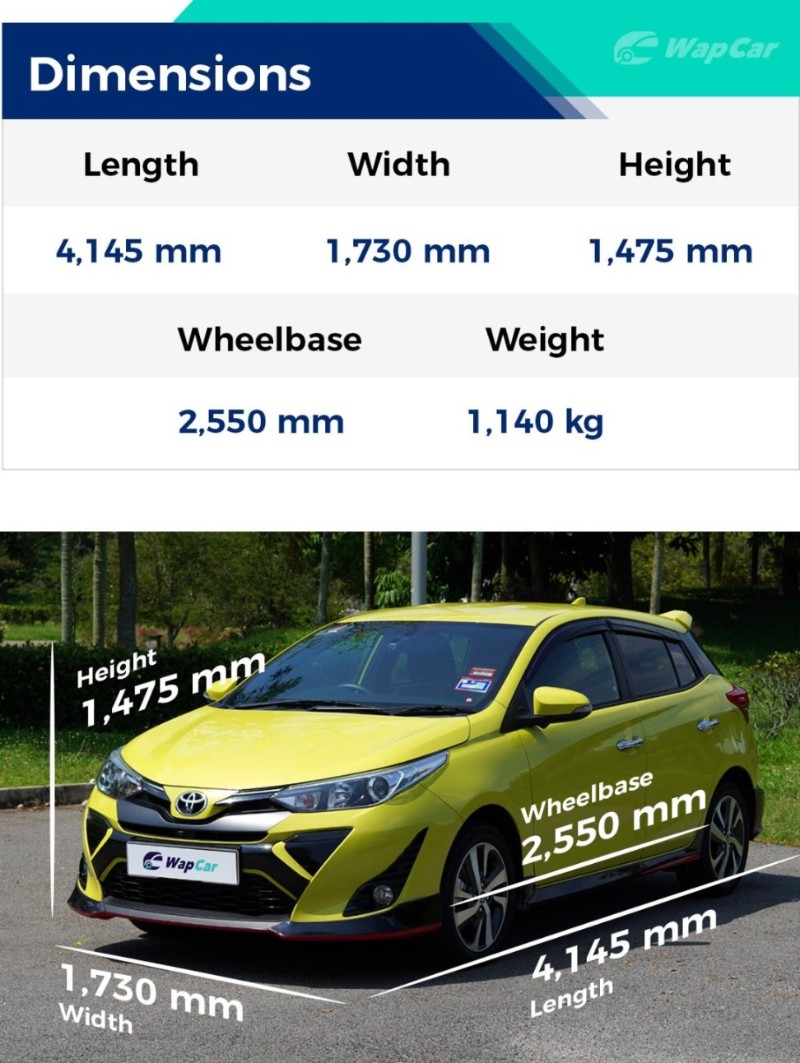 Toyota has gone bold with the colour options for the new Yaris. Not only is there Red Mica Metallic, they also have a Citrus Mica Metallic option. And judging by the amount of bright coloured Yaris on the road, we say that the gamble has paid off.

And why not? The brighter colours better compliment the smoked tail-lights though the black paint option makes the car look sportier.

Toyota also offers the Yaris with an optional Aerokit that includes front and rear bumper spoilers and side skirtings. For the 1.5G and 1.5E variants, a roof spoiler is also available. And the Aerokit makes the Yaris look the best, without it, the car looks decidedly unfinished.

On our test unit, panel gaps range between 6 mm at the widest and 3.5 mm at the narrowest. 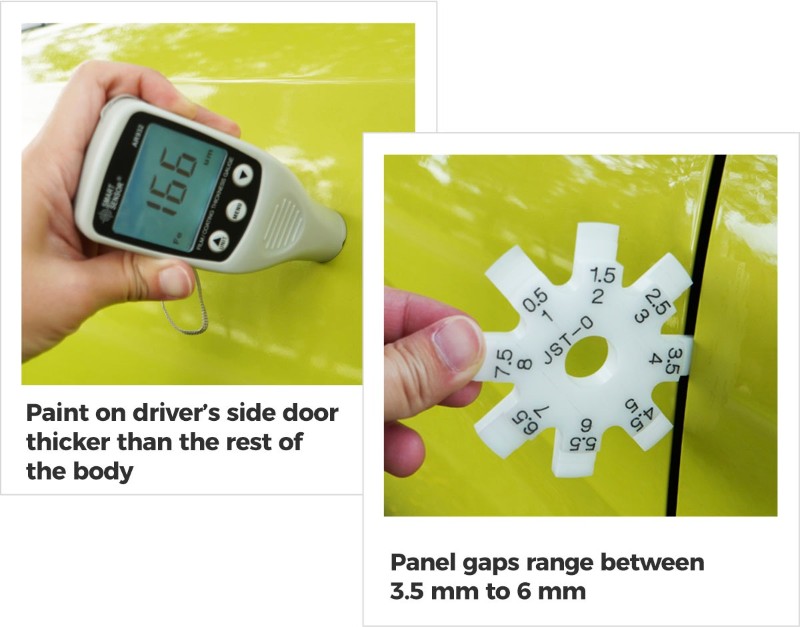 Paint measurements average rather thinly around the 90s um around the car with the anomaly being the doors on the driver’s side measuring in at a little more than 170s um.

The Yaris does not have the most stylish interior if compared to the likes of the Mazda 2. Save for a few silver garnishes scattered across the dashboard, the rest of the cabin is finished in solid black.

The seats are finished in a soft black material with blue stitching to break up the black. Couple the soft seat upholstery and cushions with just the right amount of plush, the Yaris’ cabin has a certain welcoming comfort to it after a long day. 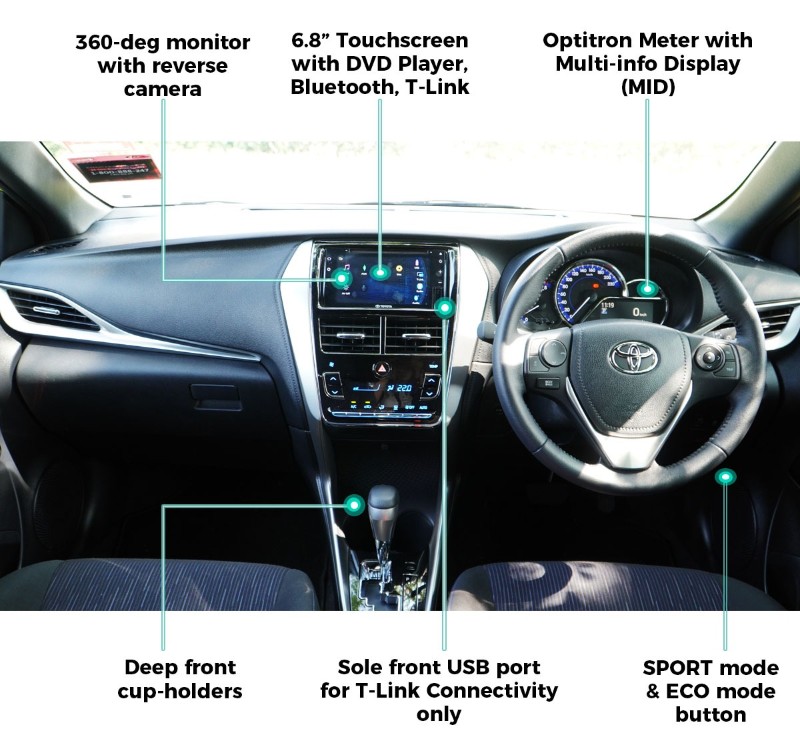 There are just enough cubby spaces in the cabin but one complain about the Yaris’ interior is the small storage compartments.

The centre storage compartment, especially, just properly fits a large sunglass box. And if more items are added inside, items will have to stack on top of each other and you will have to rummage around to find anything.

There is no Android Auto on the Yaris, but the T-Link works well enough to mirror the contents of your phone onto the 6.8-inch touchscreen. But the downside is that T-Link messes up the screen orientation on the phone.

When connected via USB cable and T-Link is running, my Android 9 device was bouncing between landscape and portrait orientation and, in my opinion, defeats the purpose of being able to use your phone functions on the touchscreen. 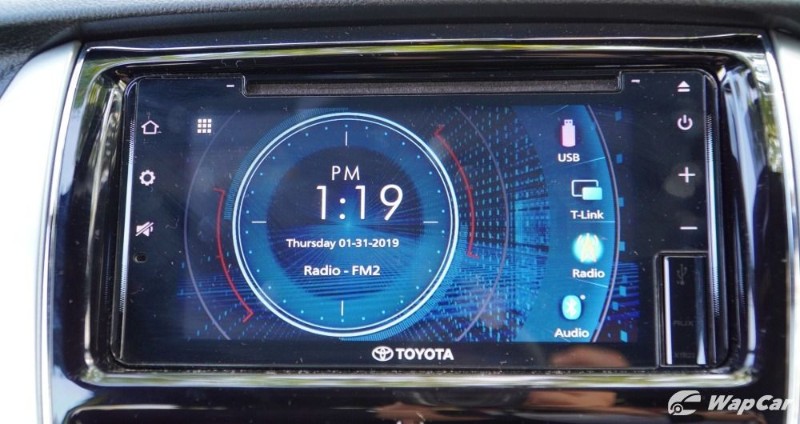 I resolved to making all commands, like setting up the GPS, before connecting my phone to the T-Link. Also, when connected to T-Link, which also requires Bluetooth connection, you are not able to play the radio.

Other than that, the Yaris’ infotainment system is a breeze to use with all its functions ergonomically arranged well for ease of use. 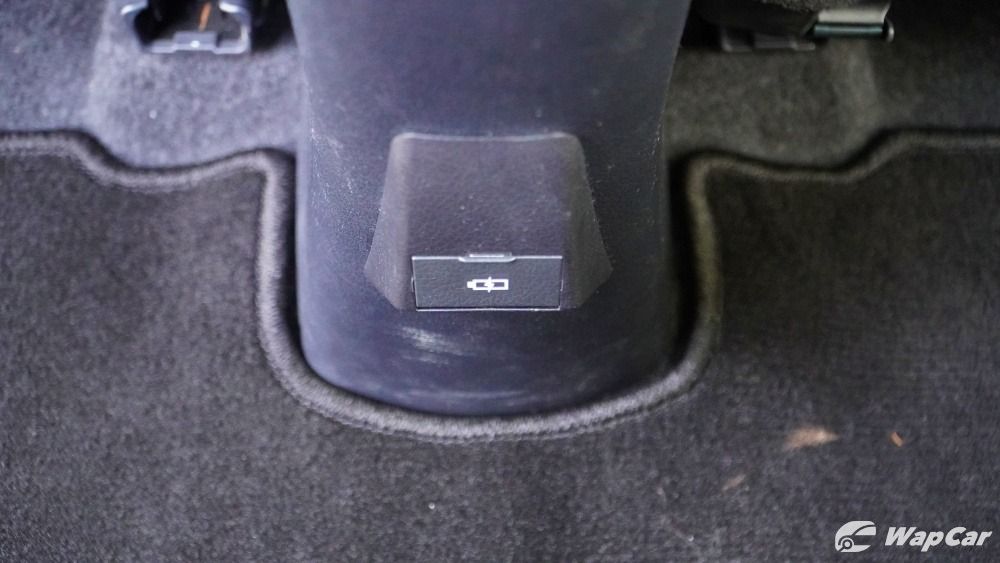 Another thing to note is the Yaris’ lack of USB charging ports. There is only 1 port in the front while the passengers in the rear get 2 charging ports installed on the centre console.

While Toyota claims it’s for front passenger use as well, the ease of use for those 2 ports for those sitting in front are dependent on their cable’s length. 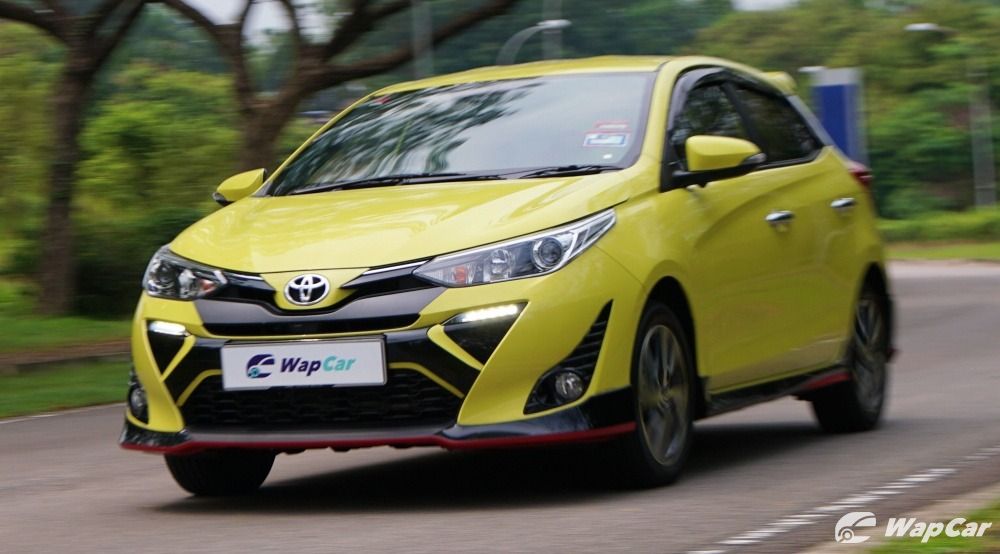 On paper, the Toyota Yaris has the most sedated numbers (107 PS / 140 Nm) amongst the top 3 B-segment hatchback sellers. 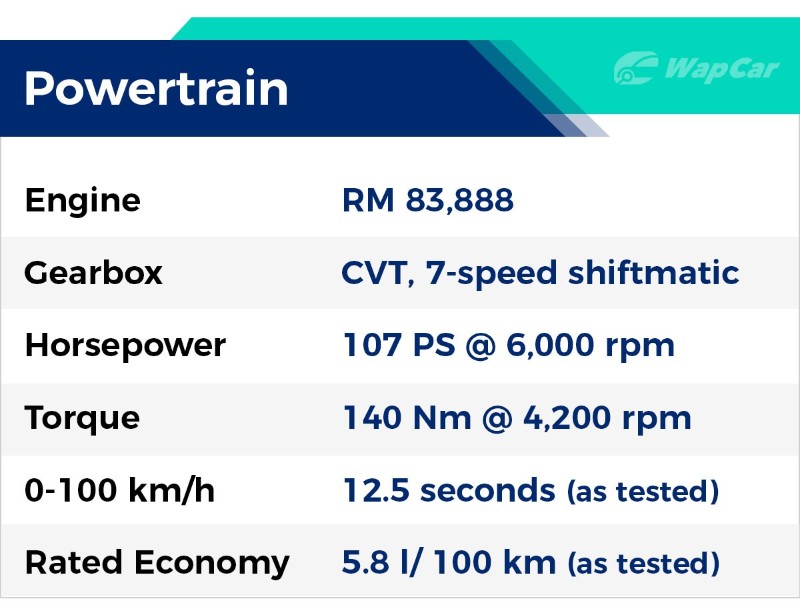 But when driven, the Yaris hardly feels underpowered and has enough push whenever the situation requires it. The good spread of torque gives it a very responsive feel. This helps it drive better than the 107 PS suggests.

Toyotas are well-known for their smooth and quiet CVTs and the new Toyota Yaris is the same. The only time the whine could be heard is when the Yaris is pushed harder than the CVT can react. 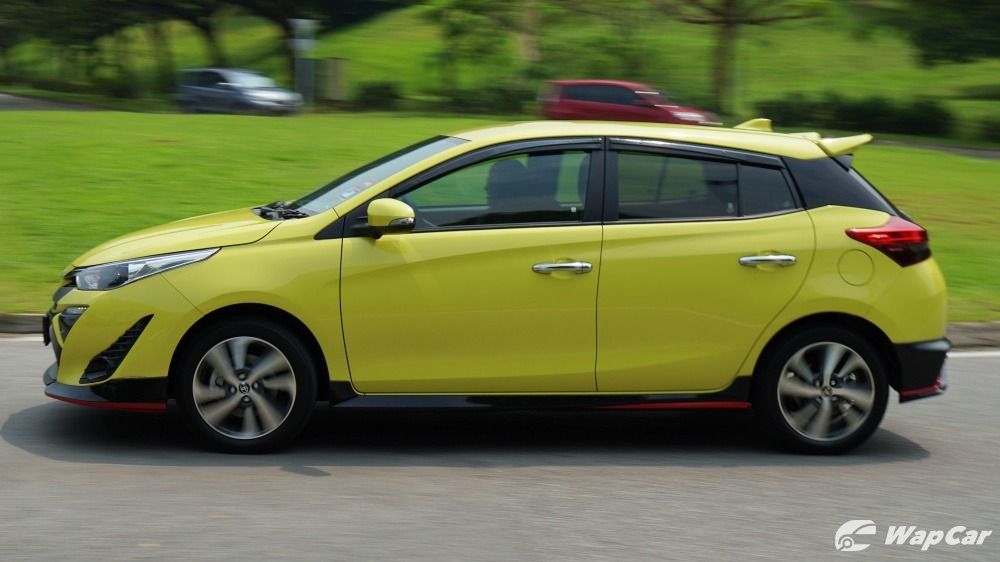 In fact, the Yaris’ CVT is even smoother than the CVT on the Honda Jazz!

The Yaris also has driving modes that switches the engine mapping between Normal, Sport and Eco. 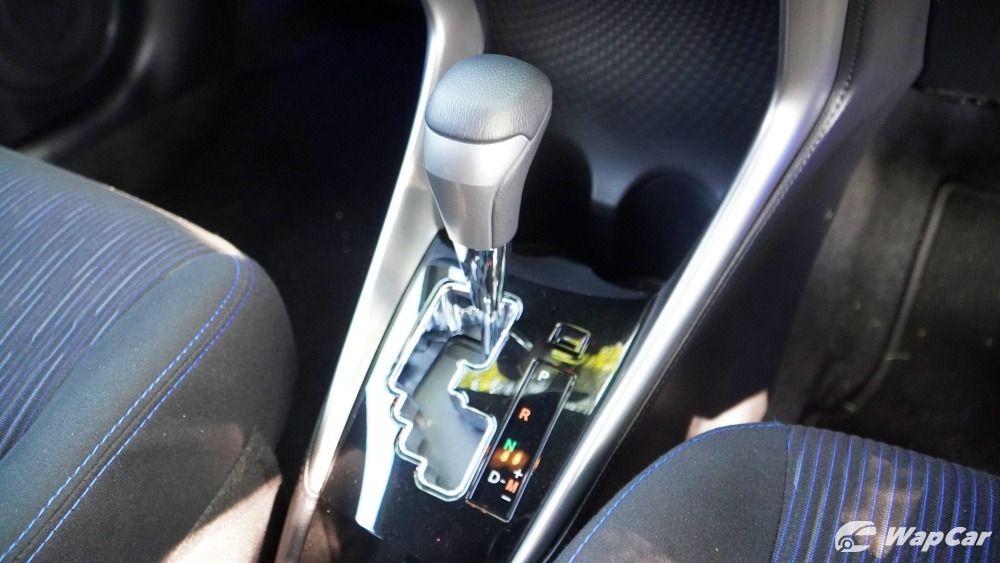 The buttons for the modes are not located at the usual spot beside the gear shift but next to the traction control button and other technical features by the door and driver’s knee.

Handling is weighted just right. It makes driving at low speeds comfortable while at higher speeds, it is easy to keep the car in check. 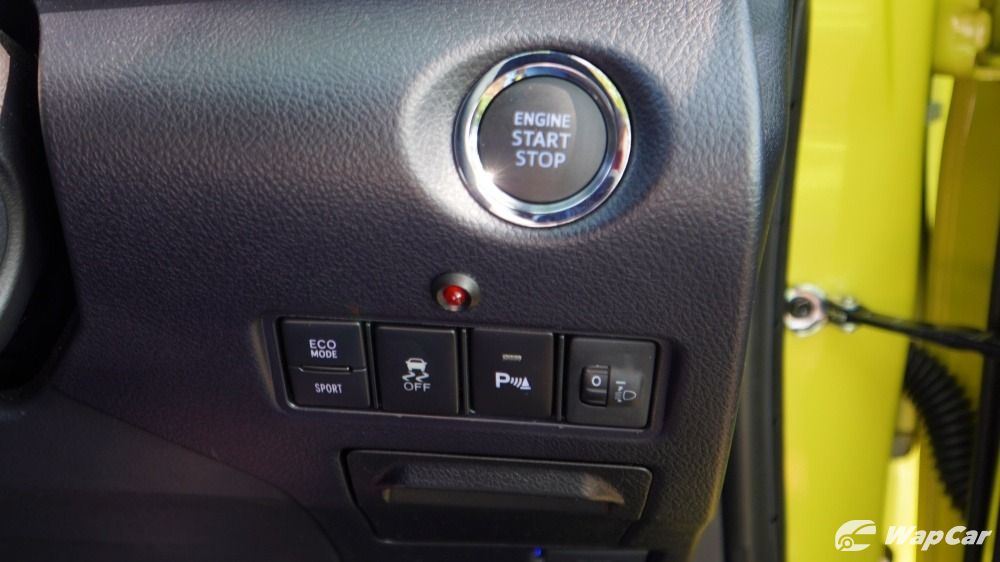 The steering feels lighter than the Honda Jazz but not as corner happy as a Mazda 2. Couple the steering feel with the smooth CVT, the Yaris fits into the niche as the most comfortable city dwelling car. 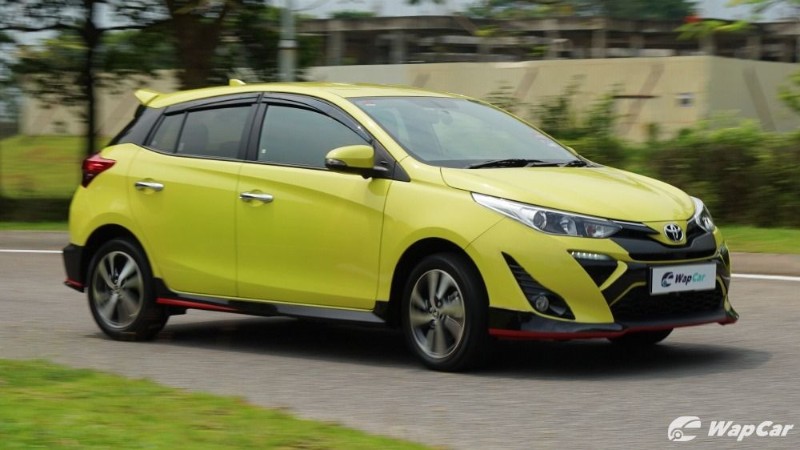 The Yaris has a rather soft suspension that easily irons out uneven road surfaces, that also means that after long hours of driving the car doesn’t give you a headache.

The aforementioned comfort in the Yaris’ interior is complimented by the soft suspension and the supreme quietness. 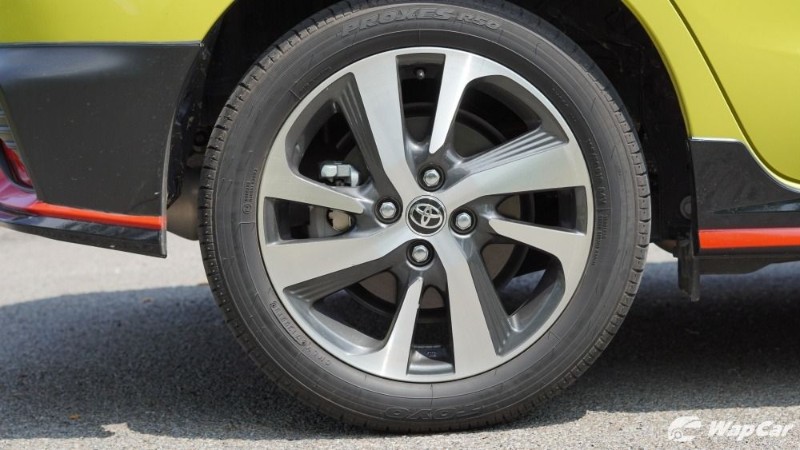 Noise level measurements in uncontrolled environment shows that cruising at 60 km/h the Yaris measures in at 54 decibels while at 90 km/h the interior noise averages at 62 decibels.

Even at cruising speeds of 110 km/h, the Yaris measures in at 68 decibels which is massively quiet compared to its closest competitors. 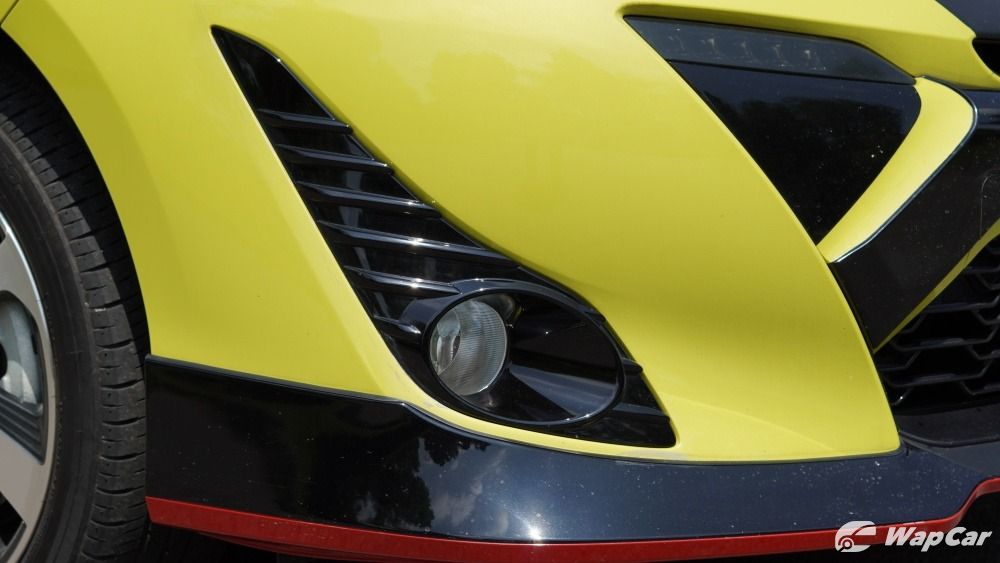 It feels very much like you have been cut off from the world outside with only the sound of your music and occasional roar of the CVT to accompany your drive.

Of course, in terms of space the Yaris loses out massively to the Honda Jazz. A taller person would find rear legroom rather tight, tighter than even the Perodua Myvi. 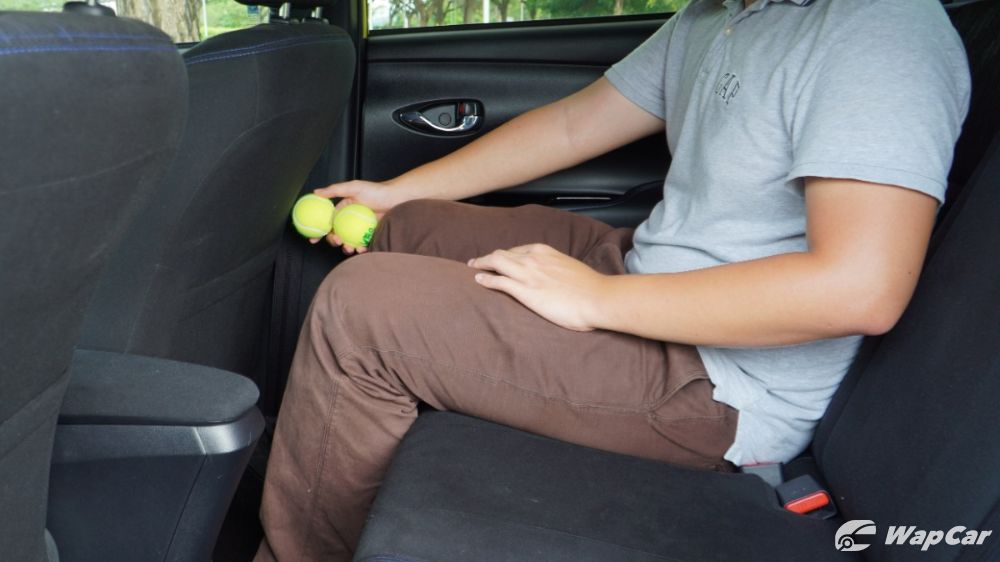 But, at least the Yaris isn’t that much of a squeeze in terms of shoulder room compared to the Jazz. 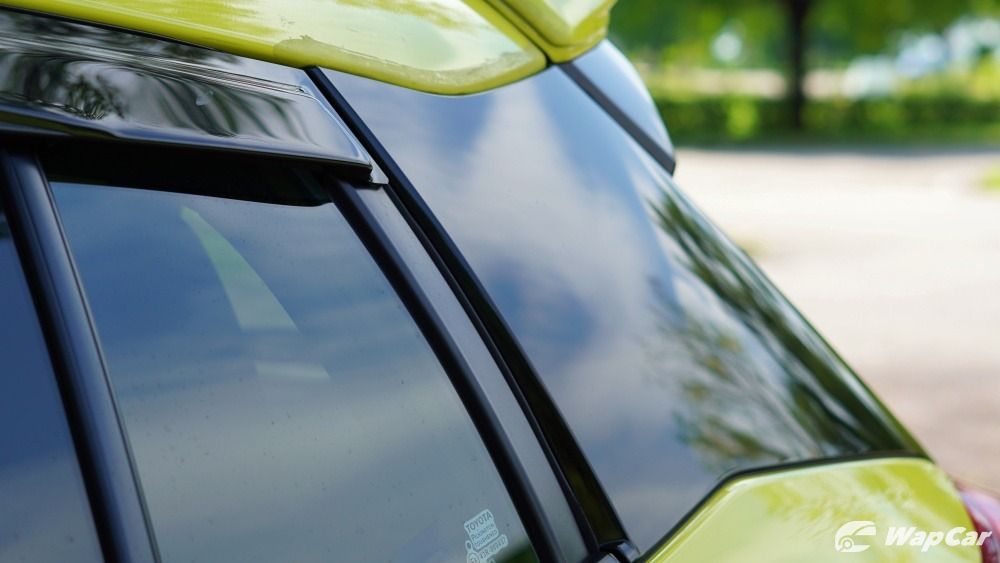 The Yaris returned 5.8 l/ 100 km in a mix of stop-go traffic and highway cruising conditions. Which is really good. Even when judged by this segment's typically fuel sipping standards, the Toyota Yaris is incredibly fuel efficient. 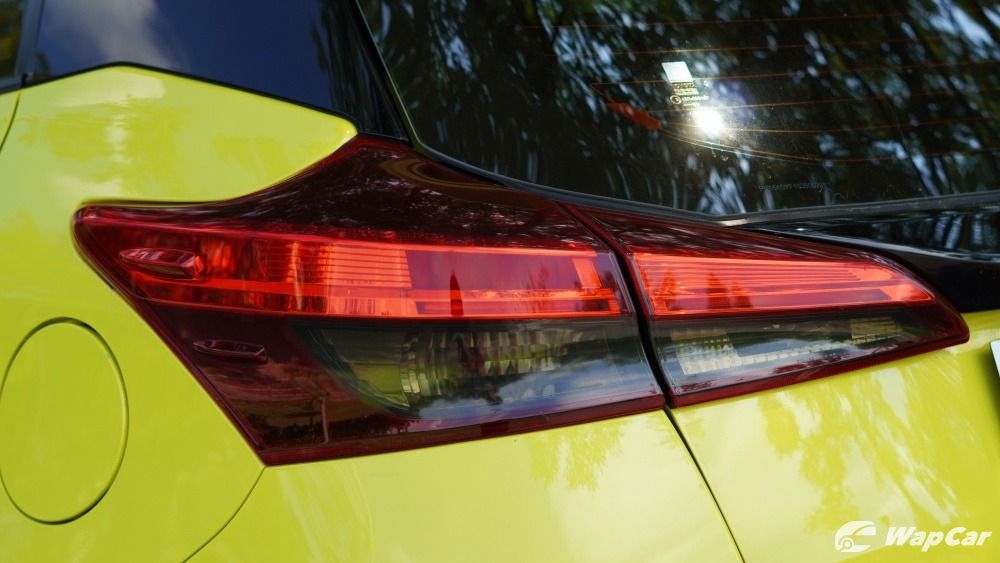 Toyota’s new Yaris is the embodiment of the best of both worlds, it offers a smooth drive that provides a spot of fun from time to time and a comfortable cabin.

The interior might be a little disappointing in terms of the size of storage compartment and the solid colour scheme, but it’s comfortably quiet and has an immersive sound system for further enjoyment. 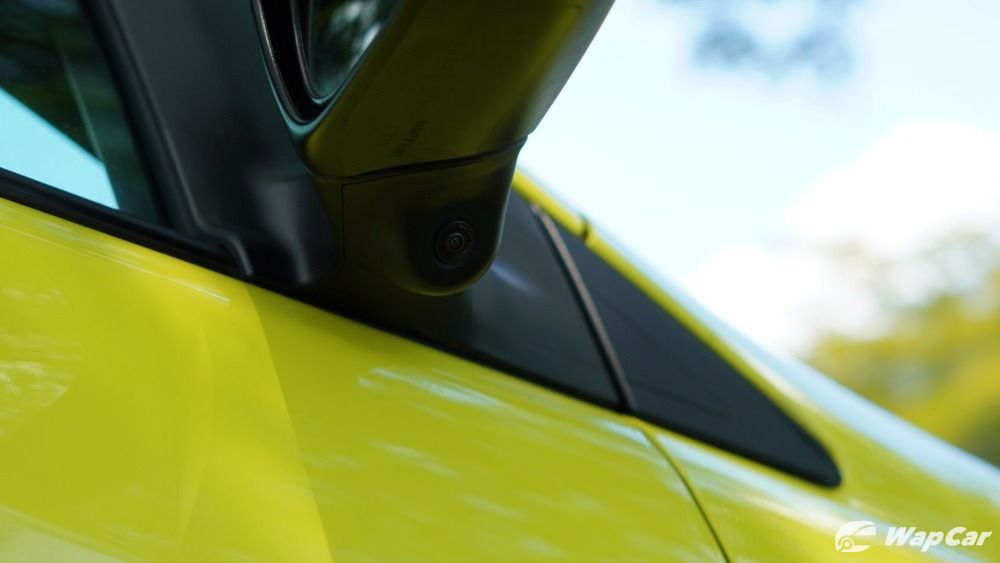 And we haven’t yet delved into the many safety equipment that the Yaris boasts. You get the usual VSC with traction control along with Blind-Spot Monitor – which does not beep incessantly like in the Toyota Vios – coupled with Rear Cross Traffic Alert, and even 360-degree view when reversing.

That’s not the mention the car has 7 airbags, across the variants, 1 more than even the top spec Honda Jazz and 5 more than its lowest. 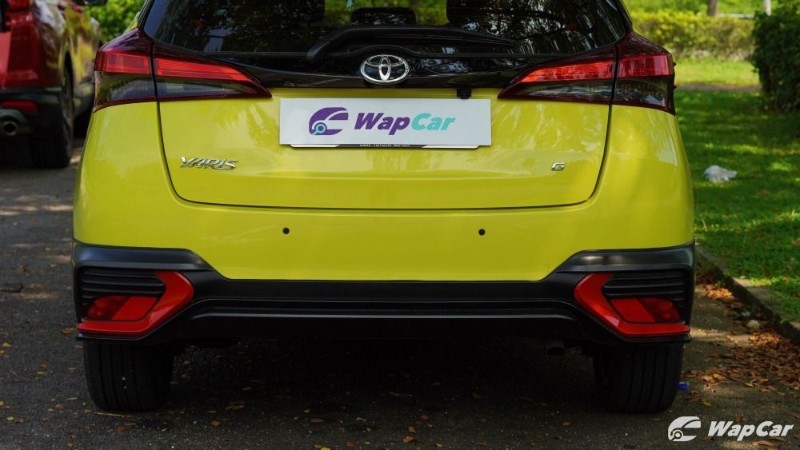 The Honda Jazz had made a roaring entrance back in 2014 and continued its momentum with the facelift currently on sale. But when the Yaris came along in 2019, the Jazz had painfully fallen into the shadows of the Yaris with the features that the Toyota has brought to the table.

Also, when compared to the Perodua Myvi (top spec going at RM 54,090), the Yaris' features doesn't leave you wanting for more, unlike the Jazz.

So, we would say that the Yaris certainly lives up to the perfect car on paper. Now, if only the next update would see Android Auto available as well.