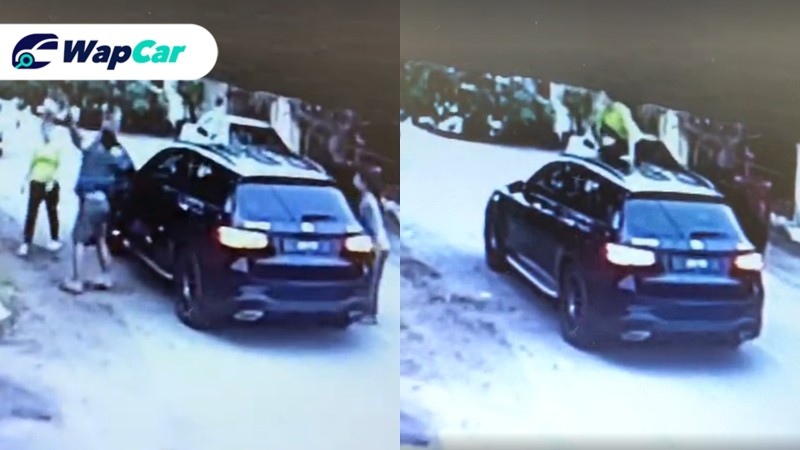 SUVs have a higher ride height so the car can easily go off-roading in a passenger car. But these three aunties made good use of the Mercedes-Benz GLC’s ride height to steal mangoes from a tree outside a residence instead.

CCTV footages of the three cheapskate aunties getting out of a GLC to steal mangoes have been going viral. From the first video, a yellow shirt auntie was seen jumping out of the SUV before reaching up and snagging a low hanging mango already wrapped in newspaper.

The second video showed the same GLC returning, but this time, 3 aunties climbed out of the car and started attacking all the mangoes on the tree. The yellow shirt auntie was even seen climbing dangerously onto the roof of the SUV to reach the mangoes hanging higher up.

According to a Says interview with the resident of the house the mango tree sits in front of, the aunties only seized and drove off after the residents have shouted at them.

While the resident understands that the mango tree sits outside of a house compound so it technically doesn’t belong to them.

But they did spend hours under the hot sun working to wrap the mangoes up in newspaper so the fruits would not get damaged by animals so a little courtesy by asking would be nice.

Of course, this has opened the driver auntie up to many other criticisms for being a cheapskate though she owns a Mercedes-Benz.

But for us, we’re more in horror of the fact that the auntie, not only climbed to the top of the SUV but even stood up on the roof just to pluck mangoes.

FYI, the roofs of cars are not flat, they slope and there are grooves in the roof that you can easily trip over if you aren’t paying attention. So, please, even if there is expensive jewellery on a tree, do not climb onto the roof of your car.