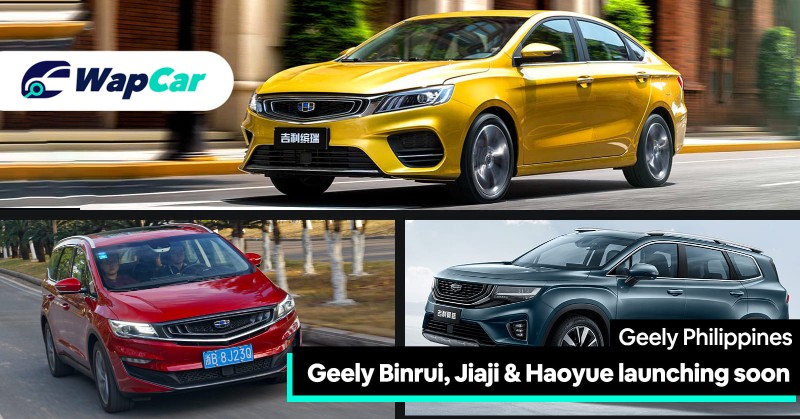 Geely will be launching the Geely Jiaji, Geely Binrui, and Geely Haoyue in the Philippines according to a teaser their official website.

The silhouettes shown on Geely Philippines' website are easy guesses as told from the distinct body style – an MPV (Jiaji), sedan (Binrui), and large SUV (Haoyue).

These cars would allow Geely to cover different body segments in the Philippines and appeal to a wider customer group.

Geely entered the Philippines market in late 2019 with the market debut of the Geely Coolray (Geely Binyue/Proton X50) and subsequently launched the Geely Azkarra (Geely Boyue Pro) in March 2020.

Being an international market outside of China, these cars will bear a new model name just like the Coolray and Azkarra. Geely thinks having an ‘English name’ would be more appealing for its international audience.

Currently, the Philippines is also on lockdown due to the Covid-19 global pandemic, but their Government is looking to gradually loosen the lockdown to jumpstart the economy. Hence, it is possible for Geely Philippines to launch these cars by the end of 2020.

Before you go screaming at Proton for their ‘slow introduction’ of the Proton X50 and the Jiaji-based Proton MPV, remember that the Philippines market is a left-hand drive market and are through and through Geely cars.

For Geely-based Proton models, it requires longer research and development lead time for the right-hand drive conversion as well as injecting Proton’s unique design flair to these cars.

While Proton has kept us waiting for the X50 and MPV, the wait is always well worth it as seen in the Proton X70 CKD (locally assembled) which had better ride and handling as a result from Proton’s inputs.