Honda BR-V vs Perodua Aruz; Comfort over gadgets? Or gadgets over comfort? 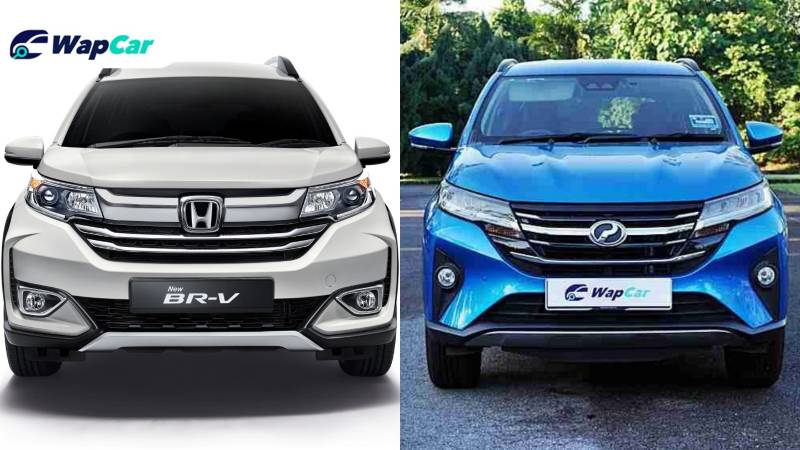 We’ve pitted the Perodua Aruz and Honda BR-V against each other many times. But we didn’t think it was entirely fair that we were comparing the BR-V that was launched in 2016 against the 2019 Perodua Aruz and its modern amenities.

Now that Honda Malaysia has launched the facelifted 2020 Honda BR-V, we can’t help but put the two cars side by side once again. 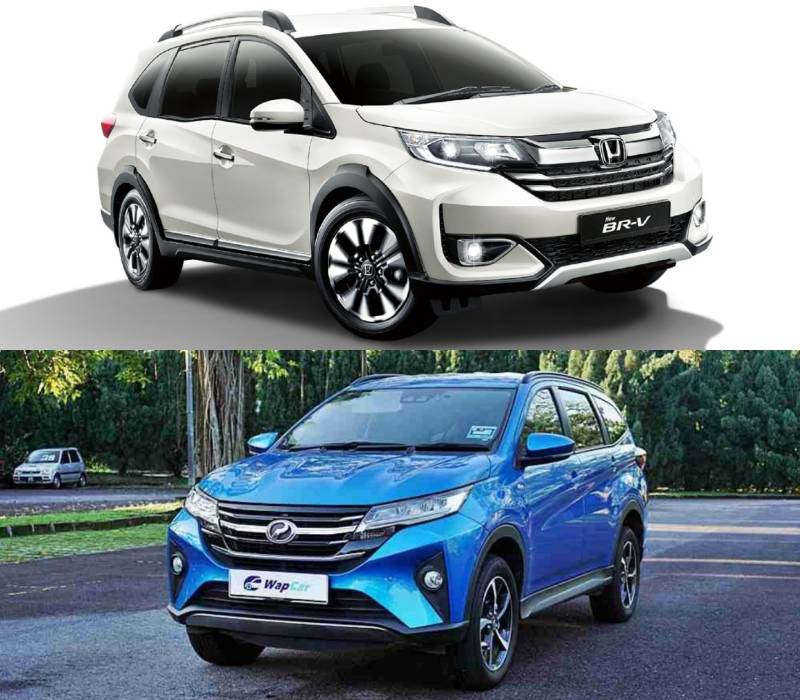 Unfortunately, the Honda BR-V was not immune to Honda’s recent price hike as well. The new BR-V is now at least RM 9,000 more expensive than the pre-facelift. 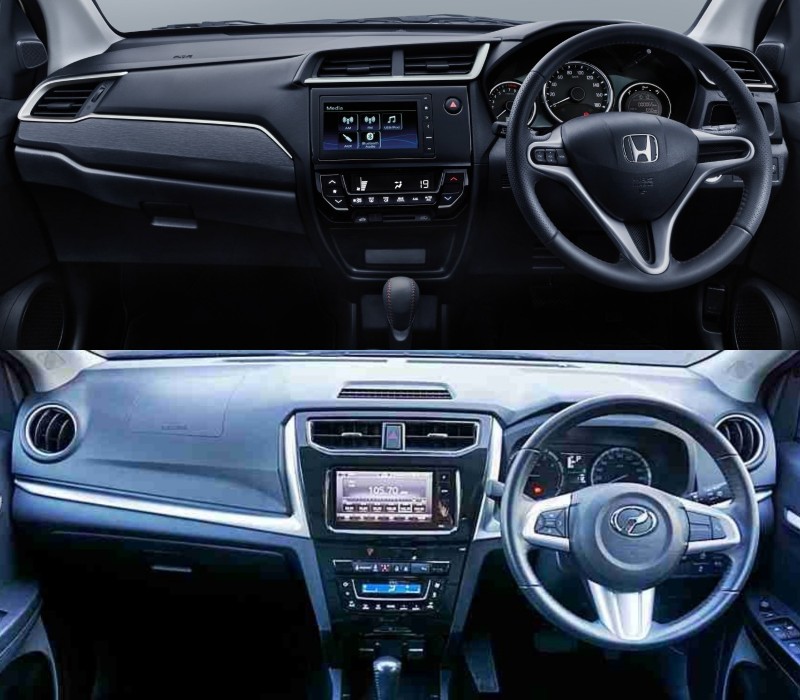 The facelift BR-V came with red-stitching and red trims to relieve the sea of black in the interior. So, in terms of interior space, the BR-V wins out on the interior race in both style and practicality.

Honda has always made light that the BR-V’s interior boasts 11 cup holders for all cups and bottles of different sizes. The Aruz, meanwhile, has a countable 6 cup holders and none of them can fit a larger 750 ml bottle.

But the Aruz’s interior is not entirely a bore, you still get leather seats on all variants and the convenience of the built-in toll reader. 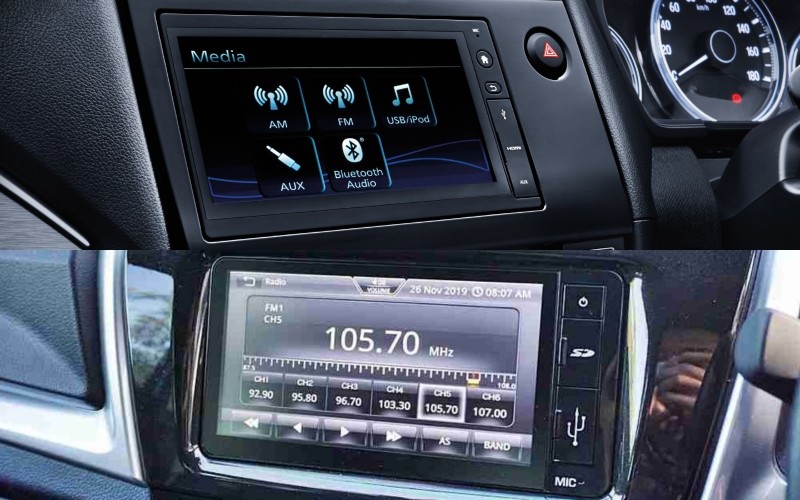 In terms of infotainment, the Aruz still wins out. The range-topping Aruz’s 7-inch touchscreen multimedia system has built-in navigation that even informs you of the toll fee and has Smartlink function for Android phones.

The BR-V makes do with just Bluetooth and use of a hands-free phone function. Even though both cars don’t support Android Auto and Apple CarPlay connections, it is still safe to say the Aruz trumps the BR-V in this area. 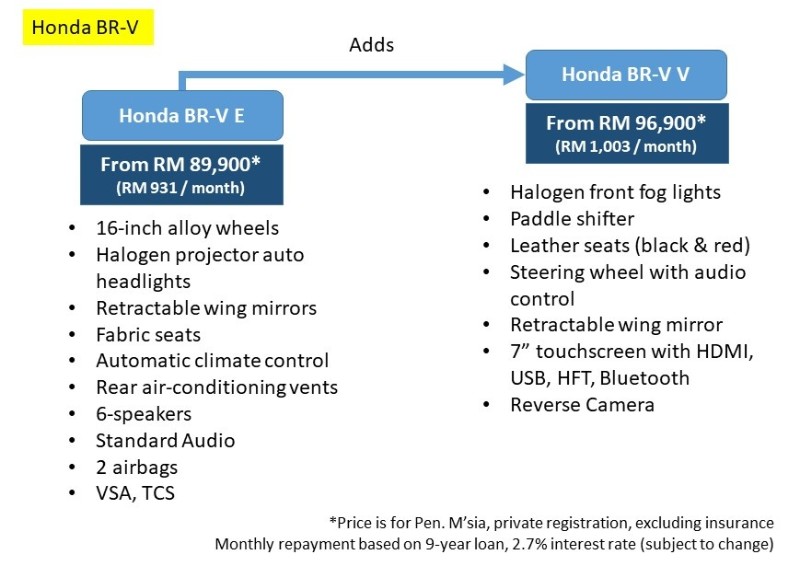 Unfortunately for the BR-V, even though the car was recently refreshed, the facelift did not come with any additional safety features from the outgoing model. 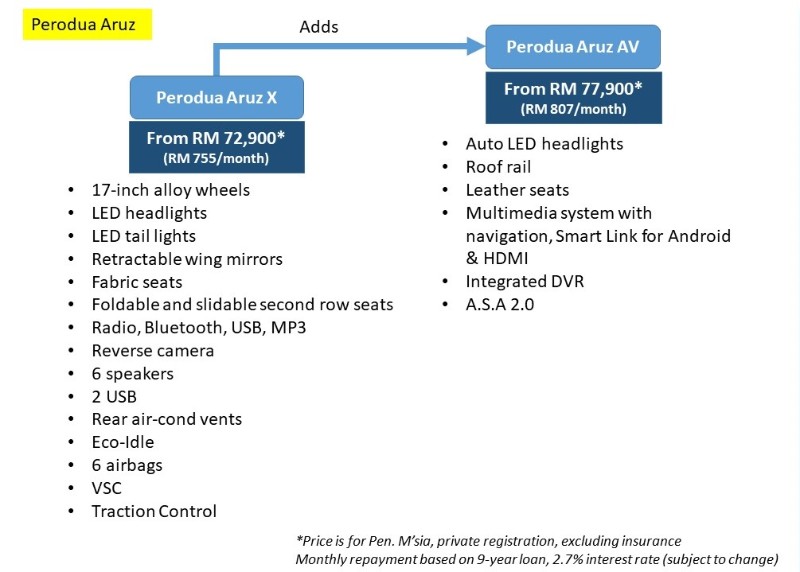 Meanwhile, the Perodua Aruz’s A.S.A 2.0 alone puts the SUV miles ahead of the BR-V. The A.S.A 2.0 encompasses 4 safety systems that include Pre-collision Warning, Pre-collision Braking, Front Departure Alert, and even Pedal Misoperation Control.

The Aruz further trumps the BR-V with 6 airbags and a built-in DVR to add on to the Vehicle Stability Control (VSC), Traction Control that comes as standard in the car. 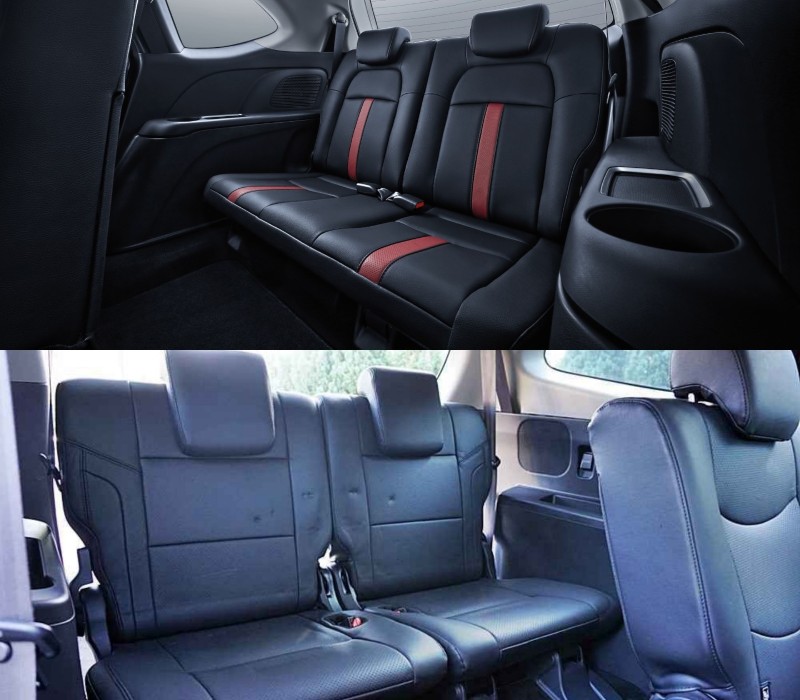 No doubt this is where the BR-V shines through. Unfortunately, the Aruz’s ladder frame structure is just not the best set-up for comfort. Also, third-row passengers in the Aruz will have just enough legroom. So, you can say that the third-row seats in the Aruz are more suitable for children. 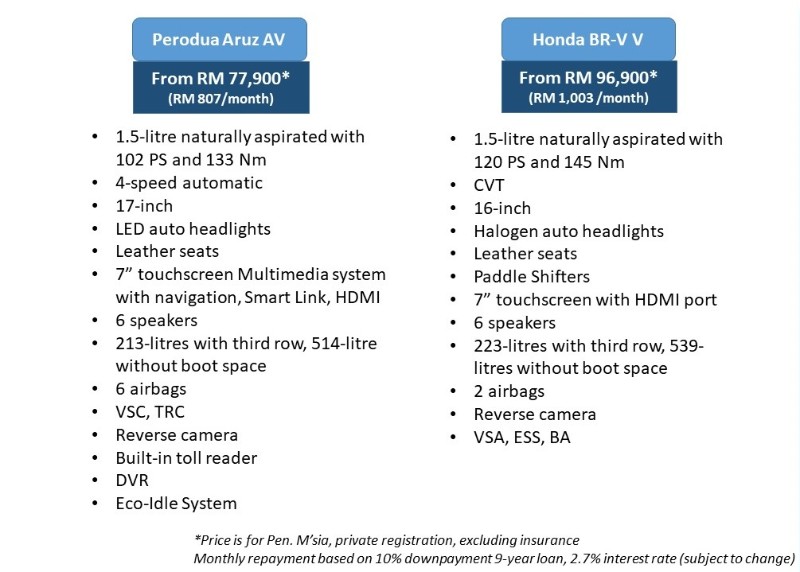 Meanwhile, the BR-V’s underpinnings are derived from a sedan and hatchback. And Honda designers have added their design magic to make sure passengers in every row has more than enough legroom.

Ingress and egress are also much easier in the BR-V. So, if you have senior family members with less flexibility, the BR-V will be more suitable for them to get in and out of. 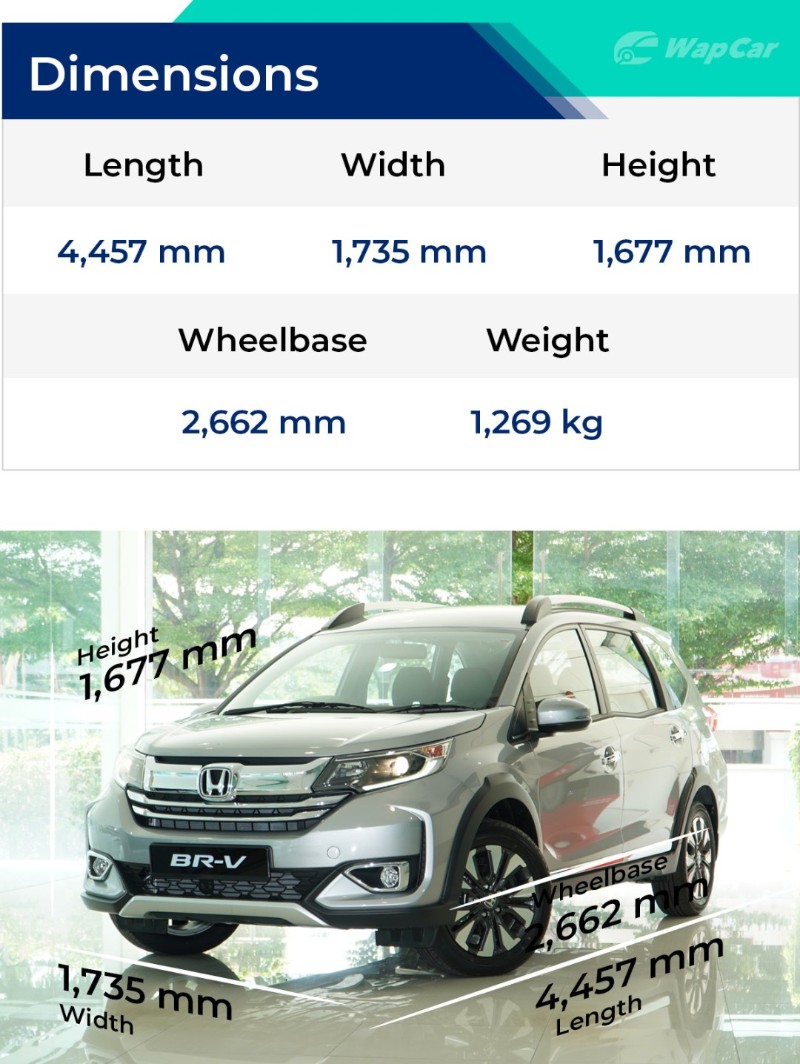 The Aruz is essentially a Toyota Avanza underneath. Both cars are powered by a 2NR-VE 1.5-litre Dual VVT-i petrol engine that produces 102 PS and 133 Nm of torque. Just barely enough to give the Aruz the push it needs.

The output number on the Aruz is significantly less than the BR-V’s 1.5-litre SOHC i-VTEC engine’s 120 PS and 145 Nm. 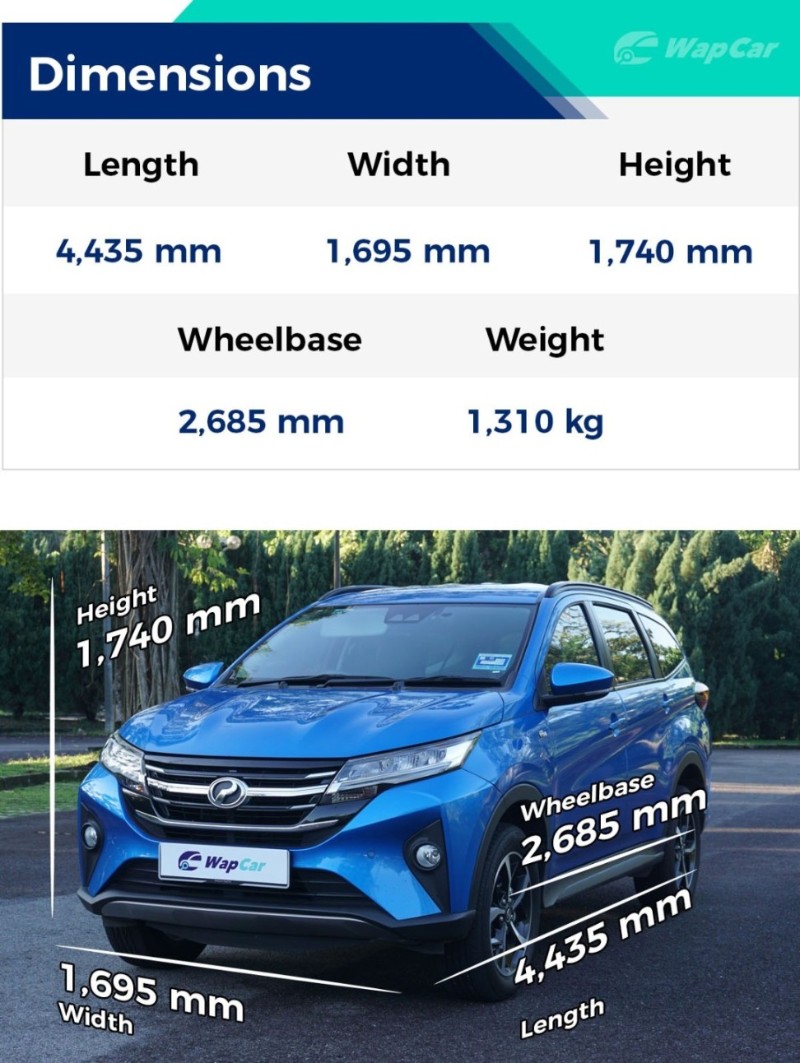 The BR-V’s CVT also gives the car a much smoother drive and better fuel efficiency over the Aruz.

And because the BR-V’s underpinnings are derived from a sedan/hatchback, the BR-V also has the advantage of handling like a long sedan. The Aruz, on the other hand, gives you the bulky heavy handling typical for larger SUVs.