HomeNewsJackie Chan once redesigned a Mitsubishi Lancer Evo, how did this weird partnership begin?

Jackie Chan once redesigned a Mitsubishi Lancer Evo, how did this weird partnership begin? 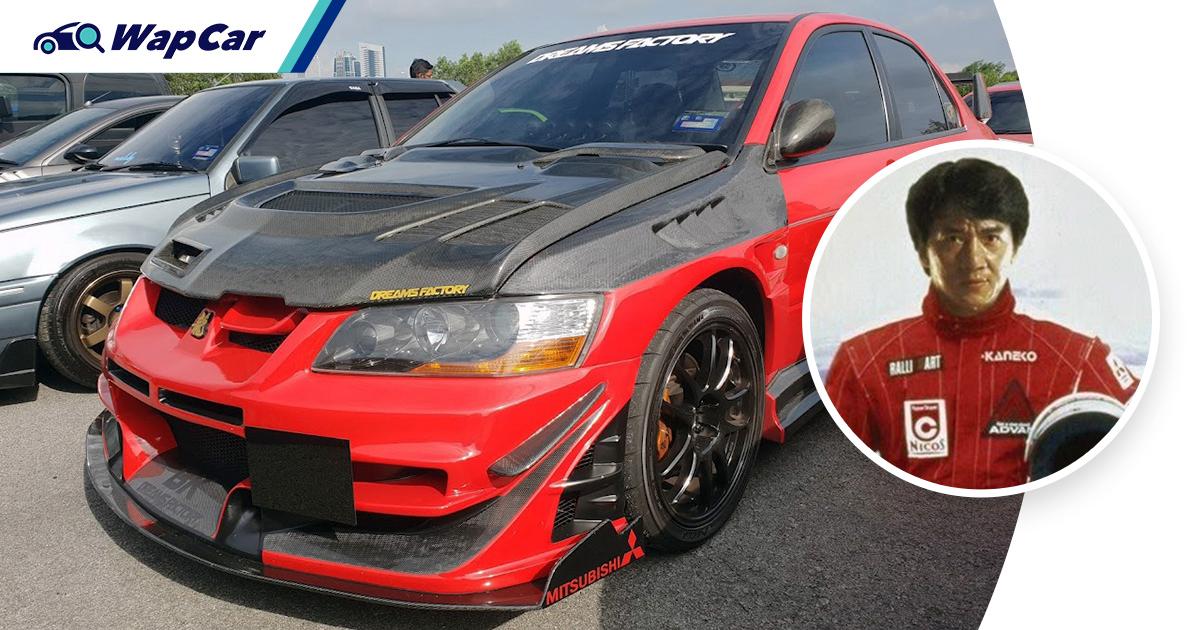 It's not uncommon to see celebrities being used as spokespersons for some cars. However, rarely do celebrities get a chance to be involved in producing a car unless they have a motorsports pedigree. 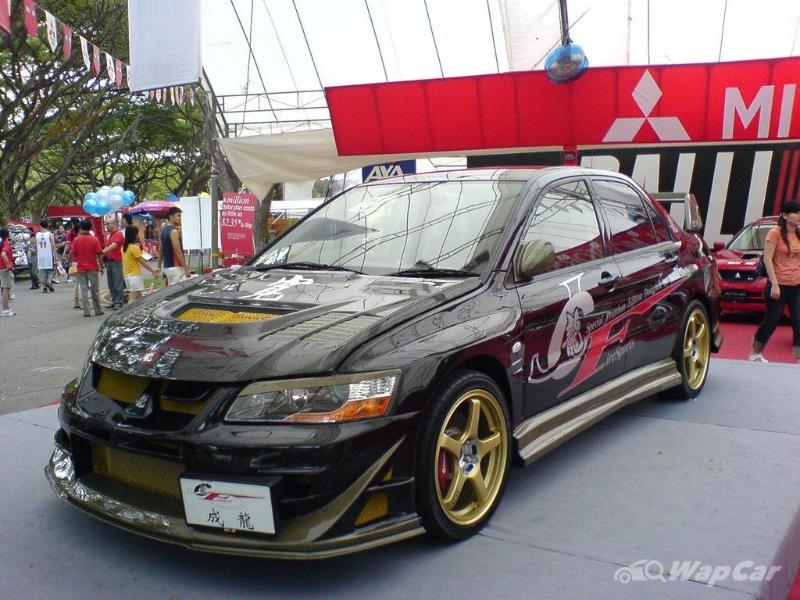 Which makes this special Mitsubishi Lancer Evolution really unique because it's called the Lancer Evolution IX Jackie Chan Special Edition. As you can see it's wild but how did this collaboration happened? 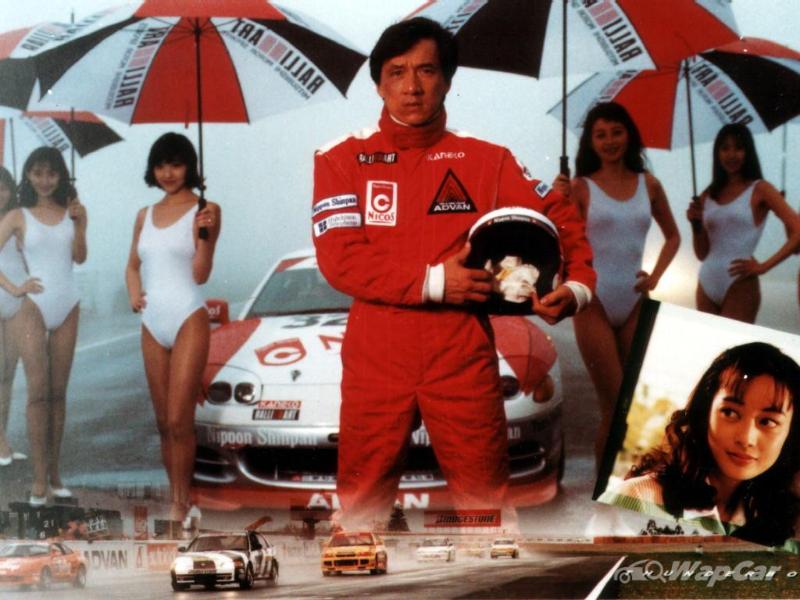 Although some ardent fans of the action superstar might point out his 1995 film, Thunderbolt as a 110-minute Mitsubishi commercial, the partnership with the Three Diamonds actually began a decade and a half earlier, ironically in a Subaru.

In the 1981 Hollywood classic, The Cannonball Run, Jackie Chan was featured in a cameo appearance alongside comedian Michael Hui as a team of racers. In the titular race, the duo competed in a Subaru GL hatchback with a rocket booster engine. 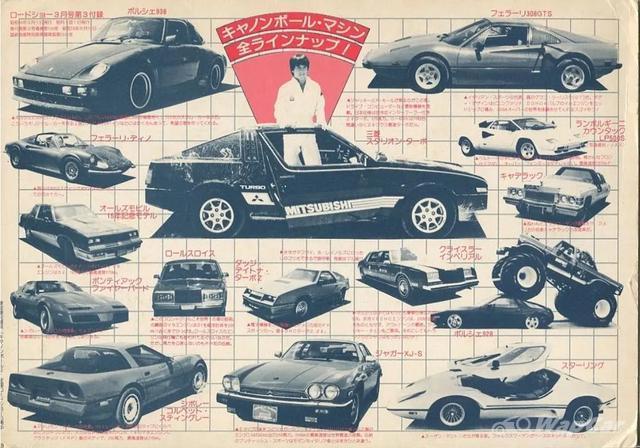 Around this time, Jackie was quickly making a name for himself in Hong Kong as the next big action star and many companies sought endorsements from him. One of them was Mitsubishi which signed a deal with him in the late 1970s.

Mitsubishi helped to finance some of the films made, and a lot of them became cult classics. This solidified Jackie’s name as one of the biggest faces of Asian cinema in the 1980s. 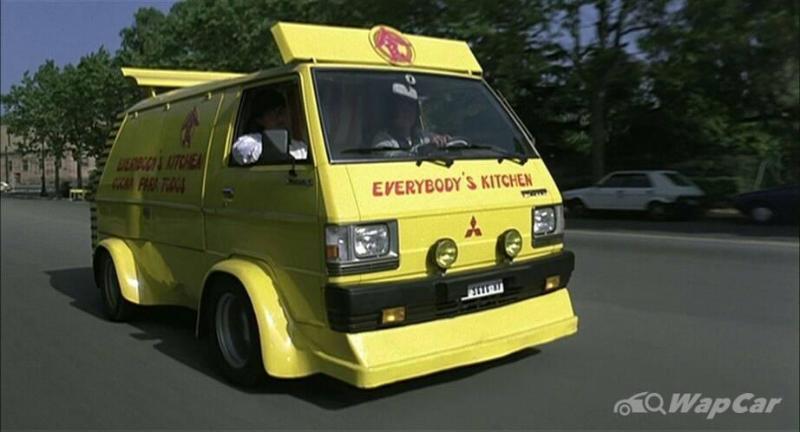 Aside from sponsoring them, Mitsubishi also offered some of its models to be portrayed in Jackie’s films. One of the earliest movies to feature a Mitsubishi model in a prominent role was 1984’s Wheels on Meals.

In the film, Jackie Chan and Sammo Hung were portrayed as cousins running a fast-food van in Barcelona. The van that was used was a Mitsubishi L300 and though it was souped up with a large spoiler in the front and back as well as wide wheelarches, the van was high-tech with its own video screen. 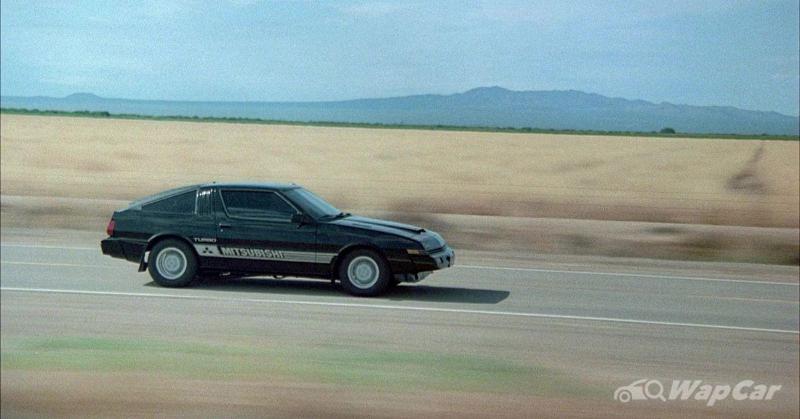 In the same year, the sequel to The Cannonball Run was released and once again it featured Jackie, but this time he traded-in the Subaru hatchback for a Mitsubishi Starion and a new driver partner in the form of 218-cm tall Richard Kiel (a.k.a Jaws from the James Bond films).

Cast as a literal Mitsubishi engineer, Jackie was seen as the brains behind the tech-laden Starion. In the film, the car was equipped with a rocket afterburner, a talking computer, and can be turned into a submarine, with the wheels still attached.

“I need a Mitsubishi now!” 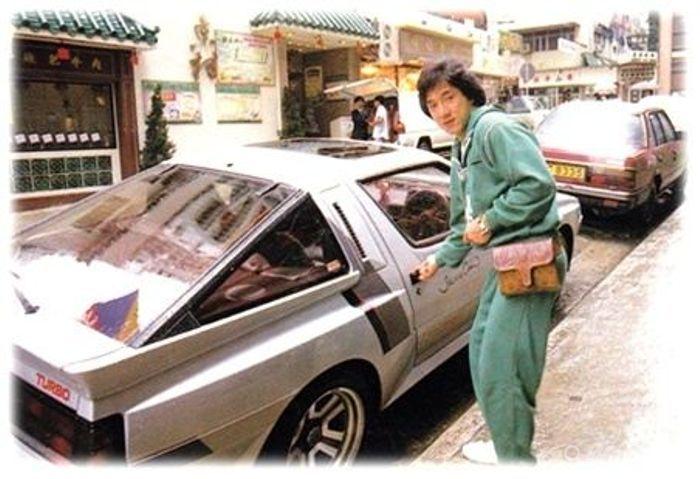 Speaking of the Starion, Mitsubishi also offered a special customised version of the Starion Turbo exclusively for Jackie. This would be among the first Jackie Chan special models offered by Mitsubishi as a gift.

The customised Starion featured a turbocharged 2.0-litre 4G63 engine that was tuned by HKS, his signature on the doors as well as a four-spoke steering wheel with a special plaque on it. 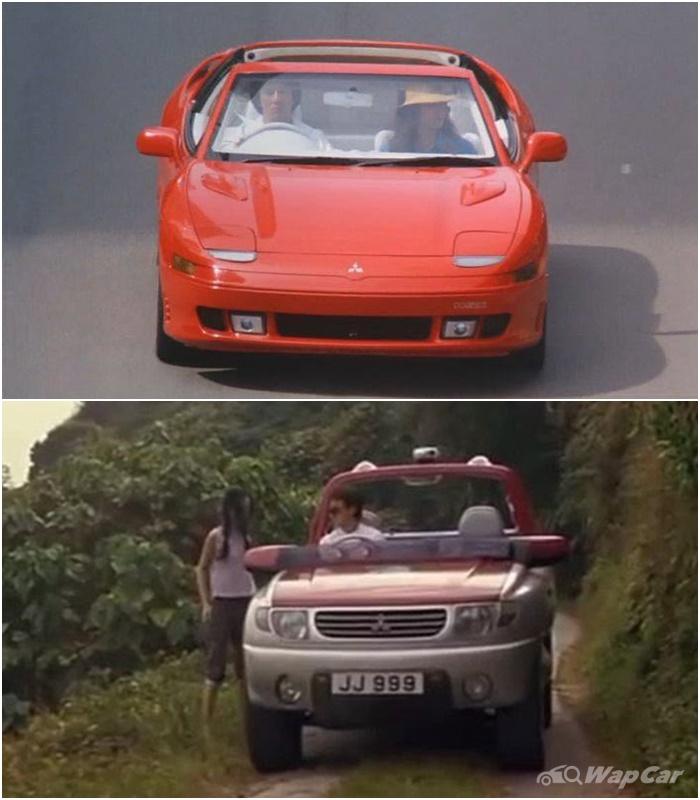 Jackie’s relationship with Mitsubishi during his peak also saw him utilising some concept cars and prototypes in some of his movies. Aside from the weird Mirage Spyder in the 1986 film, Armour of God, Mitsubishi also provided the HSX concept (a GTO prototype) for the 1993 film, City Hunter and the Pajero-based Field Guard amphibious off-roader concept in the 1999 film, Gorgeous.

On an interesting side note, the film City Hunter featured a scene in which Jackie played Street Fighter. Due to Mitsubishi’s rivalry with Honda, the name was changed to E. Honde from E. Honda. 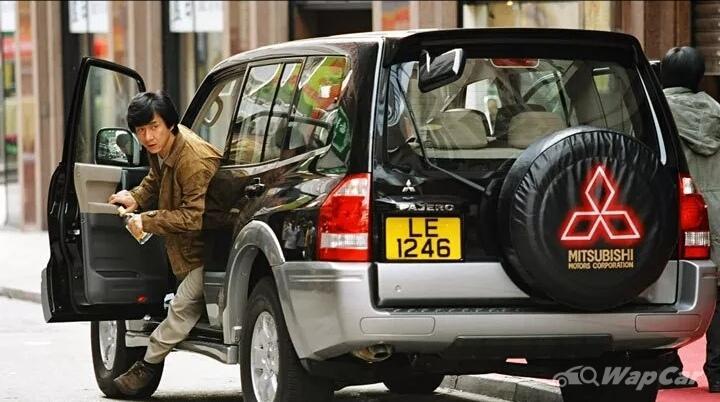 Jackie was quoted in his blog from around 2007 that he had a very good relationship with Mitsubishi. This was to the point that while filming The Forbidden Kingdom in China, he requested for a Mitsubishi Pajero for him and his stunt crew and the company obliged. The Pajero ended up being his favourite SUV and Mitsubishi model ever, calling it the “King of SUVs”. 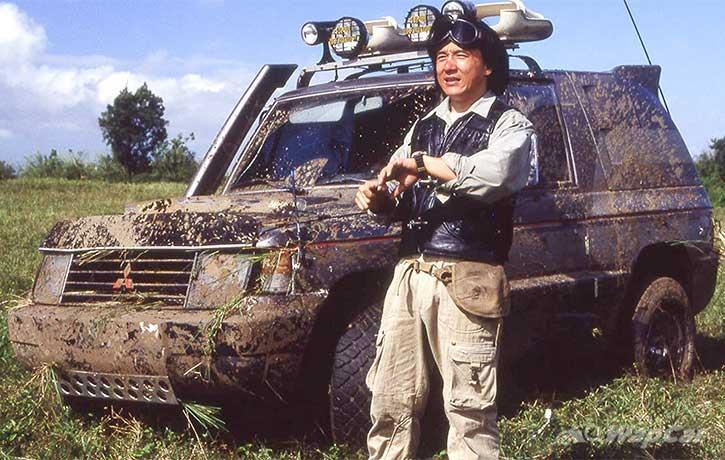 A customised Pajero was even made for his 1991 film, Armour of God 2: Operation Condor. In the film, a Pajero was extensively modified in stealth black and silver with a Batmobile-style spoiler on the roof and a dirt bike attached on the rear. Perhaps this was the inspiration behind the wild Mitsubishi Pajero Evolution that would be launched a few years later?

Of course, an article about Jackie’s partnership with Mitsubishi won’t be complete without the mention of Thunderbolt. It’s a pretty great action film that involved cars and probably more exciting than the latest Fast and Furious film.

The film was famous for portraying a red and silver Mitsubishi GTO in the penultimate race but besides the legendary sports car, a Mitsubishi FTO and a Lancer Evo III were also shown as the hero cars. Some of the track scenes were also apparently shot at the now defunct Batu Tiga Circuit.

Also read: Stuck at home during MCO? Here’s a list of awesome car movies to binge on!

Another film that saw extensive use of Mitsubishis in the same period was Who Am I? from 1998. Aside from the shots of Jackie as a rally driver in a Mitsubishi Pajero, the film’s most memorable moment was the car chase between Jackie’s Lancer Evo IV and a group of thugs in BMW E36s in the streets of Johannesburg.

As much as some people would recognise Jackie’s talents on screen and maybe in the recording studio, his taste for cars were mostly decent. He kept some of the cars used in the film for his private collection even though he could literally just call up Mitsubishi to have a car delivered to him. 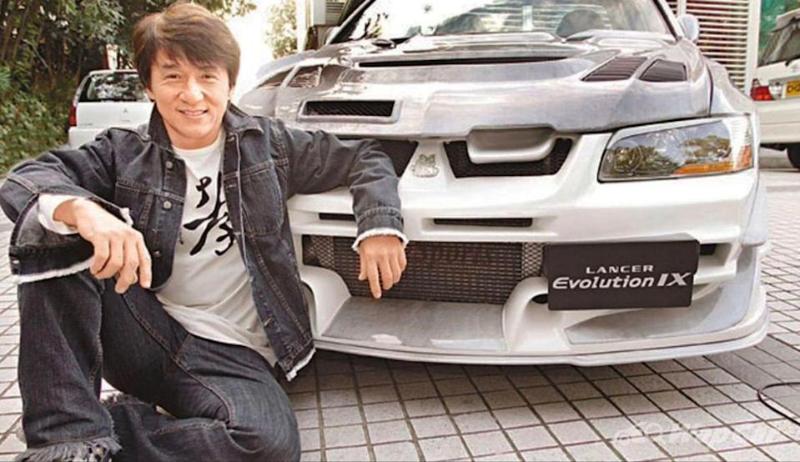 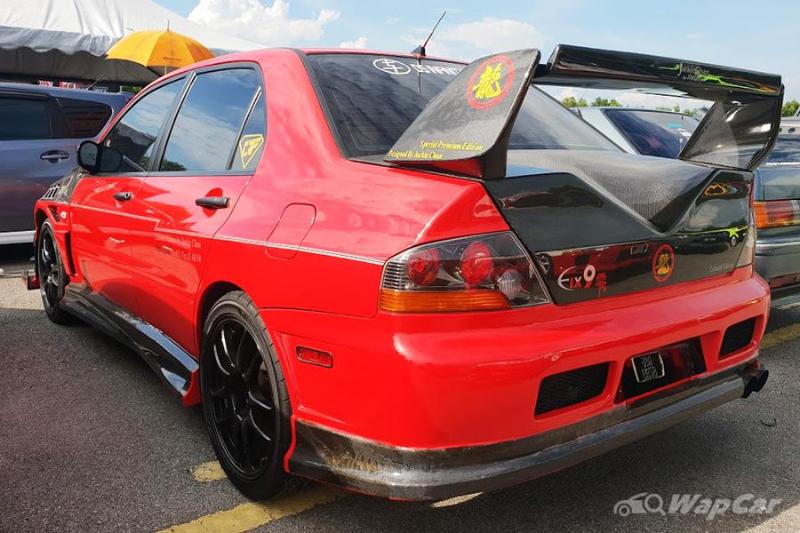 The Jackie-badged Evos each cost USD 77,0000 (~USD 107k or RM 449k today) which was simply a lot for a four-door sports car with some questionable visual aesthetics like a weird boot design that droops in the middle. However, for some fans of the action star who also enjoy things that move on four wheels, this might be an exclusive addition to their memorabilia collection.

As long and fruitful the partnership between Mitsubishi and Jackie was, there has been very little collaborations between the two as of late. Most of his current films felt a little stale as compared to his older ones and some of them no longer featured him driving a car with the Three Diamonds badge.