HomeNewsMalaysia was home to a few sports car brands in the 1990s, this is their rise and dramatic fall

Malaysia was home to a few sports car brands in the 1990s, this is their rise and dramatic fall 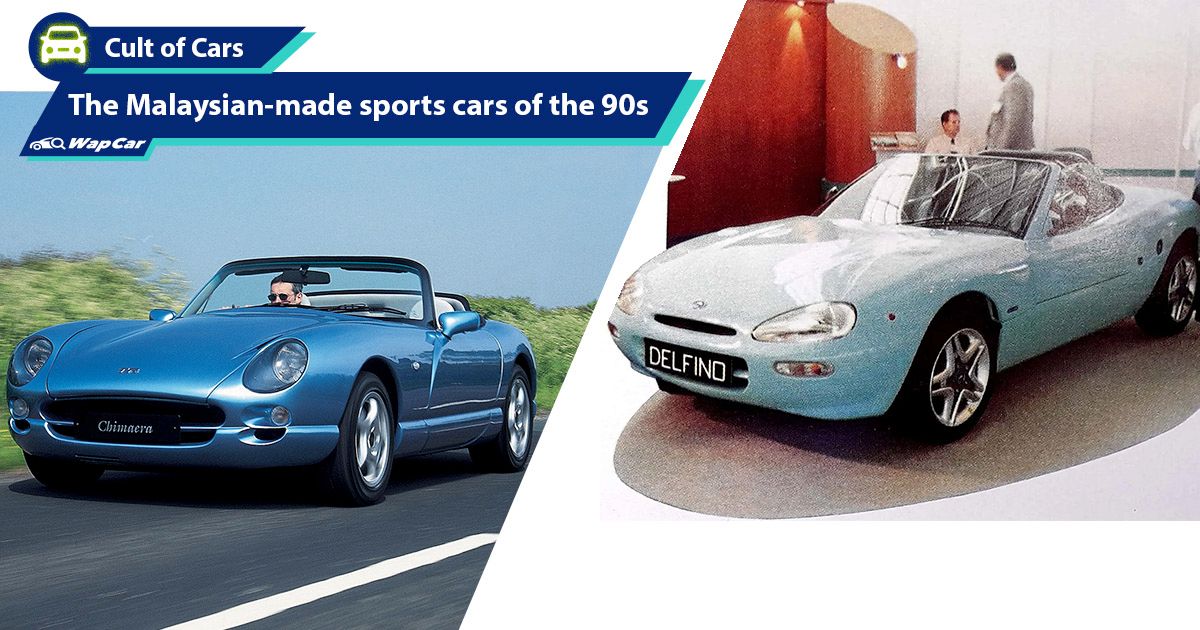 When the first Proton rolled off the assembly line in 1985, it not only showed the world that Malaysia can produce its own car brand, but it would also leapfrog the nation into an industrialised one too. In the ensuing decade, Malaysia would launch a second national car brand, a national bike, a national van, and a national truck.

What’s left then would be the first national sports car except the term ‘national’ here would become very loose and doesn’t really imply anything other than enforcing more patriotism in its people. 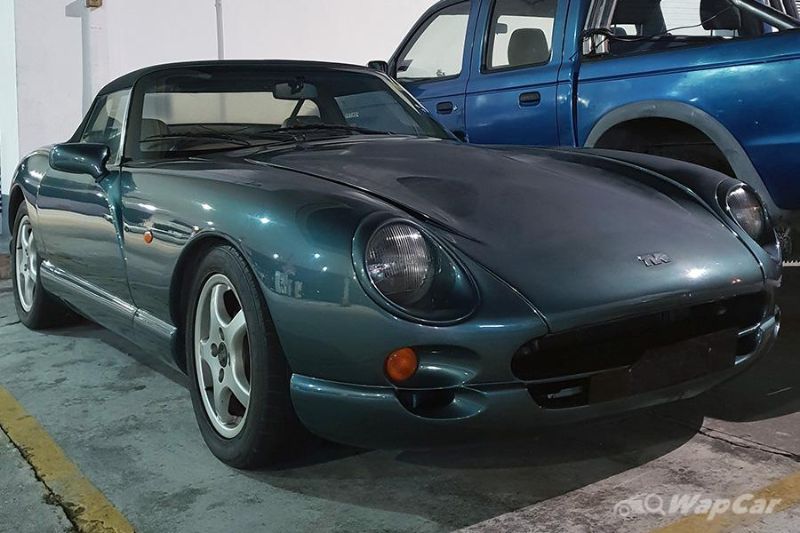 The mid-90s would be an eventful period for Malaysia as it’s during these few years the country saw a few “made-in-Malaysia” sports cars being envisioned but out of these brands you’re about to read in this article, only one would at least make it in the new millennium. 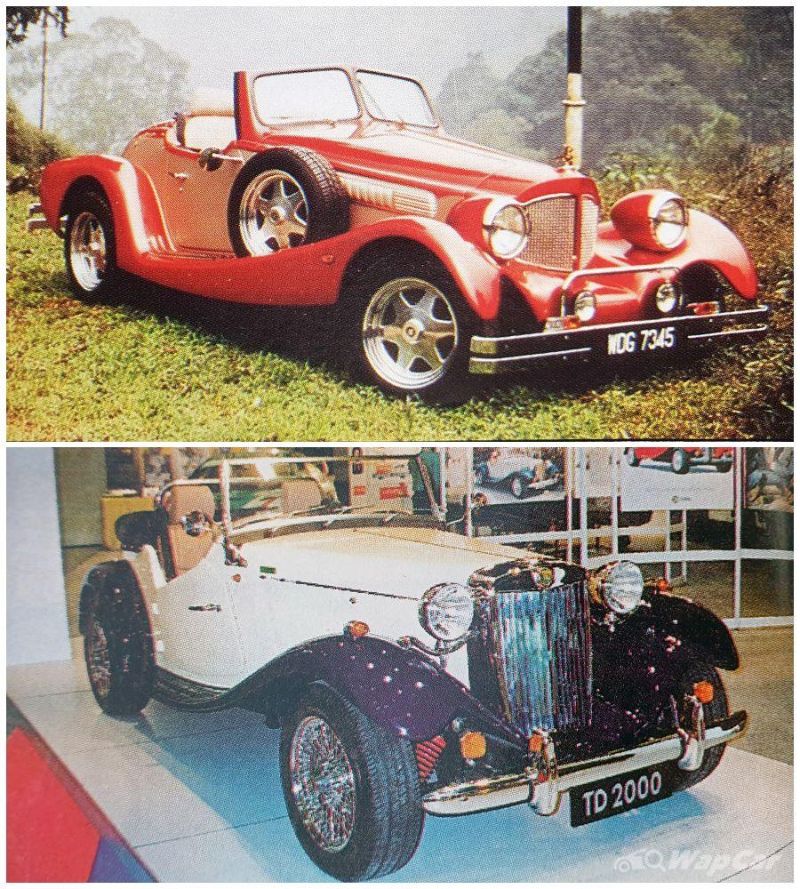 Perhaps you might have heard of Bufori and TD 2000, but besides these 2, there were at least 3 other brands that wanted to turn Malaysia into a sports car hub. We begin with the one that showed the most promise at being home-grown, Delfino.

Also read: Anyone remembers the TD 2000, the Malaysian-made retro car? 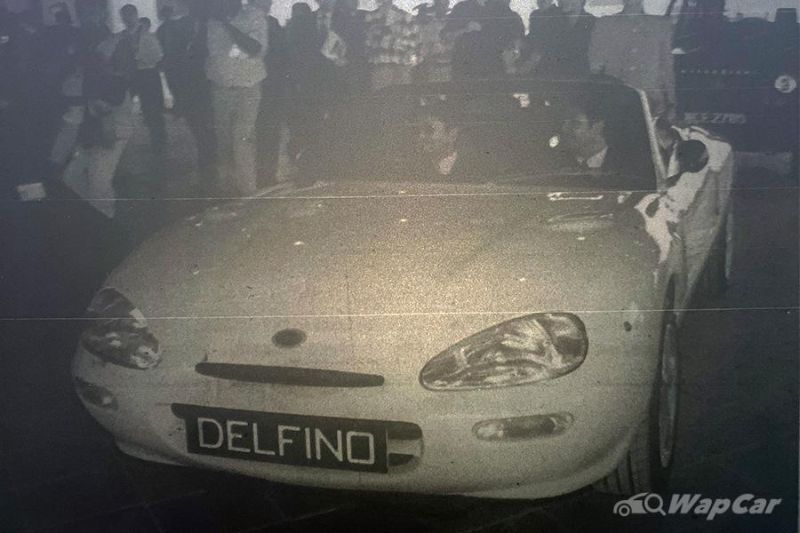 Delfino is Italian for dolphin and it’s also the name of the “first” Malaysian sports car. At the 1996 Langkawi International Motor Show (LIMOS), the turquoise, curvy roadster was being driven towards the entrance of the Mahsuri International Exhibition Centre. 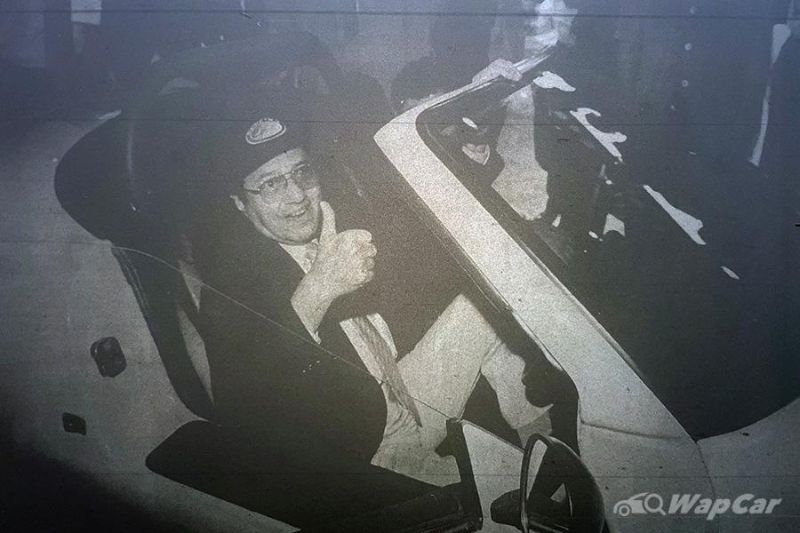 In the driver’s seat was the fourth Prime Minister of Malaysia, Tun Dr Mahathir Mohamad and next to him was the man behind the sports car he was driving, Arjunaidy M.N. Ariffin. The 37-year-old father of 4 was the managing director of both Arni Malaysia Sdn Bhd as well as Minari Engineering Limited and all eyes were on his creation.

The sports car touted itself as Malaysian-designed and the company behind it was helmed by a Malaysian but it was a sort of United Nations effort underneath it all. Minari Engineering was based in the UK and the Delfino was already sold in Britain as the Minari Roadsport as a kit sports car. 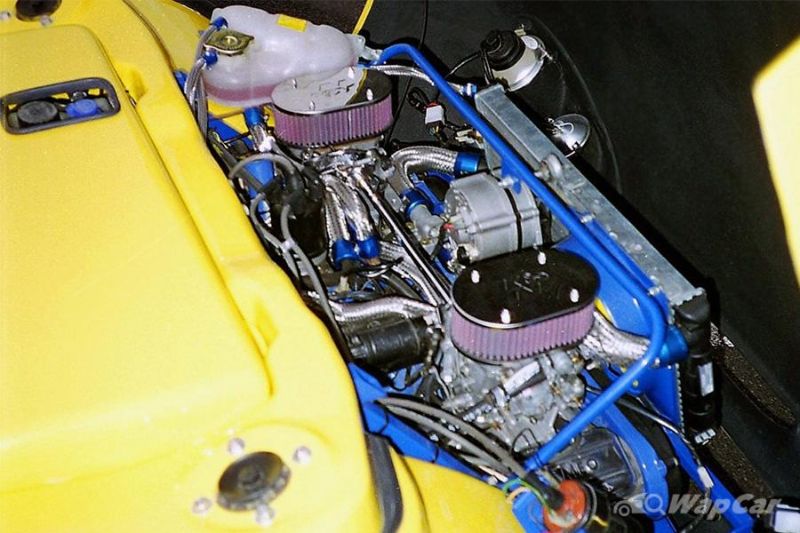 Hence, it used a lot of borrowed components including headlights from a Mazda MX-3 (or a John Deere tractor), a windscreen from a Citroen AX, as well as the chassis, suspension, and engine from an Alfa Romeo 33. That engine was a 1.7-litre boxer engine (132 PS/148 Nm) paired with a 5-speed manual gearbox that drove the front wheels.

Though the Alfa connection might imply the Italian name, its founder said in an interview with Asian Auto magazine that he chose Delfino because he wanted a more internationally accepted name that implies intelligence. Add on the IQ 140 model name and you can sense the intelligence in the room.

Delfino displayed two units of its Malaysian sports car at the glittering halls in Langkawi. Estimated to cost around RM 120,000 (~RM 214,000 in 2022), the sports car attracted a lot of attention from prospective buyers with 65 orders being placed. It was the second highest bookings made at LIMOS ’96 after Naza Group’s 85 orders. 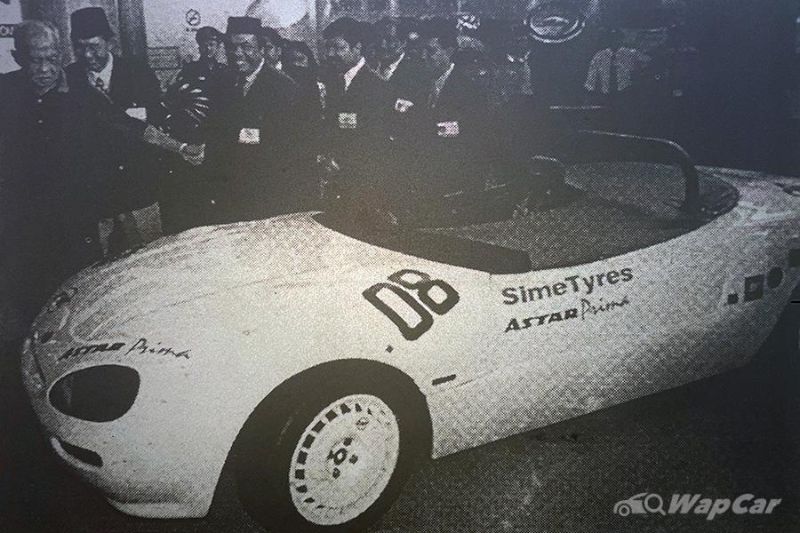 Arni Sdn Bhd had ambitious plans including opening a plant to make the Delfino sports car in Port Klang in 1997 and aimed to sell around 200 units a year. Despite all the publicity and attention, LIMOS ’96 would be the company’s only positive limelight. 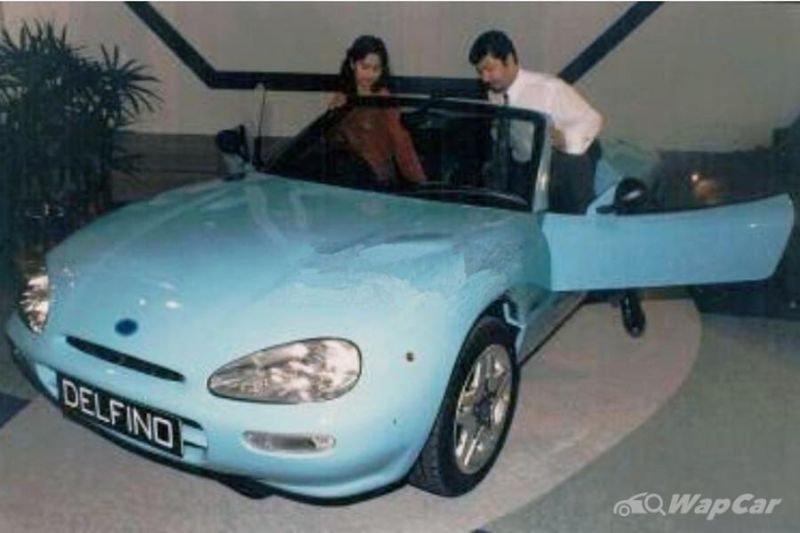 Plans to enter the United States market were scuppered after it was rejected by the organisers of the Detroit Motor Show to participate in 1997. Meanwhile, their plans for setting up a local manufacturing plant in Malaysia were also in limbo after being rejected by the Ministry of Trade and Industry (MITI) and the Malaysian Industrial Development Authority (MIDA). 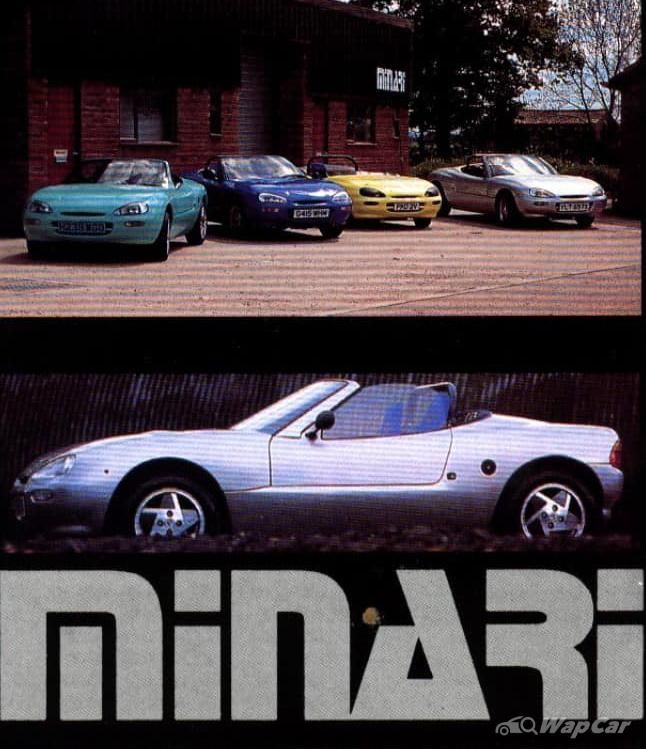 Delfino’s plans to become the first Malaysian sports car company ended badly and things were looking as bleak for Minari Engineering in the UK as well. The company which was founded in 1990 would stop producing the Roadsport in 2000 and the tooling, production rights, and moulds were sold to another small British manufacturer, Peninsula Sports Cars in 2011. Wonder what happened to those 65 potential buyers?

1996 would turn out to be a significantly crucial year to be a sports car fan in Malaysia. Proton had just bought Lotus from the Artioli family and there were plans to assemble the then newly launched Lotus Elise in Malaysia. 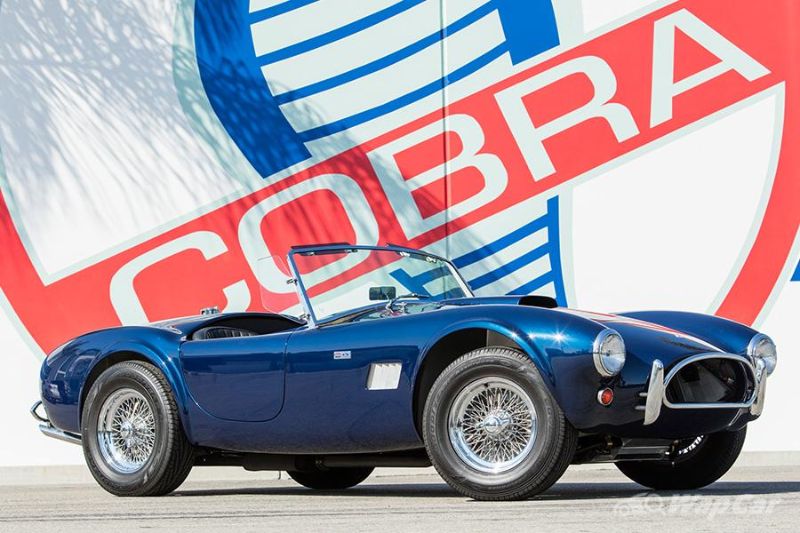 Besides Delfino showing up at LIMOS at the end of the year, another announcement was made concerning another legendary name in motorsports that wanted to seek Malaysia as its new home. 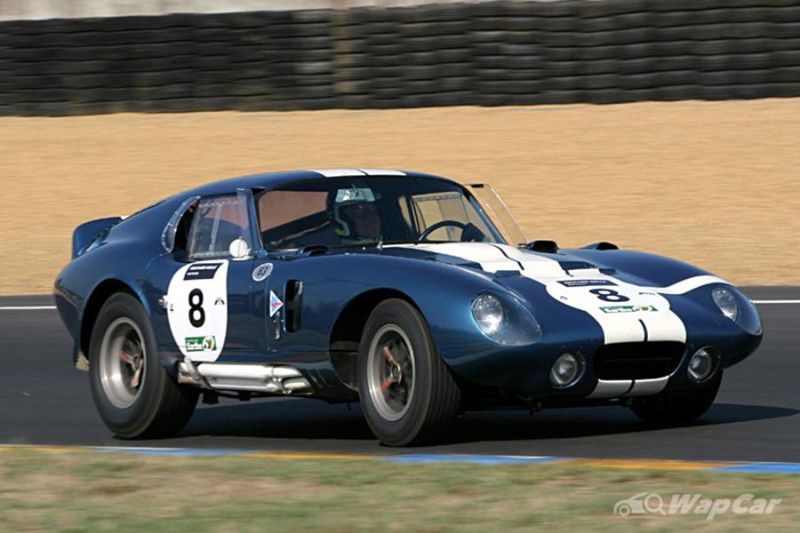 A joint venture called United Shelby Sdn Bhd which saw 51% Malaysian equity and the remaining 49% shared between American and Japanese interests, made headlines in local business publications in late 1996. The company was looking towards assembling Shelby sports cars like the Cobra, Daytona, GT40, and GTS at a plant in the Klang Valley. 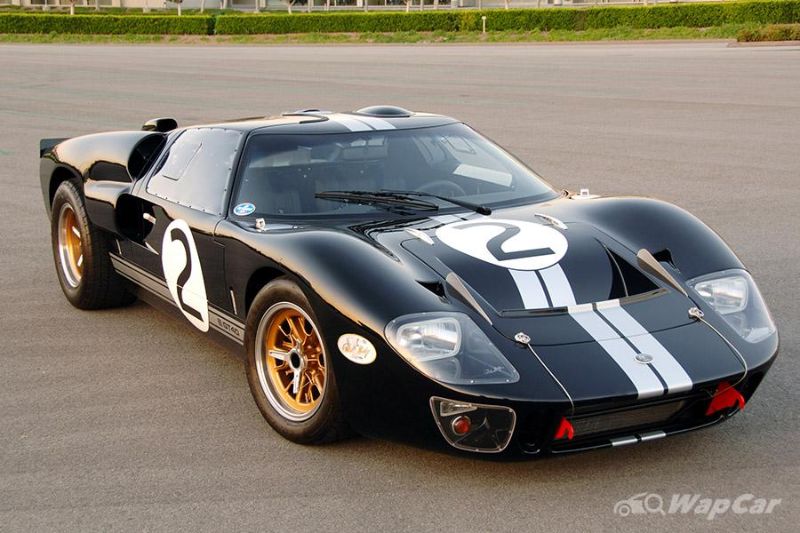 Though it shared the same name as the man who famously challenged Ferrari at Le Mans and won, the Shelby cars to be produced in Malaysia were, just like Delfino, kit cars. Despite being assembled by Malaysians, the models produced would only be in left-hand drive and United Shelby had no plans to produce right-hand drive models for both local and RHD markets. 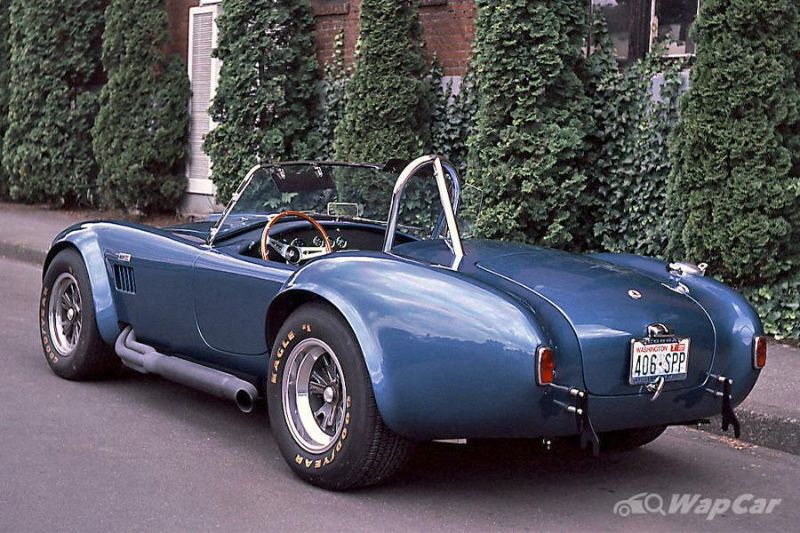 While there was some excitement over the prospect of a Malaysian-American sports car collaboration, things never materialised beyond the announcement and United Shelby would be dissolved entirely. That meant the title for Malaysia’s first sports car brand remained void again.

From Blackpool to Port Klang 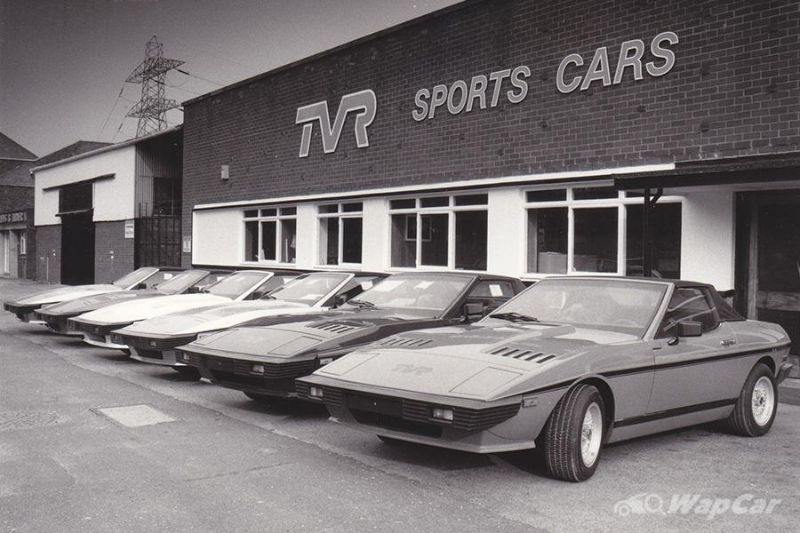 TVR wasn’t as huge as other British sports car makers like Jaguar or even Lotus but it has a storied and fascinating history. It was founded by Trevor Wilkinson in Blackpool, a town more famous for its seaside than its sports cars. It’s like having a car company based in Port Dickson.

The UK has many small, independent sports car manufacturers which were sometimes unfairly mocked for literally having a shed as a factory. TVR would eventually grow out of its shed into a proper plant in the decades that followed but the humble upbringing continued into the 1990s. 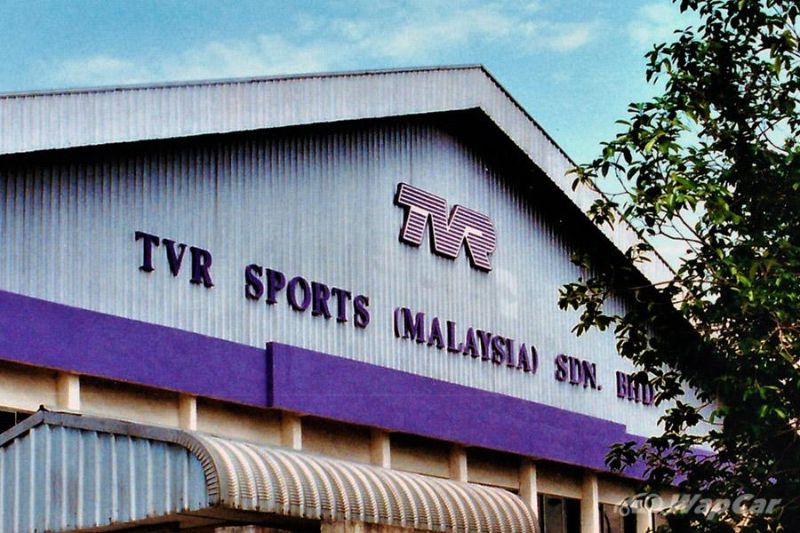 Under the ownership of Peter Wheeler, TVR would enter a period that saw some of the most exciting British sports cars outside of the established brands and it was looking to expand into new markets. In 1995, TVR Sports (Malaysia) Sdn Bhd (TVRM) would be founded and plans to build the Chimaera at a 2-acre RM 20 million plant in Port Klang were underway. 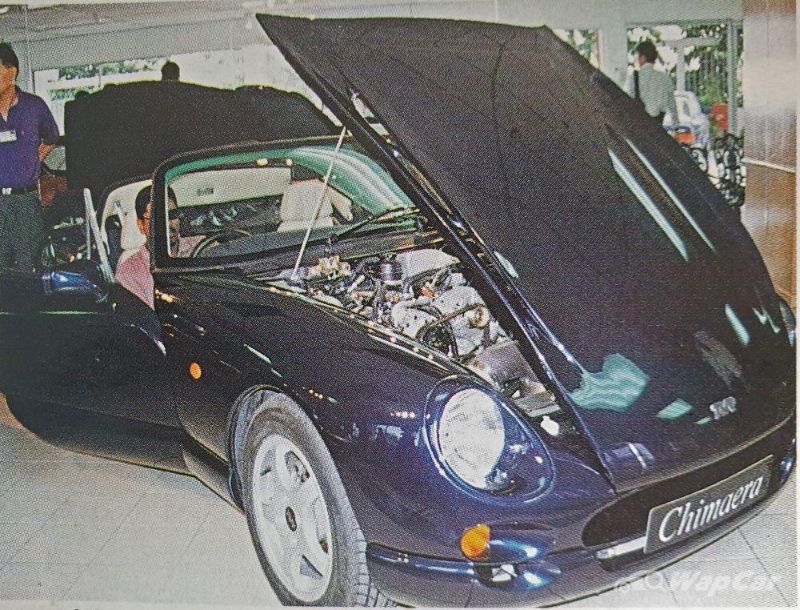 This would be TVR’s only plant outside of the UK and though it would be handbuilt in Malaysia, the heart of the Chimaera which was either the 4.0-litre (275 PS/427 Nm) or 5.0-litre (340 PS/490 Nm) naturally-aspirated V8 engines, as well as the 5-speed manual transmission, would be shipped over from the UK. 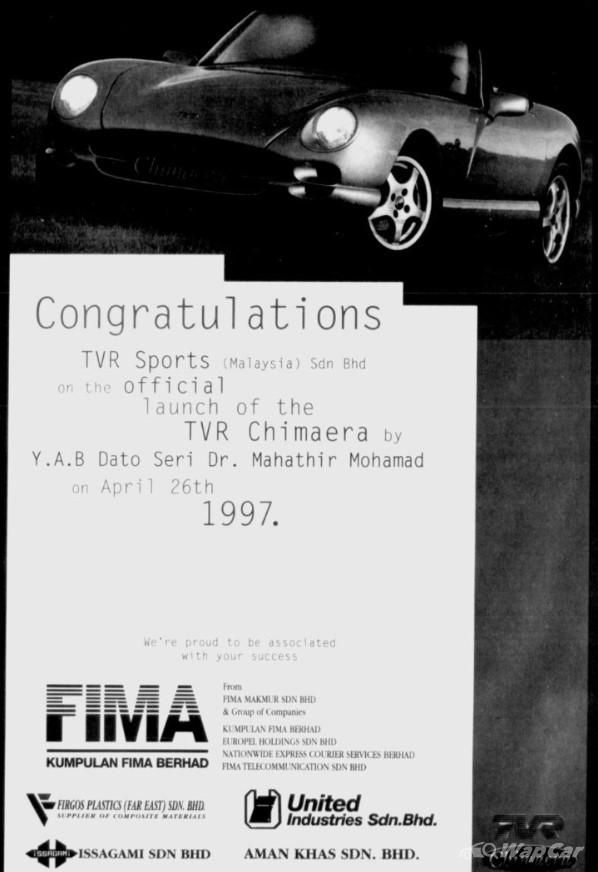 Nevertheless, the TVR Chimaera was deemed Malaysia’s first sports car when it was launched in April 1997, just in time for Malaysia's 40th Merdeka year. Still, it was an exclusive car with each Chimaera taking about 3 months to complete. 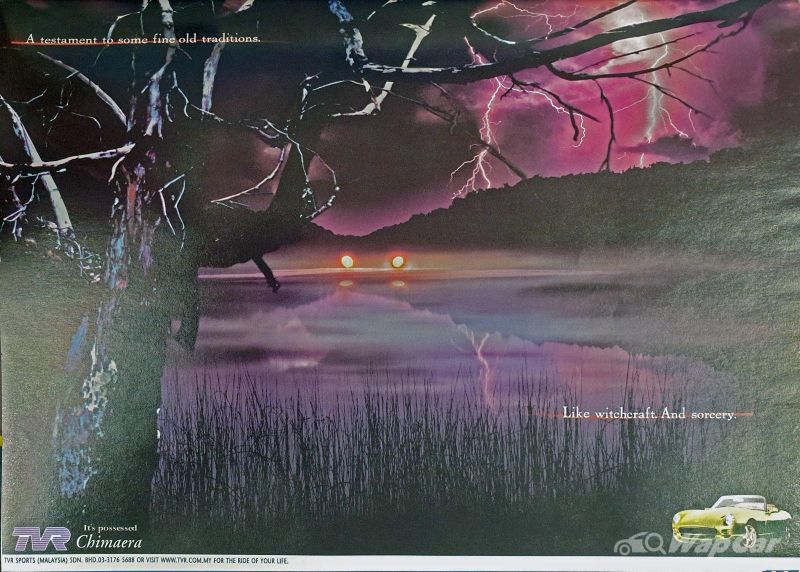 At launch, the fibreglass-bodied convertible was priced from RM 238,000 (~RM 420,000 in 2022), making it both the most powerful and most expensive Malaysian-made car. It was enough to be listed on the Malaysian Book of Records and TVRM even competed in multiple races in Malaysia and around the region. 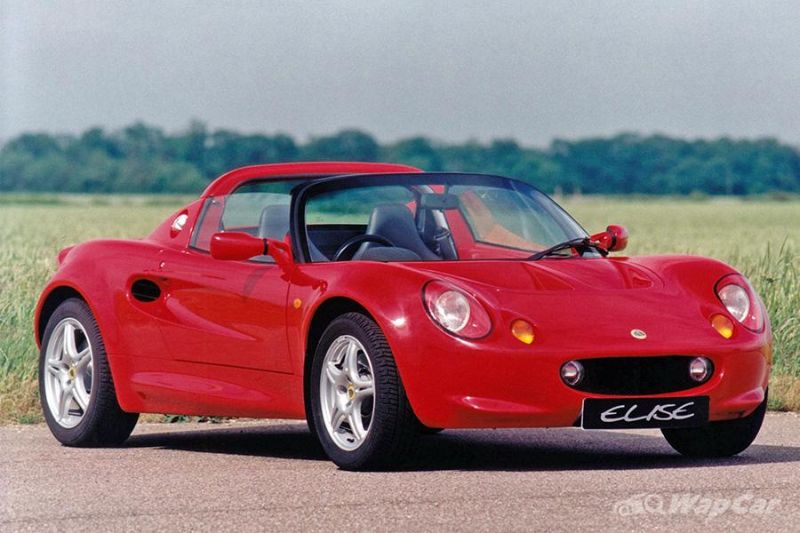 Speaking of sports cars, the Lotus Elise would also start local assembly at Proton’s Shah Alam plant in 1997 as well. These Malaysian-made Elises were meant to be sold in regional markets like Australia, New Zealand, and Hong Kong. At RM 195,000 (~RM 343,000 in 2022), it was “cheaper” than the Chimaera but also as limited in quantity. 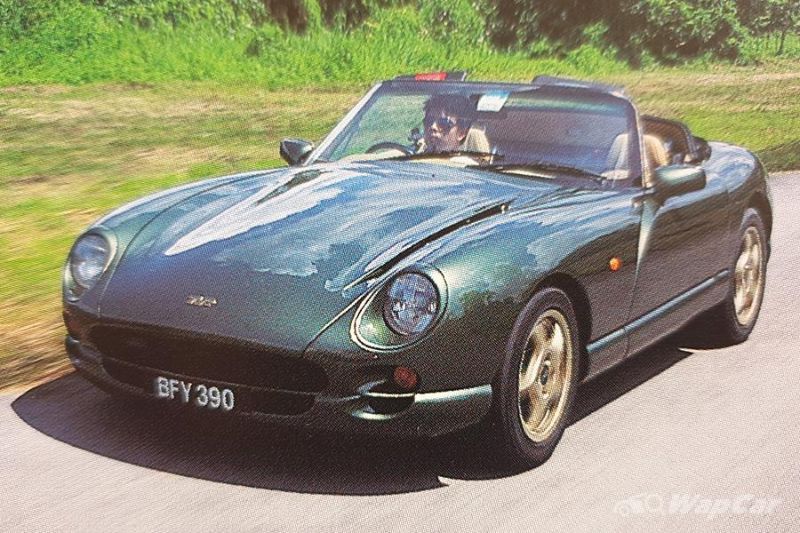 The locally-assembled (CKD) Lotus Elise would be discontinued in 2002 and the subsequent generations would all be imported from Hethel, the UK. Meanwhile, the Chimaera would soldier on almost unchanged until 2000 when an update was introduced. 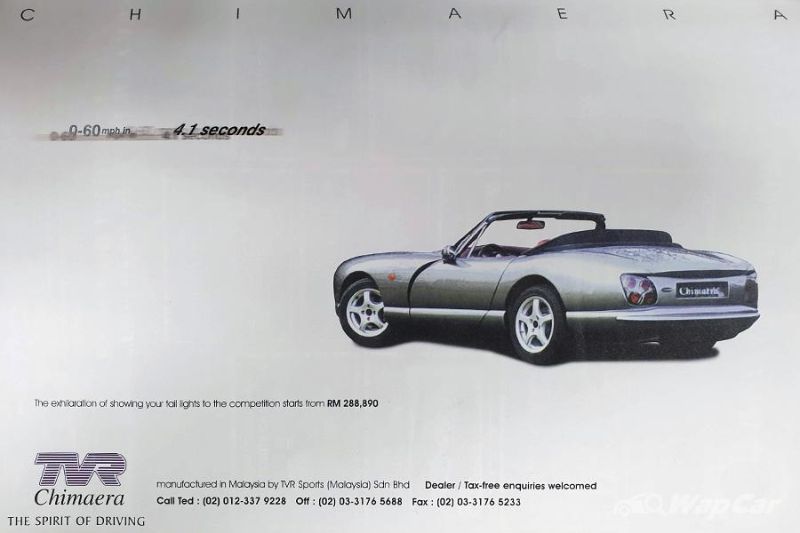 The update, dubbed Chimaera 2001 would see further improvements on the V8 engines as well as redesigned taillights, boot, instrument cluster, and aluminium switches.

Things would not look rosy for TVR though as financial issues and a change in ownership see the company falter. By 2004, TVR was seeing red in its financial statements and the Malaysian division was even slapped with a letter by authorities for not paying its staff salaries of almost RM 100,000.

TVRM would eventually close its doors in 2006 and the Port Klang factory which used to be the pride of Malaysia 25 years ago was subsequently demolished. TVR would undergo a revival but don’t expect it to return to Malaysia.

The end of Malaysian-made sports cars? 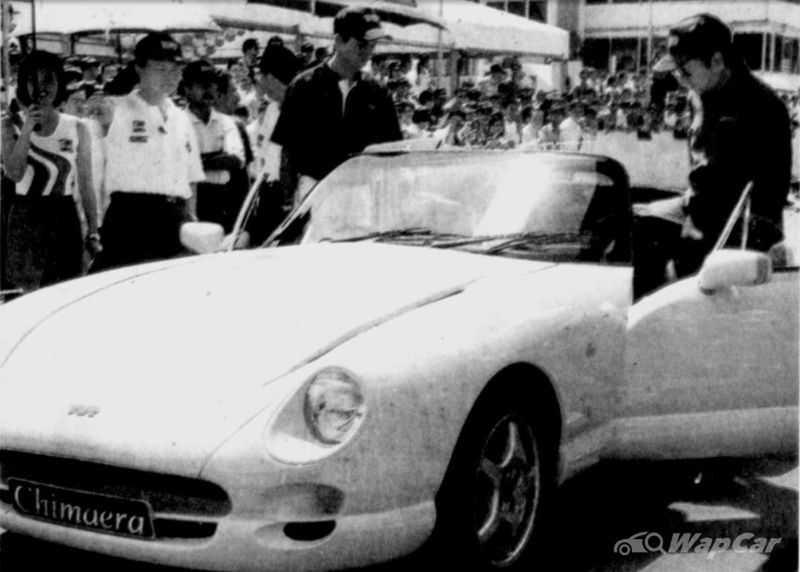 The dizzying highs of the 1990s that saw numerous national projects come to life in Malaysia crumbled following the financial crisis of 1997. It was one of the reasons sports car manufacturing in the country wasn’t abuzz from this period onwards. 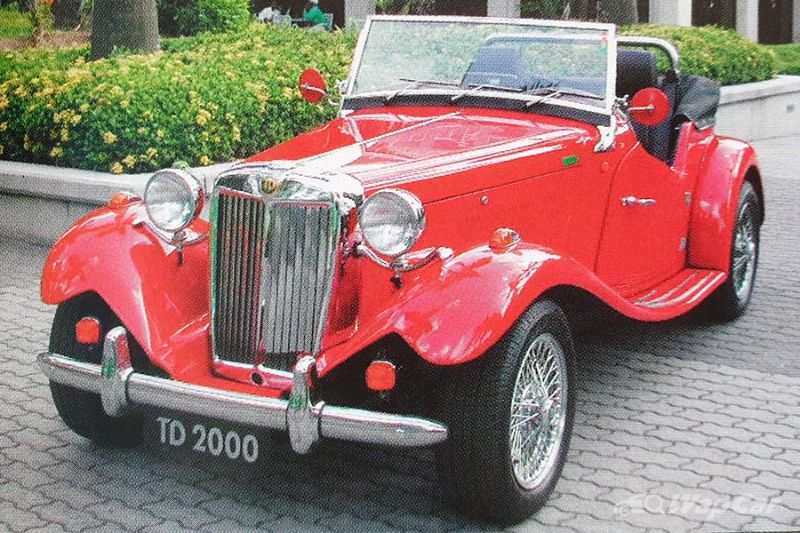 TD Cars would set up in 1998 as a subsidiary of EON which also handled its distribution in the next decade. Unfortunately, things have powered down for the modern iteration of the post-war British classic.

Also read: EON and USPD - When Proton had separate dealer networks like Toyota in the 1990s

Only Bufori is still making high-end performance cars in Malaysia today though the Bufori CS has yet to enter production and it has been 3 years (and counting) since the prototype was unveiled. Then again, the Kepong-based carmaker sees itself more as an Australian business with a Malaysian headquarters. 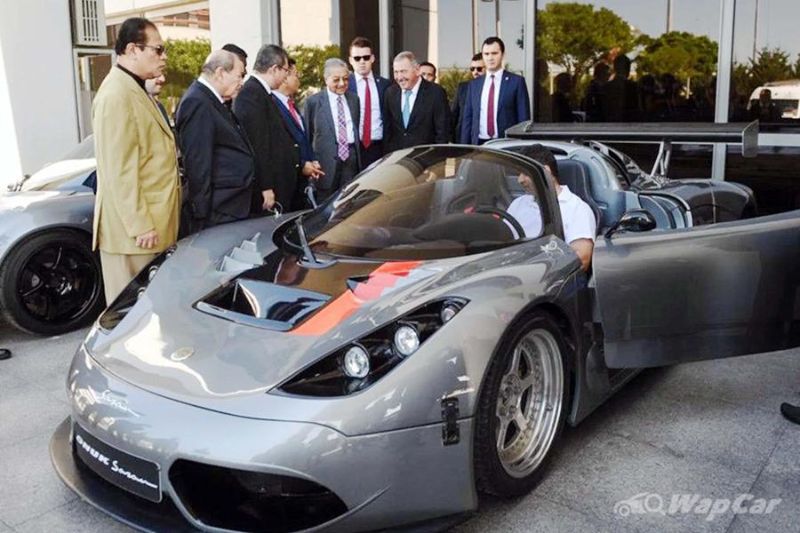 The man behind the country’s numerous national projects did not quite give up on the dream of a Malaysian sports car or supercar manufacturer. Following the announcement of a third national car project in 2019, Tun M envisioned a new local sports car company with foreign partnerships after he was inspired by Turkey’s own supercar maker, Onuk.

The Turkish company has since left supercars and solely focuses on building patrol boats for defence and law enforcement missions – an industry it was originally established for.

With the third national car project essentially buried and both Proton and Perodua solely focusing on cars that people would want to buy, it won’t be likely that we would see a sports car being produced in Malaysia soon. Unless you want to consider the vapourware that allows you to “drive to earn”.