HomeNewsOld vs New: 2022 Perodua Myvi facelift, is the updated King still deserving of its title?

Old vs New: 2022 Perodua Myvi facelift, is the updated King still deserving of its title? 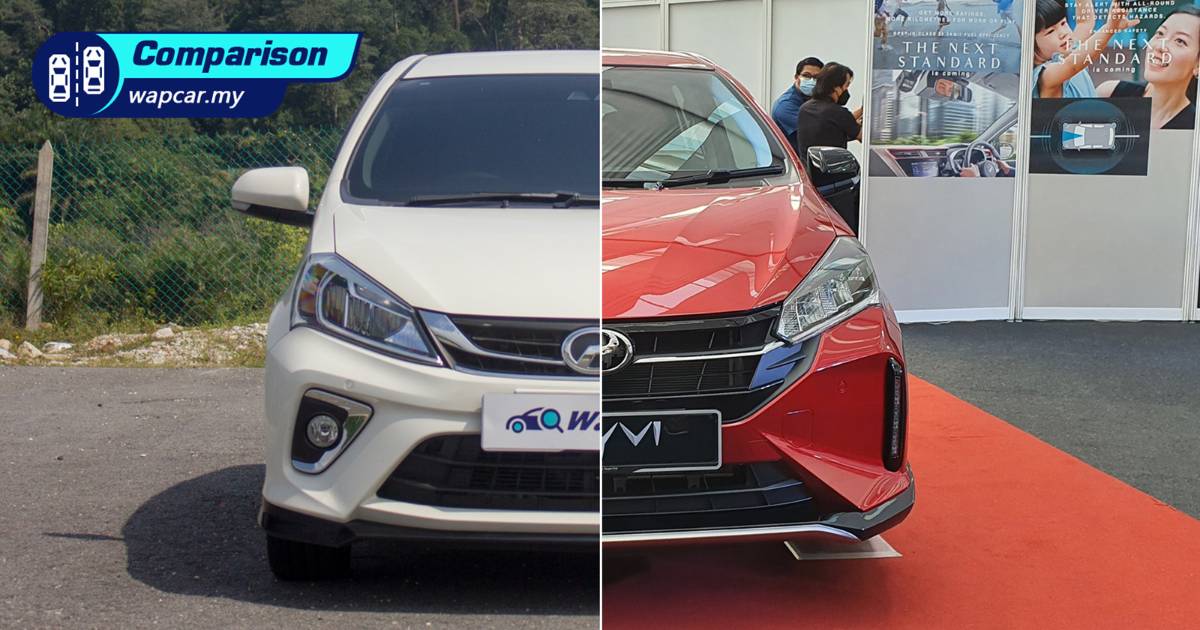 Last year, Perodua gave its (and Malaysia’s) best-selling model a slight update that saw a new paintjob and an updated A.S.A. 2.0. This year though, Malaysia’s most popular carmaker launched the new 2022 Perodua Myvi facelift that features more than just a new splash of paint. 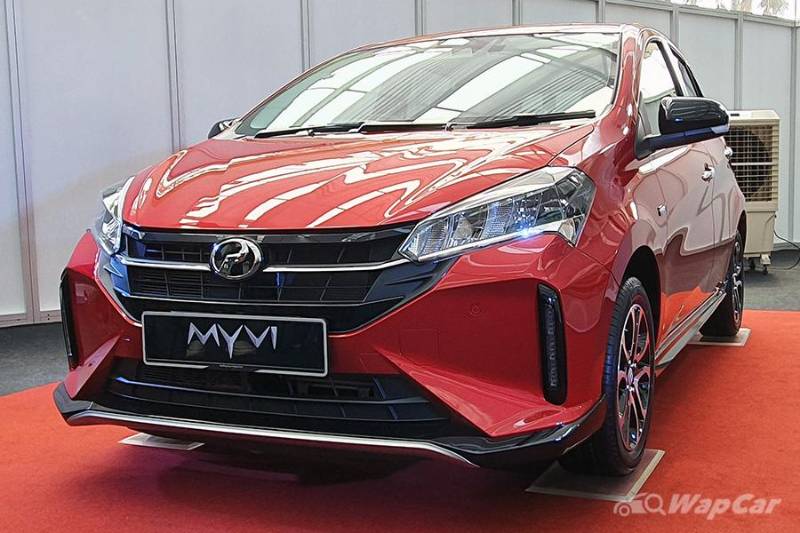 Perodua knows Malaysians get easily excited for anything that involves the King so in the lead-up to its launch, it posted numerous teasers. In fact, about a week before the teasers show up, Malaysians already have a glimpse of what the Myvi facelift would eventually look like.

Aside from the drastic change up front, what else is different on the updated King?

Price and variants – Price increase and no more manual 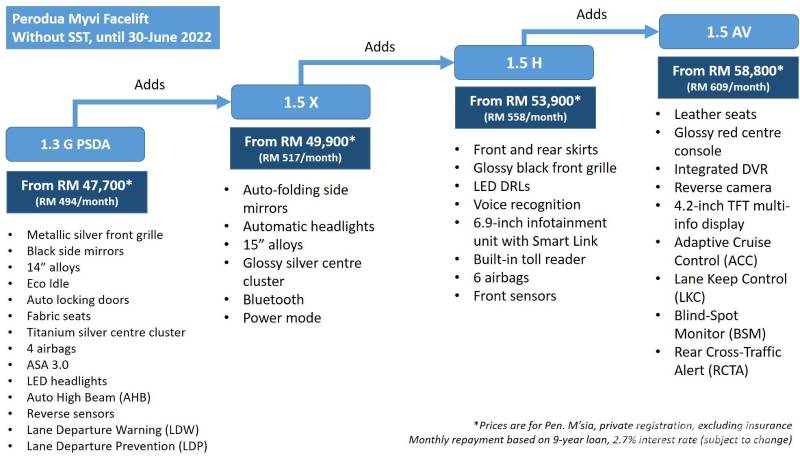 Perodua maintains the number of variants of the updated Myvi to five but drops the lone manual transmission that was offered in the 1.3 G variant. In fact, G is the only variant that comes with the 1.3-litre 1NR-VE engine (95 PS/121 Nm).

We did mention that prices of the Myvi facelift are bumped up compared to the pre-facelift with some variants costing around RM 6,000 more. Granted, the new Myvi is a whole lot more advanced than the pre-facelift as we shall explain further. 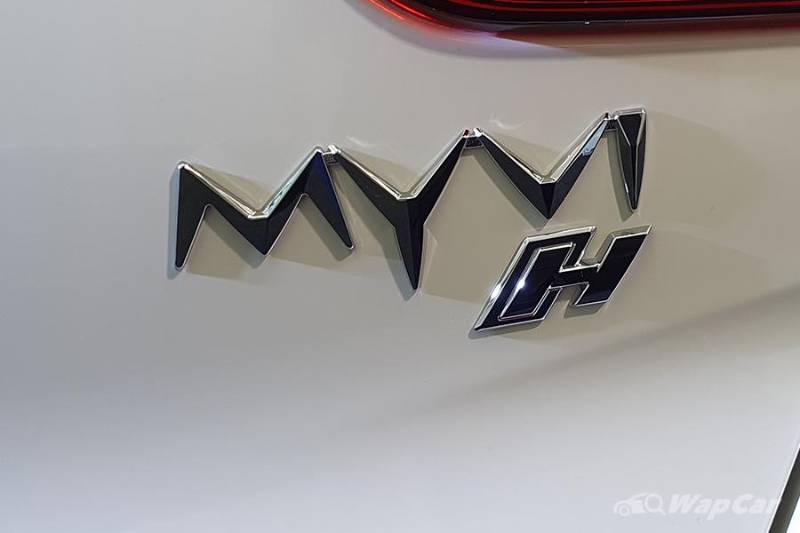 The Myvi has always been dubbed as the King of Malaysian roads and its numerous antics have become a local meme. But if there’s one thing that most Myvi owners love to do with their almighty King, is to spruce it up. 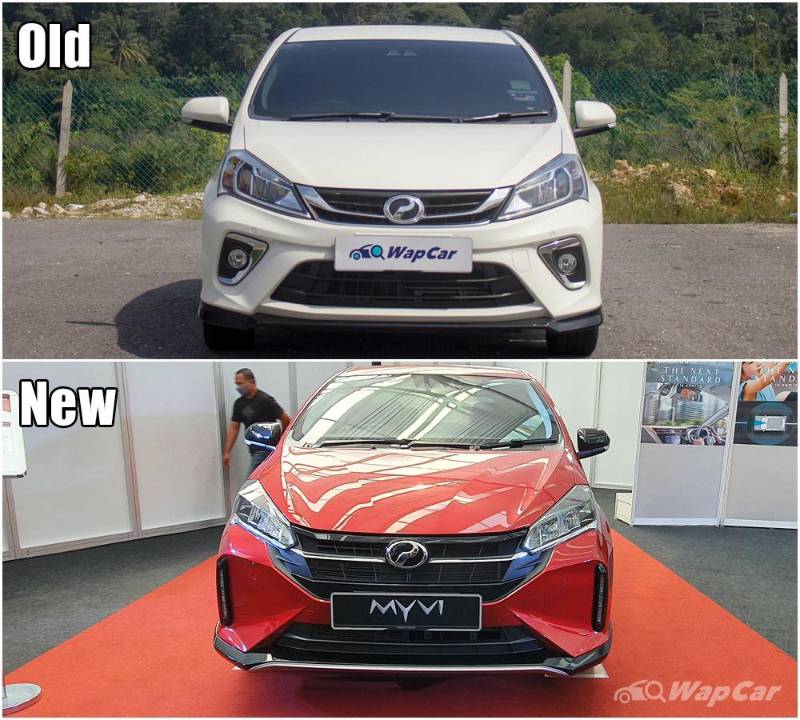 The new Myvi facelift gets a sportier look on the outside with redesigned headlamps and a larger front grille. The LED headlamps are standard across all variants but the front grille differs depending on the variant. 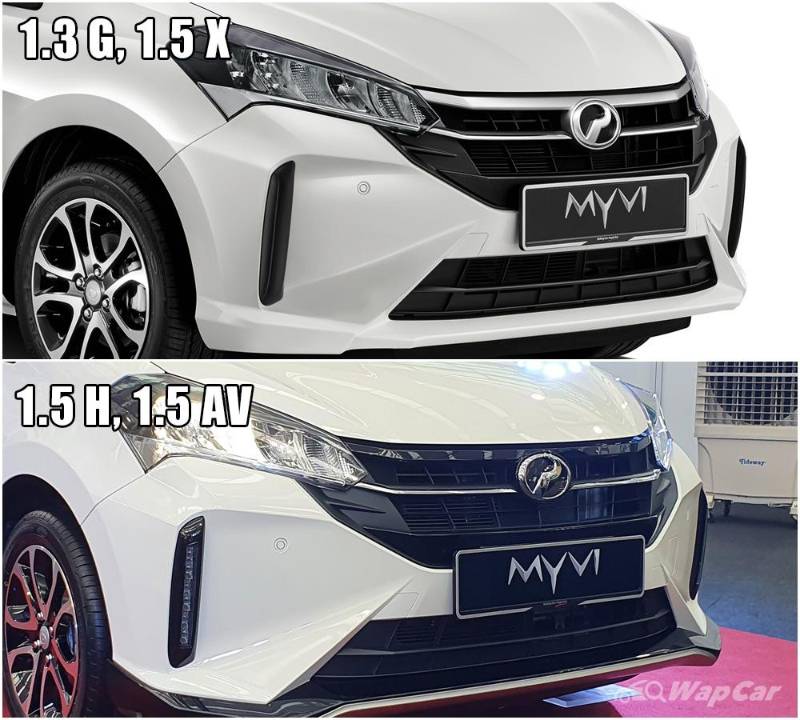 Also featured on the two highest specs of the Myvi are vertically-placed LED DRLs and front skirting with a silver accent. Combined with the massive Perodua corporate grille, the refreshed King looks a little bit like its bigger brother, the Perodua Aruz. 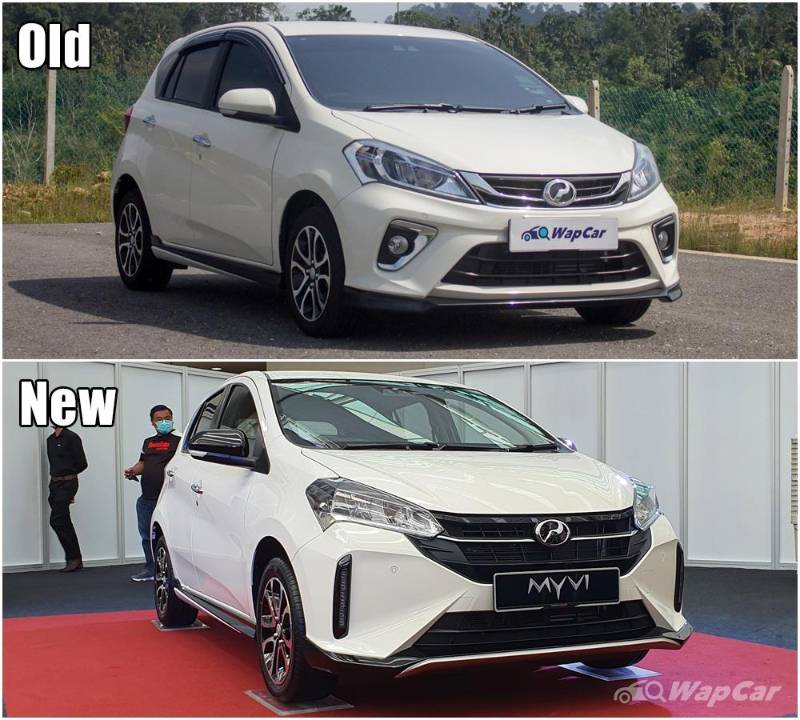 Overall, the looks are a bit polarizing, to say the least. Some of us at the office think it enhances the King’s appearance while others think the updated Myvi looks like the Japanese “Impossibru” meme. 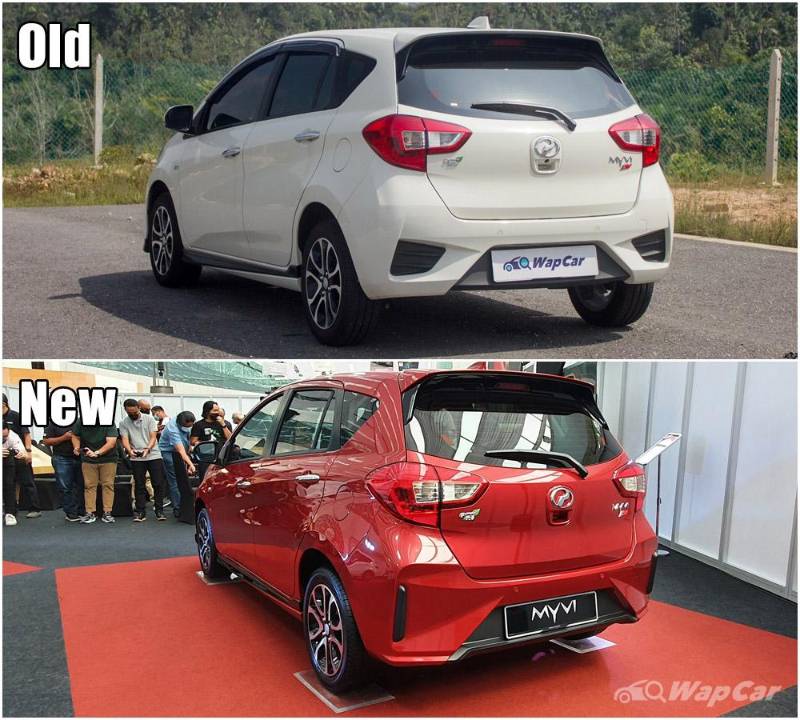 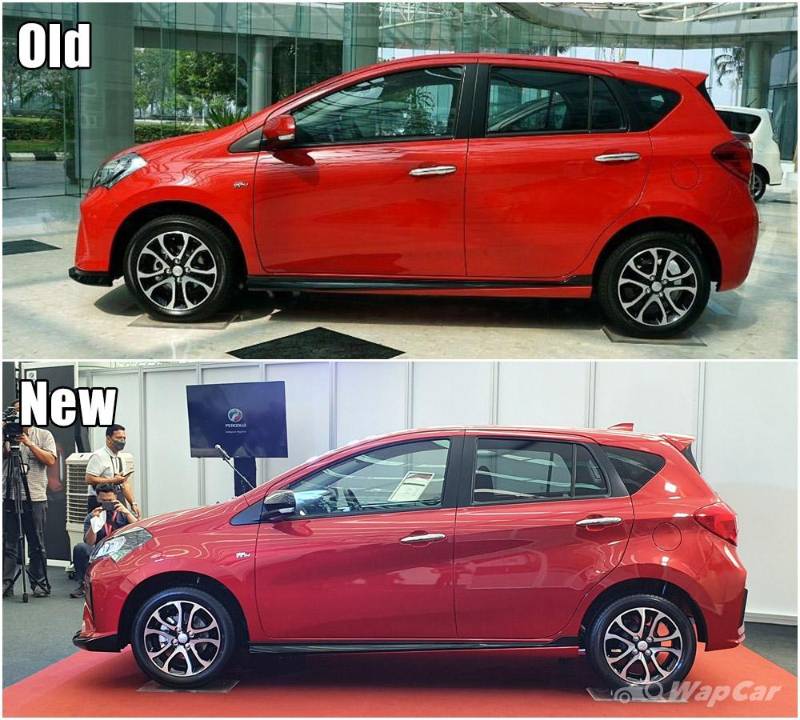 Ditto the side profile. Apart from the black side mirrors which fold automatically, the Myvi facelift looks just like its predecessor from the side, down to the wheel design. 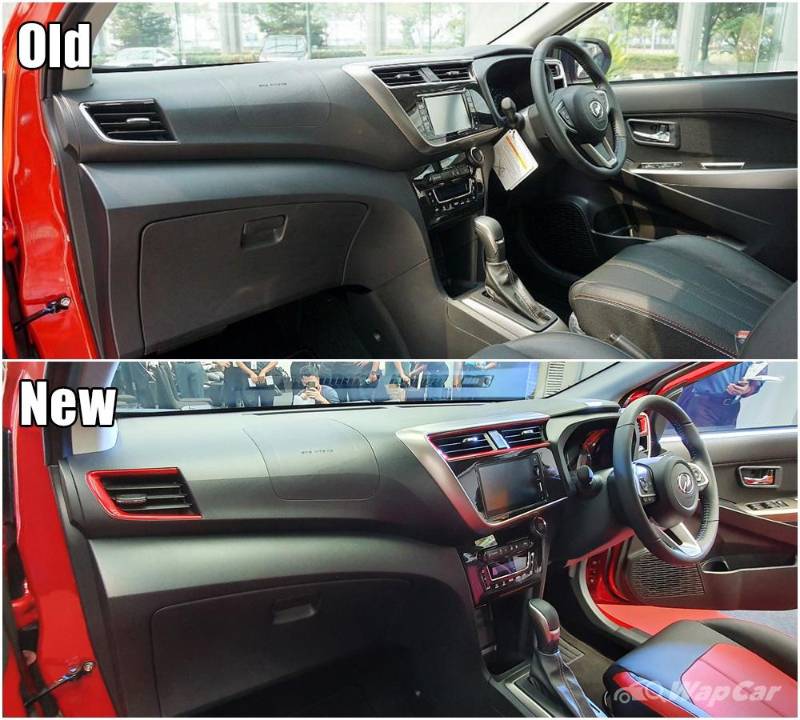 Step inside the Myvi and you’ll be greeted with lots of red accents but that really applies if the variant you’re getting in is the 1.5 AV. The highest trim comes with red accents around the air vents and leather seats. 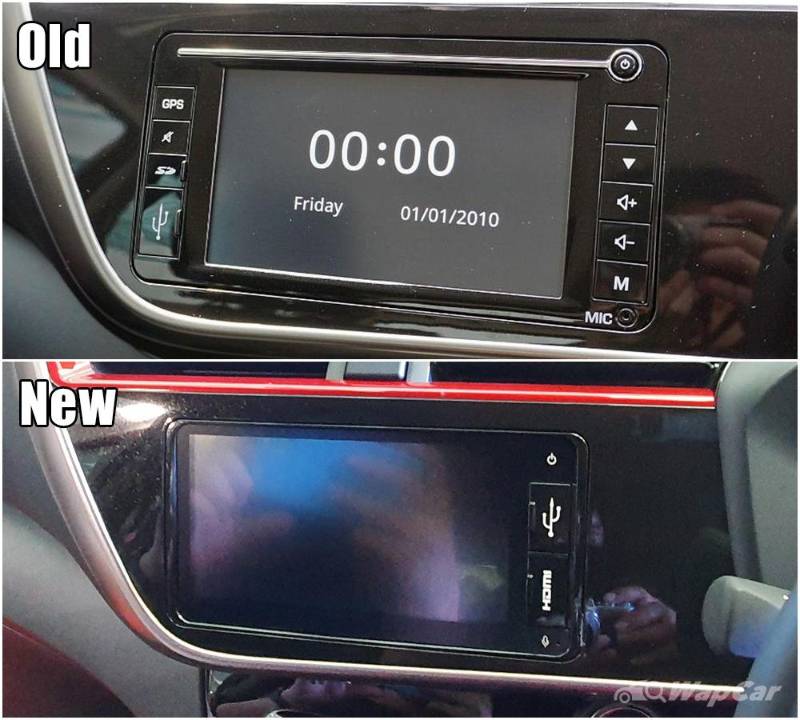 But it’s not all gloomy inside and besides, conventional trumps sporty especially for an all-rounder like the Myvi. There are some changes that are quite welcoming like the slightly larger infotainment screen – up from 6.2 inches to 6.9 inches – and the digital air-con controller which comes with a dedicated off button. Joy of joys.

Another change is the space that was once left blank above the digital AC controller in the pre-facelift. In the update, that space is occupied by the rear seatbelt reminder, perhaps emphasizing Perodua's role in bringing safety features to the masses. 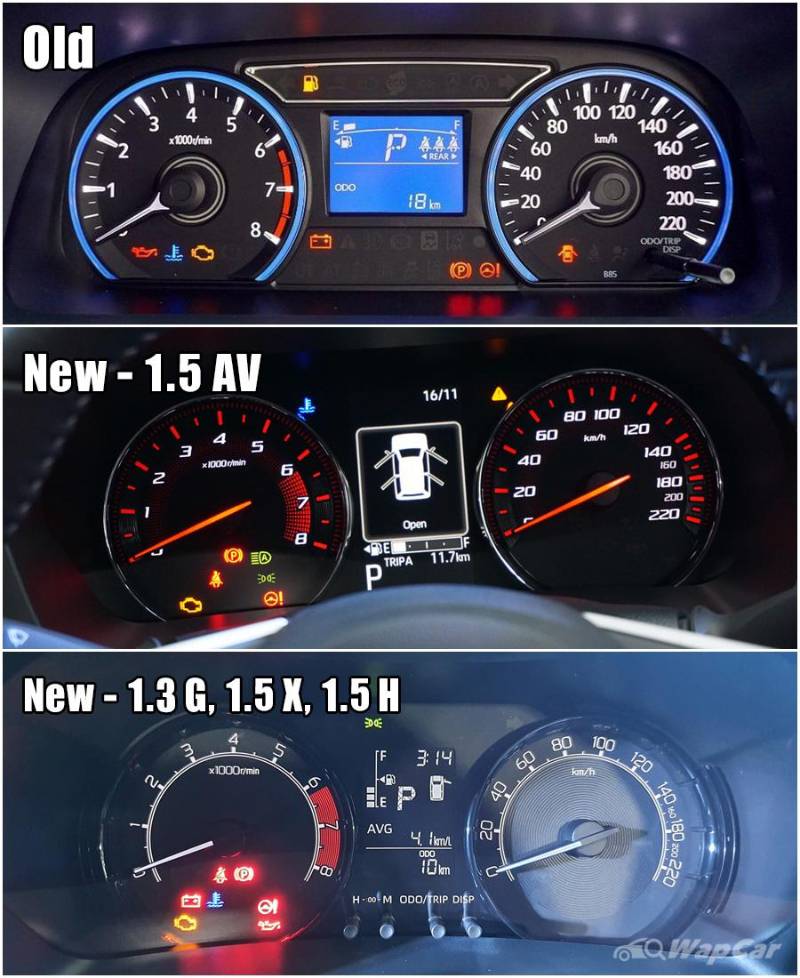 There is also a multi-coloured 4.2-inch TFT display in the instrument cluster for the AV variant. Other variants come with a basic black and white LCD display. Still, the redesigned instrument cluster breathes a bit of modernity to the Myvi. 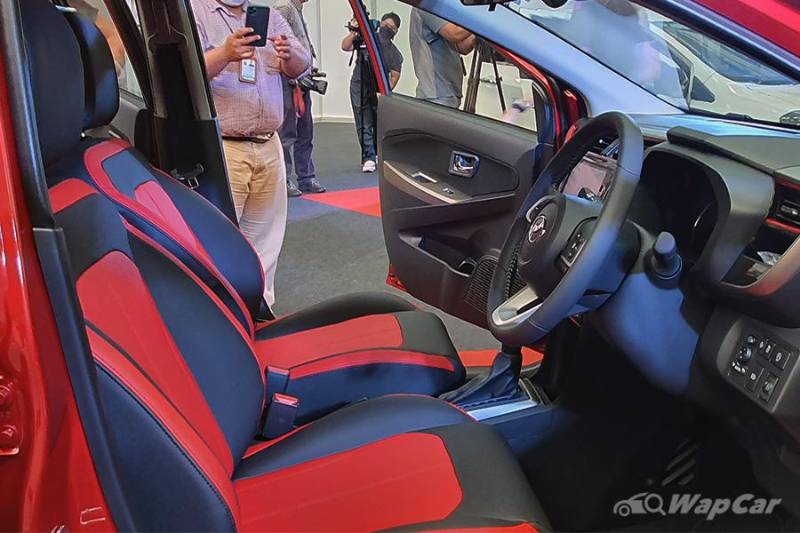 A feature that is now standard across the Myvi’s range is an auto door lock which is engaged either by the brakes or when the car exceeds 20 km/h. 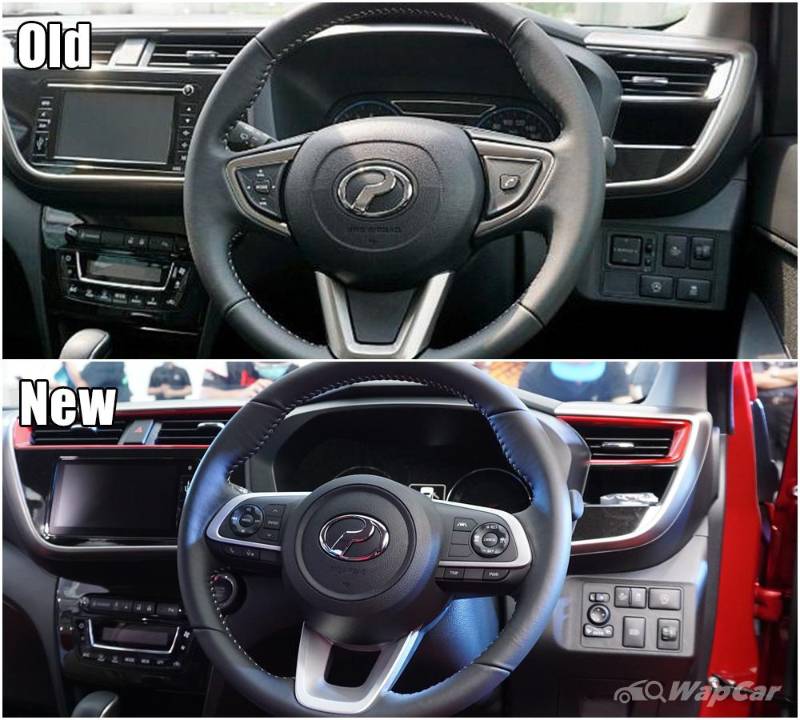 Besides the enhanced conveniences, the Myvi facelift also gets a new steering wheel that appears to be lifted off the Ativa. On all 1.5-litre variants, the steering wheel comes with a dedicated ‘Power’ button that Perodua claims to sharpen up the powertrain. Speaking of which…

The engines that propel the King forward remain the same as the pre-facelift, which are the aforementioned 1.3-litre 1NR-VE and the 1.5-litre 2NR-VE (103 PS/137 Nm). What has changed is the transmission as the Myvi goes for a more modern gearbox to keep up with rivals, not that it needs to keep up anyway.

Also read: Almost all B-segment hatchbacks have adopted CVT, what about the Perodua Myvi?

For three generations, the Myvi has been synonymous with the tried-and-tested 4-speed automatic. Though it has been a truly reliable transmission, like all good things, it must come to an end.

That said, the D-CVT (Dual-mode CVT) automatic could be embraced by Malaysians who want to seek better fuel economy and power delivery. We have explained in detail how the D-CVT works and it is currently available on the Ativa. 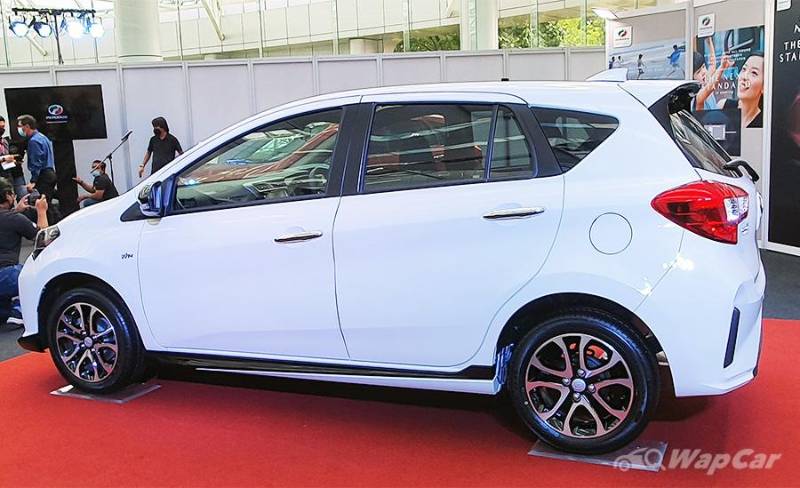 These figures are manufacturer claims so if you’re looking forward to seeing how close we can match those numbers, stay tuned for our full review. 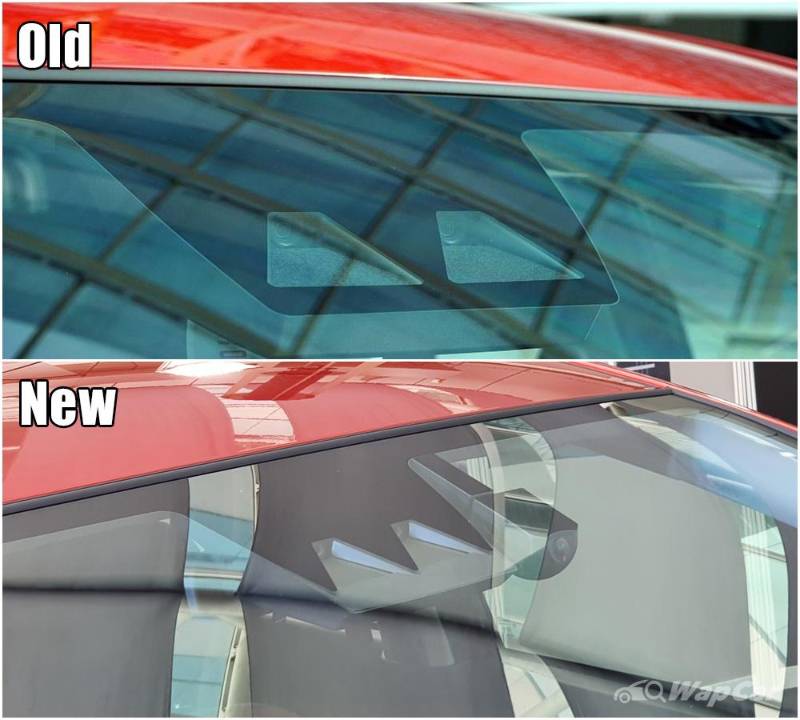 For the first time ever, the Perodua Myvi gets a more comprehensive ADAS suite which is a step-up from its predecessor’s Advanced Safety Assist (ASA) suite which simply consists of an enhanced AEB suite. 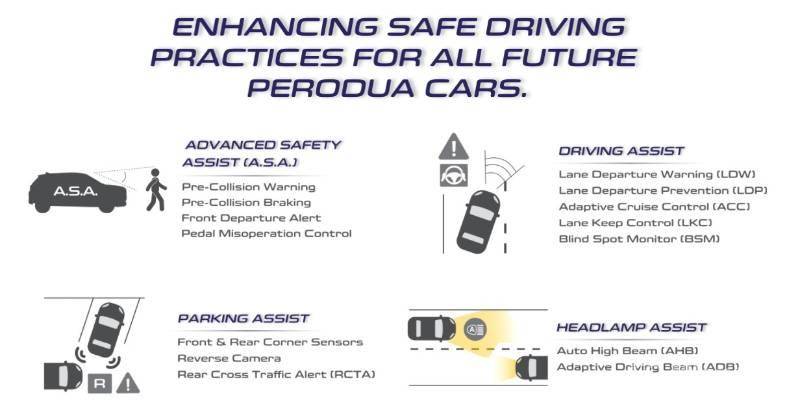 Following on the coattails of the Ativa, the updated King gets the Perodua Smart Drive Assist (PSDA) ADAS suite. ASA now sits under the umbrella of PSDA and is available as standard across all Myvi variants, except in the 1.3 G Basic. 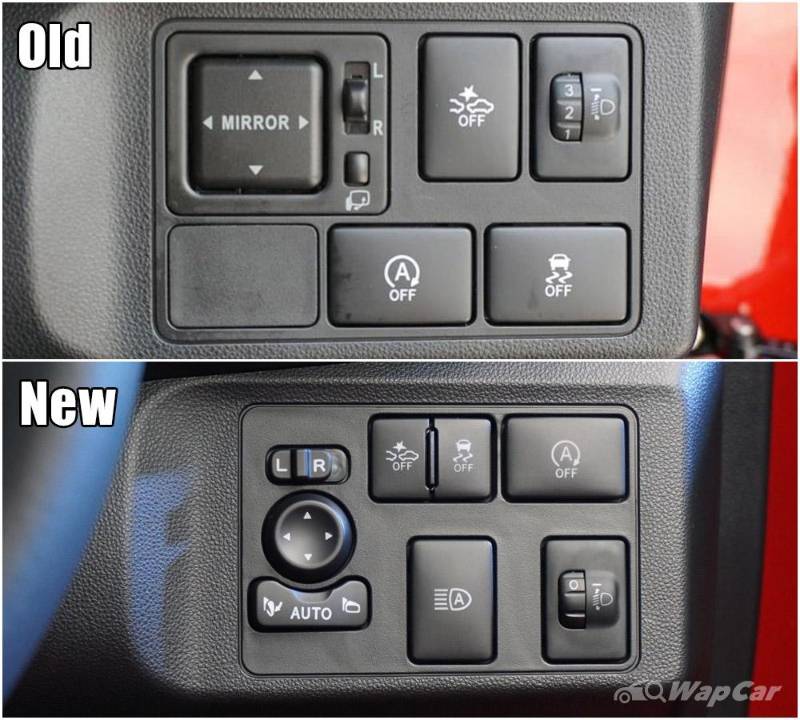 ASA includes Pre-Collision Warning (PCW), Pre-Collision Braking (PCB), Front Departure Alert, and Pedal Misoperation Control. It is worth noting that the ASA on the refreshed Myvi is version 3.0 which can detect and brake against motorcycles as well as bicycles aside from larger vehicles and pedestrians.

Also read: These are the 5 cheapest cars in Malaysia with adaptive headlights

Aside from ASA 3.0, the standard safety features on the new Myvi (1.3 G Basic aside) consist of LDW, LDP, and AHB. It’s an impressive array, to say the least and might be another win for the King.

Conclusion – A surefire winner again for the King 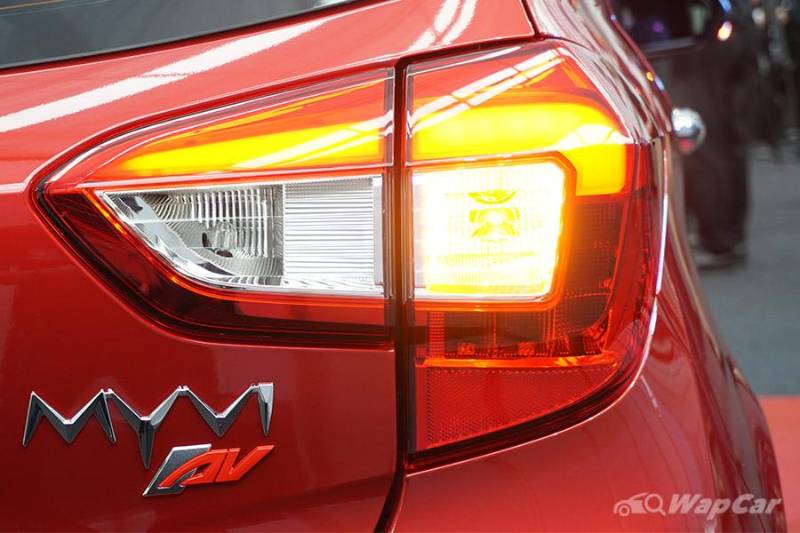 Despite costing more than the pre-facelift, it wouldn’t be surprising to see the Perodua Myvi hold its title as Malaysia’s best-selling car. After all, the refreshed King saw around 3,000 bookings made within a week of its announcement. 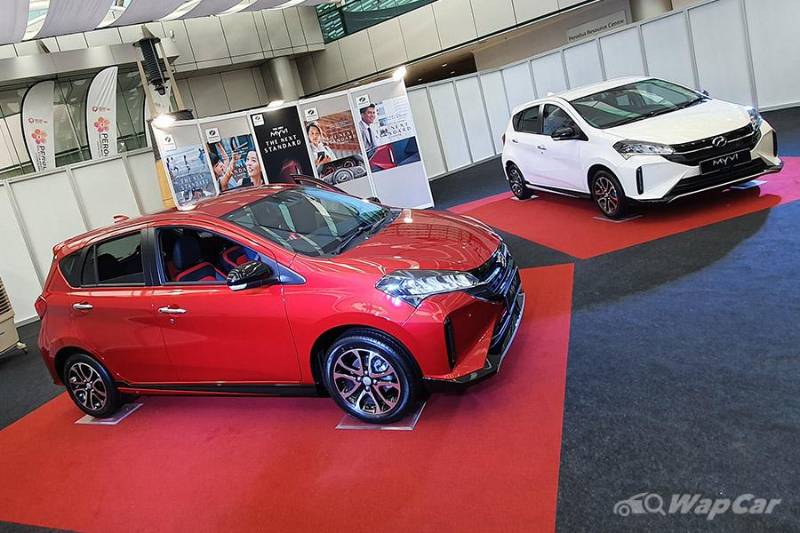 Compared to the old pre-facelift Myvi, it is definitely more feature-packed with a more youth-oriented look and it's interesting to see how well the new D-CVT gels with the Myvi's powerplants. Again, we’ll leave our opinions on the refreshed King for our review.