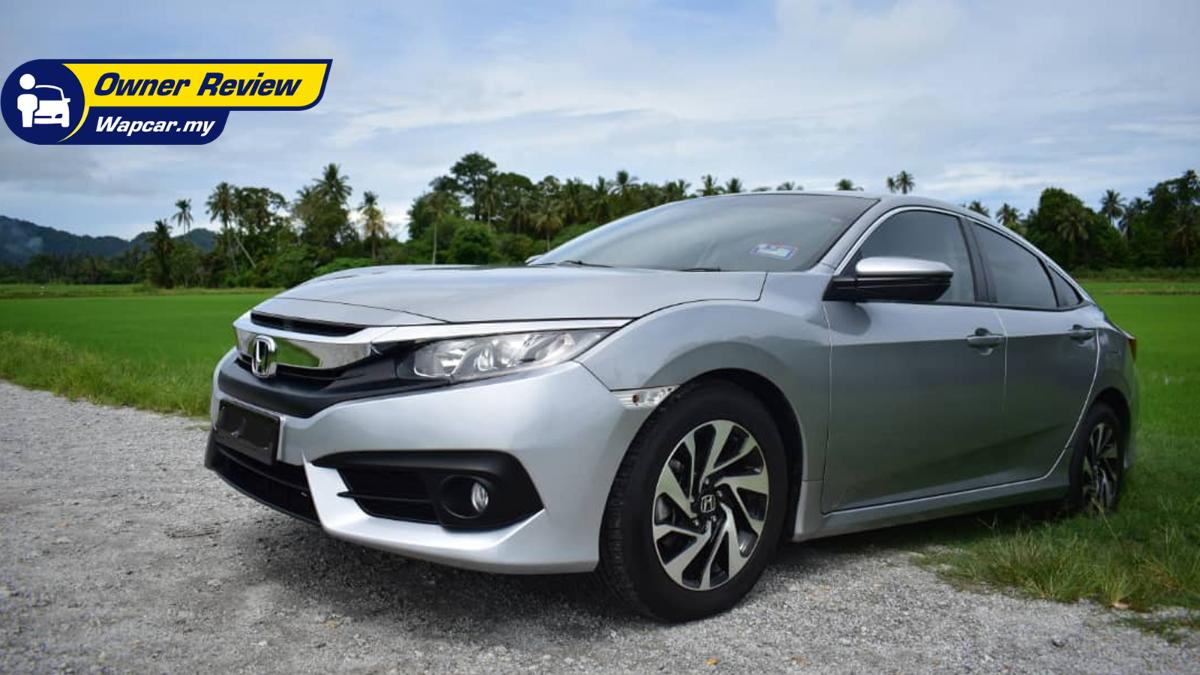 I got married to my wife back in 2018, and as soon as we are married, we are faced with a huge problem. We now own 2 Perodua Myvi. I mean, don't get me wrong, Perodua Myvi is a good car, especially when in town and in tight space and alleys. But, why would you want to own 2 of them? So that's why we decided, let's upgrade one of the Myvi, to a more comfortable cruiser, since we are travelling a lot between KL and Penang, and most of them are day trip. So you can only imagine the kind of stress I have been putting onto my Myvi's 1.5 engine. Not to forget the fact that I tend to ignore the National Speed Limit when I am driving on the freeway, which will cause more stress to the engine.

The reason why I choose this car

So, as I said previously, the reason why I am looking into this new purchase is so that I can upgrade 1 of our Perodua Myvi, just so that we can have a more relax and comfortable cruiser when we cover those long miles of our beloved North and South Plus Highway. So it won't be a tough task for us. Let's face it, Perodua Myvi sits at the very lower end of the Malaysian Car Spectrum(if there is such a thing as Malaysian Car Spectrum). It is very hard to downgrade from that thing. Anything you buy after that thing will most probably become an upgrade when it comes to Highway Cruising. 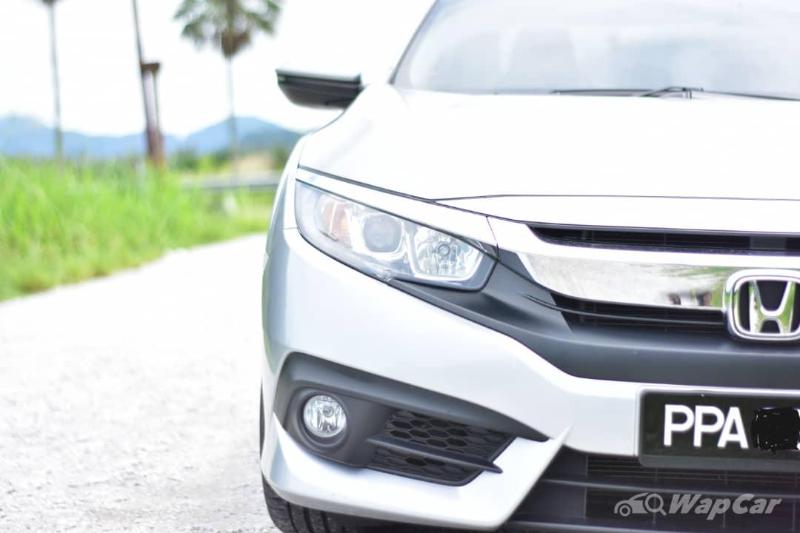 So after a careful consideration between both I and my wife, but mostly my wife will hold the verdict on which car I get to chose(and somehow they said we are living in a democratic world these days), we decided to go with the Honda Civic FC 1.8s. The car cost me RM108,000. In that price category, I don't think I have many options. And the Honda Civic 1.8s are the only Japanese Sedan that I can get all-new at that price point.

Since we got the car, we kept it totally in stock. We only add a Mi Dashcam, install tinted, and change the stock Panasonic battery to an Amaron one, after 18 months of owning the car. That's pretty much it.

It never occurs to me that a car equipped with a 1.8 Litre engine capacity, could do highway cruising so well. But, it's not the engine that is responsible for this achievement. It's actually the CVT gearbox. Prior to owning this car, I never drove any car that comes with the CVT. But my view on them is, they are only for women who know nothing about the car.

In my shallow mind, a man should only drive either a manual, a Conventional auto preferably with 6 forward ratio gearing, or a DCT. But I have never been more wrong in my life. Driving a car equipped with a CVT gearbox has got nothing to do with your gender. You can be a male, a female, and heck even a shemale can drive and fall in love with a gearbox if their intention is only for Highway Cruising. 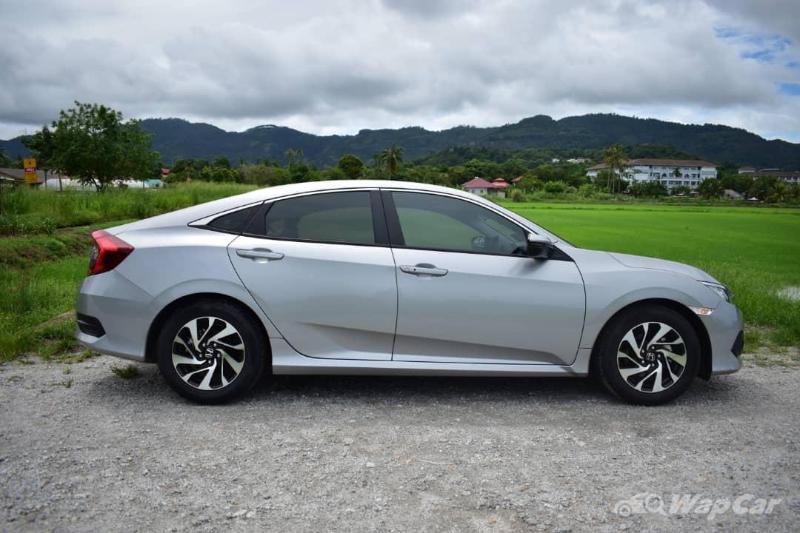 It is only until early 2021, that I came to regret my decision to purchase this car back in 2019. See, the thing is, in early 2021, my wife told me that we are now pregnant(hope you guys will congratulate me in the comment section :-D). Had I know that we will have a baby on our way, I will definitely work harder back in 2019, just so that we can afford the Honda CR-V G5 2.0 instead. With this car, I am just afraid that the Boot Space might not be big enough.

This engine has been in the Honda's line-up for several years already. They are somewhat a proven engine, which I reckon the stock internal could easily do a quarter of a million kilometres. But, I doubt the stock CVT could achieve this quarter of a million kilometres milestone, however. The engine is also somewhat very easy to maintain as opposed to the latest L15B engine. I know the L15B is much much more fun. But, upon realising that I am still the type of person who still barely make ends meet, so I will gladly choose ease of maintaining and reliability, against the so-called fun.

This gearbox is really a thing of marvel for me. It gives me the opportunity to travel at 145kph, onlt just by using 2400rpm of revs. That in return should translate to less cabin noise, better fuel consumption(not high on my requirement list), and last but not least, will cause less fatigue to the driver when we cover long miles.

The cruise control will allow me to stretch my leg during the long journey.

Have you ever sat in a traffic light in "D" for too long, and you decided to switch to either "N" or "P" and pull the handbrake, and now the bloody traffic light now turns green. That bugger of a traffic light. If your car has this Brake Hold function, say goodbye to those awful situations.

I know at these days and age, people will laugh at you for highlighting reverse camera as a feature that you won't brag about. Because most cars are equipped with the reverse camera already. But still, as soon as I come across this feature, now reversing a car without them makes me feel uncomfortable.

After buying this car, I join the FB group for Honda Civic FC. And most people are complaining about the Standard Continental MC5 tyre that came with the car. Of course, if you compare it with a Michelin PS4, these factory-fitted tyres are lousy tyre. But for me, who came from using a Continental CC6(build for comfort and fuel economy instead of grip), this tyre already gives me plenty of grips and confidence, both in dry and wet condition. But, please don't take this tyre and expect it to perform great at Ulu Yam. They are only good enough for layman people like me. 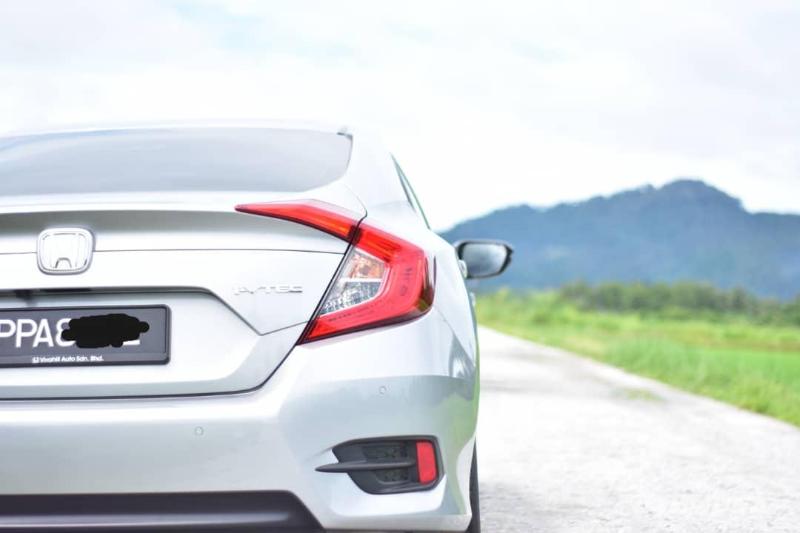 I mentioned in the pros of my car that the Cruise Control is one of them. But, when we take the whole package of the Cruise Control being mated to the CVT gearbox, it makes it less pleasing. See, a CVT gearbox does not have a fixed gear. They instead have a "cone" at both ends, making them able to have plenty of ratios. So, for the instant when I set the cruise control at 110kph on a flat surface road, it will do okay. But as soon as we find an inclined road, both the Cruise Control system and the CVT will act as if I am pointing a gun on their head while saying " by hook or by crook, the 2 of you should keep maintaining 110kph even on this incline". What will happen is, the system will trigger the CVT to change its ratio, causing a huge spike in engine revs. Sometimes, I can see my engine speed spike from 1500rpm to 3500rpm in a split second.

People are so obsessed with horsepower figure. But I on the other hand, don't care much about them. What I care about, on the other hand, is the Torque figure, and how early can we get them. Let's face it, if we use a car on a day to day basis, we will hardly use the car past 3000rpm. Only those who recently hit puberty will want to keep driving at 6000rpm or 7000rpm. The best engine I have ever driven so far is a BMW 2 Litre Diesel. That thing is producing 400Nm of Torque so early in the rev range. I still remember drove at 120kph in the Autobahn but using less than 1500rpm. That was and still is the kind of engine that I like. So this R18A engine is not that great for me when it comes to Torque figure.

When I mentioned CVT was great during cruising, it was the opposite when it comes to acceleration. Have any of you drive a manual car with a badly worn-out clutch? It feels exactly like that. As if the gearbox(metal belt) keeps on slipping. It took ages for the Gearbox(metal belt) to fully engage during acceleration. Putting the Gear in "S" somehow fix this. But the problem with putting the gear in "S" is, it will hold the rpm very high. So, I'd rather have the gear slippage in "D" instead. 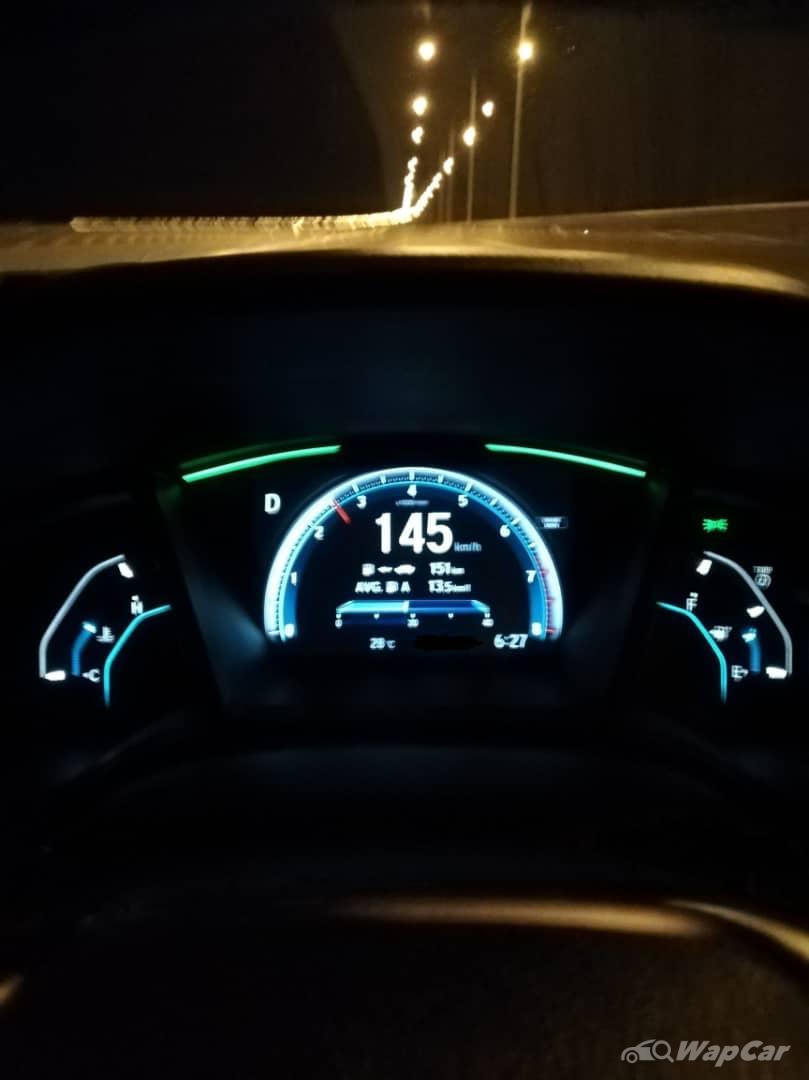 This story is just my personal opinion on this car, and what I expect from it. Of course, everyone will entitle to have their own personal view. A rich fella might comment on my writing saying "this car sucks dude. How can you praise it so much?", another fella who loves to race everyone will say "you are a wuss for driving a CVT and loving it", another fella who loves Perodua Myvi so much will instead comment "you're so dumb for selling the Myvi. The Myvi could do all that as well, if not better".

Like I said, this is just my personal opinion, and how it suits my living lifestyle. Hope you guys won't hantam me. Let's comment reasonably ya. Cheers everyone, and for those Muslim out there, Selamat Berbuka Puasa at 7 pm later, not now.

Thanks to those from WAPCAR for giving me a chance to do this writing. You guys/gals rock.