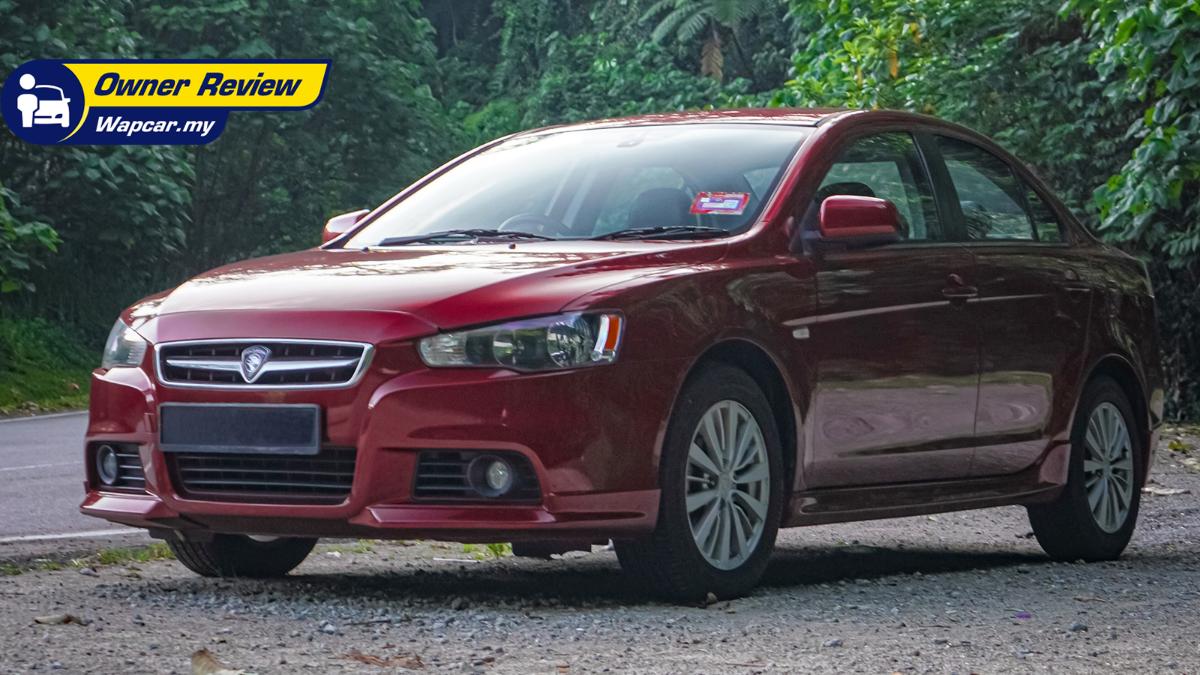 Reason why I bought this car

Ever since I have watched Mekanika Malaysia's video on Lancer GT, it has become my next dream car for the next five years to come. However, after much research and consultation with friends, I had come to the conclusion of buying an Inspira instead.

Things aren't as rosy as it seems. Firstly, choices for a mint-condition Inspira is limited as 90% of the Inspiras sold had some sort of modifications beneath it. However, after one week of research and cross checking with friends, we have decided to water down to two units for testing and inspection.

After testing both units in different locations, I had decided to buy the 2011 Proton Inspira 2.0P from a dealer in Kepong after finding its condition to be immaculate and well taken care of. Despite having it under my own custody for just over a month, I had fallen in love with it. However, it is not a flawless car and let us detailed on these aspects in the subsequent sections beneath. 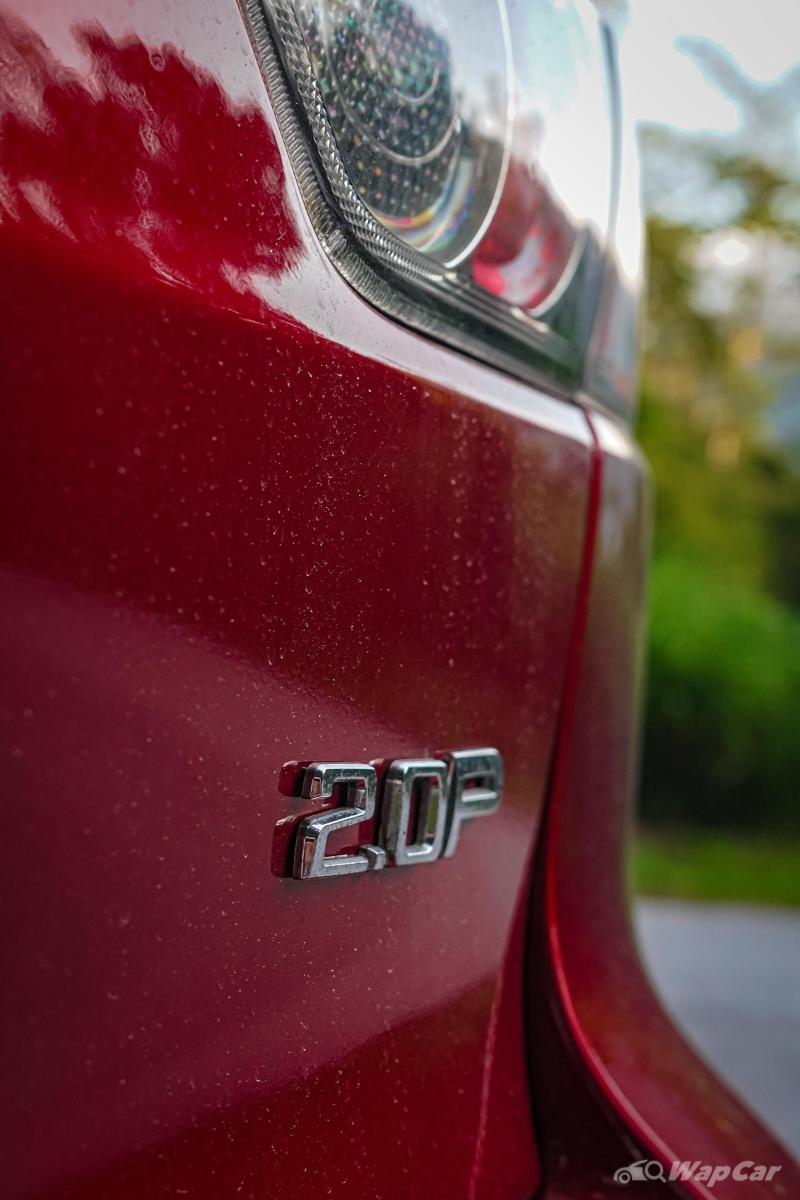 As we all know, the Proton Inspira is a rebadged 9th generation Mitsubishi Lancer that happened as a result of Proton-Mitsubishi's collaboration. It succeeded the Waja in the local market while complementing the Proton Preve concurrently. Hence, it will fight against rivals that include Honda Civic, Toyota Altis and Kia Forte.

The word Inspira derives from the Malay word "Inspirasi", which was translated into Inspiration in English. 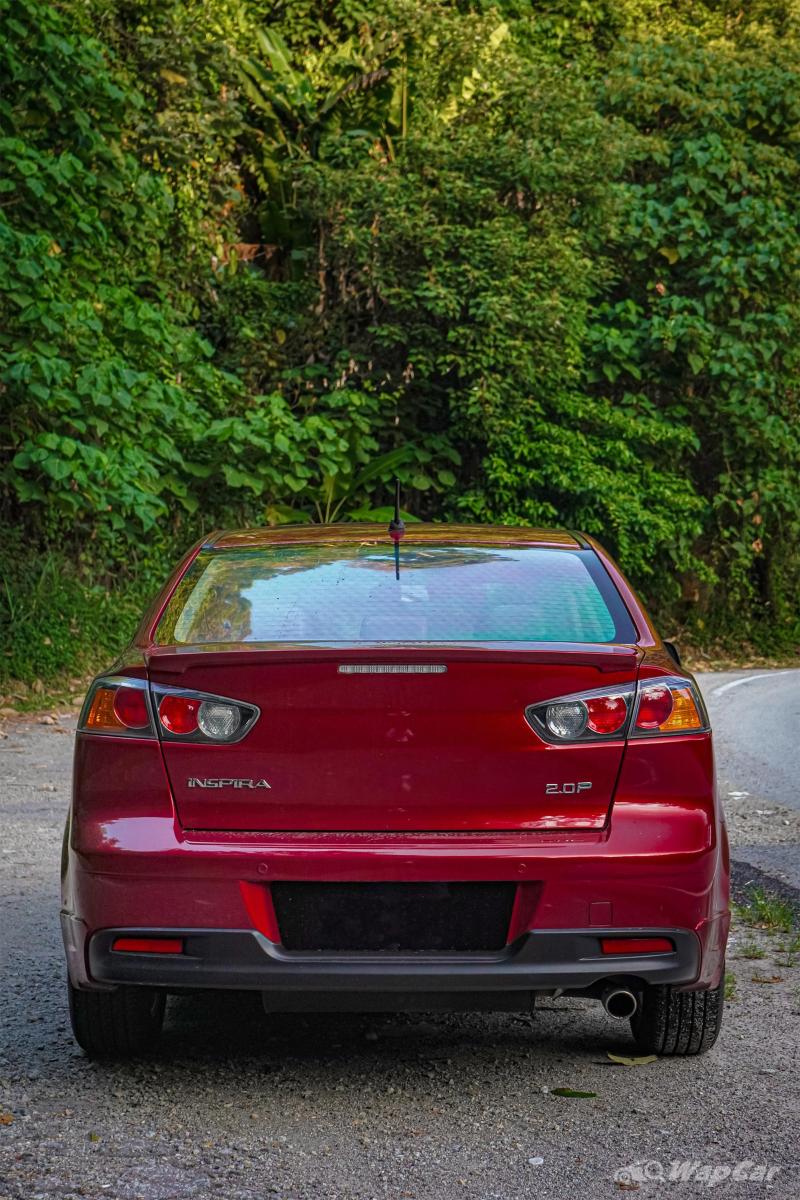 At its launch, the Inspira came in two variants, namely the 1.8 Executive and 2.0 Premium. To be more specific, the car that I bought is an Inspira 2.0 Premium draped in a coat of Plum Red. Engine wise, it comes with a Mitsubishi-sourced 2.0-liter engine that produces 148hp @ 6000rpm and 197Nm of torque @ 4250rpm. The only transmission choice for this variant is a 6-speed INVECS CVT gearbox which I will delve on later. Hence, this allows the car to accelerate from 0 to 100 in 10.5 seconds and able to reach 198km/h before running out of puff. 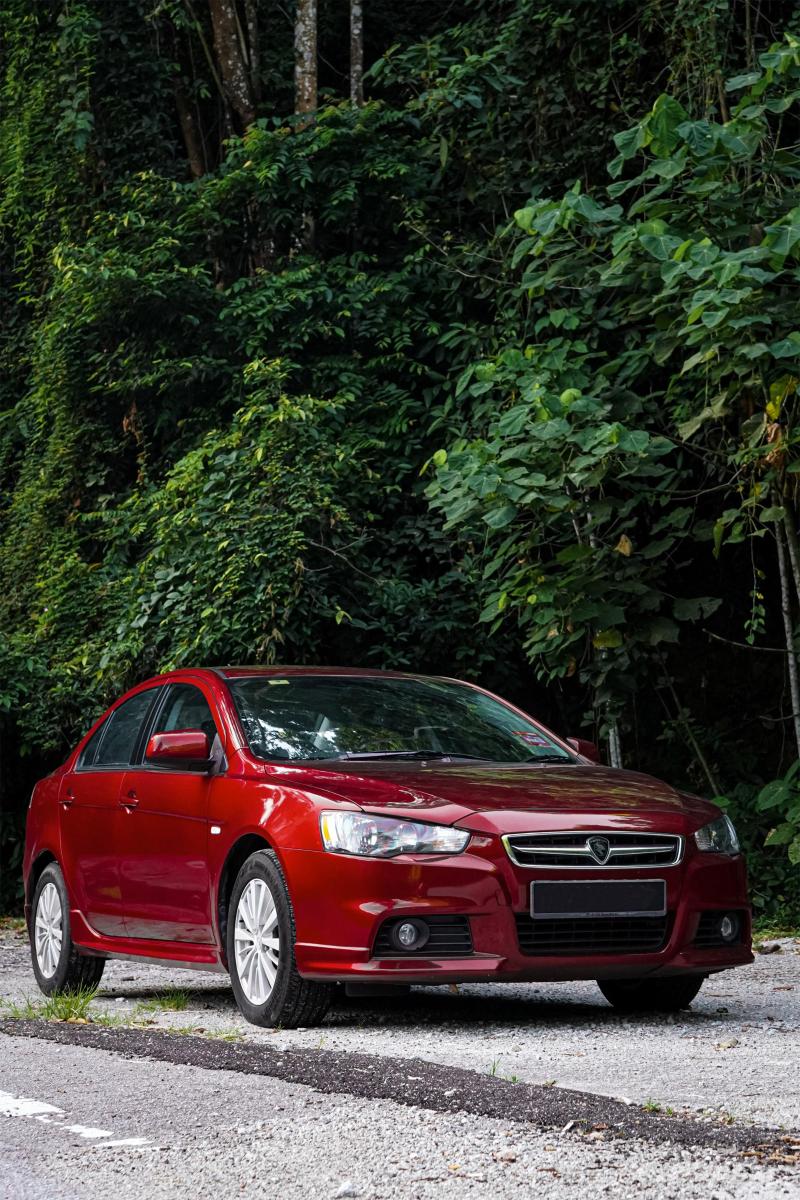 Polarising is the word I use to describe its design. This mainly stems from the fact that it is a rebadged 9th generation Mitsubishi Lancer which stirs discussions/heated debates among car enthusiasts and non-enthusiasts alike. You either hate it or love it, however I belonged to the latter category at this moment.

Sure, it looks like a Mitsubishi Lancer in and out. But, it doesn't mean that Proton has not tweaked a thing or two to give it some Malaysian flair. Some of the parts that Proton had revised include the front bumper, rear bumper and also its rims. In my opinion, the original rims that came with the Inspira look gorgeous and rendered it a classier look. However, I might consider swapping for a set of aftermarket rims in the future. 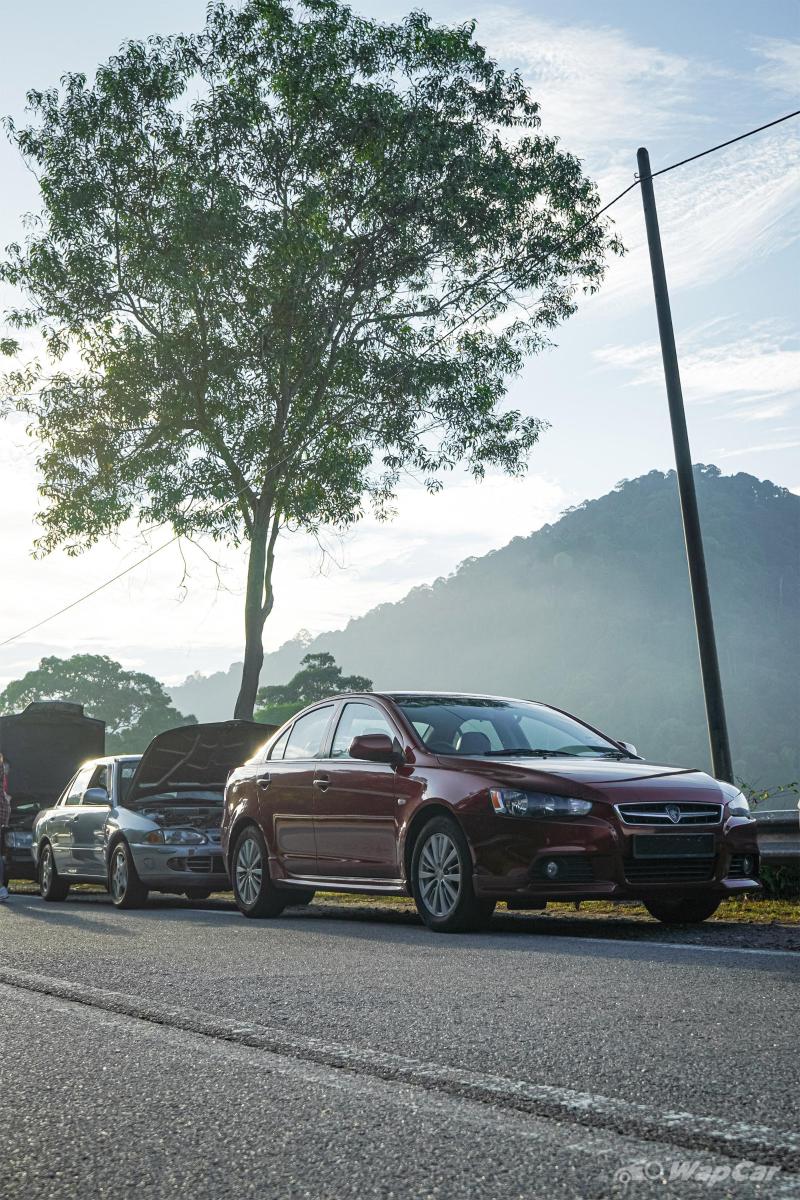 For a car that costs about RM90,000 back then, there ain't nothing much to comment about it other than hard plastics on top of the dashboard and a center console that looks dated in this decade. However, rivals back then performed similarly when it comes to interior and this is nothing to be made into a big issue as well.

Stepping into the car, it felt a tad narrower and less airy than other rivals but I find this good for focused driving whenever you are driving spiritedly in places like Kuala Klawang or Ulu Yam back roads. However, the size of the car can be a nightmare too especially when I am navigating the car to enter my home's porch or tight parking spaces whenever I have to commute to Bangsar for work. As for the rear compartment, it definitely feels smaller and you don't notice from outside. However, I cannot comment much on it since I have just got this car for less than a week.

Before I move on to discuss features, I will like to include a brief verdict on how I felt of the interior of this Inspira. The car looks premium other than the huge area of hard plastics on top of the dashboard. Leather-cladded seats had helped to elevate the interior into something that looks high-end and not to forget it supported me well during driving. Last but not least, the doors are quite heavy and this rendered it a much more solid feel for the vehicle and you won't find yourself short changed after spending much money on it. 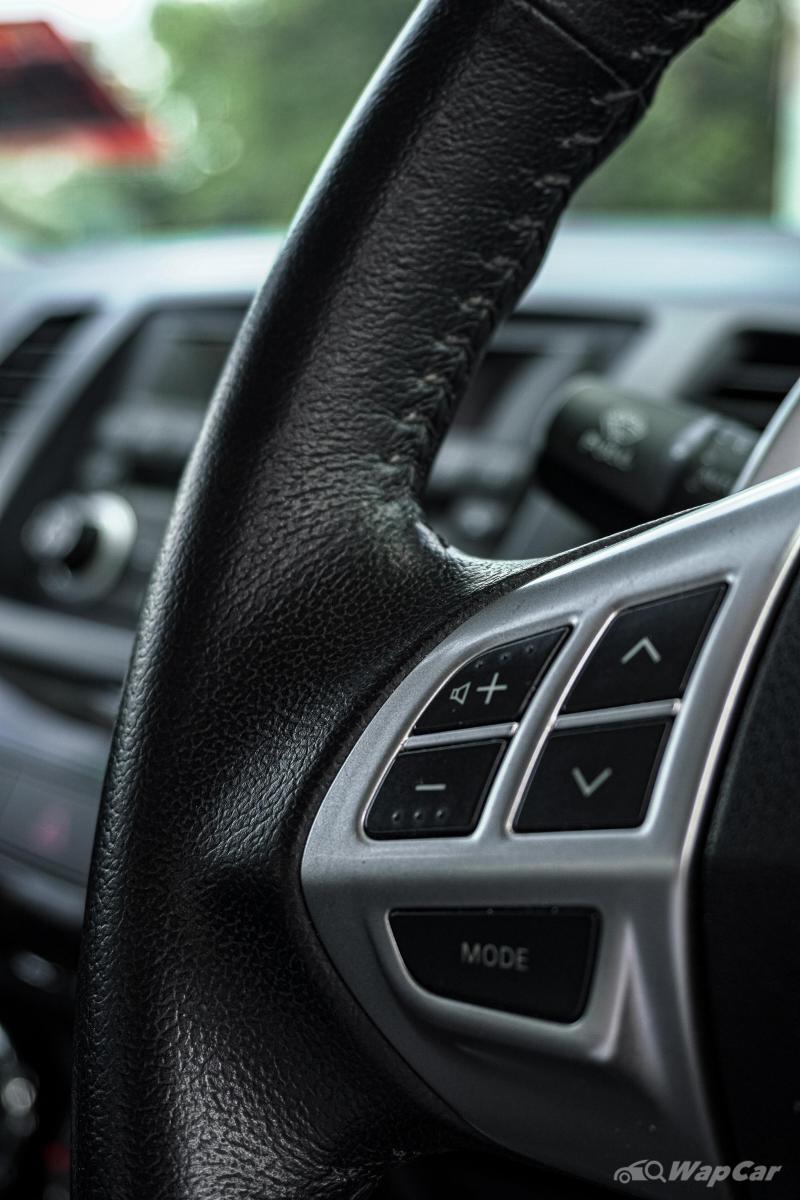 Feature wise, I have yet to explore everything in the car but one thing that I used a lot for these few days is cruise control. It allowed you to set the car to run at a certain speed without pressing on the throttle. This is a lovely addition which adds another 20-30km into the estimated fuel range. Hence, reducing the frequency required to stop by at petrol station

Additionally, the car comes with Bluetooth connectivity and I had it tried out. It allowed me to connect my phone to the audio unit of the car and played my favorite music while driving be it on my back home or heading to somewhere else.

Another feature I find very useful is the multi-button steering wheel which allows me to adjust parameters like volume, radio station frequency and also activation of cruise control without having to divert my attention towards the center console.

Despite these lovely additions, however, I do miss out on some features that I have taken it for granted while driving the Bezza. Firstly, I had missed the USB ports found readily in the Bezza which allows me to charge my phone easily. The immediate remedy is to find an adapter to the Type-C cable so I can charge my phone while driving. Additionally, the absence of teh-tarik hooks on the Inspira means I cannot hang my teh-ais bungkus or mixed rice in the car and this might pose a risk of overspill if I brake too hard. 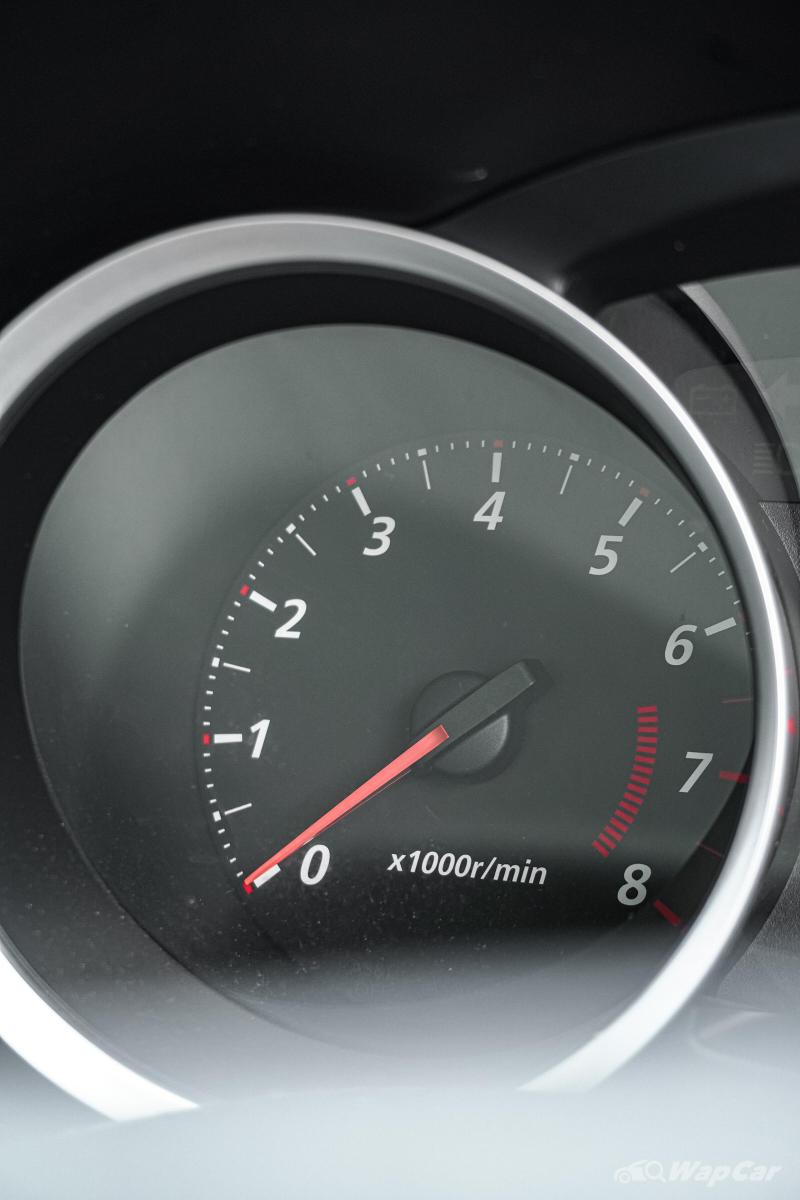 To date, I have covered about 350km in the car and have another 140km left before another visit to the petrol station.

Additionally, ever since close to a month of ownership of the car, I had found the fuel consumption to be quite excellent for a 10 year old car. I had managed to eke out an average of 450km of mileage from a single pump and this brings me to places like Shah Alam, Klang, Hulu Langat B-roads and many more other places. 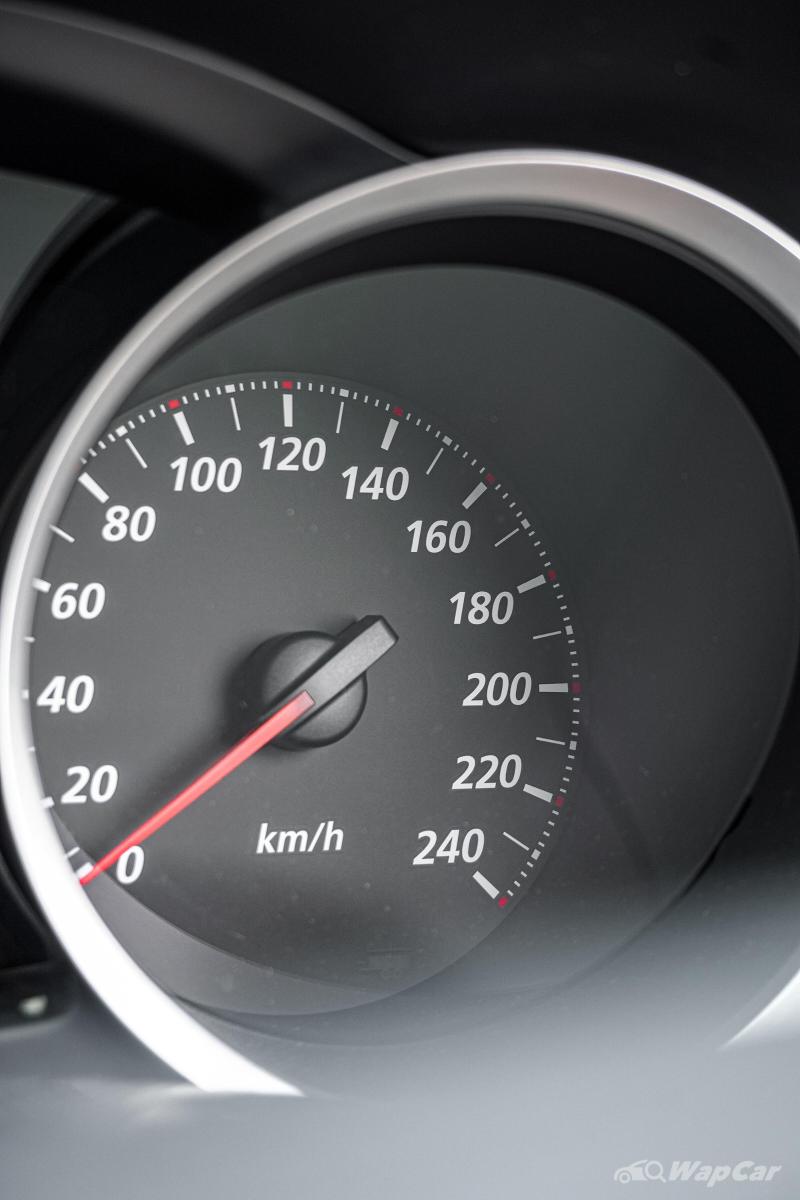 The boot-space is sufficient (420-liters) but way smaller than 508 liters that I used to have in a Perodua Bezza. I have yet to try out the capacity of its boot but judging from its size, it is quite shallow due to the placement of a full-size replacement tyre underneath the storage compartment. The only comment I have on its boot is the lack of a safety net which you can use to hold smaller items and prevent it from sliding inside the boot during driving. 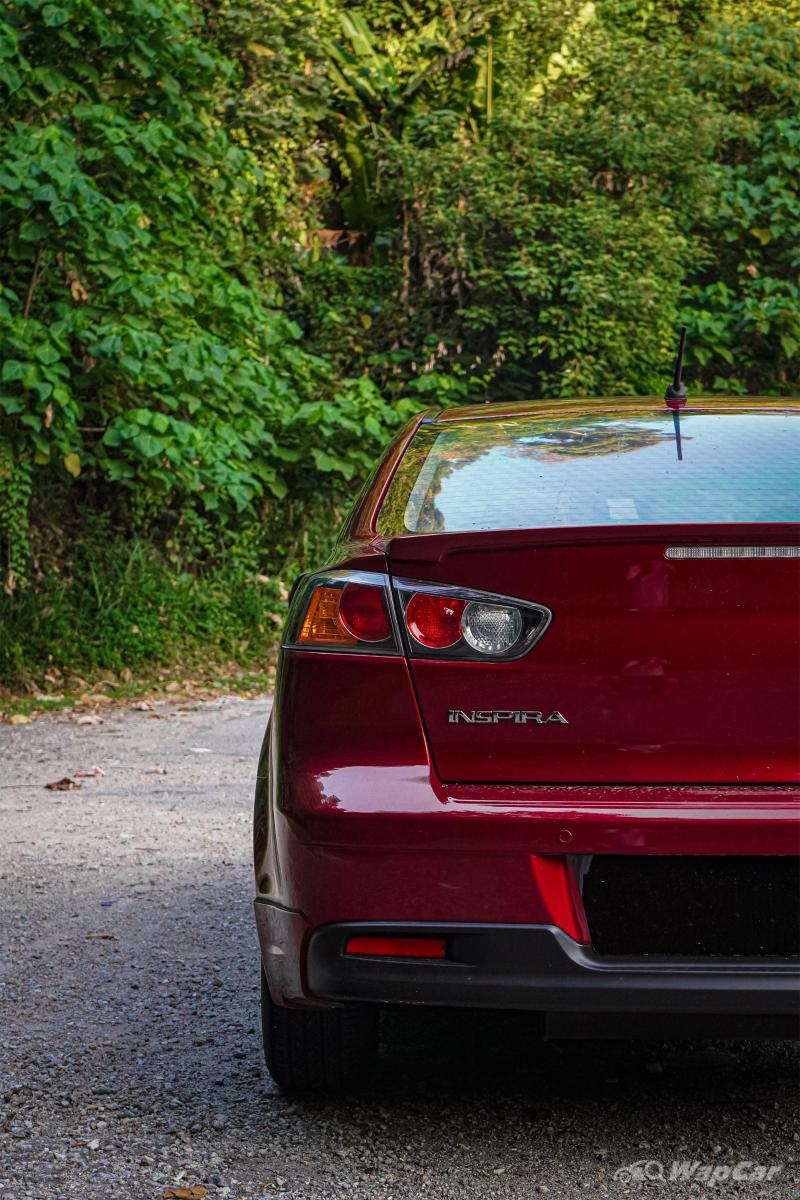 Based on the 9th generation Lancer with mechanical bits unchanged, the Inspira is a car that gives its driver confidence to push more regardless of straights or bends on Kuala Klawang. The Inspira handles well and pliant is the word I will use to describe it. It is comfortable enough for a daily runaround while it inspires you to push harder when you take it for a touge.

The car doesn't have much body roll to begin with and this allows me to tackle corners at a higher speed. Additionally, the engine is very responsive where you can feel the power being delivered once you pressed the throttle. This is something we car enthusiasts will like to have as it is not only useful for spirited driving, but also on B-road overtaking situations where power is needed to pull away from the slower cars.

Steering feel is precise for the car and I love how meaty it feels. Although some might complain it's heavier than usual steering feel but I have no issue with this. In general, I will rank the driving dynamics of this car at 8 out of 10 marks as it is an affordable car that gives me a wide enough grin whenever I drive. 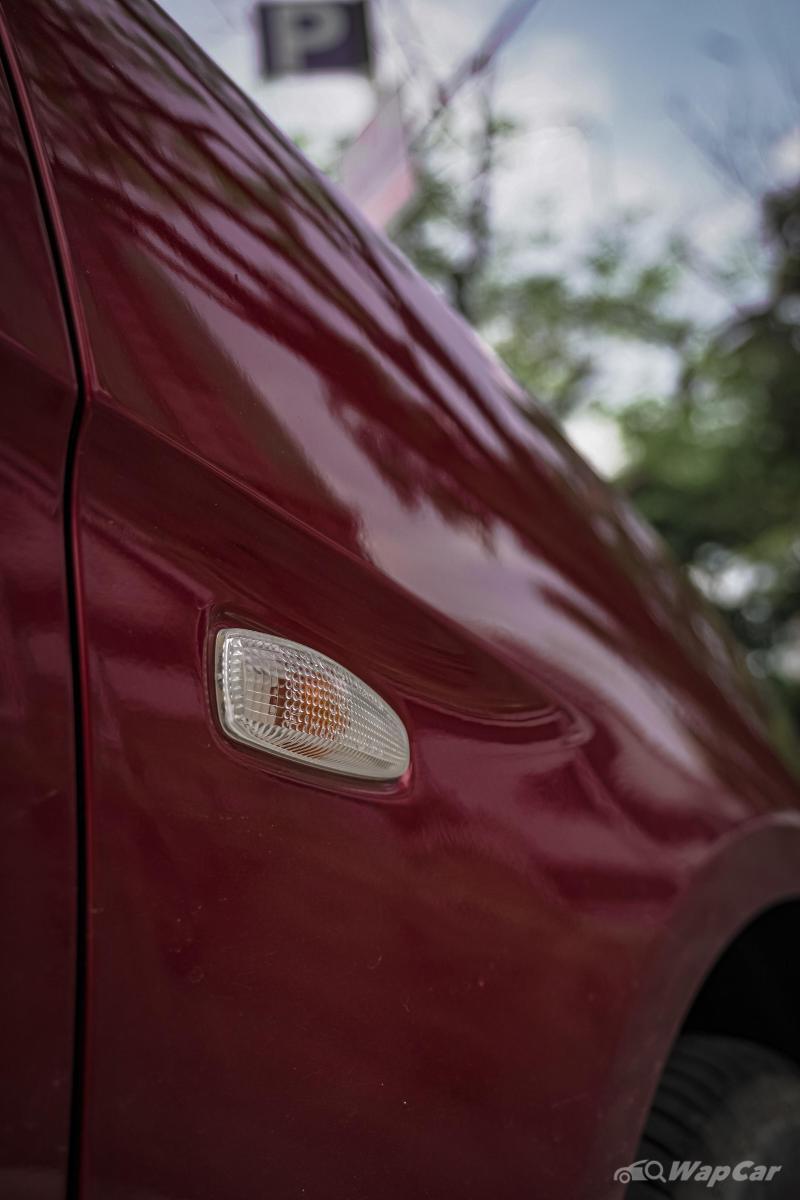 As for maintenance, I will not cover it in detail yet due to my short tenure into the ownership of this Inspira. At this moment, I did a major service which includes change of spark plugs, air filter, oil filter, engine oil, CVT fluid & CVT filter. These had cost me RM1000 and fortunate enough to had an experienced mechanic to do it for me.

The next maintenance will be due in another 7000km where I will drop in for another engine oil change to keep things running smoothly. However, I will not shut off vehicle upgrades in the future to make it a better handling vehicle. 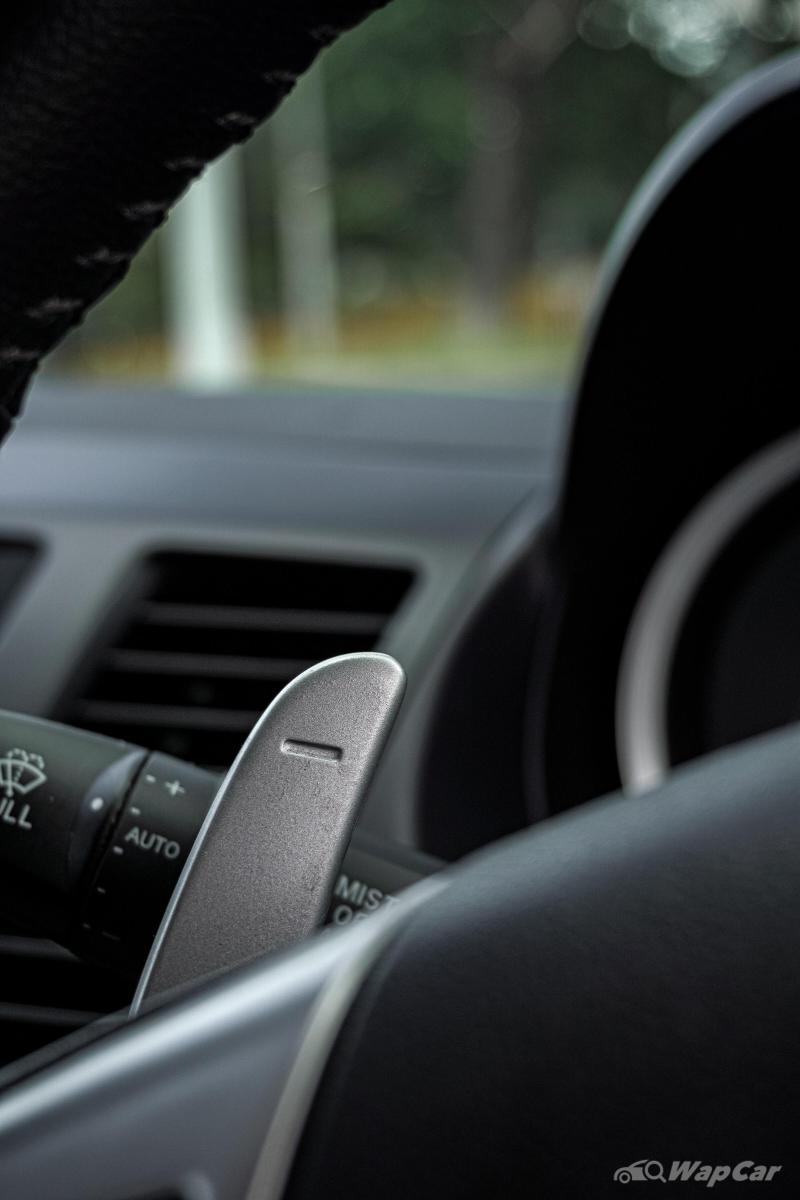 Overall, I will rate my Inspira 7 out 10 after considering every factor mentioned above. Firstly it definitely is a better car to drive and immerse yourself in touge run to begin with. Additionally, it comes with features you hardly get on a car at the same price bracket back then. Furthermore, the handling is solid and the engine is responsive which helps to even add more marks towards this car.

On another hand, there are some downsides to this car as well. It looks quite small for a C-segment car and maintenance was known to be on a slightly higher side as opposed to other vehicles. However, I cannot comment much and this can only be told when I had put more mileage into this car.

Last but not least, Plum Red is definitely the go-to colour for this Inspira and it definitely will turn enthusiasts' heads whenever one drives by. Furthermore, I have driven it to various teh tarik and beer sessions where my friends are quite impressed with what it is capable of. With this, I will end my writing here and stay tuned for another long-term review after I had racked up more miles in my new ride. 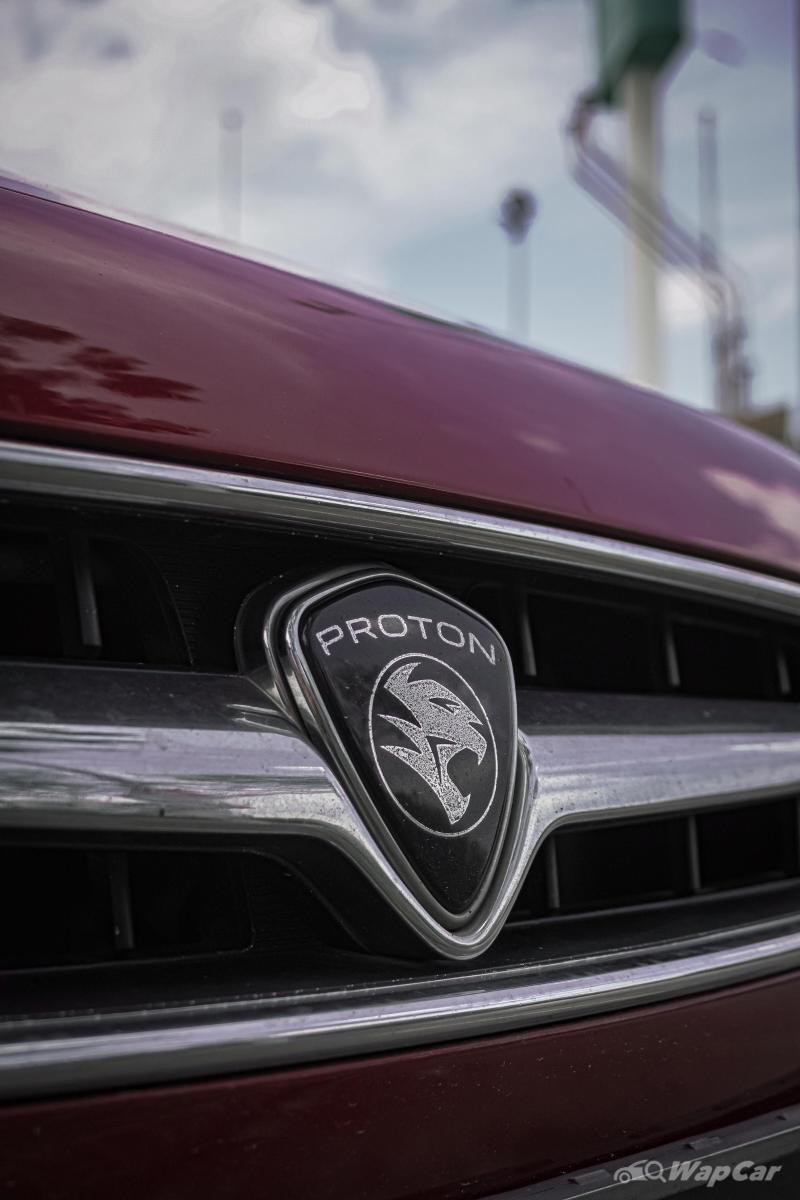