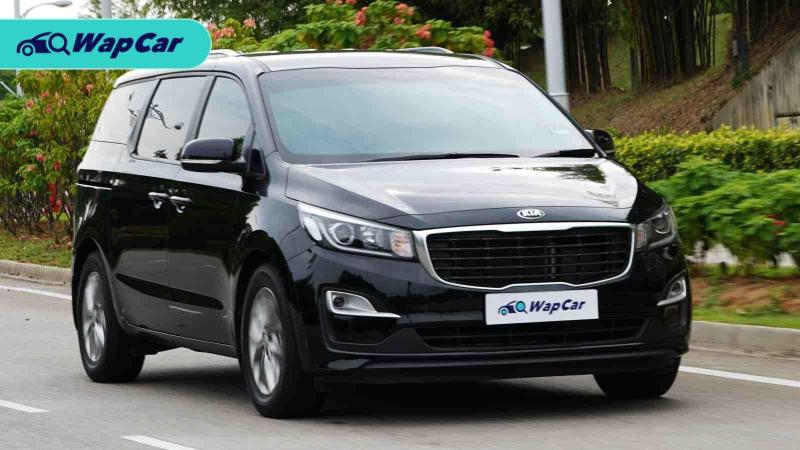 Since its introduction back in 2017, the Kia Grand Carnival has been the head-turning MPV that many coveted. And to add to that it also came with an ultra-comfortable interior along with a powerful turbodiesel engine with power outputs that put most cars to shame. In 2020, Naza Kia Malaysia gave the Grand Carnival yet another update so it now boasts 11-seats but was it a wise decision? 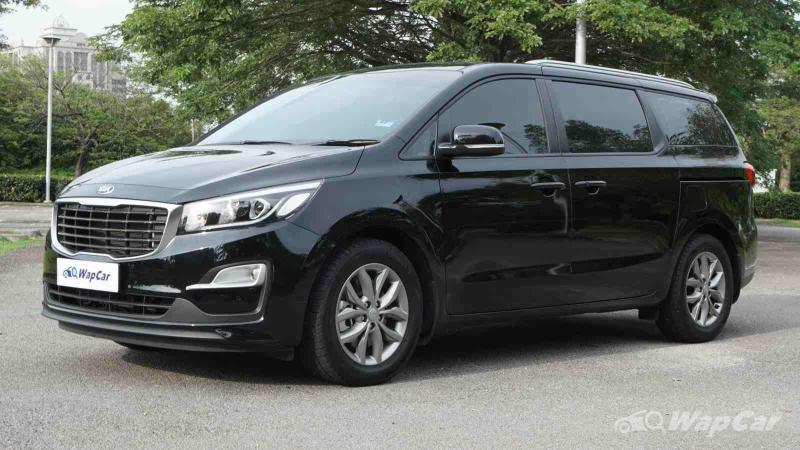 The Pros – powerful engine and steering with plenty of feedback

The third-generation Kia Grand Carnival is still one of the most stylish MPV you can get on the market. The bulky design is as stylish as before and will still turn heads every time one spotted the behemoth on the road. 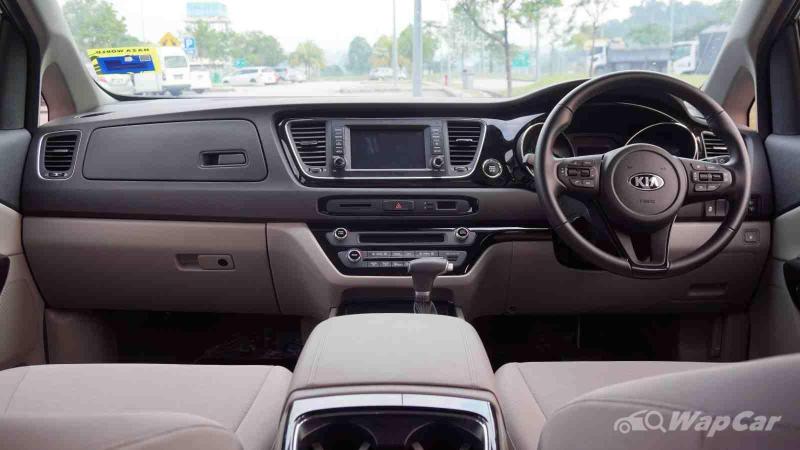 It is still a perfect mix of form versus function with electric power sliding doors, 3-zone air-conditioning and plenty of USB ports to go around. 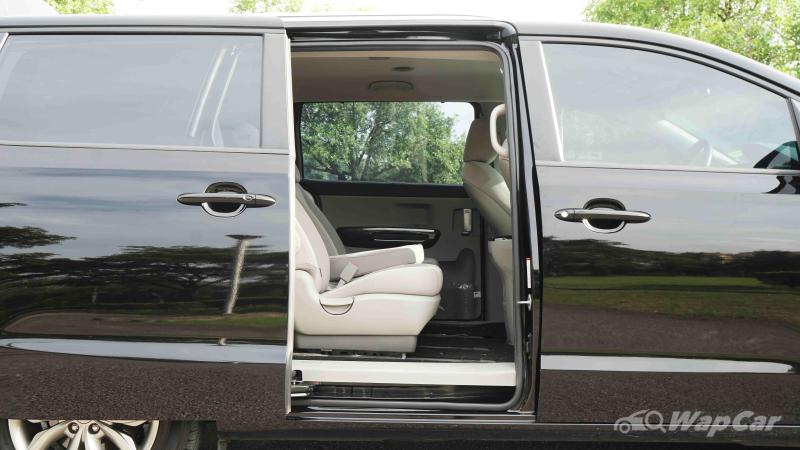 The Carnival also has superb handling that makes you feel connected to the road with plenty of feedback. You can easily forget that you’re driving a 5,119 mm long car as the steering is lacking that heavy feel that most MPVs have. 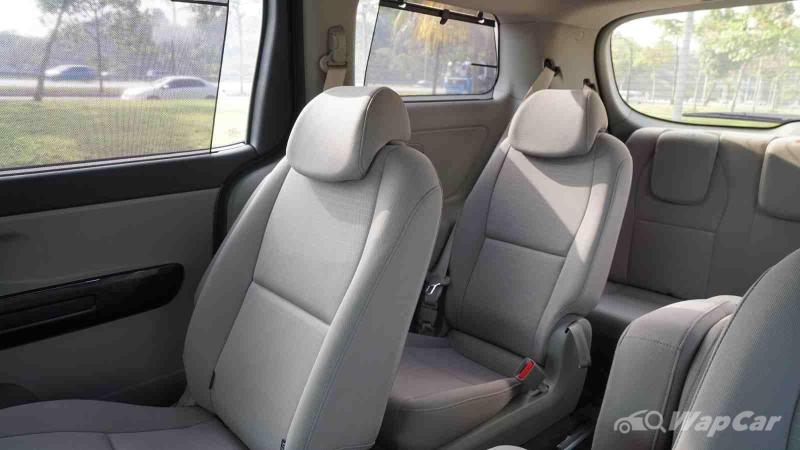 Another winning factor of the Carnival is the 2.2-litre turbodiesel TCI engine. The engine dispenses 200 PS and 440 Nm and is mated to an 8-speed automatic gearbox. 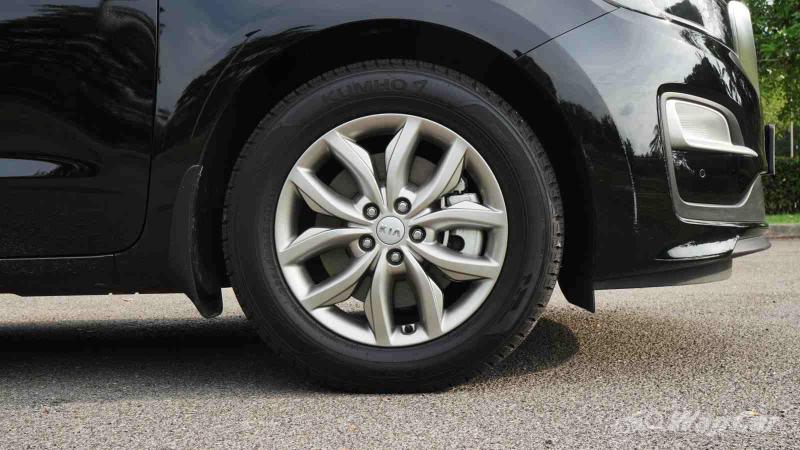 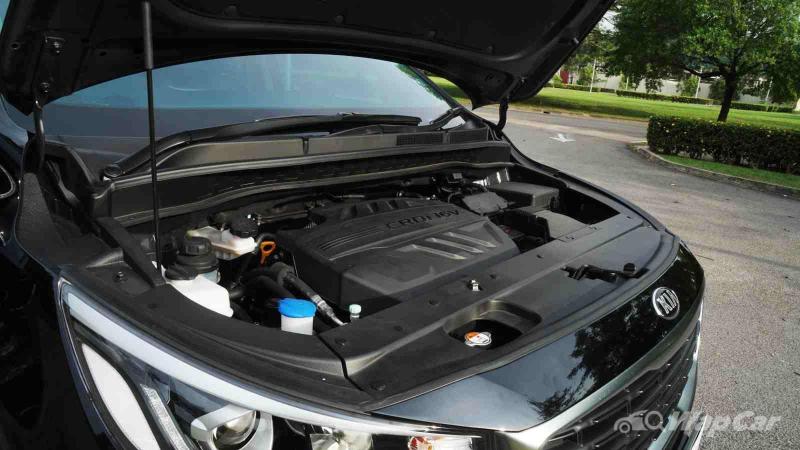 It is also a very fuel-efficient MPV as based on our real-world fuel efficiency tests in a mix of highway cruising and stop-go traffic, the Carnival’s 2.2-litre engine returned 7.1-litre/ 100 km. 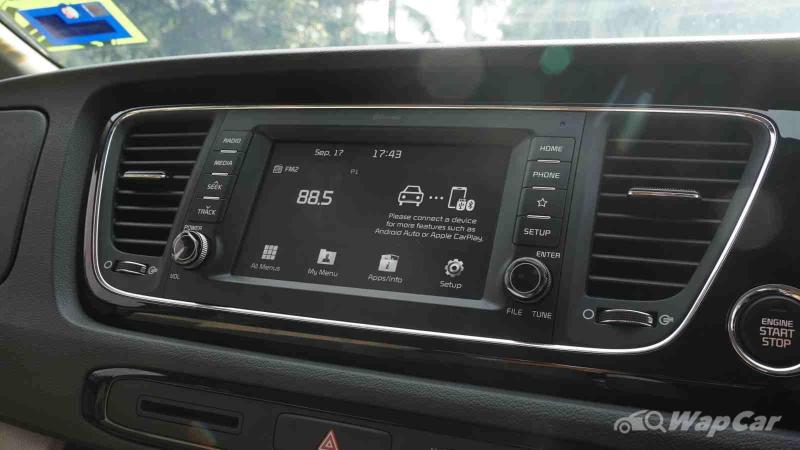 Kia has also equipped the MPV with a 7-inch touchscreen panel that comes with Android Auto and Apple CarPlay connectivity. We're happy to report that the Android Auto works perfectly fine. 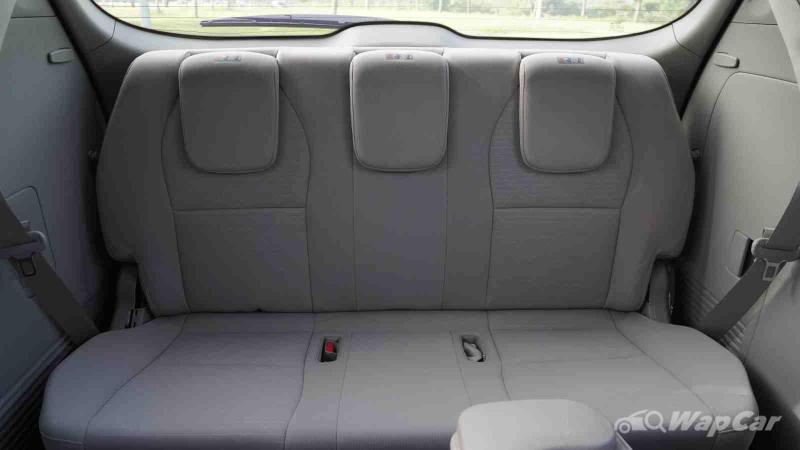 Well, save to say that we are mind-boggled by the latest update. In the 2020 update, not only did Naza Kia Malaysia include a fourth-row seat, but they also undid the comfortable leather seats. 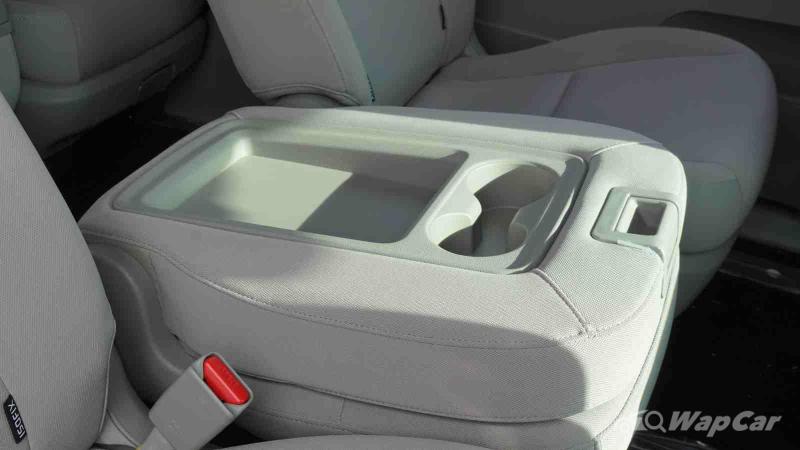 Yes, the stylish leather seats are no longer available, and in its place are grey fabric seats. While the material is soft on the skin, it is also the type that seems to absorb any kind of stains, regardless if it came from drinks, foods, or footprints. 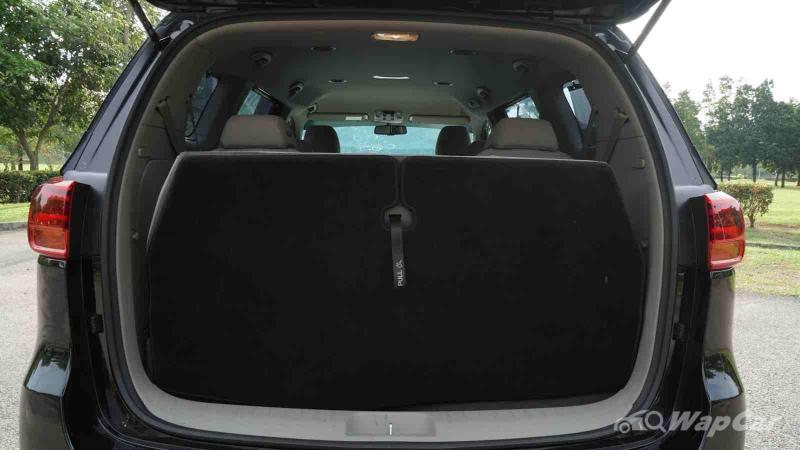 Another con to add to the list is the lack of boot space. Back when the Carnival was still an 8-seater, it was applauded for its smart use of boot space with the deep basin-like design. But now that space has made way for the fourth-row seats and doesn’t have a boot at all. 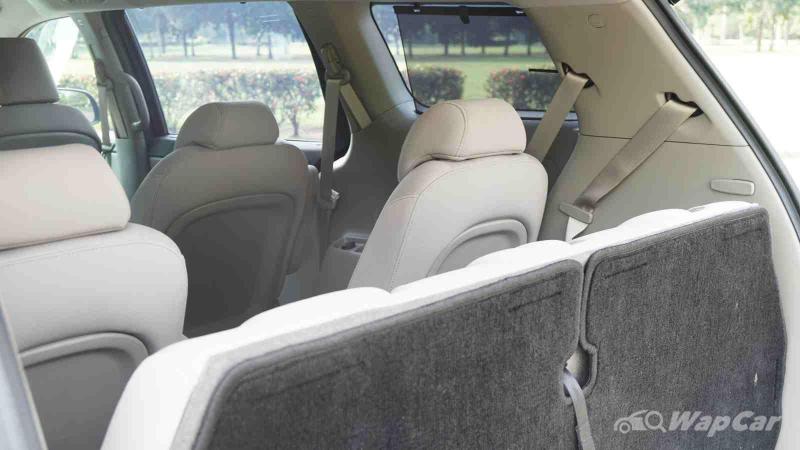 Even if the fourth-row seats are not deployed, the boot space you get is not phenomenal. 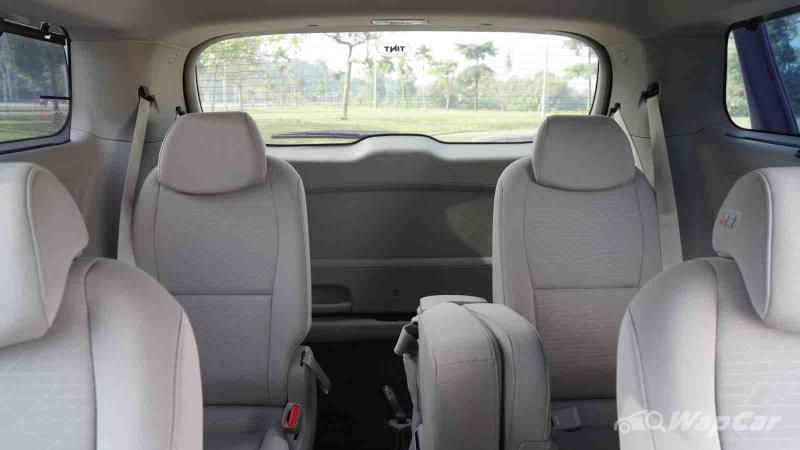 Also, Kia did not extend the length of the MPV. So all passengers from the second to fourth-row seats will get very little legroom. The sitting position also makes one feel like they are squatting in the car rather than sitting. 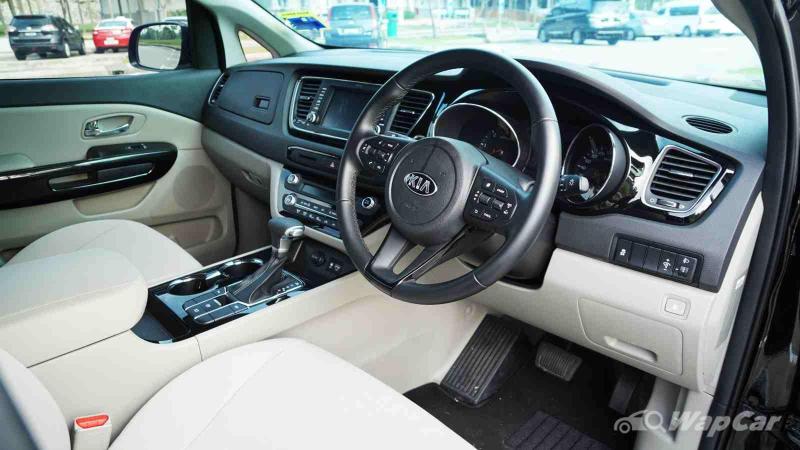 And as for the fourth-row occupants, they are in for some head-banging against the rear wind-screen whenever the MPV goes through a rough patch of road. Luckily, the Carnival is rather talented in ironing out imperfections. 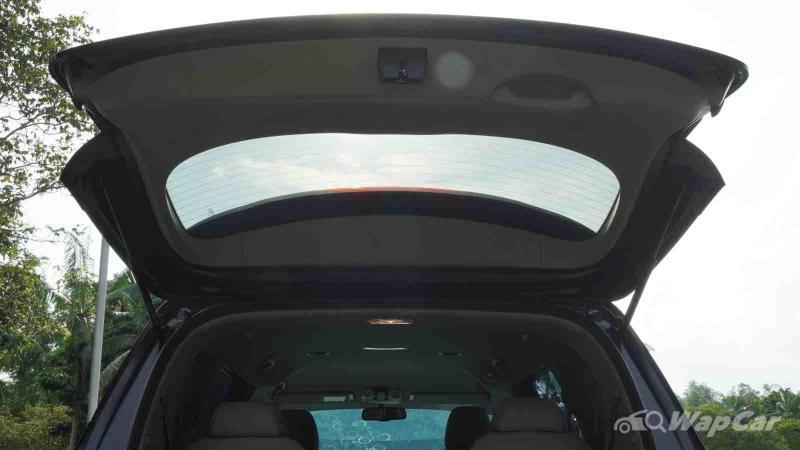 Did we mention that Kia has also done away with the powertailgate feature? The horror, we know.

Unfortunately, the Carnival is still lacking modern parking aids like 360-degree monitor, with the MPV measuring at 5,115 mm long, it actually measures longer than a standard parking lot in Malaysia. 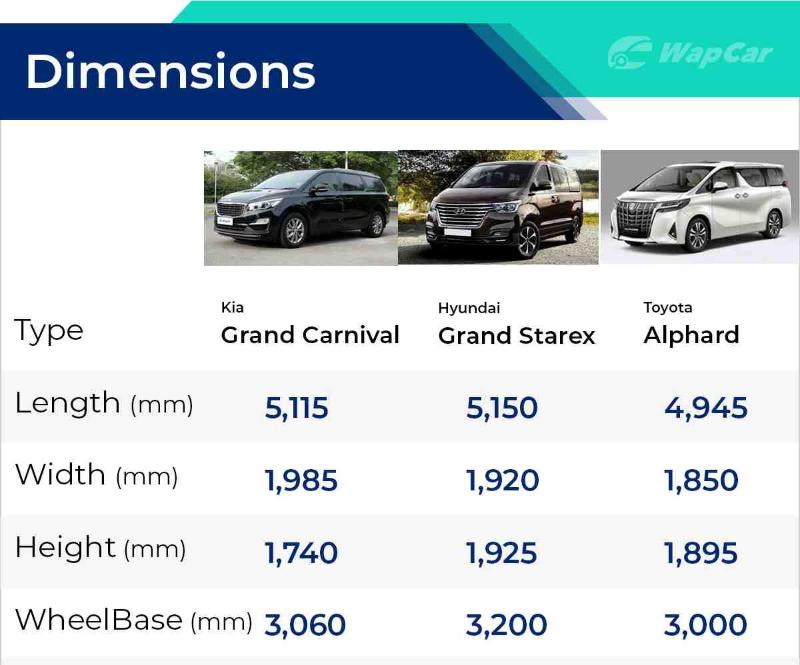 It also doesn't help that the MPV measures 1,985 mm wide, making it even harder to park the car. For reference, rivals like the Toyota Alphard measures at 1,850 mm while the Hyundai Grand Starex measures in at 1,920 mm.

While the Kia Grand Carnival is beginning to show its age, we are still very enamoured by this large MPV. 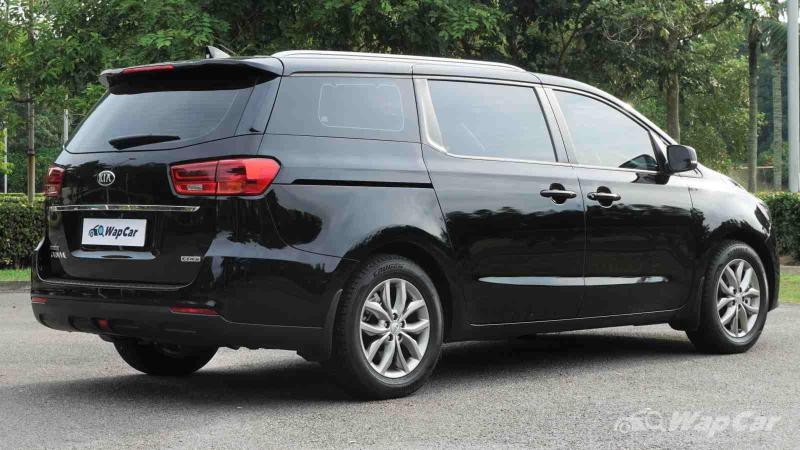 Sure, according to this list, there are more cons than there are pros to owning the Kia Grand Carnival. And to add on to that it also lacks ADAS, 360-degree camera, and even Blind-spot monitor, all of which will be useful safety features for such a large car.

But for a price of RM 179,888 (it's actually lower than the previous 8-seater range-topping variant priced at RM 189,888) and you can ferry around a whole football team of 11 people in 1 car, the Kia Grand Carnival is still good value for money to us.