HomeNewsPros and Cons: 2022 Honda HR-V e:HEV RS, is it better than the Corolla Cross Hybrid?

Pros and Cons: 2022 Honda HR-V e:HEV RS, is it better than the Corolla Cross Hybrid? 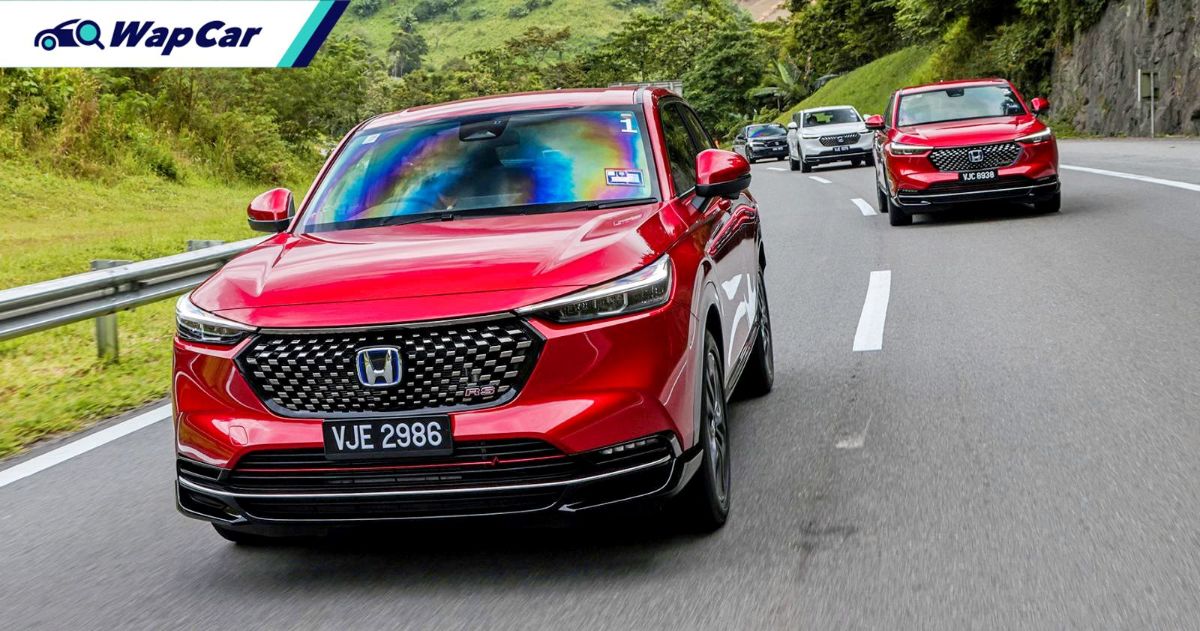 The 1.5-litre Honda HR-V e:HEV RS is separated from its chief rival, the 1.8-litre Toyota Corolla Cross Hybrid, by just slightly over RM 800. The Honda sells for RM 140,800 while the Toyota asks for RM 139,991. Ignore the difference in engine sizes because the 1.5-litre Honda hybrid is boosted by a much more powerful 96 PS / 253 Nm motor, versus the 1.8-litre Toyota’s 72 PS / 163 Nm motor. Toyota’s hybrid is based on the concept of an ‘engine first, motor second’, while Honda believes in the opposite. 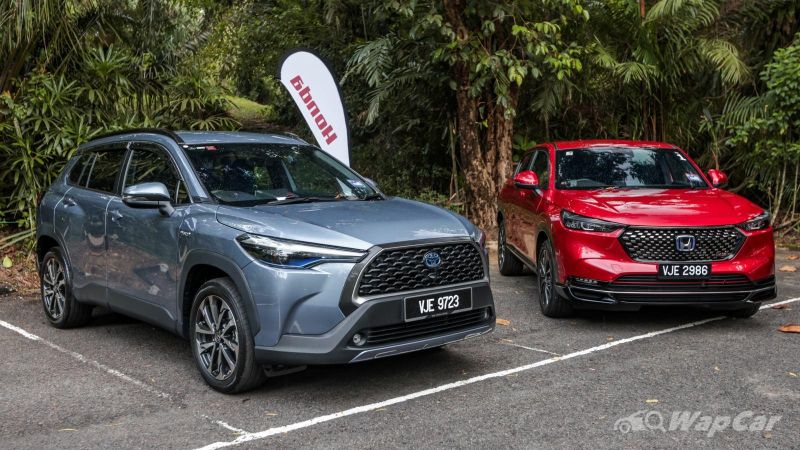 For all intents and purposes, both the HR-V and Corolla Cross hybrids are evenly matched and every savvy buyer shopping for the Corolla Cross Hybrid should also experience the HR-V hybrid (Honda calls it e:HEV) for themselves before signing the dotted line.

This post will focus only on the hybrid variant. If you are still on the fence on which of the 3 engine options available in the HR-V is best for you, read this first. 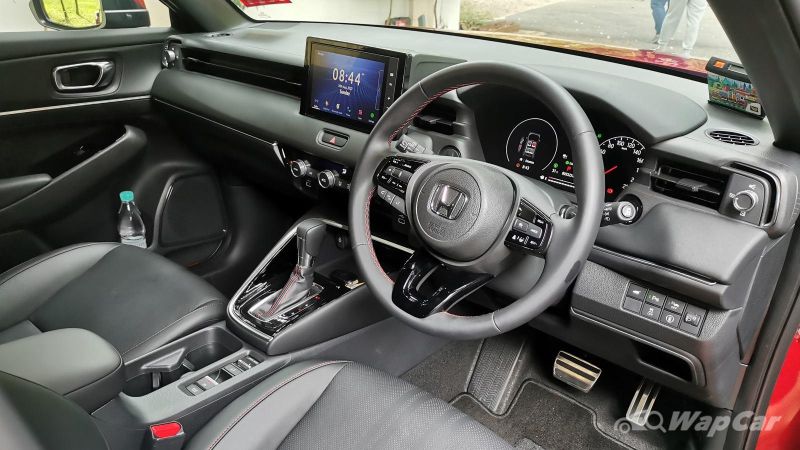 To be clear, the Honda HR-V RS’ interior doesn’t feel like it’s worth RM 140k. One just need to look a similar priced Honda Civic (RM 131k – RM 151k) to be reminded how interiors of cars at this price point should look like. 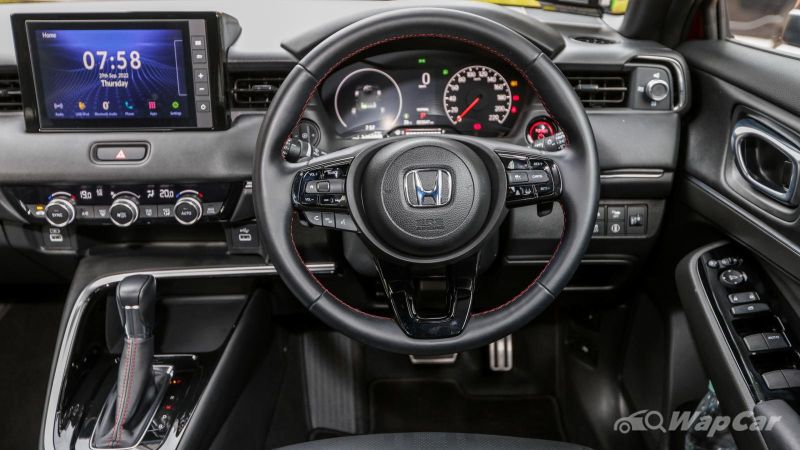 But unless you are cross shopping with the Civic, the HR-V's interior is lightyears better than the Corolla Cross’ awfully cheap looking cabin.

Like the Civic, the HR-V’s knobs are finished with nice bezels, and the dashboard is wrapped in soft, non-reflective material, which is greatly appreciated in our climate.

The front-side air vents also have an air curtain mode which helps keep the front cabin cool. However our test car didn’t had any tinting on the windows so it’s cooling effect wasn't that great.

As a bonus, the Honda isn’t any less practical than the Toyota. More on that later.

Pros: Infotainment is much better than Toyota’s 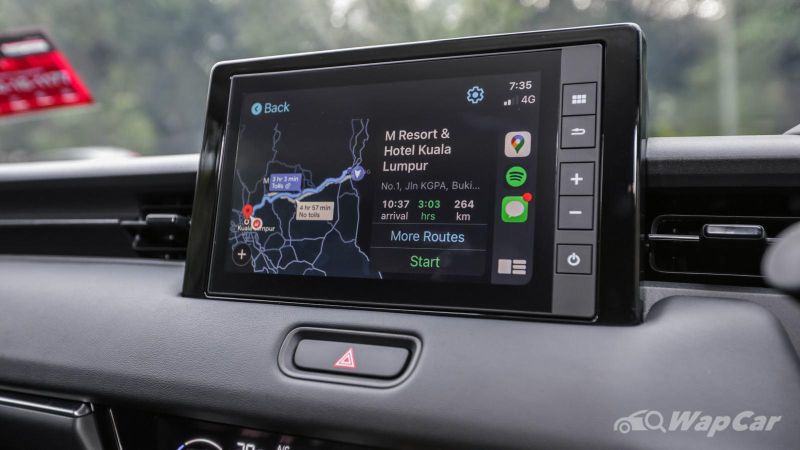 The biggest deal breaker for the Corolla Cross is not the car itself, but the locally-sourced infotainment head unit that’s so frustrating to use, especially its 360-degree camera that comes on every time you slow down and put on your indicators, thus overriding Waze / Google Maps. Unlike Honda’s LaneWatch, there’s no way to switch back to map view and you won’t be able to see the map until you speed up!

In contrast, the Honda HR-V e:HEV RS’ original Honda head unit works like a charm. Its 8-inch touchscreen is one inch smaller than Toyota’s but it doesn’t matter because its Android Auto / Apple CarPlay integration works so much better, with decent image resolution, and more importanty, doesn't lag.

The Honda also has 8 speakers versus the Toyota’s 6. 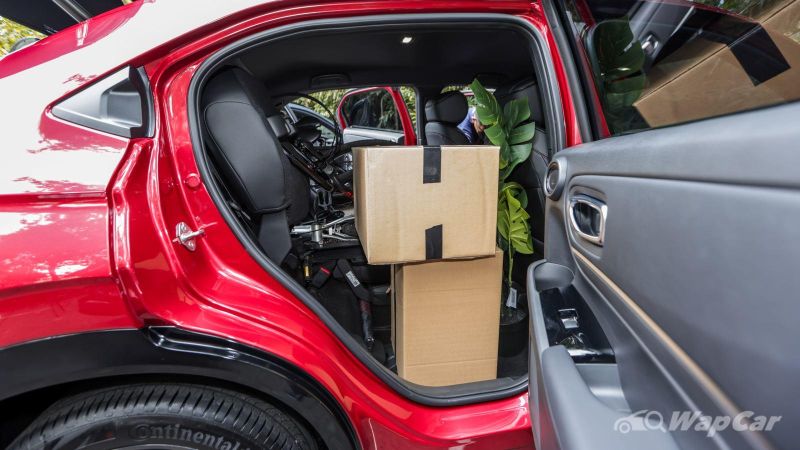 In terms of head and shoulder room, the Corolla Cross has a stronger advantage as it can sit 3 adults behind more comfortably.

But you’ll be surprised to know that it is the smaller Honda HR-V that fits more cargo inside.

Take the boot floor for example, the Corolla Cross’ rear seats don’t fold flat but the Honda HR-V does. Having a flat surface makes a world of difference in how usable the boot is.

The Honda also has a lower boot floor, so it’s easier to load and unload heavy items.

Of course, there’s also the magical Honda Ultra Seats, which allows the seats to not only fold down but also fold up, so you can transport not just long items, but also tall ones. Its an amazing feature that transforms a small B-segment SUV into something that matches a mini cargo van.

Both cars are not blisteringly quick and if we are honest, the HR-V e:HEV RS doesn’t drive like its 253 Nm suggests. Still, the HR-V is noticeably faster than the Corolla Cross Hybrid, which takes nearly 13 seconds to accelerate from 0-100 km/h!.

Since our driving session was shared with other media, we didn’t have a chance to do a timed acceleration test with our timing gear yet, but we reckon that the HR-V is a much faster 10 second car (we are referring to 0-100 km/h, not quarter mile).

Like the Civic and Accord, the HR-V’s Sensing driver assistance suite is more intuitive to use than Toyota’s, with better laid out user interface versus the Corolla Cross’ more cluttered instrument panel.

In the Honda, displays for Sensing-related functions are grouped together in the middle. 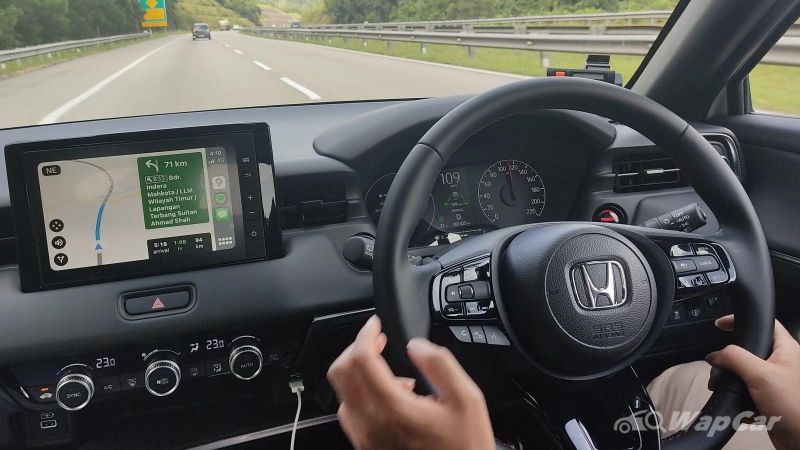 Sensing’s adaptive cruise control (ACC) also adds stop-go function (Honda calls it LSF, for Low Speed Follow), for a more relaxed drive when you’re caught in a slow crawl on the highway (not advisable to use ACC in the city, where motorcycles frequently cut in).

Toyota’s Dynamic Radar Cruise Control (DRCC) is also able to bring the car to a halt but since it uses a mechanically operated foot brake instead of an electric one, it is unable to resume the function after stopping. 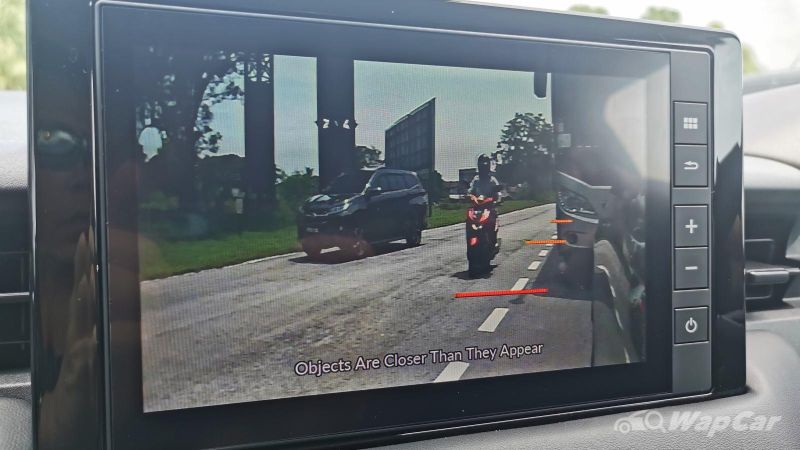 The Corolla Cross adds blind spot monitor, which the Honda doesn’t have, but its LaneWatch camera makes up for it by being more useful at night, in the rain. Also, blind spot is less of an issue on the driver’s side, hence why LaneWatch works on the left.

Before you assume that we are all in on the HR-V being the best car, this is the point where the Corolla Cross Hybrid makes a come back. Just like there’s no perfect wife / husband, there is no perfect car and the HR-V is no different.

While we love the HR-V's ultra-practical Ultra Seats, more powerful drivetrain, and the more expensive interior versus the Toyota, we don’t like the e:HEV RS variant’s black roof lining.

The black material makes the already low roof feel closer than it needs to be. Those with children may also find this to be a concern, as it makes toddlers fidgety.

The new HR-V’s dashboard also sits higher than before, likewise the infotainment, which is also closer to the driver for easier reach, but together with the black roof lining and smaller windows, it makes for a more claustrophobic experience.

Although the Corolla Cross’ has a similarly dark roof lining, its taller roof and larger windows gives it a more ‘airy’ feel in the cabin.

The upside for Honda is that the ‘regular’ non-hybrid turbocharged V variant comes with a lighter beige colour roof liner. 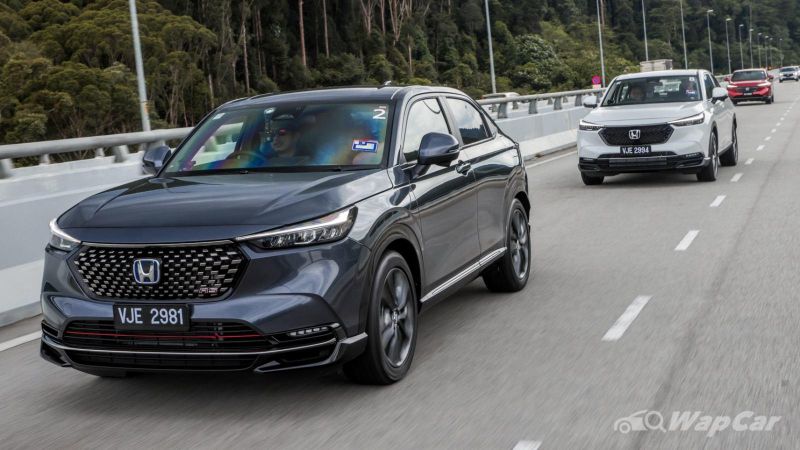 Like all Honda hybrids past and current, engine refinement is not its forte. The Corolla Cross Hybrid’s engine runs on the same Atkinson cycle principle as the HR-V e:HEV RS, but the Toyota is a lot quieter and smoother.

The Honda’s engine sends more vibration into the cabin and at certain speeds, you feel the vibration through the throttle pedal, which doesn’t make for a comfortable drive on long distances.

Although the Honda has a more powerful drive motor, its smaller 1.5-litre engine has to work harder to keep the battery juiced up when driving on long sustained highway speeds.

Overall, the Corolla Cross Hybrid is a more relaxed cruiser, with better seats than the Honda too. Despite its lower power output and lack of straight line speed, it is the Toyota that is the more comfortable long distance driving car,

In urban traffic, the HR-V e:HEV RS’ motor-first, engine-second concept works like a charm. At higher engine speeds however, the benefits of its hybrid drivetrain diminishes quickly, and it’s probably related to the smaller 1.5-litre engine which has to work harder than the Corolla Cross’ 1.8-litre. 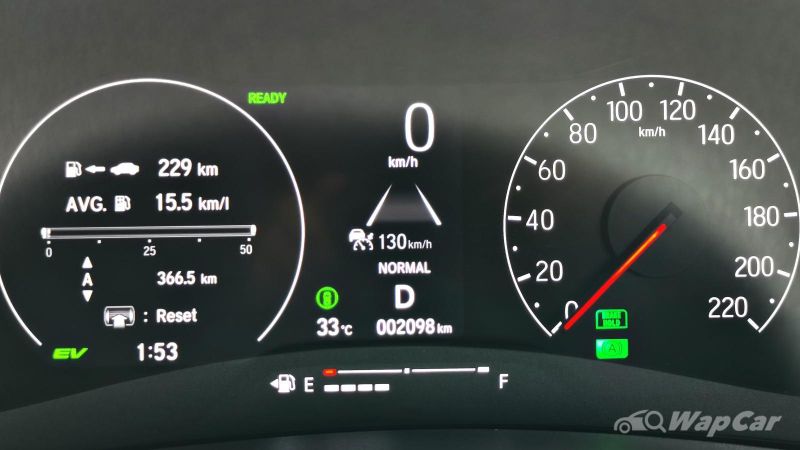 Over 230 km distance from Terengganu to KL, mostly highways, the HR-V Hybrid averaged 6.4-litre/100 km. The Corolla Cross on the other hand, crossed 370 km from Penang to Shah Alam with an average of 5.7-litre/100 km, both are trip computer readings.

Yes, the route is not identical, but the Corolla Cross’ more relaxed running engine suggests that it will be more economical regardless of the route.

As a drivetrain package, the 1.8-litre Corolla Cross Hybrid's package has a wider depth of capability to allow it to work better on a greater variety of driving conditions.

Cons: Warranty coverage not as comprehensive as Toyota’s

The Toyota Corolla Cross’s hybrid system is covered by an 8+2 years unlimited mileage warranty (2 years extension is optional, costs RM 2,950), and it covers not just the battery but also the inverter and power management control unit.

The Honda HR-V Hybrid’s 8-year unlimited mileage warranty only covers the high voltage battery. Other hybrid components are not covered.

On the upside, real-world experience suggests that Honda hybrids are more reliable than Toyota ones in local driving conditions.

Most independent hybrid specialists we speak to say Honda hybrids rarely need repairs, with longer lasting high voltage battery and ABS pump too (the latter a weak spot for Toyota hybrids). This is despite the fact that 10-year old IMA mild-hybrid models were sold in far greater numbers (3 models – Jazz, Insight, CR-Z) than the Toyota Prius and Prius c. 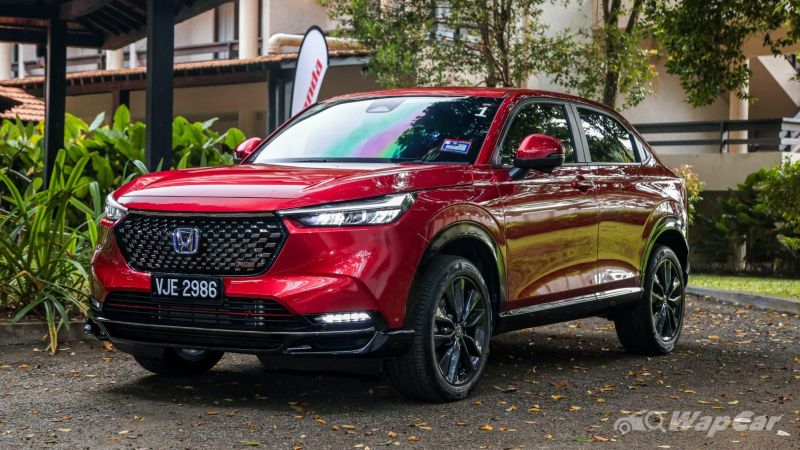 Both the Corolla Corolla Cross and HR-V e:HEV RS Hybrid are two of the best value for money SUVs you can buy today. They are future-proofed against the expected increase in fuel prices once subsidies for RON 95 is revised post-election, and both come with all the safety and convenience features you want.

Both have their strengths and weaknesses but if we have to choose one, our vote goes to the Honda. 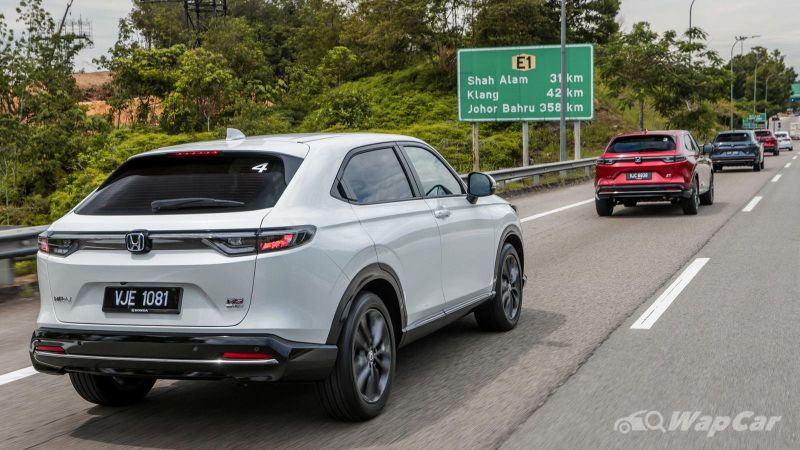 The Honda’s poorer refinement only becomes apparent at higher speeds and you don’t drive at 130 km/h for hours straight very often, but you use the navigation and turn signals every day. We just cannot live with the Corolla Cross’ infuriating 360-degree camera that insists on overriding Android Auto / Apple Car Play’s navigation every time you slow down and use the indicator.

If you are the sort who don’t know what Android Auto / Apple CarPlay is and still use an old school phone holder stuck to the windscreen, and you listen to FM radio instead of Spotify, then yes the Corolla Cross Hybrid is still a right fit for you.

Or if you intend to cover a lot of highway driving distance, then the Toyota Corolla Cross is the better car for you.