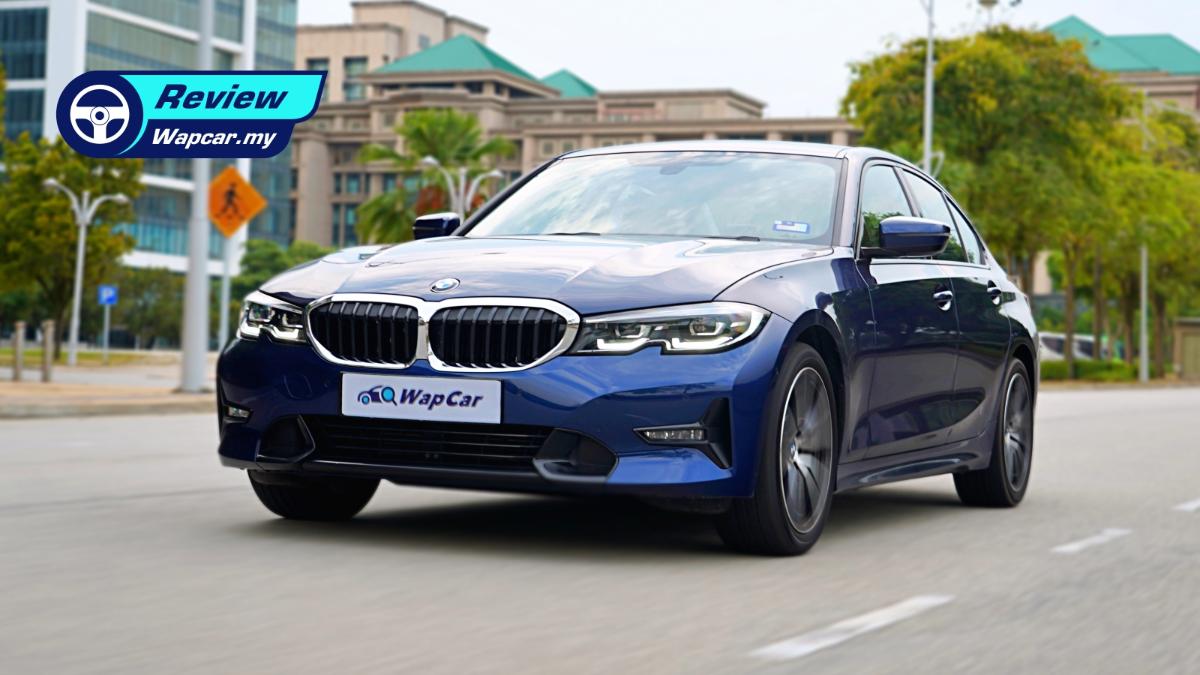 In a word association game, BMW would most likely be associated with 3 Series. It is quintessentially BMW. For many, the BMW 3 Series represents an entry to the brand or even to what we commonly refer as “Continental cars”. 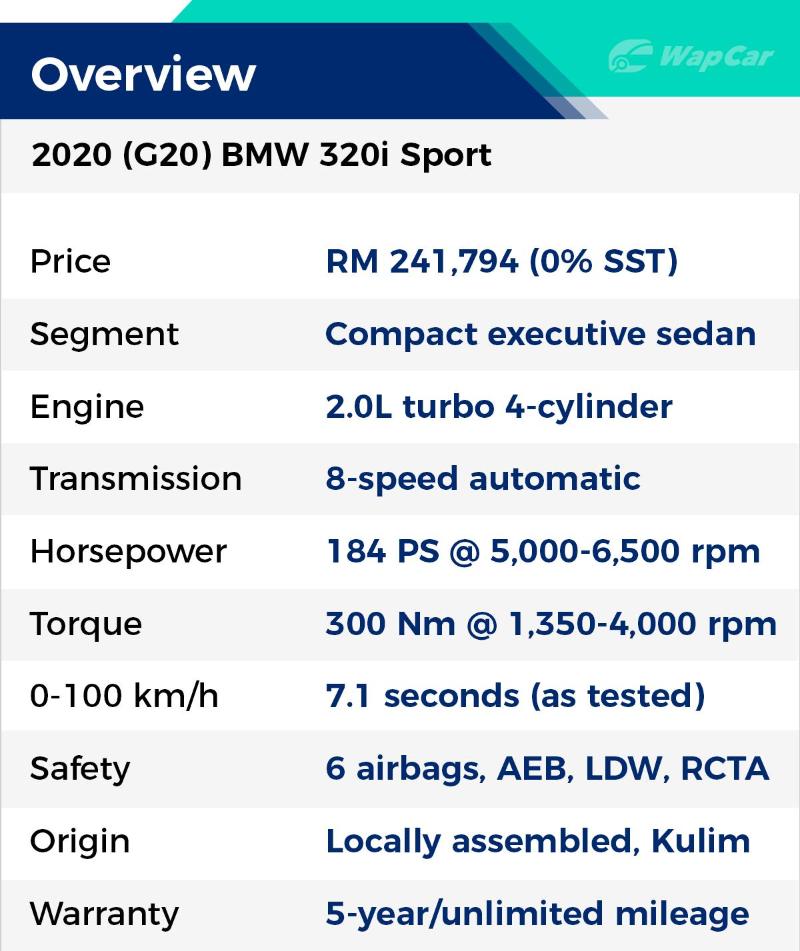 As BMW then, it is imperative to get the 3 Series recipe right. And in the aspect of driving, BMW has nailed it. But not without its downsides, and we shall get into those in a bit. 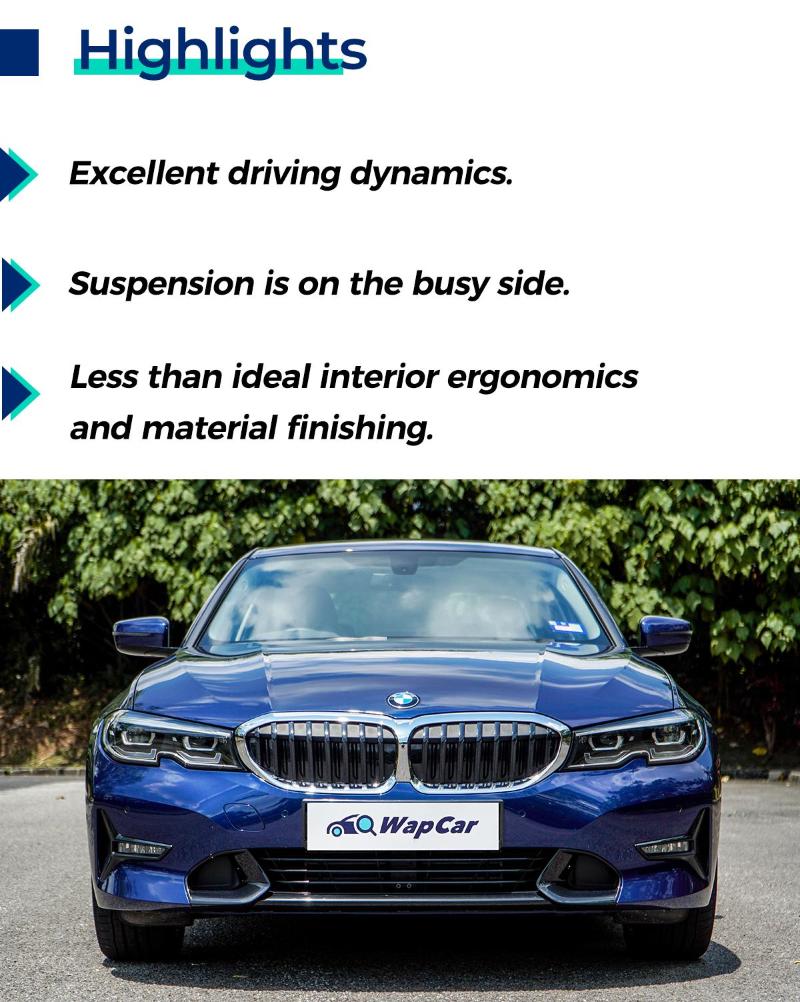 Exterior - Not missing out without the M Sport kit 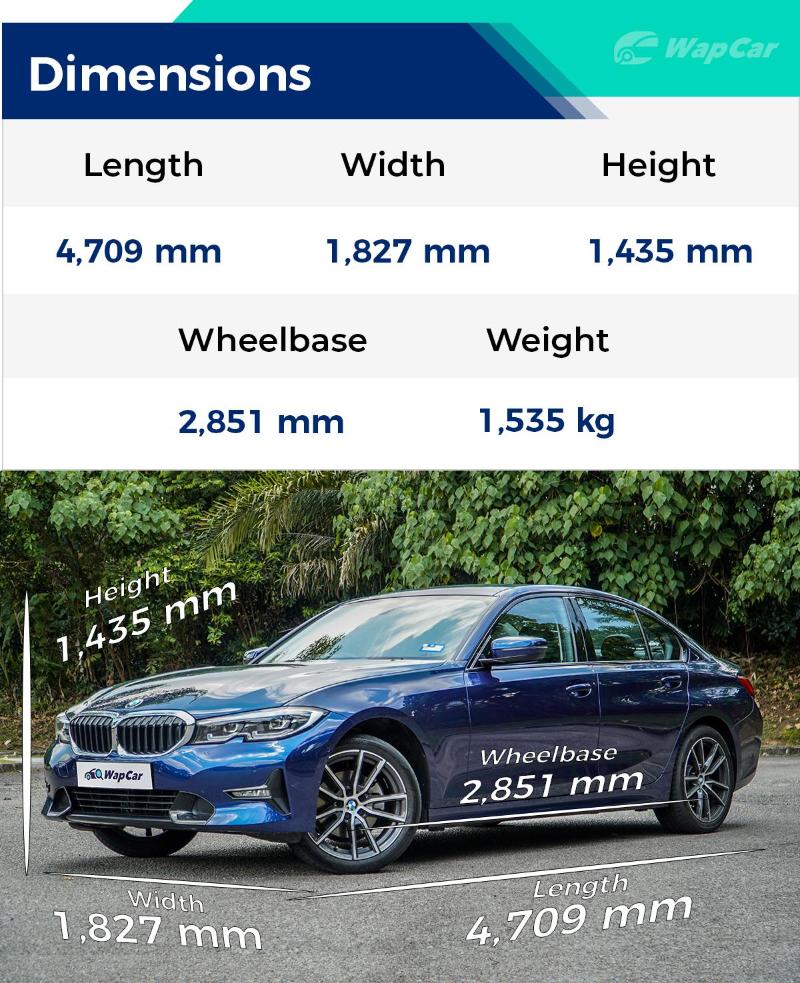 From the front, the headlamps feature a notch which is said to hark back to the E46 3 Series. Although some have likened it to the Peugeot 3008. Compared to the previous F30 generation, the front grille is moderately enlarged which is still accepted by most, unlike the controversial 4 Series and upcoming M3/M4. 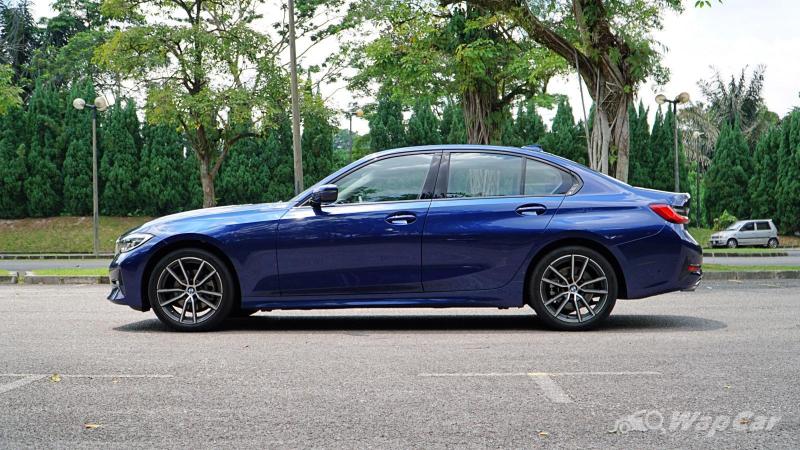 The 320i Sport wears 5-twin-spoke 18-inch alloys, which I think looks better than the ones in the 330i M Sport. Traditionalists may not appreciate that the Hofmeister kink now looks more like an arrow than a curve, but I’m indifferent to it. There are also more creases running along the side of the car. 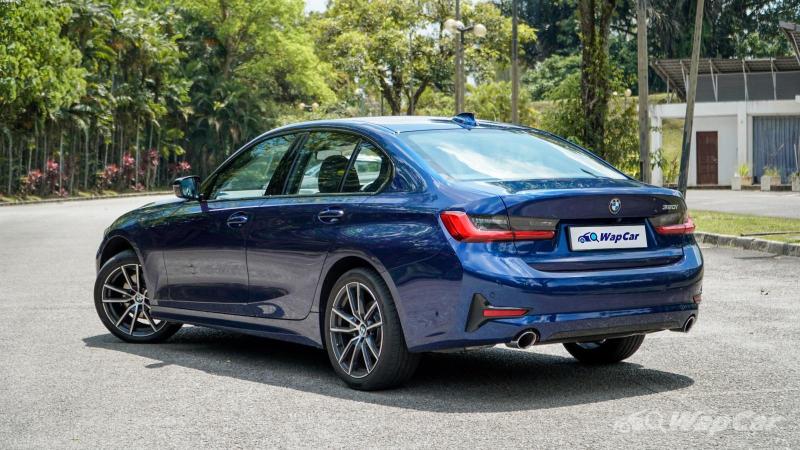 Over to the rear, I like the darkened area of the taillamps, which highlights the “L” motif. And there’s twin exhaust tips. Real ones. Take that Mercedes-Benz and Audi. 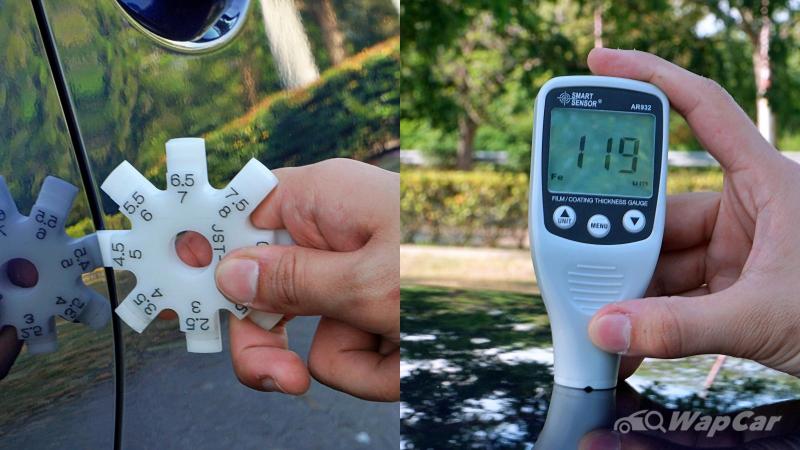 Panel gaps deviated by no more than 0.5 mm from the opposite side. Paint thickness averaged in the 110s of micrometres with no outliers. 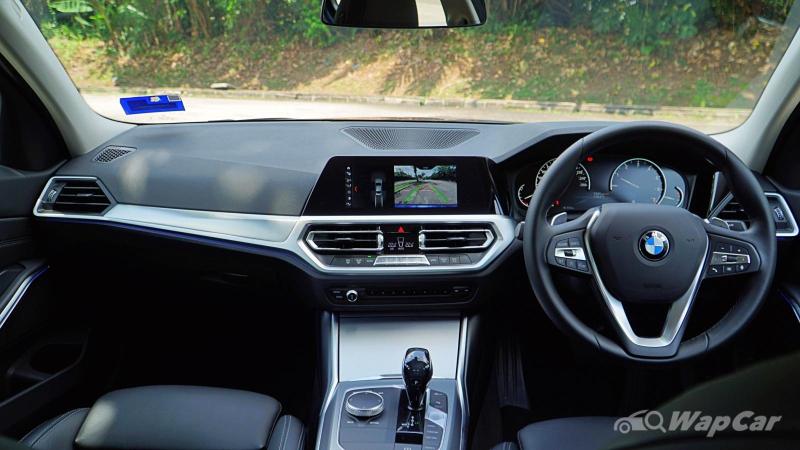 Let’s start with the positives, it’s an improvement over the F30’s interior in terms of design. It’s more modern with ambient lighting, digital-looking analogue instrument cluster, and a neater center console. 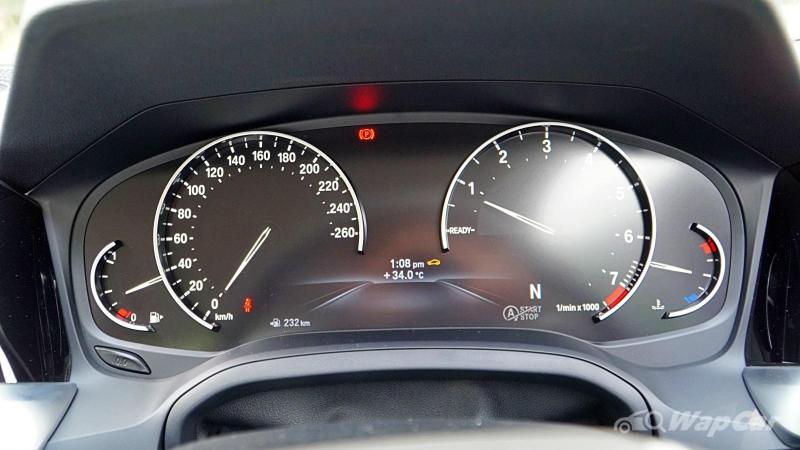 Steering wheel is chunky and the leather feels supple. Those who prefer to sit low will appreciate its driving position. The iDrive system which runs on Operating System 6 is as intuitive to use as ever. Space in the rear is generous for a car of this size. 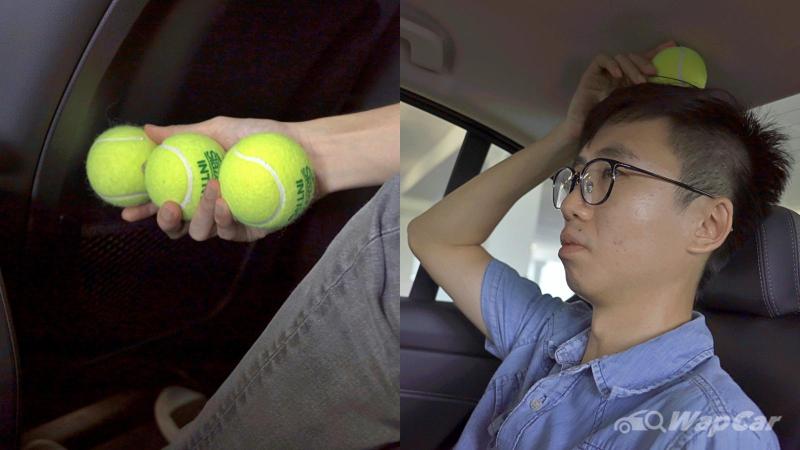 Another improvement over the F30 is the option to sync the climate control, a crucial feature for individuals with OCD like yours truly. Also, the rubberized part behind the door grab handles are no more, so sticky rubbers are a thing of the past. 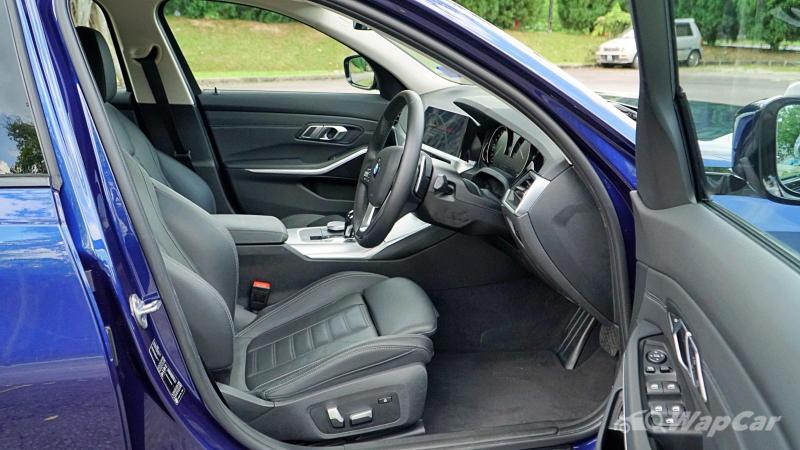 Moving on to less than satisfactory aspects, the driver’s footwell is rather tight and the pedals are noticeably offset to the right. The latter is typical of right-hand drive BMWs, but it’s even more pronounced in the G20. As a result, there’s practically no wiggle room for my right foot when placed on the accelerator pedal. 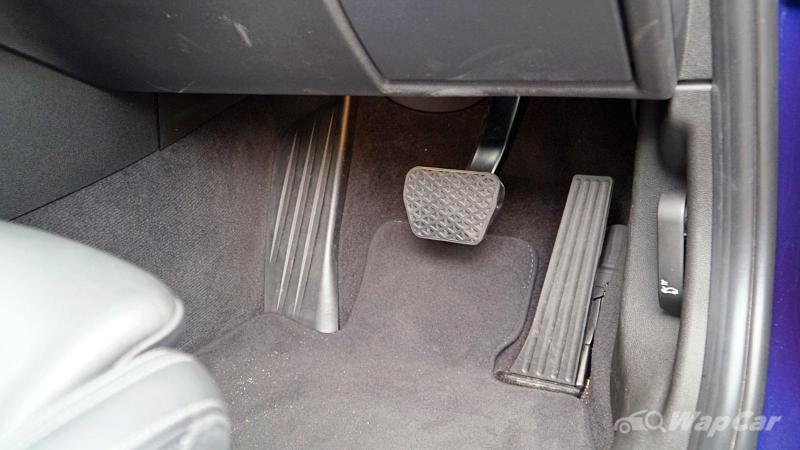 Materials used in the cabin feel, to put it politely, less expensive. The door grab handles/pockets feel hollow, the knobs on the side air vents feel plasticky, lower door plastics aren’t soft as in the F30, and the lid on the centre console has sharp edges. Speaking of the centre console lid, it actually reflects sunlight, glaring the driver. 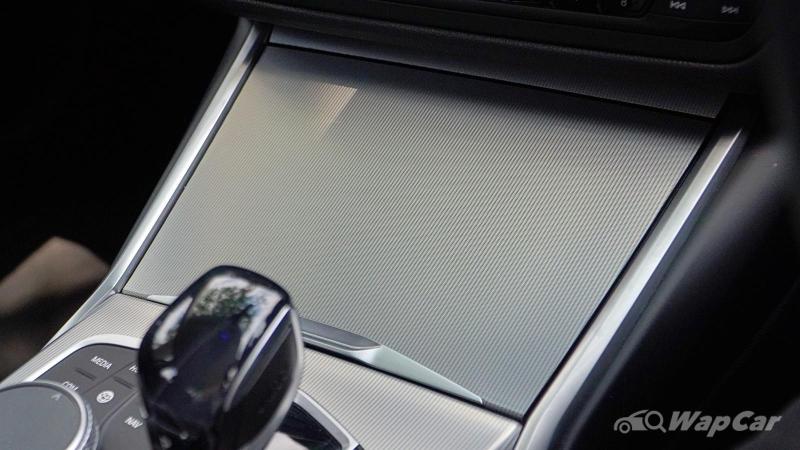 Another ergonomic complaint is the position of the “P” button on the gear selector. It’s placed at the middle of the lever, where no fingers are naturally placed in that position. 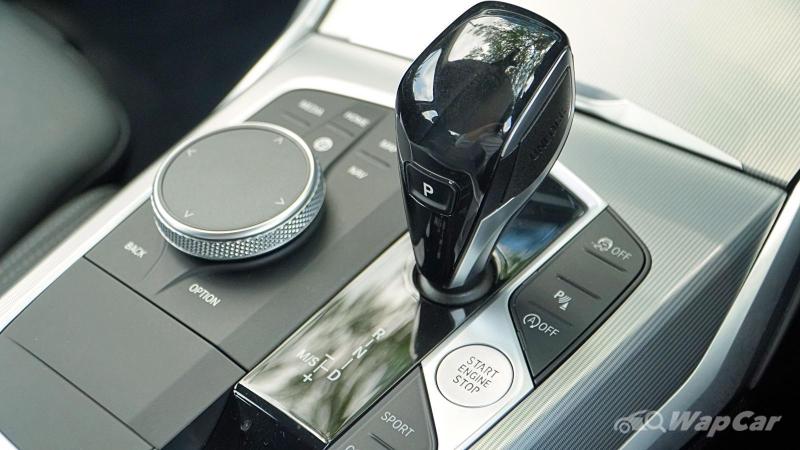 Perhaps expectations were a little high, but when a Mazda 3’s interior feels more premium than a BMW 3 Series, you’d start to question – what am I paying all that extra cash for? The answer is in the drive. 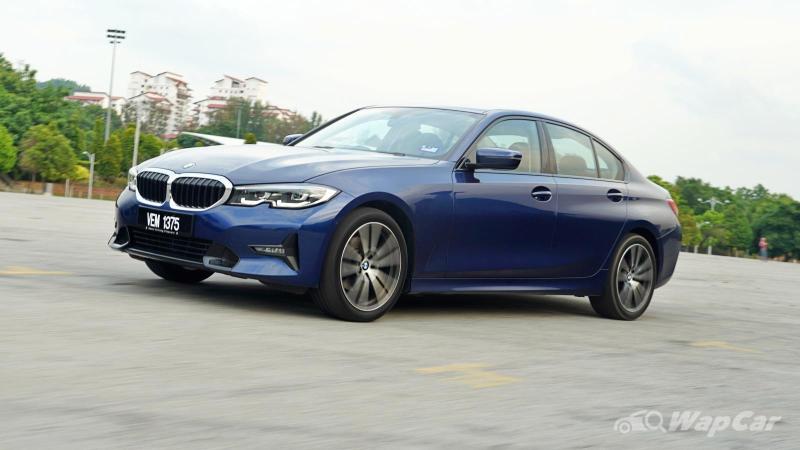 In the previous generation (F30), some have accused it of being too soft and its electric power steering lacks the feedback present in the E90 generation 3 Series. So, BMW has gone to town with the G20 in the driving department.

The G20’s steering isn’t riddled with feedback, but it is almost telepathically precise. What’s more, the relationship between the body, suspension and steering is harmoniously synced. It feels light on its feet and wonderfully balanced in corners, with no inclination to understeer or oversteer unless provoked. 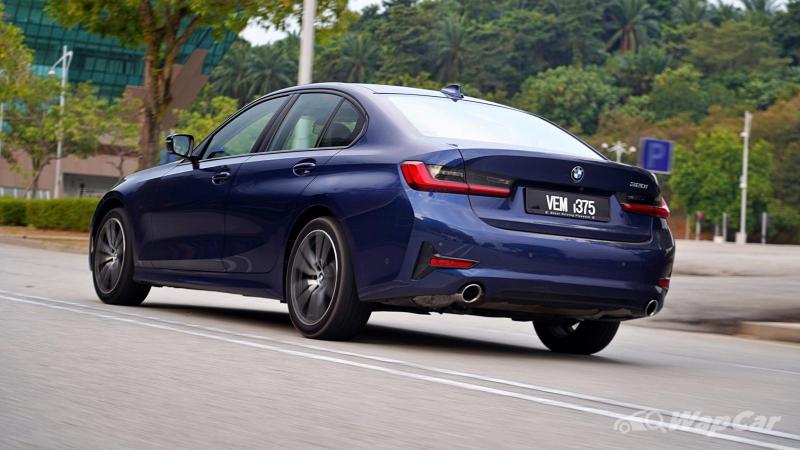 Then we have the powertrain, the B48 2.0-litre turbocharged 4-cylinder engine mated to the ZF 8-speed automatic. Getting up to speed is, for the lack of a better word, effortless. The engine does run out of breath above 5,000 rpm though, so it’s best to stay within the “meat” of the range between 2,000 – 5,000 rpm. 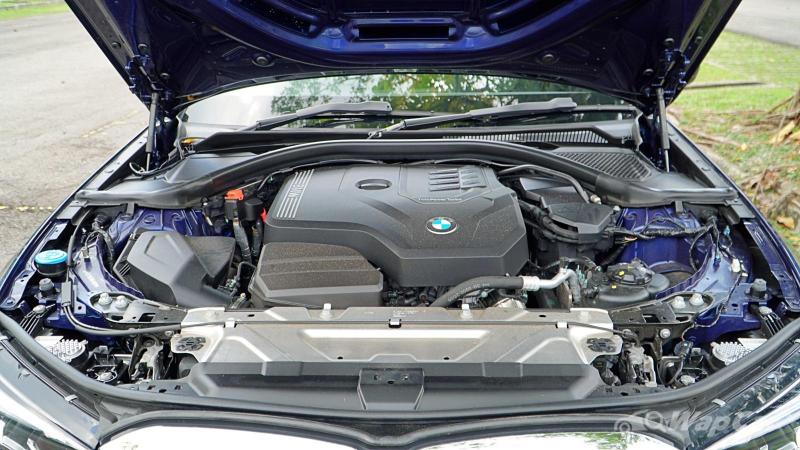 The transmission is, dare I say it, the best in the business. It’s incisive, snappy, and smooth. It’s always in the right gear at the right time and shifts imperceptibly when cruising.

On the subject of cruising, a more impressive feat would be the G20’s highway cruising capability. High speed stability is excellent, with the torque from the engine effortlessly keeping up the pace. 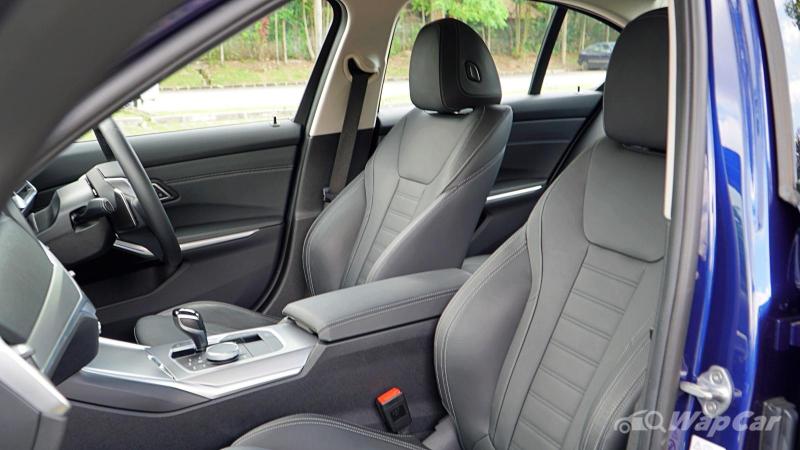 All that driving prowess does come at a price – ride comfort. It’s firmer than in the previous F30 generation 3 Series but don’t get me wrong, it isn’t punishingly stiff. In terms of comfort, it's actually no worse than the Mercedes-Benz C200.

Over less than ideal surfaces, you do feel the unevenness albeit in a good way as it’s rarely harsh. It feels like the tyres are always in contact with the ground and doesn’t skip through any undulations. 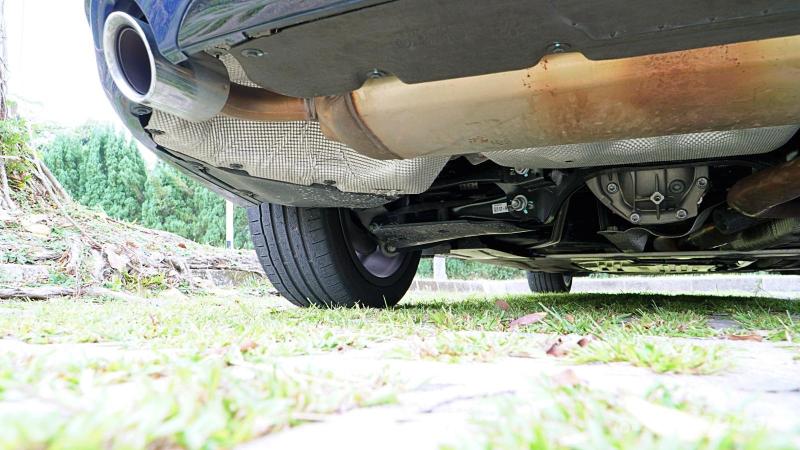 The 320i does ride better than the 330i M Sport, but the inherent firmness remains. The run-flat tyres do play a part in this, but an F30 on equivalent run-flats will still have a suppler ride. 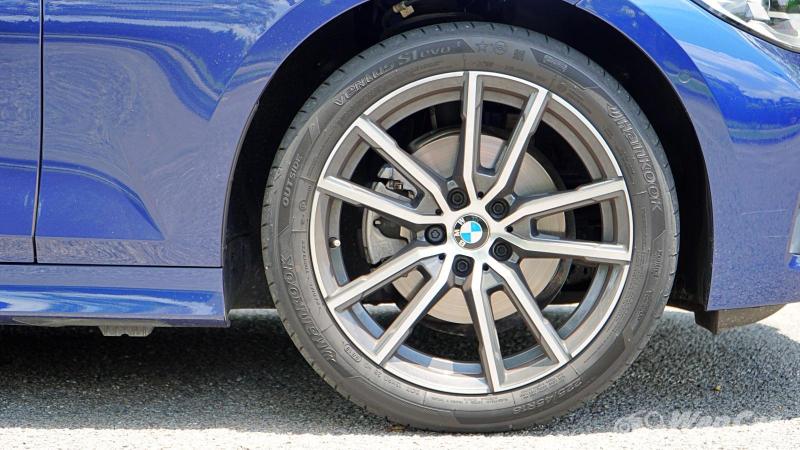 The seats are firm as well, both front and rear. In typical BMW fashion, there’s a cushion extension for additional thigh support for the front seats. Side support is adjustable but lumbar adjustment is absent. Despite the firmness, the rear seat is nicely sculptured for a comfortable sitting position and the bench provides good thigh support. 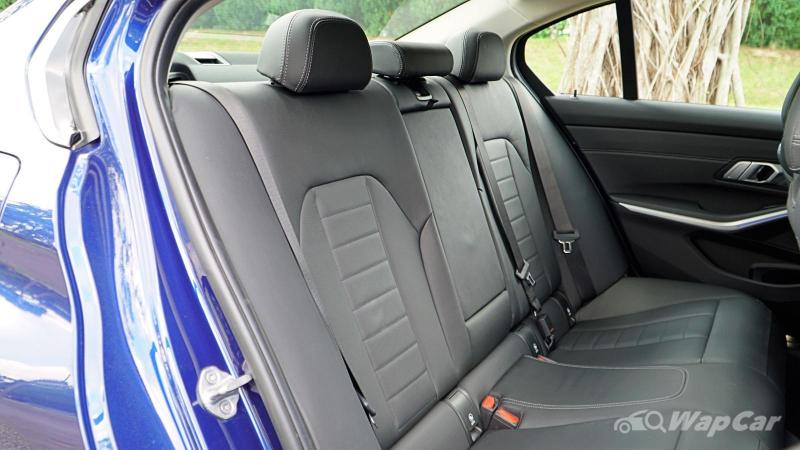 Noise level is an area much improved over the F30 generation. Road or tyre noise is noticeably lower than before and wind noise is well suppressed, thanks to the use of acoustic glass. At 110 km/h, the sound level meter recorded an average of 67 dB.

Fuel Consumption - Not as low as claimed, but impressive nonetheless 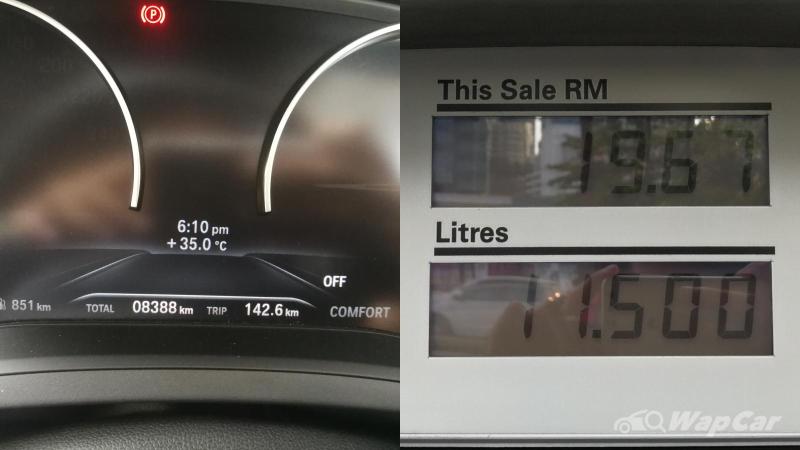 After a 142 km journey broken down to 60% highway, 40% city driving, the amount of fuel required to brim the tank was 11.5 litres. This gives a calculated fuel consumption figure of 8-litre/100 km.

Conclusion - Buy it if you put driving dynamics above all else 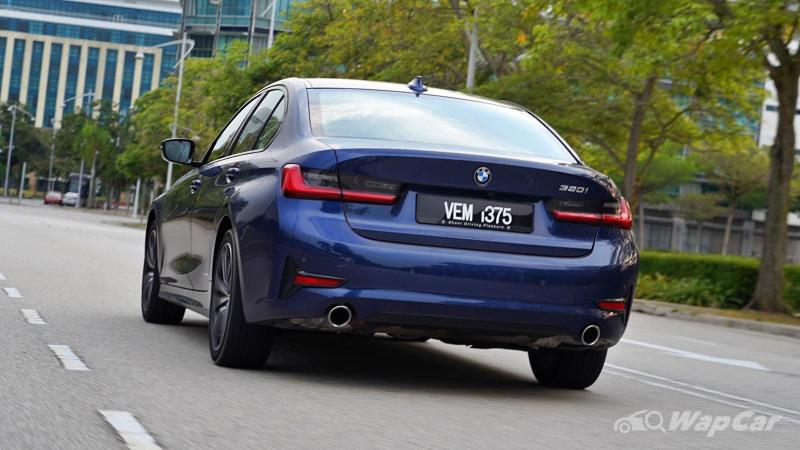 The G20 BMW 320i lives up to every word of the slogan “Sheer Driving Pleasure”. With the chassis and powertrain coming together, the BMW 320i is the best driving family car in its price range. 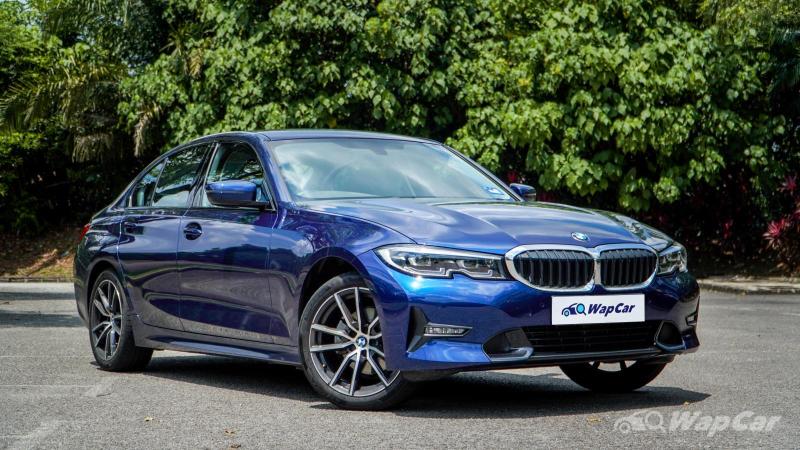 Compared to the Mercedes-Benz C200 in terms of ride and handling, it’s neither here nor there. Ride quality is similarly fidgety over poor surfaces and yet it’s not as confidence inspiring as the 3 Series through the corners.

But the C200 still has the better interior despite its age. It has a larger infotainment screen, a digital instrument cluster, materials used feel a more pleasant to the touch. Plus, the updated engine with 204 PS feels a little more muscular than the 320i. 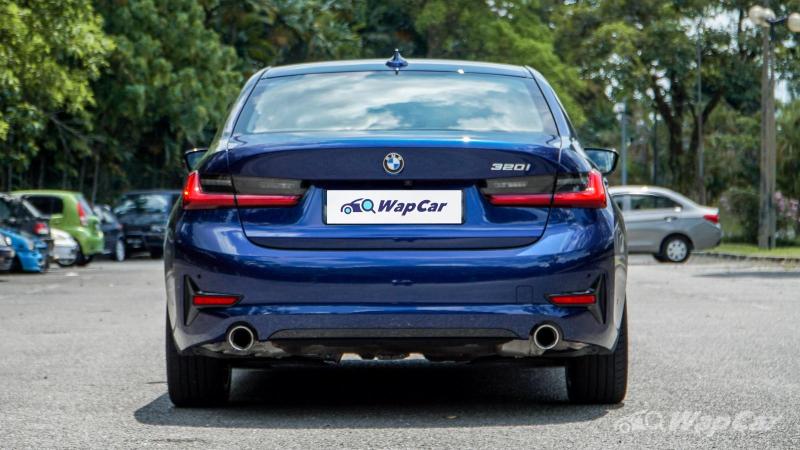 Choosing between these two will depend on how much you love driving. If you couldn’t care less about driving dynamics and just want a classier look inside and out, then the Mercedes-Benz C200 fits your bill.

The BMW 320i is for those who love driving and are willing to accept the less than satisfactory interior, not the mention the compromise in ride comfort. Among those would be yours truly.