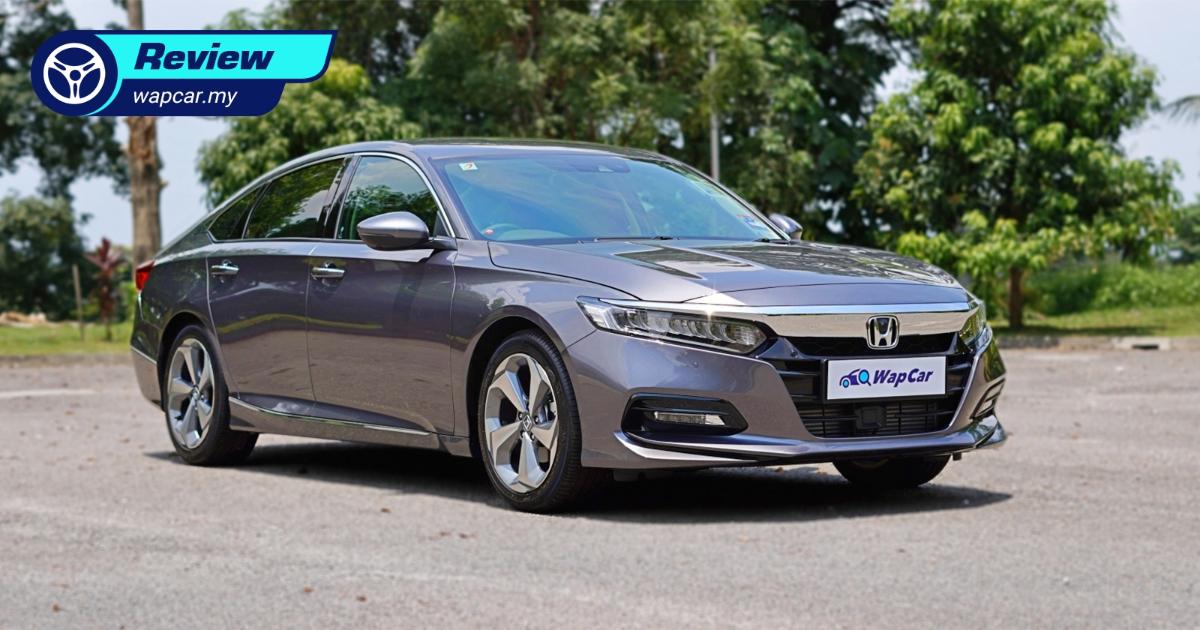 Then we have BMW who introduced the 218i Gran Coupe, priced at RM 211k. And that's not forgetting the SUVs that are competing for your attention. Putting those aside, is the 2020 Honda Accord 1.5 TC-P good enough for you to pick it over its main rivals? Let's dig in.

There are only 2 variants of the Honda Accord available – 1.5 TC and 1.5 TC-P. The variant we have here is the range-topper with the full suite Honda Sensing and LaneWatch. 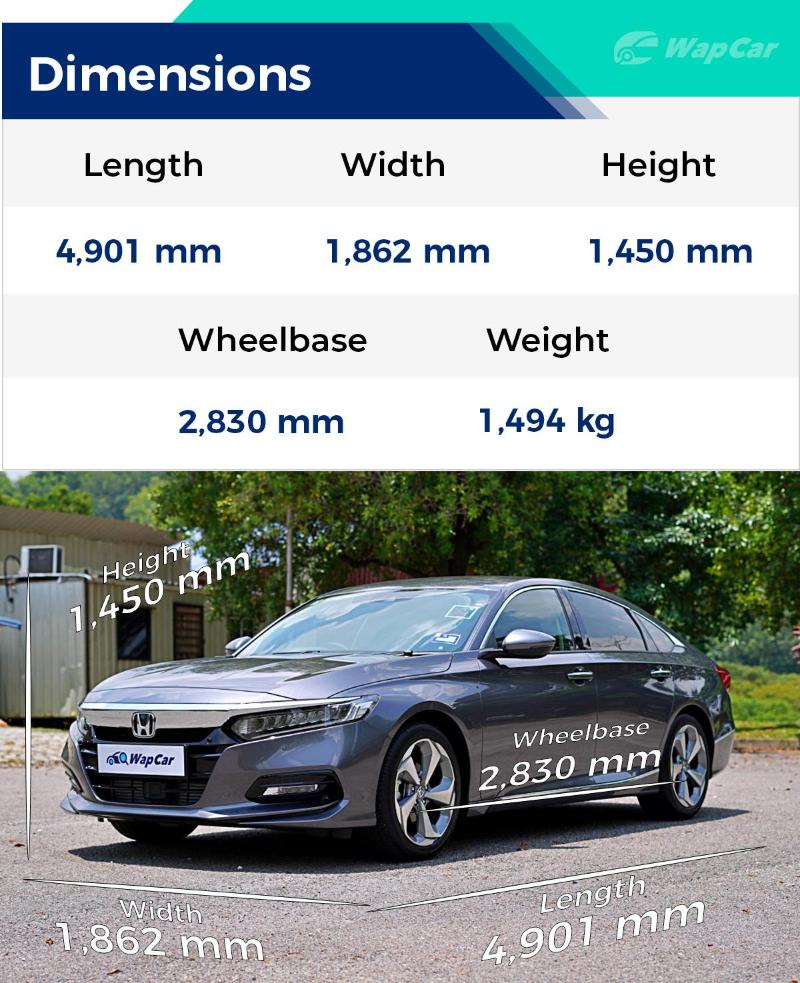 The 2020 Honda Accord no longer adopts the traditional 3-box design like its predecessors. Instead, it's a sleeker, almost fastback profile as seen in the Honda Civic.  From the outside, this is what I'd imagine the Honda Civic grows up to be. 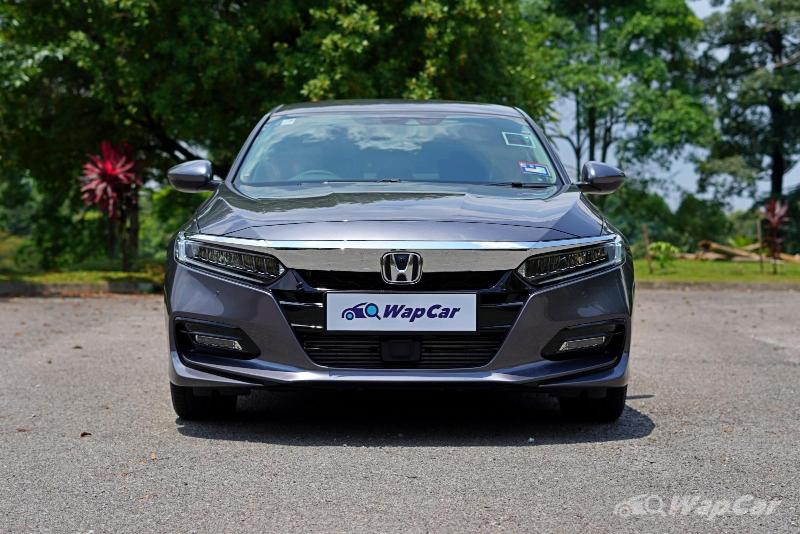 There are similar design elements such as the aforementioned fastback profile of Honda Accord, the chrome strip above the window line, the C-shaped taillamps albeit elongated, and slim LED headlamps that has a chrome trim that runs the entire width of the car. 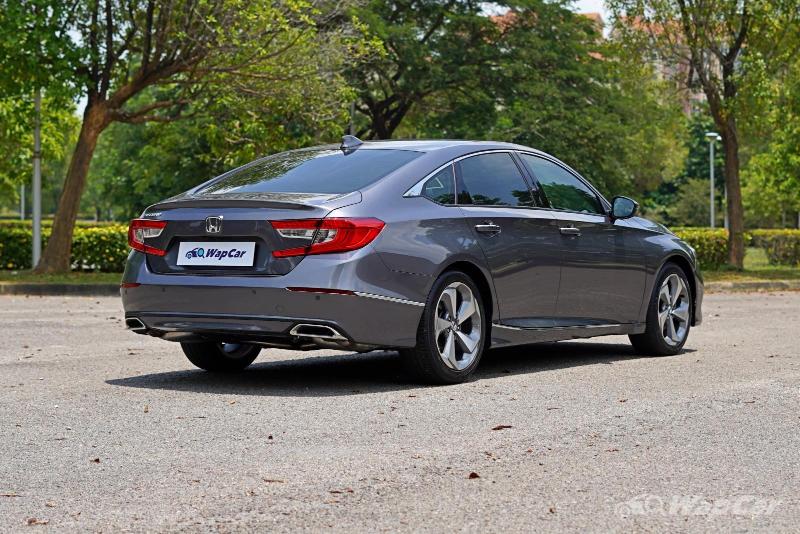 Admittedly, when I first saw the Honda Accord in pictures during its debut, I wasn't particularly fond of the rear end. Yes, it's the taillamps. After seeing it in the flesh and spending some time with it, it still hasn't grown on me sadly. Then again, it's only a matter of preference. 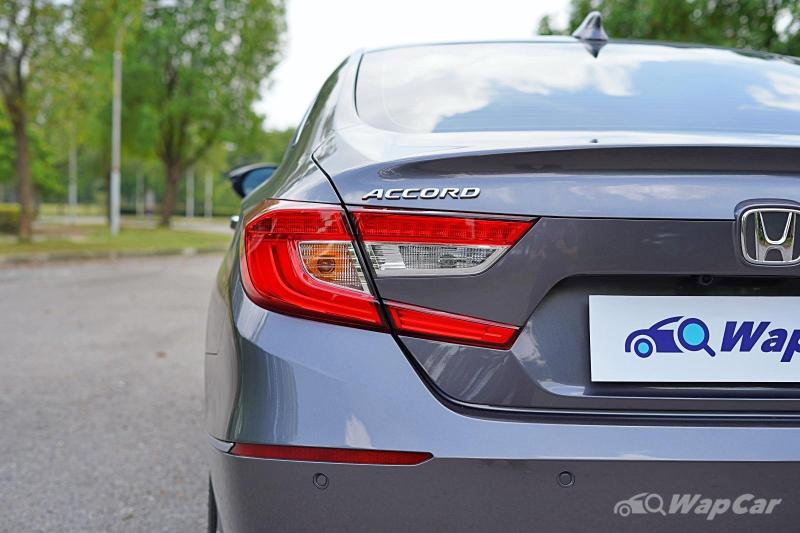 Wheels are 18-inch in size wrapped with 235/45 section tyres. Coincidentally, it's the same exact tyre size as the Toyota Camry and the Volkswagen Passat Elegance. 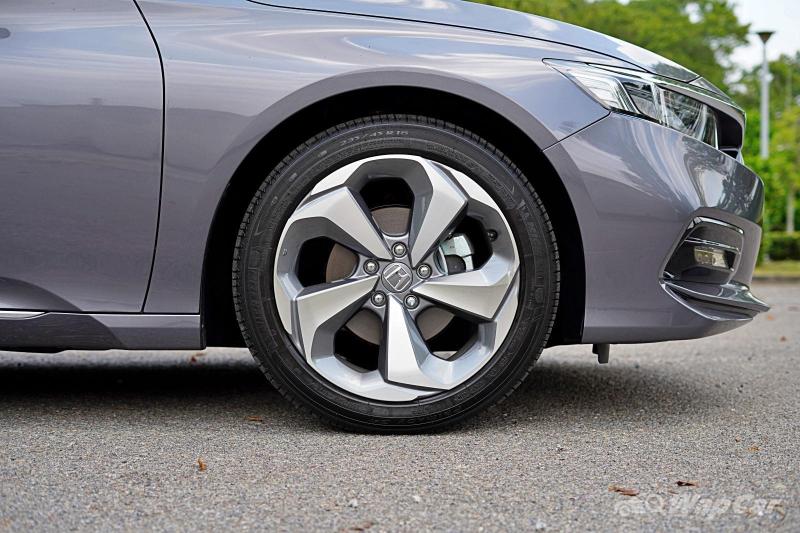 Panel gaps deviated by no more than 1.0 mm from the opposite side, indicating an average in build quality. Paint thickness hovered in the 110s of µm. 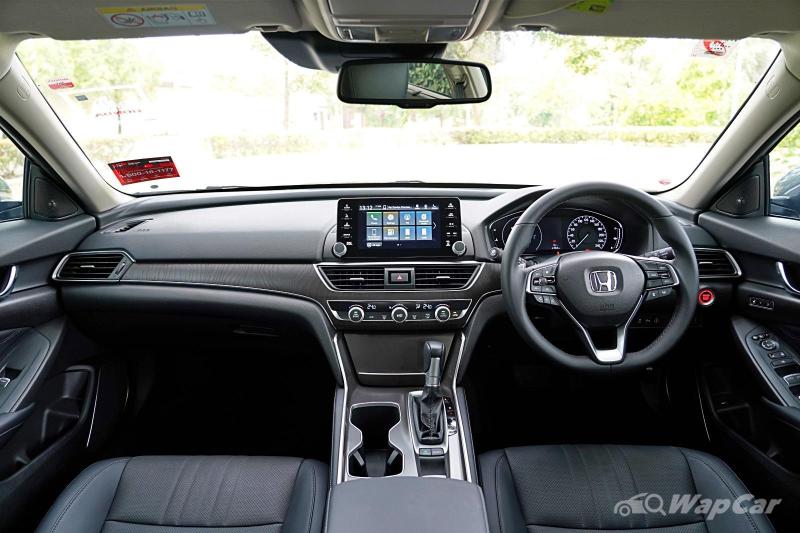 Like in the Honda Civic, Honda Accord's seats are mounted relatively low. Those who prefer a low driving position will appreciate this, myself included. But for those who don't, there's plenty of adjustment on the steering and seat for individuals of all sizes to get comfortable. 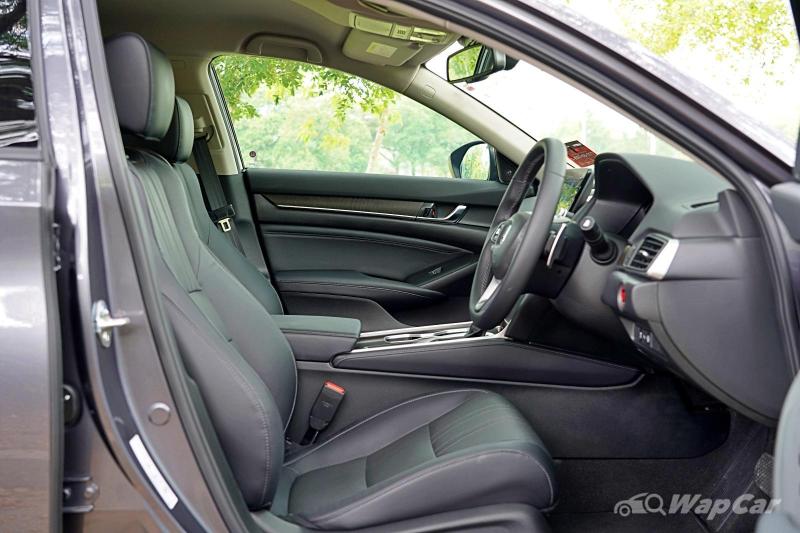 The dashboard itself is rather pleasant to look at. Nothing mind-blowing, just a well-executed, symmetrical design. There's minimal clutter, the infotainment screen is leveled with the digital instrument cluster and the buttons are exactly where you'd expect them to be. 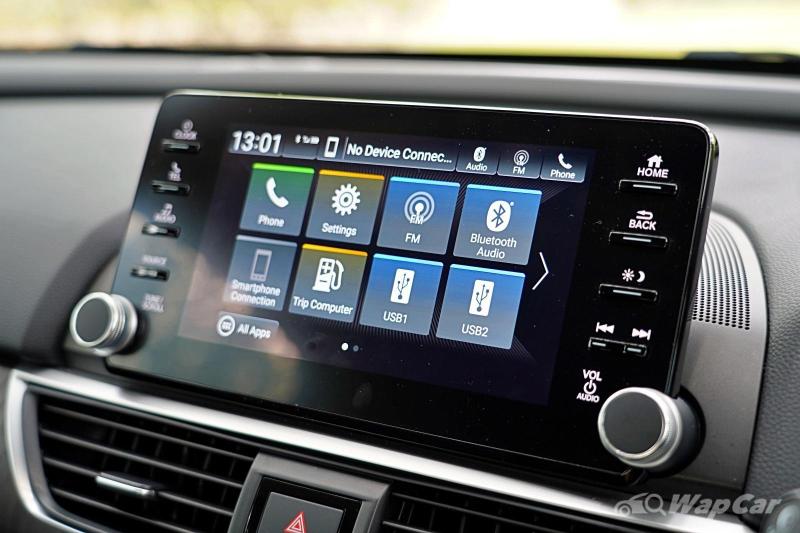 The non-branded 10-speaker system is surprisingly impressive. It sounds leaner than the bass-heavy JBL system in the Toyota Camry and it's overall more balanced across the frequencies. Some may prefer the rich-sounding JBL system, but I'm more inclined towards the Accord's audio system.

Apple CarPlay/Android Auto integration of Honda Accord 2020 is one of the best out there. Map directions (Android Auto only) are displayed on the LCD portion of the instrument cluster. 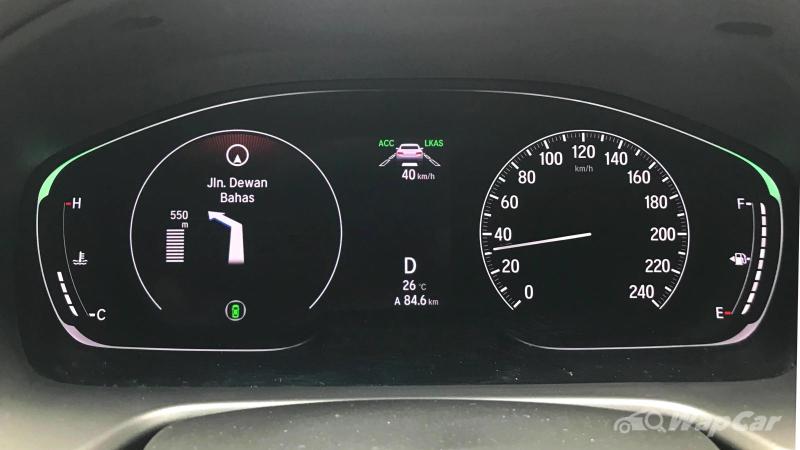 As with all modern Hondas, space and practicality are its forte. Spacious may be an understatement when describing the Honda Accord. When seated at the rear, the amount of legroom is unrivalled. If you want more legroom in a sedan, you'd have to spend triple the money for long wheelbase luxury sedans. 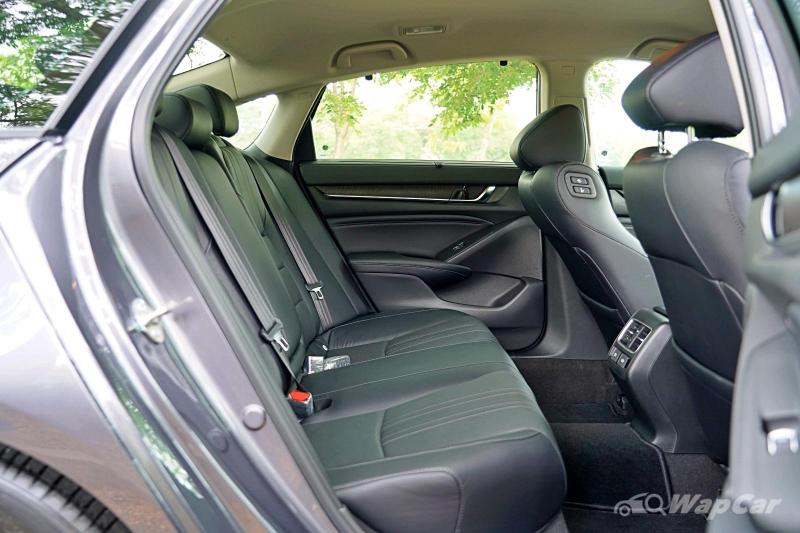 Build and material quality are par for the course. In the D-segment range, the Mazda 6's interior is still a cut above with its selection of materials and overall ambiance. 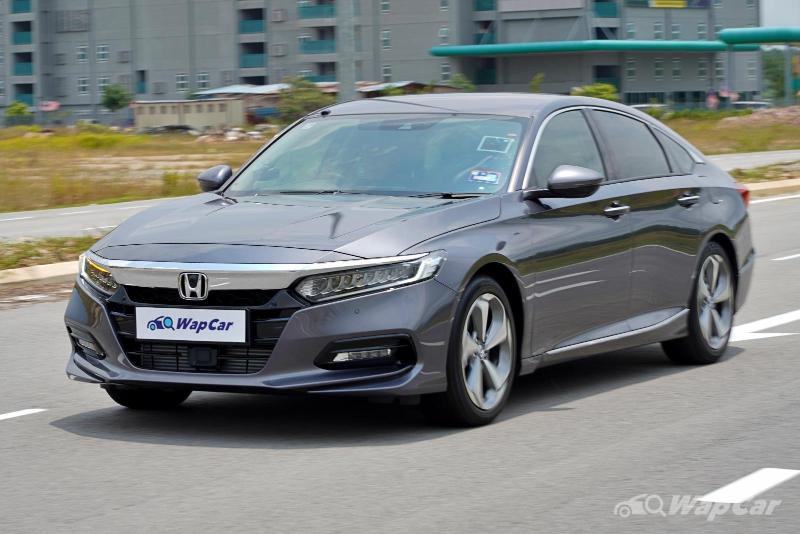 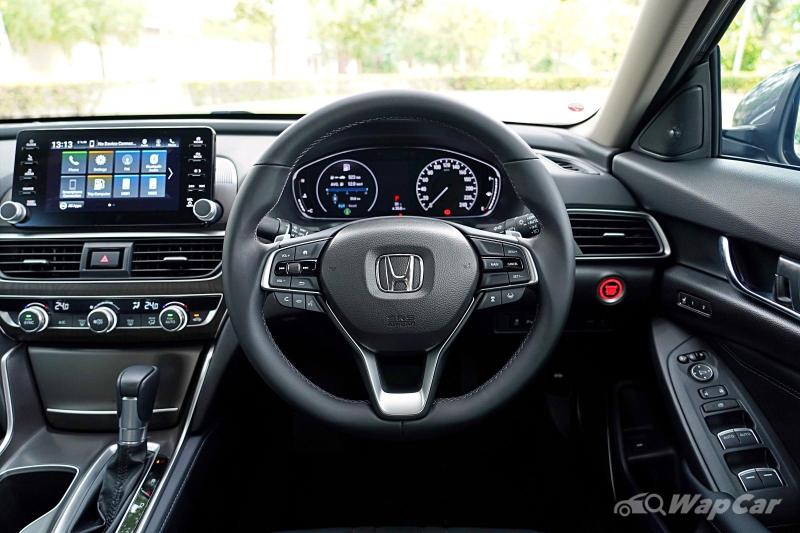 Don't get me wrong, the Honda Accord isn't terrible to drive. Far from it actually. But its inherent character is such that it wants to cruise rather than carve corners.

Steering is light, throttle response is gradual, and the CVT pulls the car along in such a smooth manner. It's a relaxing driving experience that doesn't encourage spirited driving. And if you do tackle corners in an enthusiastic manner, it will oblige with well-contained body roll and predictable handling balance. 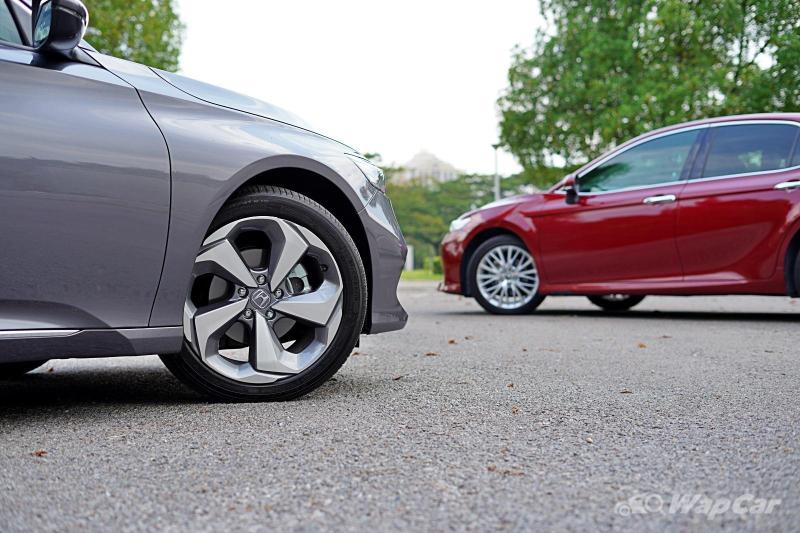 For comparison's sake, the Camry has a weightier steering that feels more natural and the weight transfer through corners is more apparent. And the naturally aspirated engine gives an encouraging growl as it goes up the rev range. All these translates to a more connected driving experience than the Honda Accord. 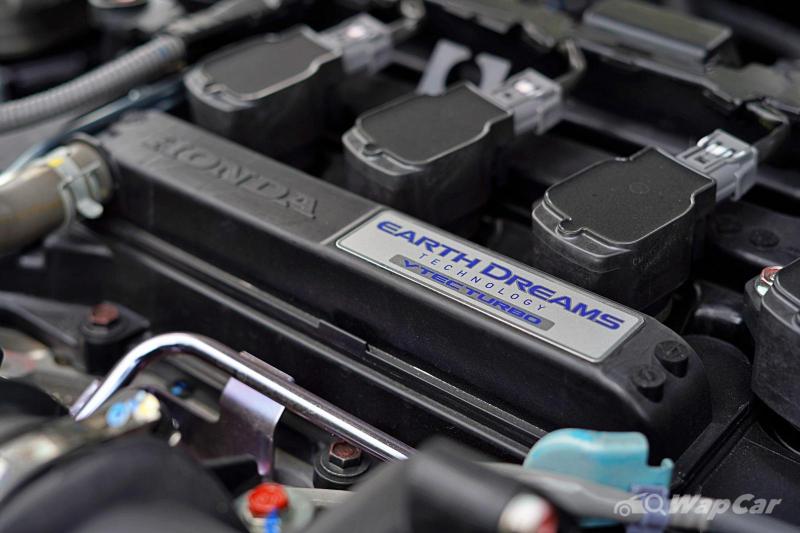 The Camry can't compete with the Accord's outright pace. 0-100 km/h is completed in 8.7 seconds, nearly 2 seconds quicker than the Camry. Having said that, don't expect the neck-snapping kind of acceleration in the Accord. It's a smooth and constant pull that matches its cruiser behaviour.

The Honda Sensing suite of ADAS works quite well on our roads. It's not intrusive and operates smoothly. Plus, it's the only one in its segment with Low Speed Follow that helps drivers creep along in traffic. 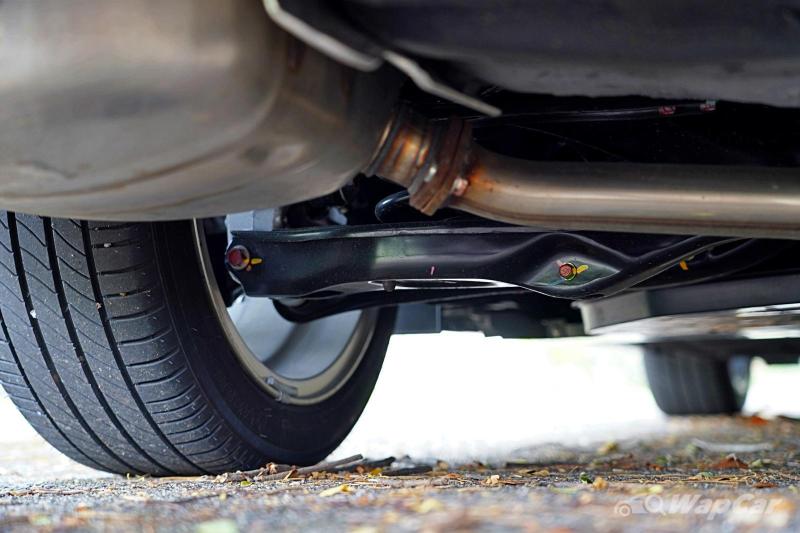 The suspension strikes a fine balance between pliancy and firmness. The same can be said about the Volkswagen Passat, but the Accord does it in a Japanese way without the nuggety feeling ride.

Damping is ever so slightly on the firmer side when compared to the Camry, but it still manages to soak up the worst of our roads without much disruption to the cabin. It's just a well-tuned suspension overall. 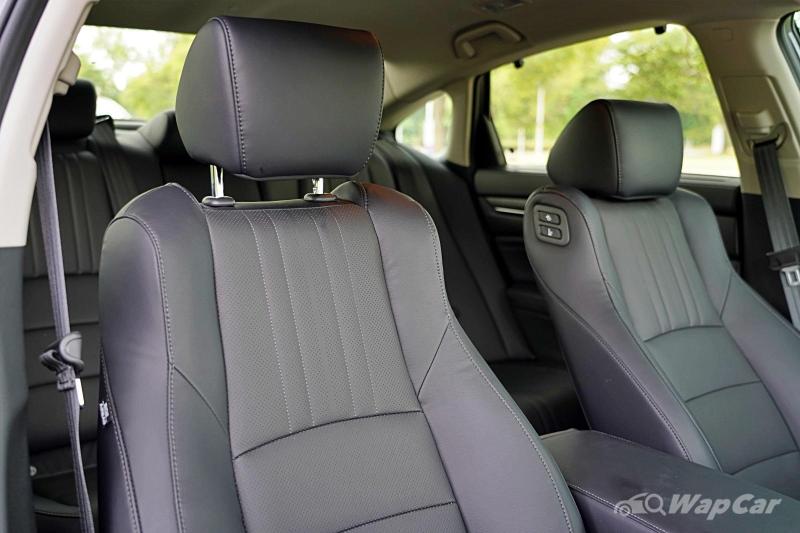 Front seats are not quite as plush as in the Camry, the cushions are just a tad firmer. Some may find the lumbar support to be overly aggresive and because the seats are mounted low, thigh support can be lacking as well.

The rear seats are where the Accord truly shines. Space aside, it's nicely sculptured and offers great thigh support from the seat base with proper length. 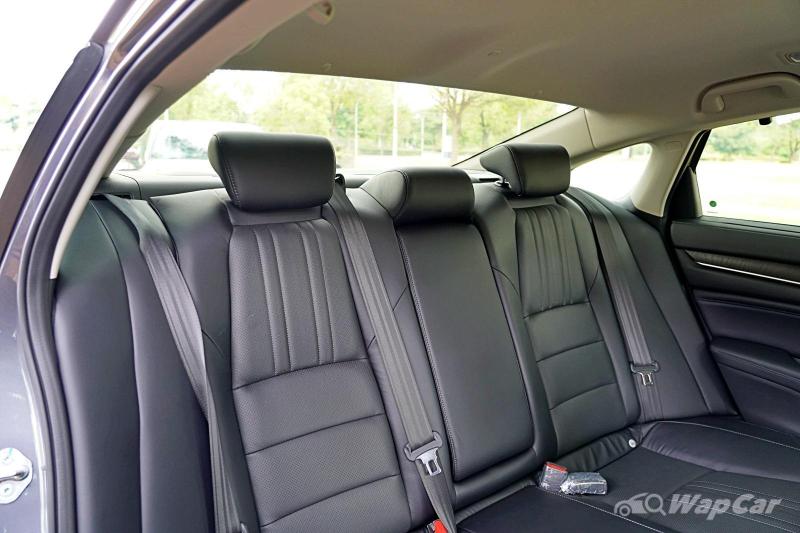 Cabin noise is where it gets baffling. Objectively, the sound level meter recorded an average of 69 dB at 110 km/h, which is 2 dB higher compared to the Toyota Camry. But subjectively, the Honda Accord felt quieter than the number suggests.

This could only point to the Active Noise Cancellation doing its thing by cancelling out frequencies our ears are sensitive to, thus making the cabin feel quieter. 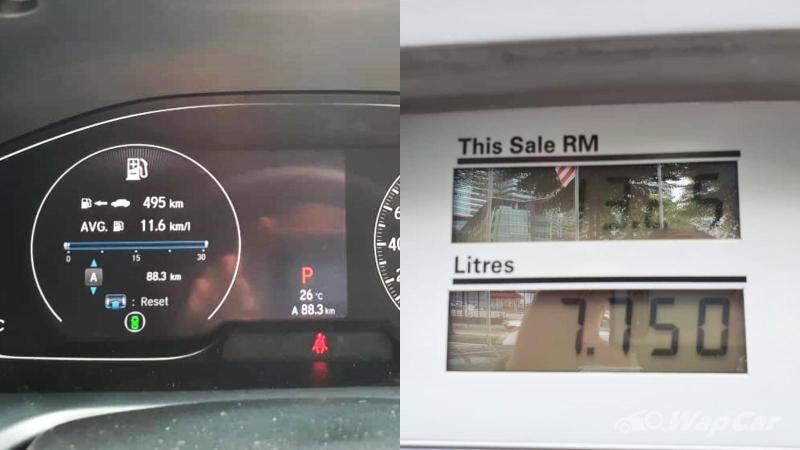 After a journey of 88.3 km broken down to 60/40 highway and city driving, the amount of fuel required to brim the tank once again is 7.75 litres. This means that 2020 Honda Accord's fuel consumption figure is 8.8-litre/100km. 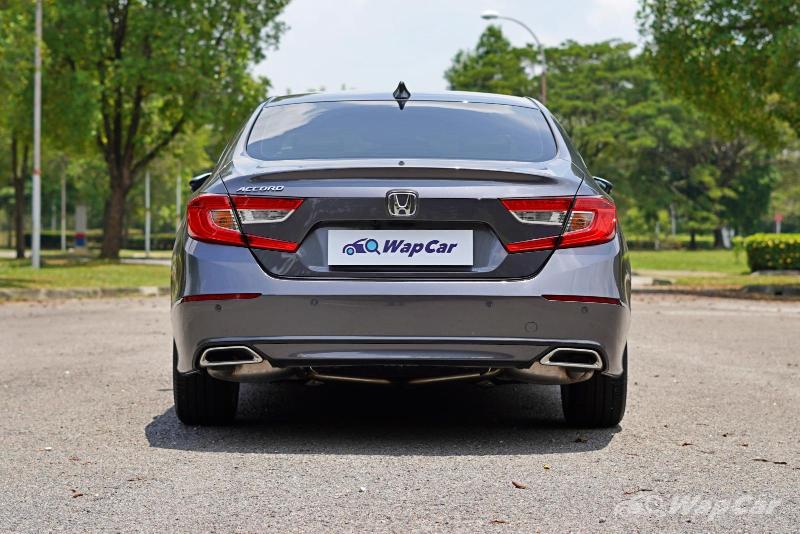 Compared to its rivals, the Honda Accord is surprisingly the least engaging to drive. The Camry feels more organic, the Passat is more agile, and the Mazda 6 is sharper still. That isn't necessarily a bad thing depending on your preferences, you may prefer Honda Accord's easy-going behaviour. 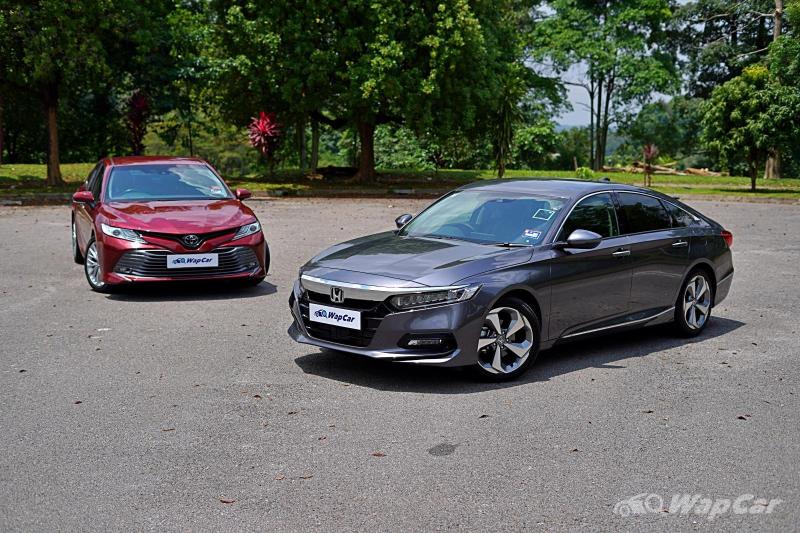 What the Honda Accord has over its competition is luxury limousine-like interior space. The rear seats are comfortable with acres of legroom. It also has the most complete ADAS with Low Speed Follow.

As I've said before in the comparison, Honda Accord may not be the most engaging to drive but it's properly equipped, enormously spacious, relaxing to drive and to be ferried in.