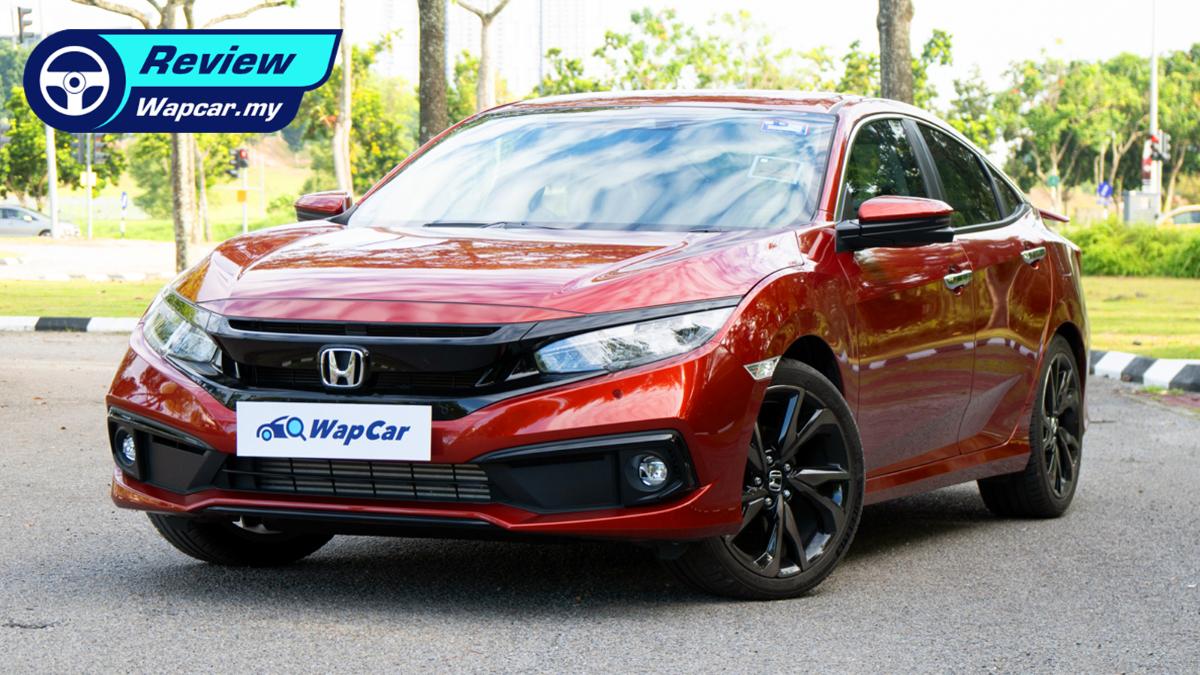 The Honda Civic is one of the cars with the longest legacy in the world, it's a product that has been around across centuries and it's still living strong (somewhat) despite a few ups and downs. With the world shifting to smaller segment cars and SUVs, is it still worth considering? 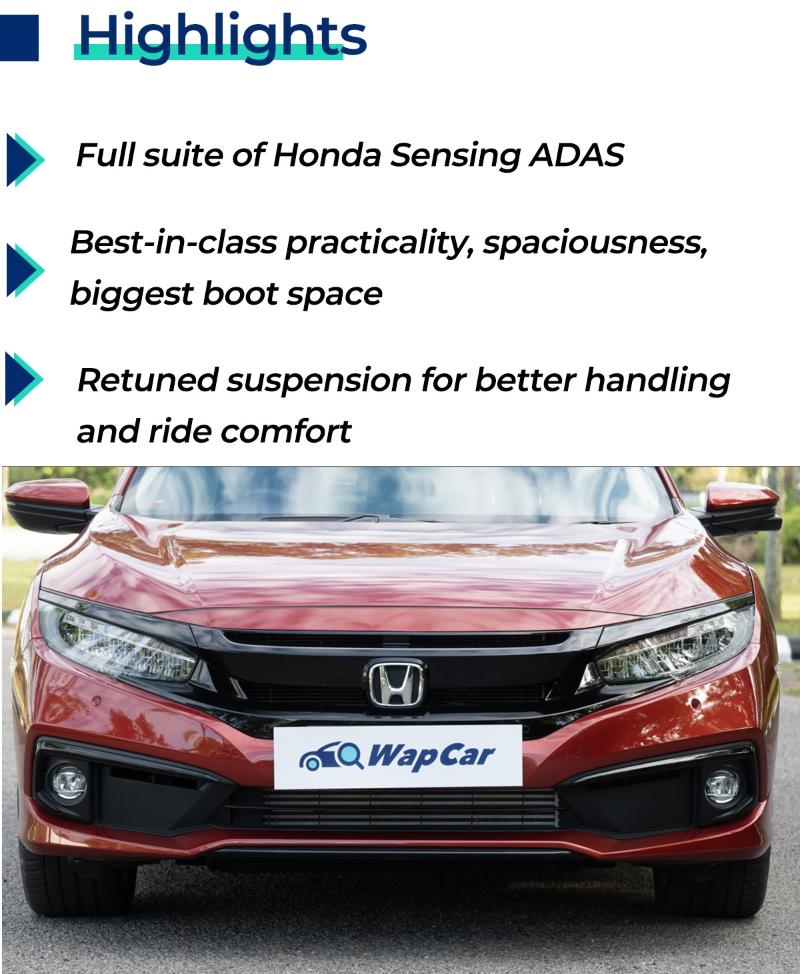 Now in its tenth-generation, the Honda Civic FC have since made a powerful comeback after a few uncompetitive years. Many were enamoured by the new 1.5-litre turbocharged engine and Honda's first-class practicality the brand is now synonymous for. 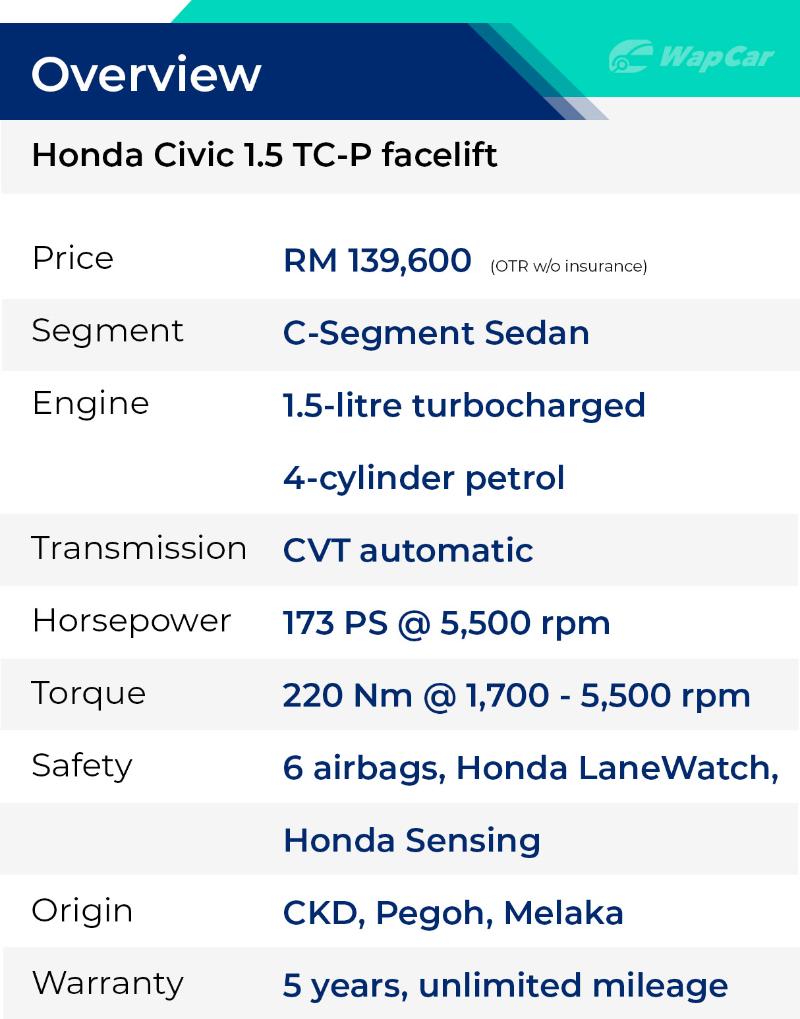 While the usual saying is to not fix what's not broken, a facelift arrived in February 2020 to breathe some modern and safety updates into the Civic to keep up with the times.

With new sleeker looks and a few modern techs, does the Honda Civic FC facelift live up to its legacy? 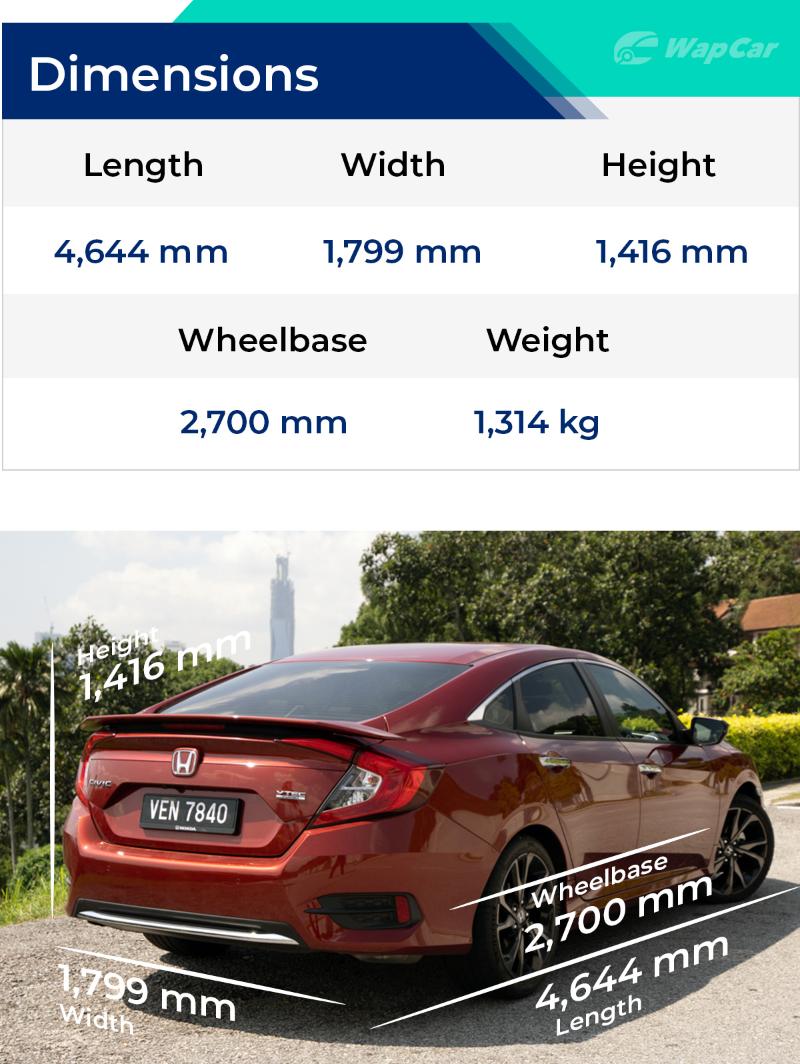 With the facelift came a few cosmetic changes to the Honda Civic as well. Metaphorically, you can say that the Honda Civic has shed the tuxedo jacket for a sleeker, more aggressive racing suit.

On this range-topping Honda Civic 1.5 TC-P you see here, a piano-black front grille has replaced the chrome bits that used to dominate the front, since the piano black grille was already a popular modification that pre-facelift owners favour.

The bumper has been entirely redesigned to give the fog lamps more prominence on the front exterior look. 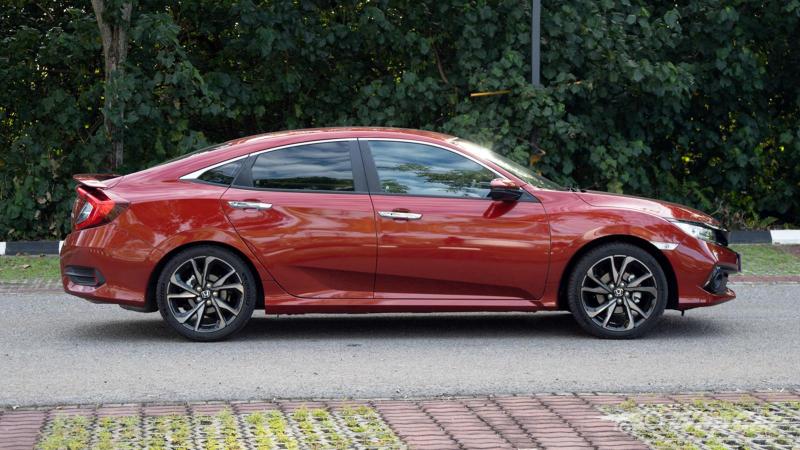 On the back, the Honda Civic FC facelift get a new spoiler on the boot lid and extra chrome bits on the lower part of the bumper.

For this range-topping variant, the Civic wears new 18-inch wheels wrapped in Michelin Pilot Sport 4 with measurements at 235/40. 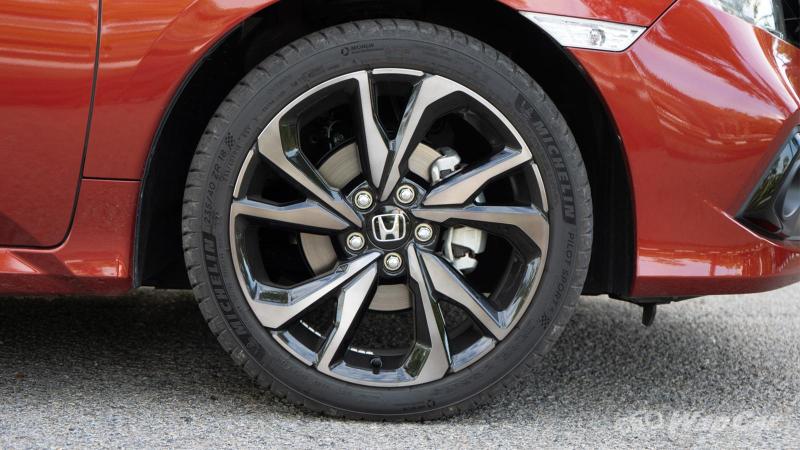 A new colour, known as Passion Red Pearl, was made available when the Civic was updated. As you can see, the unique red colour brings out the lines on the Civic's exterior further enhancing the car's aggressive edgy look.

While we like the Civic's overall new look, there is one thing we cannot understand and that is the presence of the rear spoiler. The spoiler offers no functions that would help the car save more fuel or even improve the aerodynamics since there is no gap between the spoiler and the boot lid. 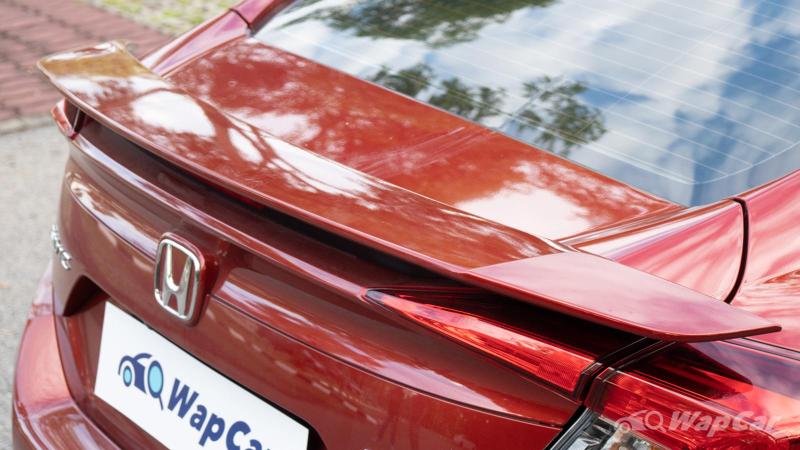 From our experience, the parts that are not attached to the connection between the spoiler and the lid feels flimsy and looks like it would break with a simple snap.

Panel gaps range between 4.5 mm to 1.0 mm while the paint thickness is consistently in the 120s um. 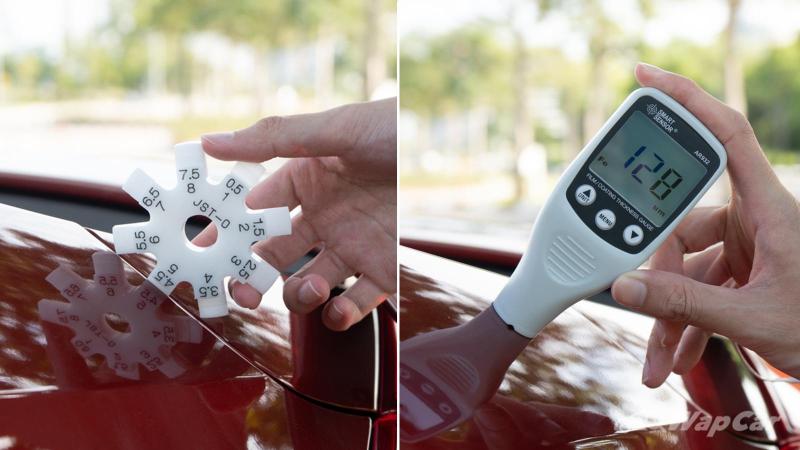 Let's take a moment to celebrate the return of physical buttons to the Civic's updated interior. Looks like Honda has heard the complaints about the inconvenience of having all the controls, including the air-conditioning, built into the touchscreen panels.

While having a minimalist interior help win points for looks, ergonomics wise, not having physical buttons means we can't change the settings on the fly. 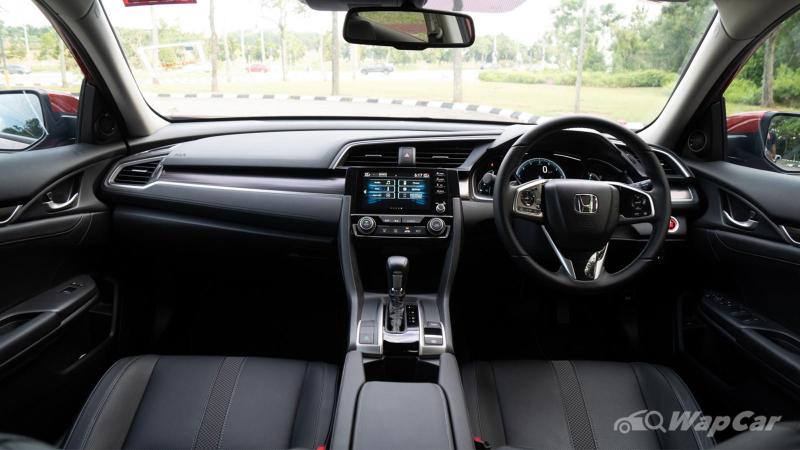 But Honda did not overdo the buttons to the point of confusion, the buttons are limited to important functions such as a home button, volume control along with the A/C fan speed.

All variants get automatic wipers while the backseat comes standard with 60:40 opening split.

Other than the new fabric seats, the rest of the Honda Civic's interior remains the same as the pre-facelift. So you still get class-leading practicality and space compared to its closest rivals the Toyota Corolla Altis and Mazda 3.

Built quality gets a massive thumbs-up from us as there aren't any rattling panels to complain about and the materials used feels premium. 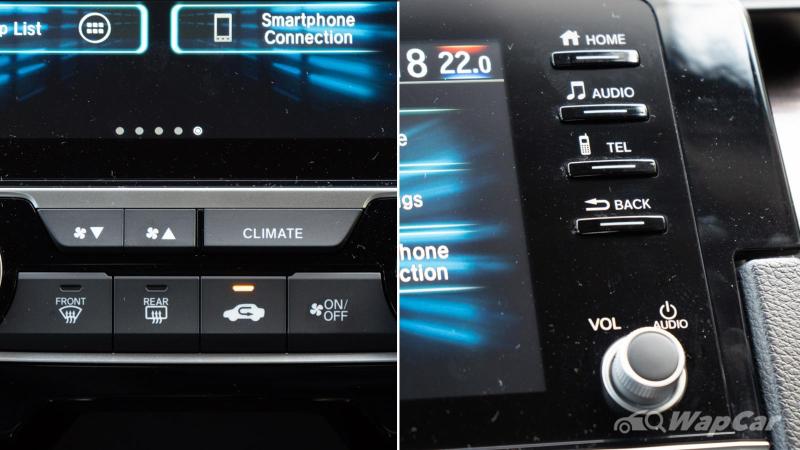 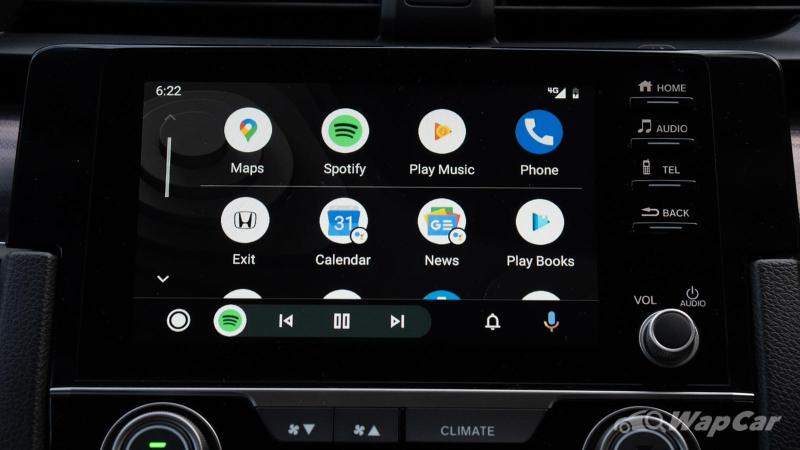 Driving Performance - Still one of the most powerful in its class

Under the bonnet still rests the evolutionary 1.5-litre Earth Dreams VTEC four-cylinder turbocharged engine first introduced during the launch of the Honda Civic FC. No changes were made during the facelift, so you still get 173 PS and 220 Nm of torque. 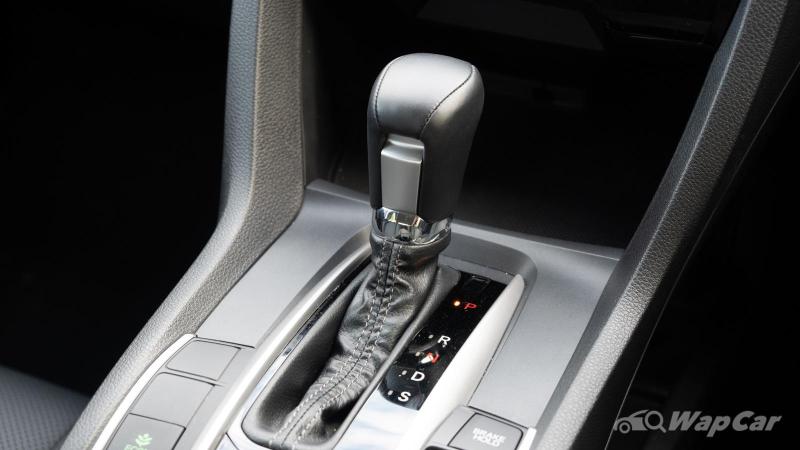 Yes, the Honda Civic just lacks that fun in the drive unlike the Mazda 3 or even the Toyota Corolla Altis which was specially tuned for comfort rather than to give you a fun drive.

The Civic is not a car tuned to drive with character or spirit, its driving experience can be described as just adequate as the steering has just the right weight to it while the CVT has a slower response time. 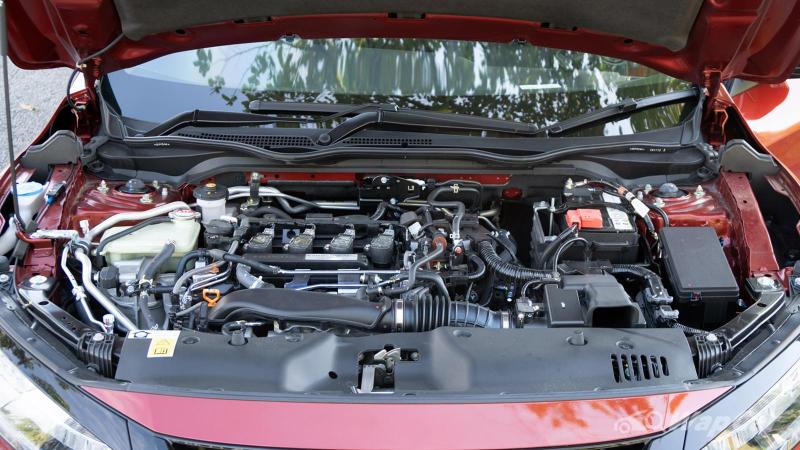 In other words, despite the Civic being the most powerful C-segment sedan of its class, it is tuned better for daily city driving experience.

But we can confidently say that the Honda Civic FC facelift does corner better than the pre-facelift thanks to the new wider Michelin Pilot Sports 4 tyres. There is just that much more stability when it goes through the corners giving you a little more confidence. 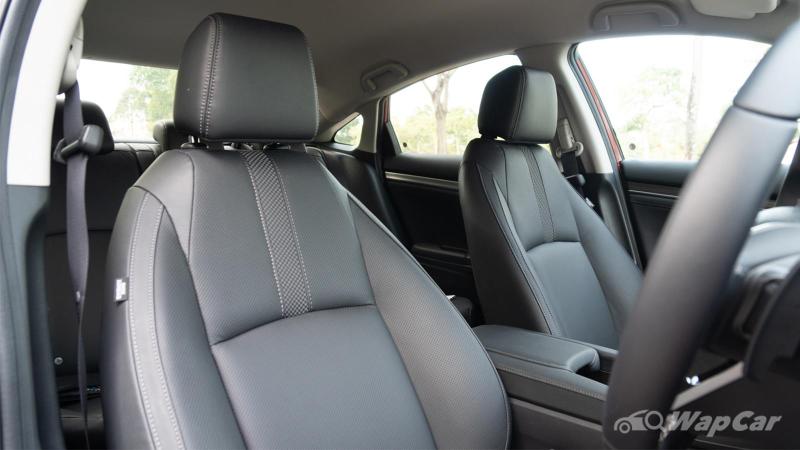 Like the engine, no changes were made to the CVT gearbox either. So, the Civic still manages the 0-100 km/h time in 8.2 seconds, it's still fast compared to its closest competitors though it is lacking that direct feeling that the Mazda 3 will give you when you stomp on the throttle due to the CVT.

While the Civic does have the most powerful output numbers, unfortunately, the Civic's driving experience just feels a tad bit stale for us. 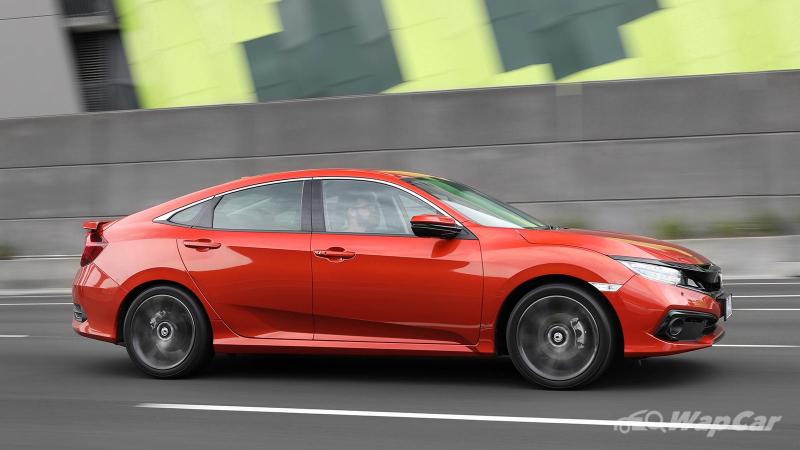 Need we say more about the Civic's comfort? Being a Honda, we expected the Civic to provide us with the best comfort and Honda did not disappoint.

It helped that Honda also retuned the Civic's suspension in the cycle update allowing the car to easily iron out any blemishes on the road, so the facelift is actually more comfortable than the pre-facelift Civic.

Before the update, the pre-facelift Civic FC feels floaty at highway speeds and unstable in the corners, but the facelift has addressed these issues, giving passengers more comfort especially when on a highway cruise. 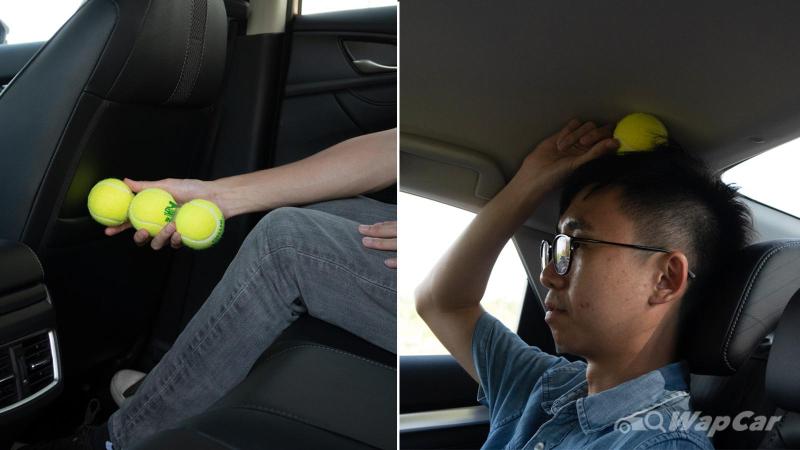 Of course, when it comes to space, the Civic continues to impress with at least 4 tennis ball width of knee room even with the front seat adjusted according to a person of average height.

Passengers of average height in the back seat also get 1 tennis ball worth of headroom. Everybody will have plenty of space to stretch out in the Civic's rear seats. 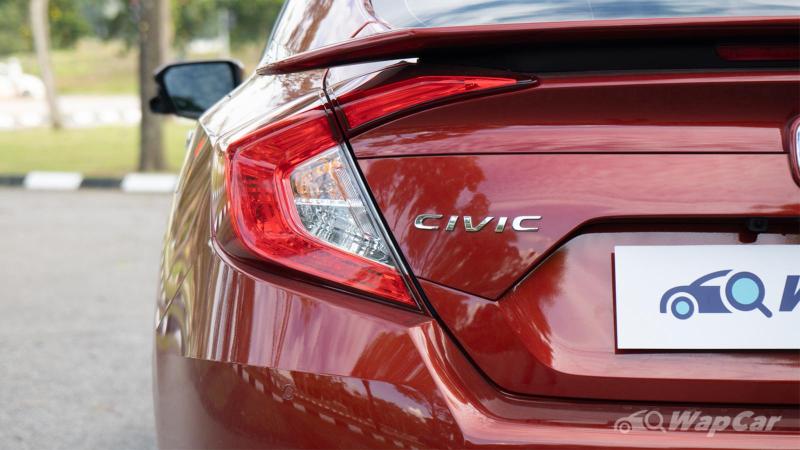 But there are still a few complaints regarding the Civic's seating, the sponge in the headrest is too hard, the hardest we have ever experienced, which brings the comfort levels down a notch. 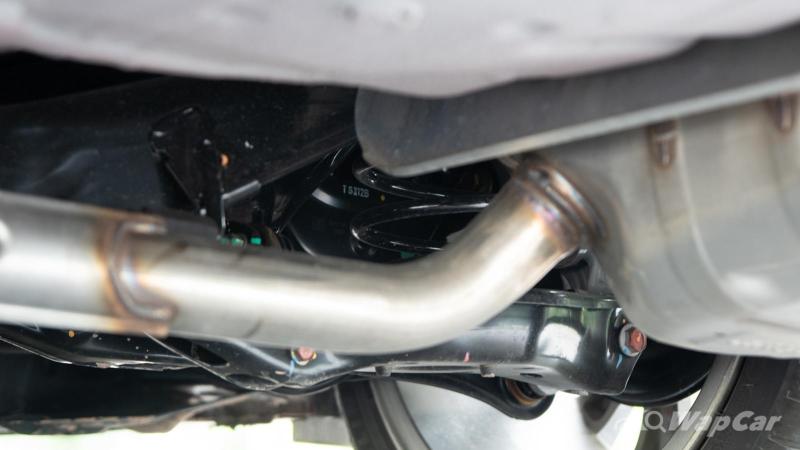 This is perhaps the frequentcy of road noise is lower so it is less tiring when driving around in the Civic. If you're looking for a quiet sanctuary after a long day at work, the Civic would be the better choice between the 2. 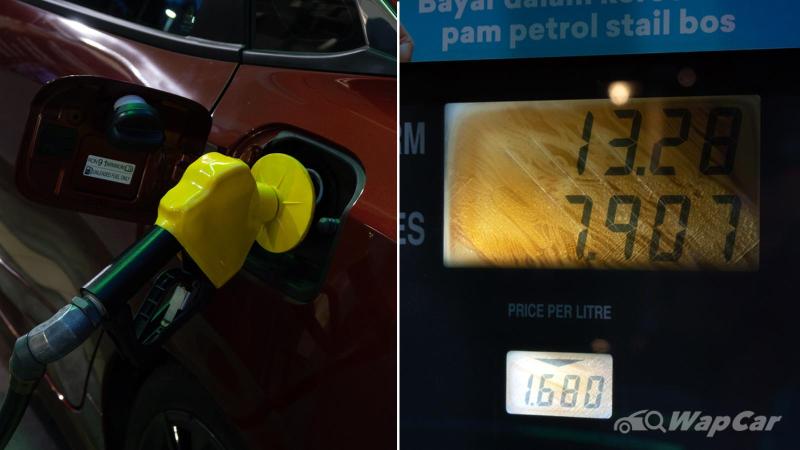 After a 100 km distance with a mix of 70 percent highway cruising and 30 percent stop-go traffic, the Civic's fuel reading returned 7.9-litre / 100 km.

For reference, the Corolla Altis returned 7.7-litre worth of fuel used while the Mazda 3 returned 7.6-litre.

In other words, the Civic's Earth Dream engine is still a fuel-sipping choice. 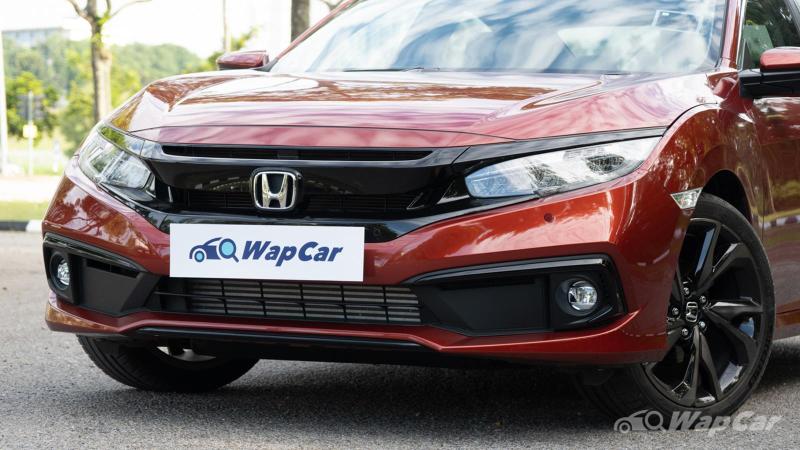 Conclusion - No wonder it's still a popular choice

It is easy to see why the Honda Civic FC facelift is such a popular choice as a C-segment sedan. Not only does it boast class-leading practicality and comfort levels, but the Civic also has the best-in-class safety systems.

Though it might not offer the best driving experience, with the addition of Honda Sensing and Honda LaneWatch, along with the wider tyres and retuned suspension, the Honda Civic offers drivers more confidence when it comes to cornering or even when driving in less optimal conditions. 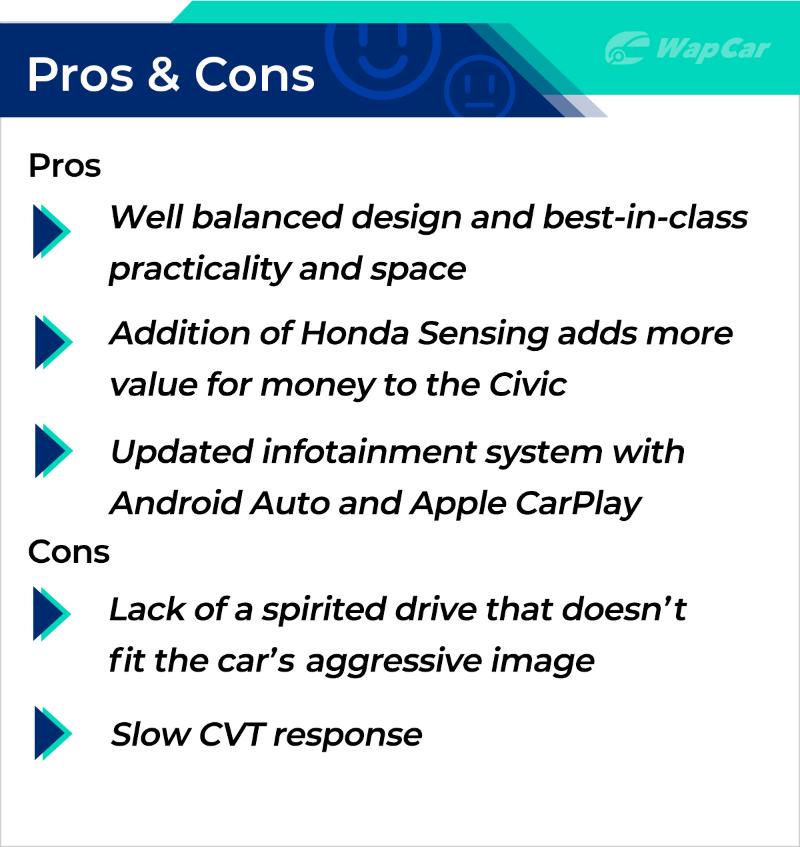 So the best driving experience is all you need, then we all know the Mazda 3 will be the best option for you. But if you're looking for a balance between a spirited drive and comfort, the Toyota Corolla Altis is still the better option. 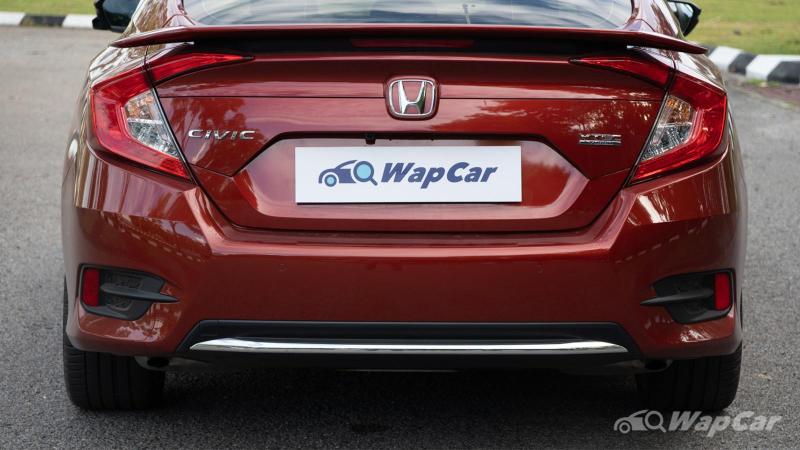 So, if you're looking for practicality in the city, the Honda Civic FC facelift is the all-rounder that will meet all your fussy needs.