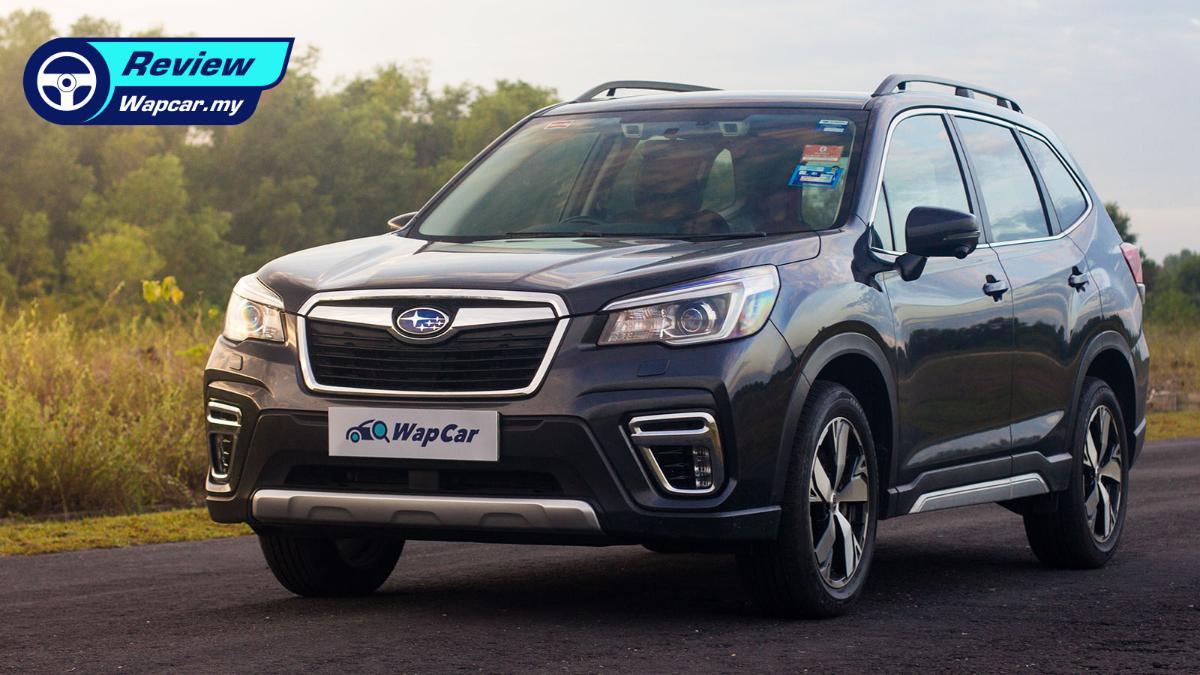 The Subaru Forester is not the most popular choice for a family SUV in Malaysia. There's nothing wrong with the car, it's just that the segment is competitive and the choices are many. With a decent ride and some interesting AWD technology, it's really a shame that the Forester has no allure to the casual shopper. I feel it deserves a little bit more attention. 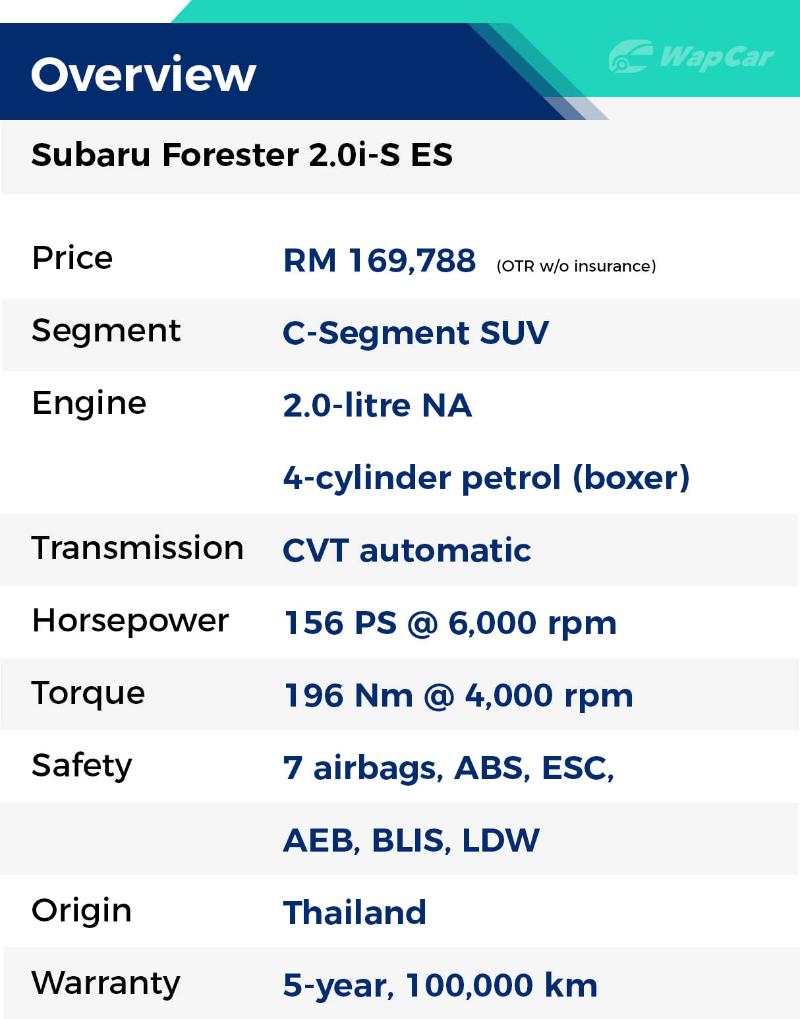 For a RM 169,788 price tag, it is a bit disappointing that the naturally-aspirated Forester is out-figured (power & torque) by its turbocharged rivals. 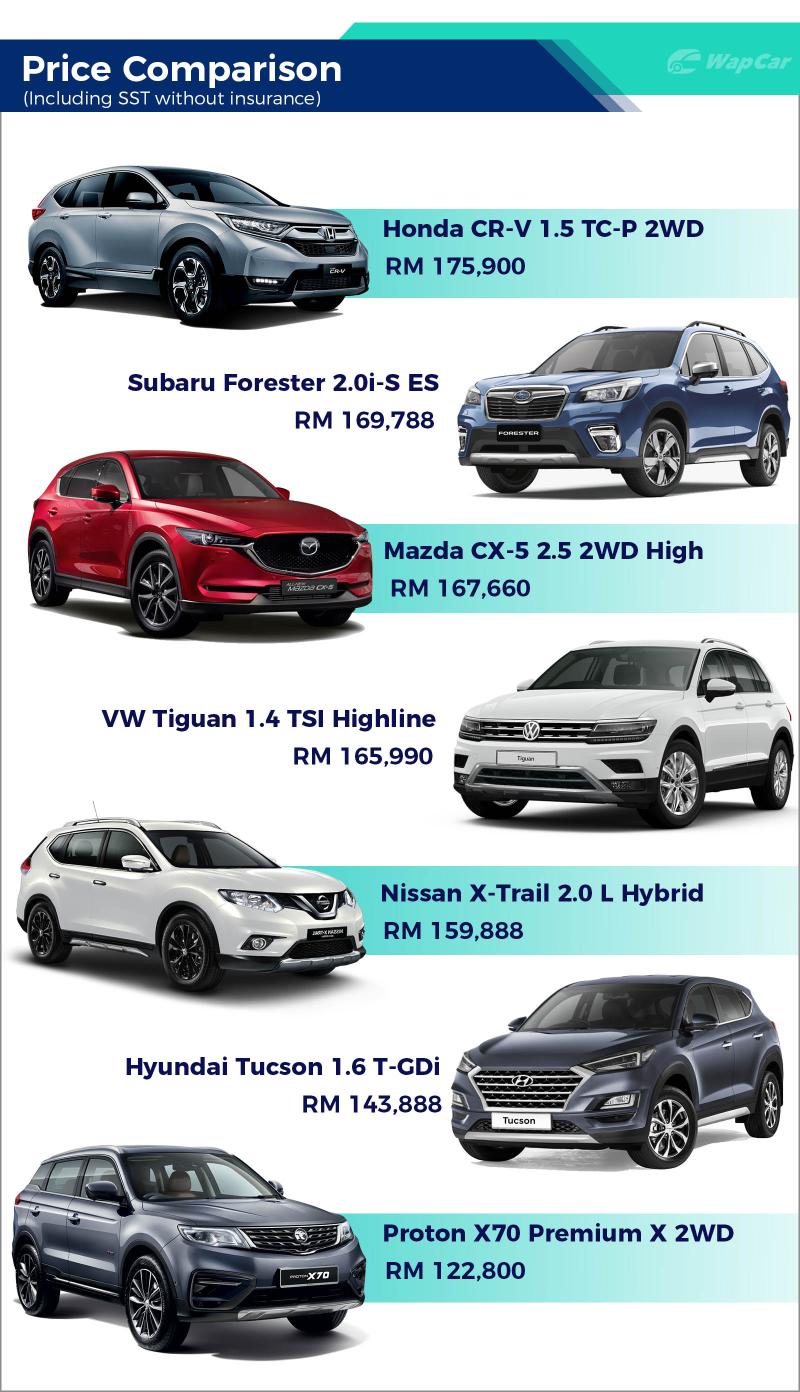 We say almost because lane keep assist and 360-degree parking camera is absent. However the latter is available in the Forester GT. 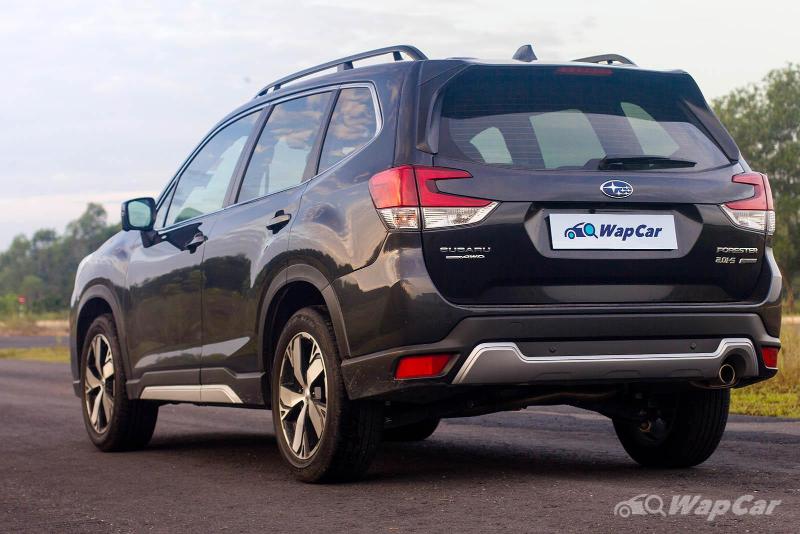 The styling is practical, or for the lack of a better word, boring. It is not aggressive like Mitsubishi's "Dynamic Shield" or distinctive like Lexus's "Spindle Grill". While BMW's ever-growing "Kidney grill", generates mixed feelings, the Subaru Forester's styling doesn't spark any feelings at all. It is after all, a practical, utilitarian car. 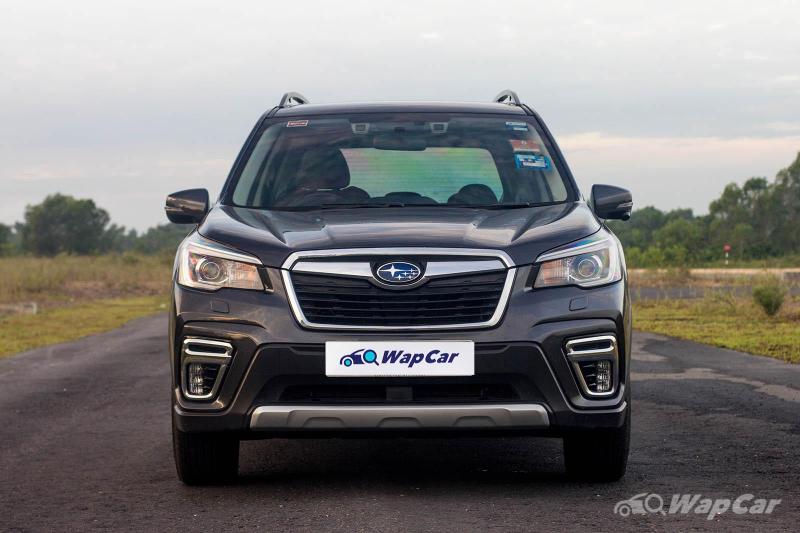 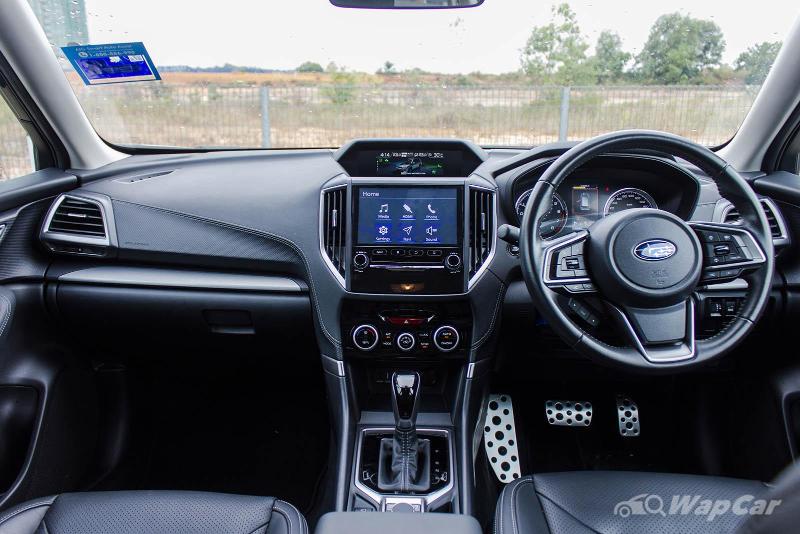 On the inside, the 2020 Subaru Forester looks like it was designed by a driving enthusiast who was forced to make a family SUV. Take a closer look and you will see sporty elements in the details. 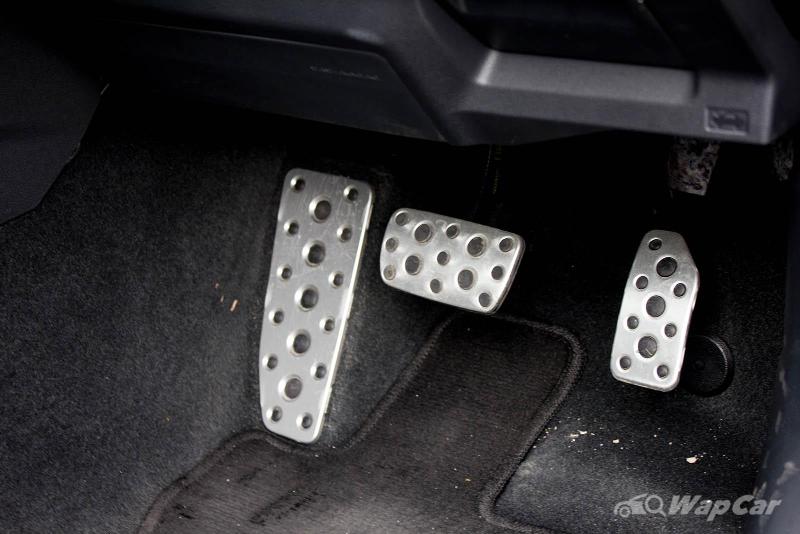 The 2020 Subaru Forester has aluminium foot pedals and a large and sporty footrest. That's some sport car stuff right there. The steering wheel is compact and ergonomic. It's actually smaller than the steering wheel in a sporty Renault Megane RS. The Forester's steering wheel feels good to touch and the control buttons are intuitive. 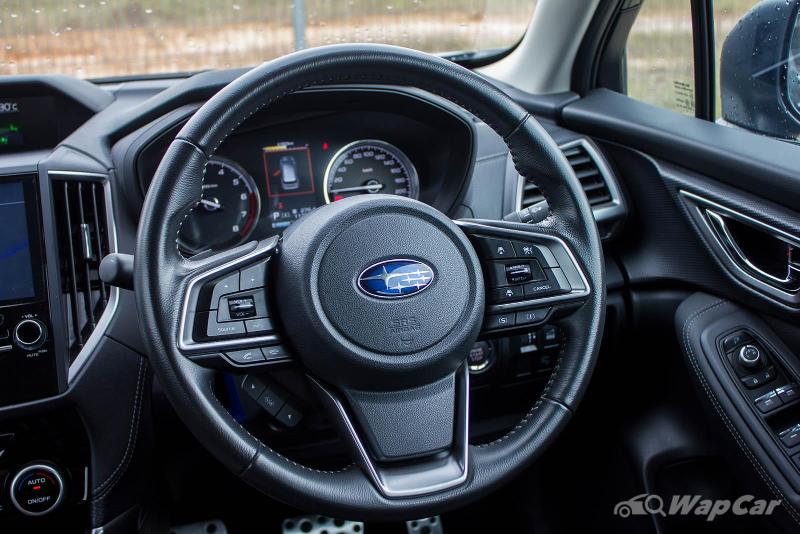 Mimicking the three analogue dials in a "JDM Tuner car", the centre digital display shows you the oil and water temperature gauges and the accelerator input. No boost gauges are available simply because there is no boost in the 2.0 L Subaru Forester. 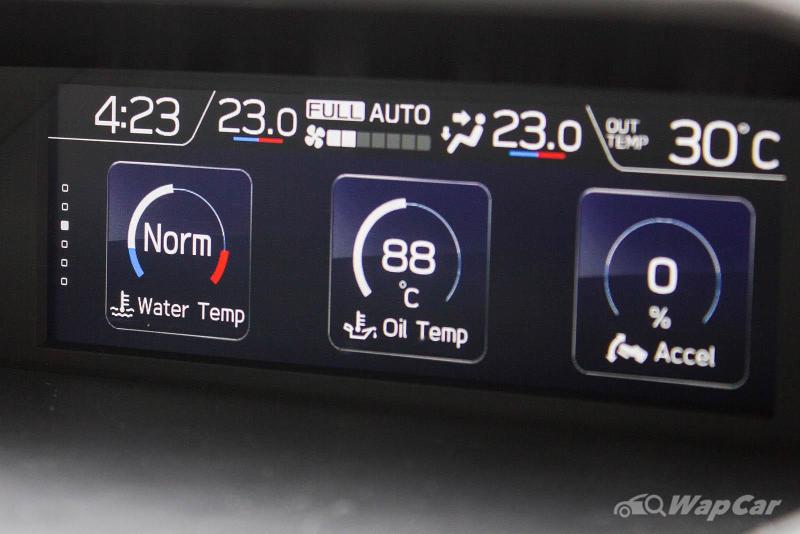 The gear shifter feels firm and gives you an added sense of confidence. The dashboard dials are easy to reach so you barely need to take your hands of the wheel while driving. Unfortunately, Android Auto/Apple Car Play is not available in the 2020 Subaru Forester 2.0i-S ES. That is a feature reserved for the Subaru Forester GT Edition. 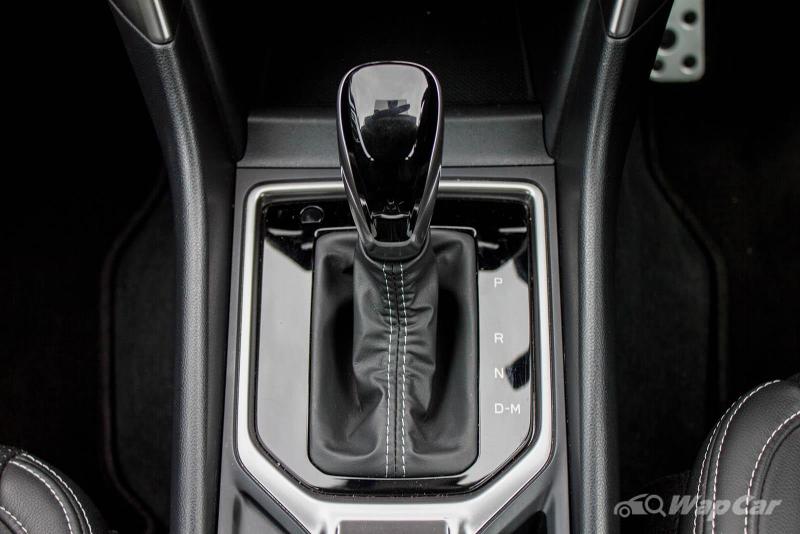 The general consensus from friends and family was that there was no memorable & distinct feature inside the car. While I may agree that the Forester's interior is not distinctive, there are features inside the Forester that one could appreciate.

The fit and finish of the Subaru Forester is rather well done and the curve that flows from the door into the dashboard is a nice touch. 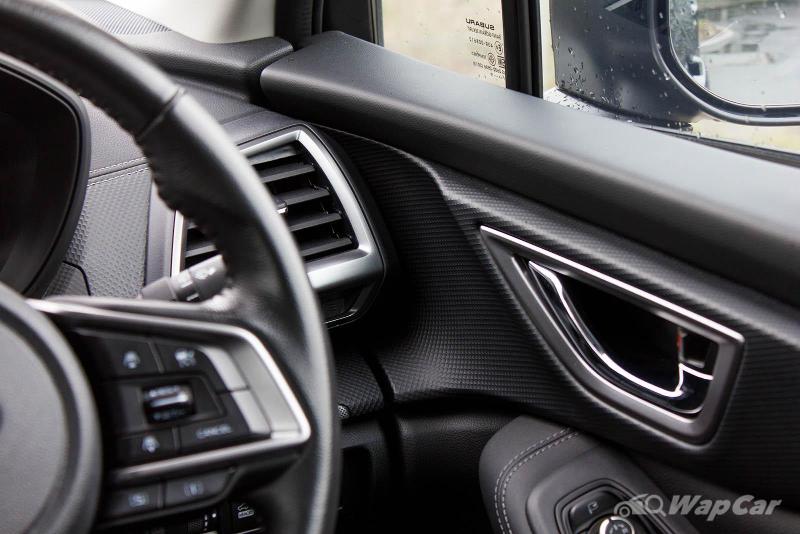 The seats are decent and the removable seat covers have a tight and neat fit. Due to the transmission tunnel, the foot well may feel a little cramped for first timers. Once you get the right seating position, the Subaru Forester is a comfortable place to be in.

The power adjustable seats let you find the seating position that gives you good visibility over the front portion of the car. 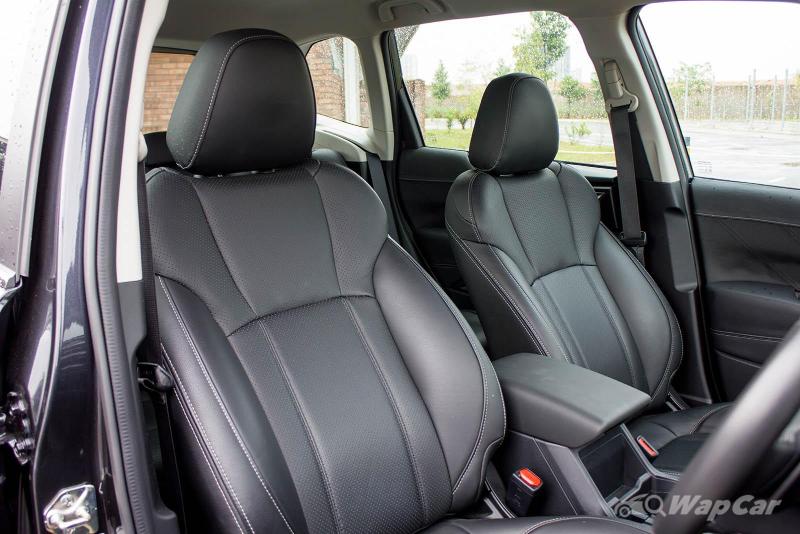 The second row gets decent legroom and headroom. There is a generous amount of space in the second row to move about. Unlike the Volkswagen Tiguan, there are no stowable trays for the rear passengers. 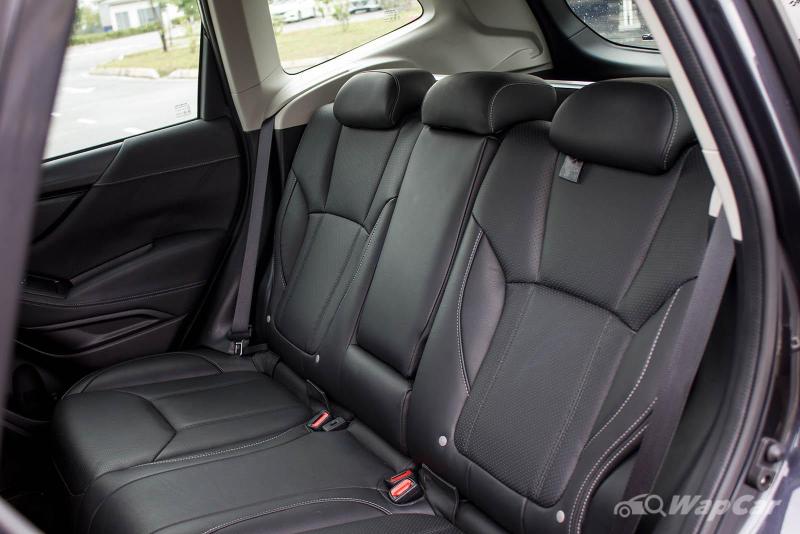 Even with the rear head rests up, rear-view visibility is still decent. The door trims have an overall cohesive design and decent texture. The door pockets however, are quite small. 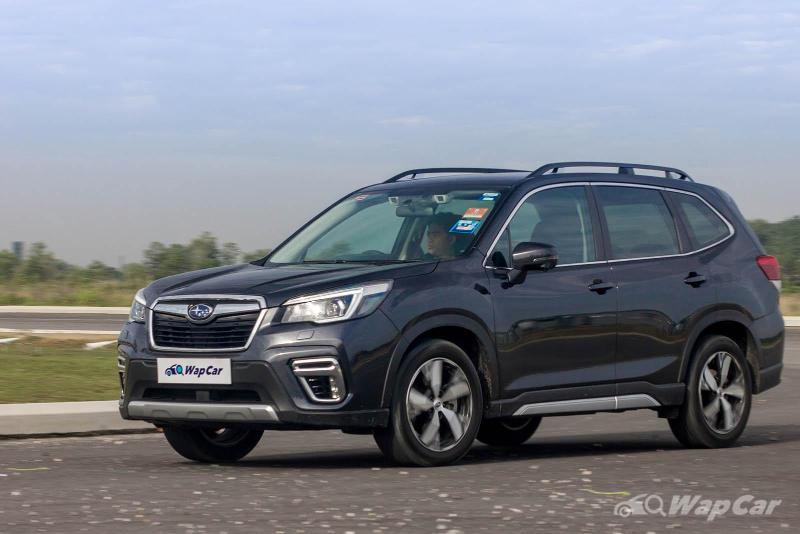 Knowing that a non-turbo 2-litre engine and a CVT transmission lay underneath, I was not expecting much from the Subaru Forester. The Subaru Forester isn't a fast car, but the driving experience can get quite exciting. In "S" mode, the CVT simulates a gearshift pretty damn well. Paddle shifters are provided in case you feel like taking control. 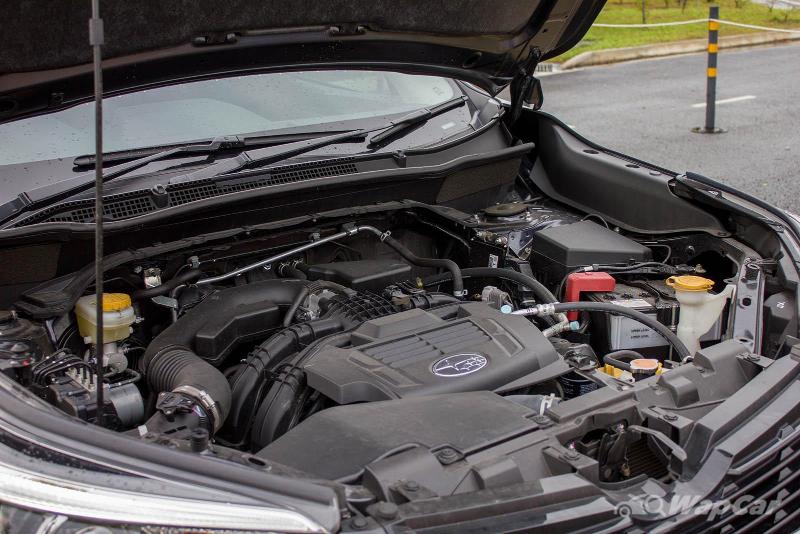 By default ("I" mode), the CVT behaves like a CVT should. You can change that with the "S" button on the steering wheel to get some pseudo-gearshifts. Thanks to the low centre of gravity of the boxer engine, even the average driver would feel more confident driving through twisty roads with the Subaru Forester.

Maximum power output is 156 PS and maximum torque is 196 Nm. Upon cold starting, the engine revs at around 1,600 rpm and sounds eager to get into action. Wait for a while and it calms down to around 800 rpm. Generally, Subaru Forester cruises at a very relaxed cadence. Highway cruising can be done at around 2,000 rpm. 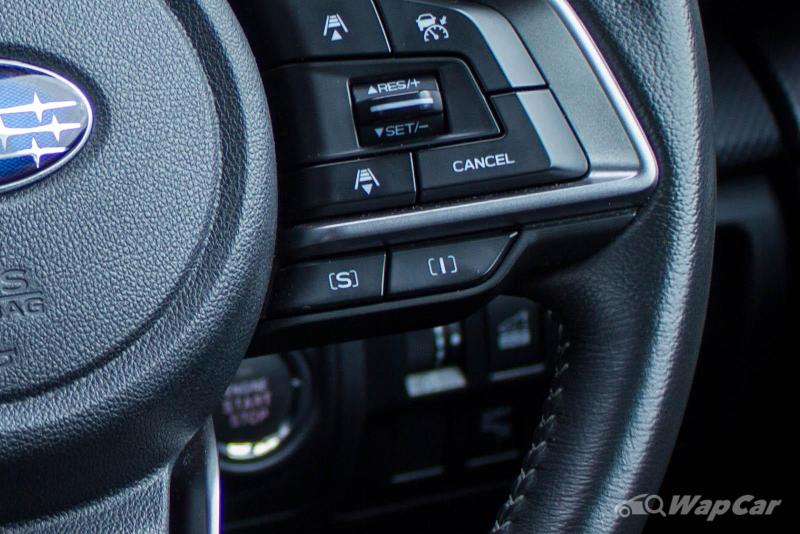 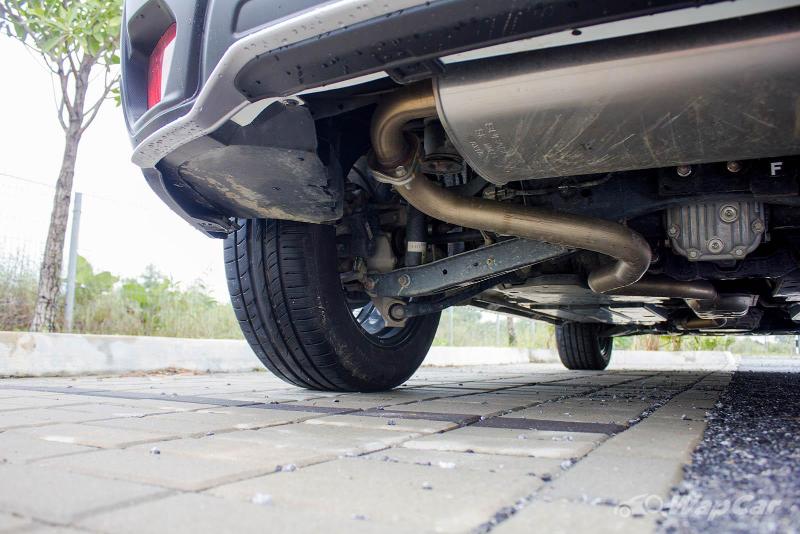 The combination of the boxer engine, symmetrical AWD, and double wishbone suspension in the rear lie underneath the bland exterior of the Forester. Believe me when I say they're not just fancy names stuffed into a brochure. The good handling of the Subaru Forester comes in very handy in less than ideal driving conditions like wet roads and loose surfaces. "Confidence in motion" is no bull. 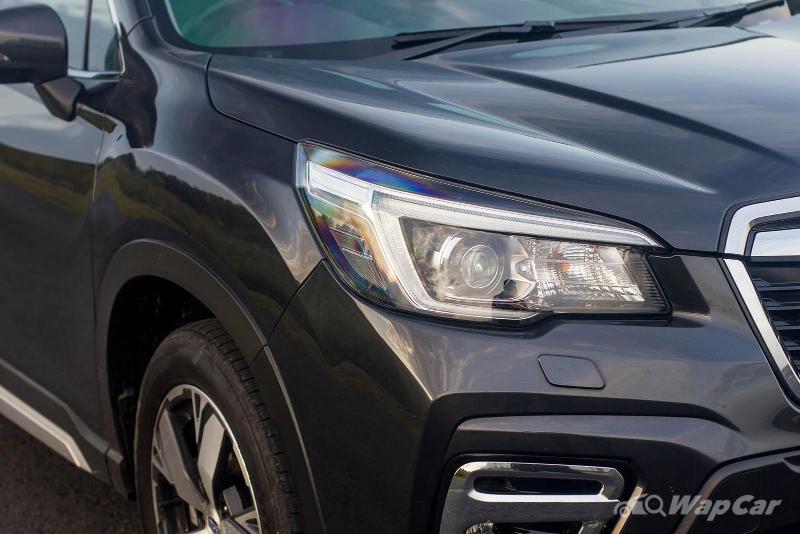 A feature that improves the driving experience is the SRH, or Steering Responsive Headlights. The projector LEDs turn with the steering wheel. Upon starting up, the projector lights move to the left and right, like an athlete stretching before a run. 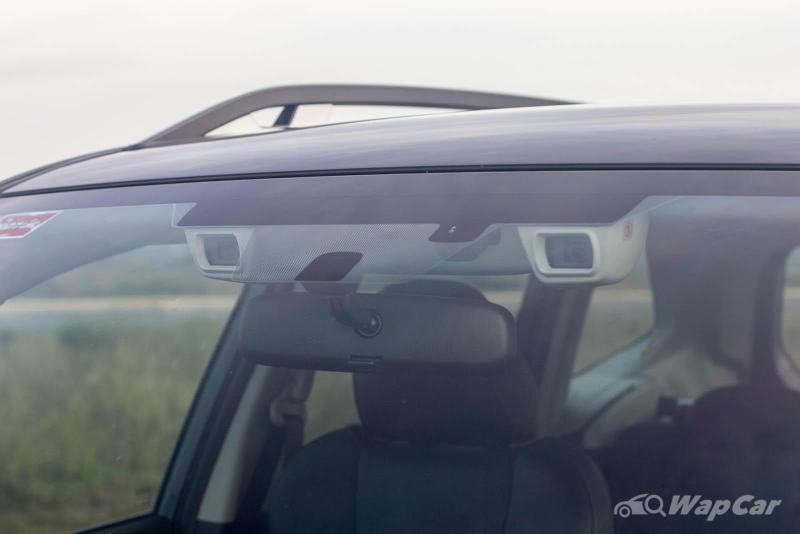 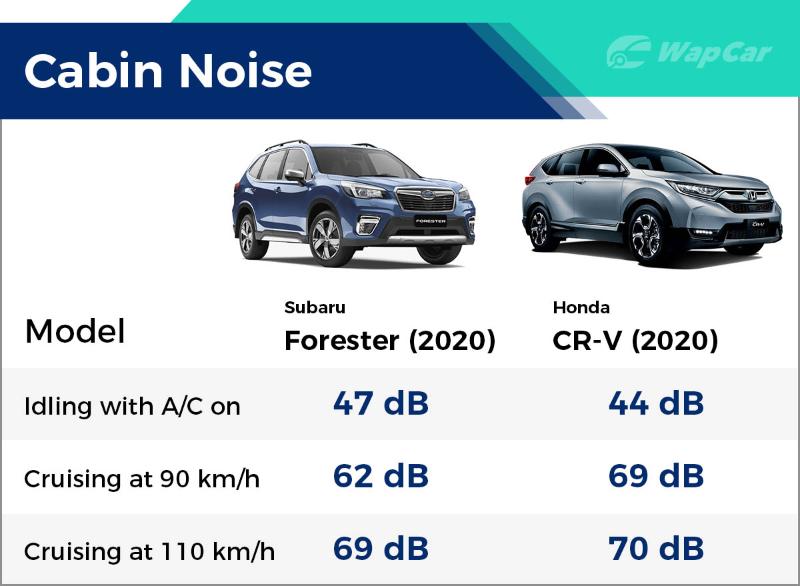 At cruising speeds of 90 km/h and 110 kmh, cabin noise of the Subaru Forester was quieter than the CR-V. 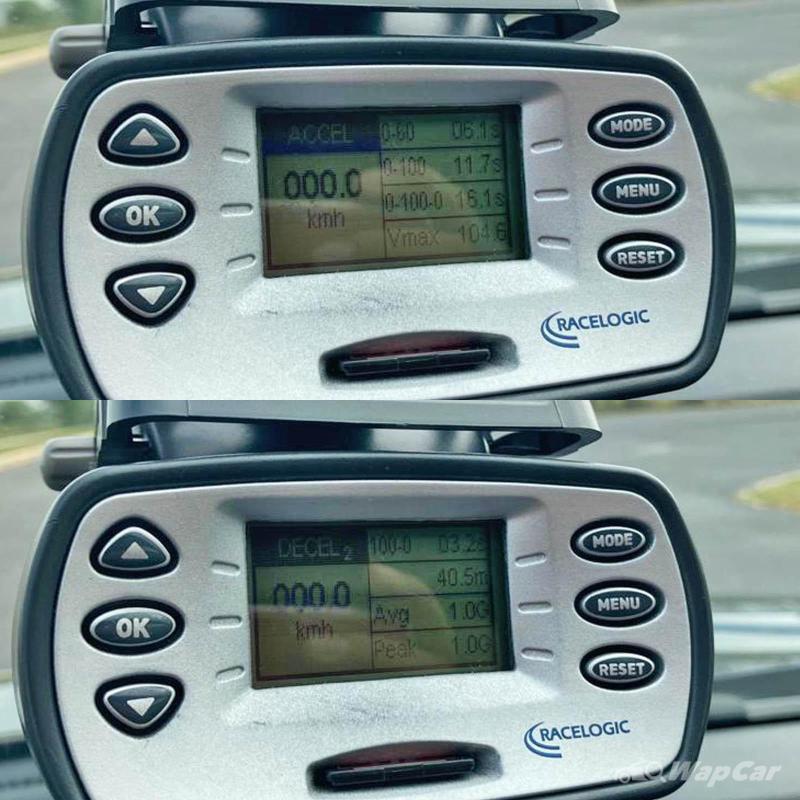 From our own testing, 0-100km/h was recorded at 11.7 seconds. Stopping from 100km/h was achieved in 40.5 m. In real driving conditions, the acceleration of the Subaru Forester may feel a little too relaxed if the "S" mode is not engaged.

At 505-litre, boot space of the Subaru Forester (with 5 seats up) is not the largest in its class. If large boot space and a low tailgate height is what you're looking for, the Honda CR-V is your best bet. 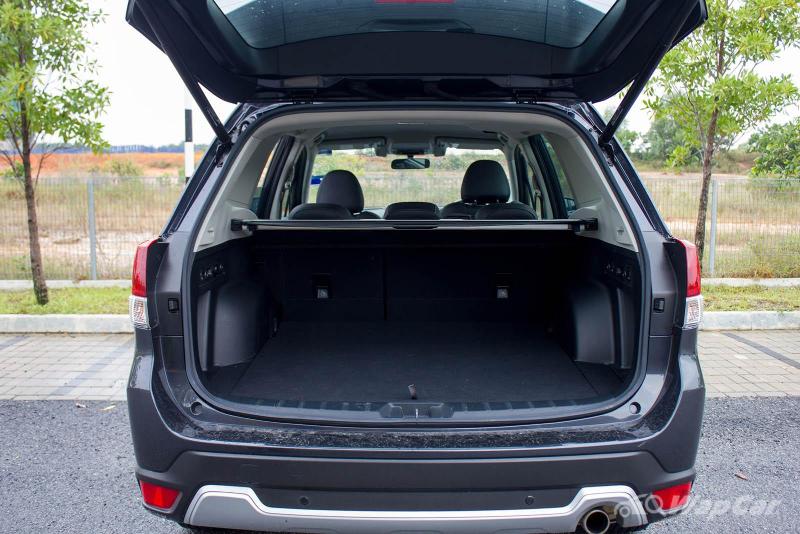 The power boot is very handy. You can open and close the tailgate with a push of a button from the driver seat. "Boot memory" allows you to set your preferred boot opening height. 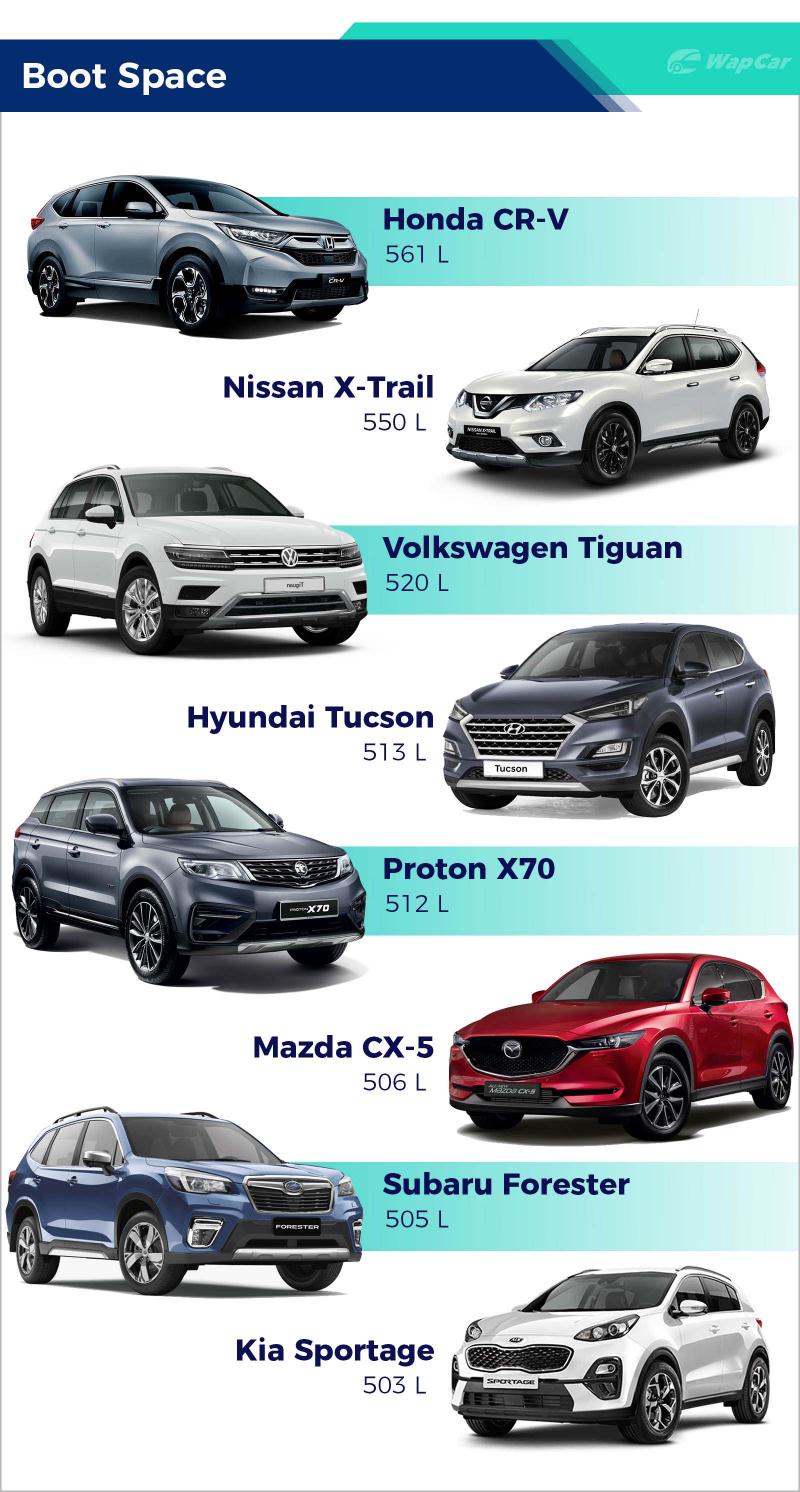 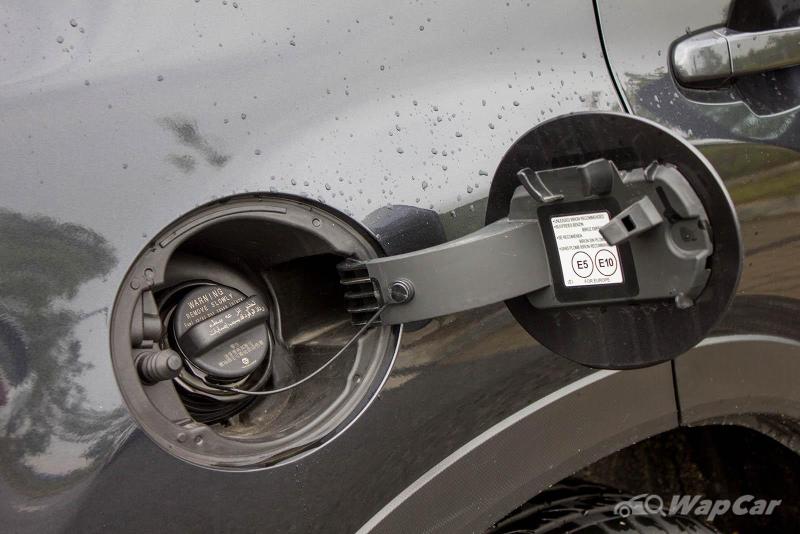 The only downsides of the 2020 Subaru Forester 2.0i-S ES are the smaller boot space, the lack of Android Auto & Apple Car Play, the lack of a 360-degree parking camera, and the bland exterior styling. 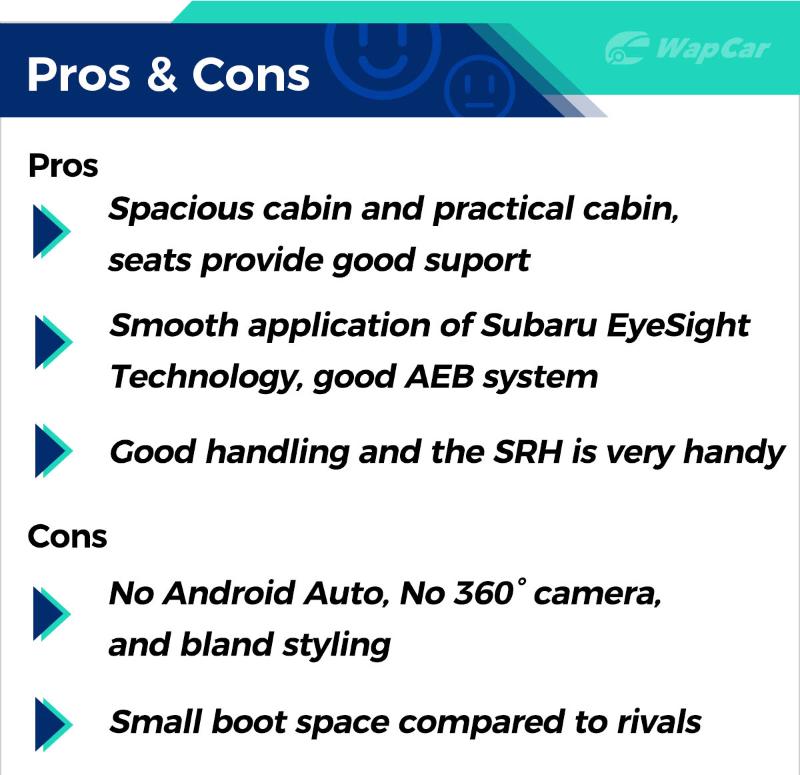 Thanks to the boxer engine, symmetrical AWD, and double wishbone suspensions, handling of the 2020 Subaru Forester is great. The sporty interior and SRH (Steering Responsive Headlights) make the driving experience more fun and engaging. 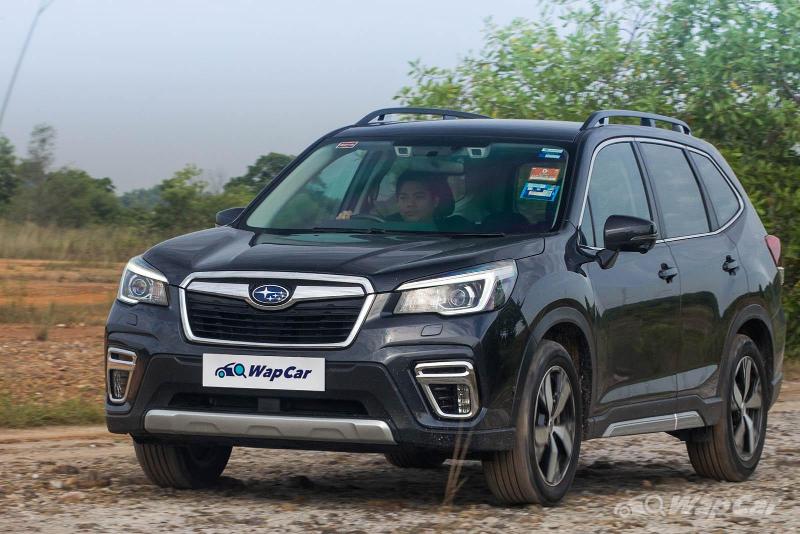 If AWD is a compulsory criteria for you, the Honda CR-V AWD, Mazda CX-5 AWD, and Mitsubishi Outlander are some alternatives you could consider. If you're just looking for a family SUV, you might want to consider 2WD options like the Proton X70, 2WD Honda CR-V, and VW Tiguan. 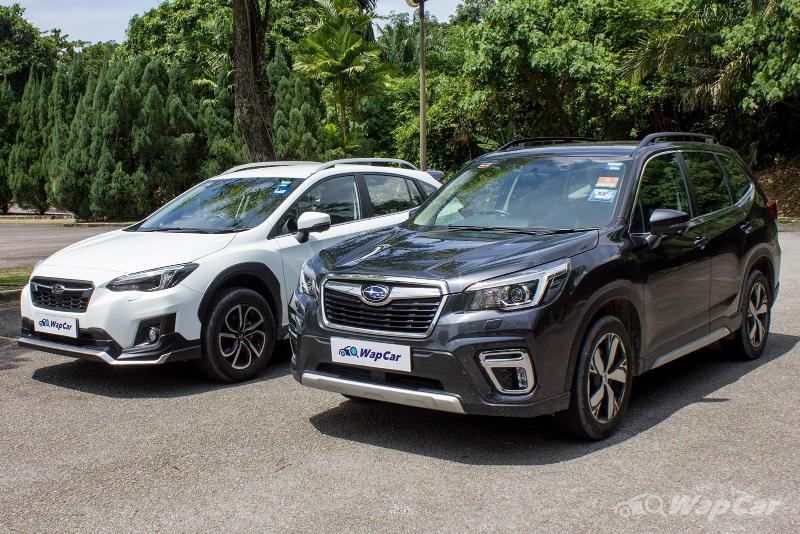 If bland styling is not a problem for you, the Subaru Forester is a good option to consider when shopping for a family SUV.