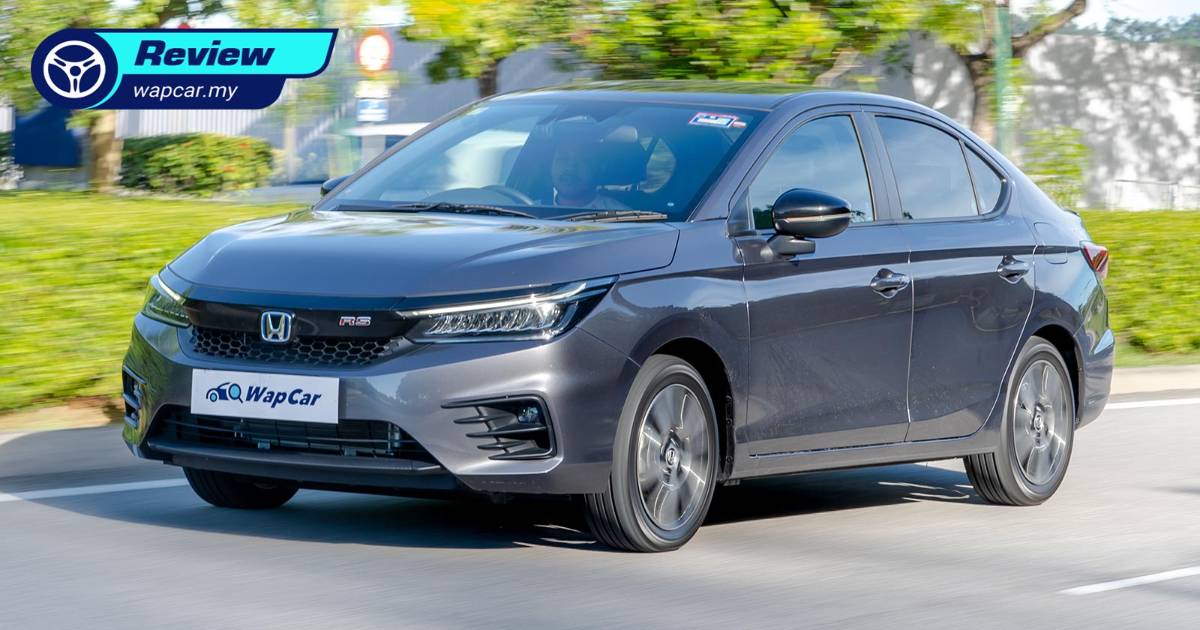 In 1984, Honda began a new development program codenamed the New Concept Engine (NCE). The targets were simple: create a 1.6-litre engine with a specific output of 100 hp/litre.

Nearly five years of development led to what we know today as the ‘B16A’ 1.6-litre VTEC engine first offered in the 1989 Honda Integra. A performance car for the common man. 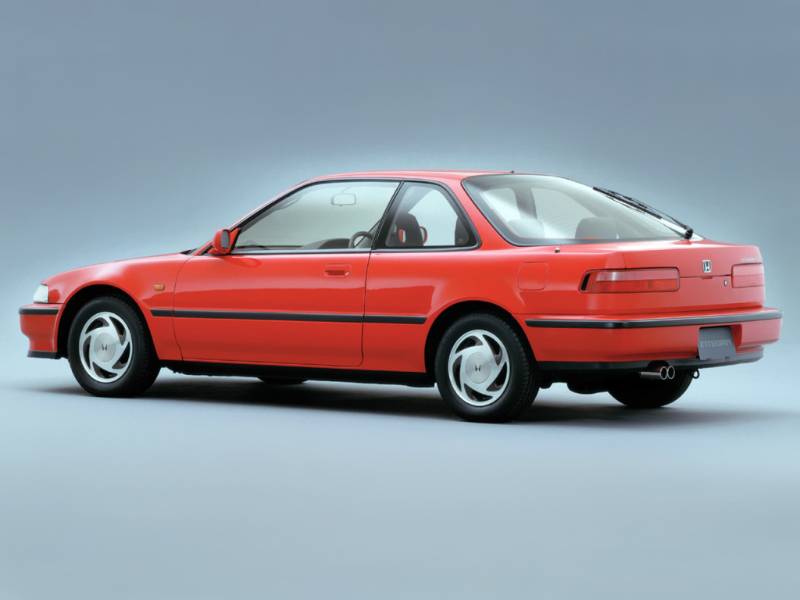 Of course, technology has moved on exponentially since then. But, with the Honda City RS i-MMD - is Honda now offering a performance hybrid for the common man, if so, is it any good? 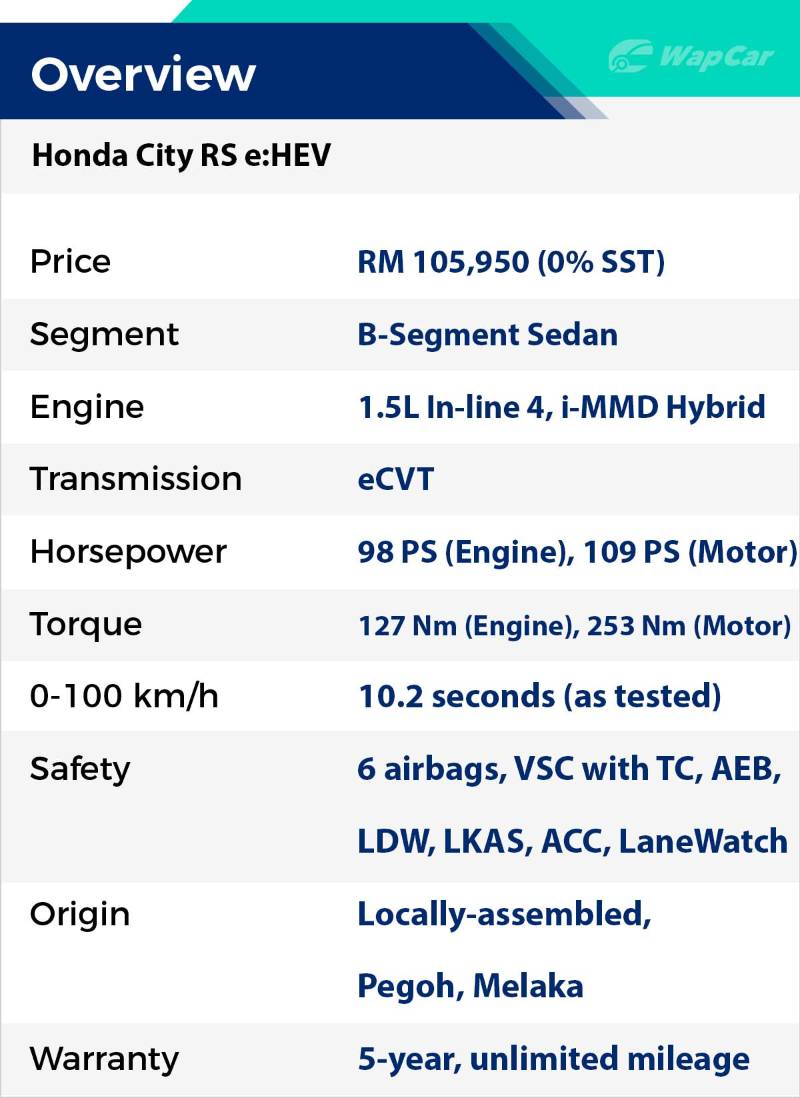 Exterior – Subtle hints of what lies underneath

In terms of aesthetics, the City RS demarcates itself from the 1.5-litre petrol models with the RS exterior package, which carries additional trim and garnishings to create a more aggressive look. 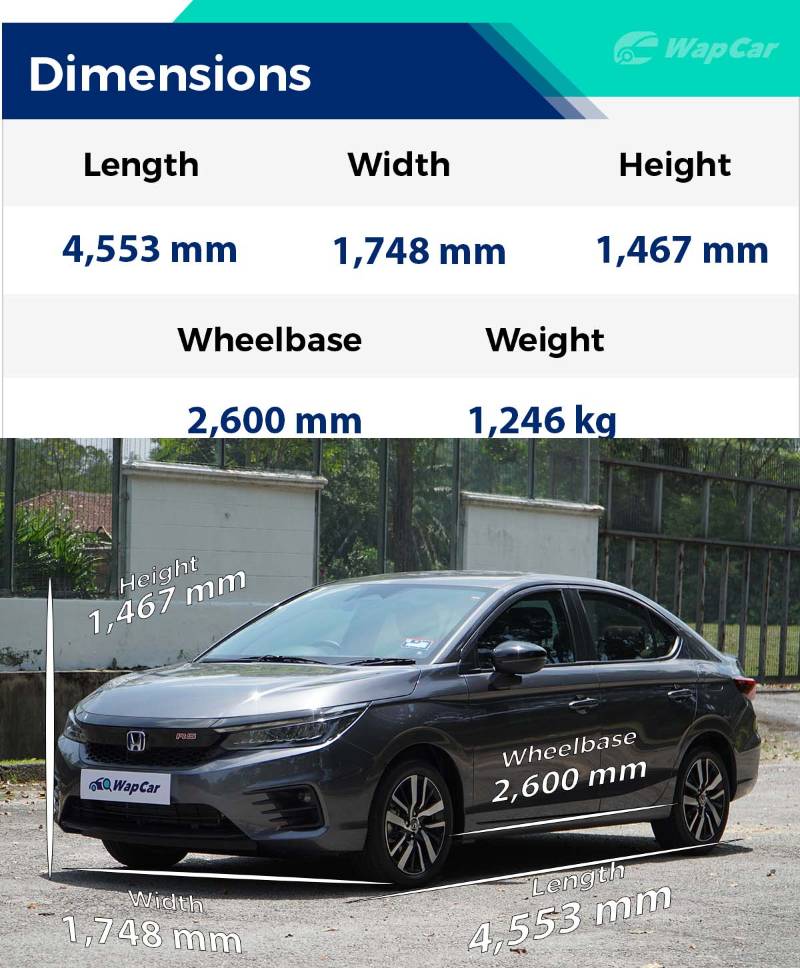 From the front, the City RS features a high-gloss black front grille with honeycomb inserts that is complemented by a redesigned foglamp garnish lower down. The keen-eyed will also notice the front bumper trim at the bottom of the bumper with a carbon-look finish. 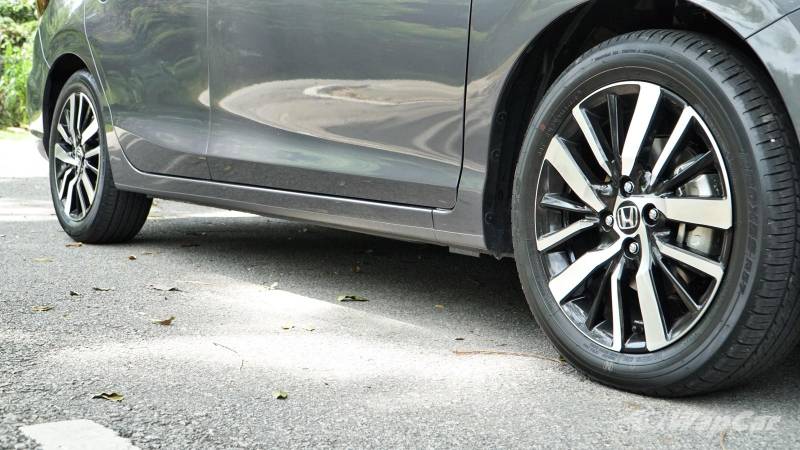 Round the sides, the RS is treated to high-gloss black side mirror caps, body-coloured door handles and dual-tone 16-inch wheels. 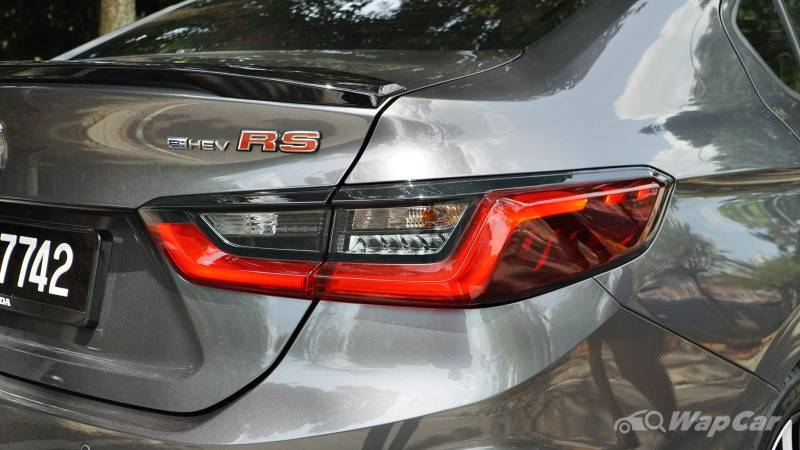 Round the back, the RS gets a subtle trunk spoiler finished in piano black and rear diffuser with the same carbon-look finish as the front.

Whilst the RS’ styling additions are hardly groundbreaking, the overall package does well to give the City RS a touch of exclusivity over other variants in the City range. 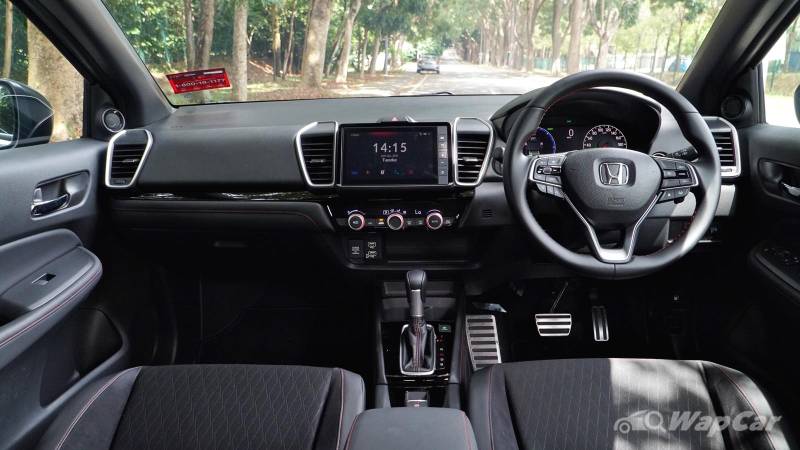 On the inside, the most noticeable change to the City RS is the half leather upholstery replete with red stitching on the seats and steering wheel. Personally, I believe the interior is superb. 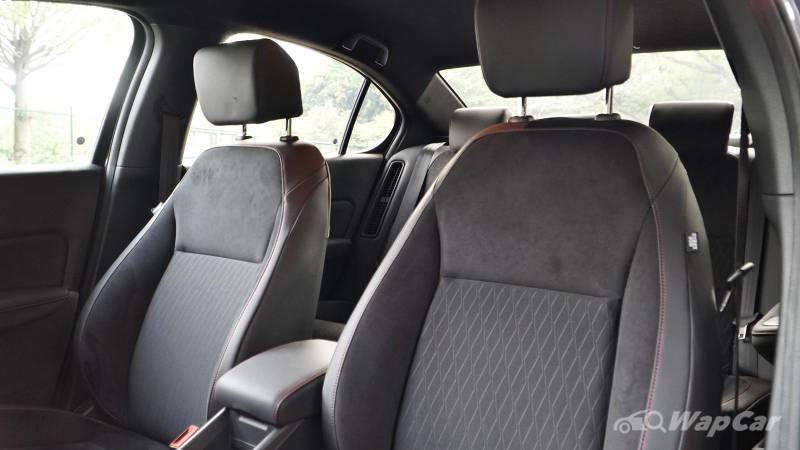 From the texture of the materials to the execution of colours and contrasts, the interior really evokes a sense of occasion when getting inside. Further down, the City RS features ‘Sport’ pedals that are functional and look good too. 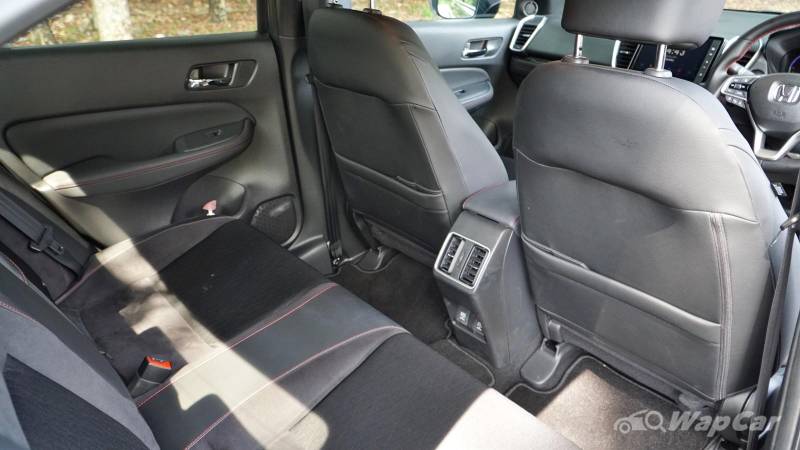 As for the rest of the interior, being the undisputed leader in space and packaging, it's hard to fault the City RS. The seats are nice and supportive, and the overall occupant space on offer will have you questioning why you would ever need a bigger sedan than a Honda City. 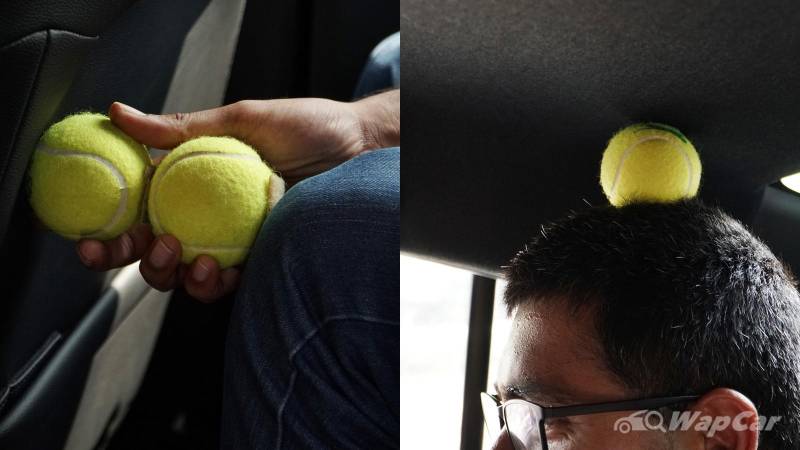 Measuring in at 180 cm tall, there is still two tennis balls of kneeroom for yours truly and one tennis ball of headroom at the rear of the City RS. 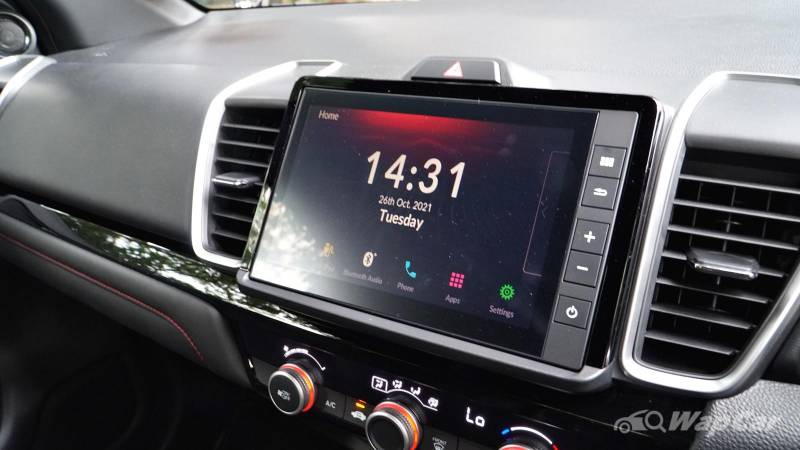 Perhaps the most noticeable improvement is the infotainment system; not only does the new unit offer a larger 8-inch unit with both Android Auto and Apple Carplay smartphone integration, there’s a sense of quality in the execution, unlike the previous generation's 6.8-inch unit which looked like an aftermarket add on.

Driving Experience – Power and economy redefined for the B-Segment

Understanding how a City RS drives requires some understanding of just how the powertrain works. 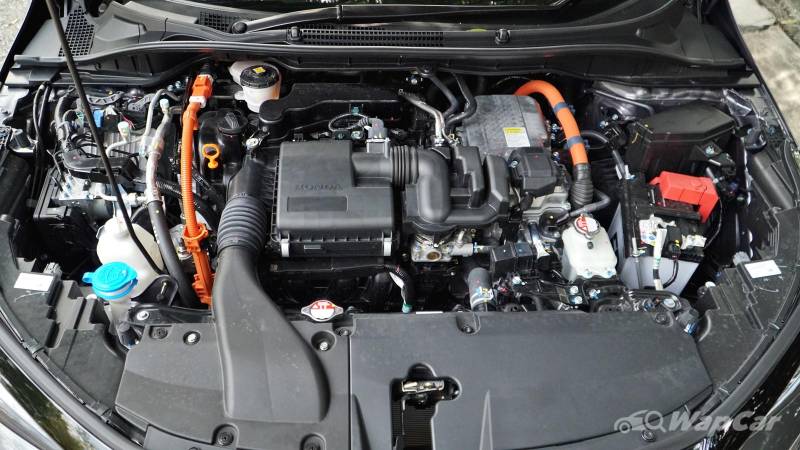 The City RS is a two-motor full-hybrid system – to simplify that – the 1.5-litre DOHC i-VTEC naturally aspirated combustion engine is aided by two electric motors (as opposed to one in other hybrids).

The first motor is called the traction motor (this one drives the wheels and also works as a generator) and another generator motor (let’s call this a support motor).

The traction motor produces 109 PS and 253 Nm of torque. It also doubles as a generator, reversing the flow of current when the car is coasting or braking, to charge the lithium-ion traction battery at the rear.

The generator does not drive the wheels – it is merely spun by the engine, to provide additional power to the battery and traction motor. 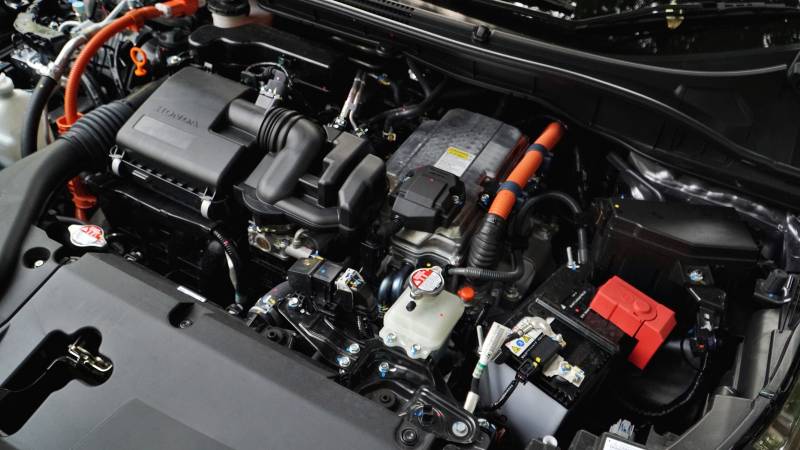 By disconnecting the engine from the wheels, the engine isn’t subjected to typical driving loads such as when you need to go up a hill or accelerate and thus operated at its most optimal state depending on the powertrain’s needs.

Here is where Honda’s i-MMD system achieves even more efficiency, and crucially offers more power than other hybrids.

The engine can still drive the wheels when a clutch is engaged, but this mostly happens at higher speeds when it’s more efficient to simply connect the engine to the wheels instead going through the motors.

Therefore, to answer the burning question –  does the City RS have 253 Nm on tap at all times to overtake Toyota Camrys at a whim – absolutely, because the traction motor can instantly provide power with virtually no lag whenever it’s called upon.

Driving the City RS feels much the same as the 1.5-litre City. Depending on the state of charge of the lithium-ion battery, the engine will be called on intermittently to power the generator to supplement the drivetrain’s needs. 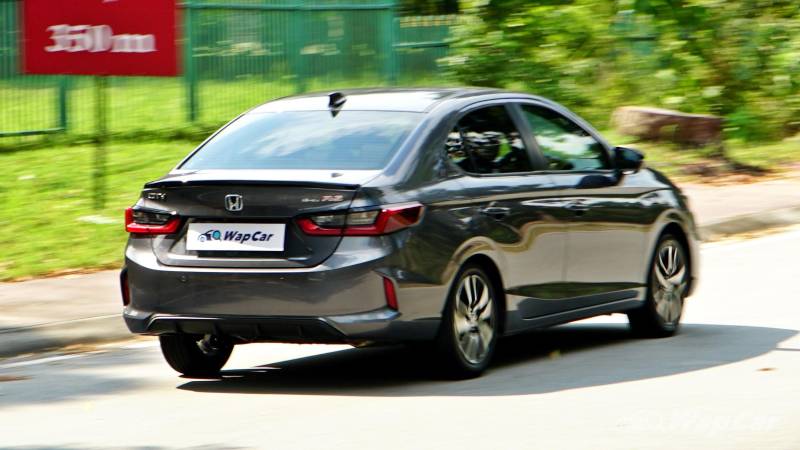 There is, however, a certain disconnect because we subconsciously associate the engine with forward motion (even in other hybrids) but this just is not the case with the City RS.

One also has to get used to the engine whirring away (seemingly at high speeds) when the car is stationary at a traffic light. 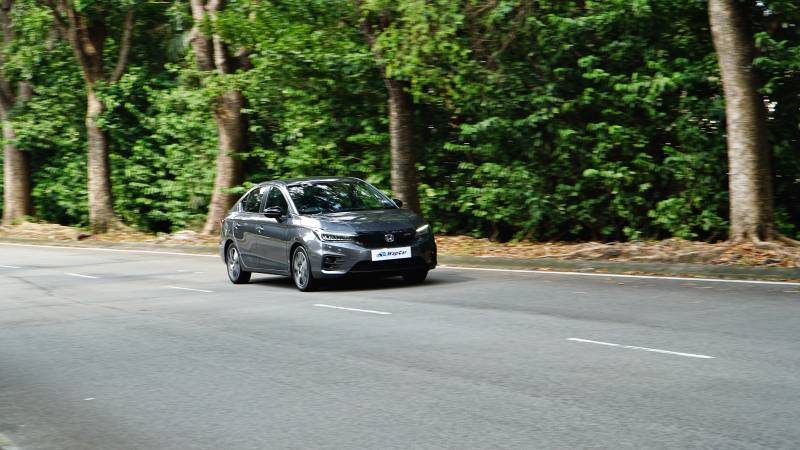 That aside, power delivery is smooth and seamless at virtually any speed. Once on the move, engine noise is almost unnoticeable as the powertrain cycles through its various drive modes.

Press the accelerator harder though and the City RS will pick up speed rather quickly. 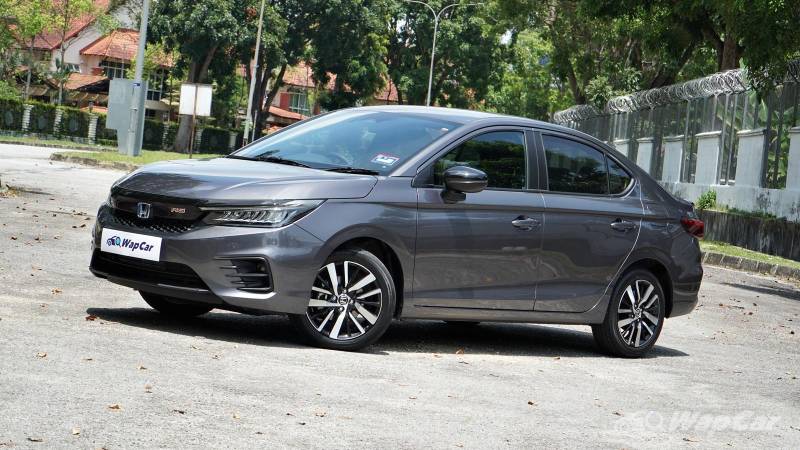 The City RS is especially strong up to speeds of 150km/h, after which, power gradually tapers off. The City RS will keep accelerating past 180 km/h if given a clear road, but the sweetspot is around 130 km/h for a fast cruise.

It’s much the same on the brakes, the City RS is mighty on the brakes, generating in excess of 0.8g while stopping during our 0-100-0 acceleration tests.

As for acceleration, the City RS completed the 0-100 km/h sprint in 10.2 seconds in our tests (not far off from the claimed 9.9 seconds). 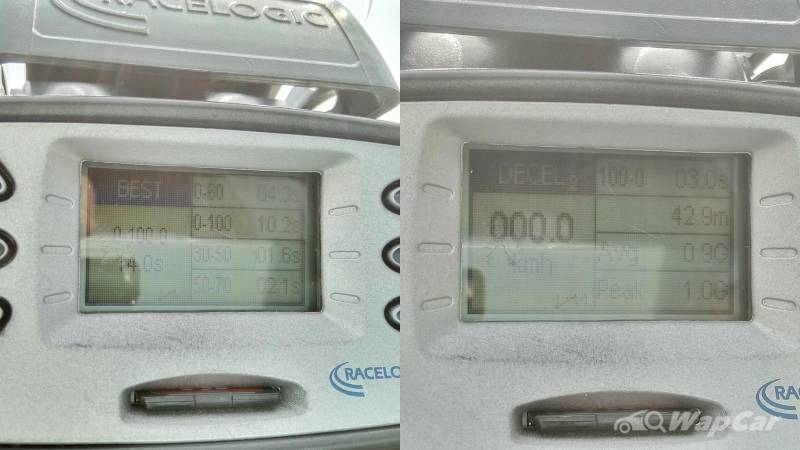 Wind the City RS through a complex of corners and you’d be pretty impressed with how it handles. From the driver’s seat, it feels more surefooted and balanced than the 1.5-litre engine models, perhaps due to the battery’s weight positioned close to the rear axle.

The City RS will not win any prizes for driving engagement, but there’s reasonably good feedback from the steering wheel, and the overall body rigidity and grip levels allow it to hold a steady line through a corner, and come out with surefootedness. 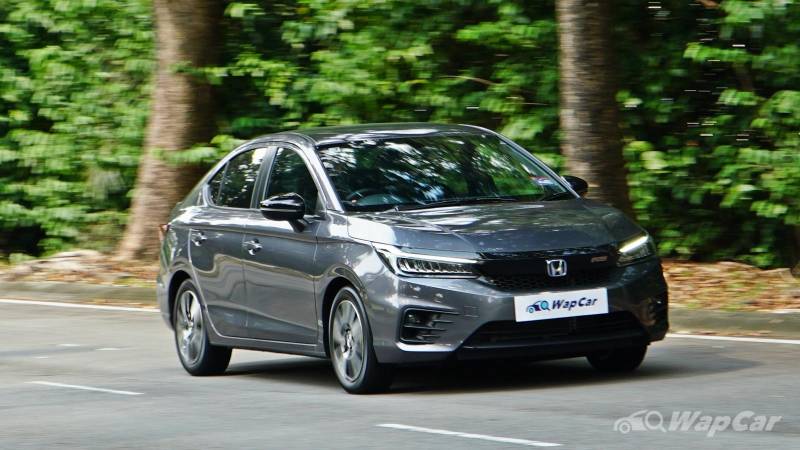 The City RS, like its petrol-powered siblings, is attuned for comfort and composure; if you were looking for sharper handling and dynamism, you might be better off with the Mazda 2 sedan or Nissan Almera.

Ride comfort – Refinement and quietness comparable to a D-Segment sedan

The City RS excels in its overall refinement and quietness levels. Perhaps the most noticeable difference is the overall quietness when driven in full electric mode. 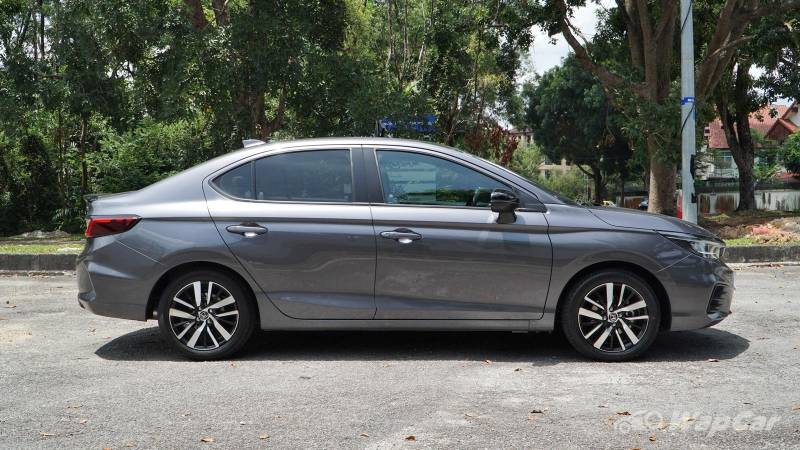 While stationary or at low speeds, you will hear the engine wind up to recharge the battery, but once you get moving at mid-to-highway speeds, this fades unnoticeably into the background.

To give you some context, those numbers are comparable to the Honda Accord according to our tests.

And it feels it when you sit inside given the City RS' relaxed driving demeanour. 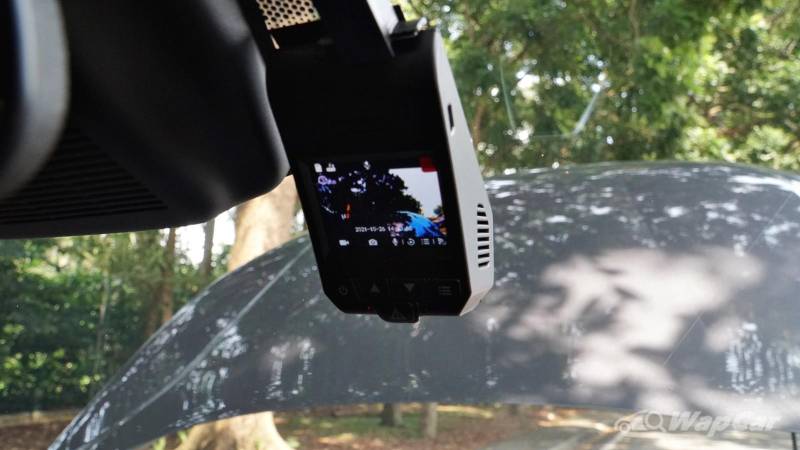 Whilst yes, the Accord is better overall, the City offers a sense of composure that makes you feel like you’re in a larger car than it is, which makes it superb for the daily grind on the rough and rugged roads of Malaysia. 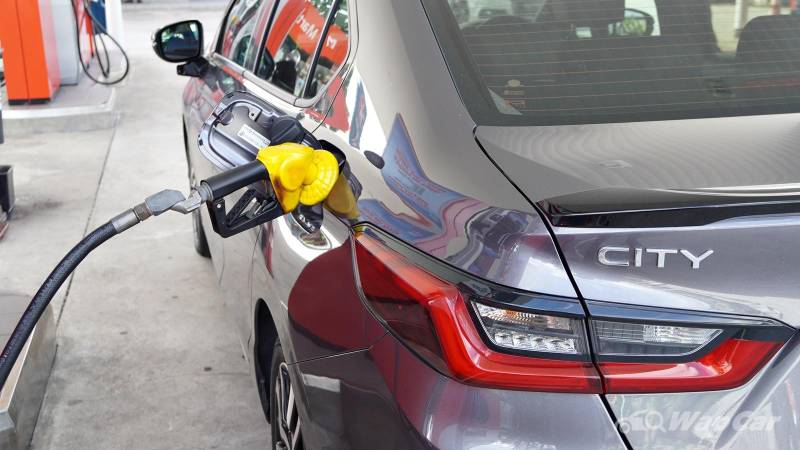 After a journey of 125 km broken down to about 40% highway and 60% city driving, it required 6.51 litres of fuel to brim the tank. This translates to a calculated fuel consumption of 5.2 litres/100 km. 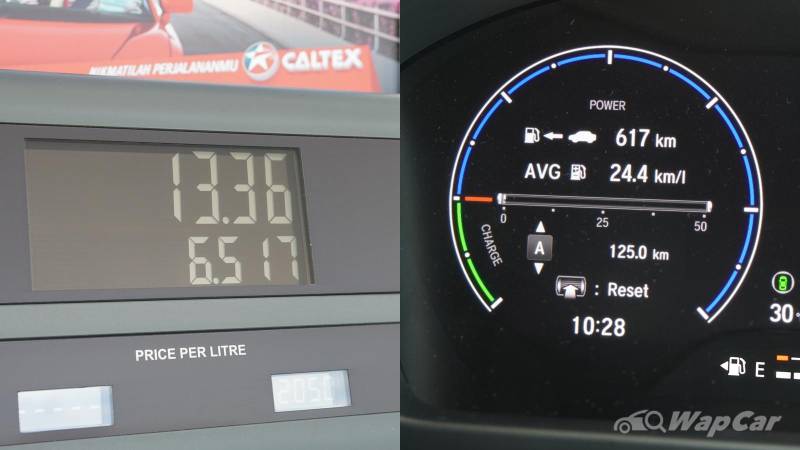 As a caveat, it must be said that given the driving conditions and weather were not particularly kind to the City RS.

Having conducted our typical driving tests beforehand and driven around in torrential downpour afterwards, those numbers are skewed slightly. 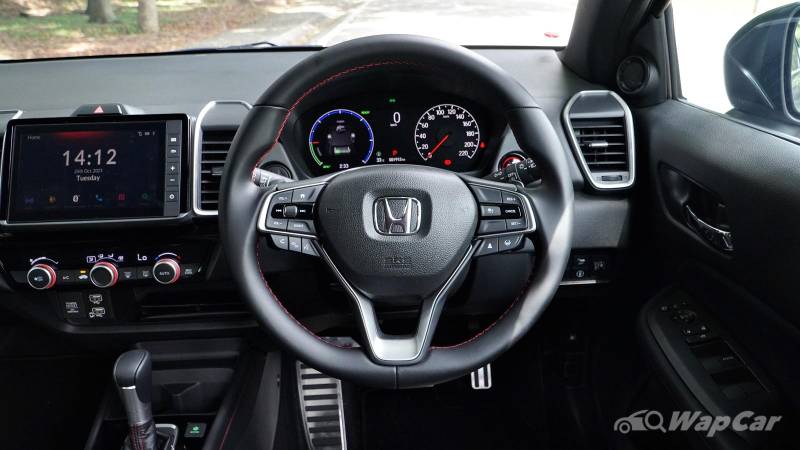 As a saving grace, a fellow colleague, which separately drove a City RS claimed a fuel economy of 4.2 litres/100km over a total distance of over 1,000 km.

This tes proved much closer to the Honda's claimed combined fuel economy of 3.6-litres/100km.

This is because highway driving recharges the lithium-ion battery even quicker than when driving in the city and thus more mileage can be extracted from the i-MMD powertrain. 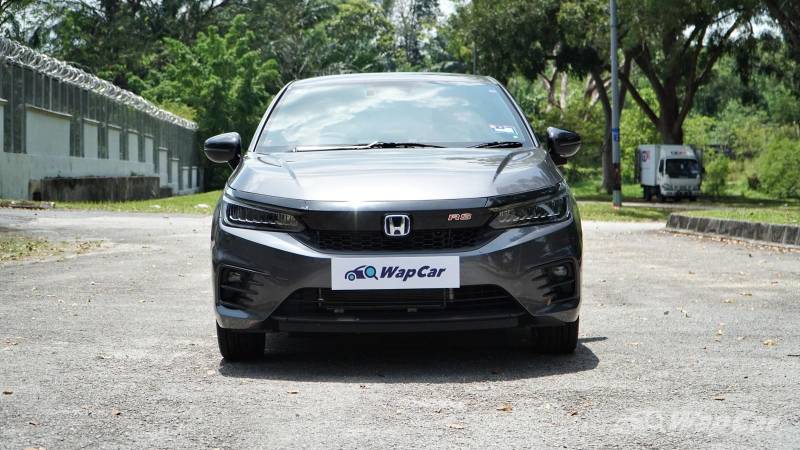 It’s easy to get lost in the argument when considering the City RS’ pricetag. Yes, at RM 106k, it is just RM 3k less than an entry-level Civic 1.8S, and it is expensive when you consider the framework of it just being a B-Segment sedan. 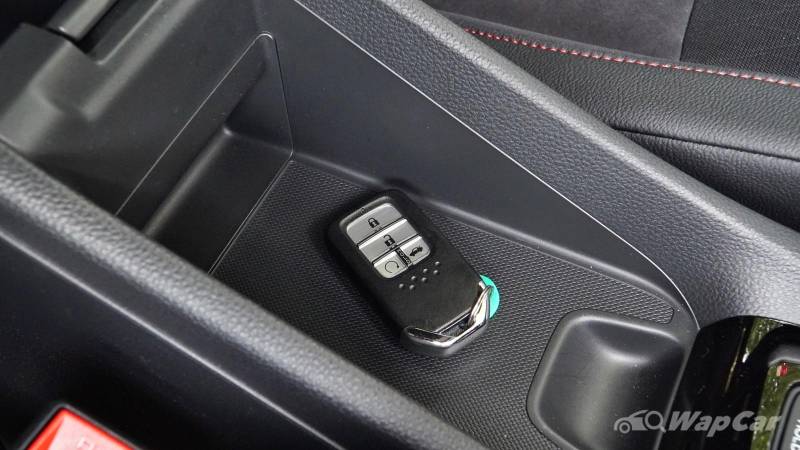 However, when you consider that it is the most advanced hybrid powertrain on sale, not to mention, the safest car in its segment thanks to the Honda Sensing suite of ADAS systems – then it starts to make sense.

Using the City as the basis to package the Honda i-MMD powertrain was the best strategy to keep costs low and offer buyers cutting-edge technology at a relatively affordable price. 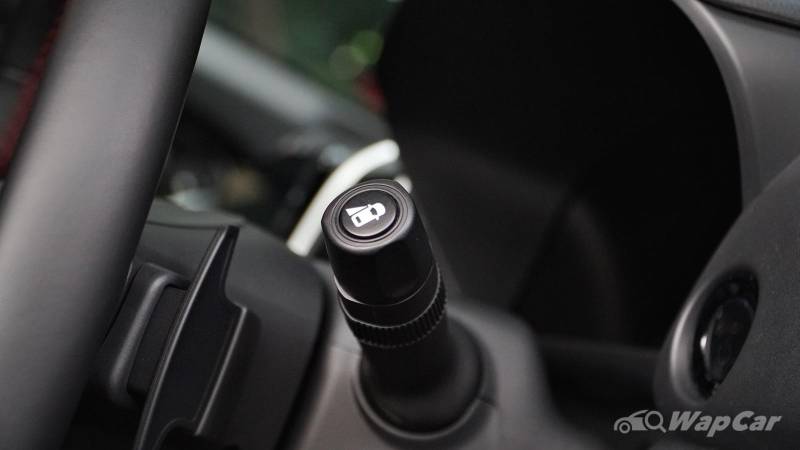 The next cheapest option if you’re specifically looking around for a full hybrid is the Toyota Corolla Cross Hybrid which retails for approximately RM 137k (note, the Nissan Serena S-Hybrid is a micro-hybrid).

Even then, the Corolla Cross Hybrid features a single-motor hybrid powertrain that is unchanged from the Toyota Prius’ powertrain first introduced over a decade ago. 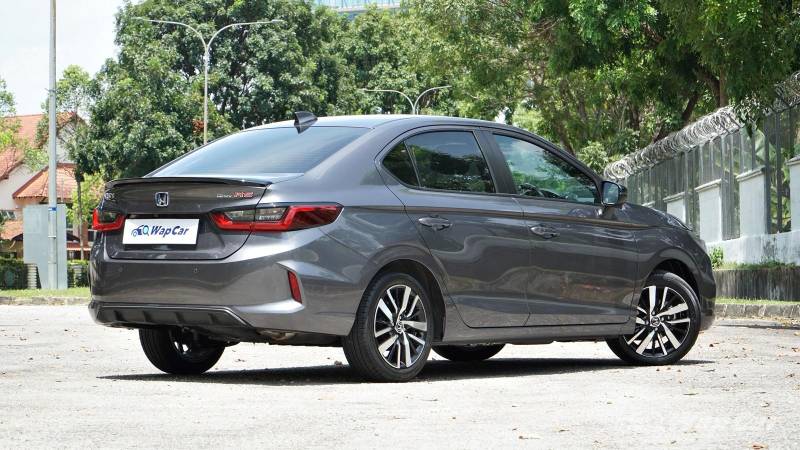 Therefore whilst it may not have a Ferrari-beating specific power output, the City RS is fundamentally offering hybrid performance and top-notch ADAS safety systems for the common man, in the same spirit of the Integra, all those years ago.