HomeNewsReview: 2022 Honda Civic FE – Forget baby Accord, it’s on par with the 3 Series 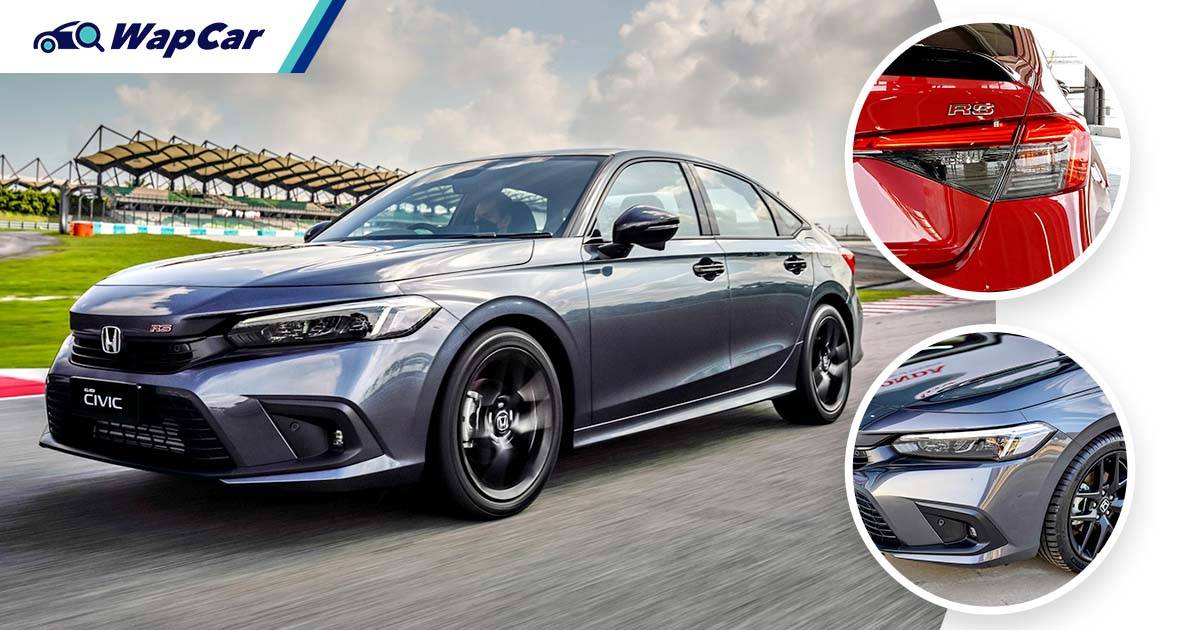 Put down whatever you’re doing because the all-new 2022 Honda Civic FE is finally here.

Well not quite, with the launch still weeks or maybe months away (it should be launched Q1 2022), WapCar were among the privileged few that have got first dibs on driving Honda’s new C-Segment sedan. 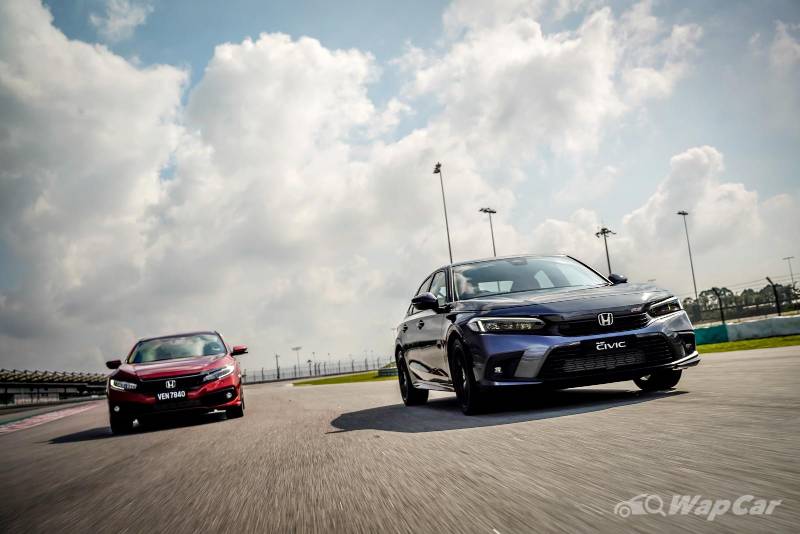 What’s new – Quite a lot actually

Starting with it’s size the new 2022 Civic FE is longer, wider, and lower than the Civic FC. The FE also boasts of a longer wheelbase, which improves occupant space and overall ride comfort and stability. 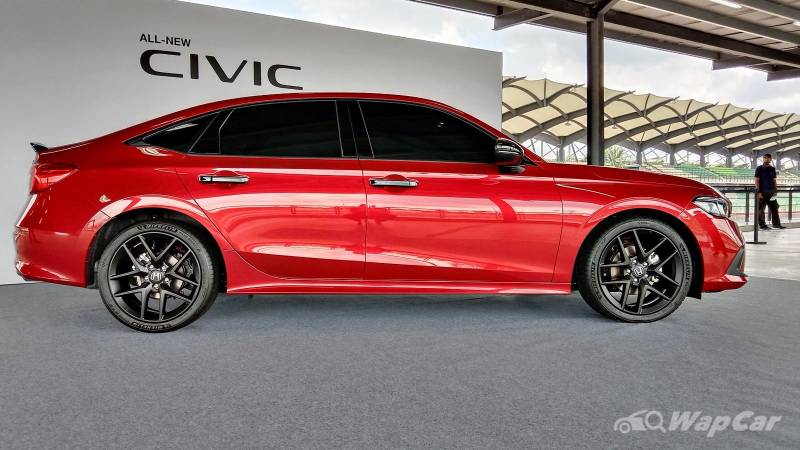 This is how the Civic FE compares to the FC:

As for the drivetrain, the 2022 Civic FE is powered by an updated version of the 1.5-litre turbocharged VTEC mill that outputs 182 PS and maximum torque of 240 Nm. 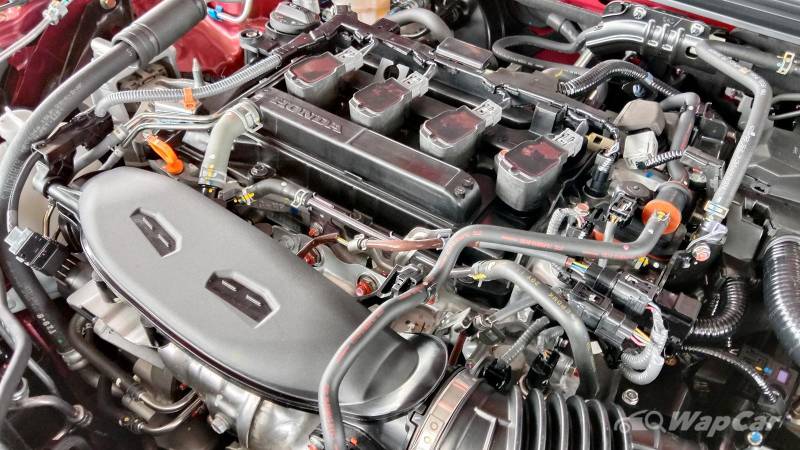 That represents a 9 PS and 20 Nm improvement over the current Civic FC, and approximately 4 PS more than the Civic FE supplied in Thailand and Indonesia (which output 178 PS).

Therefore, Malaysia gets the most powerful version of the Civic FE in the region.

As before the, the engine is paired with a CVT transmission which has been mapped for quicker response and drivability – but more on that in a minute. 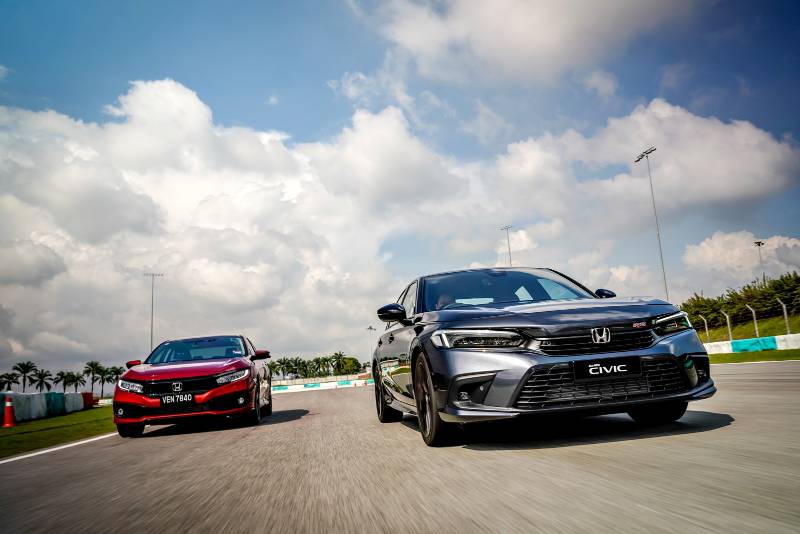 Honda Malaysia have been tight-lipped about the entry-level 1.8-litre i-VTEC but it will most likely be dicontinued, which means the Civic FE might not feature as a future PDRM patrol cars.

Another bit of news Honda Malaysia would like to keep a secret is the interior and its features, which will be revealed in full detail at the launch. 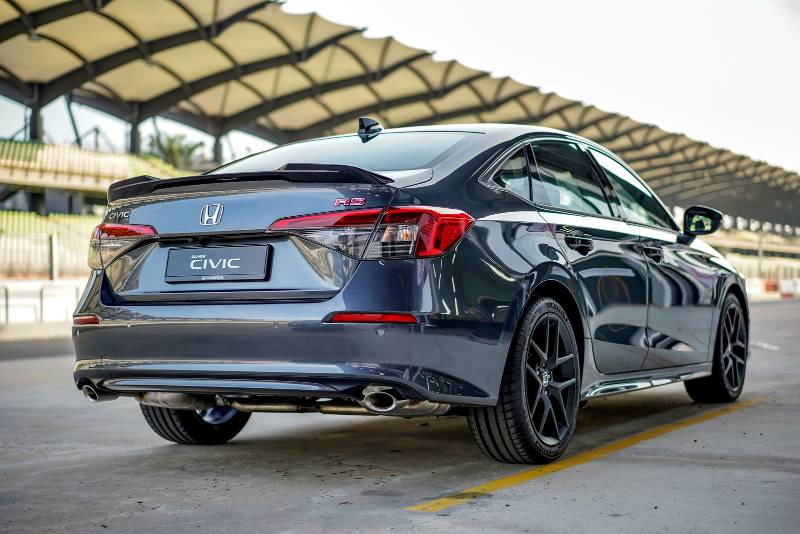 For now however, they have teased us with the highlight features of the range-topping Civic RS variant. The first of its kind to be offered for the Malaysian market.

But, unlike the City and City Hatchback RS which highlight hybrid technology, courtesy of their two-motor full-hybrid i-MMD powertrain, there is no hybrid powertrain for the Civic.

The following are the highlight features of the Civic RS variant: 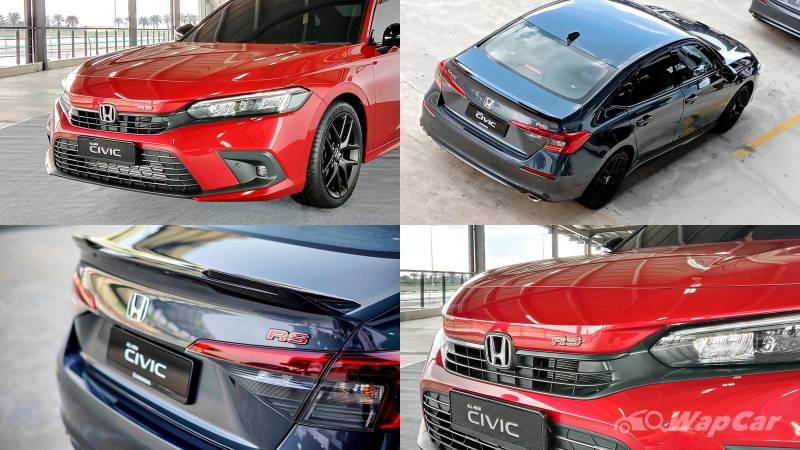 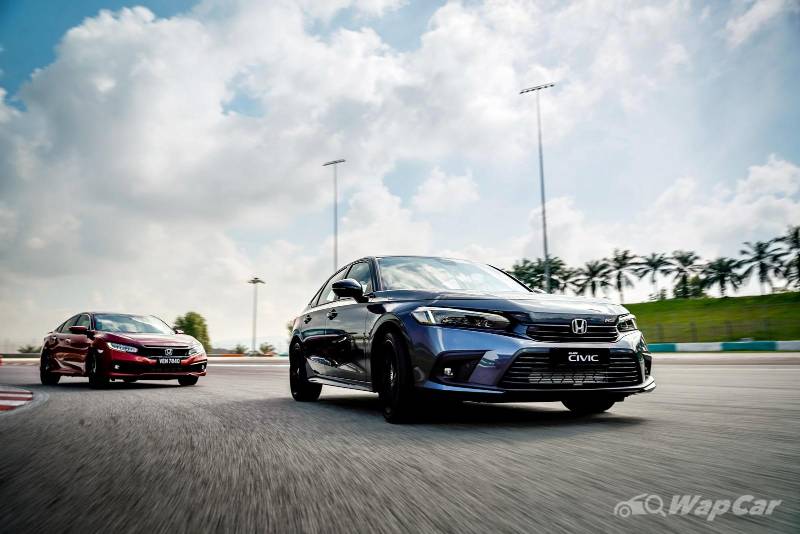 The Civic RS will also come with a updated suite of Honda Sensing ADAS features. Added to already-excellent Honda Sensing suite is Lead Car Departure Notification (LCDN) which basically alerts the driver when the car in front has moved ahead. 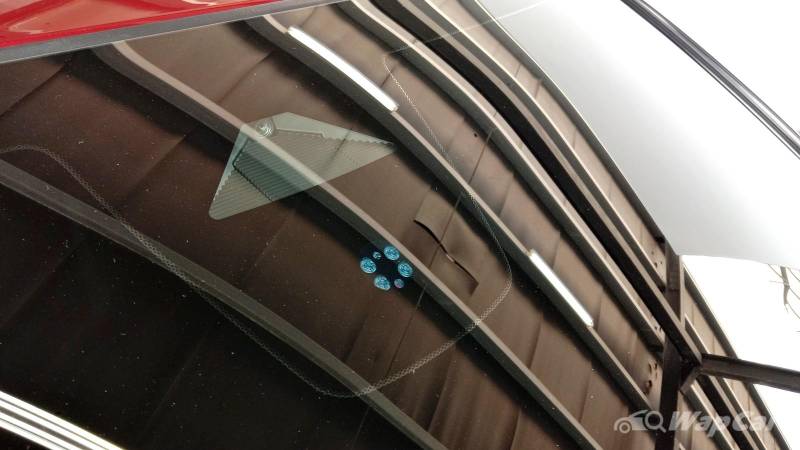 The improved overall performance of the Honda Sensing is attributed to a new, more powerful camera which offers a wider field-of-vision versus the unit featured in the Civic FC. The camera is also aided by a millimeter-wave radar system and the front proximity sensors. 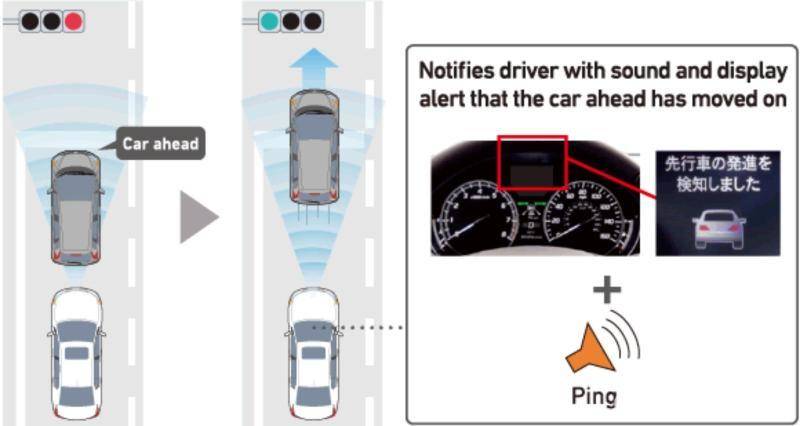 How does the FE Civic look in person? 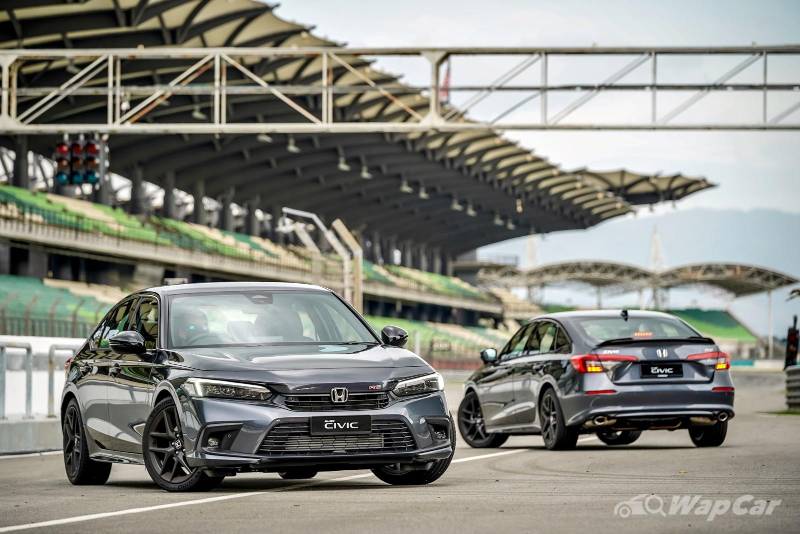 In a word, it’s handsome. Forget what you’ve read or been told about the Civic FE being boring – you must see it in person to appreciate its proportions and presence.

Yes, it isn’t as boyracer cool as the Civic FC, but it’s grown up… in a very good way. The Civic FC’s busy and angular front end is now more chiselled and purposeful. 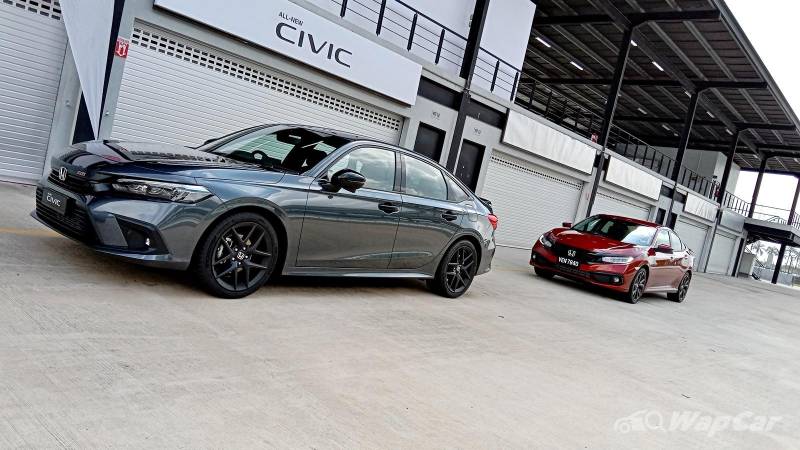 Along the flanks, the first thing that catches your eye is the strong shoulder line that runs from the front to the back. Matched very nicely, of course, by the matt-black 18-inch wheels.

Admittedly, the wheel finish might not be everyone, but personally, I believe it adds a sense of aggression that contrasts the understated design. 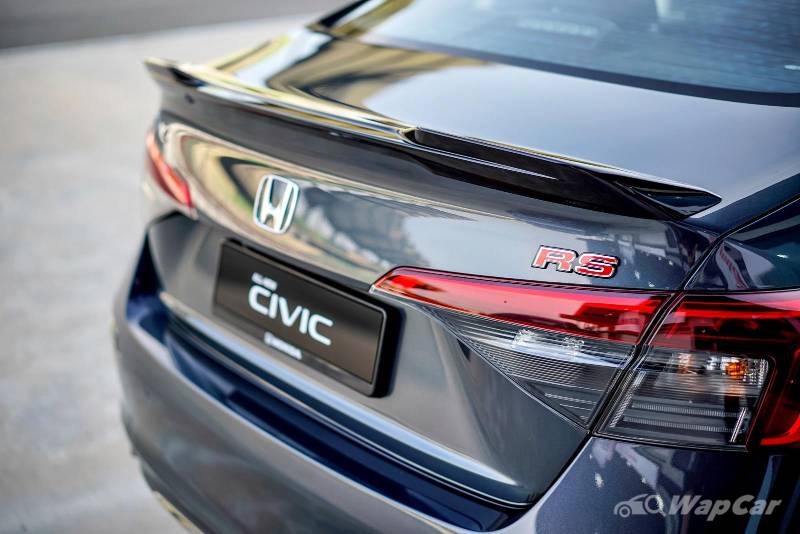 Round the back the Civic FE might seem more compact than the FC.

Given Honda have somewhat retained the fastback roof proportions but shifted the roofline towards the rear, the boot may also seem smaller than before.

With that said, the rear lights, with its sleek LED graphics look the business.

The the Civic FE is best likened to modern Audis, which exude premium sportiness without being overly stylized.

How does it feel on the inside? 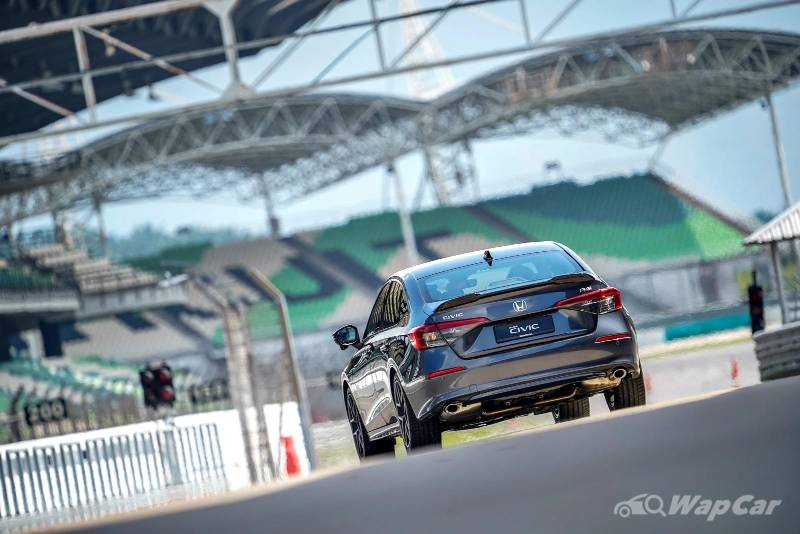 Whilst we cannot reveal much about the interior, we can tell you that the seating and driving position at the front is damn near spot-on, i.e.: the steering wheel and pedals are very easy to get used to, and the overall visibility is much improved over the Civic FC.

It’s much the same with the rear – the rear seat bolstering considerably more supportive, whilst entry and egress has been made easier thanks to slight tweaks in the rear seat design.

The overall quality on the interior, as well as the tactility of the various switchgear are also considerably better than before.

As with any other Honda, the Civic isn’t short of cubby holes for storing your drinks, and various other knick-knacks for a long trip.

How does it drive – composed and very cohesive 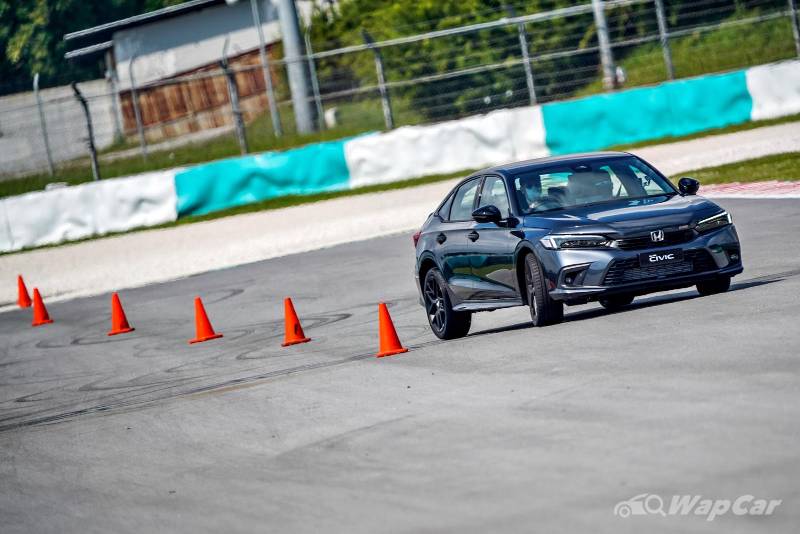 Though seat time was limited, we still managed to put the 2022 Civic FE through its paces on the South Track of Sepang, and compare notes against the previous-generation FC Civic as well as its closest competitor, the Toyota Corolla Altis, for good measure.

First up was the Toyota Corolla Altis – off the bat, and being unbiased, the Corolla Altis feels very planted and easy to get used to. The driving position is good, the brakes are easy to modulate, and overall body control is adequate courtesy of the Corolla’s TNGA platform. 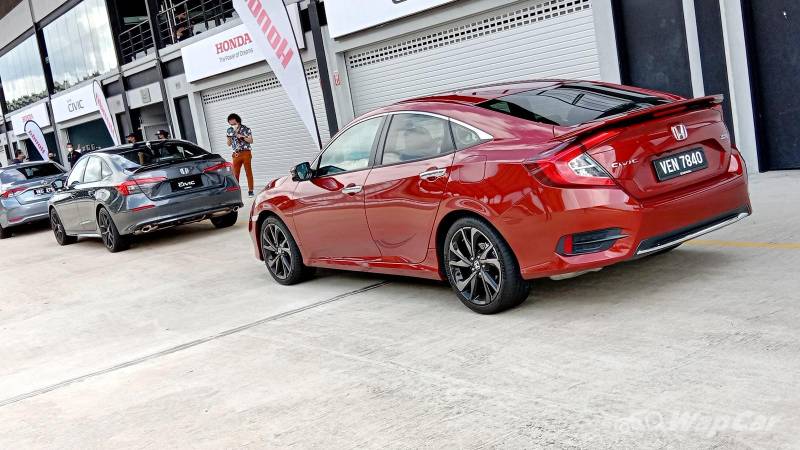 Though you get a sense, the drivetrain doesn’t really want to be driven hard. Push the ‘go’ pedal to the floor, and the CVT starts to groan loudly, body roll also becomes more pronounced in the corners. With just 139 PS and 172 Nm, it simply isn’t as quick as the Civic, which is able to deploy more torque much earlier. 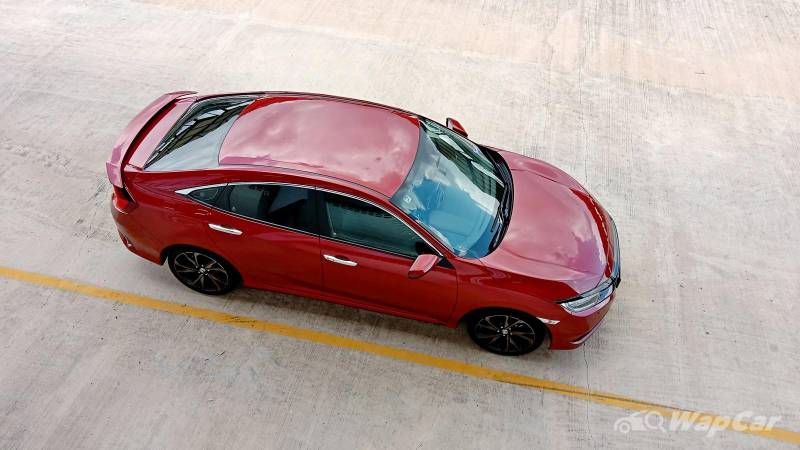 Jumping into the Civic FC, it still proves a decent steer, even on a track, after all these years. Power is adequate, and the chassis still feels nippy.

With that said, where the Civic FC starts to feel slightly out of depth is in the corners. With the rear end loaded up, the Civic FC tends to feel a bit clumsy when transitioning between corners, and when going onto the brakes. 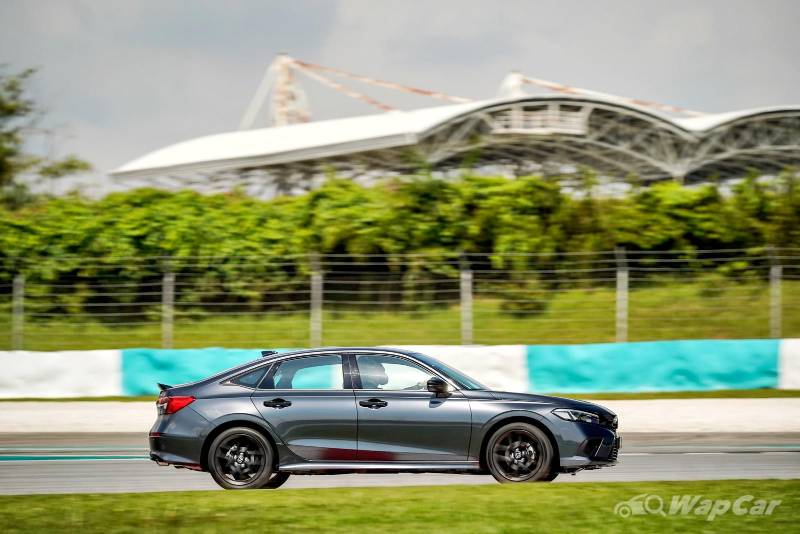 The steering weightage is too light as well, which makes it tad harder to hold a line through a corner.

Note, Honda Malaysia equipped all cars (even the Corolla Altis) with Michelin Pilot Sport 4 tyres (PS4), taking the tyre conundrum out of the equation.

Jumping into the Civic FE immediately after gives you a clear sense how well Honda has developed the new vehicle.

The first thing you notice is how well positioned you are within the cockpit, the next highlight is the steering weightage, which is far better calibrated, to offer a sense of fluidity when turning the steering wheel into a corner. 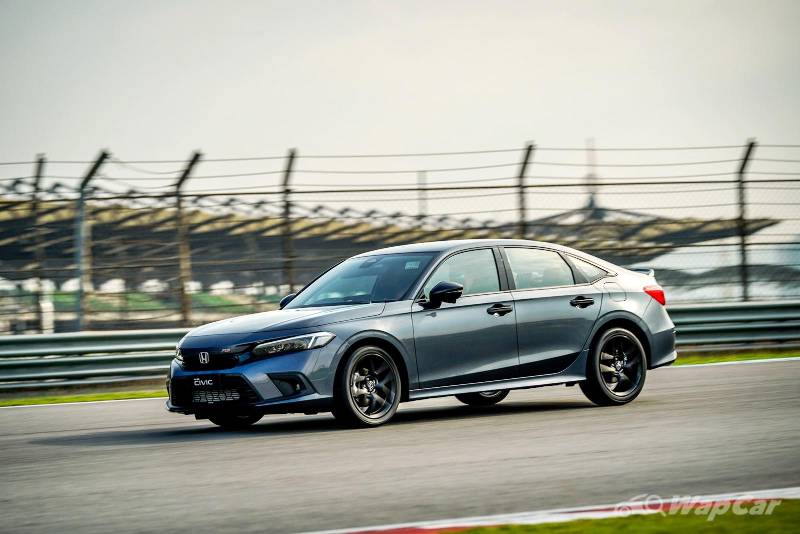 The brakes – though a bit on the light side, offers good feedback and quick response, which inspires confidence when you slow down for a corner.

Perhaps the biggest surprise is the powertrain – given that the hardware isn’t much different from before, the Civic FE feels much stronger at mid-to-high speeds than the Civic FC. 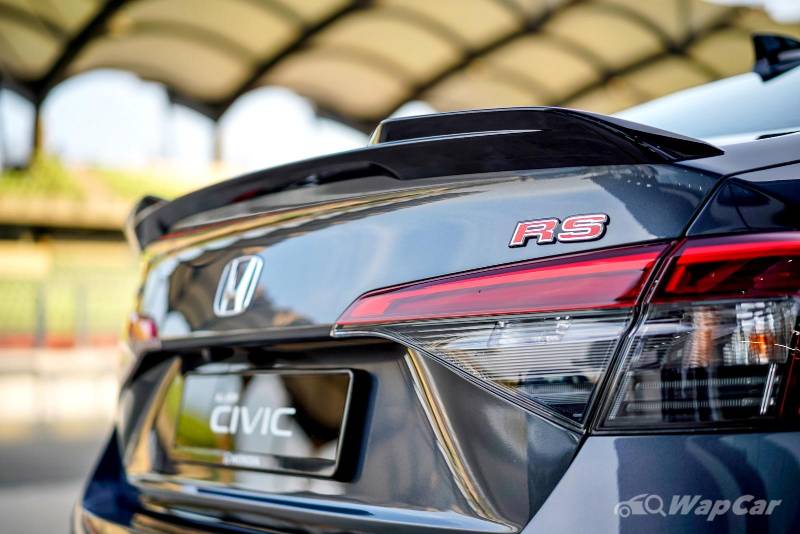 The additional 9 PS and 20 Nm feels like more in the real world than it does on paper. The Civic FE is especially stronger between the speeds of 60 km/h and 100 km/h, and it’ll keep accelerating smoothly well into three-figure speeds.

We had a chance to accelerate the FC and FE from a standing start, and whilst both of them are pretty much equal early on, as soon as you get closer towards 90 km/h mark, the Civic FE just walks away from the FC. Almost as if it has an additional gear to play with.

More so than the engine, the CVT transmission is perhaps the biggest improvement in the Civic FE. Though all we know for now is that’s it been remapped for better response and drivability, it has given the Civic FE a dose of agility that just isn’t there in the FC.

For the most part, the CVT is very intuitive in Eco and Normal modes, perfect for the daily grind, but when shifted into Sport mode, the CVT offers up quick, almost conventional auto type gearshifts. It doesn’t feel gimmicky either, dishing out a further sense of interaction between driver and car.

Though it’s easy to get caught up with talk of handling and dynamics. The key takeaway is that the Civic FE should prove far more composed, refined and powerful on the roads, whilst still offering a very lively driving experience – a cornerstone of any Civic model. 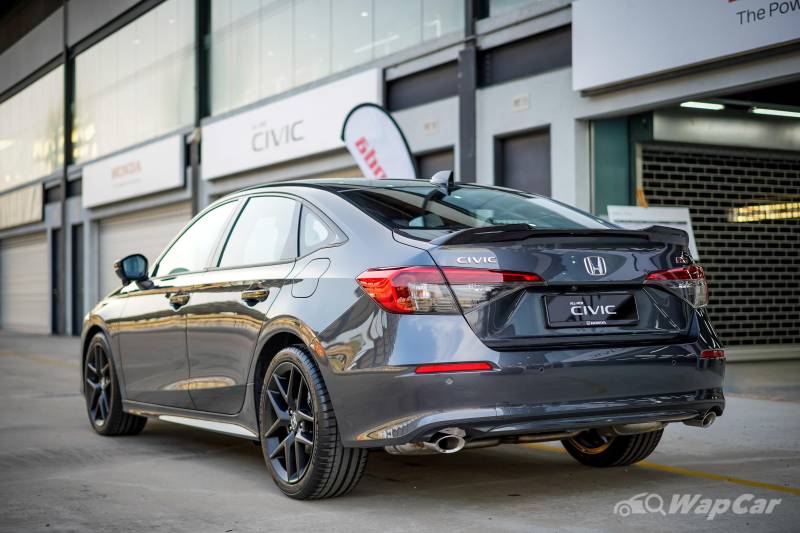 In much the same way as the design, the most impressive aspect of the Civic is the overall cohesiveness of the powertrain and chassis. It feels as though a multitude of components and attributes have come together exactly how it’s supposed to. 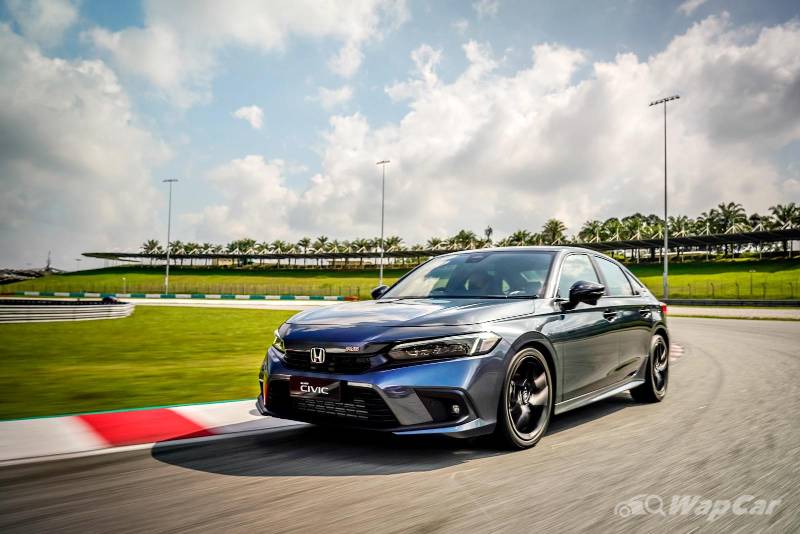 In many ways, the overall experience isn’t much different from driving a well-sorted European sedan like the BMW 320i – given the Civic’s balance, poise and surefootedness. In fact, after a while in the Civic FE, you might even question why you need the BMW at all.

The WapCar verdict – More than a worthy successor!

While some may lament the loss of the edgy character the Civic FC had, the FE is a giant step in the right direction. 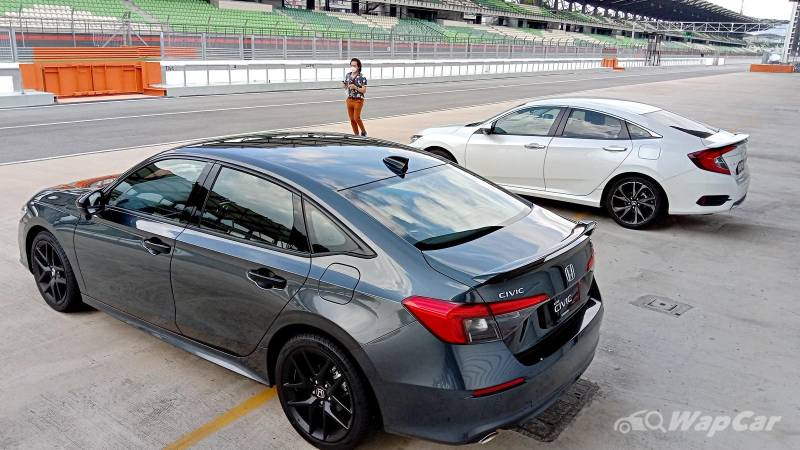 With the space formerly occupied by C-Segment sedans now flooded with SUVs, the Civic needs to shed its skin and evolve into a vehicle that not only drives well, but exudes classiness and presence - and the FE does just that. 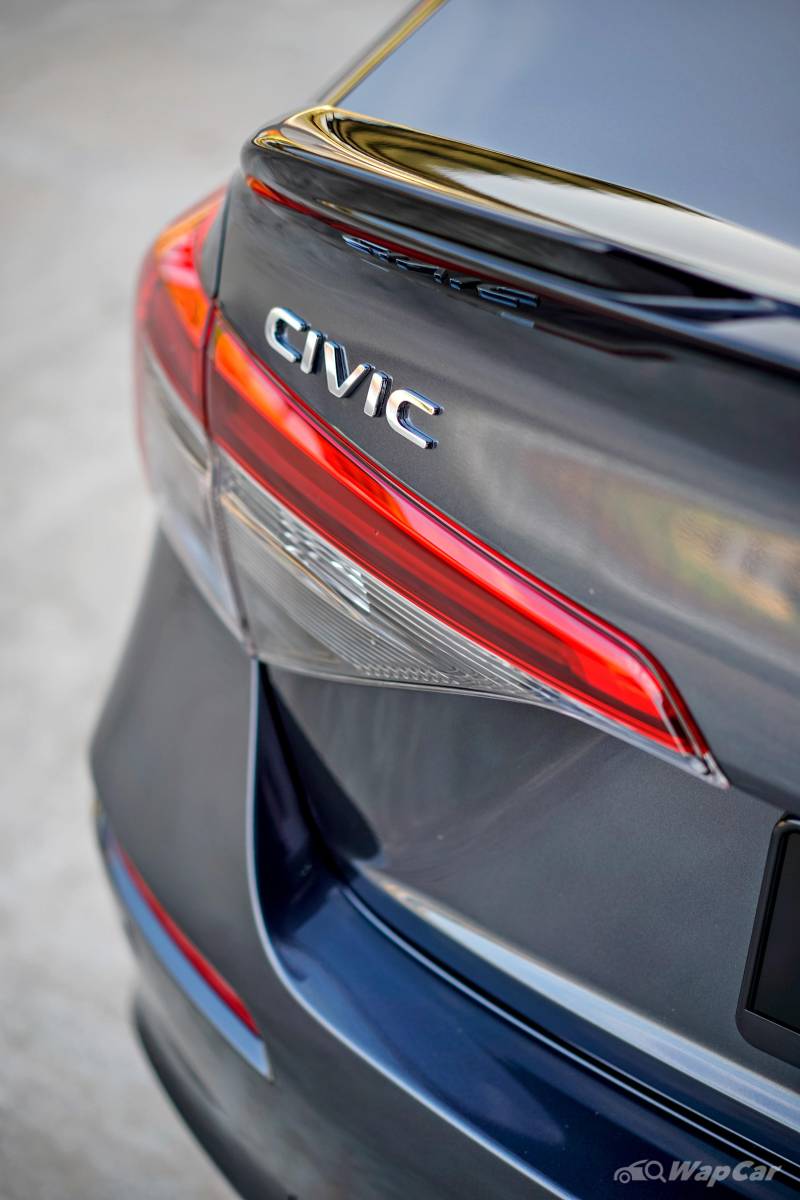 The videos below depict a Thailand market model. Local specifications may differ.