HomeNewsReview: 2022 Toyota Camry facelift - 'Top up a bit more' to get a 3 Series? Don't bother 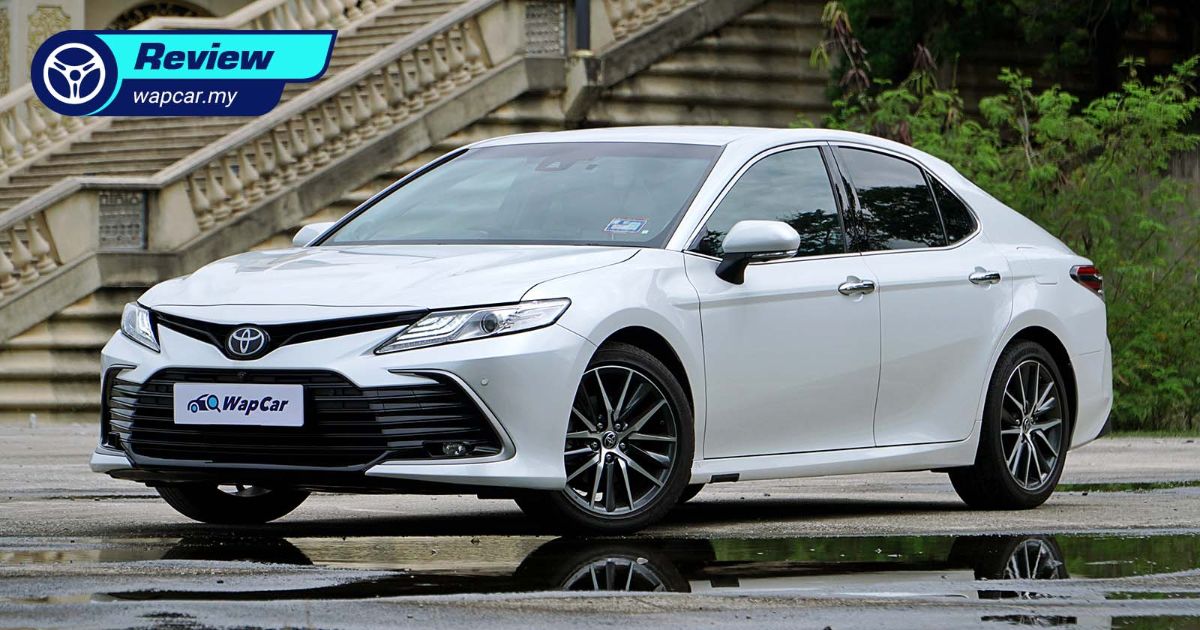 There’s a common phrase on social media – particularly on Malaysian automotive pages – “top up a bit more” and you can get so-and-so. The 2022 Toyota Camry facelift is now priced at RM 209,800 post-SST exemption. For around RM 30k more, you can buy a BMW 3 Series. 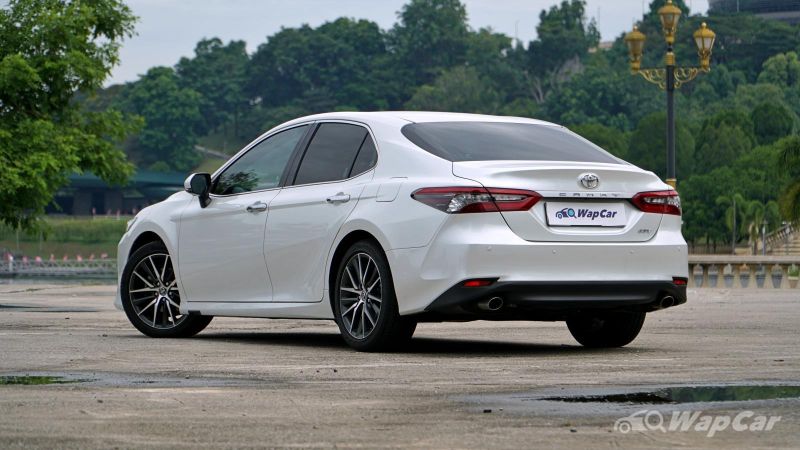 A BMW badge is tempting, isn’t it? Well, let’s quench that temptation. There is the law of diminishing returns which applies to practically everything. Google defines it as smaller returns from something as more money is invested.

In the case of car buying, the point at which the diminishing returns starts is right about where the Toyota Camry is. Spend more from this point and you’ll get proportionately less in return.

There are, of course, exceptions with locally-assembled hybrids or electric vehicles (EV) with tax incentives, but level the playing field and this theory holds. And we’ll get into that after we talk about our main topic here - Toyota Camry facelift.

Exterior – Facelift? Only connoisseurs can tell 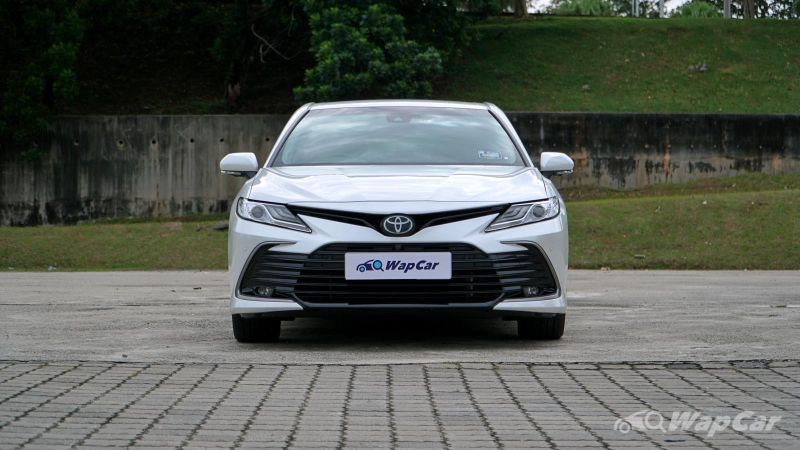 Let’s start with the subjective topic of design. Personally, this writer is of the opinion that the current XV70-generation Toyota Camry is quite a looker, with strong shoulder lines and aggressive front fascia.

This facelift exercise did little to change that, and many have glanced over it as the pre-facelift model. Not exactly a criticism, merely an observation. 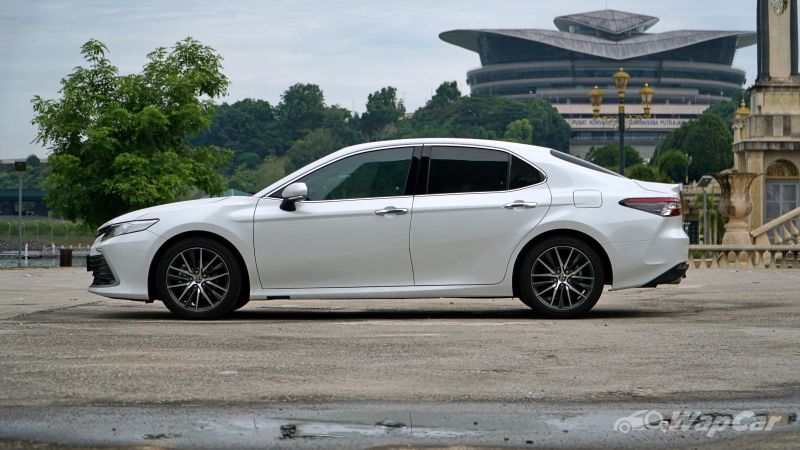 The front-end is perhaps the easiest way to tell if it’s the facelift. The air intake on the front bumper is more sculptured and there are C-shaped trim pieces on the edges. Apart from that, the two-tone 18-inch wheels are also a tell-tale sign. 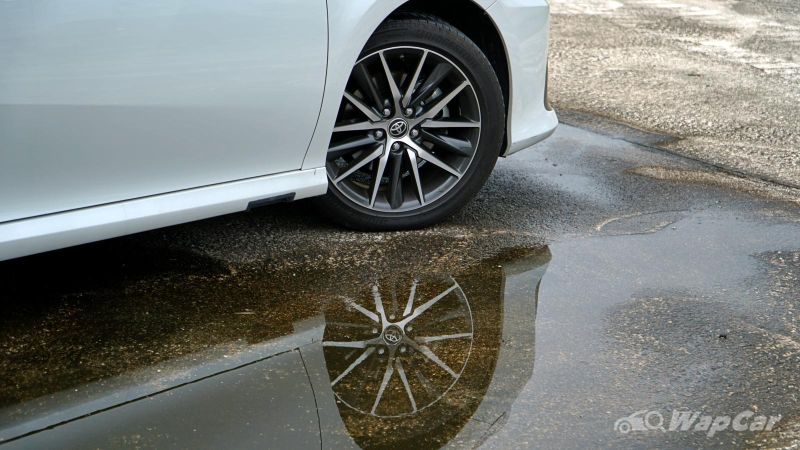 Over the rear, the differences are so subtle that it will probably require a side-by-side comparison with the pre-facelift model to notice the slightly darkened taillamps, almost as if it’s wearing an eyeliner. 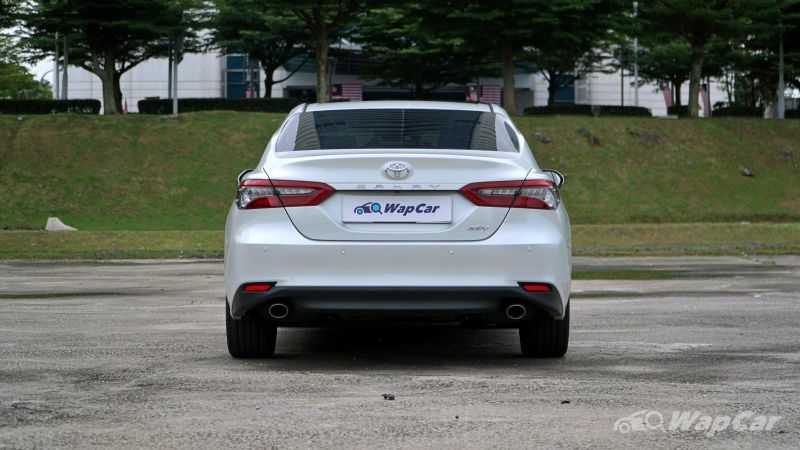 And finally, there is keyless entry function on the front passenger door – a much-needed addition. The rest of the car remains identical to before. The cut-outs on the side skirts for the puddle lights are still an eyesore, but a solution would be to pick a darker colour, like black. 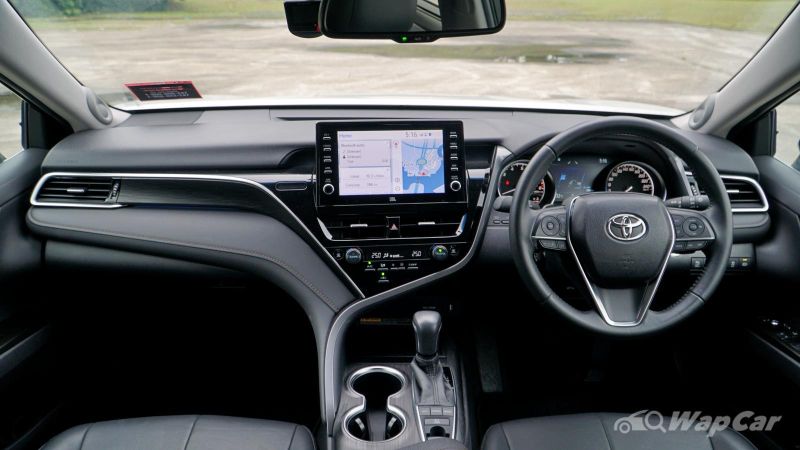 One of the highlights of the updated interior is the floating-style infotainment display. It’s a larger 9-inch screen and supports Apple CarPlay and Android Auto connectivity, addressing one of the drawbacks of the pre-facelift model. 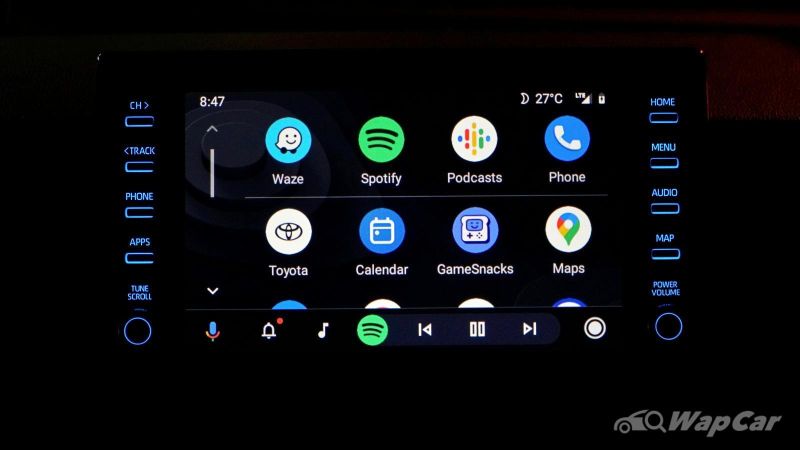 However, the infotainment system tends to lag upon extended usage. And it’s a severe lag, think several seconds before it responds to touches. Songs that are playing on Spotify may also seem to be buffering but no, it’s the lag. Hopefully software updates are able to remedy this. At least the JBL sound system is still a blast to listen to when cranked up. 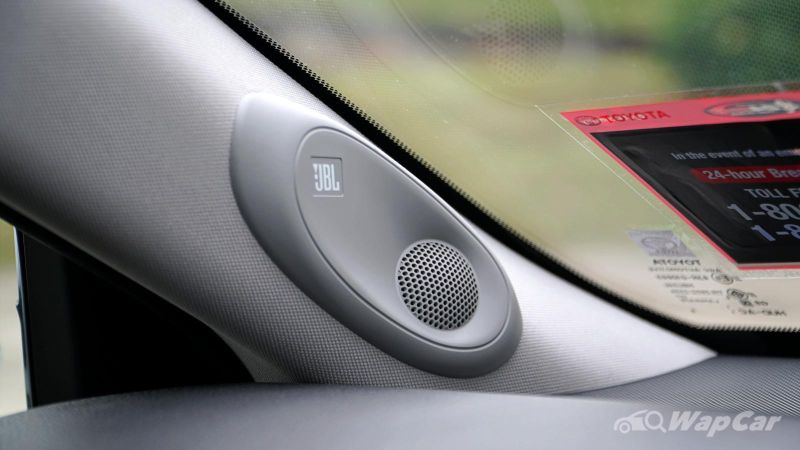 Also, the floating-style display itself looks like an afterthought. Perhaps it’s too costly for a new dashboard mould, so now there is a cavity behind the screen where the air vents used to be. Not particularly pleasing to the eye, is it? 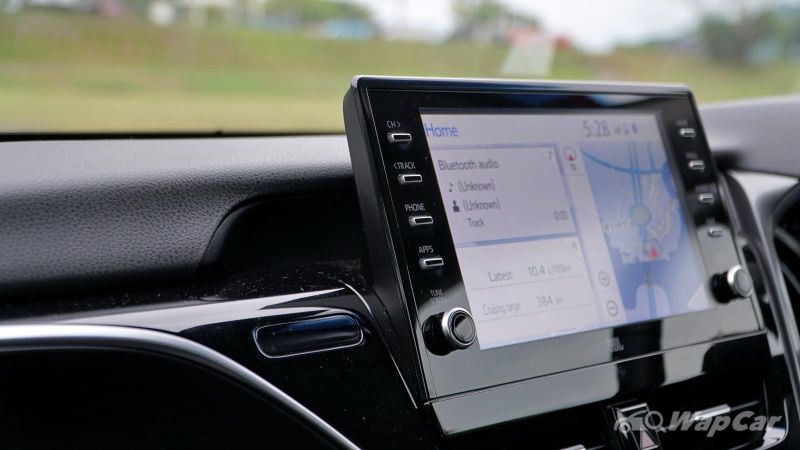 Odd decisions are carried over, like the button location for the memory seat function. They’re placed north of the side mirror controls, which is a bit of a stretch and there’s no illumination in the dark. The other odd decision is the instrument-cluster-operated sunshade instead of a physical button. 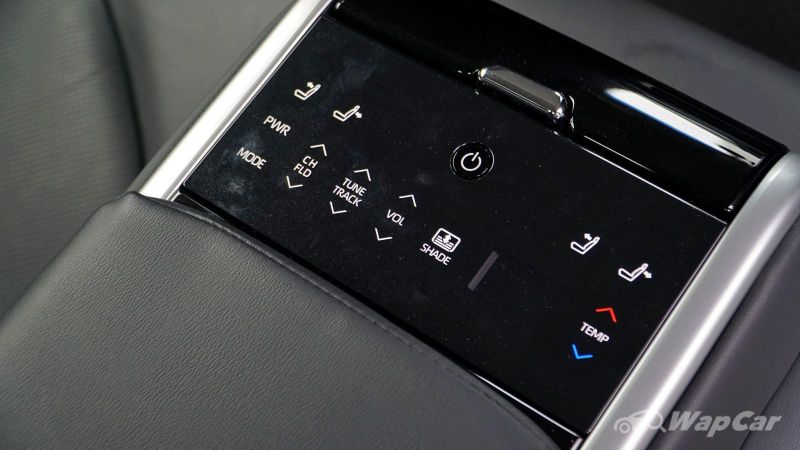 Having said that, rear passengers can now operate the sunshade via the control panel on the centre armrest. With this, the rear seats can recline by up to 32 degrees and it’s quite a noticeable difference. It feels like upgrading to business class, exactly how a Camry should feel.

Driving Experience – Best of both worlds 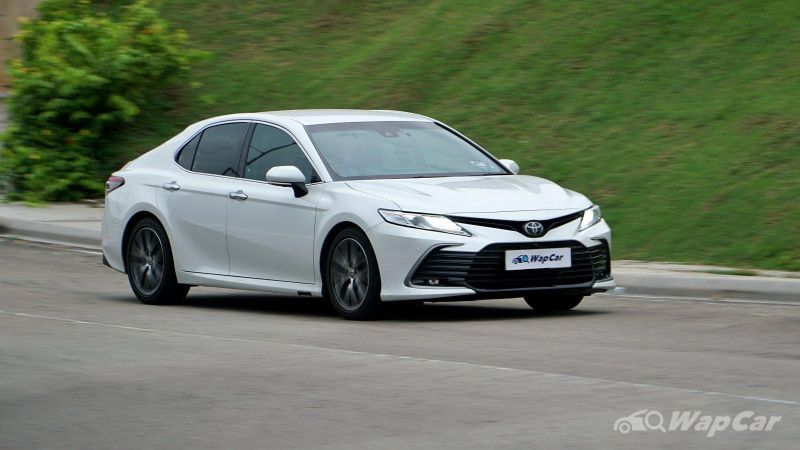 The Toyota Camry is proof that great driving cars needn’t sacrifice comfort in pursuit of handling. It’s not often a car pleases the passengers as well as the driver.

Now, the Camry is by no means dynamically superior to the BMW 3 Series because at the end of the day, it’s still a front-wheel drive car. But for what it is, Toyota has injected the Camry with a character that will put a smile on keen drivers’ face. 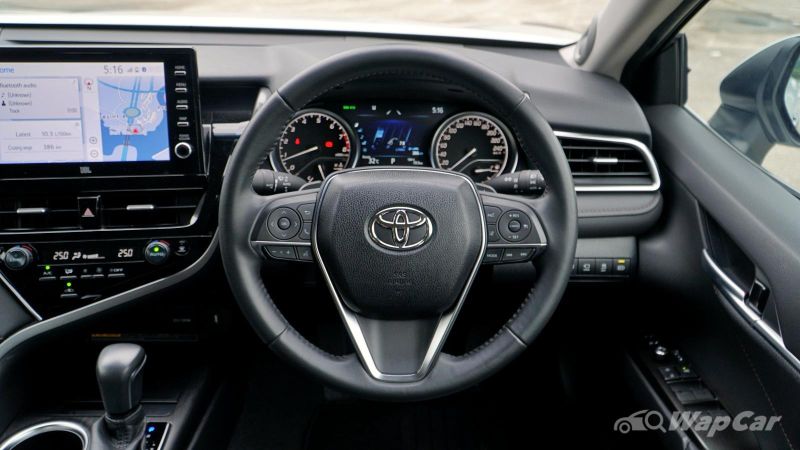 What sort of character? Well, it’s a combination of many things that gel together in such a cohesive package. For starters, the calibration and weight of the driving controls.

Steering is nicely weighted and feels wonderfully organic as it loads up around the bends. Throttle response is absolute perfection in normal mode, which actually negates the need for sport mode. It gives you the exact amount of acceleration as requested by your right foot.

Compared to its premium cousin, the Lexus ES 250, the same 2.5-litre Dynamic Force in the Camry feels more athletic. It’s keener to get going at an increased pace while the Lexus prefers to cruise in a more leisurely fashion. It’s also more vocal in the Camry that makes it more engaging, but not to the point of being loud. 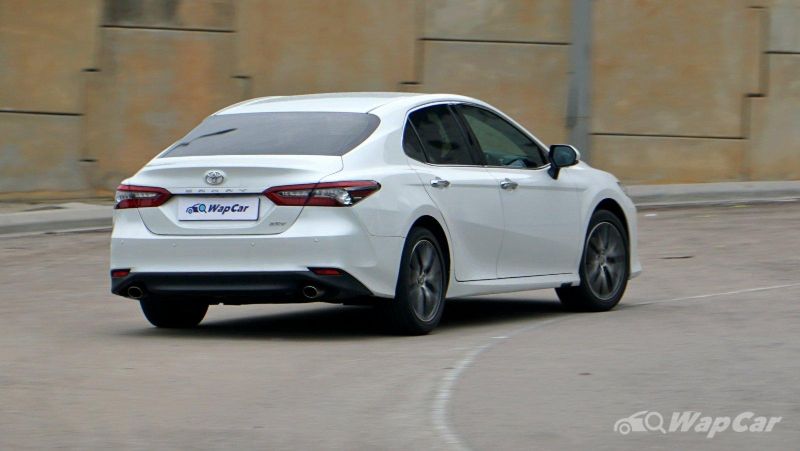 Shifts on the 8-speed automatic transmission aren’t the quickest of slushboxes but they’re smooth and mostly imperceptible in daily driving. Its shift mapping is intuitive and hasn’t been caught out in any situation. 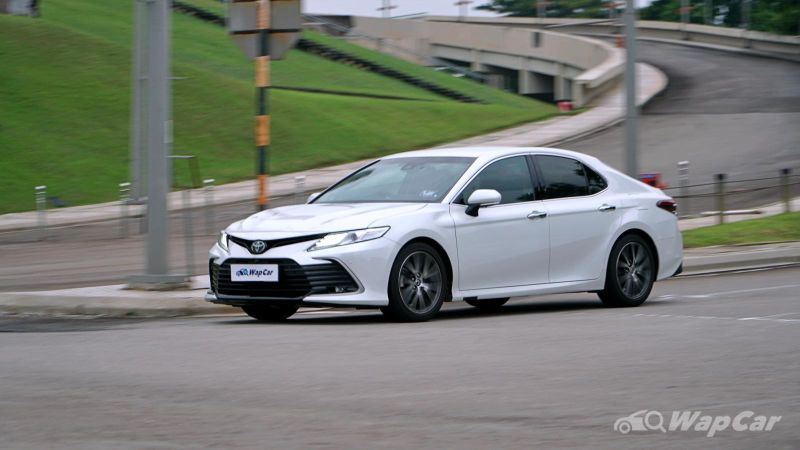 In the twisty bits, the Camry continues to shine as it exemplifies the TNGA magic. Turn the steering and the chassis responds in a synchronised manner.

It rolls communicatively without being excessive, yaws as the rear helps tuck into the intended line, and just gives feedback the driver needs to confidently tackle a set of corners.

Ride Comfort – This is the benchmark 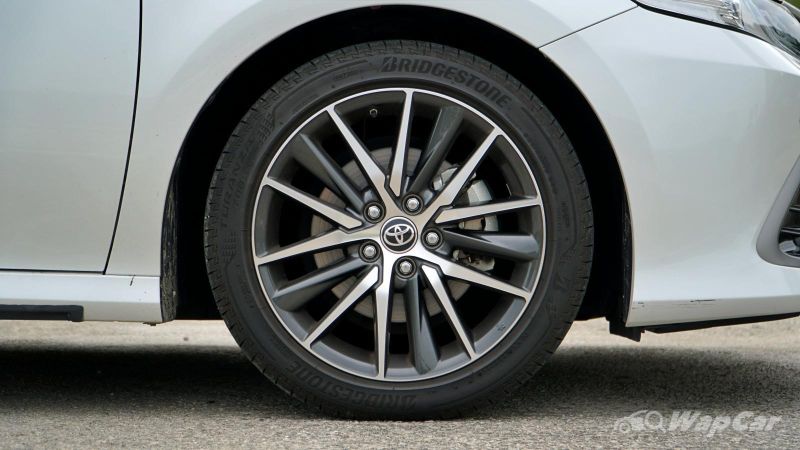 In terms of ride quality, the Toyota Camry is unbeatable at this price point. The ability to deal with road imperfections with such poise and fluidity whilst offering the body control it has questions the need for adaptive suspensions.

Across any surfaces, the Toyota Camry filters out the worst and gives only the necessary information to the occupants, particularly the driver. 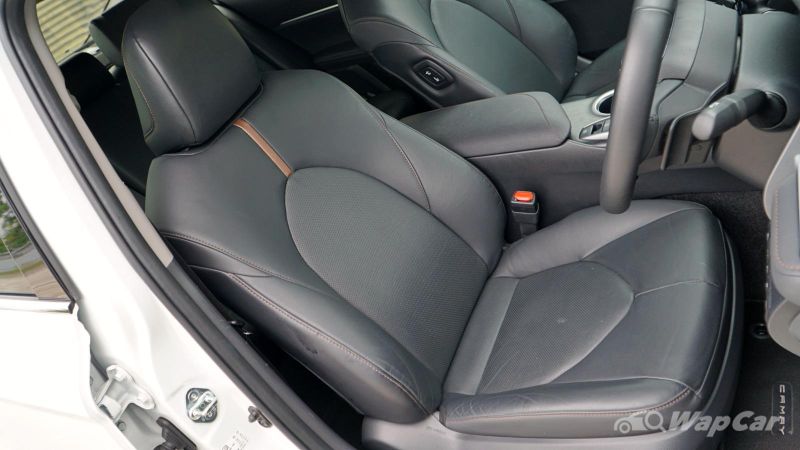 As for seat comfort, it’s also one of the best out there. It’s plush and has no pressure points on any part of the back. However, some may prefer a more cosy or hugging sculpture as this feels closer to an armchair. Some may also prefer a lower driving position, such as yours truly. 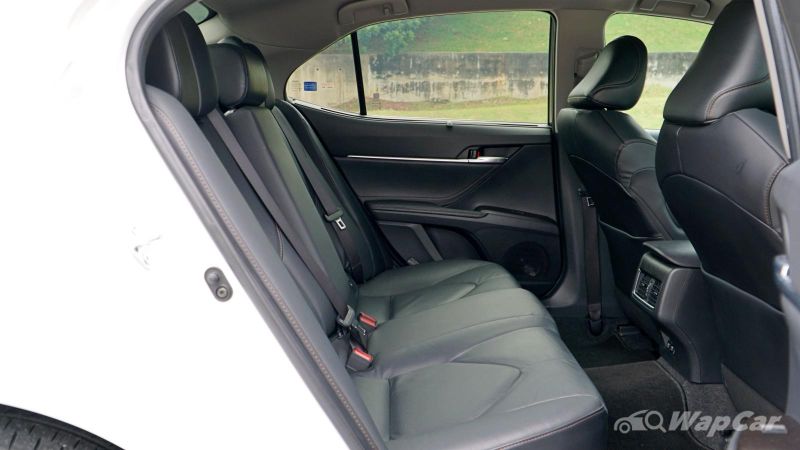 The rear seats are, as mentioned earlier, business class with its reclining function to give a relaxing posture. Combine that with the plush seat paddings, the Camry is the perfect companion for long distance journeys. 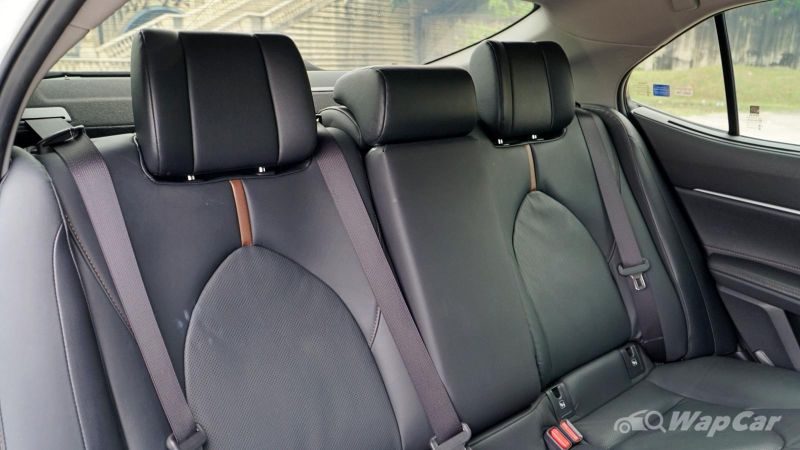 Cabin noise level feels similar to pre-facelift model. Tyre noise is well-suppressed and the new 2.5-litre Dynamic Force engine hums far in the background at a cruise, but there is noticeable wind buffeting noise around the A-pillar at our national speed limit. 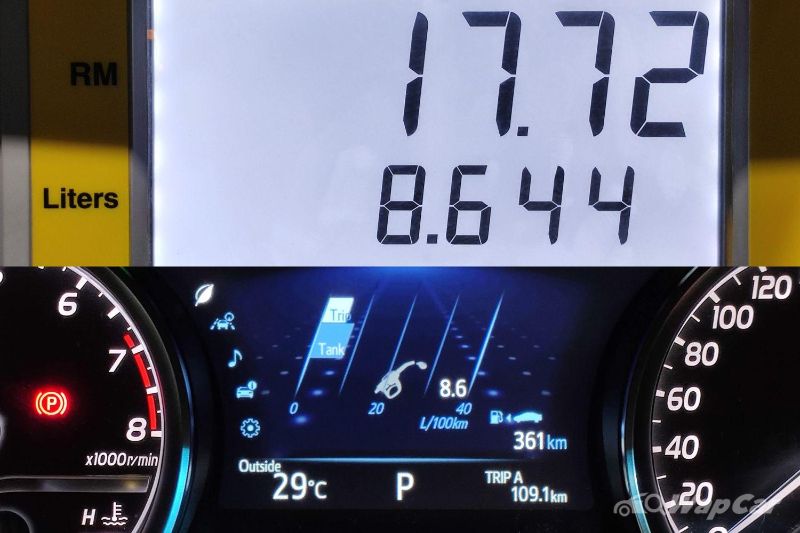 Just like the Lexus ES 250, the 2022 Toyota Camry facelift returned a fuel consumption figure of 7.9-litre/100 km with an equal split of city and highway driving. The trip computer displayed an average of 8.6-litre/100 km, which is rather conservative. 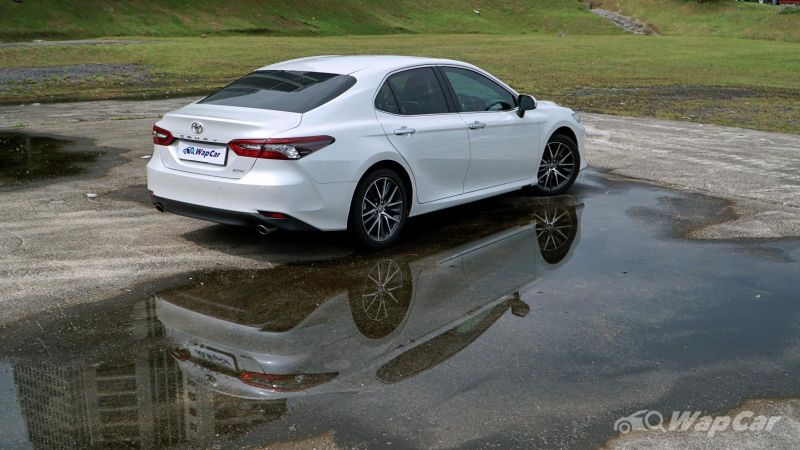 Back to the topic of diminishing returns. If you were to up your budget and buy a compact executive sedan like say, the BMW 3 Series, you’ll get the the badge and a balanced rear-wheel-drive chassis. But you’d be sacrificing space, comfort, and advanced safety features like adaptive cruise control (ACC). Even the range-topping M340i does without ACC. 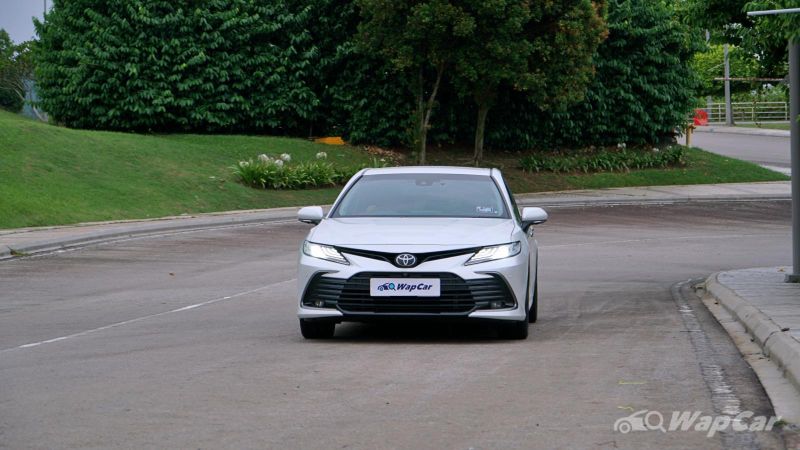 It’s the same story with a Mercedes-Benz C-Class. While the W206 C-Class is a whole lot more comfortable than before, the seats aren’t quite up to scratch and it also doesn’t have ACC. 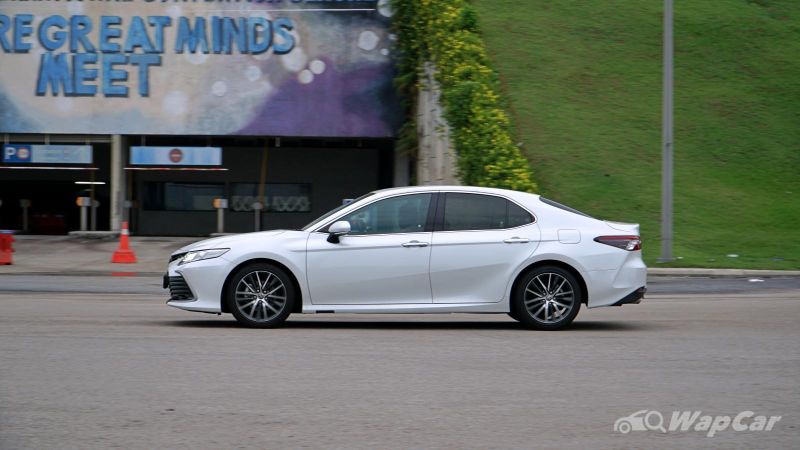 To get similar space and features, you’d have to pay nearly double for an equivalent-spec 5 Series or an E-Class, and even then, the executive sedans aren’t quite as comfortable. If you’ve sat in the rear any of the German execs, you’d know that the seats rather firm and upright. 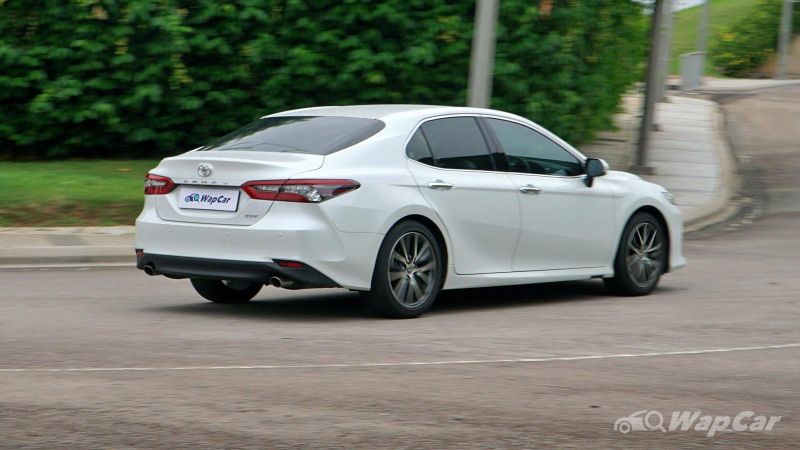 Sure, the materials are more upmarket and the interiors are nicer overall, but are those worth nearly as much as another car? That’s the law of diminishing returns. The Toyota Camry is right at the peak where you’d get the most out of your money, beyond that and the returns get proportionately lower. 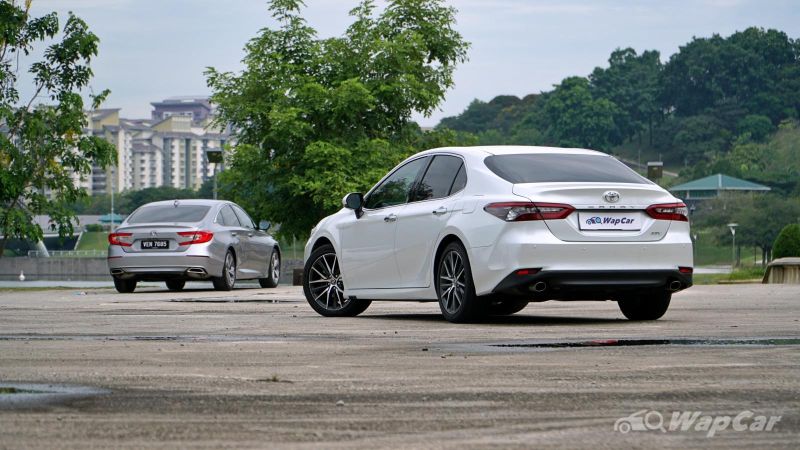 So, if someone says “top up a bit more” to get a 3 Series or something similar, don’t bother. Unless it’s their money that’s being topped up, your hard-earned cash can be saved for something else while you reap maximum returns with a Toyota Camry.

Also read: 7 things you might not know about the Toyota Camry