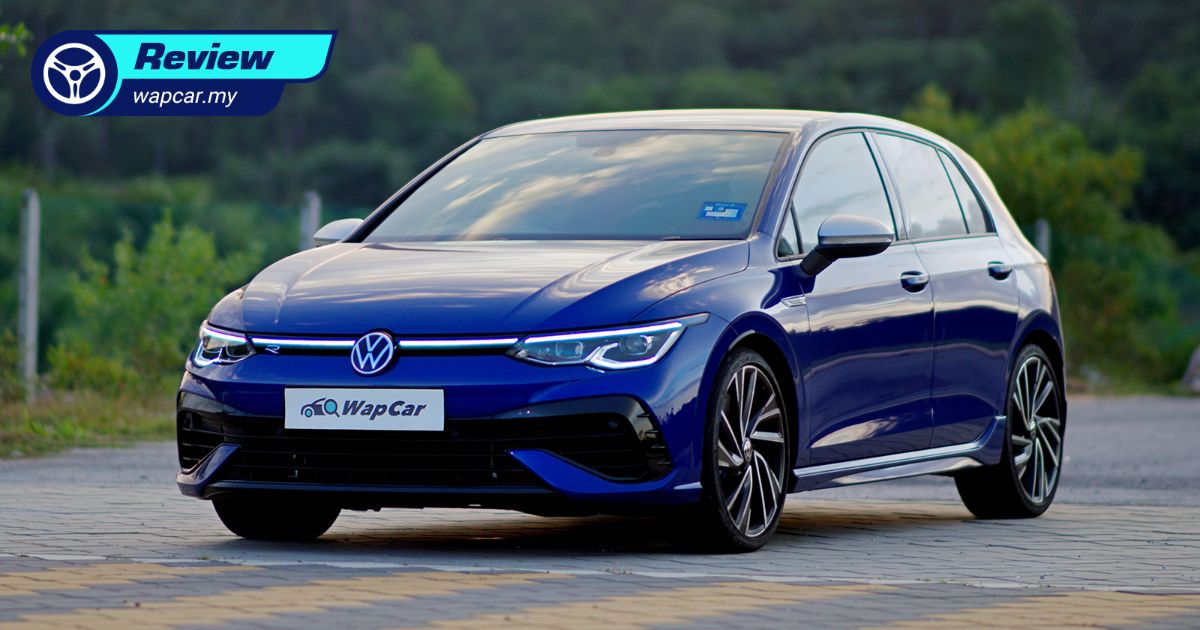 There’s a saying in the world of movies that goes something like, “Sequels aren’t as good as originals.” Some people call it the “Sequel Curse” and it’s a phrase I feel relevant to the 2022 Volkswagen Golf R Mk8. 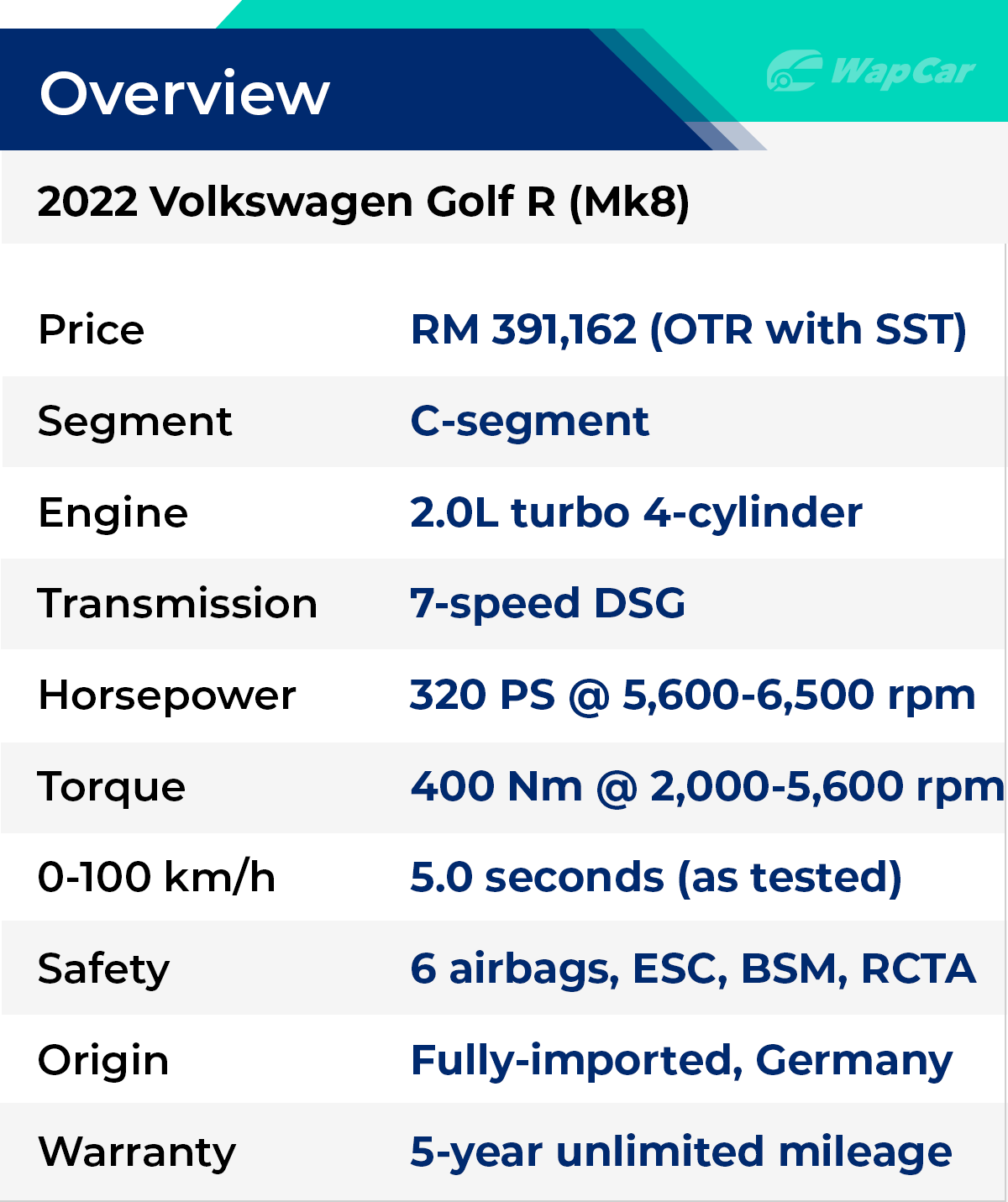 The Volkswagen Golf Mk8 is, in my eyes, a sequel to the brilliant Golf Mk7, which was all-new from the ground up, spearheading the MQB platform that became the virtual spine for Volkswagen. The Mk8 builds upon that and sits on a revised version of the platform called MQB EVO. 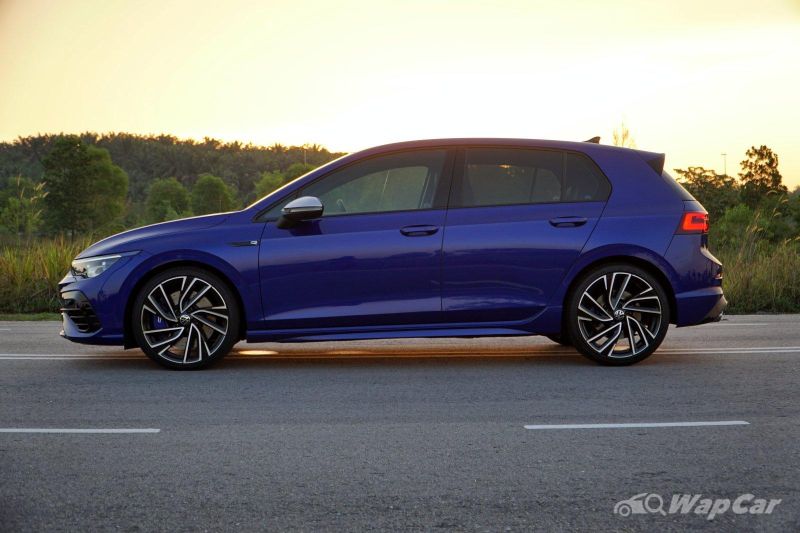 Ideologically, that should make the Golf R Mk8 better than its predecessor. And by every performance metric, it is. It’s faster, grippier, more capable than the Golf has ever been. 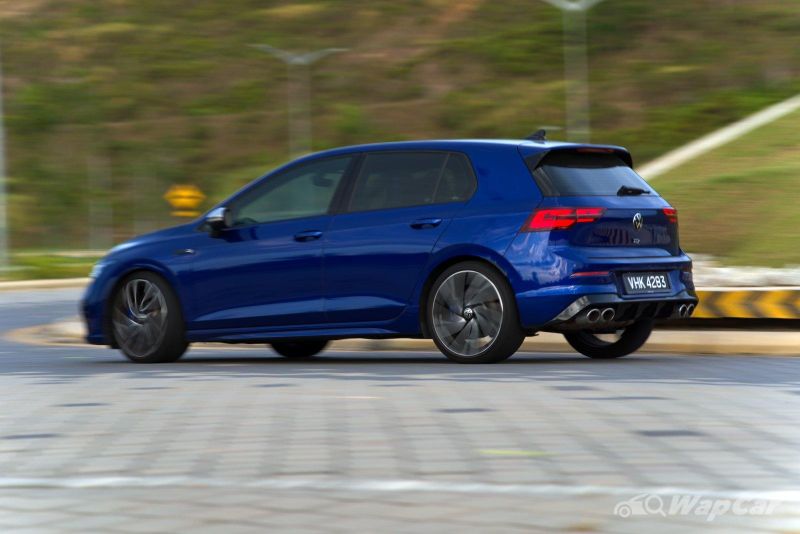 For starters, the engine now makes 320 PS/400 Nm, a not insignificant increase over the Mk7. Put your foot down and it will charge towards the direction you’re pointing at like a bull seeing the red cape. 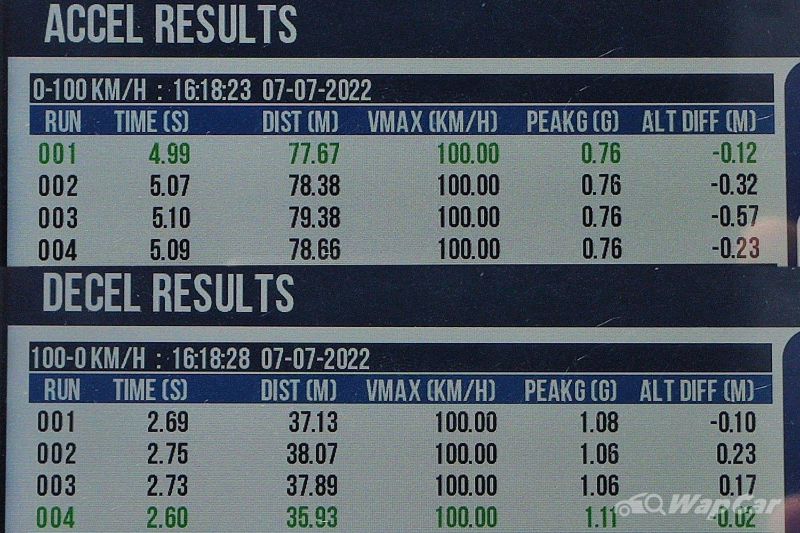 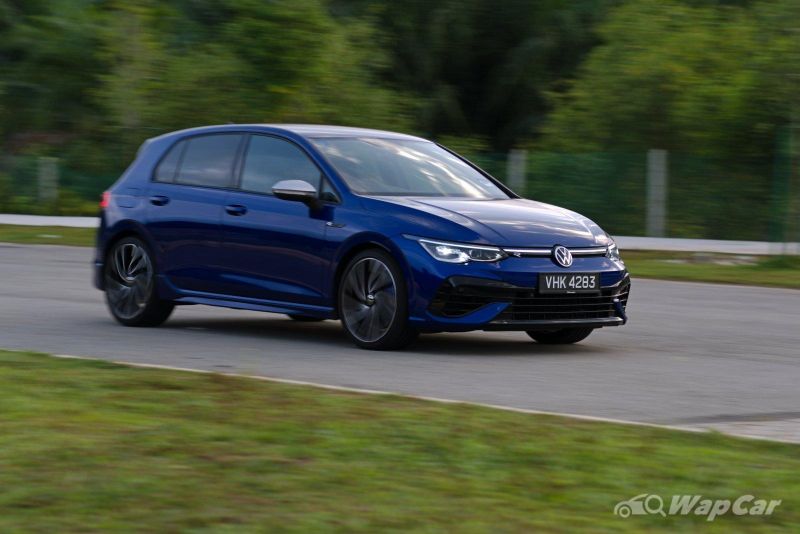 The available traction is also translated to how it steers and stops. Let’s talk a bit about the latter first. The 358 mm front discs gripped by two-piston calipers provide oodles of confidence in its braking power, with excellent feel and control. In fact, I’d say it’s among the most impressive brakes this side of a Toyota GR Yaris. 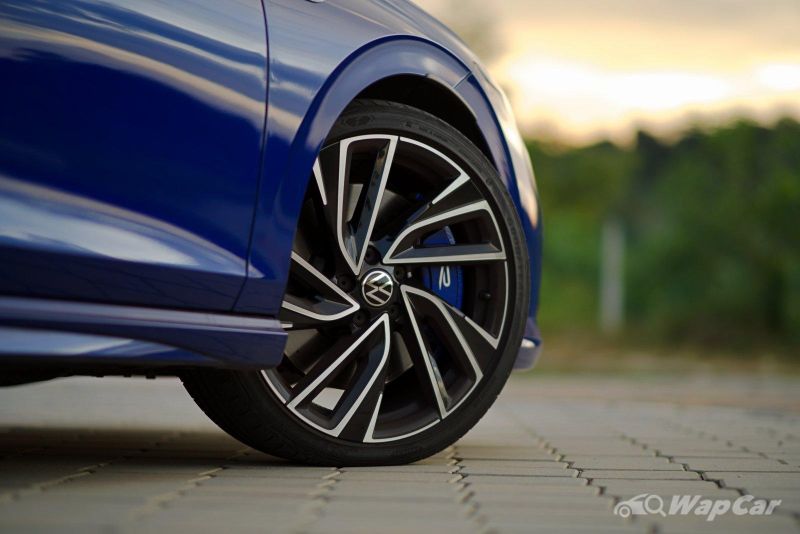 But how does it steer? Well, mind-bendingly capable in short. You get the impression that Volkswagen has tried to dial out understeer as best as they can out of a front-wheel-drive-based platform. 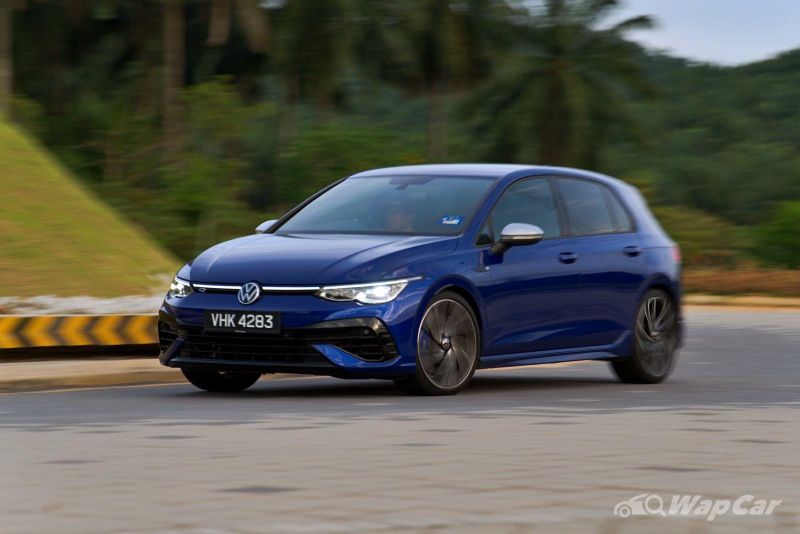 Turn into a corner and the car will assist in giving the rotation you need by tucking its nose into the apex, and the rear simply follows along beautifully with impressive balance. The system works so well - braking the inside wheels when turning or powering the outside wheels when exiting a corner - that it feels surprisingly intuitive.

Combine that with the utter composure through everything thrown its way, the Golf R just gives such confidence behind the wheel. 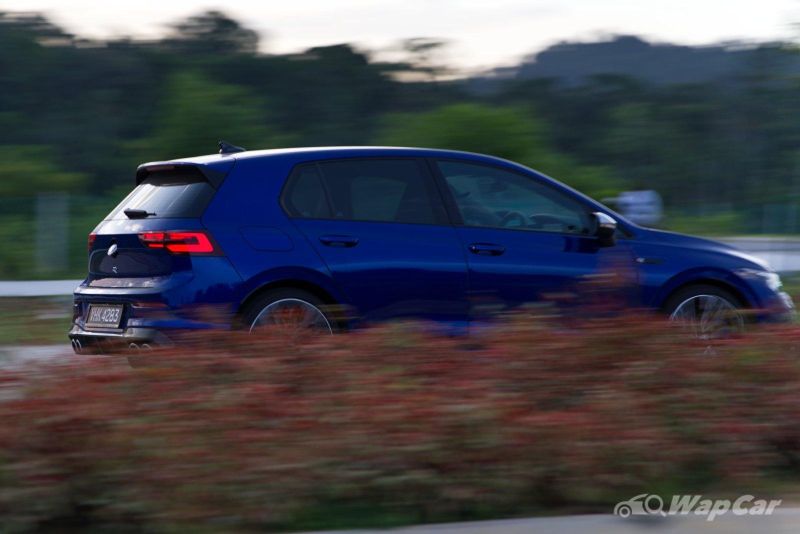 On public roads, you just wouldn’t experience understeer. If you do, then I hope it’s not overconfidence and you know what you’re doing because the Golf R clearly ran out of ideas.

But back to the car, the stiffened dampers, springs and anti-roll bars help contain any unnecessary movements and I feel that the firmer suspension is needed to keep up with the rather quick progressive steering. And for me, that’s where the problem starts – the steering. 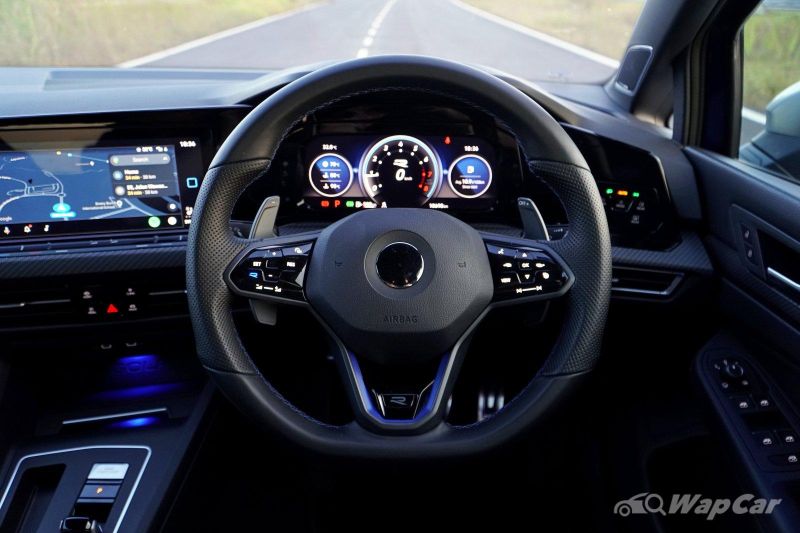 Sure, it’s direct and super responsive, but there’s absolutely no sense of what the front wheels are doing. You won’t feel the steering loading up as you turn in and selecting Race mode merely adds artificial weight. The Mk7, in my memory, has a little more clarity to its steering. 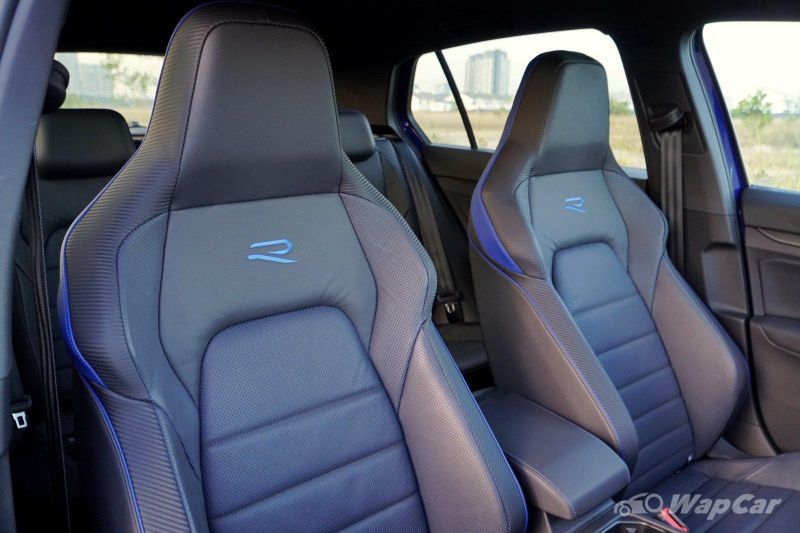 The firmer suspension does trade off a bit of pliancy in the name of body control and it’s most noticeable at lower speeds on broken tarmac. Sharp edges can be quite unforgiving as they thump the cabin. That being said, it's still on the comfortable side of things in the realm of hot hatches.

The 19-inch wheels and rubber-band profile rubbers certainly do not help, so I’d swap them out for a set of 18-inch rollers for extra cushion. 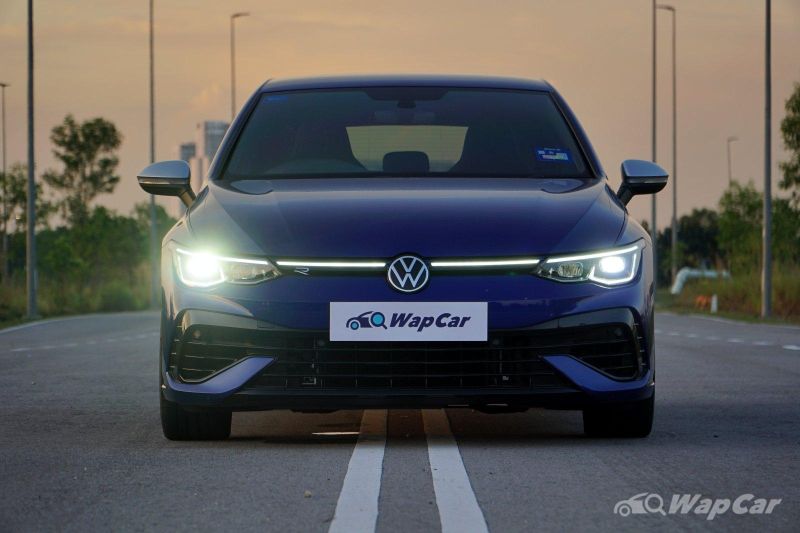 Then we have the drivetrain calibration. In comfort or sport mode, it’s perfectly acceptable in daily driving, but when you ask for more, it questions your decision. Squeeze the throttle when the car is in a high gear and it goes, “Do you really want to go faster?” and after what feels like seconds later, the push comes in.

This is obviously for efficiency purposes (a respectable 9.8-litre/100 km as tested), but it does add to the feeling of detachment on top of the inert steering. 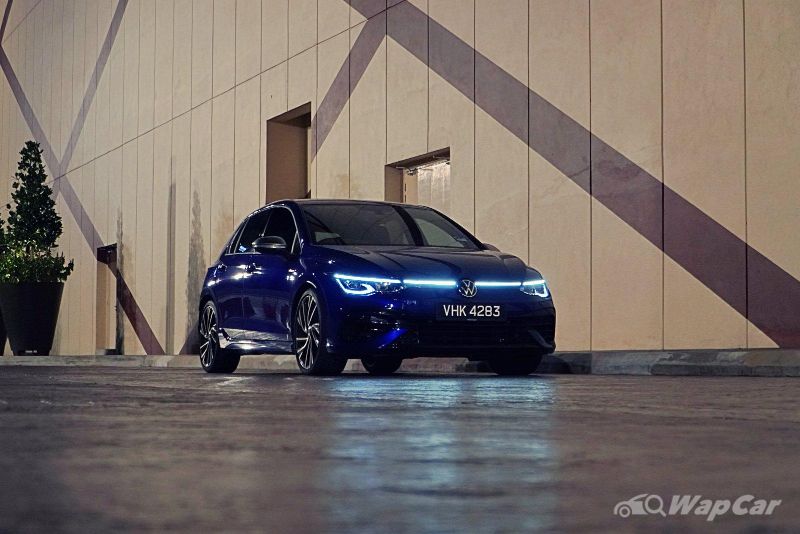 The dual-clutch transmission, while free of any hiccups or judders, might just be too smooth and could do with an extra hint of incisiveness to remind you how quickly it shifts. Admittedly though, it’s nit-picking at this point. 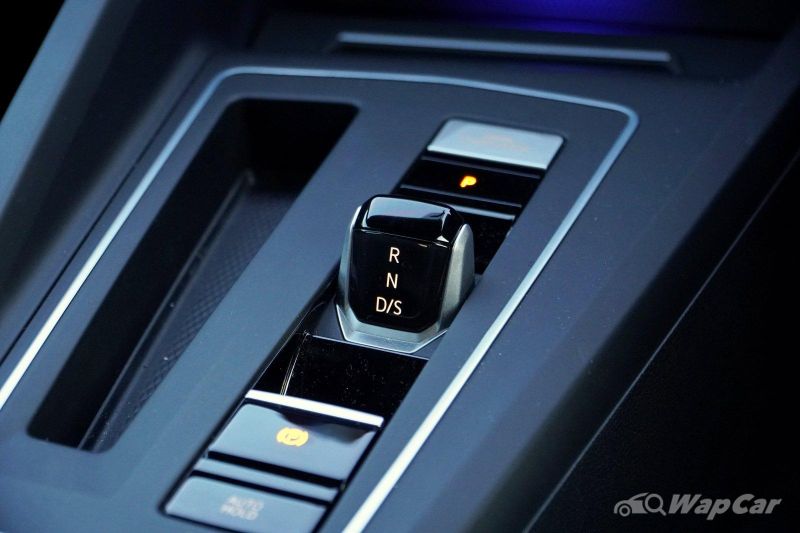 As a whole, I felt that the driving experience is missing something. And I’ve worked out what it is – the smile factor or the fizz. It’s a car that will leave you impressed rather than giggling as you drive along.

For all its dynamic capabilities, it feels like there’s an additional layer of communication between you and the car. 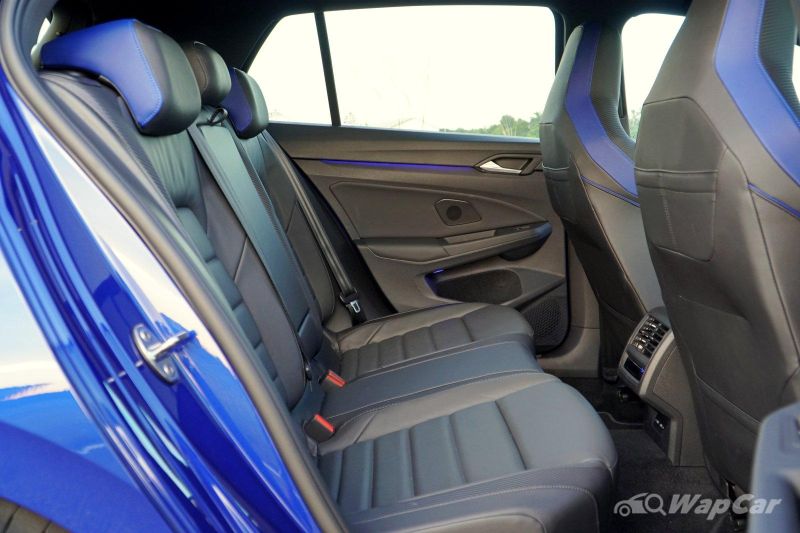 And let’s not get started on the annoying things that plague all variants of the Golf Mk8, like the button-less interior, borderline-infuriating controls, and cost-cutting measures that has literally cost it the upmarket Teutonic feel (a quality that was in the Mk7, Mk6, and even the Mk5 Golf).

Oh dear, it seems like I've started anyway. In that vein, I’d like to ask Volkswagen a question, why do you light up the trims with ambient lighting but not the volume or temperature controls?

This makes the Golf R Mk8 more expensive than the BMW M135i, Mercedes-AMG A35, or even the BMW M340i for that matter. Nearly RM 400k for a Golf? That’s gonna be tough to swallow. 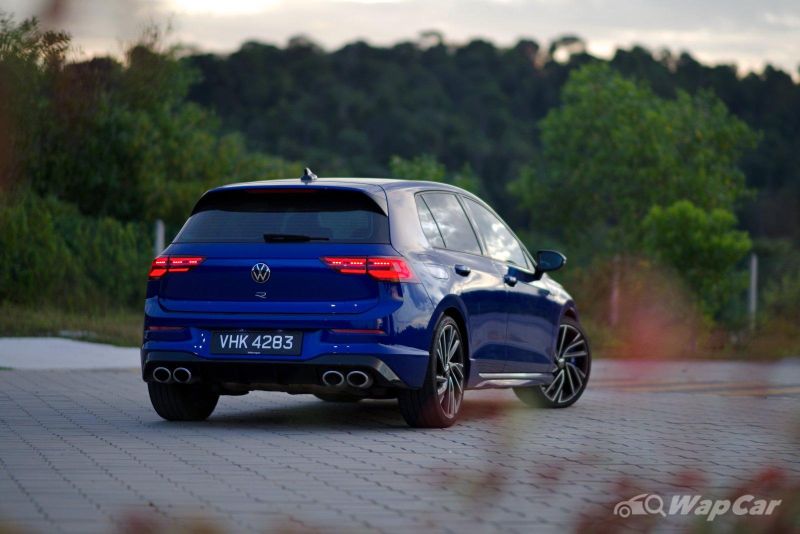 Now, the Golf R Mk8 isn’t a bad car by any means, far from it actually. It's an amazingly accomplished hot hatch; fast, refined, relatively comfortable, practical, and retains the classy image of a Golf.

The thing is, the bar was set at such a height by its predecessor that it would take something truly special to exceed it. Sadly, the Golf R Mk8 fell short of that and is a victim of the Sequel Curse. 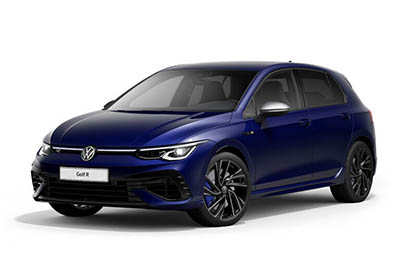