HomeNewsReview: Toyota C-HR – are you nuts to pay RM 150k for this? Maybe. 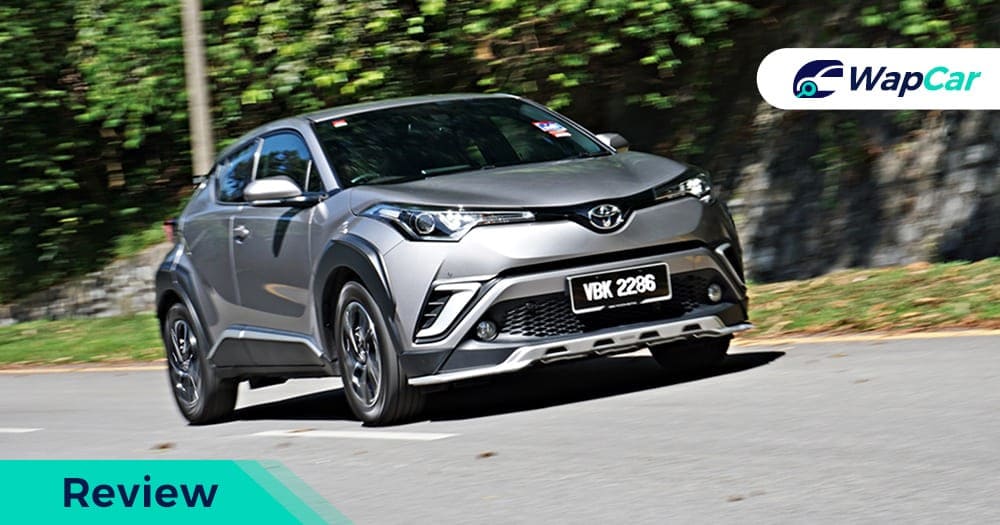 In the eyes of consumers, Toyota just can't seem to do anything right. When Toyota sold bland but super reliable cars, people said that Toyotas were for uncles. When they pushed the boundaries and made something otherworldly like the Toyota C-HR, people said the design is too extreme. 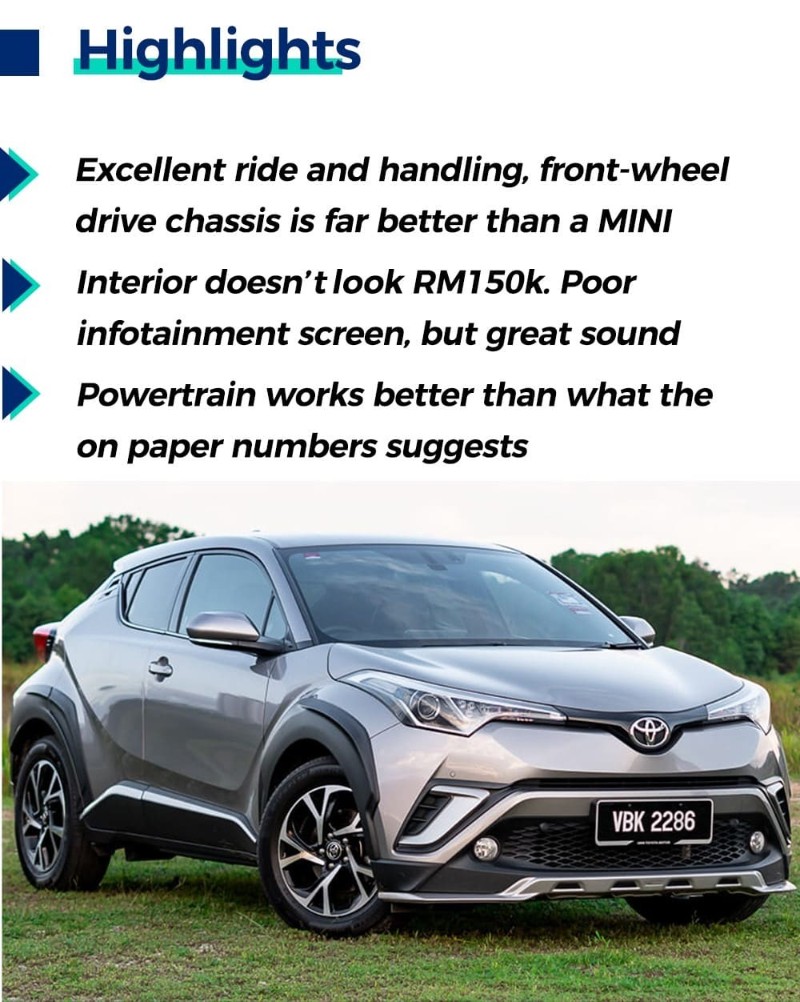 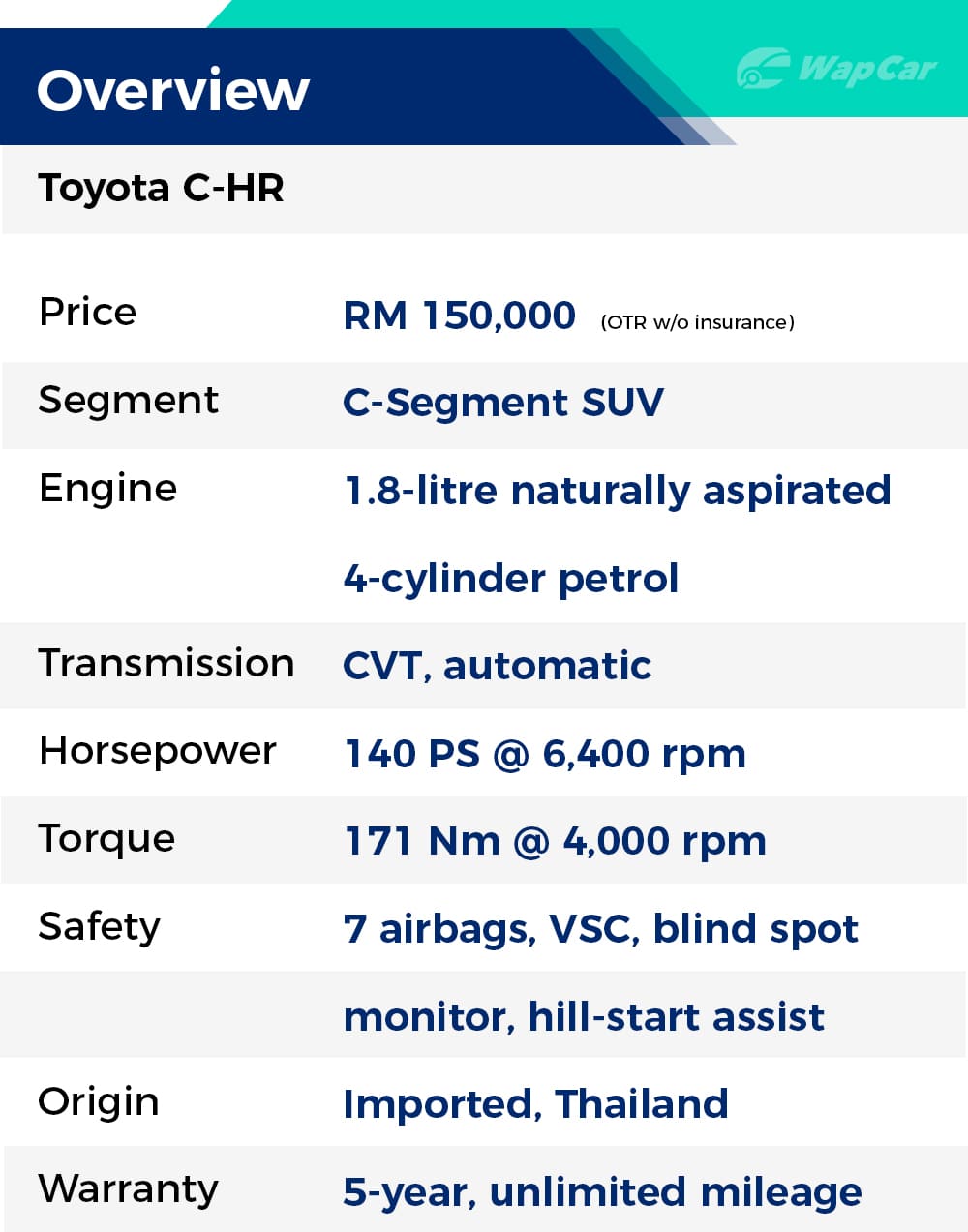 Why is Toyota C-HR so expensive? 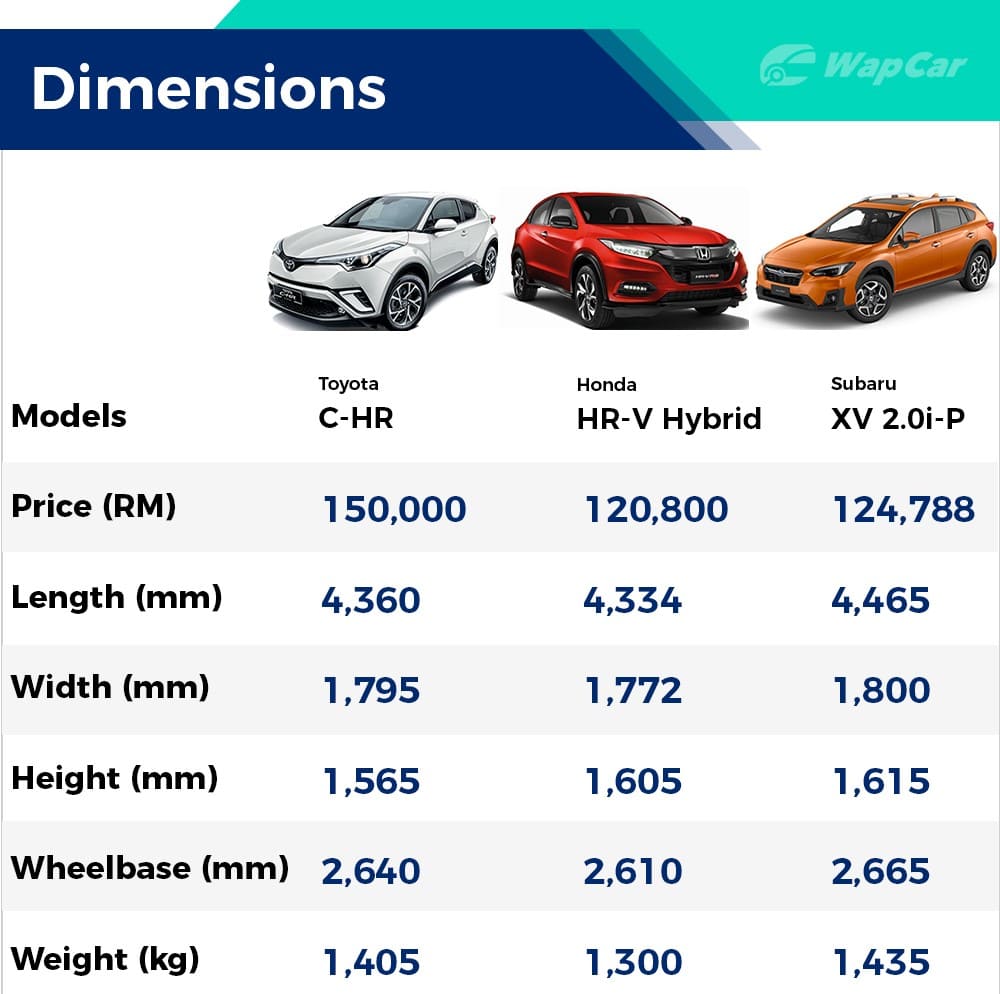 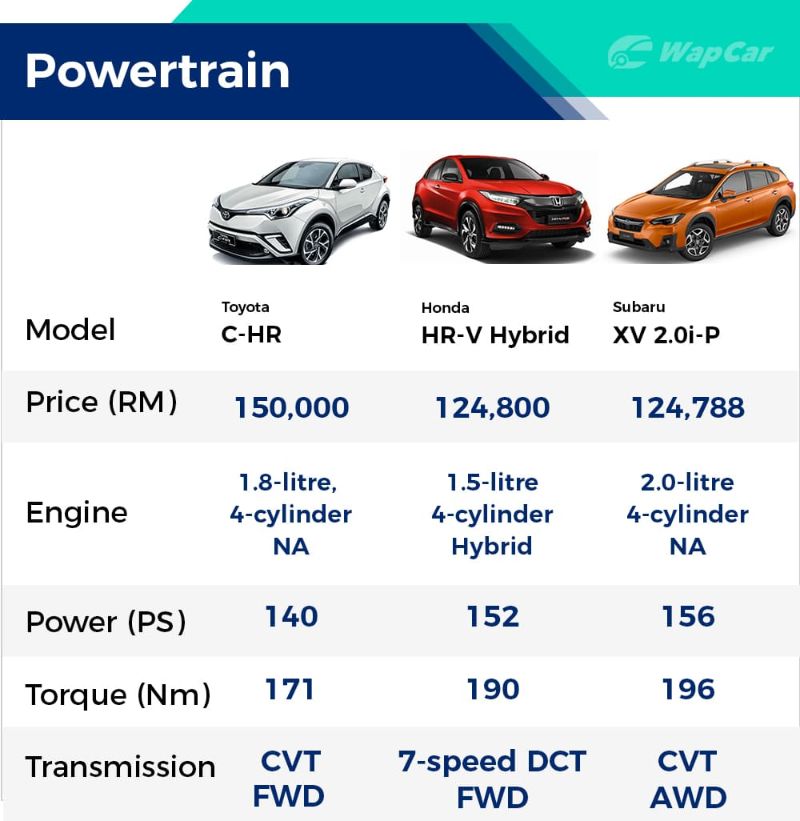 In a land where the dominant Honda HR-V is ever present, the Toyota C-HR stands out. Not many can accept the polarizing lines but if you want to be different and still benefit from Toyota's trusted after-sales and reliability, the Toyota C-HR is the one to have. 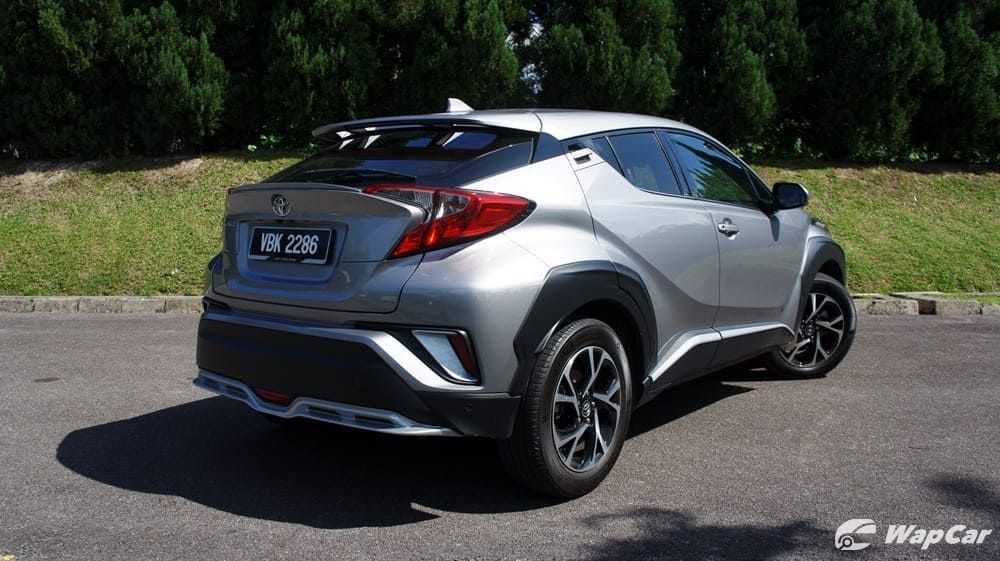 The C-HR's rear half features coupe-like lines, similar to the HR-V but the C-HR executes the same concept with better ergonomics.

In the HR-V, your hands need to bend in an awkward angle to open the rear doors, the C-HR's grab handles are easier to use. 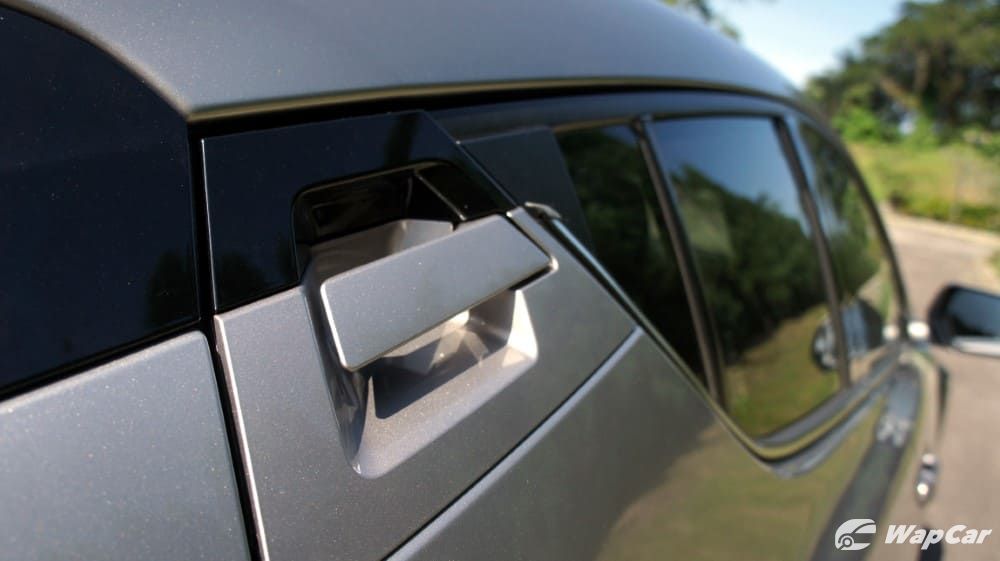 If there is any criticism of the Toyota C-HR's styling (polarizing looks aside), it will be concerns of how it will age. The equally sharp lines Lexus NX hasn't aged quite well. 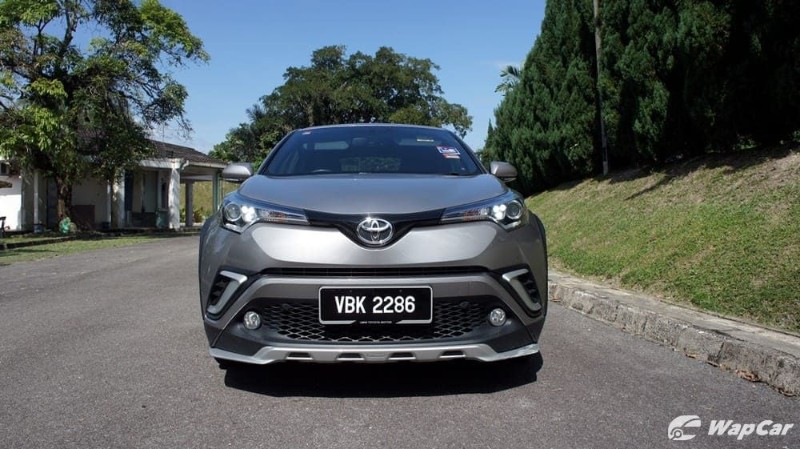 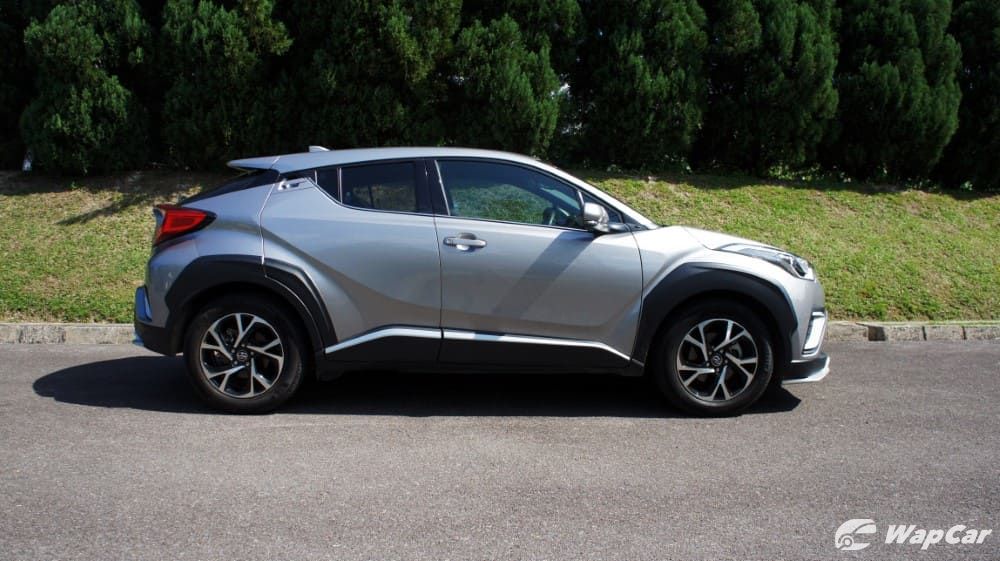 Inside, the Toyota CH-R's interior is not as practical as the Honda HR-V's or the Subaru XV's. Storage space is lacking, and while the cabin materials are good, they are not RM 150,000 good. 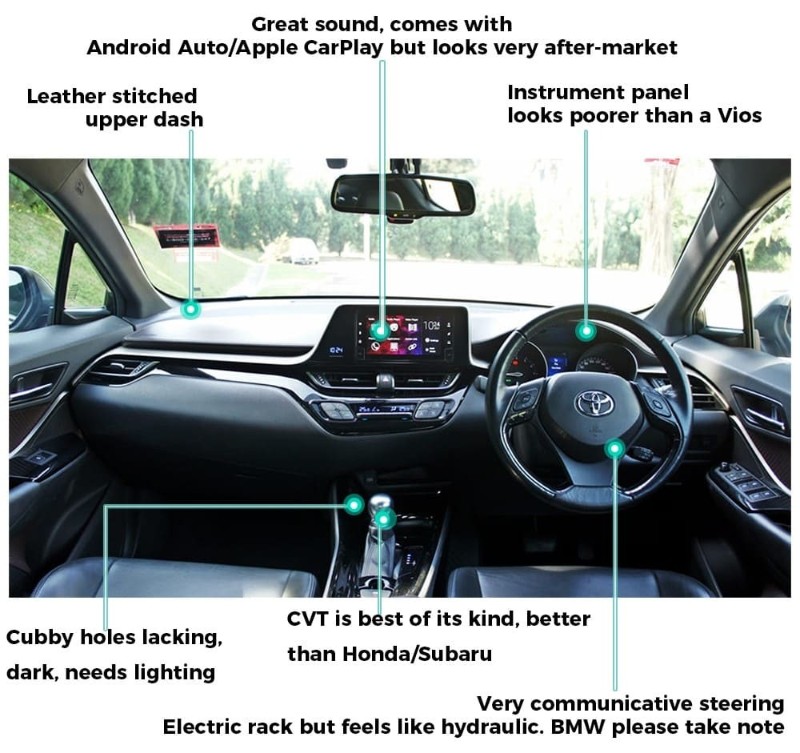 The biggest letdown however, is its locally-sourced infotainment head unit. It's essentially an after-market 2-DIN head unit, thus explains the thick bezel around it.

That's a shame because the sound system is one of the best in its class. Compared to the Honda HR-V – whose infotainment is just as bad, but for different user interface reasons – the Toyota C-HR's speakers are powerful and clear. 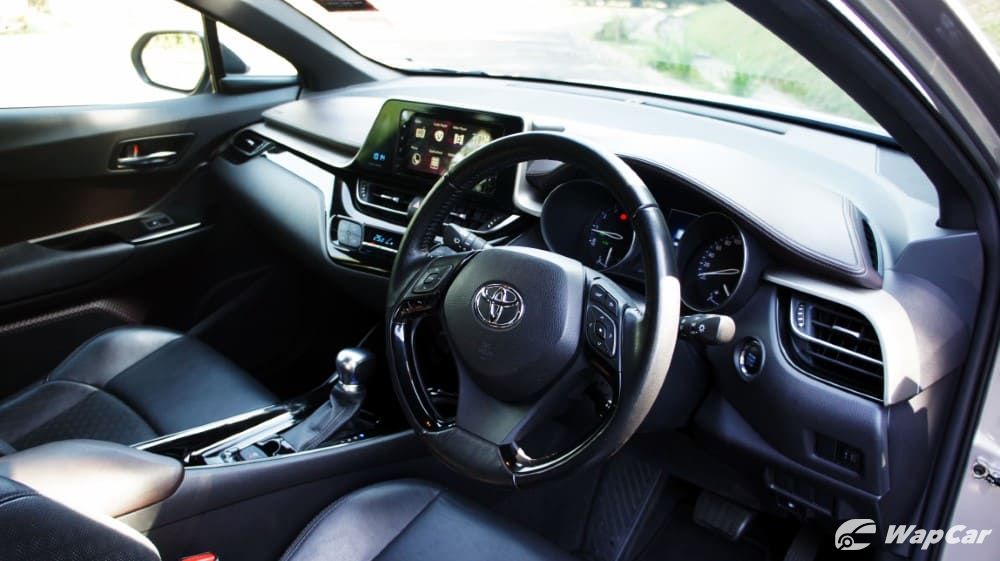 Storage space is lacking but the leg and shoulder room is generous in front and behind, even if the tiny rear windows make it seem tighter than it actually is. 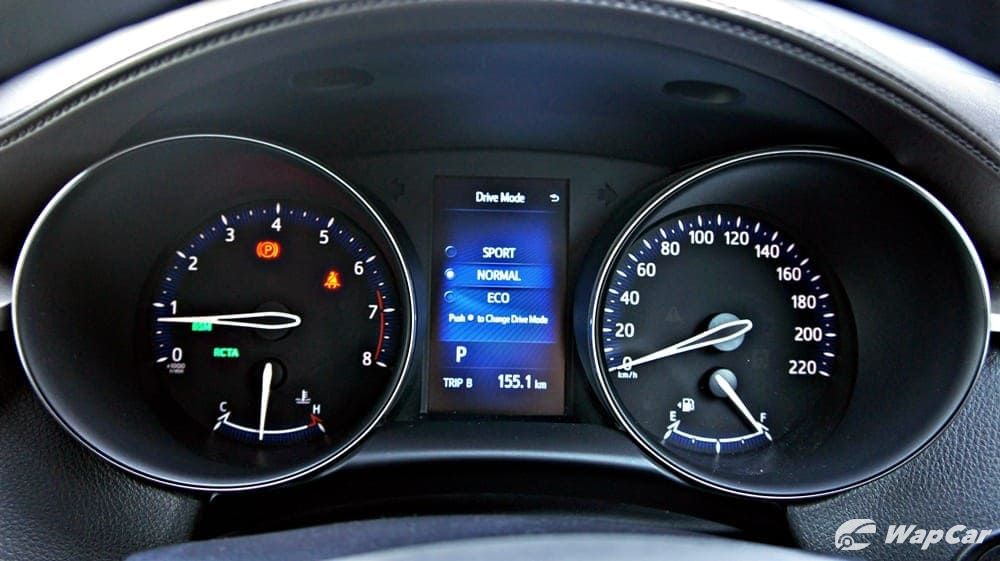 Globally, the Toyota C-HR is offered with three engine options, none of it can match the Honda HR-V Hybrid's 152 PS and 190 Nm or the Subaru XV's 156 PS and 196 Nm, so performance is not the Toyota C-HR's forte. 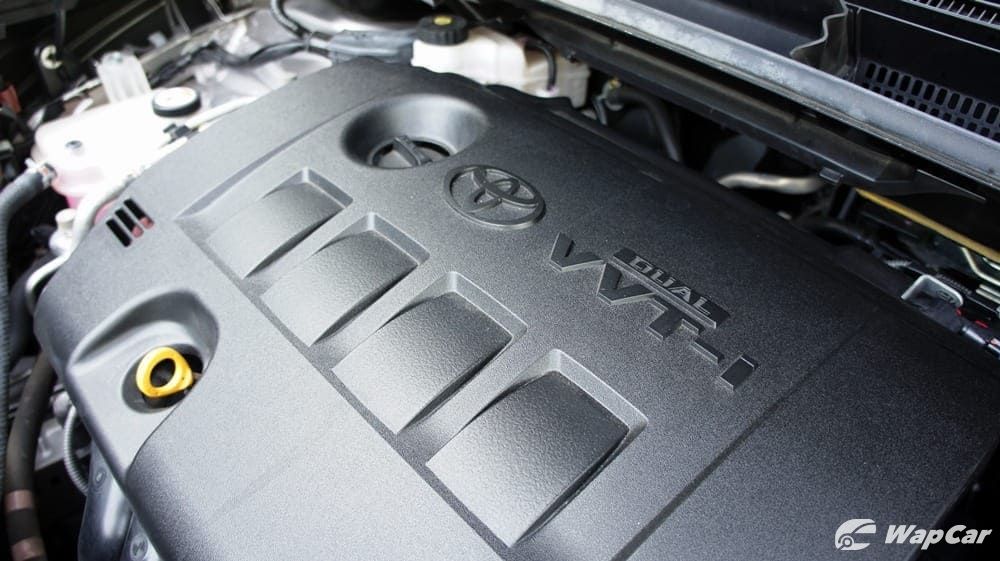 The 1.8-litre hybrid is pretty decent but the additional weight upsets the C-HR's excellent ride and balance. 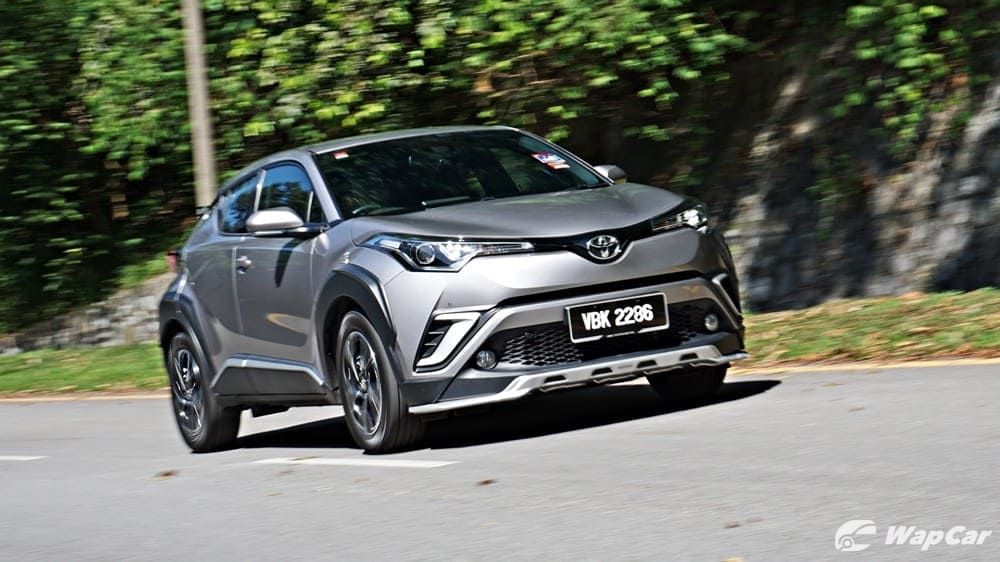 It's shared with the Toyota Corolla Altis (2ZR-FE), but tweaked to be compatible with Thailand's E20 ethanol-petrol biofuel (hence the slightly different 2ZR-FBE engine code), meaningless in Malaysia but this is essentially a Thai specs car.

If you do drive your C-HR to Thailand, it's OK to fill it up with E20 gasohol. 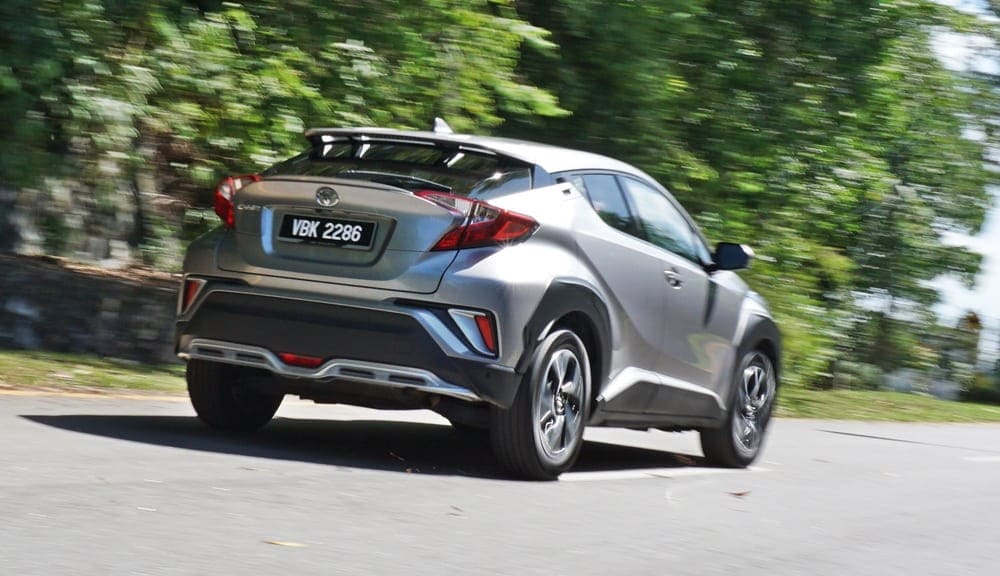 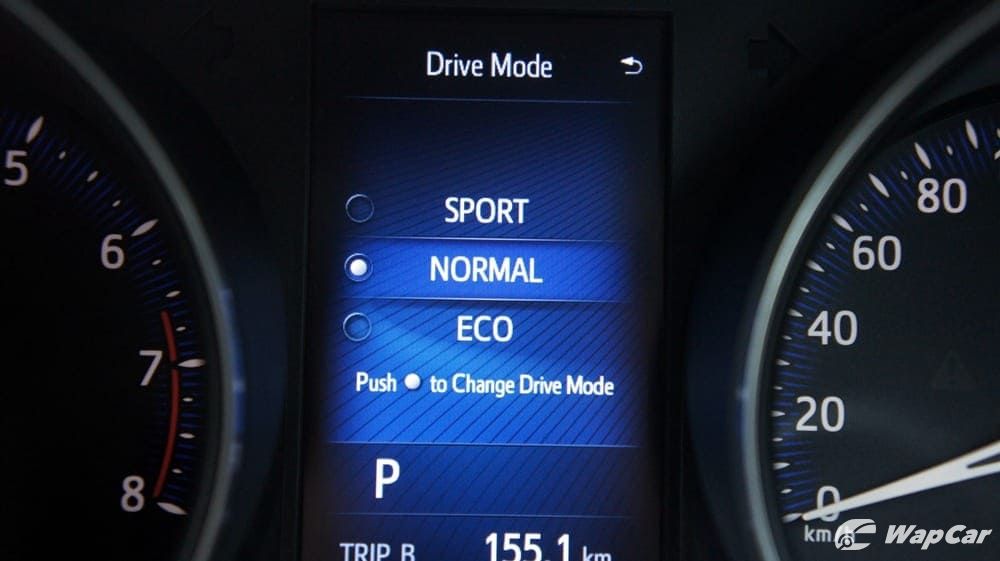 The CVT is the best in the business. It's quiet, responsive and holds just the right ratio when you are going downhill. Definitely better than Subaru XV's CVT, which is its weakest link, but of course the Honda HR-V Hybrid's 7-speed dual-clutch automatic is still the best overall.

Handling is also very good, you feel one with the car. It's hard to explain but it really does feel like a Toyota 86 that has been adjusted as a daily commuter car. It lacks power but the steering and chassis communicates with you in a very direct manner.

You feel the road and tyre's grip level very clearly through the steering wheel. The feeling is so organic that it's hard to believe that this is an electric power steering rack.

Through the corners, you feel the car's movement through your hips. You and the car move as one, there is no delay between any change in steering direction and the sensation you feel on your hips – the hallmark of every great handling car, irrespective of power output. 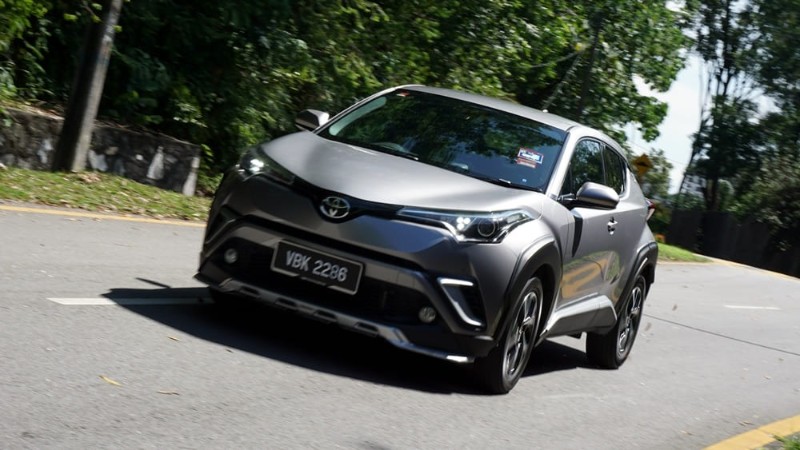 It's not a fast horse, but it's a damn fun one to ride.

The Toyota C-HR's cabin might not feel RM 150k, but its handling (already elaborated above) and ride comfort certainly matches the asking price.

In fact, it offers the most comfortable ride on any mainstream, daily commuter-friendly car we've tested recently.

The Toyota C-HR is proof that you don't have to sacrifice ride comfort for good body control. 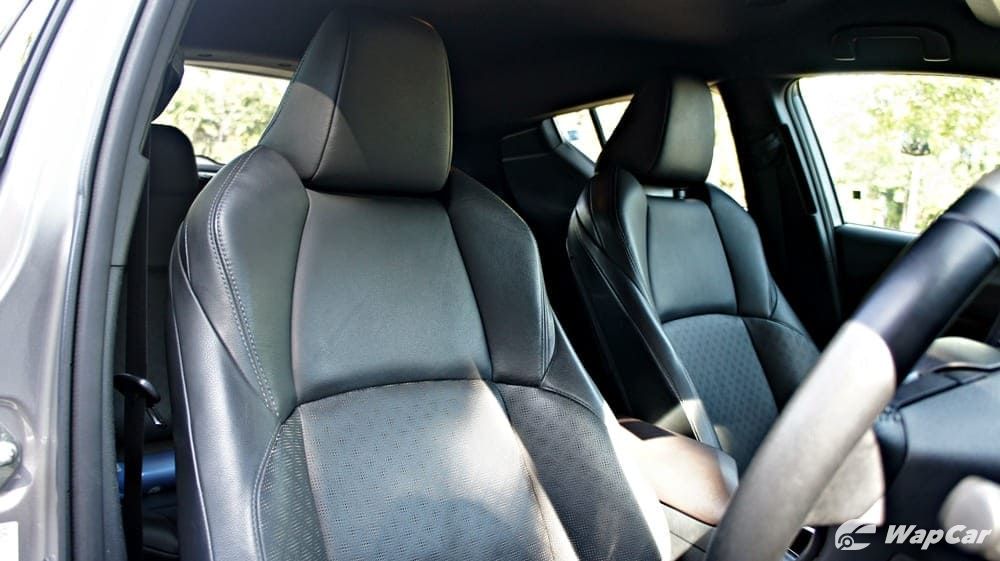 The electric parking brake's Auto Hold is the best we've tried. It's smart enough to know when you are parking or making a three-point turn and won't engage unnecessarily. The Honda HR-V's Brake Hold can't that, requiring you to manually disable the function when parking.

On the move, we measured the cabin's quietness at 68 dB (real world, uncontrolled environment) when travelling at 110 km/h, but it felt quieter than the numbers suggests. 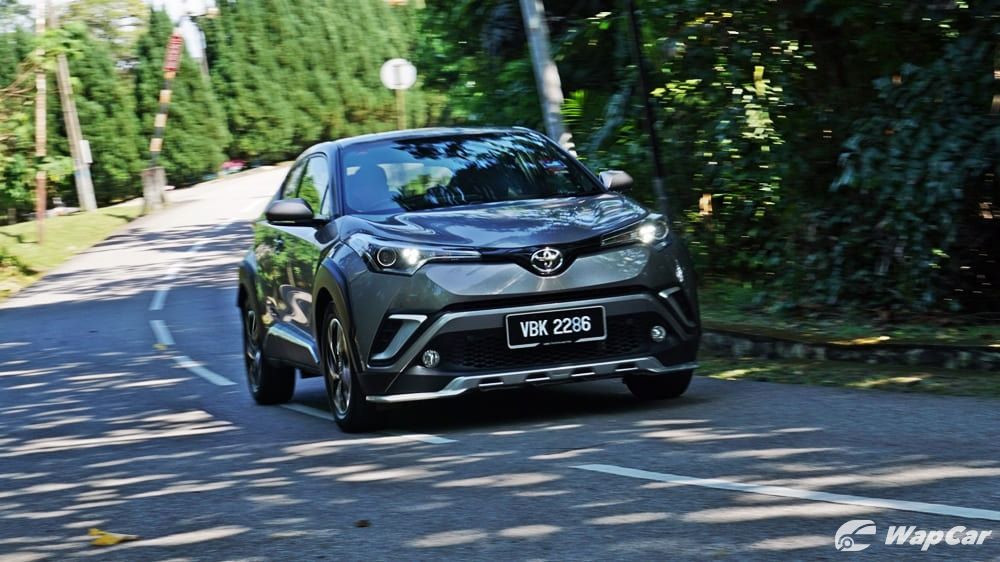 Don't buy the Toyota C-HR if you are evaluating it like how an accountant would. The C-HR makes little sense if value for money is what you are seeking for.

Instead, it's car for those who want an icon that stands out, appreciate good handling, reasonably spacious interior, high seating position, easy to get in and out – basically all the attributes of a MINI Countryman, but with less power, a lot better reliability, and a much cheaper price tag. 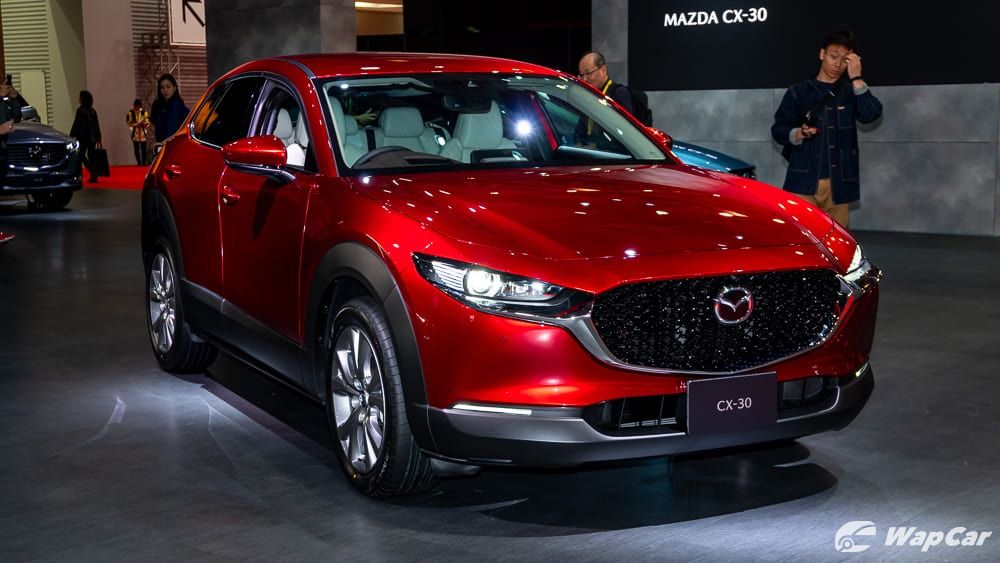