Home > News > Review: Toyota GR Yaris – Drive this, and the Golf R or A35 becomes a distant memory

Review: Toyota GR Yaris – Drive this, and the Golf R or A35 becomes a distant memory 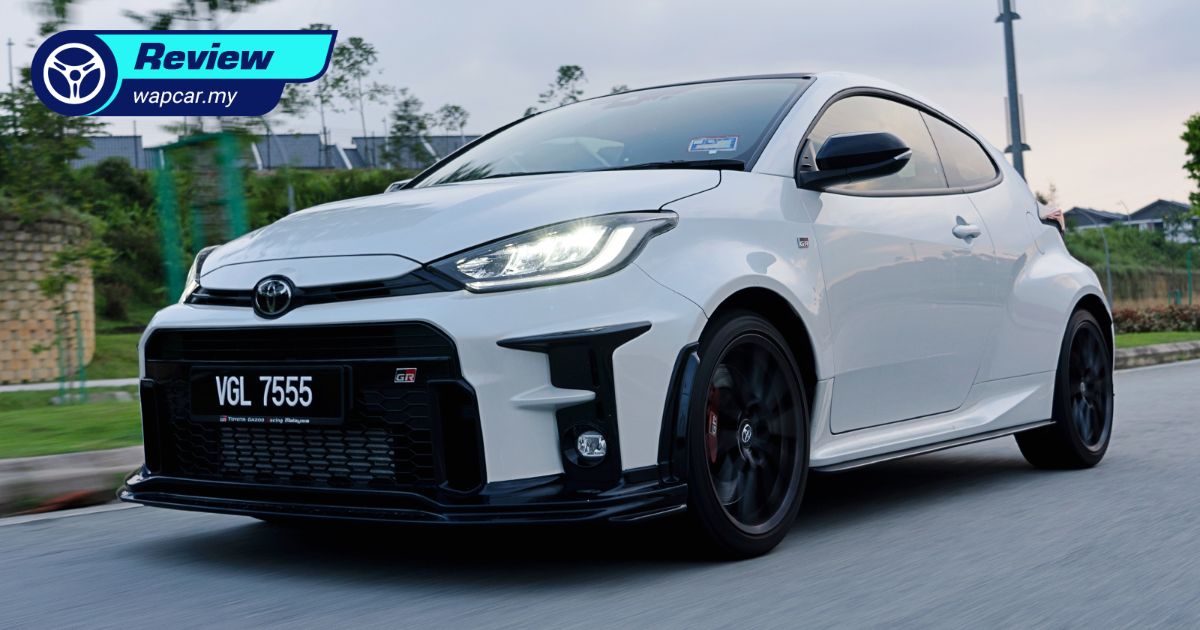 When Toyota’s president Akio Toyoda said “No more boring cars” during an announcement back in early 2017, I ignorantly chuckled. Was it an admission or a promise, or both? Regardless, little did I know that development for the Toyota GR Yaris had already commenced. 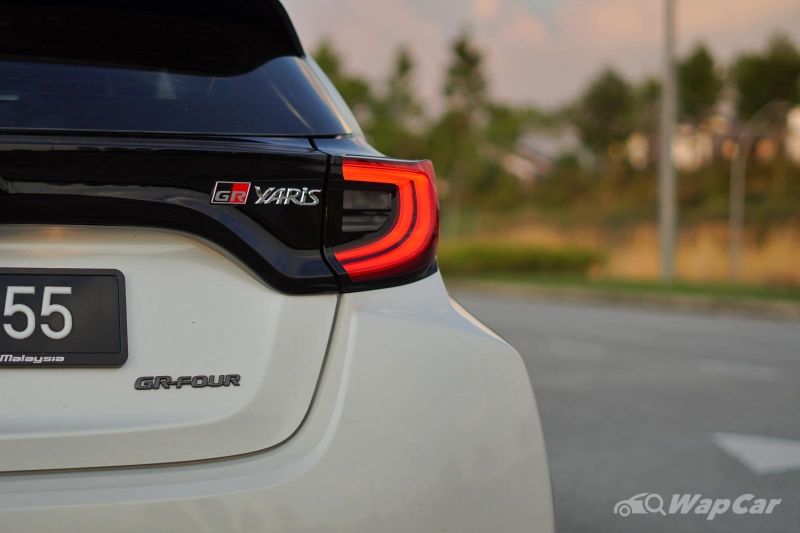 It was the dawn of TNGA products and since then, I’ve found that Toyota models that are underpinned by it have an organic, fluid flavour in terms of driving dynamics, and that’s only the ‘regular’ models.

There’s a division within the company that Toyoda-san has been expanding – the Toyota Gazoo Racing, Toyota’s motorsport division. Being a racing fan and a driver himself, Toyoda-san pushed for more exciting products through Gazoo Racing. 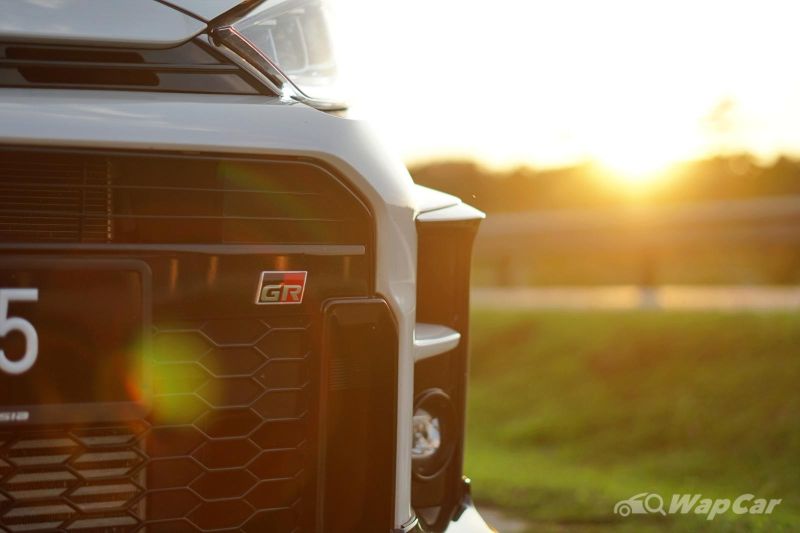 To date, the most exciting product from Gazoo Racing has to be the Toyota GR Yaris. Unlike the GR Supra or the GR86, the GR Yaris is bespoke Toyota with no shared parts with any other brand. It was basically a green light from the President of Toyota to go the whole nine yards on the car, and the engineers did just that. 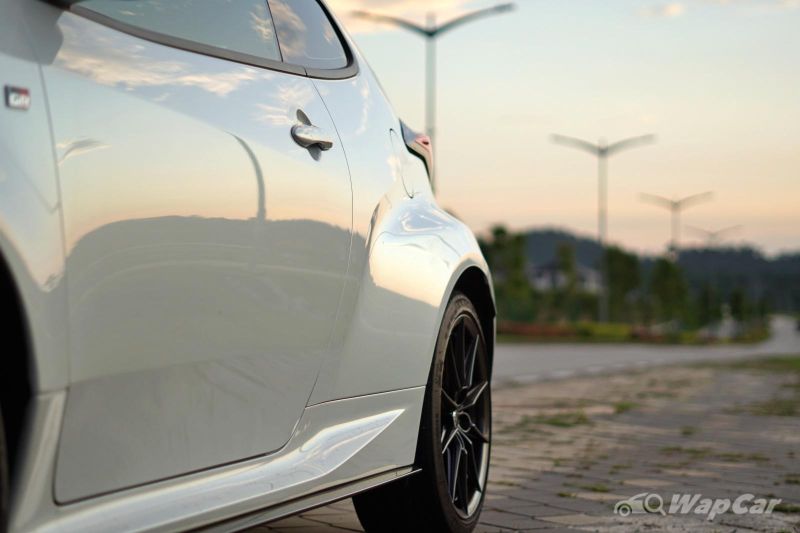 The result? In my book, the Toyota GR Yaris simply ticks everything that makes a great driver’s car. This was no mean feat considering how high my expectations were prior to driving it from all the hype.

So, what exactly makes a great driver’s car? 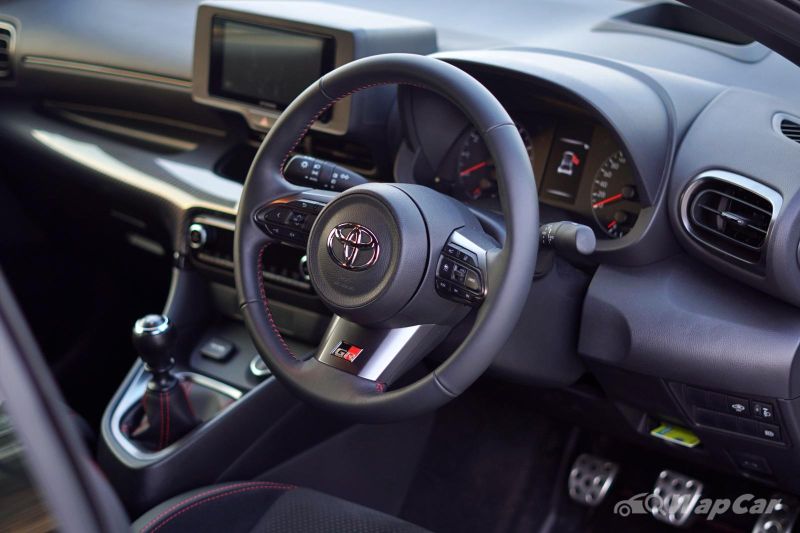 First up, steering. It is the primary form of communication between the driver and the car, and the GR Yaris absolutely nails the steering.

Its weight, ratio, and feel are all spot on, almost like an old-school hydraulically-assisted steering. You can feel the steering loading up in wonderfully linear manner as you apply more input. 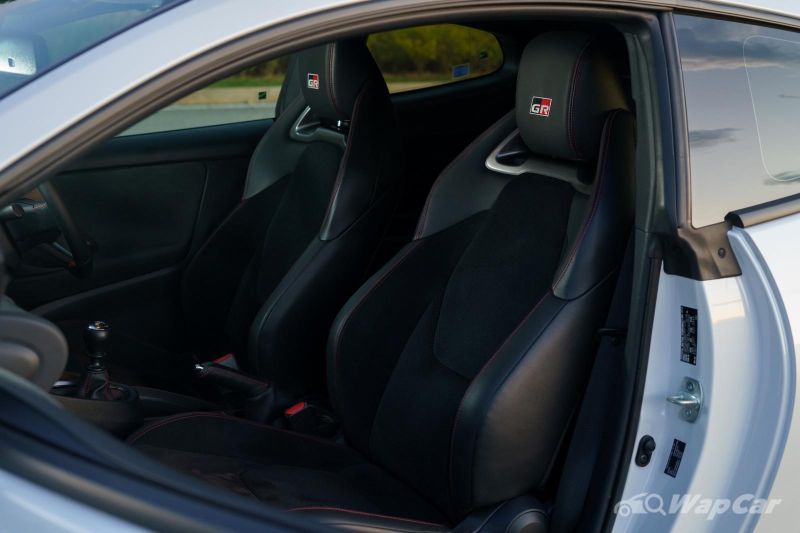 Hop into the Volkswagen Golf GTI MK8 for example, and you’ll find that its steering is noticeably quicker than the GR Yaris, giving the impression of agility.

But the GR Yaris doesn’t need a trick variable ratio steering to be agile, it just is. And the steering in the GR Yaris offers a whole more feedback than the MK8 GTI, which feels completely inert by comparison. 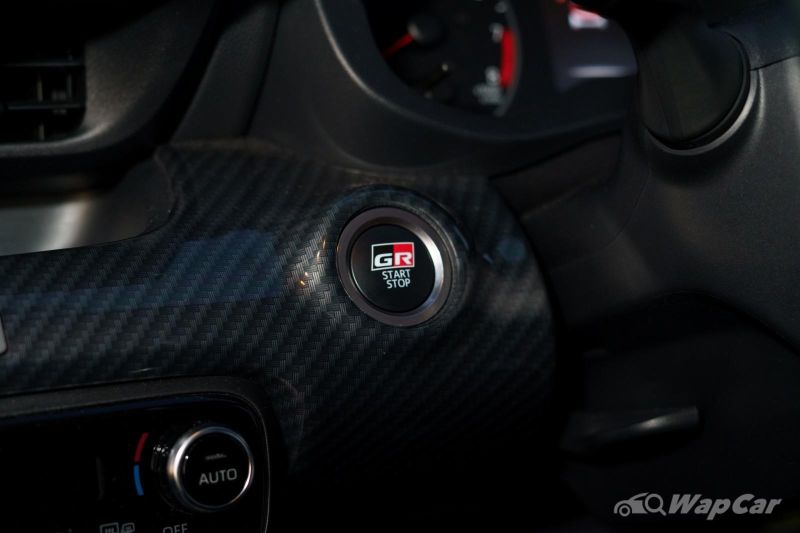 Electric power steering has had its share of flak from enthusiasts for the lack of feedback and feel in general. But honestly when it’s this good, the hydraulic power steering can indeed rest in peace. 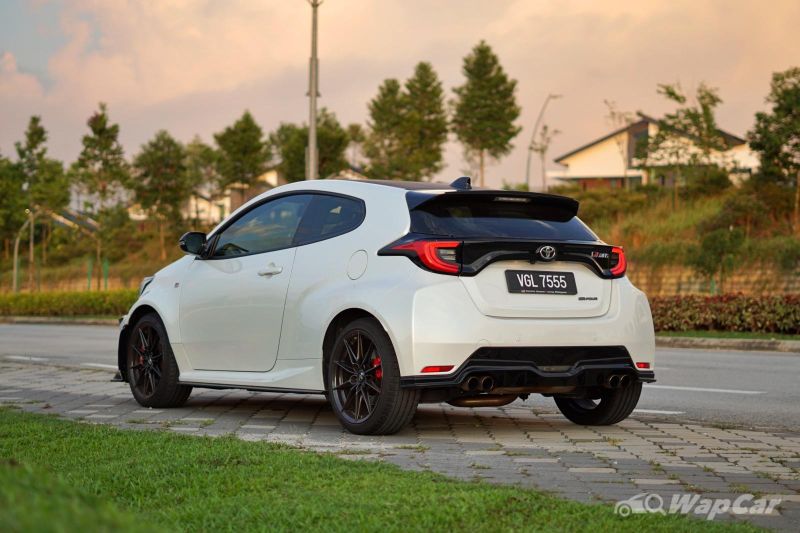 Next, the suspension and in my opinion, the ride quality can make-or-break a car. Great damping makes a car infinitely more pleasurable to drive and to be in.

Its job is to absorb all the unevenness, keeping the tyres in contact with the road and the car levelled so that you can focus on placing the car precisely where you want it. The GR Yaris does all of that albeit in the firm side of things. It gets busy at times, but never uncomfortable. 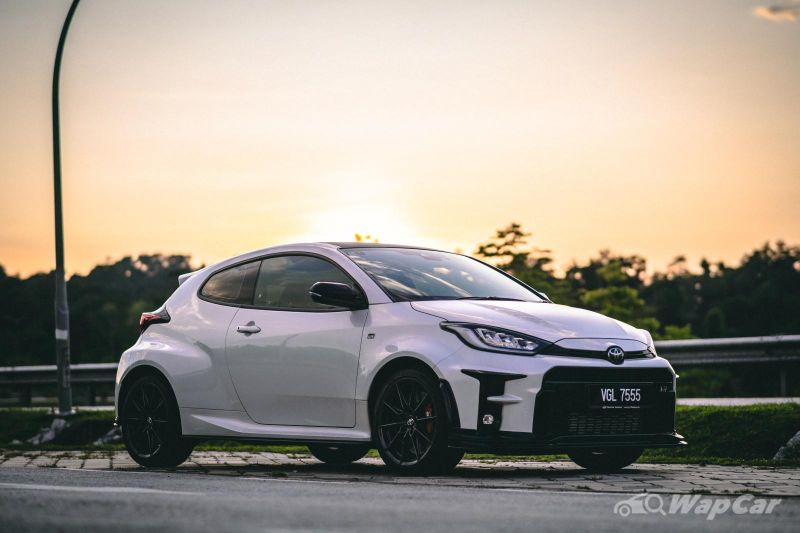 Let’s move on to the pedals, starting with the left one, the depressible footrestclutch. Immediately, you’ll notice that the clutch pedal is firm and incredibly easy to judge where the engagement point is.

It’s also helped by the anti-stall feature that revs the engine up to around 1,500 rpm when the clutch pedal is at the biting point, with no throttle input at all. This works with or without the iMT feature. Personally, I feel like this is cheating, making it almost too easy to set off.

You probably won’t stall the GR Yaris, but it will make you look like you’ve stalled it with its stop/start feature, which is the first thing I’ll turn off upon starting the car. But enough digression, let’s get back to the gearshift.

Like the steering and clutch, there’s a sense of heft going from each gate and a mechanical feel to it. And because of its weight, you can’t be lazy with your shifts and slur them. Every shift needs conviction and precision.

Also read: You might want to sit down for this because Toyota’s developing an automatic GR Yaris 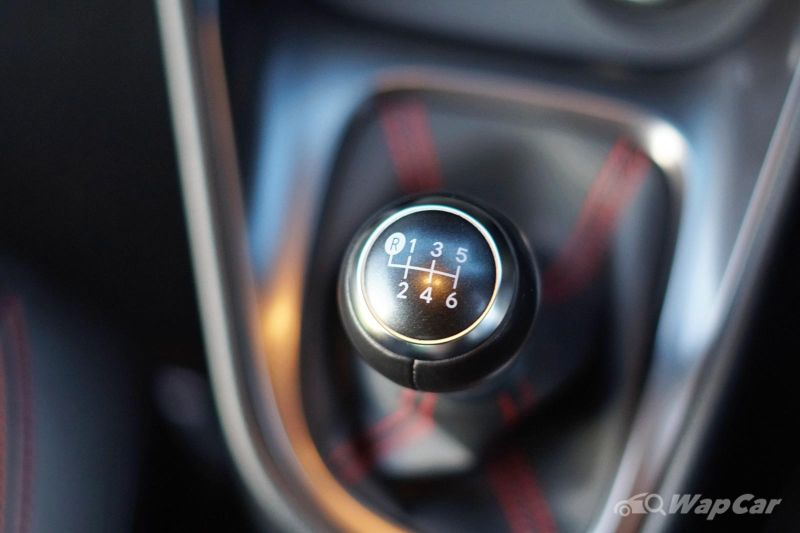 The brakes are one of, if not, the best I’ve ever felt. It’s firm and offers superb feel, providing drivers with enormous confidence in its stopping power.

But I did find that the brake pedal is a little too high, which makes it tricky to heel-and-toe in normal driving conditions where the brake pedal is lightly depressed. This is perhaps the only complaint I have in the entire driving experience. 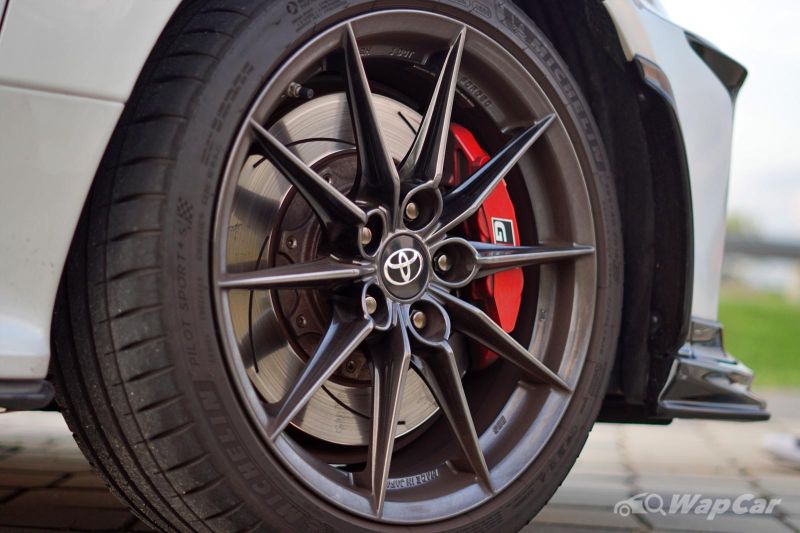 Last but certainly not least, we move onto the right pedal, which plays a 3-cylinder instrument. While 261 PS doesn’t sound like much these days, I promise you, it feels a whole lot quicker than the horsepower suggests. 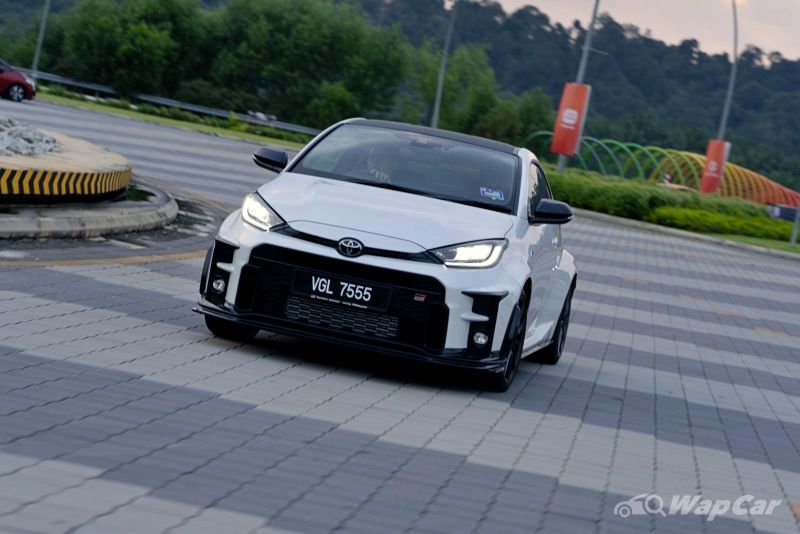 Mind you, I’ve felt the full violence of the BMW M5, Mercedes-AMG E63S or even the Porsche Taycan 4S, and this little GR Yaris still impresses from the way it takes off. 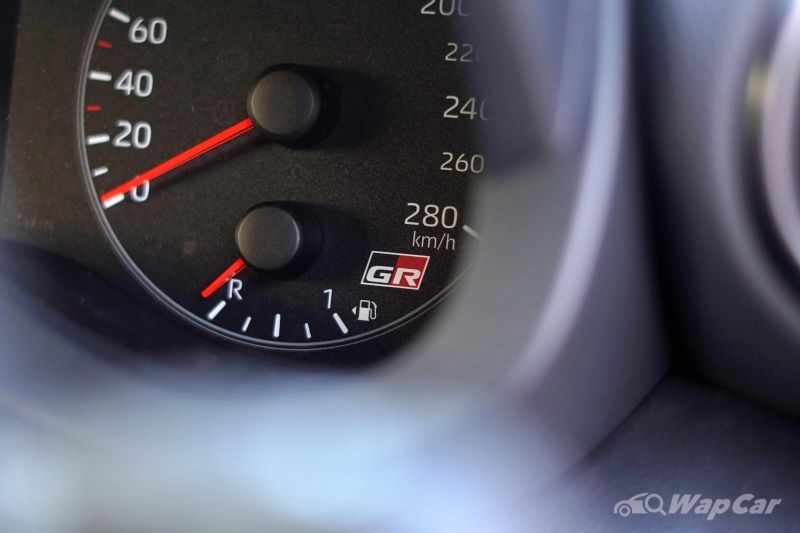 The way the GR Yaris pulls from first to third gear is almost intoxicating and I found myself giggling like a toddler that’s being tickled. Though above that, acceleration starts to taper off and higher-powered cars like the Volkswagen Golf R will begin to reel in the GR Yaris. 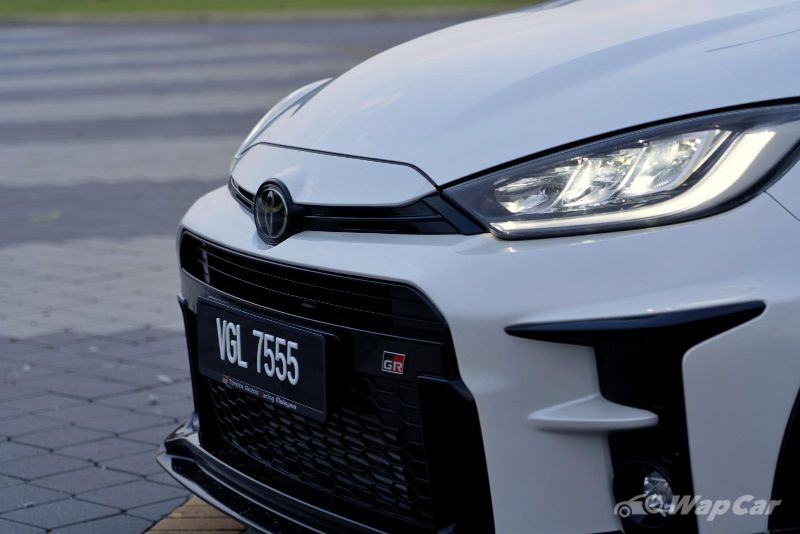 Personally however, that isn’t necessarily a bad thing because it’s not a too-fast-for-the-road type of car. You can use its power on the road without the feeling of impending death.

Some have said that you need to wring its neck for the GR Yaris to come alive, and while I do concur, this matured character makes it a viable daily runabout. You can drive this every single day and it will return decent fuel economy, as if that matters to buyers of this calibre.

It does the mundane stuff without a fuss. But you just know at the back of your head that this car is ready whenever you are, like a puppy dog salivating at its food, waiting for its master's permission. 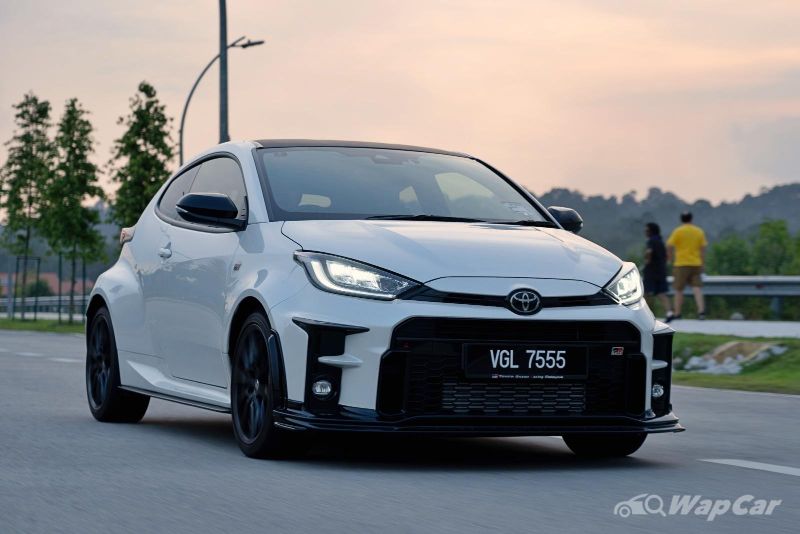 And we haven’t even talked about the AWD system with its ability to shuffle power across axles and rotate the car on throttle.

Unfortunately, I wasn’t able to try it out but my ex-colleague Jason had the pleasure of taking the GR Yaris on a gymkhana run, and I was told that it simply does what you want it to. Here’s the video.

What about its flaws? Well, visibility is poor from the obstruction of the rear-view mirror, the interior is perhaps too plasticky for a car that costs RM 286k (with SST discount), and the seats can be a little too high for some. 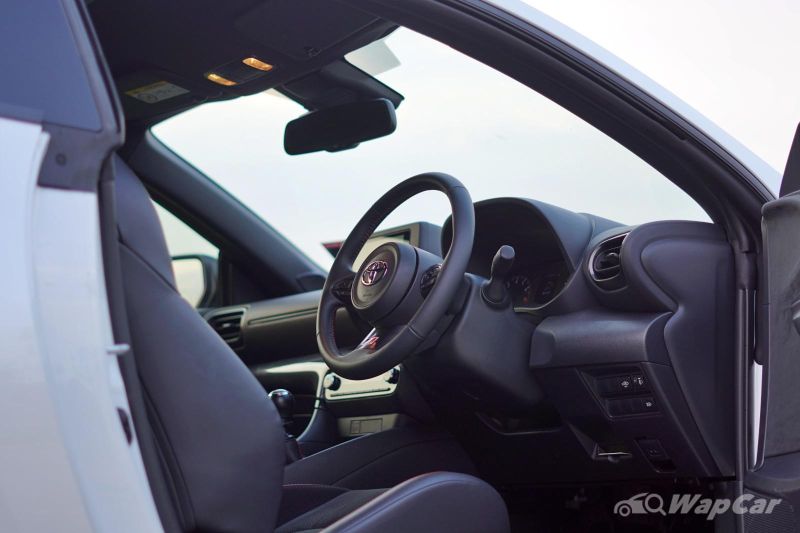 But I honestly don’t mind any of them because the GR Yaris has completely drawn me in. The more I drove it and gotten in tune with it, the more I want to find out what it can do.

It rewards good driving and makes you feel like an absolute hero. That feeling is such as an addictive one that I was having withdrawal syndrome after I reluctantly returned the GR Yaris. 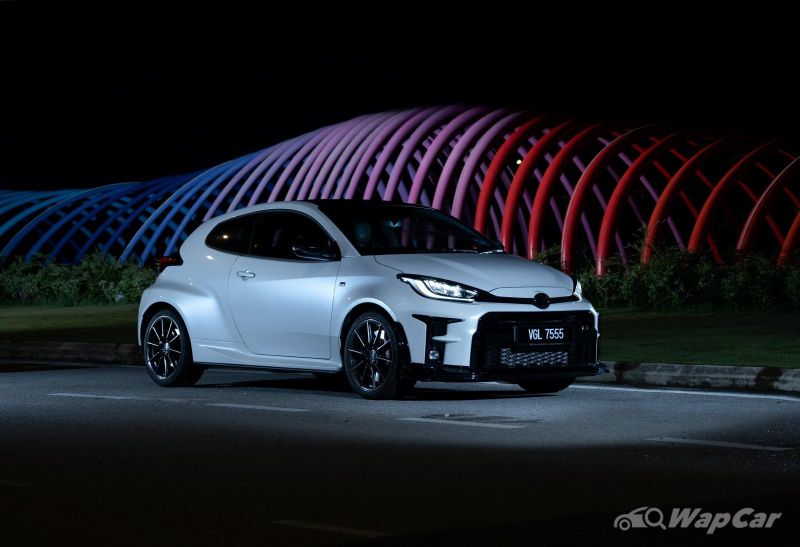 Thank you Toyoda-san, for making the GR Yaris possible. Whoever said Toyota was boring has been proven wrong by the GR Yaris.

This is the best thing to come from Toyota in a long time (yes, the GR Supra included) and the worst thing to happen to me in this field because I’ve been looking for means to get myself one of these. Now, how do I go about this NFT thing?