HomeNewsReview: Volkswagen Tiguan - Should you be brave and take this over the Honda CR-V? Review: Volkswagen Tiguan - Should you be brave and take this over the Honda CR-V? 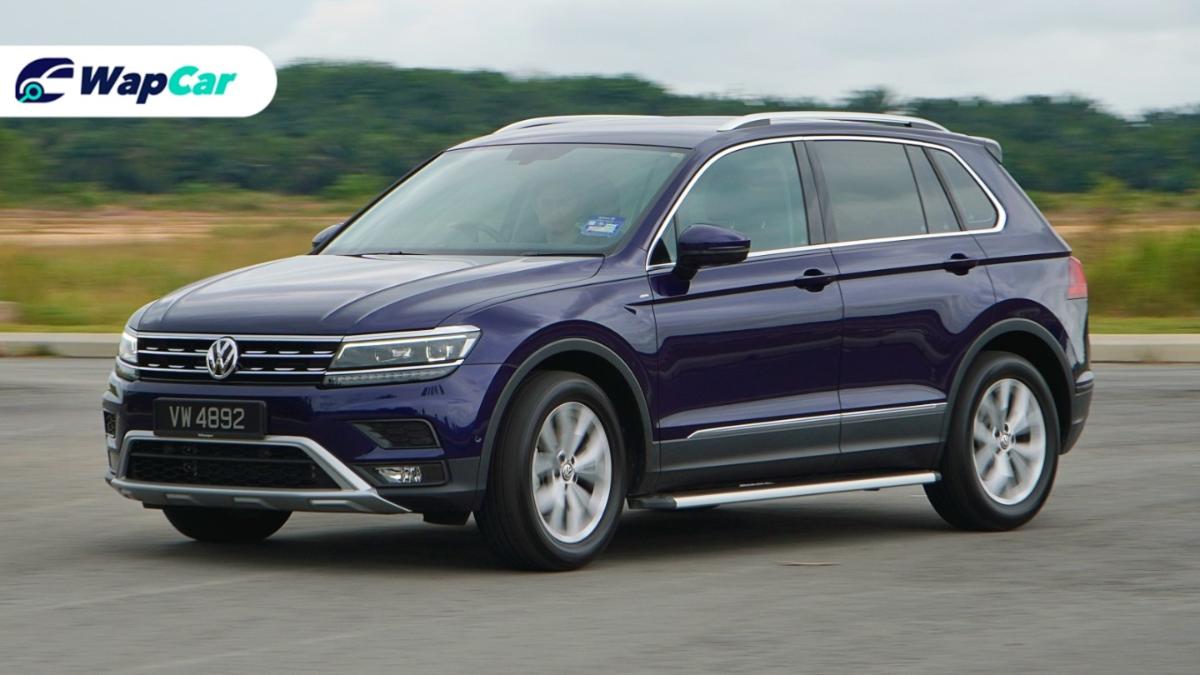 In recent years, most of Volkswagen models sold globally has been on a decline except for one particular model – the Volkswagen Tiguan. Last year, Volkswagen made 910,926 units of the Tiguan, making it the best-selling Volkswagen in 2019. 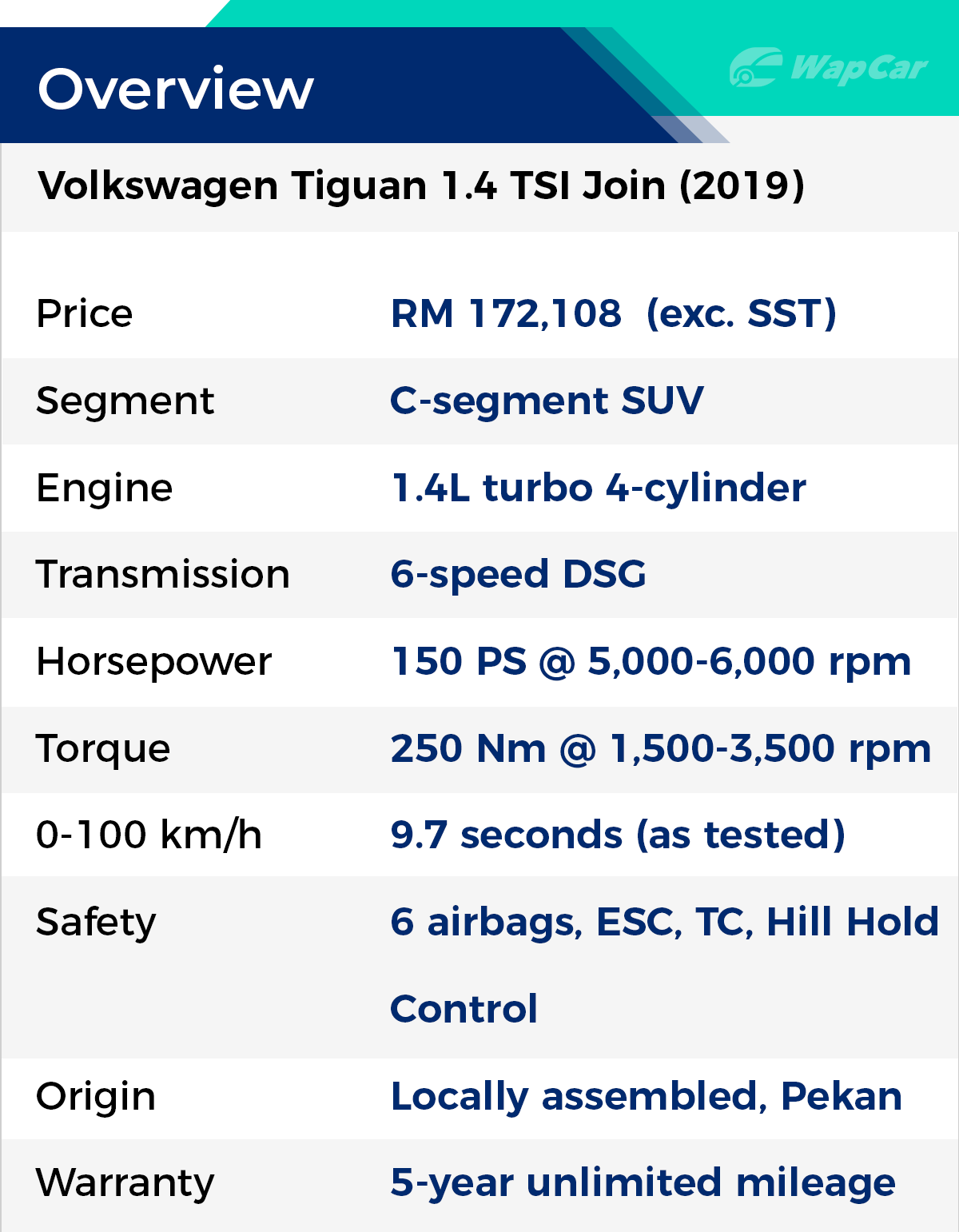 In Malaysia though, competition is tough to say the least. We have the Proton X70 offering tremendous value for money, the Honda CR-V proving itself as an all-rounder, and the Mazda CX-5 appealing to the keen drivers.

Which begs the question, where exactly does the Volkswagen Tiguan fit? It's actually right in between all of the 3 SUVs mentioned above, of which we'll get into shortly. 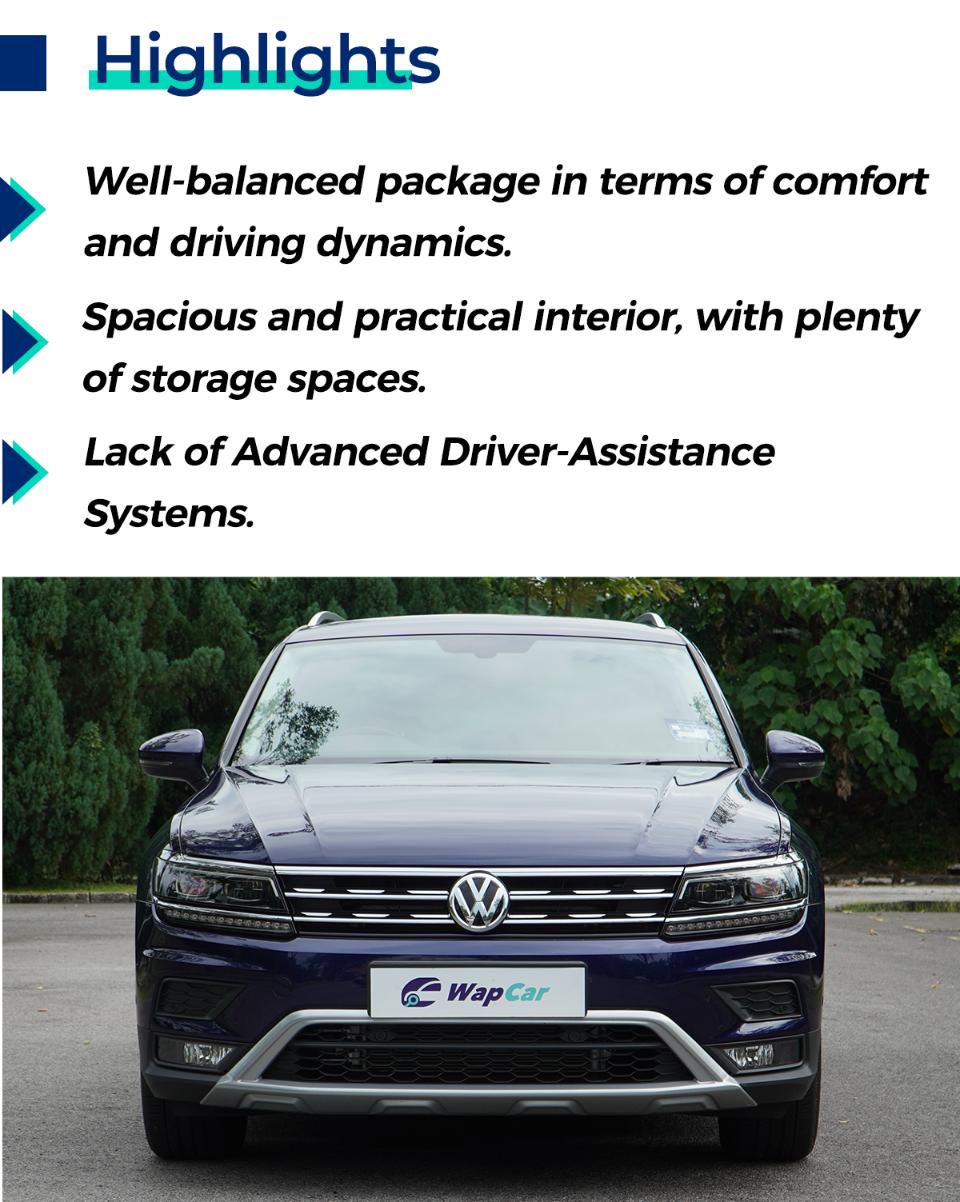 The model we have here is the Volkswagen Tiguan 1.4 TSI Join variant. It's essentially a Highline with a few exterior add-ons, which are the silver bits at the front bumper, the black rear spoiler, chrome garnish on the boot and exhaust tips, load lip protector, aluminium side steps and VW tints. 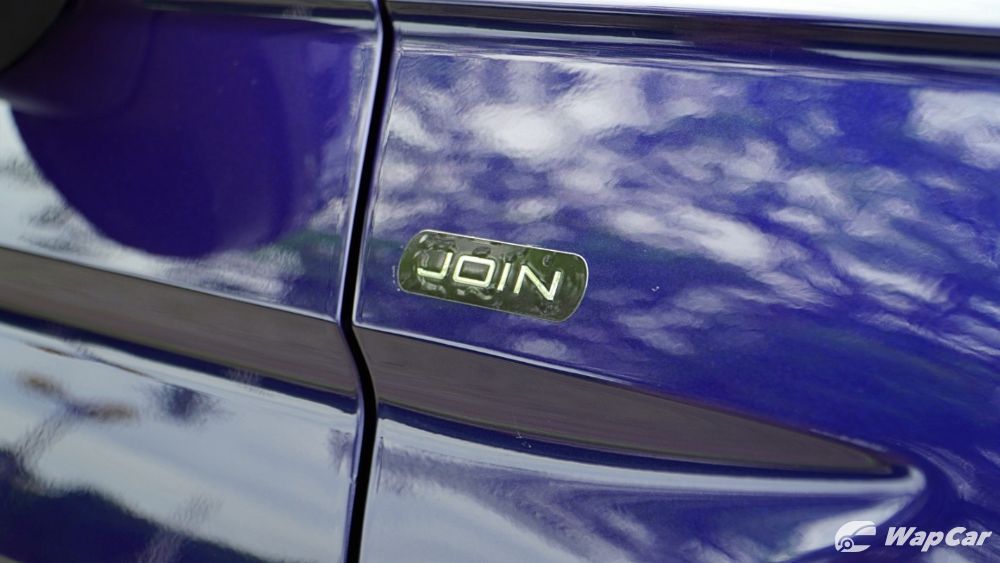 While I can appreciate the look of the exterior trims, I would just go for the Highline and skip all the additional bits and bobs. 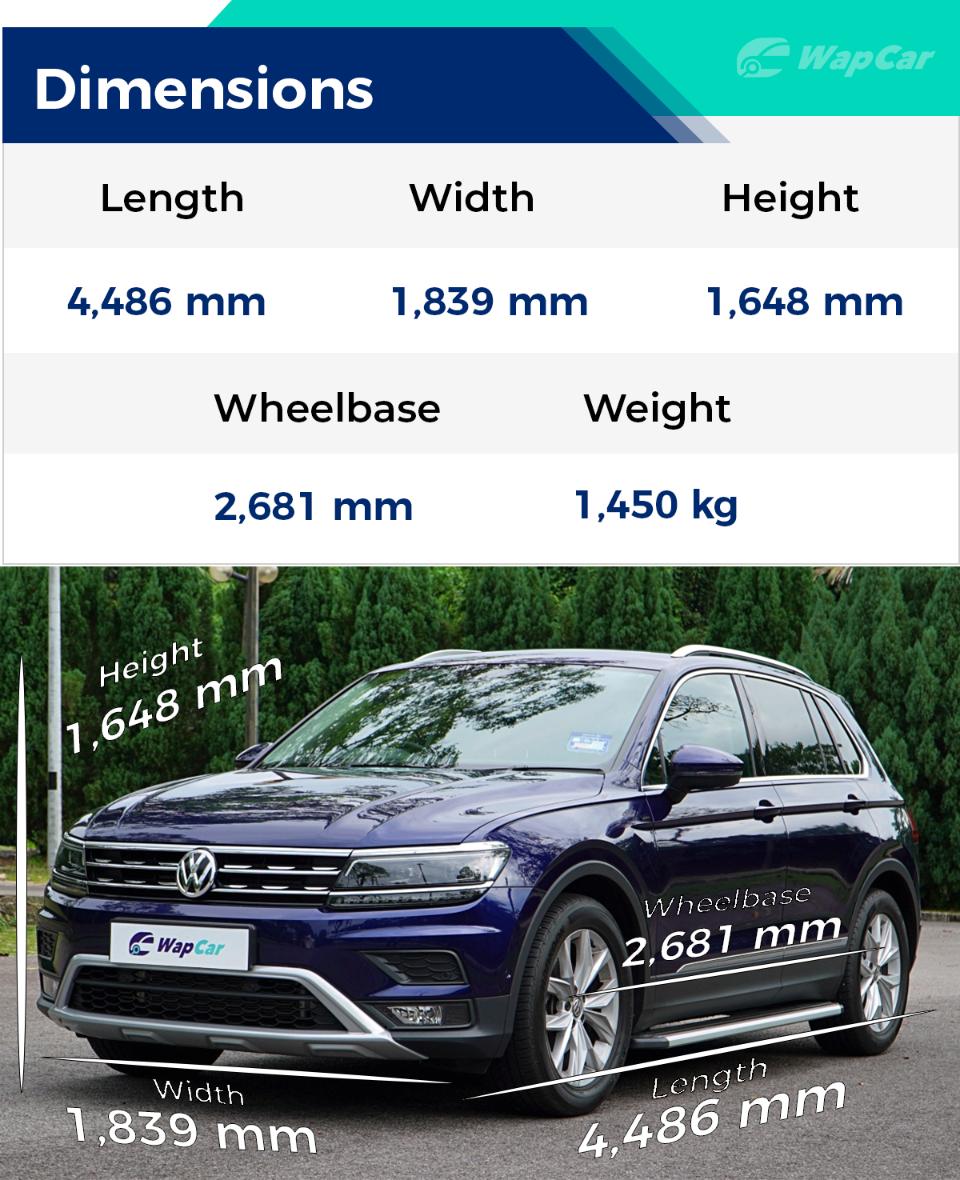 As for the overall design, it's conservative as with most Volkswagen models. None of the flair you get from a Peugeot 3008 for example. Which may not be a bad thing per se, some might prefer to be in something more discrete. 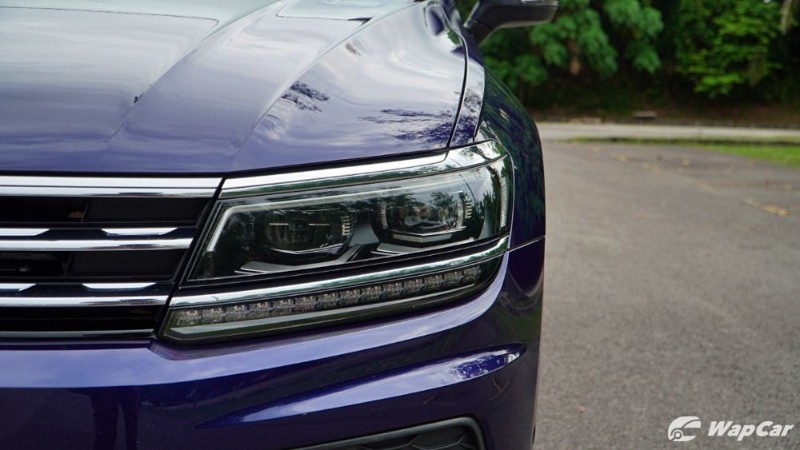 The Adaptive LED headlights works well, giving the full beam when there are no cars in front and quickly dips otherwise. It swivels according to the steering input and the static cornering lights activates upon using the indicator. 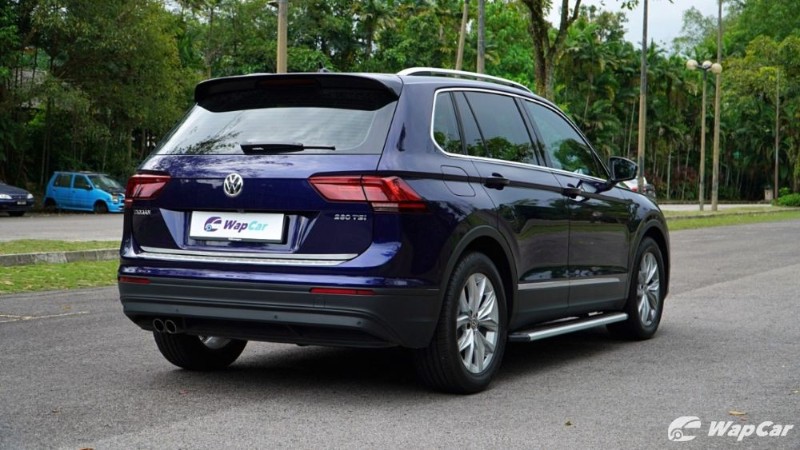 The Tiguan rides on 18-inch wheels wrapped with 235/55 R18 tyres. They look just about right in terms of size. In the rear, it was updated last year with the rather attractive full-LED taillamps. 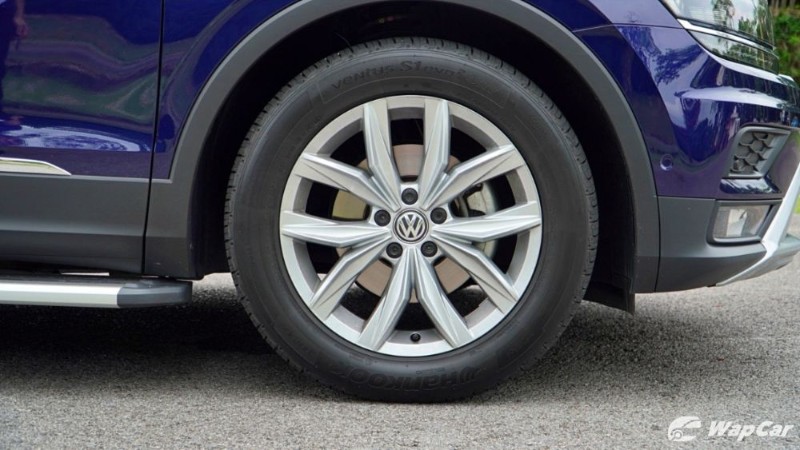 Paint thickness averaged in the 110s of μm while panel gaps averaged about 4.0 mm, and deviated by no more than 1.0 mm from each side. 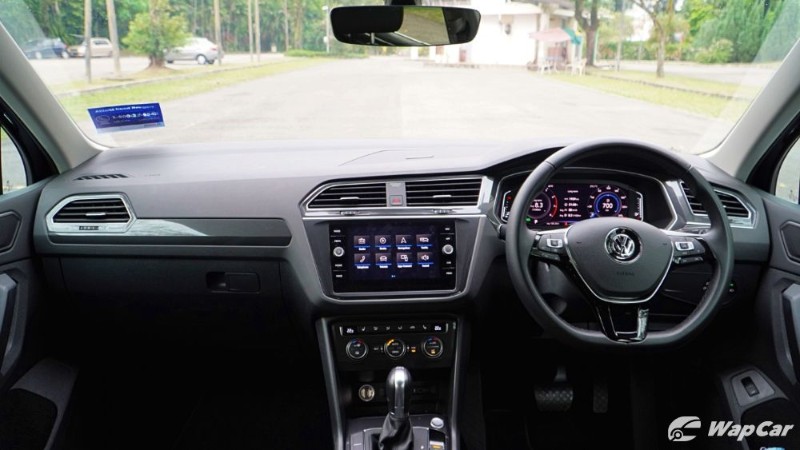 Volkswagen has done well in maximizing the interior space. The cabin feels airy and there are plenty of storage spaces. 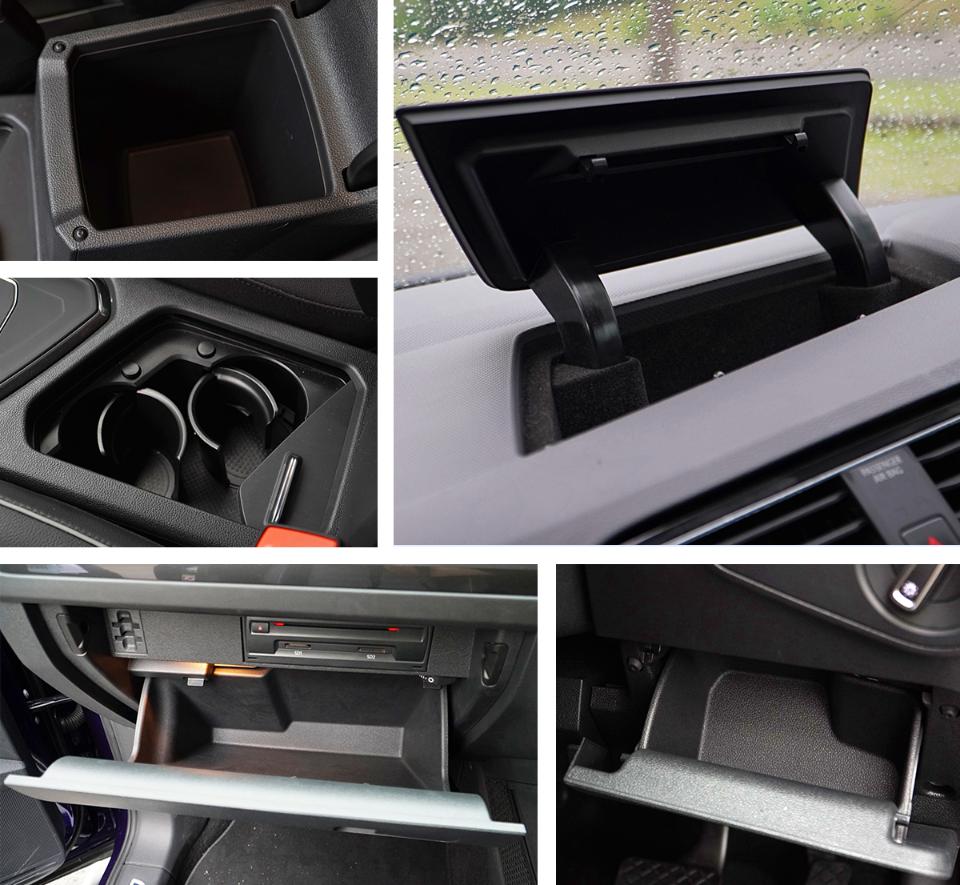 There's a pocket below the headlight switch, a compartment on top of the dashboard, a slot below the 12V socket and USB ports, centre console with retractable cupholders, and a decent-sized centre box. 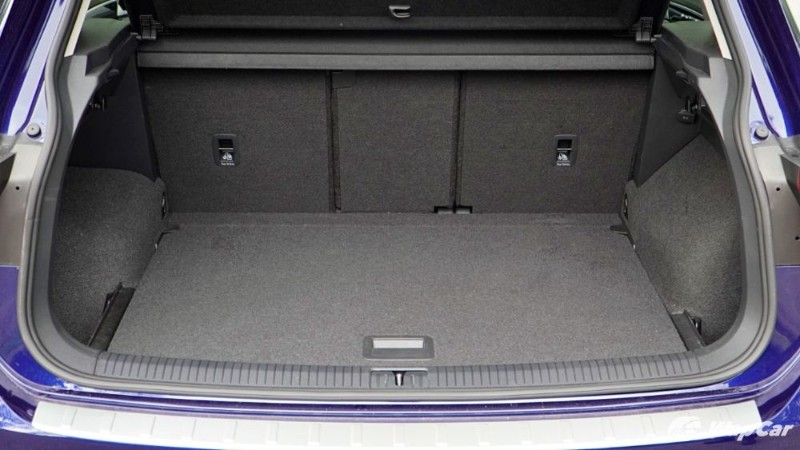 Ergonomics is also great. Every button is logically laid out and positioned. It's a German car, they probably had several meetings to decide where to place the central locking buttons. 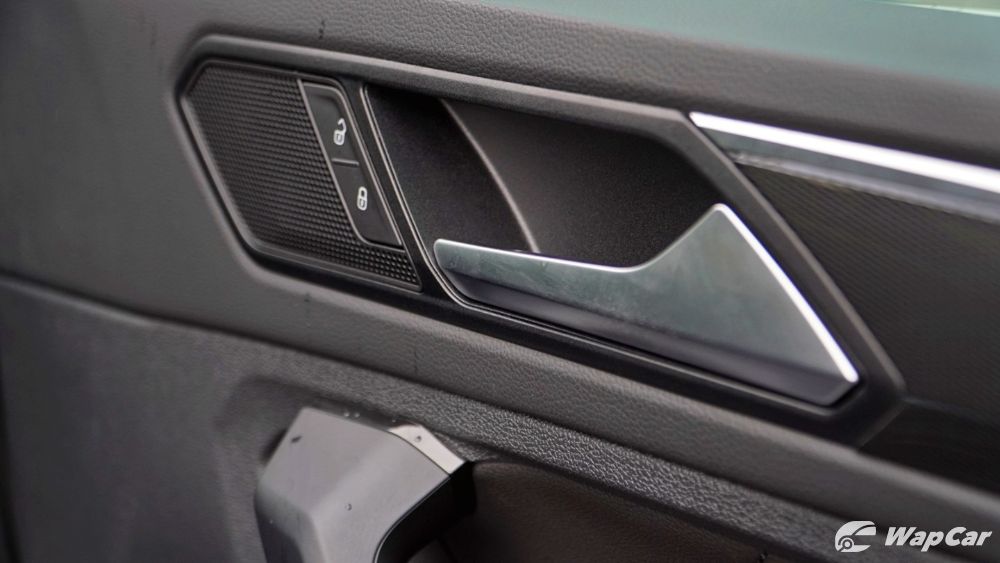 There are plenty of adjustments for the driver's seat and steering wheel for drivers of any size to get comfortable behind the wheel. Speaking of the driver's seat, it gets 12-way power adjustment with 4-way lumbar support. Front passenger seat is manual though. 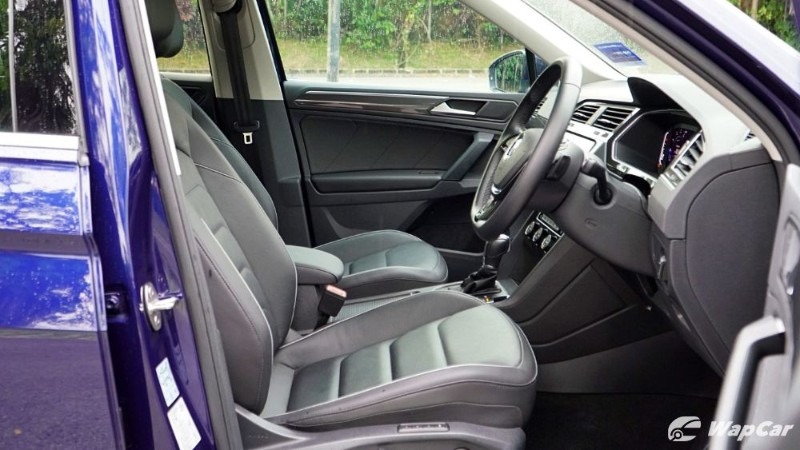 Space in the rear is about average in its segment. Kneeroom is no match for the Honda CR-V, but more than the Mazda CX-5. There's plenty of space in the footwell and the rear passengers can slide their feet underneath the front seats. 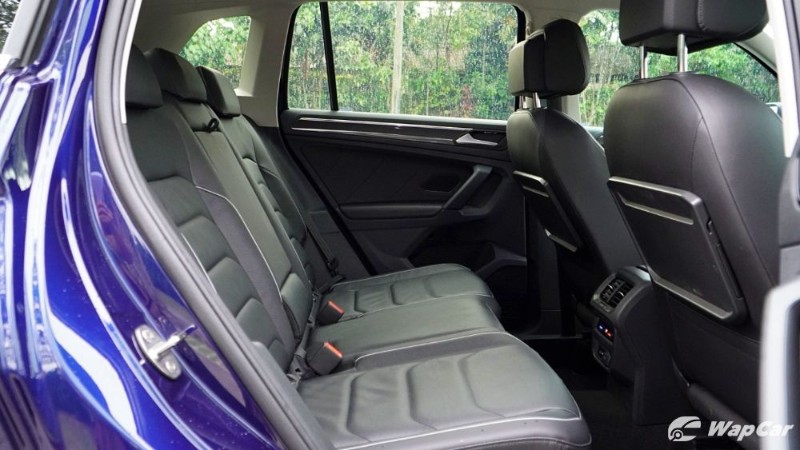 There's an air of calmness in the way the Tiguan drives. It settles quickly to the rhythm of highways and will comfortably cruise at our national speed limit all day long.

And yet when it exits the highway and enters any backroads, it tackles the twisty bits with a sense of agility and body control that is rather impressive for an SUV. 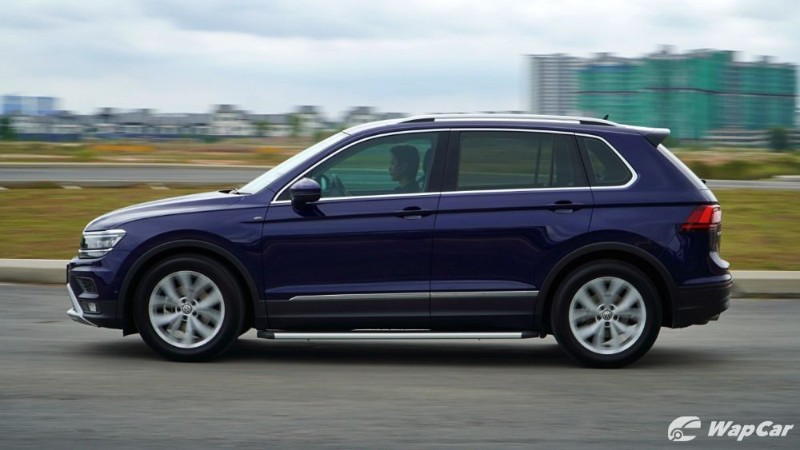 Perhaps the only niggle I have with how the Volkswagen Tiguan drives is the delayed response of the powertrain. The transmission would hesitate to shift down a gear upon throttle depression and when it finally does, there is noticeable lag for the turbo to spool up.

Once the turbo comes on song, it provides a decent shove and picks up speed briskly. The wet type dual-clutch transmission (DSG) shifts imperceptibly in the background and more impressively, it works smoothly even in traffic with minimal judders. 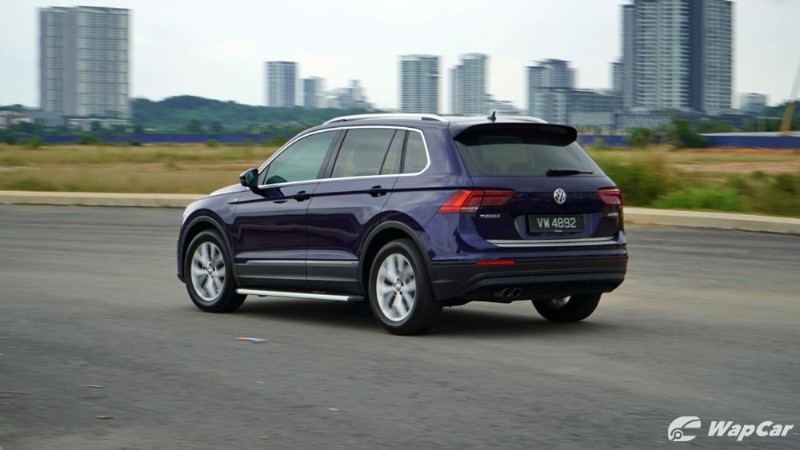 Visibility is great all-round and corners of the car are easy to judge. Steering is light at all speeds and the brakes offer excellent feel and bites progressively. It's a breeze to drive the Volkswagen Tiguan daily. 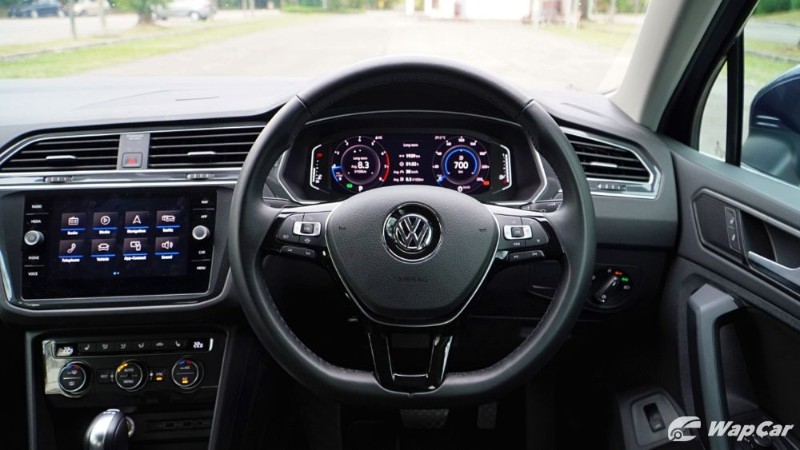 However, the Volkswagen Tiguan has no ADAS. Not even a blind spot monitor. In this day and age, one would expect at least autonomous emergency braking to be featured. For some, this could be a deal breaker. 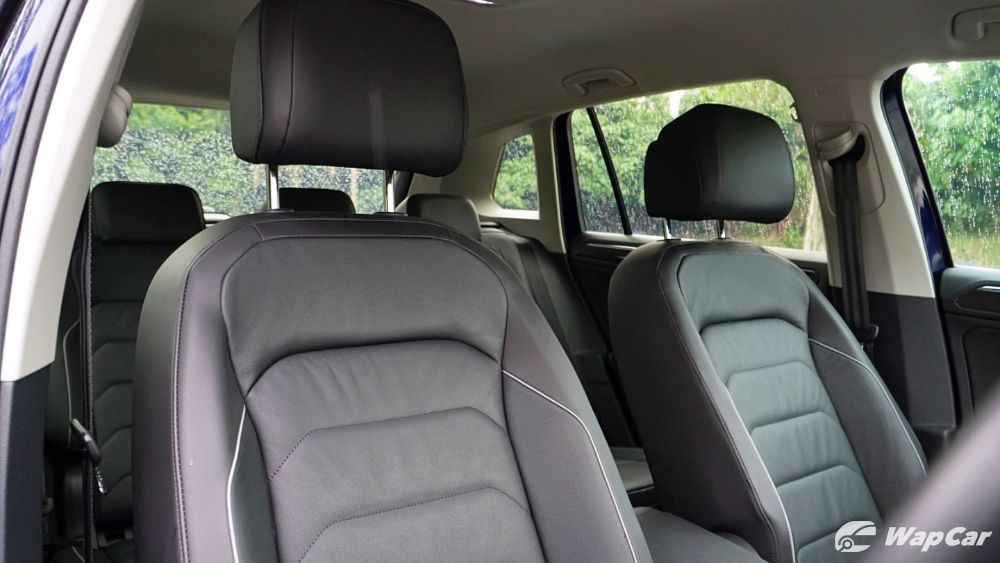 Like most Volkswagens, the ride is characteristically firm. It settles quickly over bumps and gives a solid thud over smaller potholes. Keyword here is smaller. Over larger potholes or sharp bumps, it can be jarring.

But for the most part, it remains composed. The suspension deals with highway undulations like it was made for them. Combine that with the turbocharged engine, the Volkswagen Tiguan effortlessly chews up the kilometers. 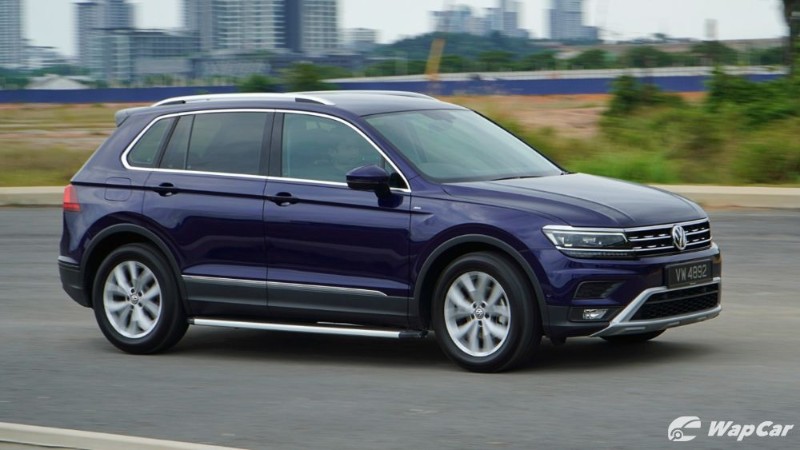 The front seats are not as soft and cozy like in the Toyota RAV4, they're firmer but still comfortable and hugs around the body. The rear seats are able to recline slightly for a more relaxed posture and the seat base offers decent thigh support. 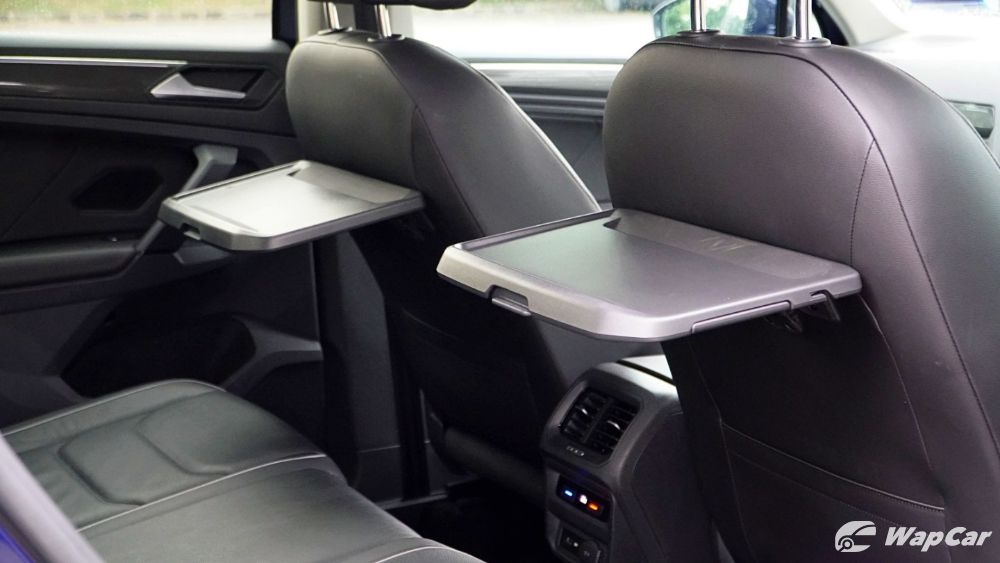 Tyre and engine noise are well suppressed at all speeds. Wind noise does creep into the cabin once it reaches our national speed limit, but that is the norm with most SUVs. At 110 km/h, the decibel meter recorded an average of 68 dB. 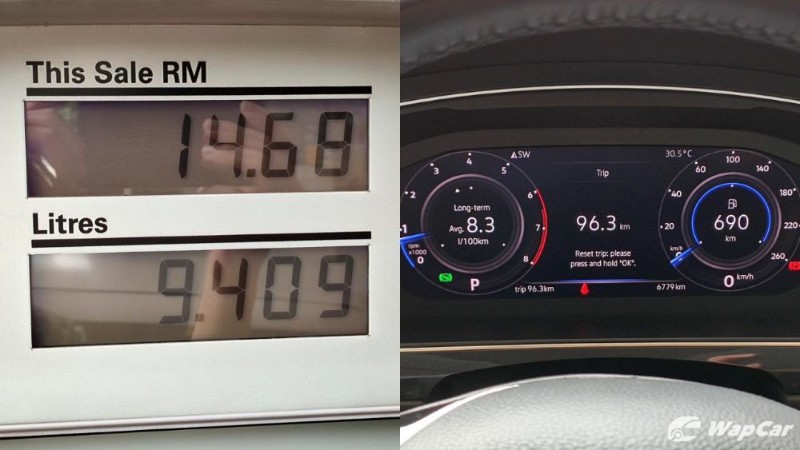 After clocking 96.3 km of 50/50 highway and city driving, the amount of fuel required to brim the tank was 9.4 litres. The fuel consumption figure works out to 9.8-litre/100 km. Although the trip computer showed an average of 8.3-litre/100 km. 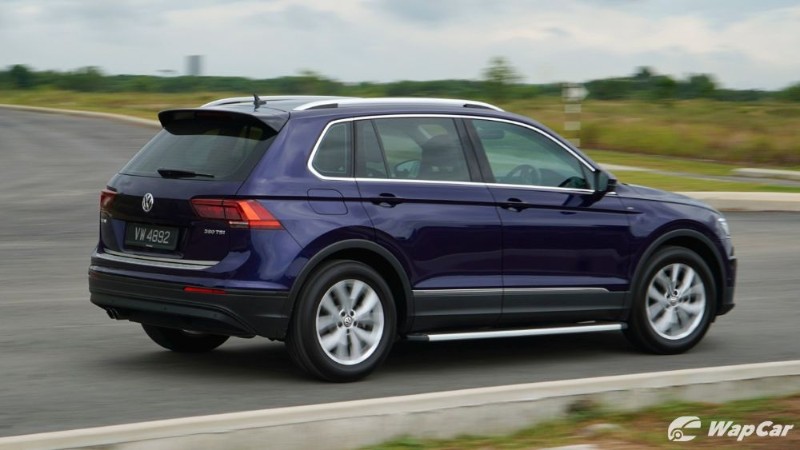 The Volkswagen Tiguan is a well-balanced package. It blends the cruising ability of the Proton X70, some of the Mazda CX-5's agility, and a hint of the Honda CR-V's space and practicality. 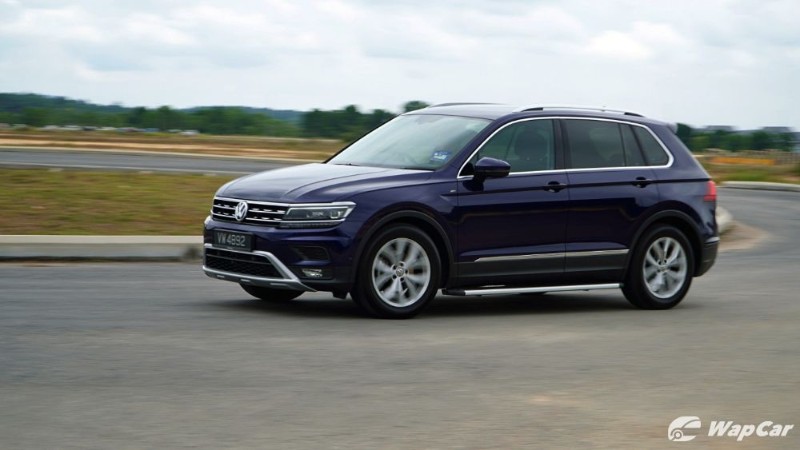 Its reputation aside, the biggest issue with the Volkswagen Tiguan is the lack of ADAS, which is present in all of its main rivals. At this price point (RM 172,108 for Join, RM 162,108 for Highline), it's a potentially a deal breaker.

Which is a shame because I genuinely like the Volkswagen Tiguan. It's a great companion for both daily and long-distance drives. Plus, when the roads get interesting, it tackles them with confidence. The same can't be said about the Honda CR-V. 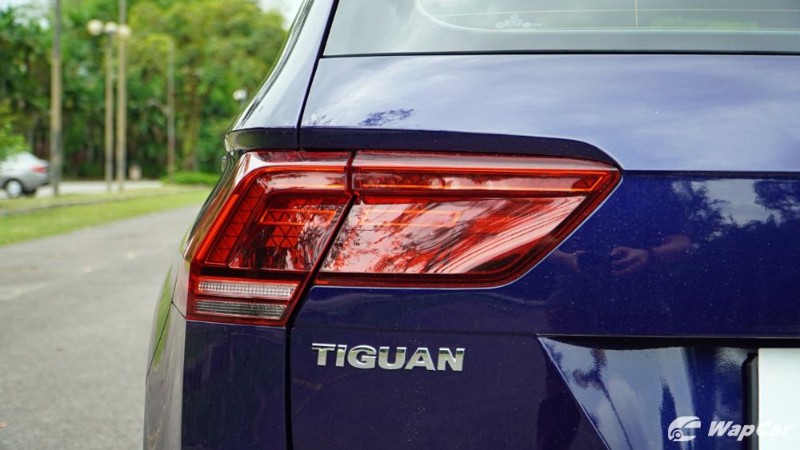 If the Volkswagen Tiguan were to feature the complete suite of ADAS at a similar price, it would be an even more convincing all-round package than the Honda CR-V. Which at the moment, is still the more logical choice.

Unless of course, you can accept the omission of said features, then the Volkswagen Tiguan could be the perfect car for you. In that case, Volkswagen Passenger Cars Malaysia is offering the Tiguan with six months of free instalment, saving you over RM 9,000. Customers who placed their orders on Volkswagen's e-showroom will get an additional RM 4,000 rebate.