HomeNewsStuck at home during MCO? Here’s a list of awesome car movies to binge on!

Stuck at home during MCO? Here’s a list of awesome car movies to binge on! 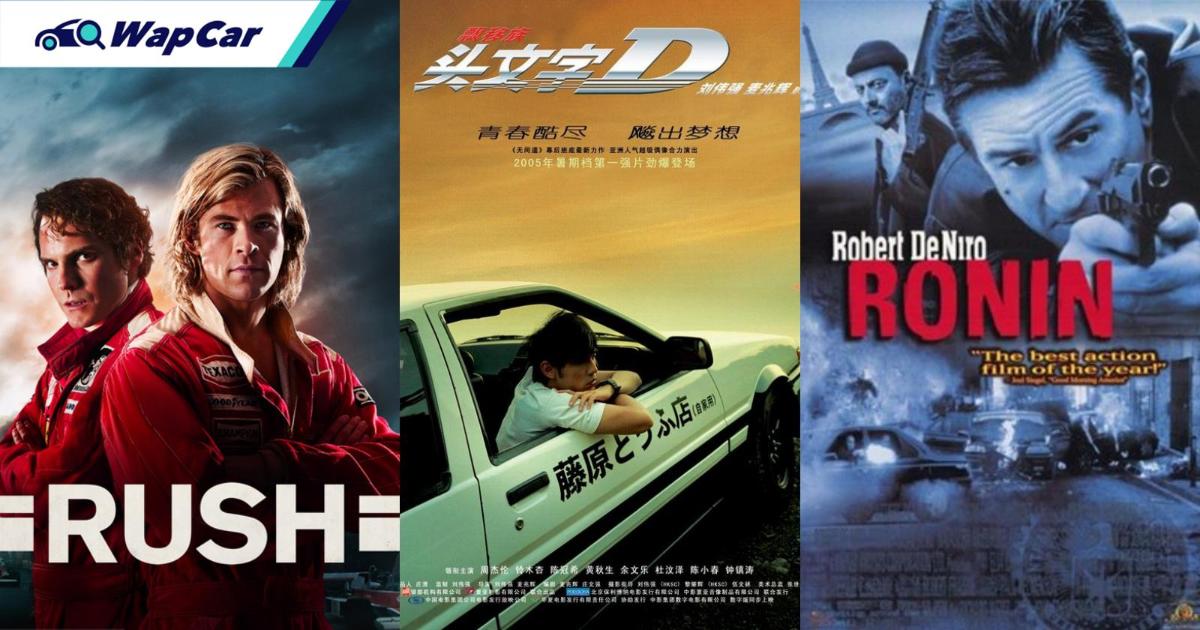 In case you missed it, the whole of Malaysia except Sarawak will be observing the Movement Control Order (MCO) until 4 February 2021. While we can’t show our love for our cars by driving them, we can always sooth our souls with some car related action movies. Here’s a list of car movies that you can binge on during the lockdown!

The rather mainstream films (No Fast and Furious movies included)

If you’re looking for something to kick start your weekend, then Need for Speed is the simple but still entertaining movie you should tune into. Though it does involve extreme car stunts (at least not the level of F&F), it's a movie that you can just relax and watch without cracking your brains after a long week at work. Plus you also get to feast your eyes on a Shelby Mustang.

The movie inspired by the fierce rivalry between Formula 1 legends James Hunt and Niki Lauda became a classic the moment it was premiered back in 2013. Lauda himself even had a few good words to spare for the movie though he still firmly believed that his rivalry with Hunt back then wasn’t anything to note of. We beg to differ.

This movie needs no introduction, we’re sure that the story is still fresh in the minds of those who watched it when it was first released. But for the sake of those who haven’t yet caught the movie (gasp), Ford vs Ferrari revolves around legendary engine tuner, Carroll Shelby, and race car driver, Ken Miles, as they work to develop the Ford GT40.

Other than a list of iconic retro songs from the ‘70s, Baby Driver, in our opinions, is one of the best heist films that was released in recent years. The street racing stunts also received a thumbs up from Daniel Ricciardo!

To be fair, this movie doesn’t really focus on cars. But who could forget that 3,000 PS behemoth of a truck that Charlize Theron piloted throughout the show? Or the Coma-Doof Warrior and his flame throwing guitar atop a vehicle made out of speakers?

Just in case you need to spend quality time with the kids, here’s our favourite car cartoon. Some even suspect that the street race around London in Cars 2 is the inspiration behind F1’s former supremo, Bernie Ecclestone’s, “brilliant” idea of an F1 street race in London.

The Art of Racing in the Rain

Break out those tissue papers as this is a tear-jerker of a movie told by a dog named Enzo. Yes, he’s named after Enzo Ferrari. The story revolves around Enzo’s master Denny and his journey to becoming a successful race car driver for the Scuderia Ferrari F1 team.

Depending on whether you want to watch the original Italian Job filmed in the ‘60s or the modern version that involved a bunch of MINIs put back into their rallying I-can-squeeze-into-anything roots, the Italian Job is one legendary heist movie that needs to be re-watched again!

Who could forget that moment when Will Smith was told to “shut up and let him drive”? Bad Boys is yet another throwback movie that we think should be added into your binge watch list!

How can we miss out Ronin? This classic movie has one of the most intense car chases of its time around the iconic landmarks of France. And how long has it been since you’ve seen a Peugeot in action?

Heist movie lovers would remember this one and if you haven’t re-watched this in a while, then we suggest adding this to your binge watch list! If you’re a classic car lover, then this movie is a must-watch!

So far, we have a bunch of heist films and only one dystopian movie centred around cars, here’s another one to add to the list. Think of Death Race as a Hunger Games-esque story with a focus on cars instead. Death Race is a combat race series on the internet that pits inmates of a private prison at each other for entertainment.

Looking for something more comedic? This sports comedy film starring Will Ferrell might give your stomach stitches some exercise. And to add on to the humour, remember to watch what Daniel Ricciardo has to say about some specific scenes here.

How can we not list the movie that inspired this article? The movie premiered back in 2005 has become a classic for fans of the manga and the arcade game alike. But just make sure to watch this in the original Cantonese language with subtitles as the English dubbed versions totally ruined the movie. Did you know that in Malaysia someone has opened a “tofu shop” Initial D café in Subang and Ipoh?

This 1995 film from Hong Kong stars the Mitsubishi Lancer Evolution III and the Mitsubishi GTO in all their glory! And piloted by someone called Jackie Chan. The complicated plotline involves a lot of high-speed car chases, official and illegal street racing all thrown into one. Let’s face it, they don’t make canto-movies like that anymore.

The Legend of Speed II

Yet another Hong Kong movie that involved high-speed street racing with 2 legendary Japanese rally cars. The movie was made at the peak of the Subaru Impreza WRX and Mitsubishi Lancer Evolution rivalry, so if you're a fan of both cars, you won't want to miss this movie!

Did you think we’re going to limit the list to international films? Though the movie is about tracking down drug lords in Malaysia, there’s no denying the movie is a car-centric movie. Observe that suave-looking Mitsubishi Evo at the start of the film and car chase scenes.

Evolusi KL Drift is probably the local movie that set the tone for Malaysia’s car chase and action movie future. Inspired by The Fast and the Furious: Tokyo Drift, this 2008 action movie involved professional drifters trying to combat the sale of drugs on their turf.

Similar to Talladega Nights, this French movie is designed more to tickle your funny bone then to twist your minds. Though the story isn’t much to go about, at least the car scenes are more realistic then Fast and Furious.

If you want more Initial D-like film, then Norwegian film Borning is your answer. The movie revolves around car enthusiast and racer Roy who finds himself facing a need to defend his honour in what might be a deadly race.

Make sure to type in the word “French” when you’re searching up the movie because it is the French version that you want to watch. Think of this as a cross of Fast and Furious with Race to Witch Mountain and throw in a bumbling police officer in the mix.

No, not the one that stars Scott Eastwood and Ana de Armas, though if you want to add that to your list go on ahead! The Over Drive we’re talking about is the one adapted from the Japanese Manga that evolves around a rallying team trying to make their way into WRC. We can’t help but applaud the movie for its accuracy to real-life events!

JDM lovers, this one’s for you guys! This classic series of movies revolve around illegal highway racing in Japan. There are 6 films in total released from 1988 to 1996 and stars all the most iconic JDM models that we’ve probably plastered on our walls or our desktop backgrounds before. The series of movies is also believed to be the inspiration behind how Fast and Furious came about.

Documentaries for the mindful souls

There are plenty of documentaries out there about Formula 1 or even Formula 1 drivers, but rarely do you get to see documentaries about the touring car series. BMW is indeed the “Ferrari” in Touring Car championships and Adrenalin tells the story of the team’s achievements in the sport dating back to the 1960s!

Too Fast to Race

If you’re a fan of classic Group B rallying, then you’re going to love this documentary. For those who don’t know, Group B rallying was introduced by the FIA back in 1982 and involved any bonkers cars that can blow the lid off anything. The rally was quickly cancelled after 4 years due to too many fatalities. 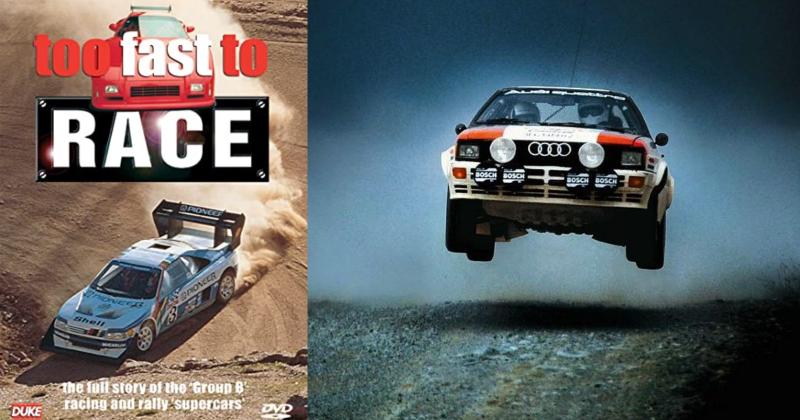 As the title says it, the documentary depicts the life and death of Brazilian motor-racing champion Ayrton Senna and his rivalry with Formula 1 driver Alain Prost. You’ll probably need a tissue ready for this.

If you’re one to prefer a series rather than a 2-hour long movie, then we suggest this reality show. The show is named after the drifting course where 28 international competitors compete to be declared the Hyperdrive champion. Sounds simple but have a look at what the drivers have to go through to be able to win the series!

If a docu-series is more your cup of tea, then you’re going to like Drive to Survive. Netflix even renewed the series for a second season so it spans 40 episodes. you’re going to be very busy catching up on every single one of them!