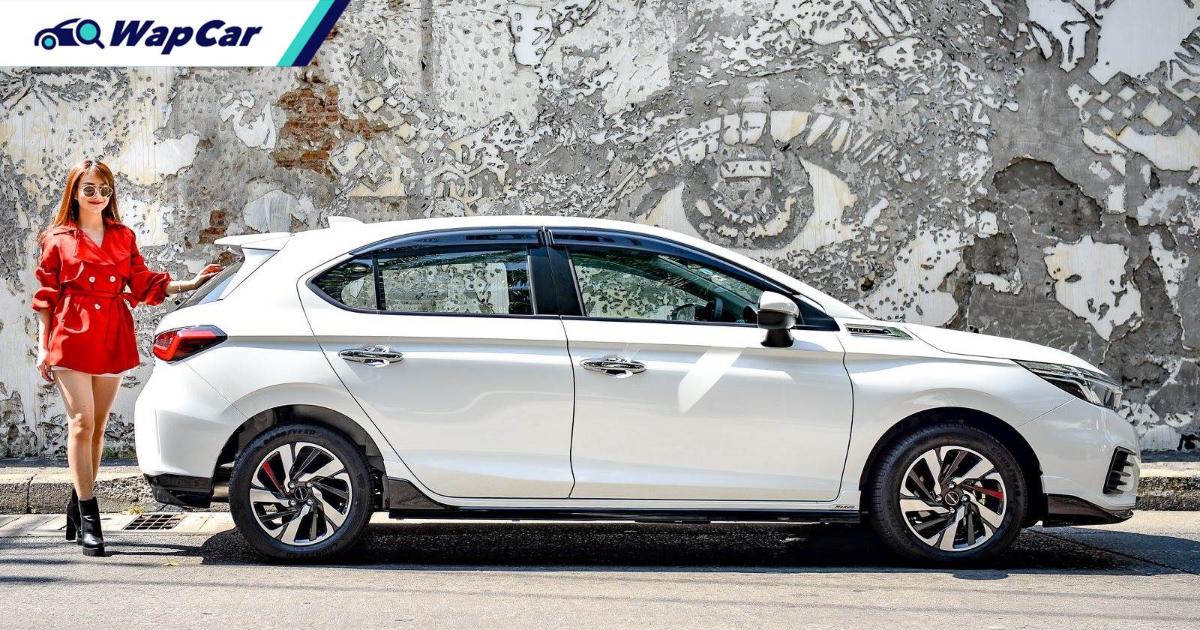 The 2021 Honda City Hatchback made its global debut less than three months ago in Thailand. Honda’s latest B-segment hatchback will replace the Honda Jazz in nearly every South East Asian market except for Singapore, and will follow a similar one model, two body styles formula used by Toyota for the Vios sedan (Yaris Ativ in Thailand) and Yaris hatchback. 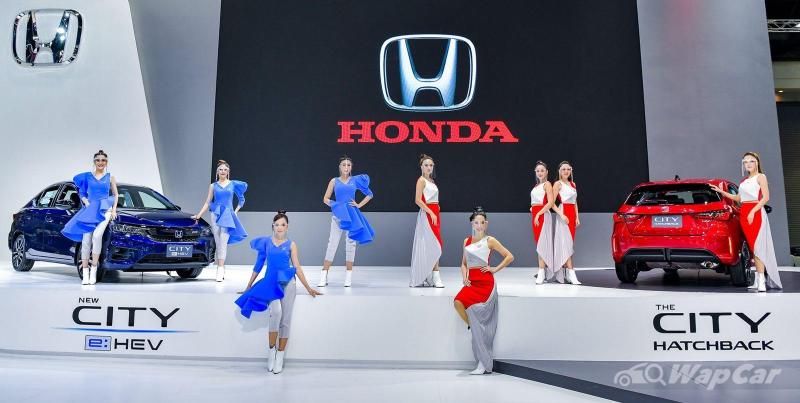 Analogous to the Toyota Yaris and Toyota Vios, the City Hatchback is visually identical with the City sedan except for its hatchback rear-end. Inside, the two City models share an identical dashboard, similar to the Vios and Yaris.

From the pictures - especially the very swag looking set of lifestyle shots - released by Honda Automobile Thailand, the City Hatchback gives off a very youthful vide that’s not quite there with its sedan sibling. 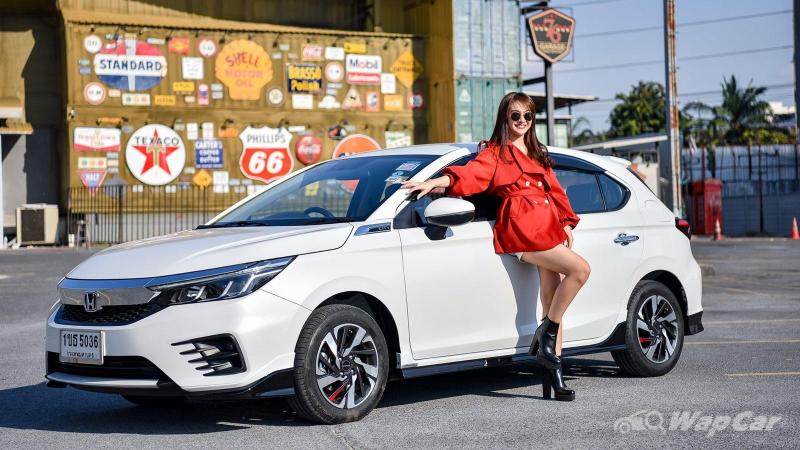 However, how pretty the City Hatchback looks is highly dependent on which angle you are viewing the car from. When viewed from the side, it looks slightly ungainly. Something just isn’t quite right about the car. 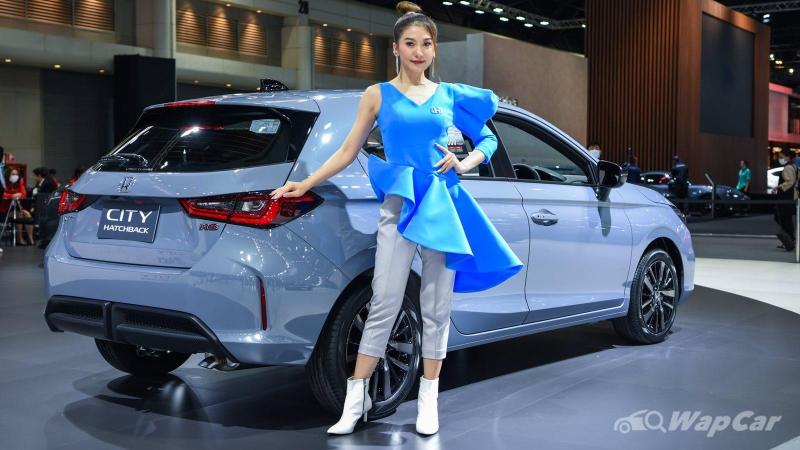 Some say the wheels are too small but that’s not true. The City Hatchback wears identical size 15- or 16-inch wheels as the City sedan and that model looks good enough from any angle.

It’s more about proportions rather than wheel size, and upsizing the wheels won’t make any difference because its proportions are also a function of the wheel arch, which you obviously can't adjust. 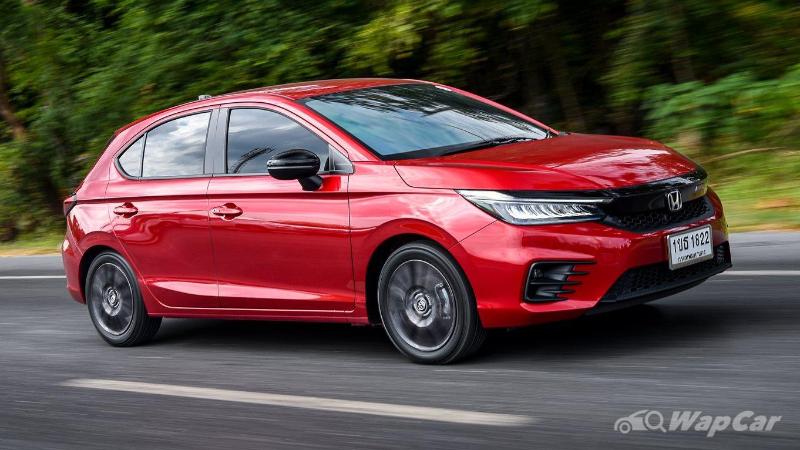 The problem is that the City Hatchback is not only 204 mm shorter than the sedan, it’s also 21 mm taller, with retaining the same 1,748 mm width and 2,589 mm wheelbase. 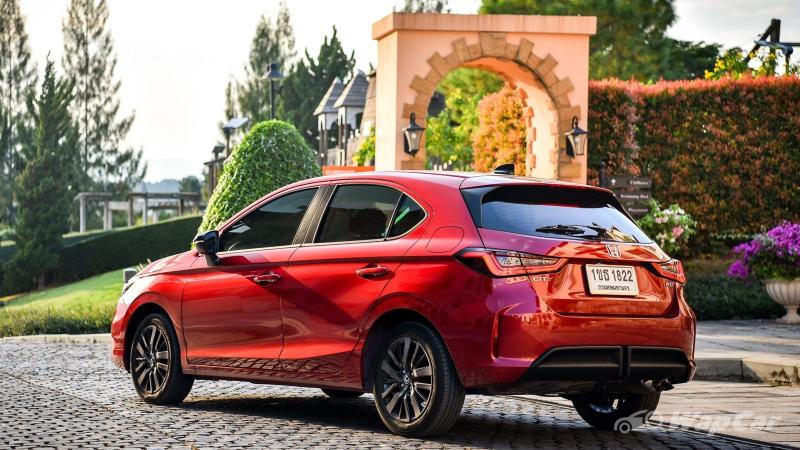 In other words, the City Hatchback has been chopped shorter lengthwise, but has had its roof pulled taller. 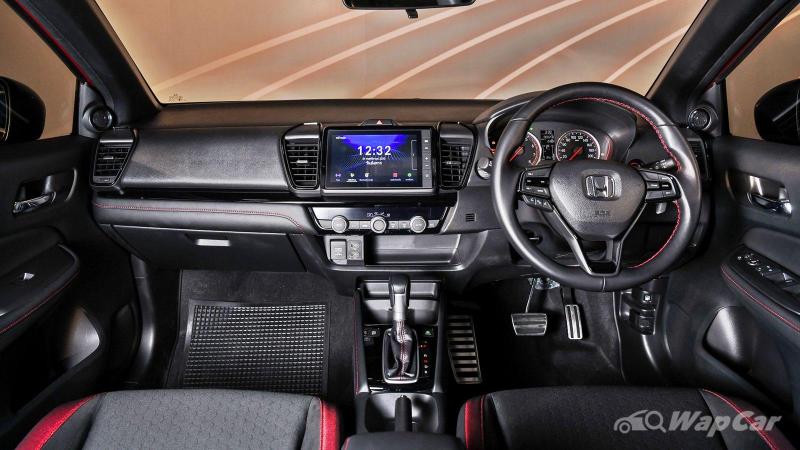 Those two actions don’t make for good design but it’s a necessary compromise if the City Hatchback is to fill up the void left behind by the super practical Honda Jazz, which unfortunately for us, the latest model’s cutesy looks just won’t work for the majority of buyers here.

In order to retain the Jazz’s Ultra Seats (now renamed as ULTR seats for the City Hatchback), and for the cabin to offer a reasonably useful space with the rear seats folded up in its Tall Mode configuration, the roof needs to be higher. 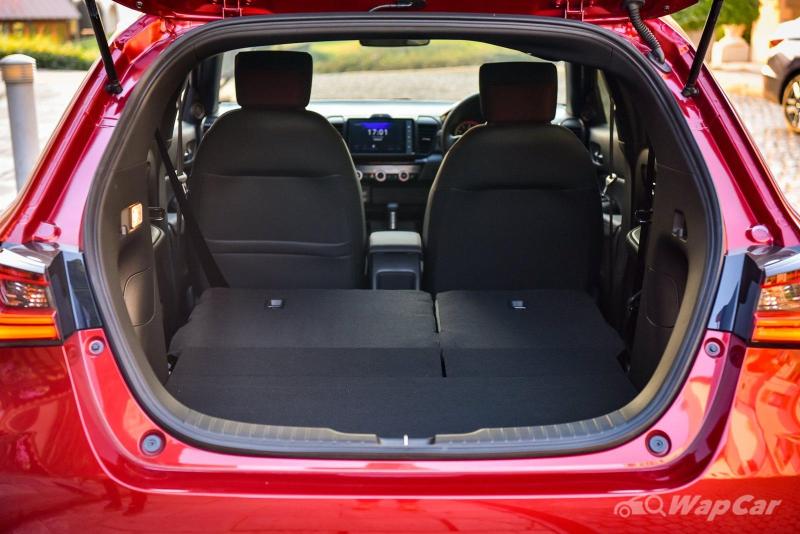 The mild re-design has succeeded in making the City Hatchback as practical as the Jazz, but in doing so, it had to violate one very crucial guideline in car design. 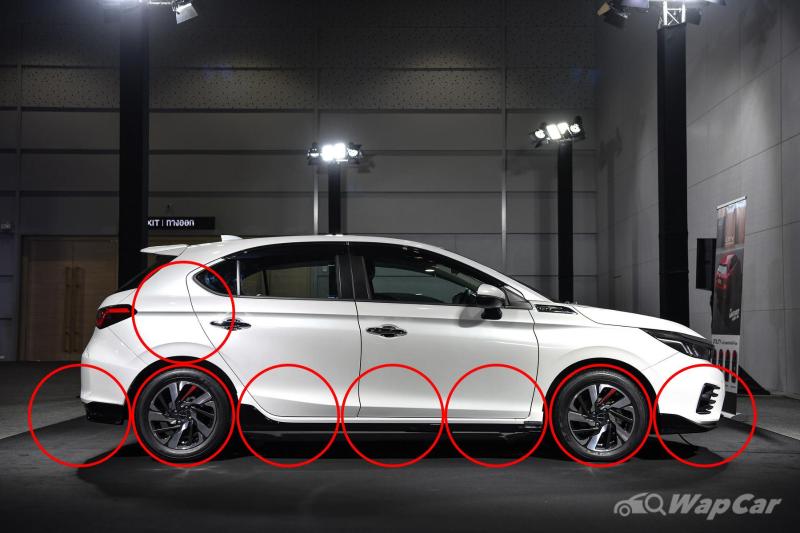 The Mercedes-Benz A-Class for example, is one of the most beautiful hatchbacks on sale today and as you can see here, part of the reason is because it rigidly adheres to the golden rule on proportions. 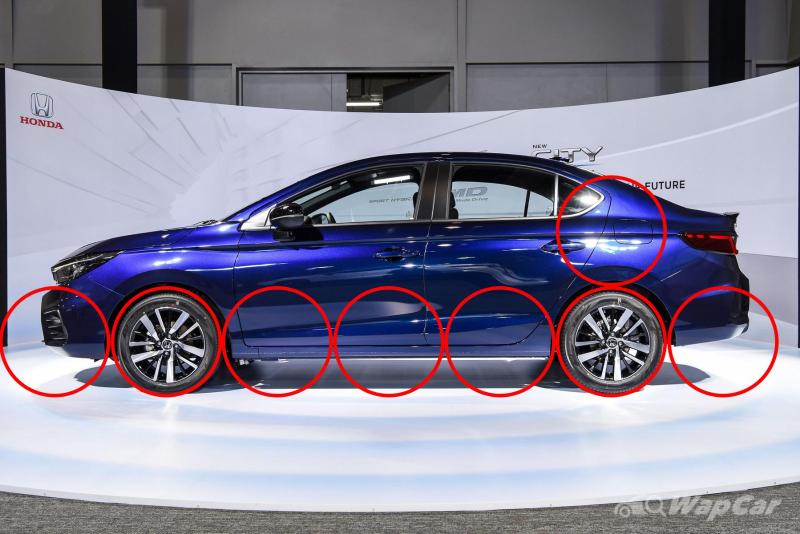 Hatchbacks, due to their shorter length, poses a particularly difficult challenge for designers to get the proportions right. Imagine an artist trying to express the same ideals on a small canvas versus a big canvas. It’s the same with cars.

But designing a nice looking car is easy. Too easy in fact. If this is the only criteria then anyone can be a car designer. Obviously reality is different.

Design is subjective and what works well in Japan won’t necessarily do well in other parts of the world. Exhibit A: Honda Fit (Jazz). It’s difficult to make a global car that works well everywhere.

Also, there are multitude of other things to consider – pedestrian crash safety, the fight over limited real estate in the engine bay by various engineering teams, consumers demand sophisticated headlamps and those things are not small (or light), production engineers will disagree if the stamping and welding required is too complex, ergonomics assessment require ease of getting in and out, outward visibility, sufficient storage space etc.

All things considered, the Honda City Hatchback strikes a good balance between style and practicality. The Toyota Yaris for example, looks better but inside, it’s nowhere near as practical. 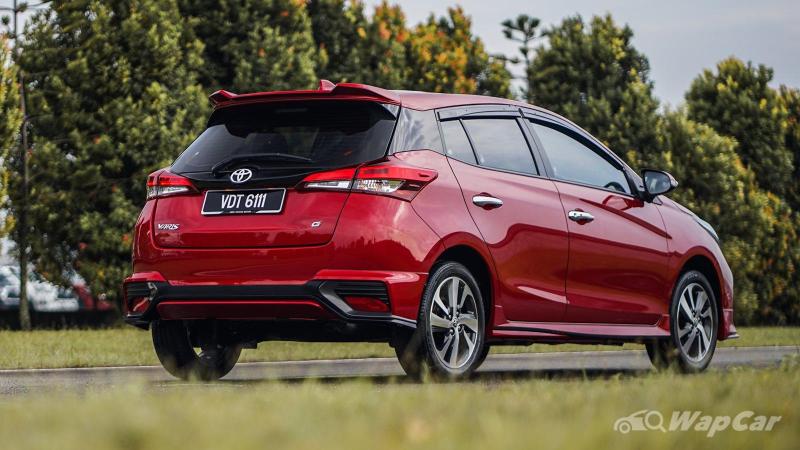 The Mercedes-Benz is the best looking but we all know how practical it inside is. The A-Class is a premium, lifestyle product. Buyers buy it for its flash appeal, not how many bags it can fit in its boot or whether it will be any useful for an Ikea run. 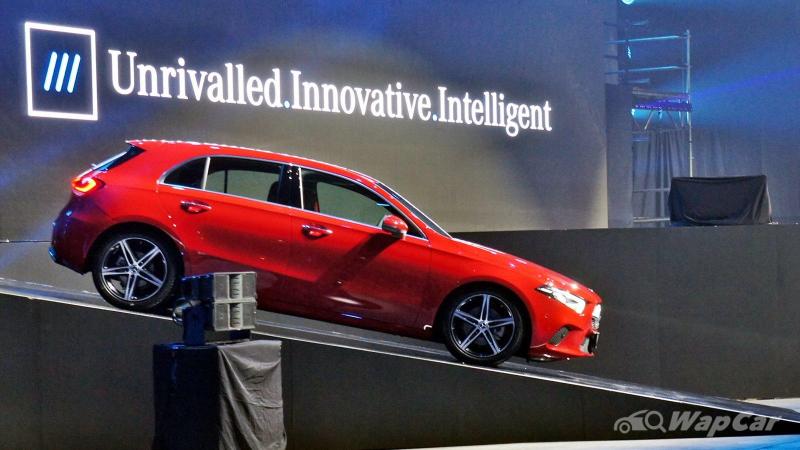 As such, Mercedes-Benz designers have greater freedom to pursue their ideals. Honda designers however, have no such freedom. Their City Hatchback needs to match the practicality of the tall-ish Jazz and that’s quite a tall order, literally.

But you know what’s surprising? The Toyota Yaris’ proportions isn’t that much better than the Jazz. There’s a reason why the Yaris’ C-pillar needs a black panel. It’s to break the visual mass, thus allowing it to escape the slightly off proportions of its side profile that plagues the City Hatchback, despite the it having a shorter wheelbase. 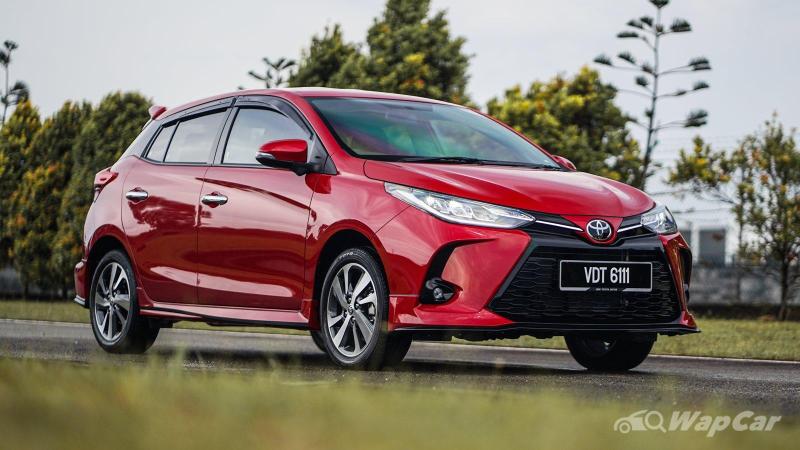 When will the Honda City Hatchback be launched in Malaysia?

The Honda City Hatchback is expected to be launched in Malaysia in the second half of 2021. It will be Honda Malaysia’s most important launch for 2021. 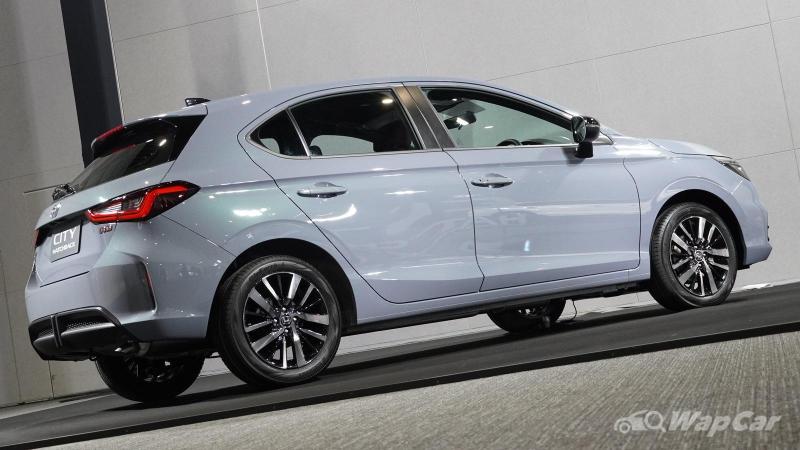 Neither companies have revealed their sales figures for individual models. The Malaysia Competition Act 2010 no longer allows the Malaysia Automotive Association to publish sales data by model, but based on data sighted by wapcar.my, the Yaris was Malaysia’s No.1 selling non-national B-segment hatchback for 2020, with a very big lead (more than 50 percent) over the Jazz. 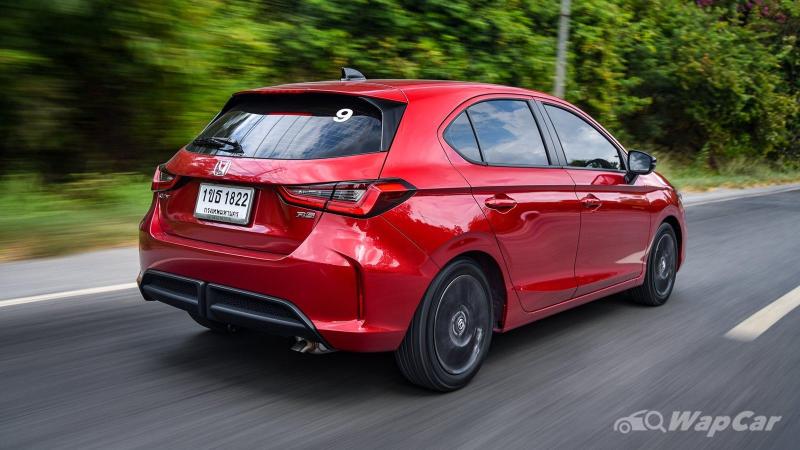 However that’s also because the Jazz is already reaching the end of its model life while the Yaris was recently updated.

What will be the price of the 2021 Honda City Hatchback?

As the City Hatchback is meant to replace the Jazz, its selling price won't deviate too far away from the outgoing Jazz's RM 72,511 to RM 84,955. 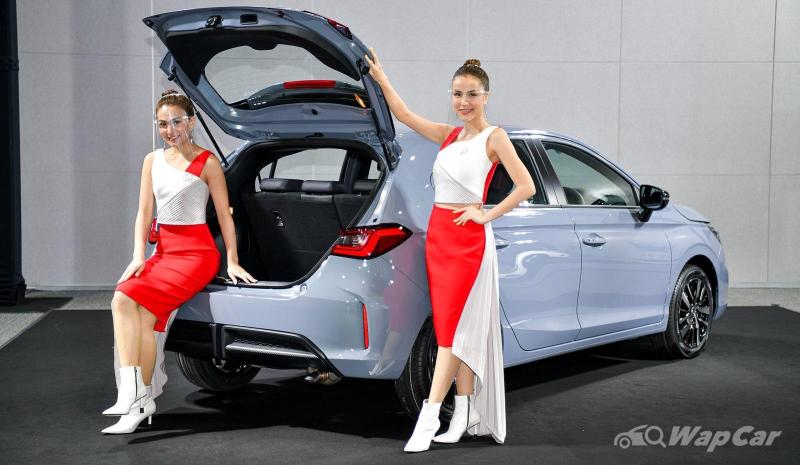 For reference, here are the selling price for Honda City sedan, Honda Jazz, Toyota Yaris, and Toyota Vios. All prices quoted are inclusive of SST exemption, valid until 30-June 2021.