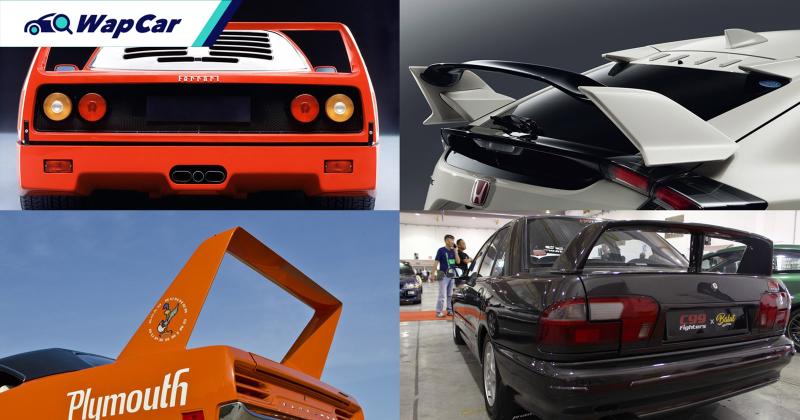 Well, that's a definition we can live by and the wing is one of those tools that many car fanboys love to show off thinking it makes their car faster. But those who have a much more mature taste in cars would agree that a wing can improve a car’s aerodynamics.

If done properly, they make the car look cool, otherwise, it’s just an expensive table to put your Maggi cup noodles after a night of touge runs up and down Ulu Yam. These 10 are what we think are the coolest and most iconic wings ever placed on a production car. 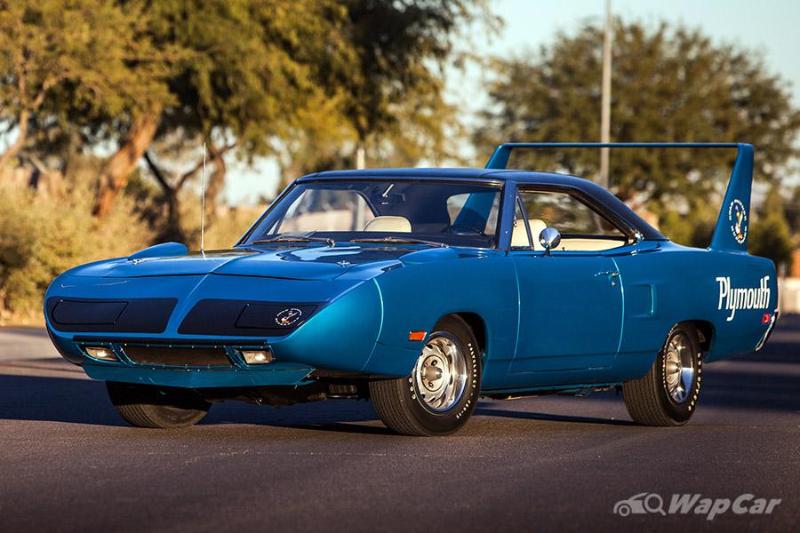 NASCAR in the 1960s was surprisingly technologically advanced despite its redneck roots. None could define the era as much as the Aero Warriors of 1969 and 1970 with the most infamous one being the Plymouth Superbird. 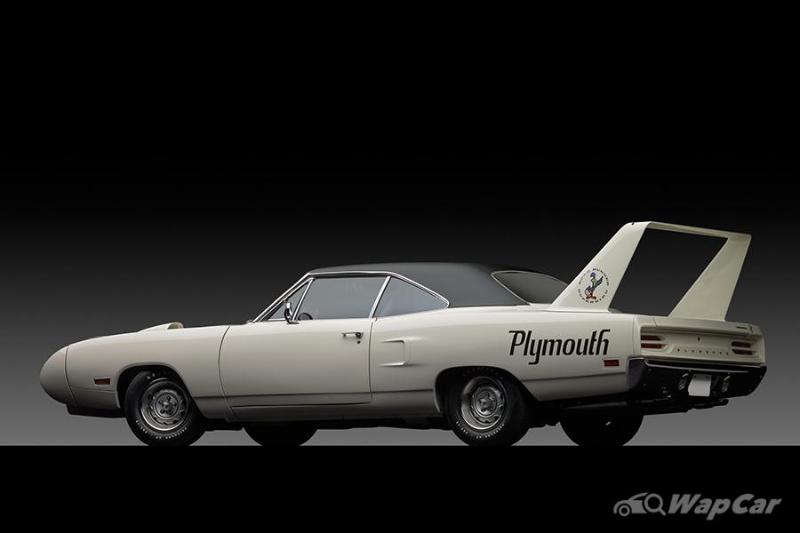 The Superbird and its sister car, the Dodge Charger Daytona were the first American cars to be designed aerodynamically using a wind tunnel and computer analysis. The result is a smoothly aerodynamic car with a tall wing. Contrary to what some people might think, it wasn't because of a trunk rule. 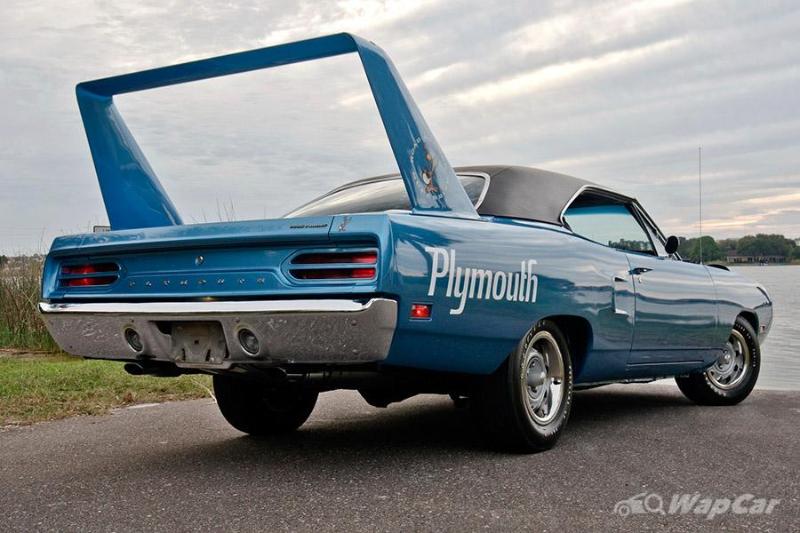 While it was pretty successful in the 1970 NASCAR season with Richard Petty at the wheel, the road-legal Superbird was slow and heavy but at least it looked great. The aerodynamic improvements only showed their worth at speeds above 97 km/h. 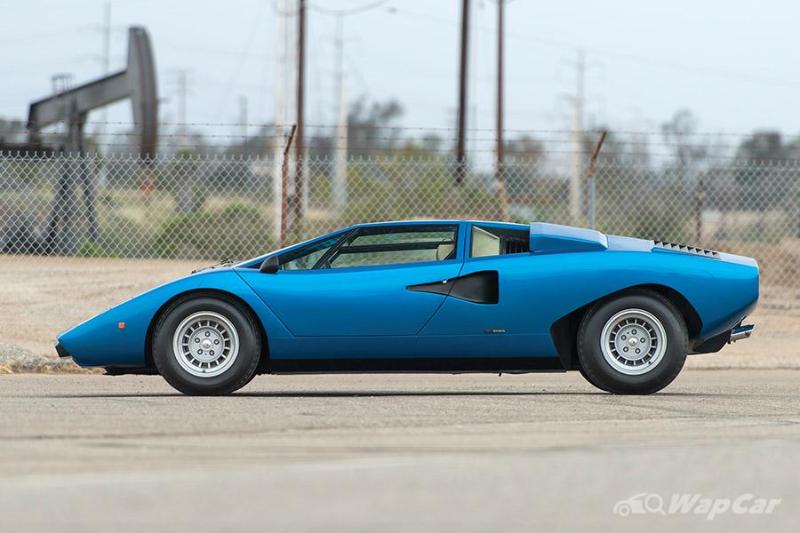 I used to keep a couple of Countach posters up on my wall and they were some of the coolest looking cars and defined the shape of Lambos for years to come. Now it’s pretty unheard of a Bull without wings but believe it or not, the Countach initially didn’t come with a wing. 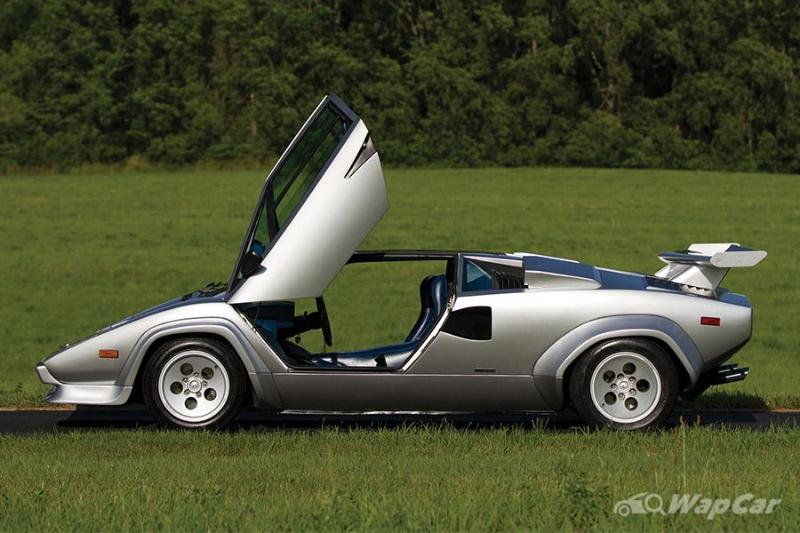 The wing was initially a one-off for F1 impresario Walter Wolf. However, the wing was purely cosmetic and was pretty useless but it looked so cool that people wanted one fitted on their Countach. 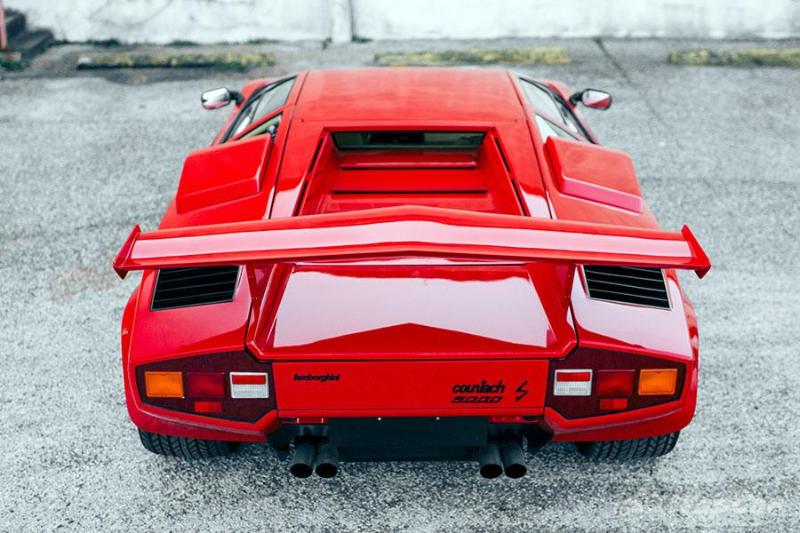 This was known as the Walter Wolf Wing and the rear wing became an option for the Countach starting from 1976. But this is Lamborghini we’re talking about. Having insufficient funds to re-homologate the supercar, the rear wing was installed in the factory’s parking lot where employees would install them with an electric drill which took about 10 minutes. 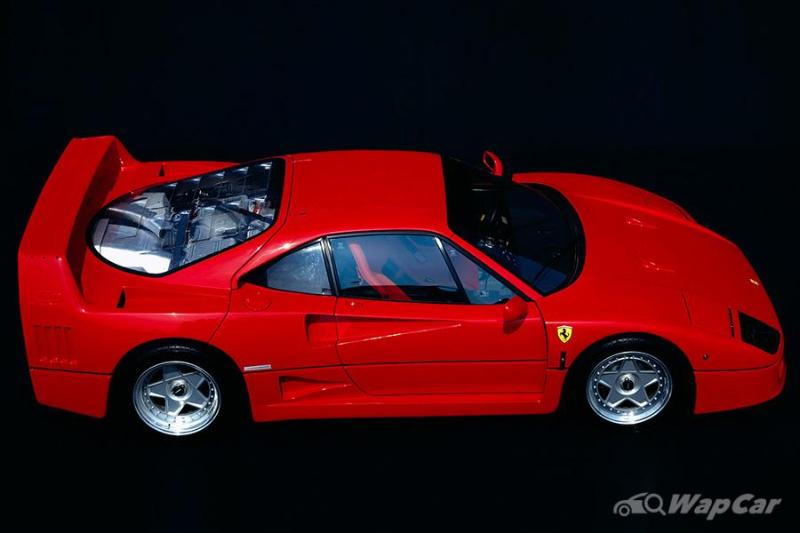 The race to reach 200 mph (324 km/h) was reaching fever pitch in the 1980s but initially, only Porsche and Ferrari showed the world that this was possible. Both the 959 and F40 showed different ways of reaching the coveted 2 centuries top speed but I think the F40 is the one to look up to. 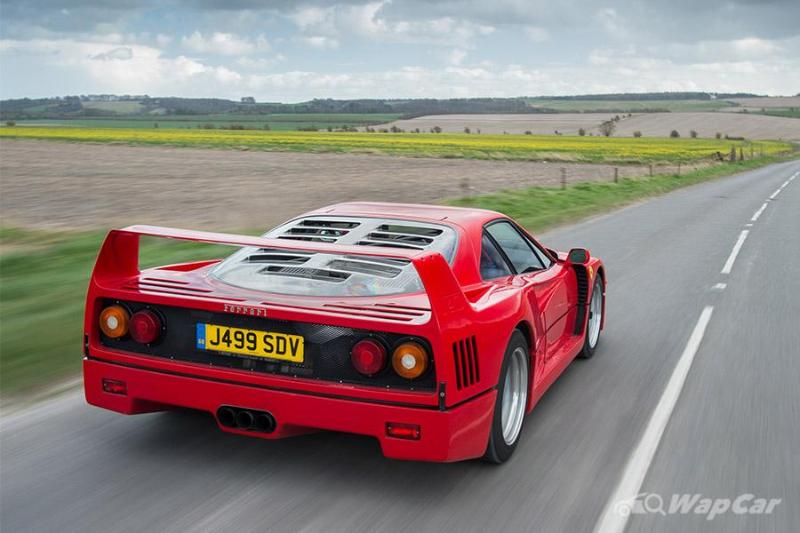 The F40 is considered by many to be the last great Ferrari as it was the last Ferrari overseen by Enzo Ferrari himself before his death. The body was made out of a composite of Kevlar, carbon fibre, and aluminium. The paint on the F40 was so infamously thin that you could see the carbon fibre weave. 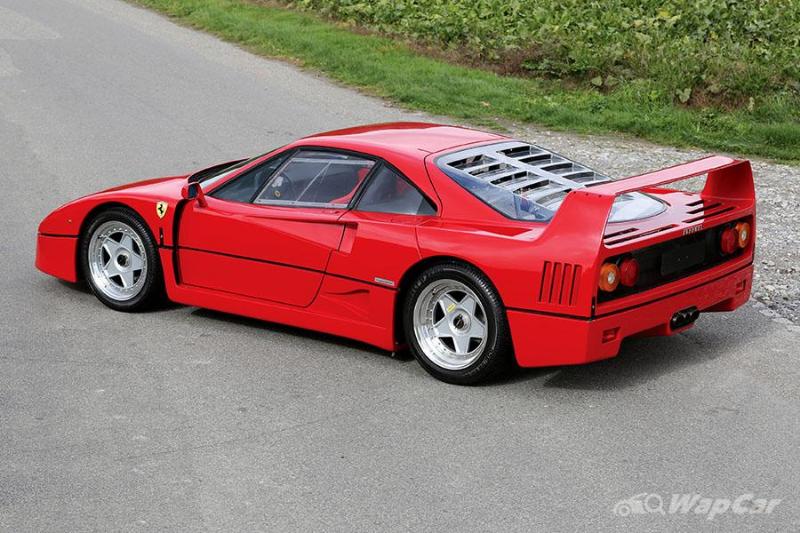 But that wing though! The F40 exudes aesthetic eighties style and the large wing helps to keep the supercar grounded when reaching speeds of up to 324 km/h. To quote Ferrari, the F40’s wing “presented the ultimate eighties power statement”. 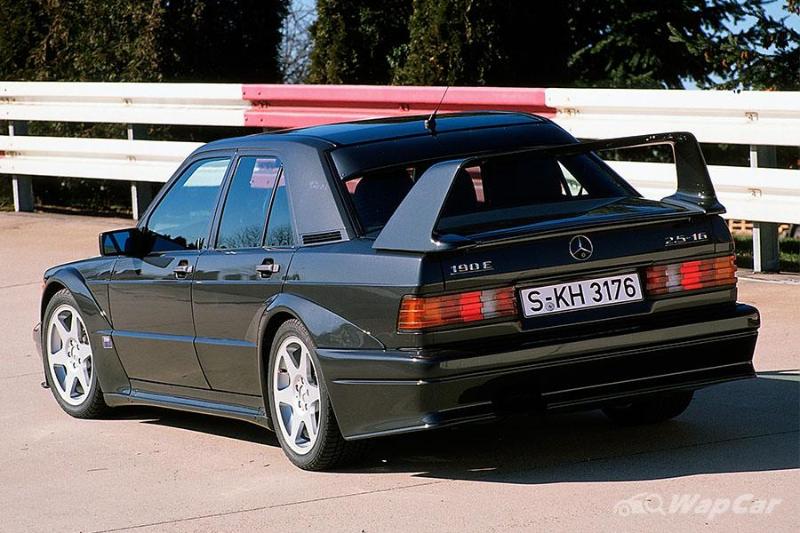 We've covered the history of the W201 190E before but the most ultimate model would have to be the 190E Cosworth, especially the Evolution II. 502 Evo IIs were made as homologated road-legal models of the ones that took part in the German DTM. 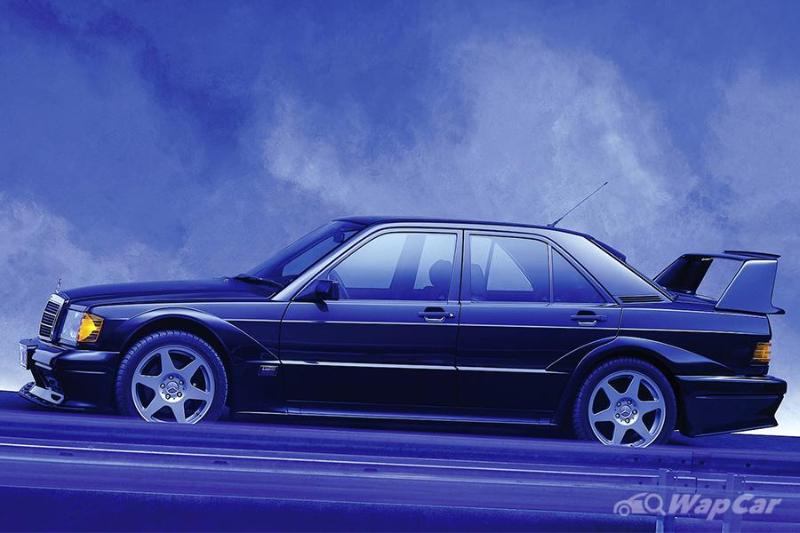 The whole body kit wasn’t a W201 that just smashed into a Brothers accessories shop but rather it had some mathematical geekiness behind all of it. The body kit was actually designed by Professor Richard Eppler from the University of Stuttgart and was wind-tunnel tested to reduce drag to 0.29. 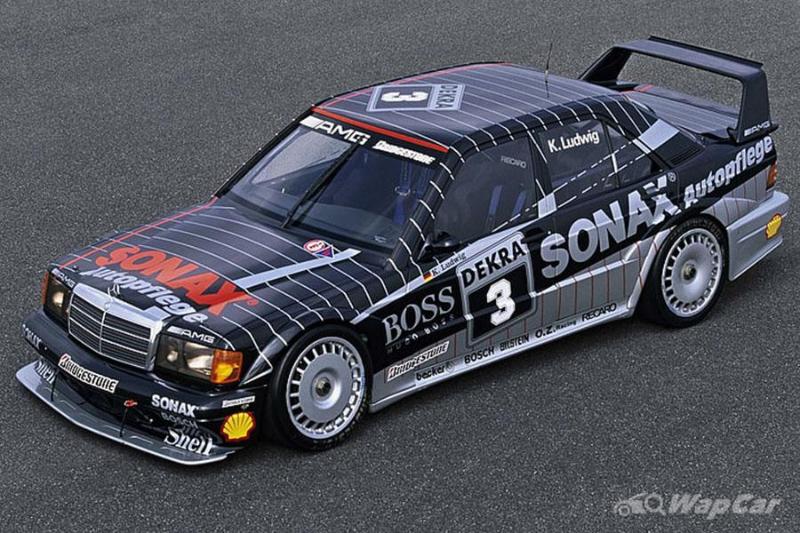 The large wing helped to cut air and as a result, the 190E Evo II won the 1993 DTM season. Oh, and it also made BMW to redesign their wind-tunnel. 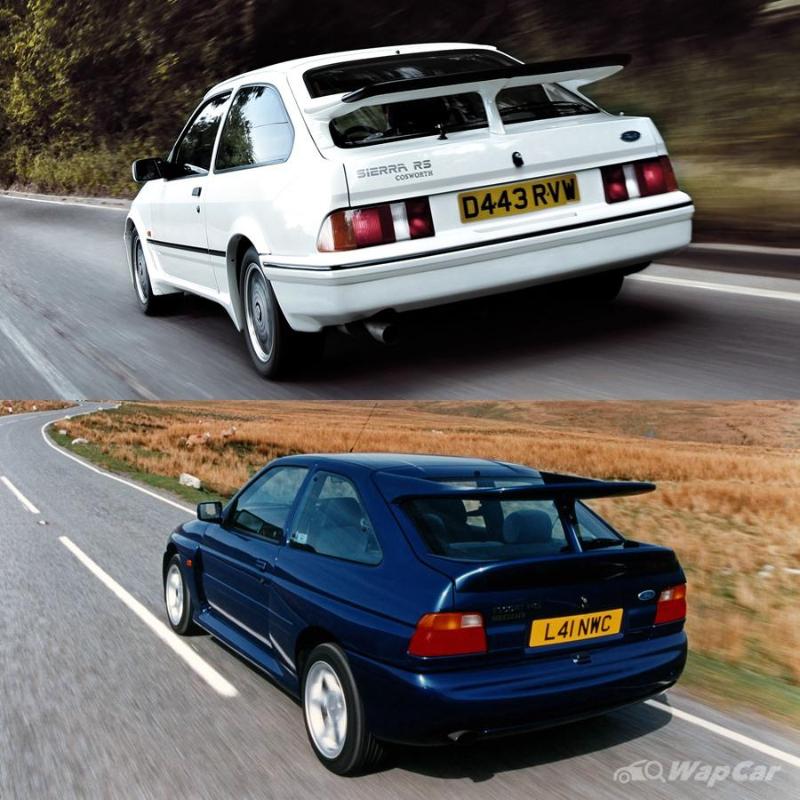 Ford was coming up with some interesting-looking rally machines in the late eighties and early nineties. Both the Sierra RS Cosworth and Escort RS Cosworth have an interesting wing set-up but the Escort deserves the cake here. 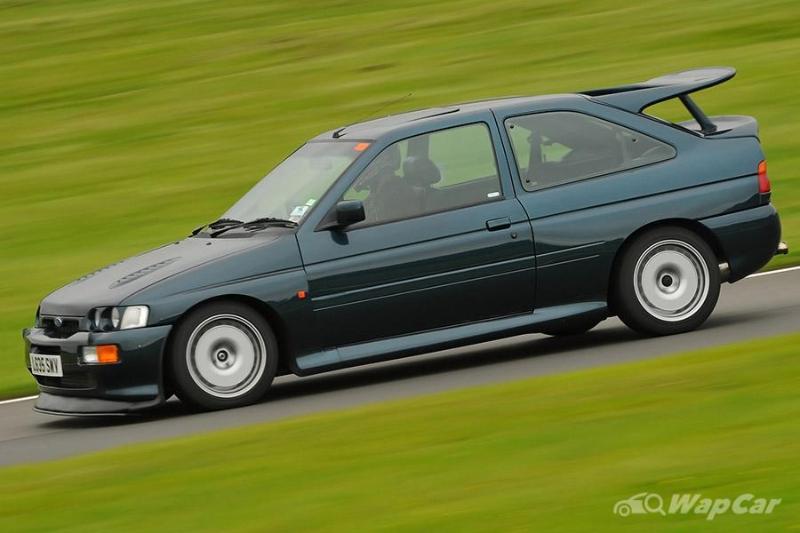 It was a hot hatch with sports car characteristics. Top speed was 240 km/h which rivaled cars like the BMW M3, Nissan 300ZX, and even the Toyota Supra. It also turned the bland fifth-gen Escort into a sexy-looking car. 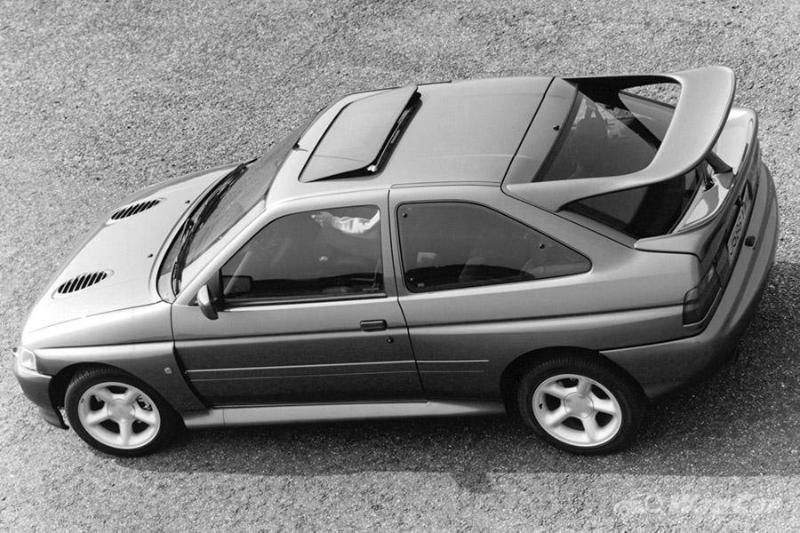 The most obvious feature of the “Cossie” is obviously the unique rear wing which was dubbed as the “whale-tail” wing by fans. The wing was added by Frank Stephenson, who later designed the first-gen BMW MINI. 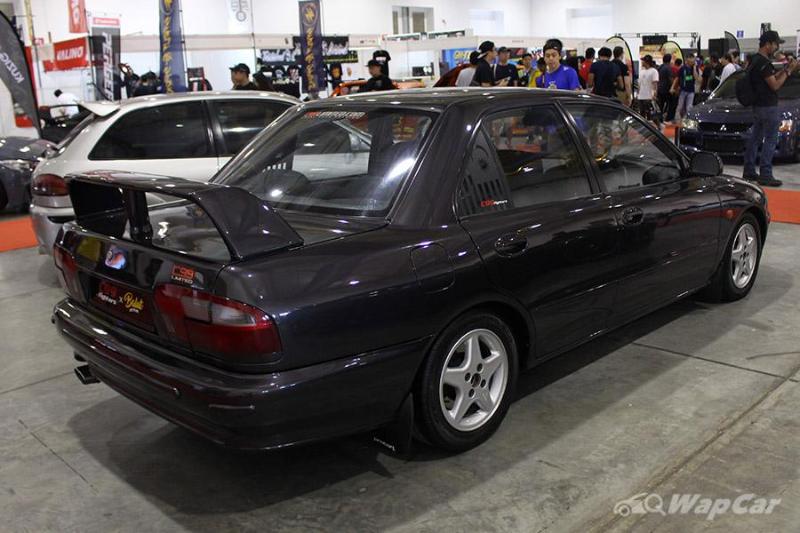 Just like the Cossie, the Proton Wira 1.8 EXi DOHC or the C99 to fans was based on a rally car. In this case, it was built to follow FIA homologation rules which stipulated 2,500 units must be sold to the public in order to rally. 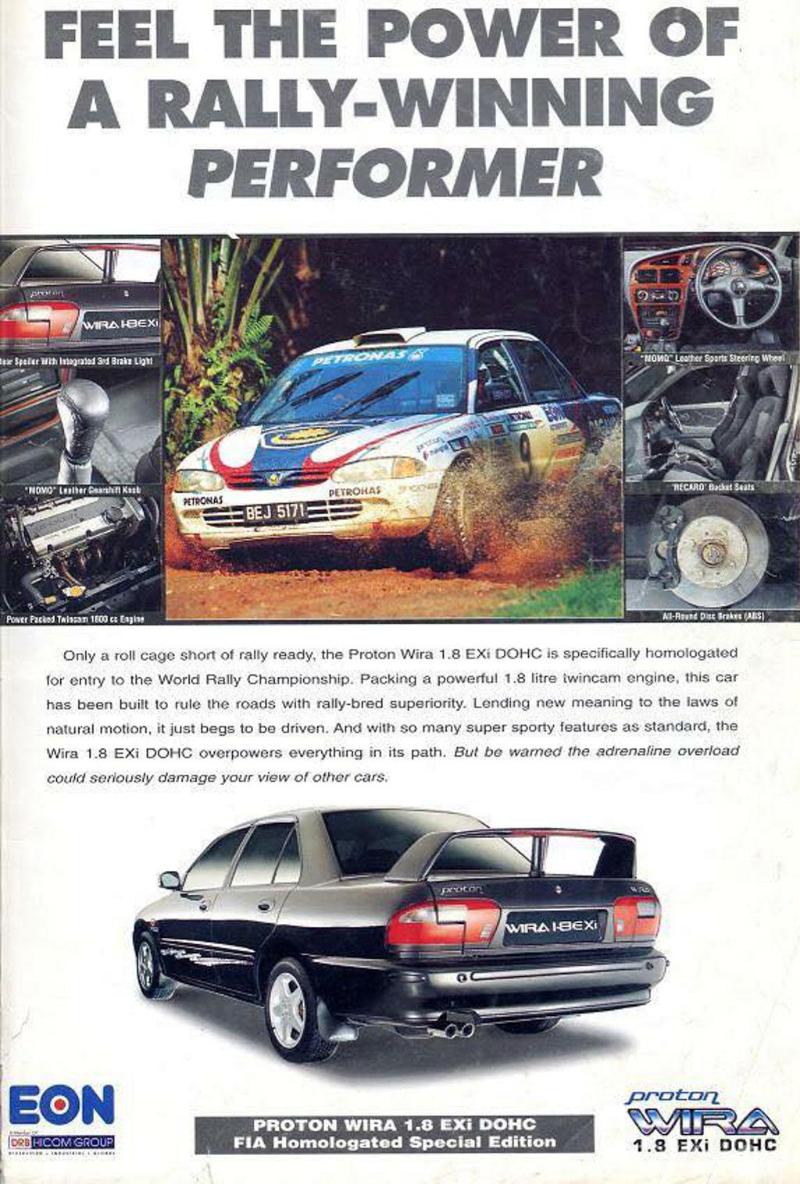 The Wira C99 represented the ultimate expression of the popular Malaysian hero with a 1.8-litre 4G93P (140 PS/167 Nm), a stiffer chassis, and uprated suspension with all-round disc brakes with ABS. 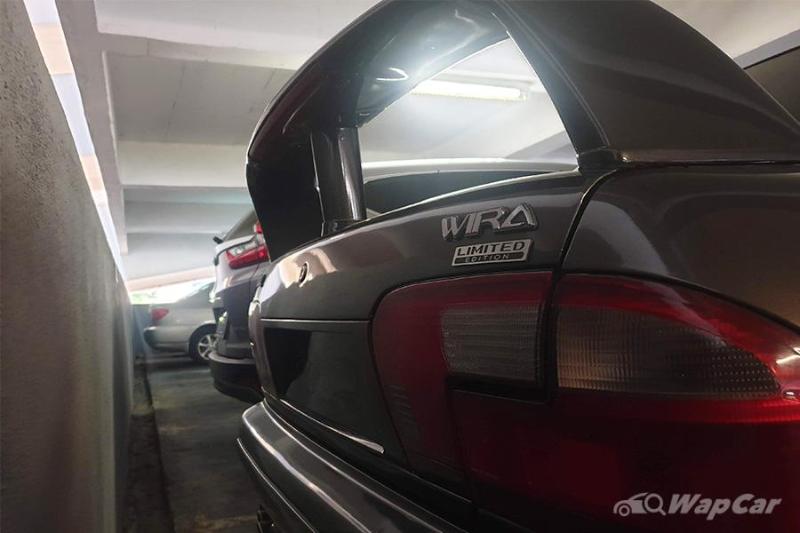 Then there’s the feature which made the C99 stood out from its regular Wira siblings, the tall wing which many fans liken it to a goalpost. Hence, the “tiang gol” wing is a sign of pride but also at the same time, a bane for owners seeing how the Wira is one of the most stolen cars in Malaysia.

The riced one – Hyundai Accent RX-S 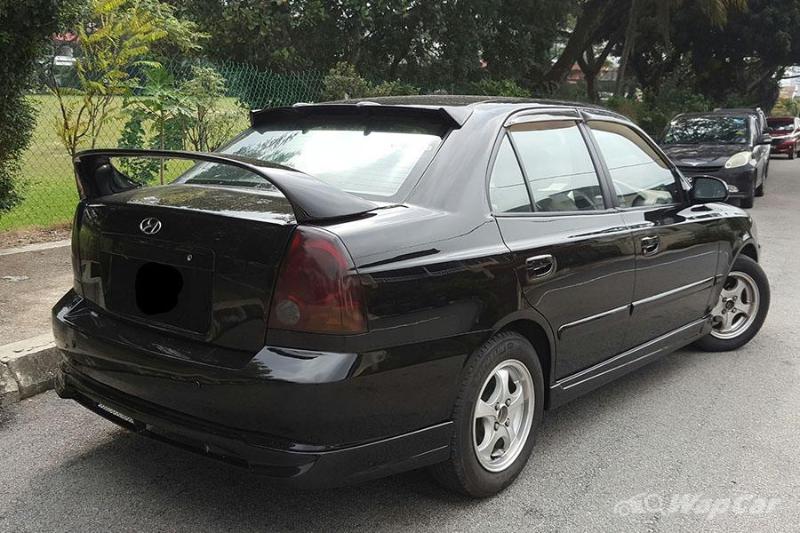 What does the Lamborghini Countach and Hyundai Accent RX-S have in common? Well, both wings are useless and while the Lamborghini looks sexy and exotic, the Hyundai looks humdrum and drab. 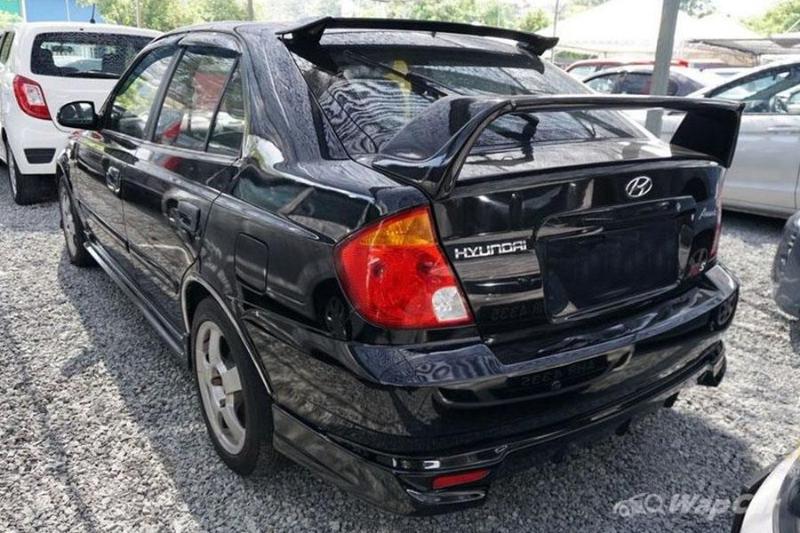 Oriental Hyundai, which used to distribute and assemble Hyundais in Malaysia, thought that adding a body kit could help clear out the lot of Accents they have left lying outside the production line. Well, whatever they think would attract the youths into buying a boring Korean car. 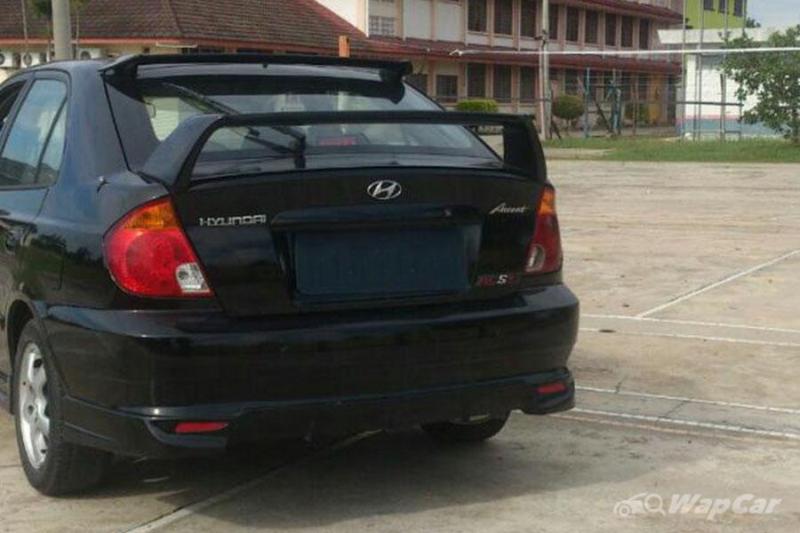 With a hood scoop, RX-S badges, and a giant rear wing that is on par with the Wira’s 'tiang gol' in terms of recognition, the Accent looks like a car out of Need for Speed: Underground. Few people bought it thinking it looked cool but the RX-S couldn’t move as fast as it looks with a standard 1.5-litre Alpha producing 92 PS and 132 Nm.

The futuristic one – Zenvo TSR-S 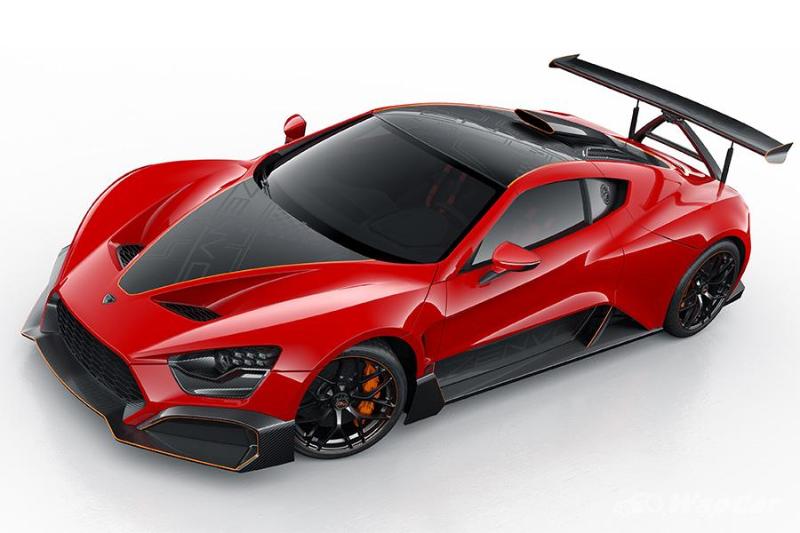 Think of Denmark and you could be thinking about what could be the most environmentally friendly place or maybe even the biscuits tin that gets filled up with sewing kits. But beneath all those green faces and sweet pastries lies an extreme hypercar maker. 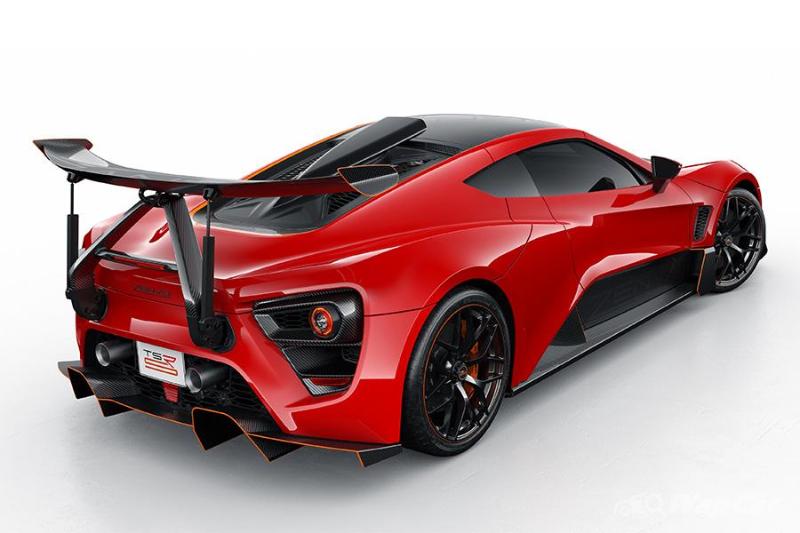 Zenvo was established in 2009 but their current model is a little bit bonkers. One look at the TSR-S and you could think it’s just some Lotus-looking car that was built in a shed just off Copenhagen. 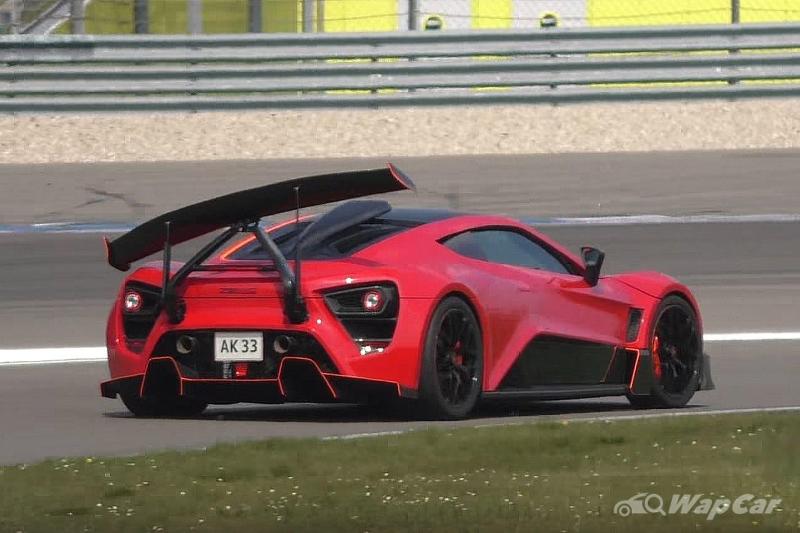 But it is a technical marvel to look at. Powered by a twin-charged 5.8-litre V8 engine that produces 1,193 PS and 1,100 Nm, the lightweight Zenvo might fly off the road but thanks to the active rear wing which tilts left or ride, it keeps the car on the road to provide enough grip around corners. 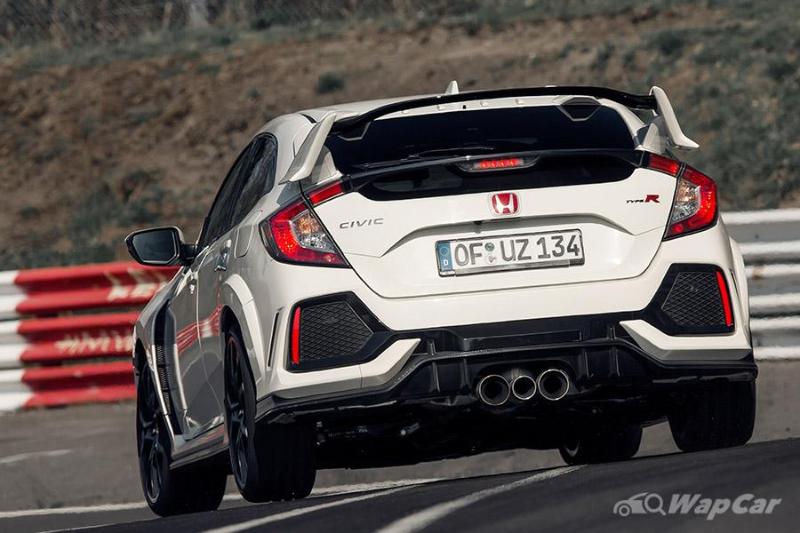 Whether you love it or loathe it, the Civic Type R FK8 is one of the few cars that you can enjoy both on the track as well as on normal roads. It is the ultimate expression of a performance hot hatch even if it has some bad connotations with it looking more ricer than racer. 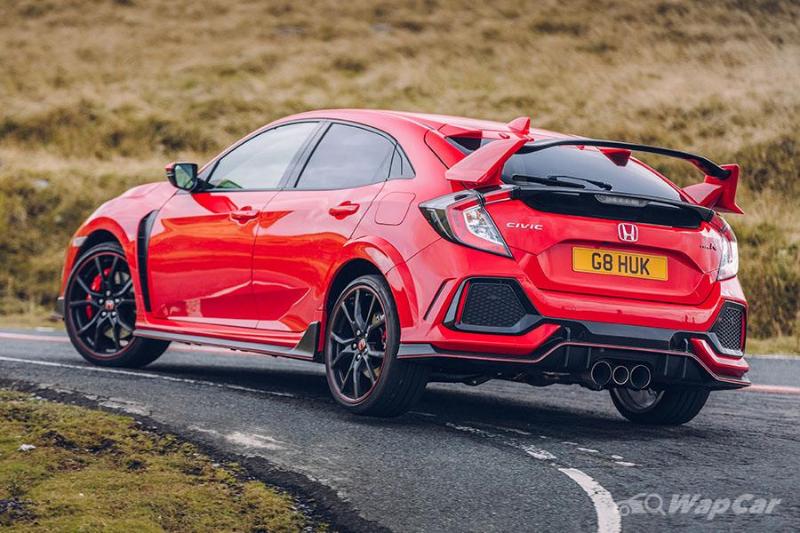 Whichever side you’re on, the FK8 has a very wild-looking wing at the back and this is the car that James May decreed the definition of a wing or a spoiler. 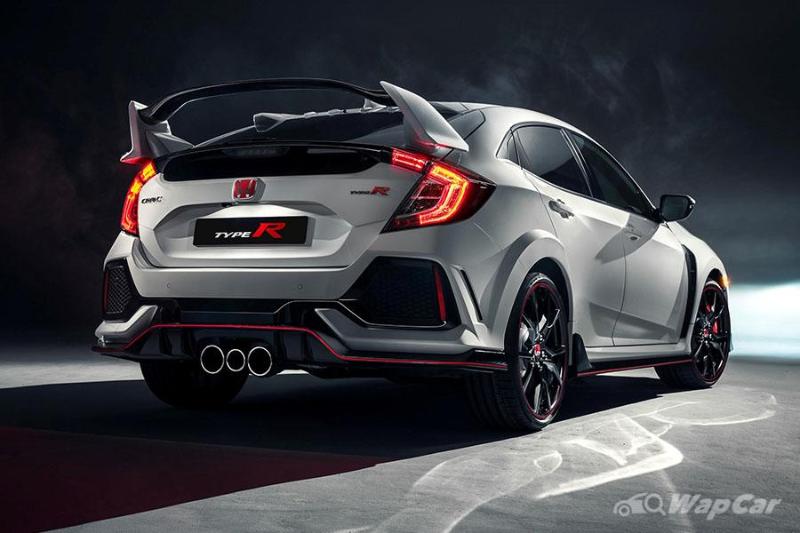 At least, the FK8’s spoiler and all the additional accessories do play a part in helping with the car and not simply thrown around to appease fanboys. The wing and the rest of the body kit help to increase downforce which allows it a top speed of 272 km/h.

The hyper one – Koenigsegg Jesko

A list with the wildest wings wouldn’t be complete without a Koenigsegg. It was infamously featured in an episode of Top Gear where The Stig spun it off the track and crashed into a tyre wall. The Swedish engineers took it back and added a rear wing which later set the record for the fastest time of 1:17.9. 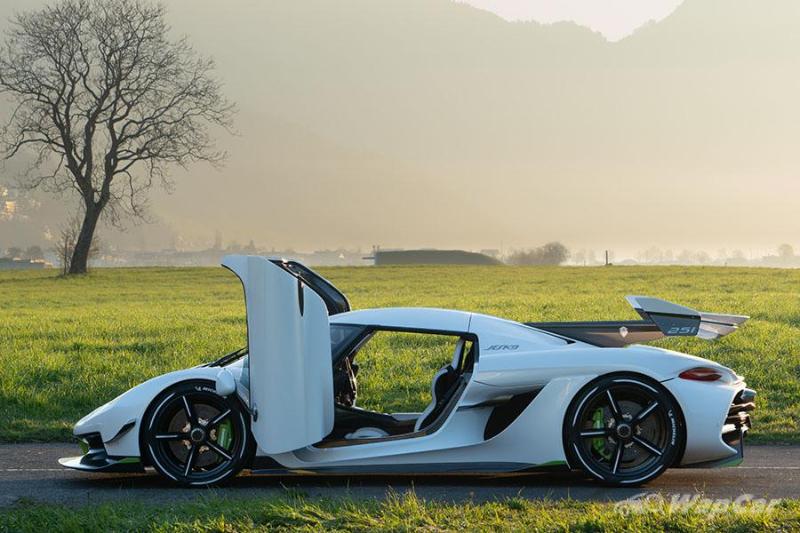 Koenigsegg has pretty much grown into an exciting albeit niche hypercar production company similar to Pagani. The Jesko is one of the latest hypercars from the Swedish carmaker and is very much performance-oriented though the top speed hasn’t been revealed. 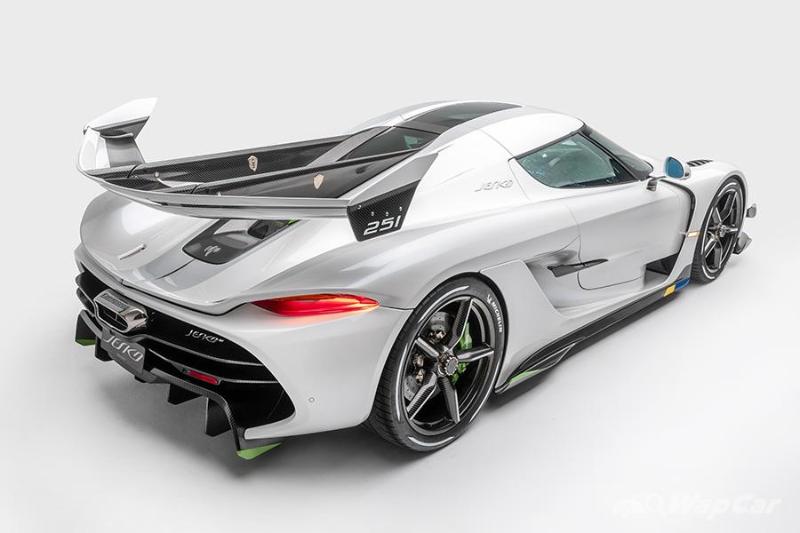 Powering the Jesko is a 5.0-litre twin-turbocharged V8 with a maximum power output of 1,625 PS. Helping to aid in aerodynamics is a boomerang-shaped wind that generates up to 1,400 kg of downforce.

So, those are the ten coolest-looking wings seen on production cars. Which of these are your faves? There are some cooler-looking ones on race cars and maybe some interesting-looking homemade ones which sadly we can’t put in this list. Let us know which one we missed out.