Toyota Camry vs Mercedes-Benz C200 vs BMW 320i Sport - which one is better? 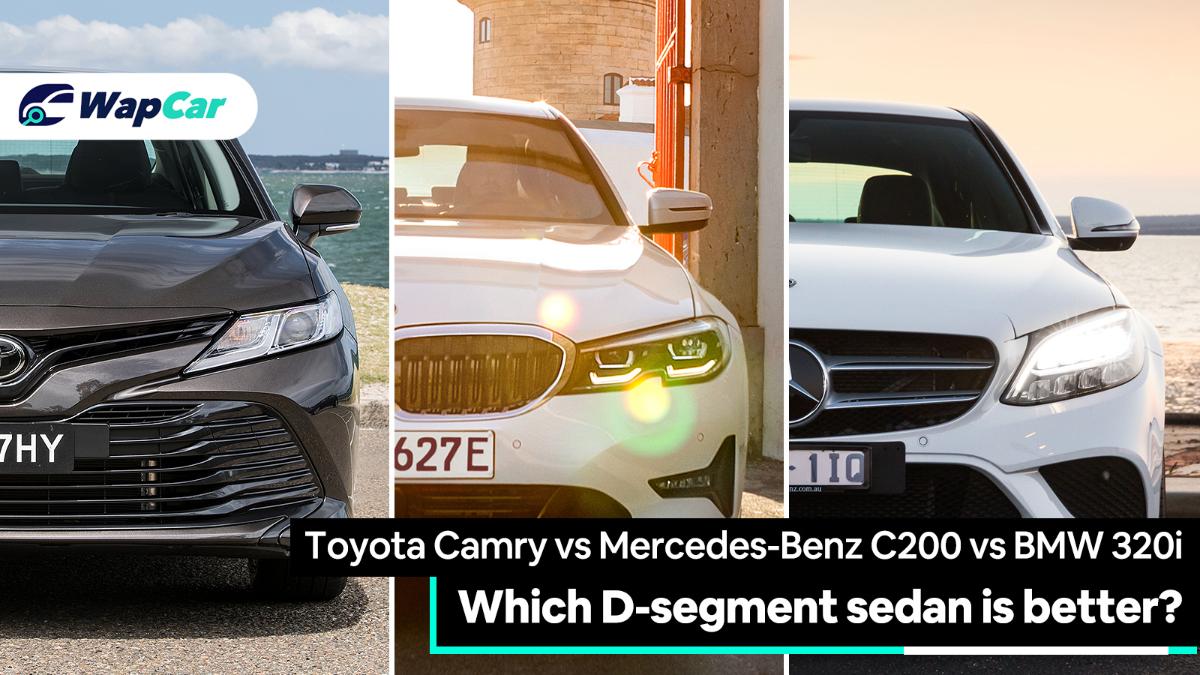 The D-segment sedan class in Malaysia is no longer the car reserved for typical ‘uncle’ owners, as the segment is reinventing themselves into a sports sedan of sort. It is for people who still appreciate the driving dynamics and feel of a low riding sedan, rather than the tall and ubiquitous SUVs roaming around on our roads. 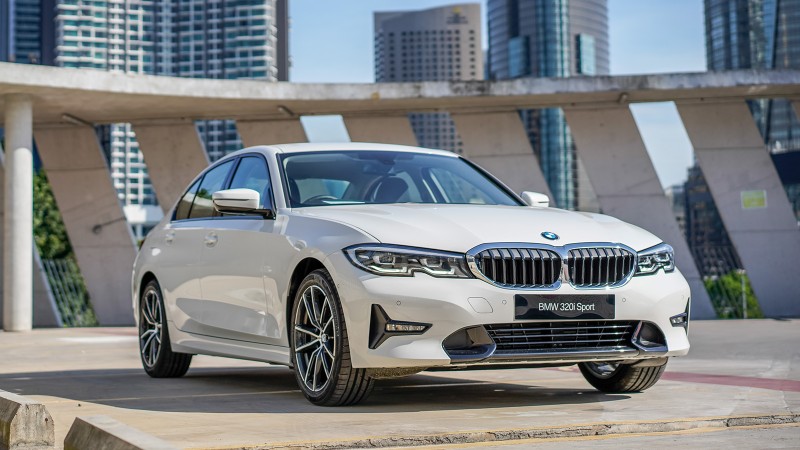 ​The latest German sedan in this segment is the G20 BMW 320i Sport, unveiled last January in Malaysia. Throughout its life, the BMW 3 Series was pretty much the go-to car for drivers, echoing BMW’s ‘The Ultimate Driving Machine’ slogan back then. However, over the years competitors have caught up with the game, and the 3 Series had a pretty busy life to defend its coveted title. 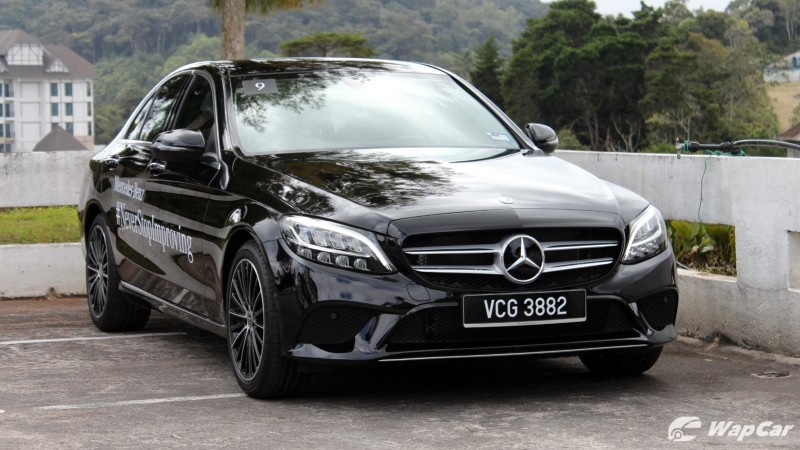 It’s hard to believe the W205 Mercedes-Benz C-Class is already 6 years old. The C-Class was given a mid-life update back in 2018 to keep up with the rest of its competitor, with the entry-level C200 ditching its previous 2.0-litre turbocharged unit for a new EQ Boost 1.5-litre turbocharged mild-hybrid engine. A replacement model is due soon, but we honestly think the C200 still has what it takes against its rival. 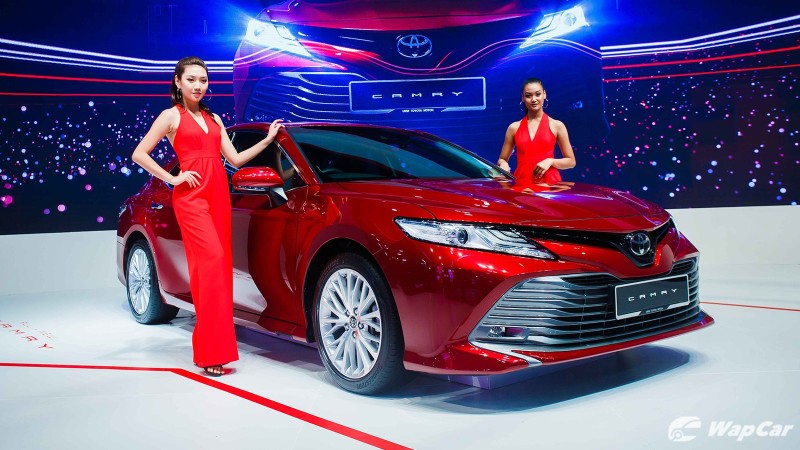 Toyota Camry is the quintessential ‘uncles’ car in Malaysia, but the new XV70 Camry is anything but that. Toyota has gone back on the drawing board with this one, transforming the Camry into a sedan that is fun and dynamic to drive, and rechristened it as ‘Beautiful Monster’, a kind of tagline that ‘ordinary uncles’ won’t come to appreciate. As the only Japanese rival in this comparison, does it have what it takes against the BMW 320i and Mercedes-Benz C200? Let us begin. 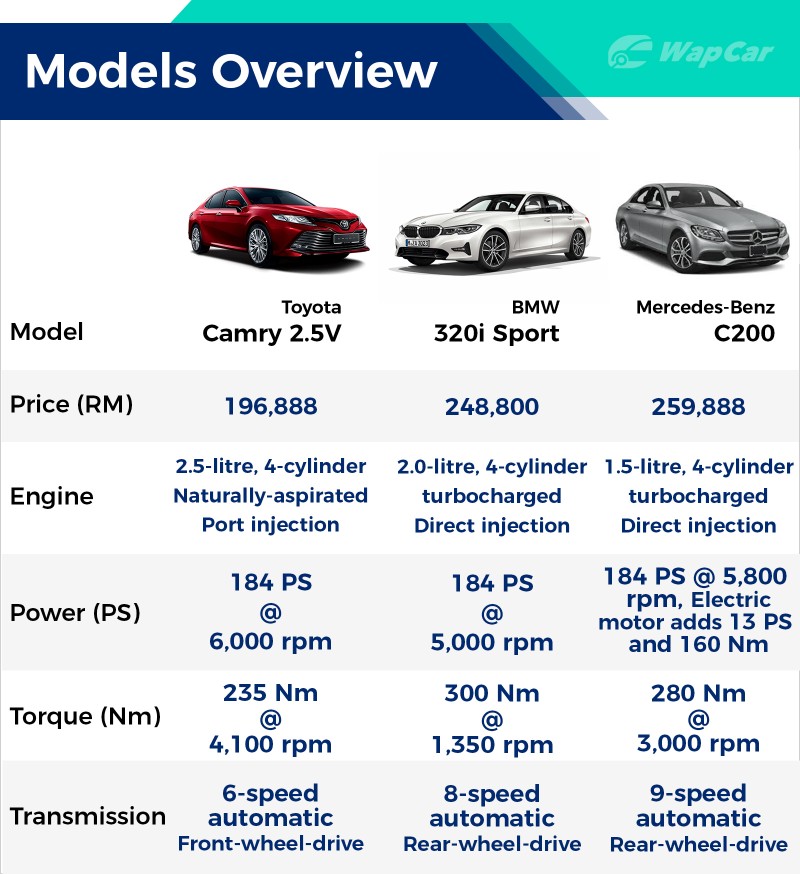 You would probably think we’re mental to compare the Toyota Camry with the German sedans, after all, they are the major player in the premium sedan segment, no? Sorry to burst your bubble, as that is not the case anymore. The Japanese have grown up so much that it rightfully deserves a spot in between these two. 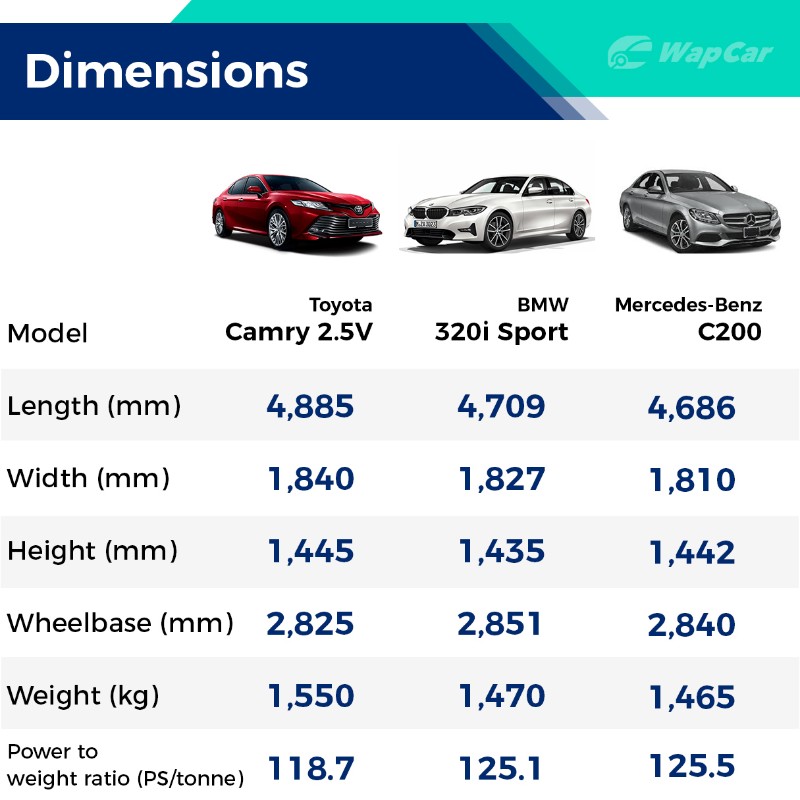 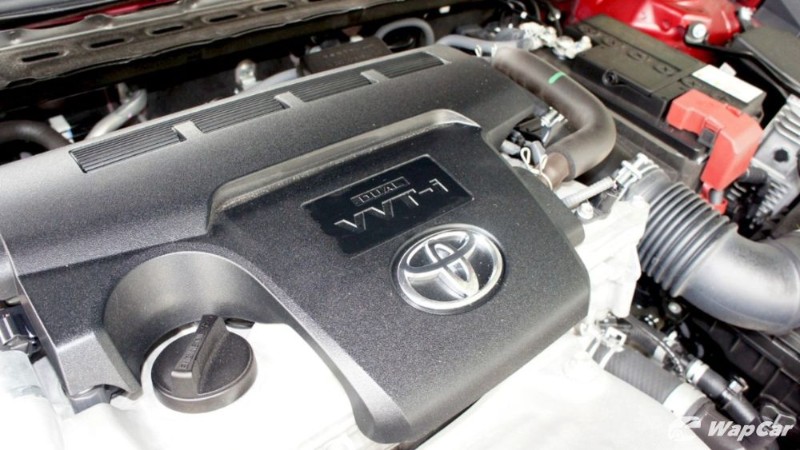 Sadly, it is lacking in the mechanical department against the two German rivals, having to rely on its predecessor’s 2.5-litre 2AR-FE naturally-aspirated four-cylinder engine with 184 PS and 235 Nm, mated to 6-speed torque-converter automatic. 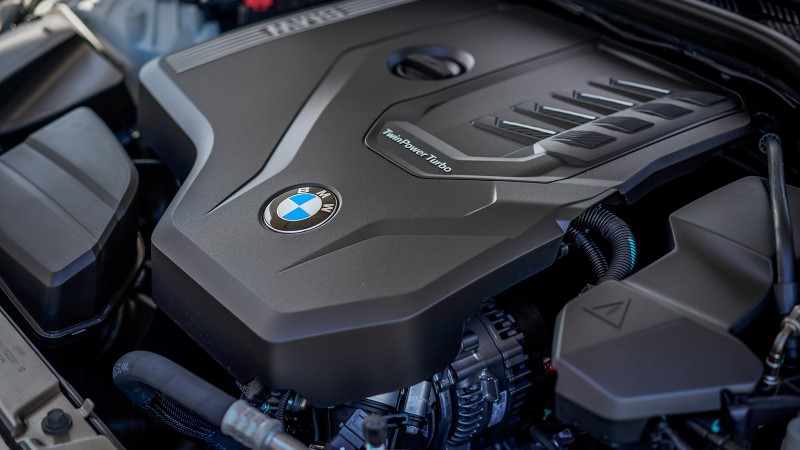 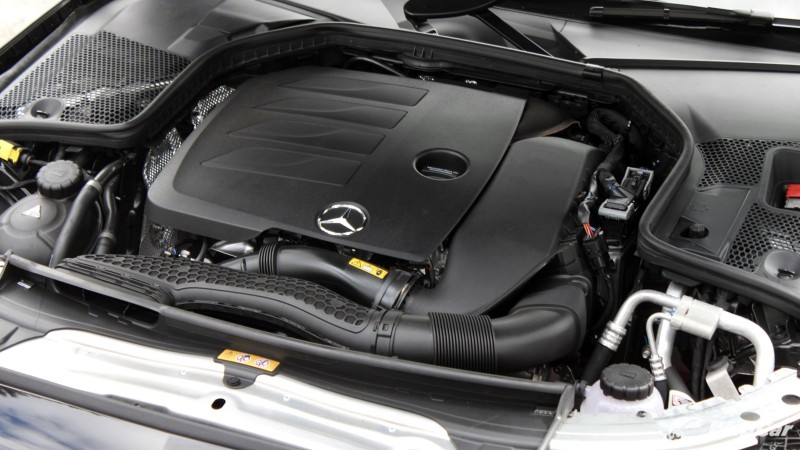 The aging Mercedes-Benz C200 is the priciest out of the trio, with prices starting at RM 259,888. However, it is the only one with a combination of turbocharging and mild hybrid system to back up its asking price. The turbocharged 1.5-litre engine produces 184 PS and 280 Nm of torque, with additional 13 PS and 160 Nm available from the EQ Boost electric motor. Power is sent to the rear wheel through a 9G-Tronic 9-speed torque-converter automatic. 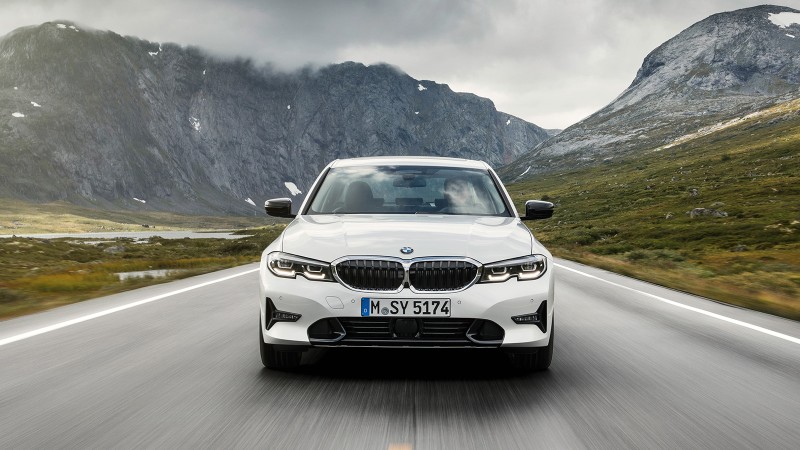 In the 0-100 km/h sprint test, the 320i is the fastest overall with 7.1 seconds. Despite the fancy combination of turbocharging and mild hybrid system with instantaneous power delivery from standstill, the C200 only managed 7.7 seconds. Unsurprisingly, the Camry is the slowest among them all, taking its own sweet time with 10.5 seconds. 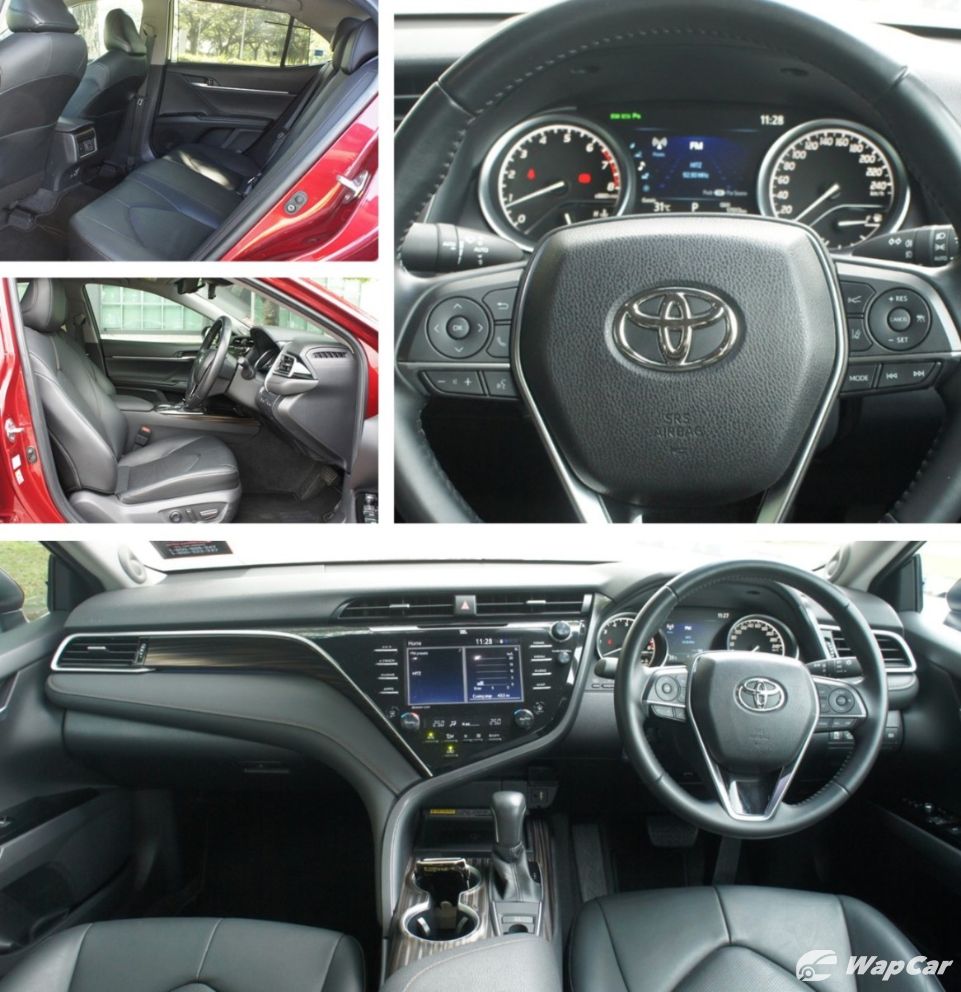 This is where the Toyota Camry shines among its rival. We have mentioned it countless times before, and we stand firm with our belief – the Camry is THE most comfortable D-segment sedan in its class, so much that even it outshines both the German rivals. The ride is supple but not overly firm over bumps, and it glides through like a smooth sailor ship.

The leather seats is supportive and comfortable but lose out a little bit in terms of a premium feel and perceived quality. Also, the XV70 Camry retains its signature shoulder adjustment switch, so the person sitting behind can push the front passenger seat forward. 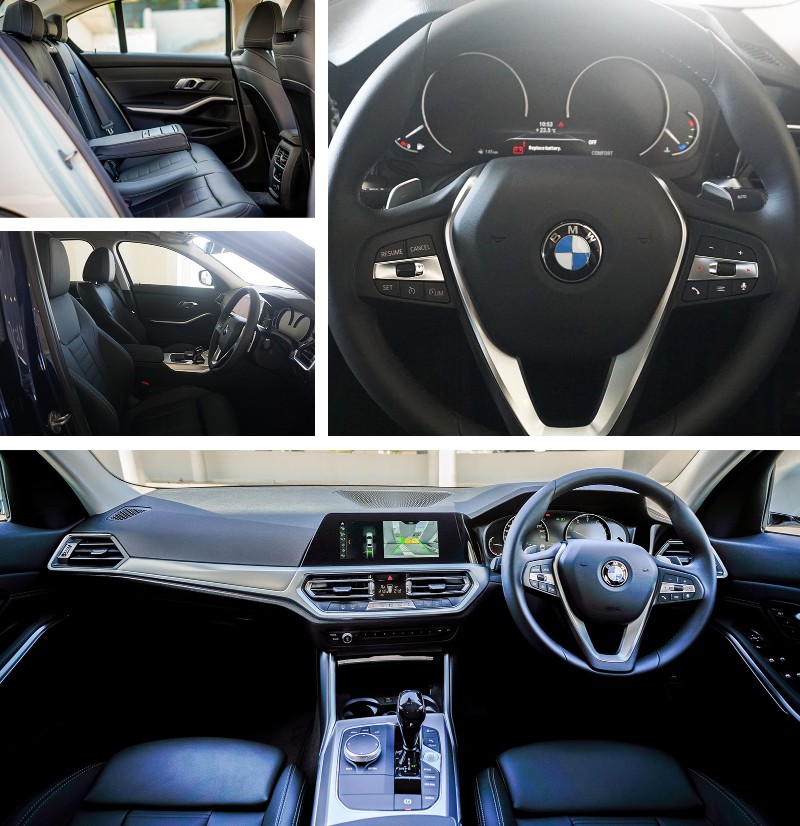 The G20 BMW 320i rides firmer than its predecessor, and it becomes evident at lower speeds and on poorer surfaces, where there is quite a bit of imperfection being picked up from the tarmac. It’s not crashy nor harsh to the point of being overly firm like the C200, but yet it is not quite there yet against the Camry.

For those that is used to the F30 3 Series, however, you will appreciate the firmer ride compared to the soft and wallowy F30. The cabin has undergone bit of rework and feels more upmarket than before. In terms of plushness, it's tad better than the Camry, but can’t quite match the offering in C200. 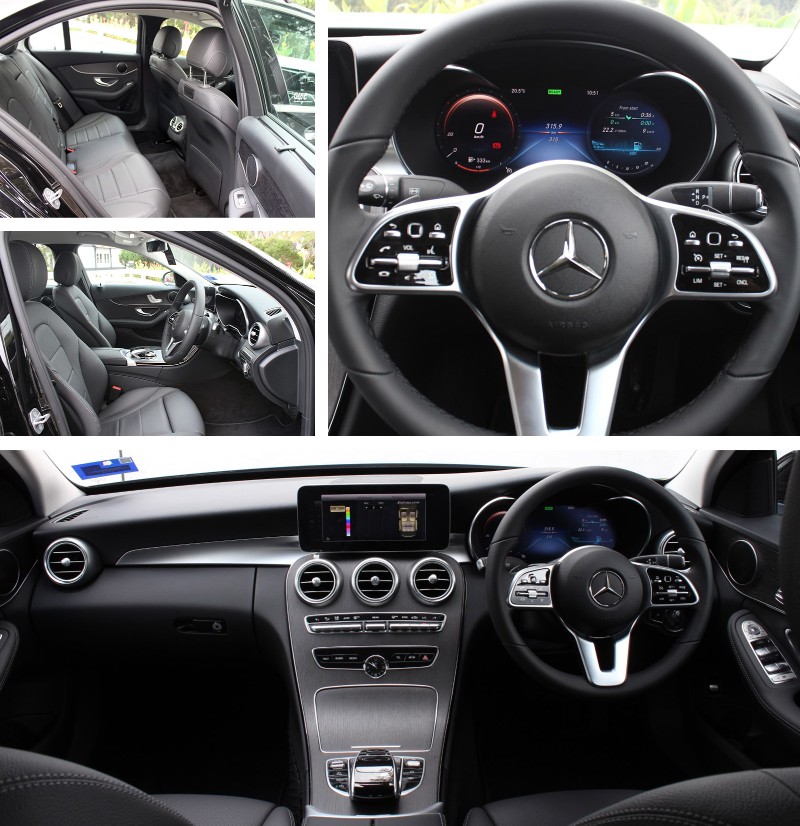 You would think that being a Mercedes-Benz, comfort will be its strong point but truth be told, it is the least comfortable out of the three. Surprised? The damping rebound is overly stiff even on normal mode, and the damper jolts down way too much for its own good, taking its own sweet time during compression. Even Airmatic equipped C300 variant isn’t any better.

It does not have the quietest cabin among the other two as well. What it makes up is the quality of cabin materials. Despite its age, it still feels a tad more premium than both the 320i and Camry. 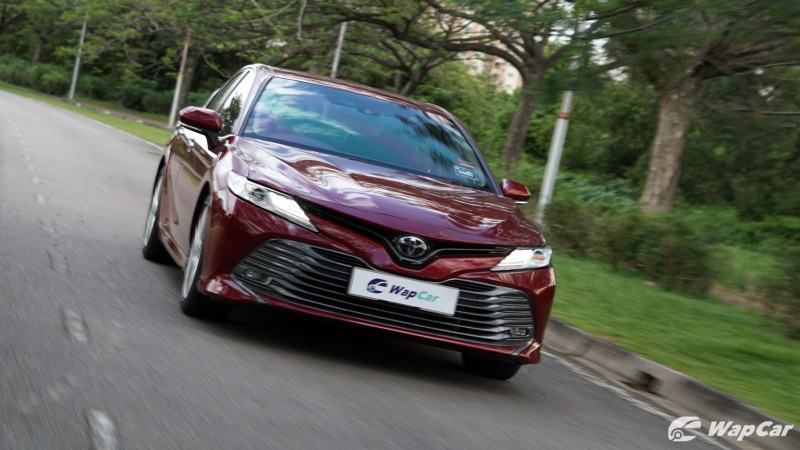 Positioning it to be a sporty and dynamic, the Toyota Camry benefits from Toyota’s TNGA architecture, striking a great balance between being too sporty and being too soft. Never mind the aging 2AR-FE engine, the driving experience alone is enough for you to overlook its Achilles heel.

Compared to the 320i, the Camry glides through the corner with upmost sophistication without being overly finesse, and these feeling you get certainly appeals to those looking for a balanced proposition. The same feeling extends to the steering, as the Camry exhibit a calmer and graceful feel, adding that sense of luxury to it. 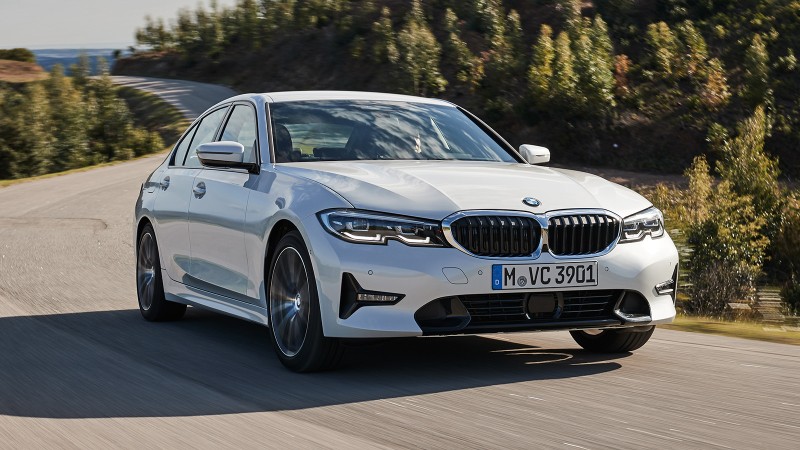 The BMW 320i benefits from new geometry and improved chassis, which allows the new car to corner flatter on a higher limit, effectively allowing more to be explored than before. The partnering ZF eight-speed automatic transmission continues its fine work, silky-smooth, responsive and willing to follow your command.

However, the rear end gets twitchy and busy when driven too hard, and this might be a little uncomfortable for some. The steering remains light in feel but is quick and clean on-centre, responsive when lock is applied although the majority of the feedback largely comes from the chassis. 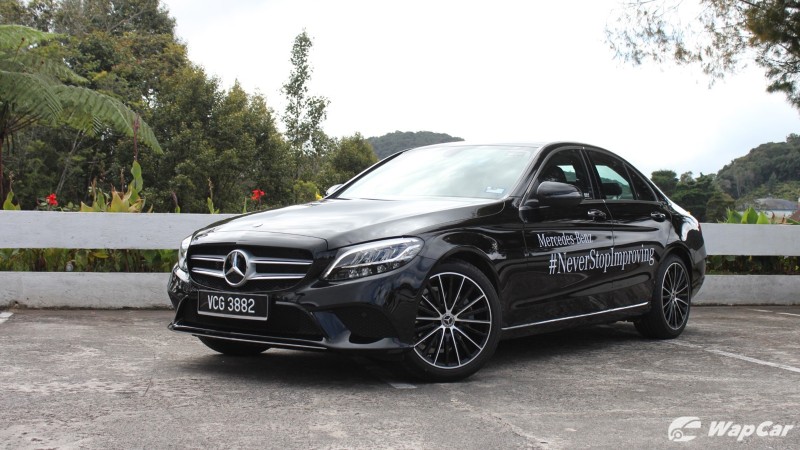 Against the Camry and 320i, the Mercedes-Benz C200 is completely outclassed in the handling department. The stiff damping surely made the C200 a performer going through turns, but even then it is not as good as the 320i. Plus, the light steering has a tiny bit of dead off-centre on the straight, and exhibit a vague feeling during cornering that it is so confidence uninspiring.

Its saving grace however, is the 1.5-litre EQ Boost drivetrain. Thanks to the always available on-demand torque from the electric motor, the engine is frugal, punchy and smooth. 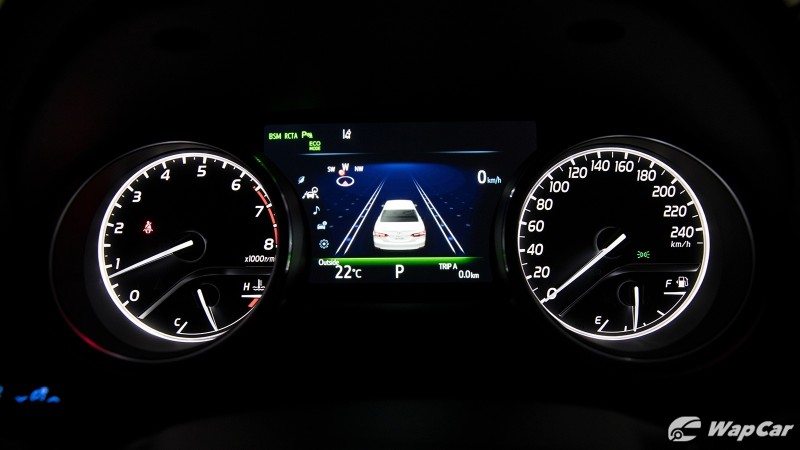 During our own test, the Camry averaged 7.7 litre/100 km on urban roads with a mix of smooth and heavy traffic. In our opinion, the fuel consumption is around what is expected for a 2.5-litre naturally-aspirated engine in a D-segment sedan. 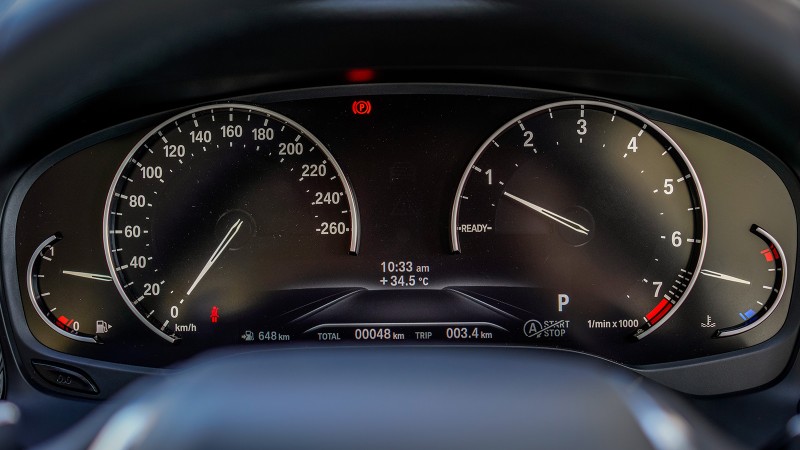 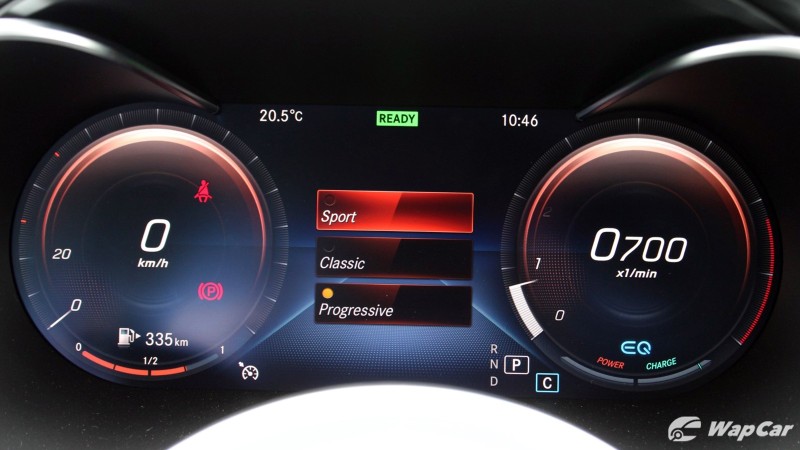 While Mercedes-Benz claims the C200 does 7.2 to 6.3-litres/100 km in mixed driving condition, with combined CO2 emissions of 165-144 g/km. Having the 48-volt electric motor allows the C200 to reduce fuel consumption even further.

If space is what you’re after, the Camry’s 493 litre is the largest here, enough to swallow your boss luggage for the long outstation business trip. The Camry also comes 60:40 split-folding rear seats, in case you have more item to store.

The 320i boot space is 480 litre, similar to F30’s boot space, although BMW claims there is better usability of the volume in the new model. As before, 40:20:40 split rear backrests ensure versatility in transporting longer items. 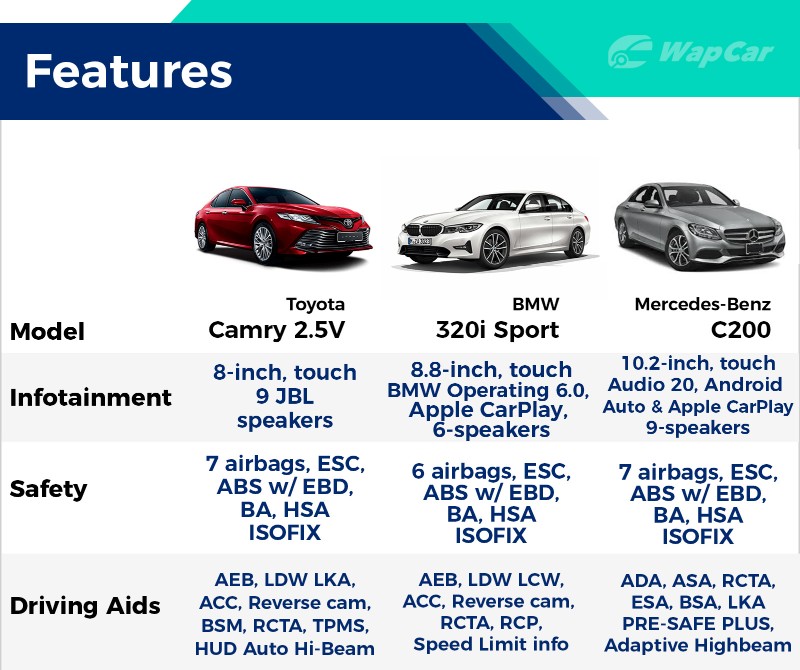 The Camry’s 8-inch touchscreen system is the smallest here, but it is paired to a kickass JBL sound system with 9-speakers.

Compared to the two German rivals, we personally think it has the best sounding sound system in this comparison. It’s just a shame that it does not support Apple CarPlay and Android Auto, otherwise it would have been perfect.

In the 320i, there’s an 8.8-inch touchscreen system that runs on BMW Operating System 6.0, but it only supports Apple CarPlay. BMW’s reasoning for this is due to privacy issues with Android Auto as BMW does not want Google to feed ads to its customers.

Ironically, BMW’s Digital Key feature is only available for Android smartphone users. We have elaborated BMW’s inconsistency on this issue in this separate article before if you wish to educate yourself on the matter further. Back to the topic, the entry-level 320i make do with only 6-speakers on board, the least amount of speakers amongst its two rival.

And here’s where the C200 up its game. The 10.25-inch Audio 20 infotainment touchscreen features both Apple CarPlay and Android Auto, all played through 9-speakers for a thorough sound experience. It could not match the fantastic JBL audio in the Camry though, but with the inclusion of Apple CarPlay and Android Auto, it is by far the most complete infotainment in this comparison.

Safety-wise, the Camry comes with 7-airbags, ABS with EBD, TRC, ESC and ISOFIX as standard. It also comes with Toyota Safety Sense ADAS, which includes:

When the G20 BMW 3 Series first launched in Malaysia, it was lamented with criticism for not featuring ADAS as standard. It took BMW Malaysia a while to rectify this, but all 3 Series now comes with Driving Assistant package, which features:

Airbag count stands at 6, lacking the knee airbag available in the Camry. Other safety features such as ABS with EBD, TRC, ESC and ISOFIX comes standard in the 320i.

It might be old, but the C200 comes with 7-airbags along with similar safety equipment features like the Camry. With Mercedes-Benz’s Driving Assistance Plus, you’ll get:

In this instance, we can conclude that both the Camry and C200 is well equipped in the safety department, featuring more driver-assisted tech compared to the 320i. The fact that it took BMW a year later to have ADAS as standard is puzzling. 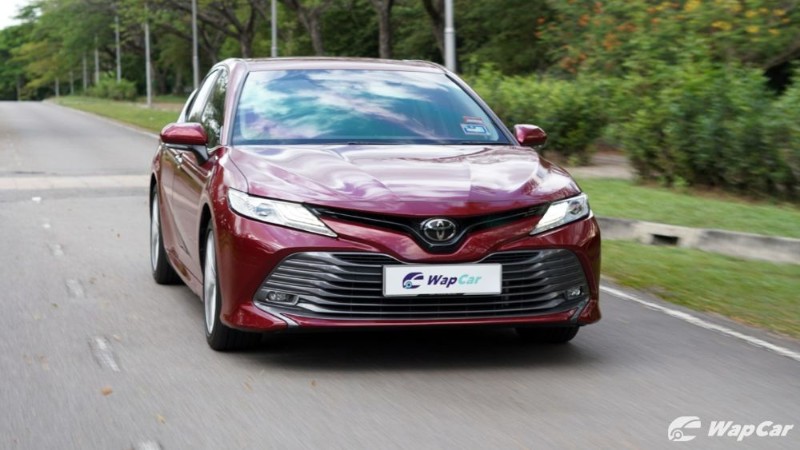 If you enjoy driving but prefer something with more elegance and grace, the XV70 Toyota Camry 2.5V is the right one for you. Despite being over RM 40,000 cheaper than the 320i and C200, it is well equipped and an all-rounder. The usage of the 2AR-FE 2.5-litre naturally-aspirated engine from its predecessor also means proven reliability compared to the two forced-induction rivals.​ 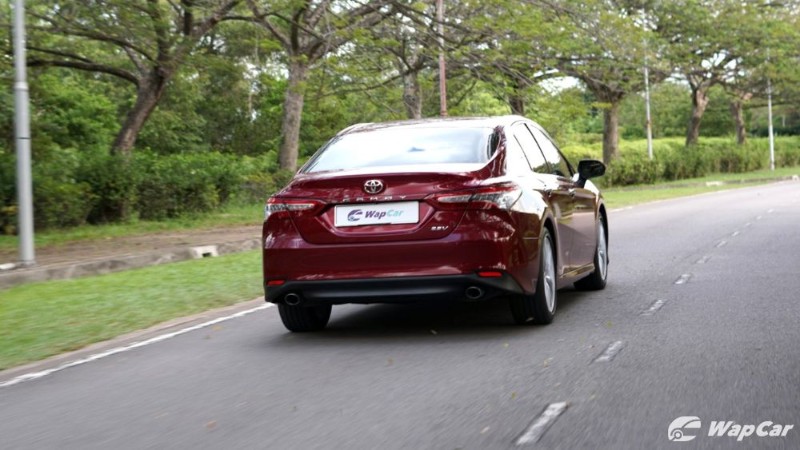 There’s no denying the 2AR-FE engine is its Achilles heel. It would have been an even better proposition had it come with the 2.0-litre Dynamic Force engine with more power and torque. Plus the lack of Apple CarPlay and Android Auto is a shame, otherwise, it could’ve been a proper eargasmic experience.​ 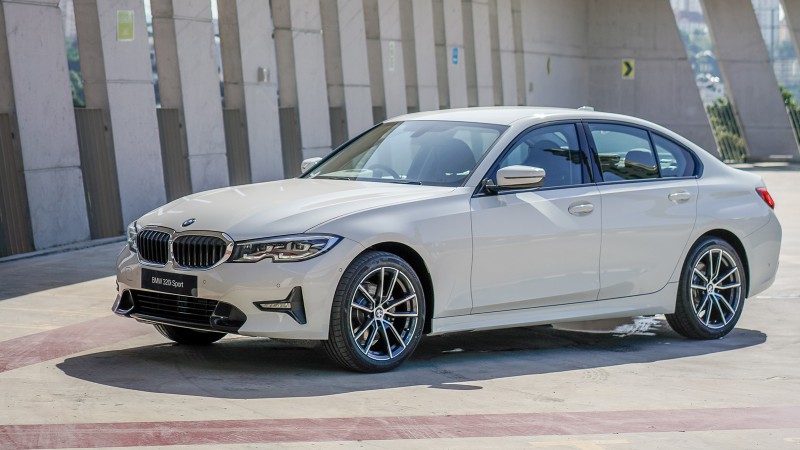 The G20 BMW 320i Sport is an evolution of character closer to the more driver-focused E90 3 Series than the previous F30 model, which is closer to the comfort-biased E46 than the E90. It strikes a great balance, and echoes closer to BMW’s ‘Sheer Driving Pleasure’ slogan. 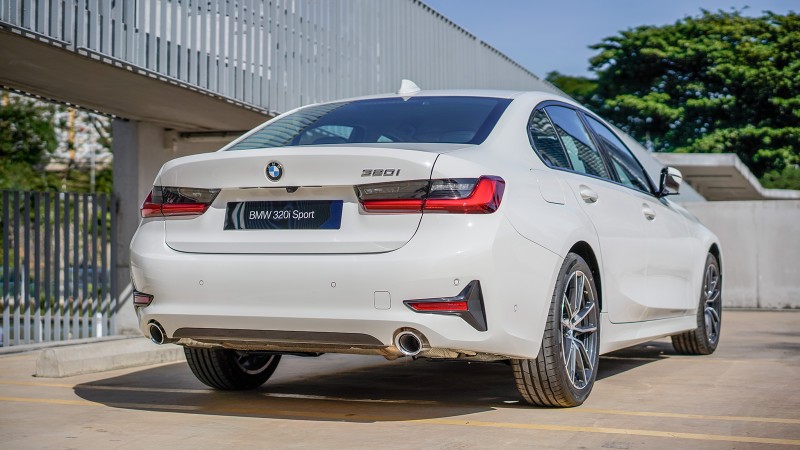 On the limit, the rear end might be a little too twitchy and eager to play around, and such characteristic gets tiring for a while. Plus the issue between Android and Apple compatibility for certain features on the car is really messy. Get your act straight up, BMW. 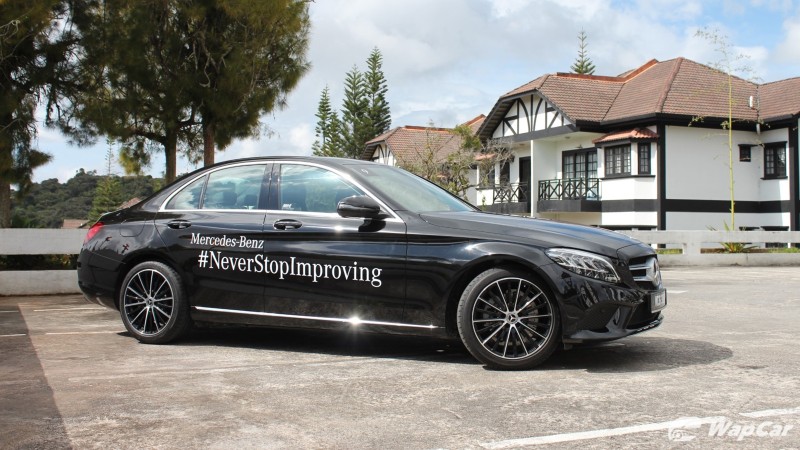 The W205 Mercedes-Benz C200 still has some life into it. It has a more complete audio and infotainment system out of the two, interior cabin quality feels more premium, and the EQ Boost drivetrain is a great piece of engineering. 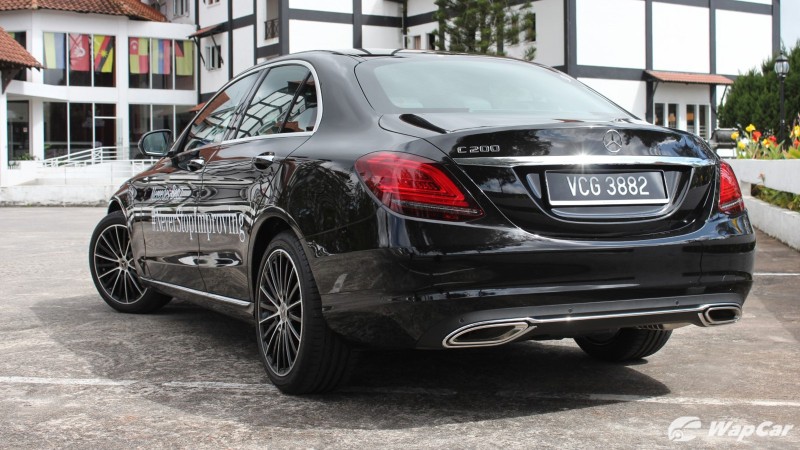 There’s no hiding the fact that it is aging. The ride comfort is terrible, and it does not turn well in the corners too.