Home > News > Toyota Corolla Cross, how big is it vs Honda HR-V and Toyota C-HR?

Toyota Corolla Cross, how big is it vs Honda HR-V and Toyota C-HR? 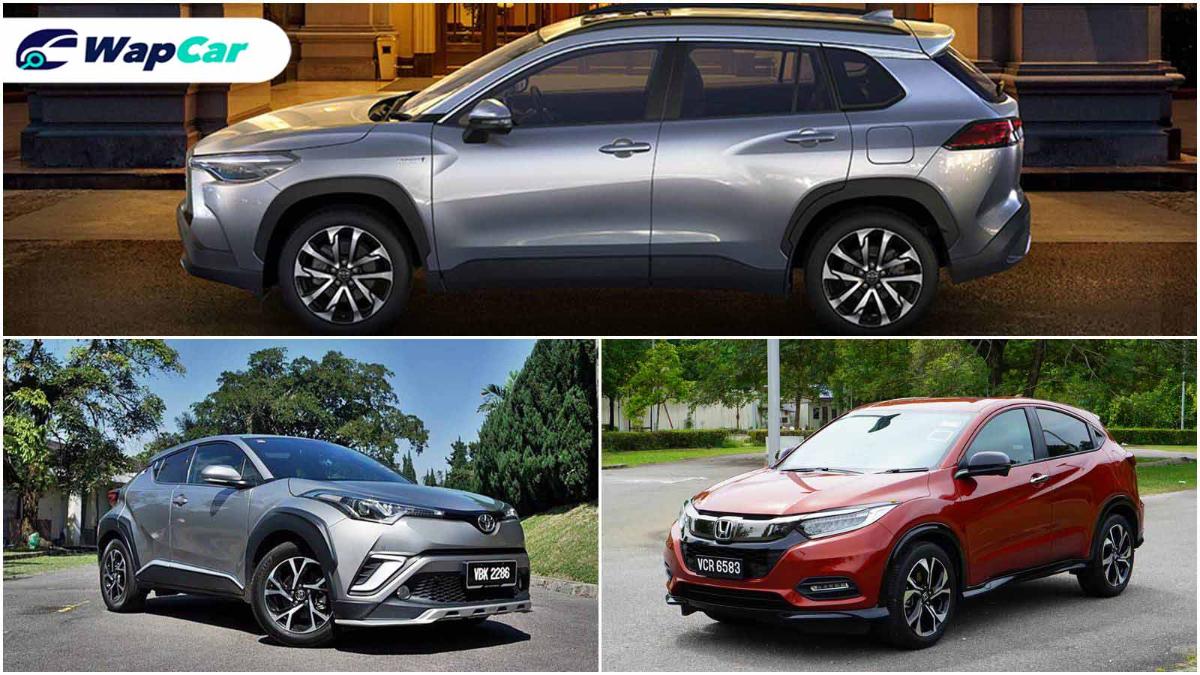 Finally, the 2020 Toyota Corolla Cross has made its global debut in Thailand. As we covered in detail, the specs on this new Toyota crossover are surely impressive.

UMW Toyota Motor has hinted that it will bring the Corolla Cross over to Malaysia. But what does this mean for Toyota’s crossover line-up in Malaysia, especially with the C-HR which shares the same TNGA-C platform as the Corolla Cross? 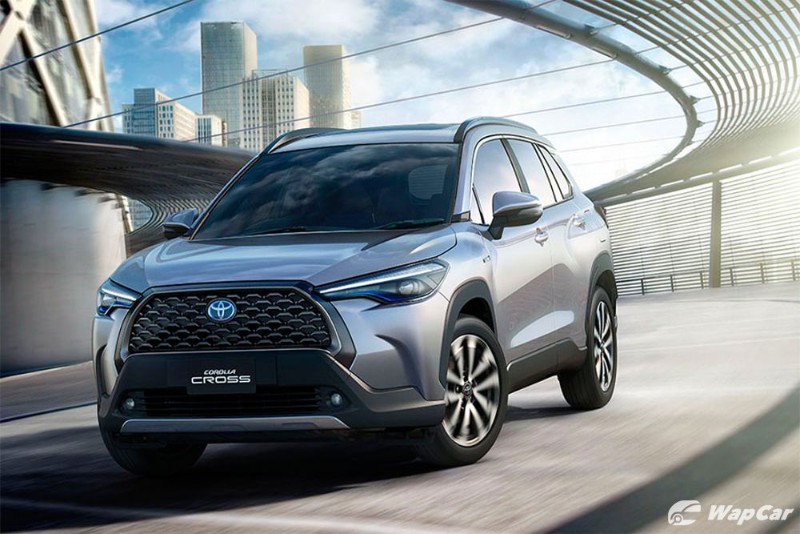 We’ll take a closer look at the dimensions and the powertrains for the Corolla Cross and see how it fares against the C-HR and the crossover leader, the Honda HR-V. 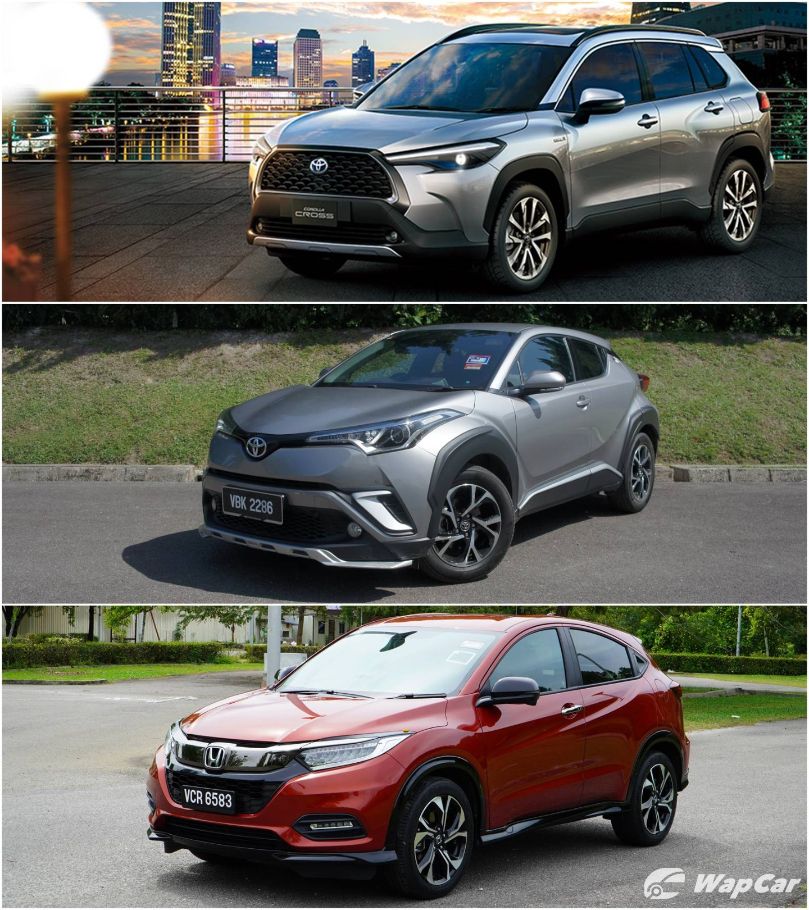 Take note that the specs that we are comparing here would be the Thai-spec Corolla Cross 1.8-litre petrol, the sole Malaysian-spec C-HR, and the top of the range HR-V RS. 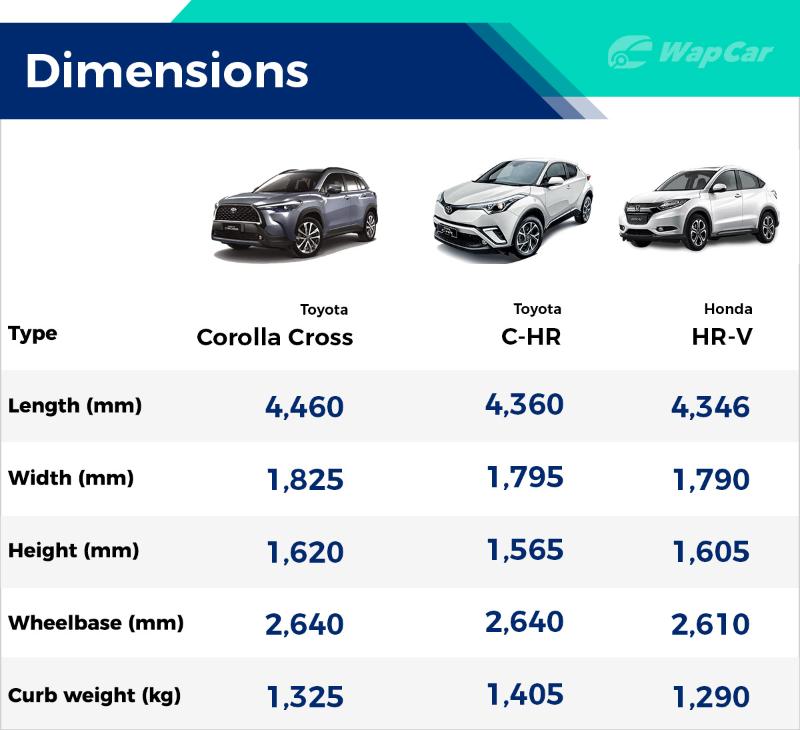 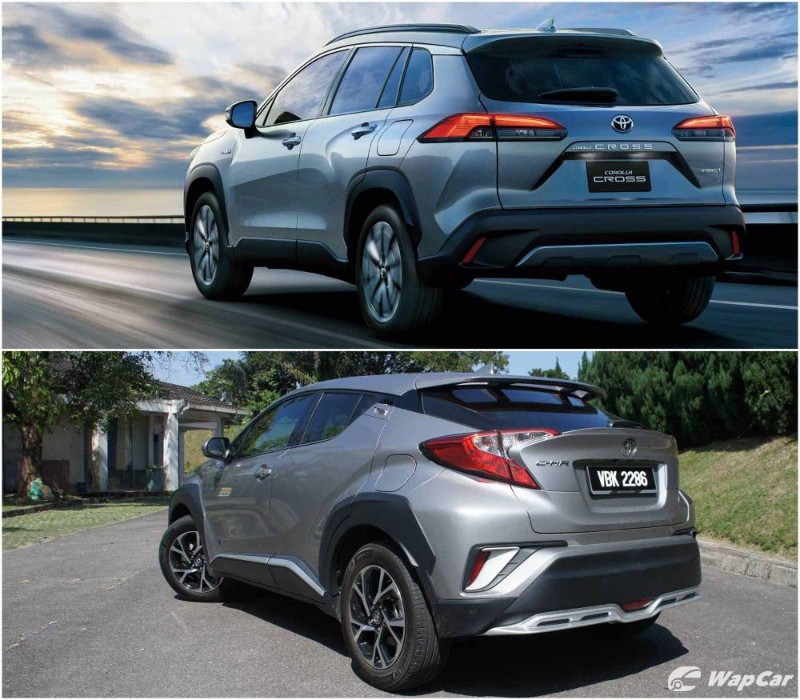 Performance – Sibling rivalry between the Corolla Cross and C-HR 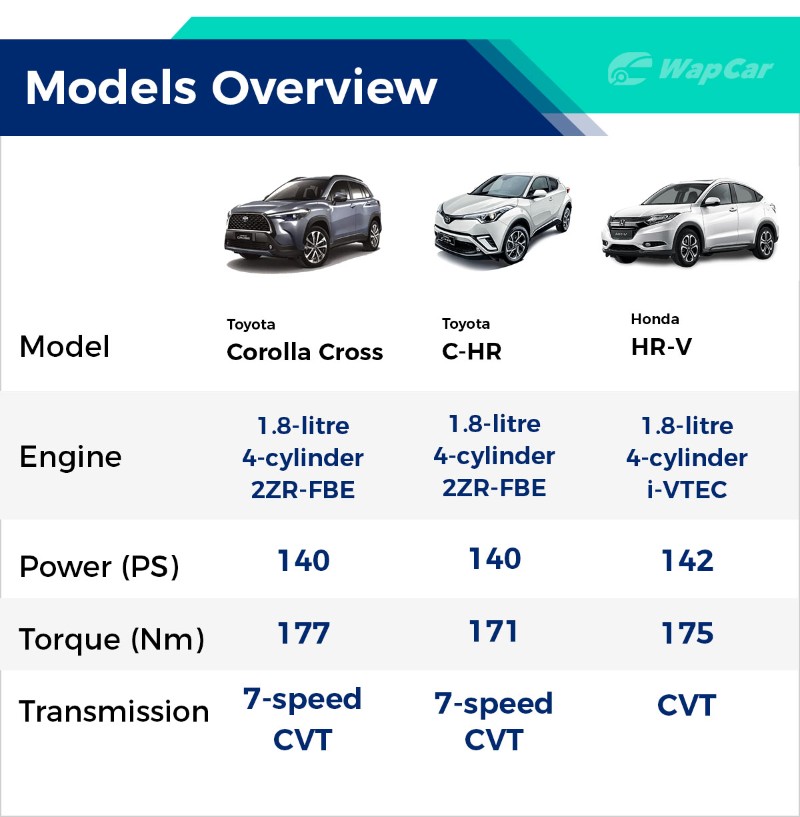 As the Corolla Cross shares the same engine as the C-HR, both have a similar output in power and torque. UMW Toyota Motor has hinted that the Corolla Cross sold in Malaysia would be assembled here. That means prices could undercut the Thai-made C-HR which costs RM 150,000 here. 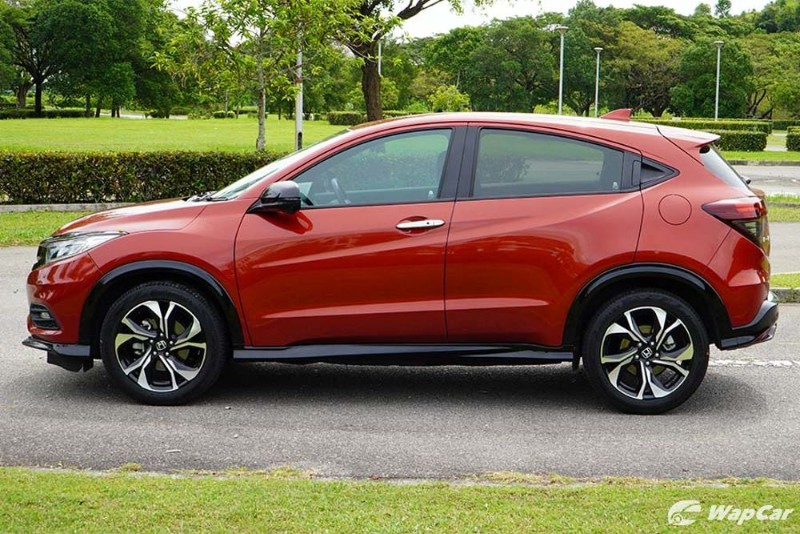 Meanwhile, the HR-V trumps the Toyotas in terms of power and torque. Malaysians are also generally attracted to the HR-V thanks to its lower price. Even the top of the range RS costs less than RM 120,000.

What else is there? 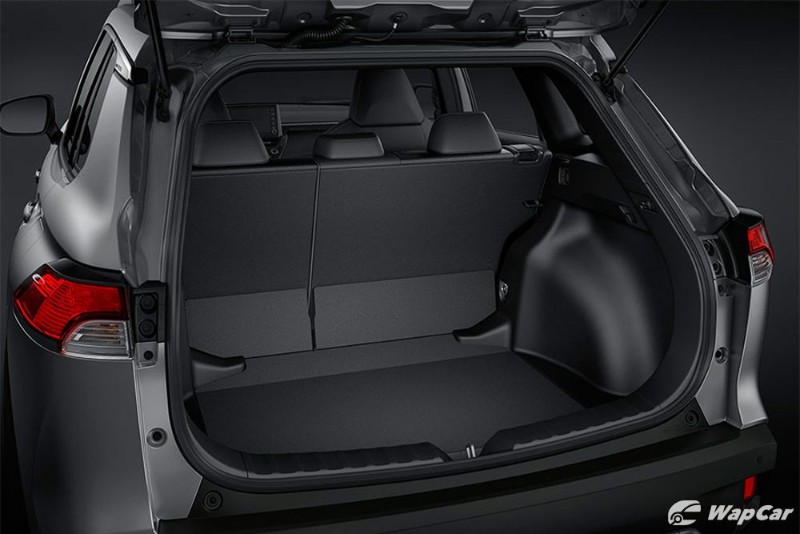 When it comes to the practicality and features, the Corolla Cross also beats both the C-HR and HR-V. The Corolla Cross has a very impressive 487-litre boot which is much bigger than the HR-V which has only 437 litres followed by its sibling rival, the C-HR which has a measly 388 litres. 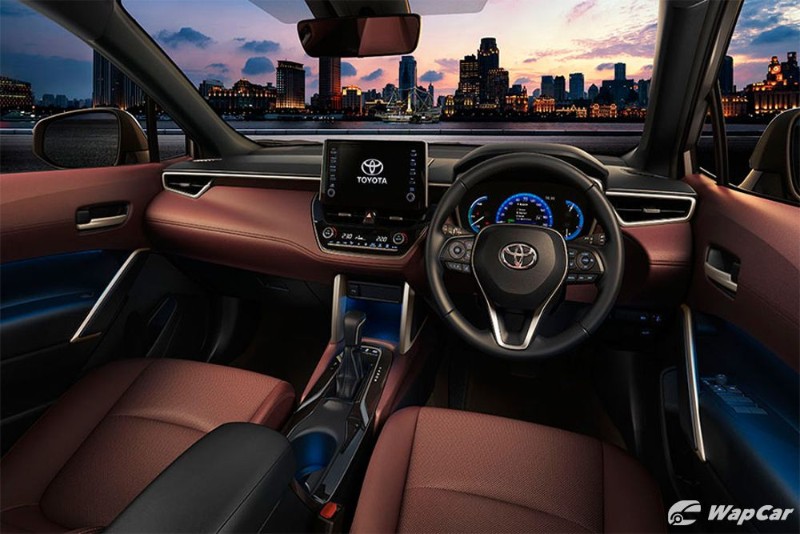 Even in the safety features, the Thai-spec Corolla Cross has loads of them including a full suite of ADAS for the top of the range model. This includes blind-spot monitor, rear cross-traffic alert, pre-collision safety system, lane departure alert with steering assist, adaptive cruise control with lane tracing assist, and automatic high beam.

Back at home, the local C-HR has blind-spot monitor and rear cross-traffic alert while the HR-V has LaneWatch camera for the V and RS trims. 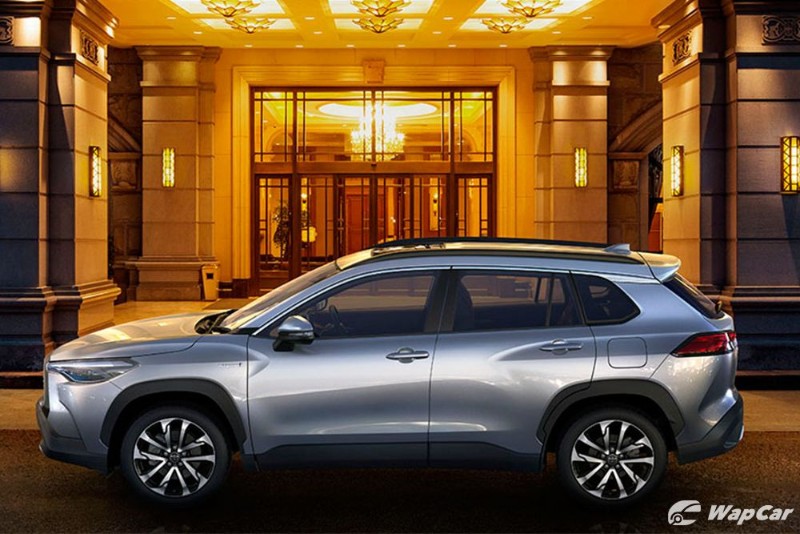 Personally I would choose the Corolla Cross over the other 2 just based on the specs and features. Whether you choose to hold on for the Corolla Cross to finally make its way here or just proceed with the 2 models that we currently have in Malaysia is entirely up to you.