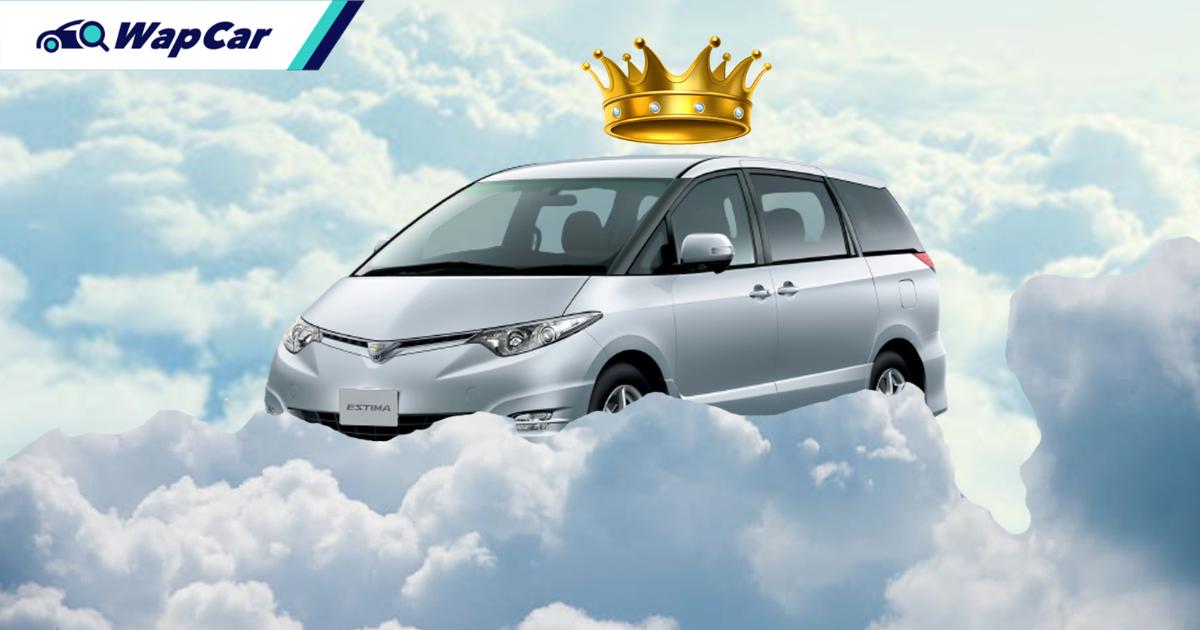 MPVs were once a hot commodity and none were as legendary as the Toyota Estima. The unique egg-shaped van was a favourite among Malaysian families, providing versatility and loads of space.

However, the legacy of Toyota’s eponymous MPV is sadly gone. Toyota quietly killed off the Estima in 2019 and few actually noticed its untimely death. 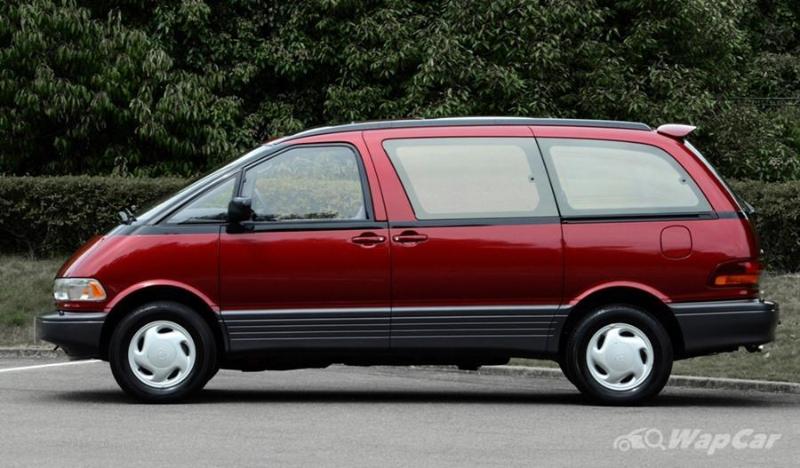 We’ve already waxed lyrical about how the first-gen Estima was a gamechanger (and deserves to be a modern classic). So, we’ll put the spotlight on the subsequent 2 generations of this family icon.

Second-gen Estima – From innovative to futuristic

When Toyota decided to launch the second-gen Estima, the quirky but also innovative first-gen was showing its age. Yes, the egg shape is cute but having only one rear sliding door when others were offering two was becoming a disadvantage. 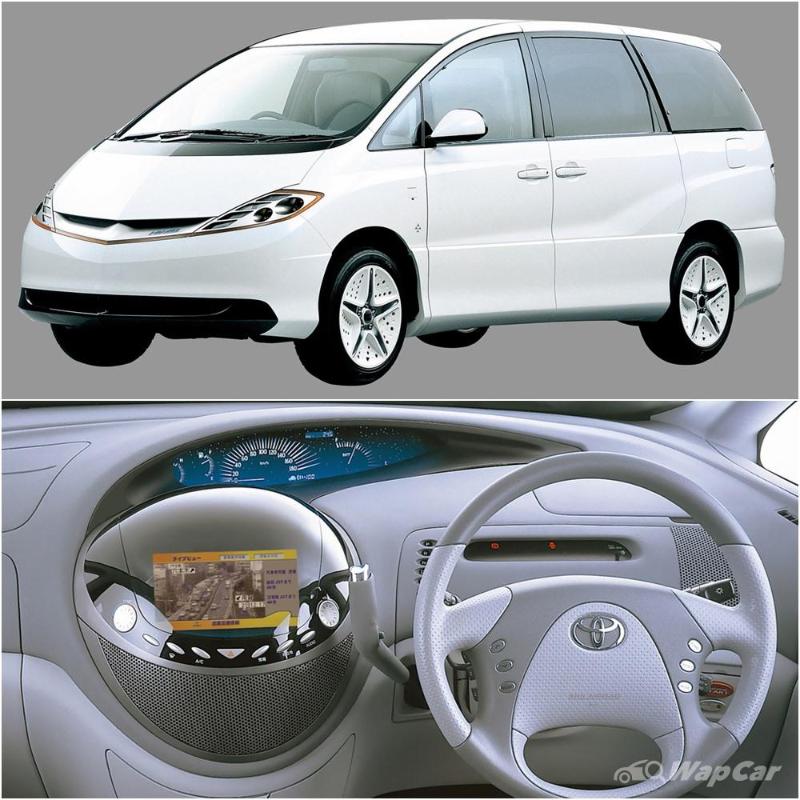 Toyota first previewed the next-gen Estima as the HV-M4 Concept at the 1999 Tokyo Motor Show. The egg shape is retained and the concept shows what is definitely the funkiest-looking dashboard of the nineties. The centre console featured a television screen in a bubble! 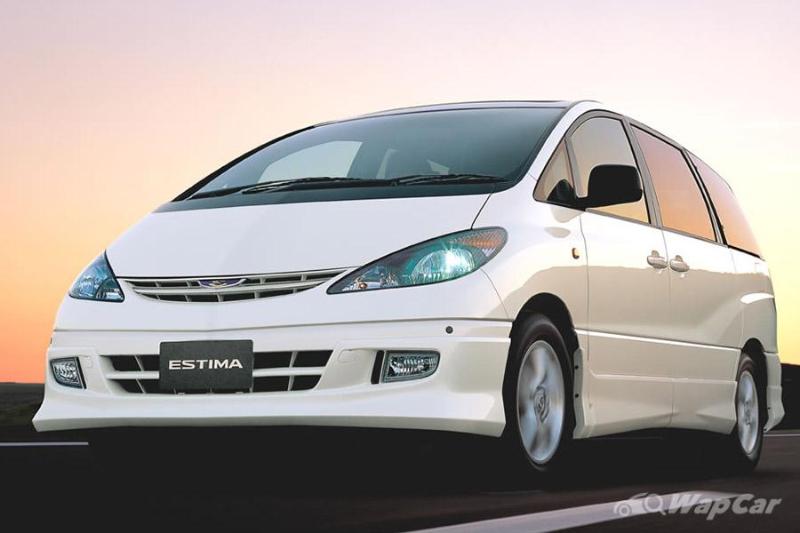 When it came to the production version of the second-gen Estima in 2000, the futuristic looks of the concept car were retained along with the funky dashboard. However, the TV screen was sadly removed. 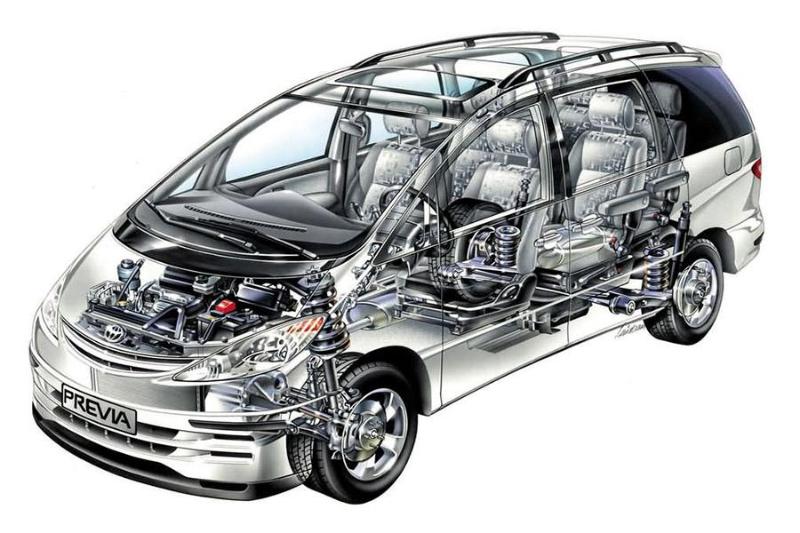 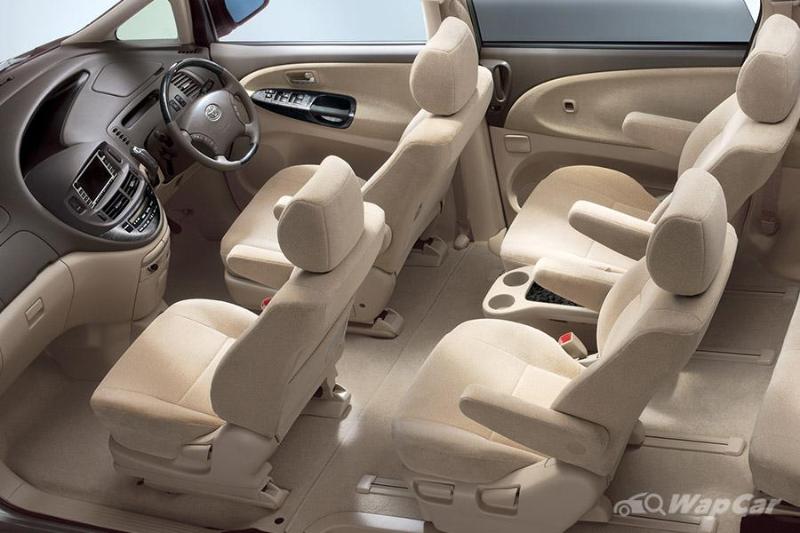 With this decision, however, Toyota has actually made improvements in the MPV’s spaciousness and comfort. In fact, the second-gen Estima was built on the Toyota K platform which was shared with the Camry at the time. 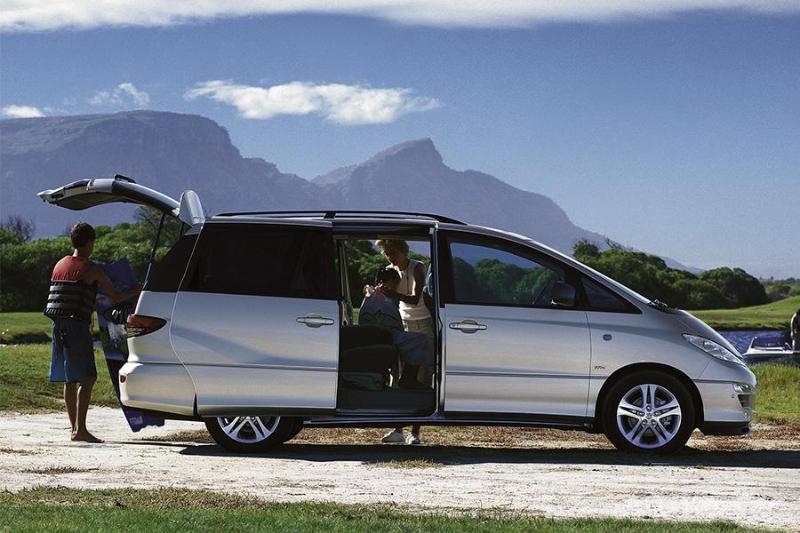 Another addition gained in the second-gen Estima was a pair of rear sliding doors. This easily puts the Estima as a viable choice among families. Enhancing the Estima’s practicality was the seating arrangement which was available in numerous folding configurations. 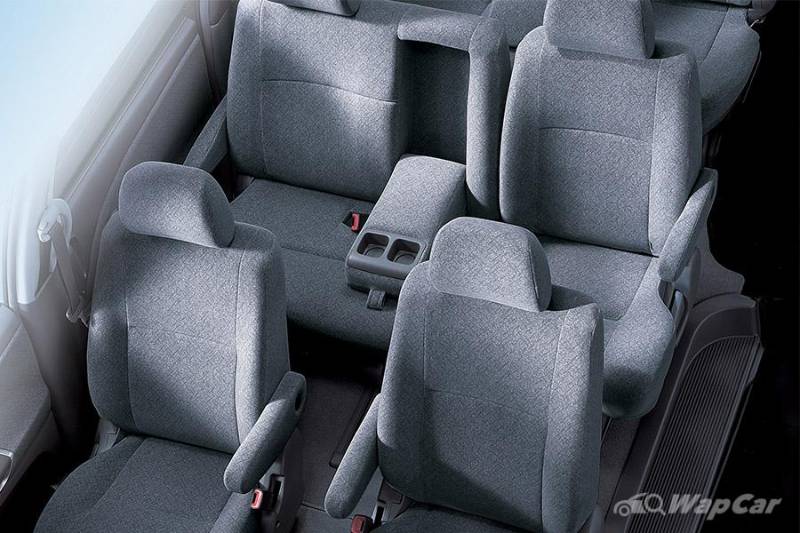 Just like the previous Estima, buyers can choose from 6-, 7-, or 8-seater configurations. On the other hand, it is noted that the second-gen Estima is narrower and lower than the previous-gen. 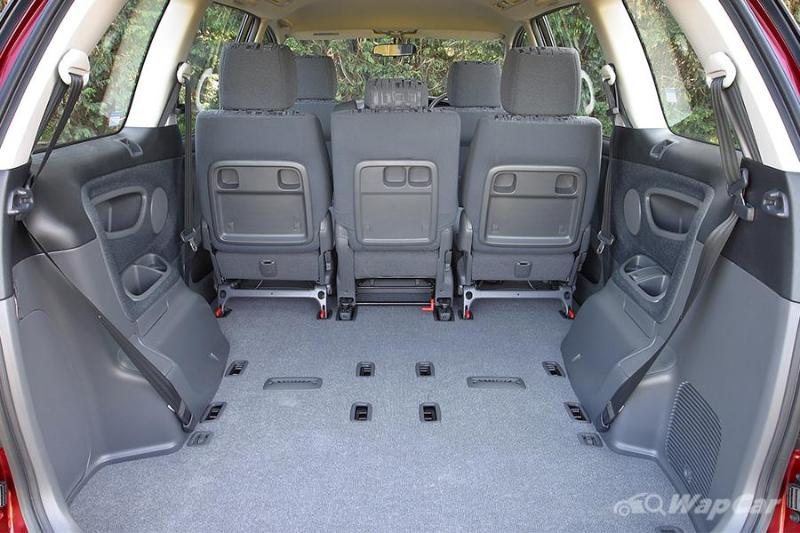 Inside, passengers are greeted with individual air-con and lights for comfort. But enough about passenger comfort, let’s talk about that funky dash! 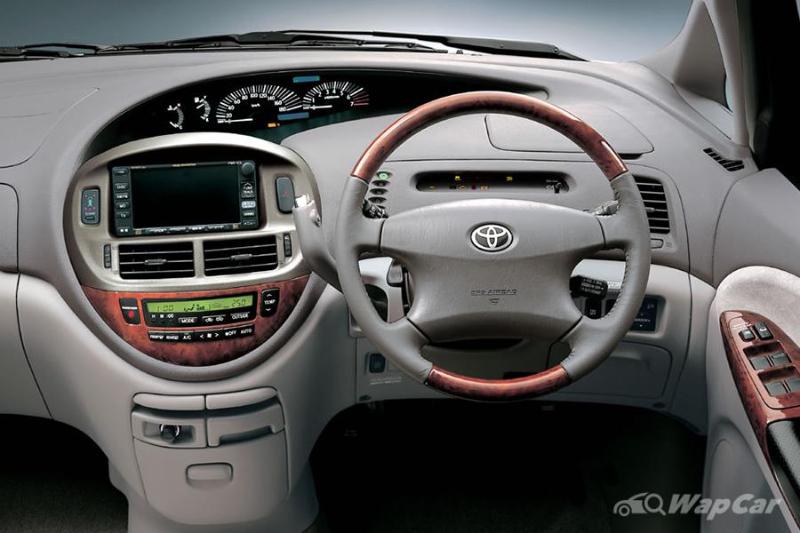 Outside Japan, the second-gen Estima was sold in Europe and Australia where it was called the Previa and Tarago respectively. The European-spec Previa was offered a 2.0-litre turbodiesel (116 PS/250 Nm) and a 2.4-litre petrol engine (156 PS/225 Nm). 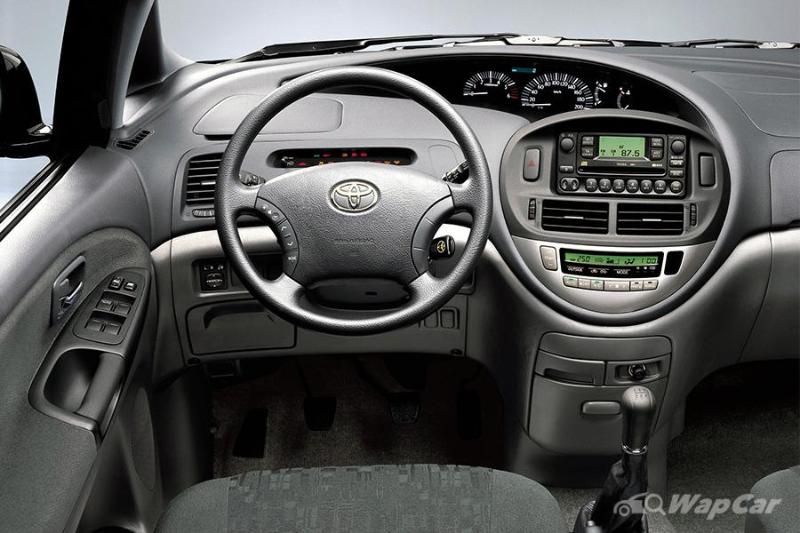 Both variants came with a 5-speed manual transmission as standard but a 4-speed automatic was optional for the petrol variant.

But it wasn’t meant to be for the Previa in Europe as this was the last generation sold there.

In Japan, the Estima was offered with a 2.4-litre engine, a 3.0-litre V6 (220 PS/294 Nm), and a hybrid powertrain. The Toyota Estima Hybrid was the world’s first hybrid MPV and set a precedent for hybrid MPVs in the next decade. 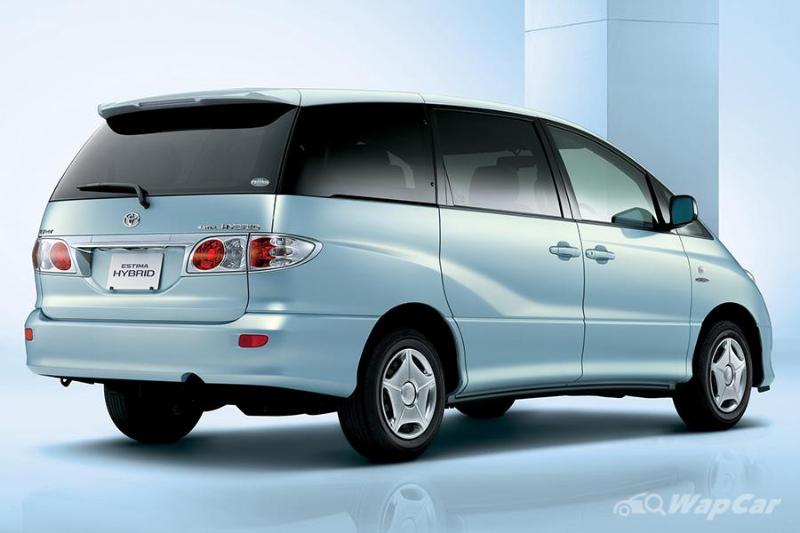 The Estima Hybrid was powered by a 2.4-litre petrol engine that was combined with 2 electric motors; one at the front, producing 17 PS, while the other was at the rear, producing 24 PS. 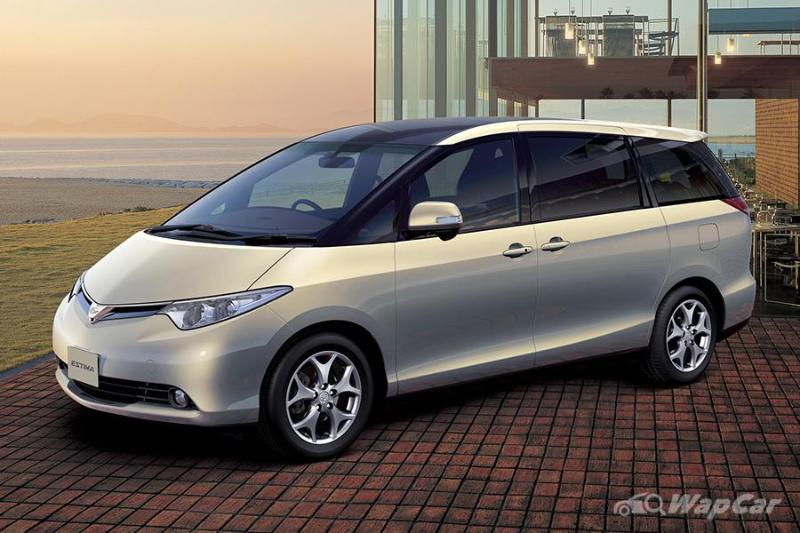 If the second-gen saw the Estima transformed into a futuristic MPV spaceship, the third-gen is essentially a slightly tweaked one. Toyota didn’t want to change the formula so all the elements that made the Estima what it was, remained. 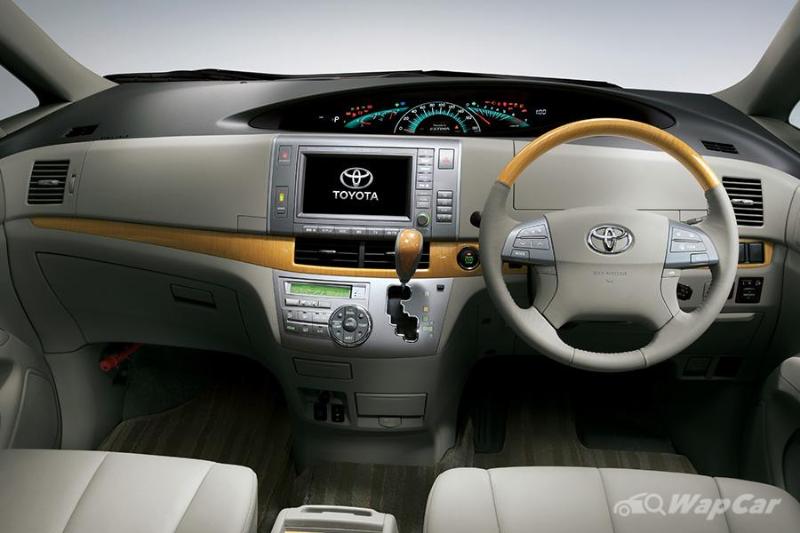 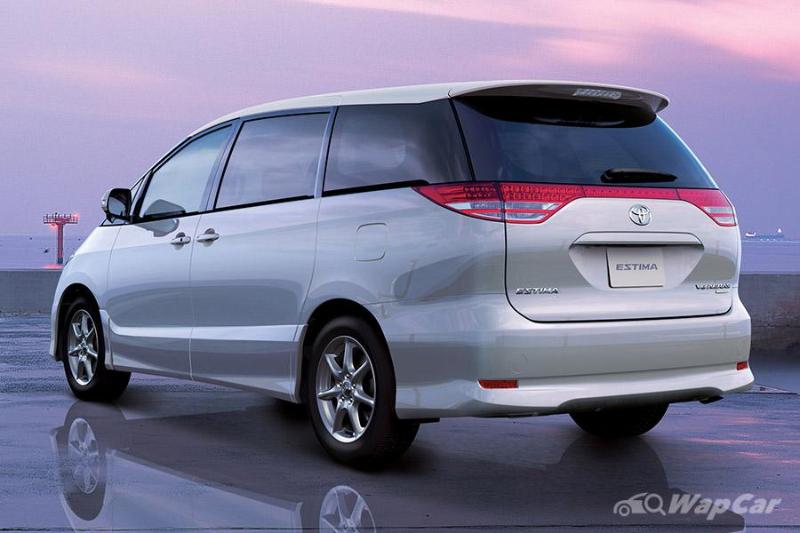 Launched in 2006, the third-gen Estima retained the same FF layout as its predecessor but gained a bigger engine in the process. The V6 engine was updated to a 3.5-litre 2GR-FE that produced 280 PS and 340 Nm. This was then mated to a 6-speed automatic. 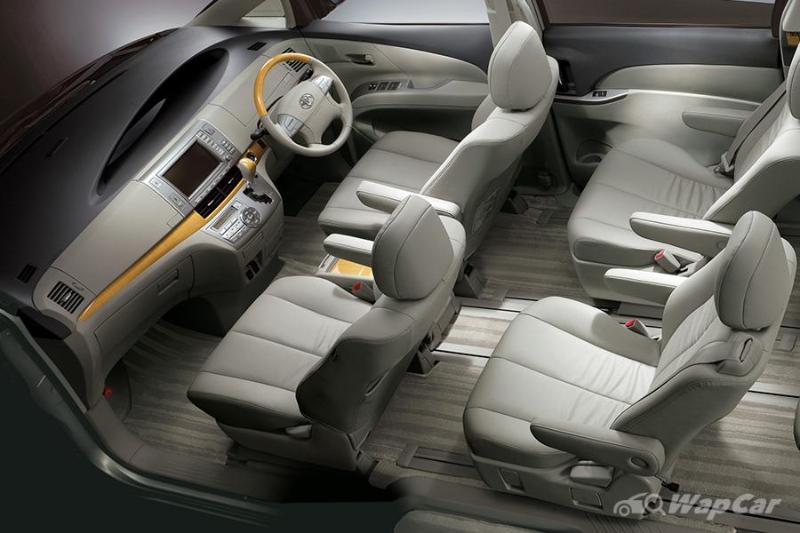 As standard, the third-gen Estima came with a 2.4-litre petrol engine. This time, power output was boosted to 170 PS and was paired to a 7-speed Super CVT-I gearbox with manual mode.

The third-generation Estima also became the first model to be sold officially in Malaysia under UMW Toyota (UMWT). Launched in 2014 but sold as the Previa, the MPV was priced from RM 258k. Only the 2.4-litre engine was offered but this was mated to a 4-speed automatic.

For a large MPV at that price, the Malaysian-spec Previa was lacking in features. While the Japanese Estima came with parking assist, lane-keep assist (LKA), and dynamic radar cruise control, all of these were notably absent in the Previa which came with 2 airbags. 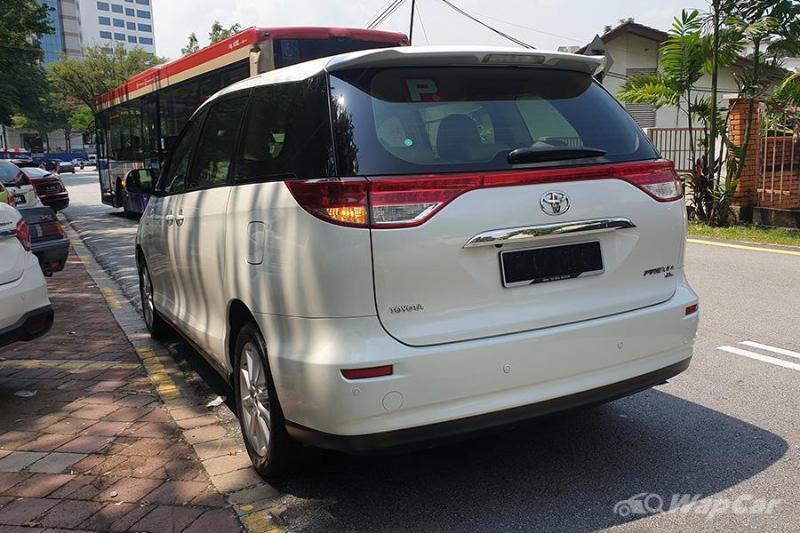 It came as no surprise that the Previa sold very poorly as Malaysians preferred the grey market Estima which offered more choices even if they were lacking some peace of mind like warranty coverage. UMWT quietly discontinued the Previa shortly thereafter. 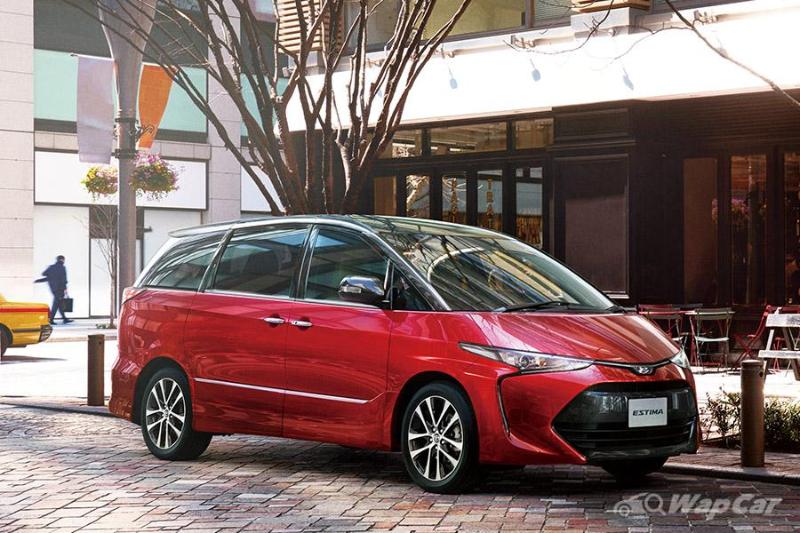 In 2016, the third-gen Estima was given an extensive facelift included the Toyota Safety Sense (TSS) ADAS suite which featured AEB, ACC, LKA, and BSM. 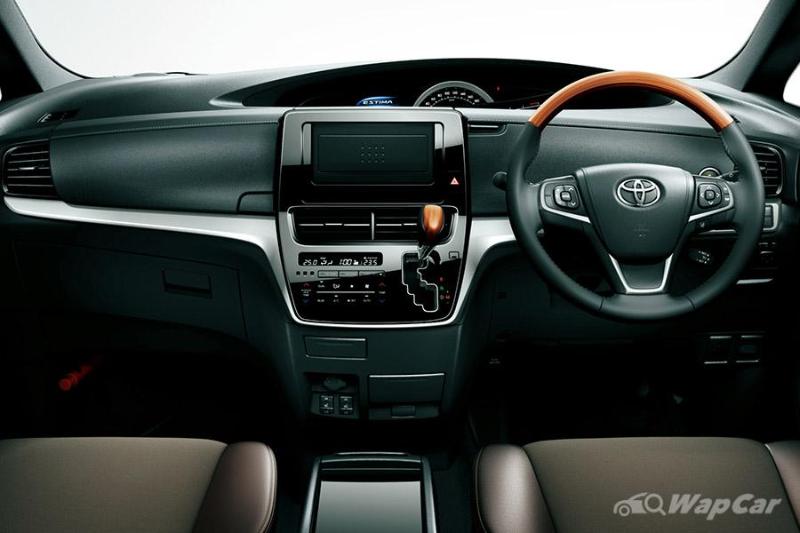 As the V6 engine was dropped, this facelift only offered two engine choices, a 2.4-litre petrol engine and a 2.4-litre hybrid engine. 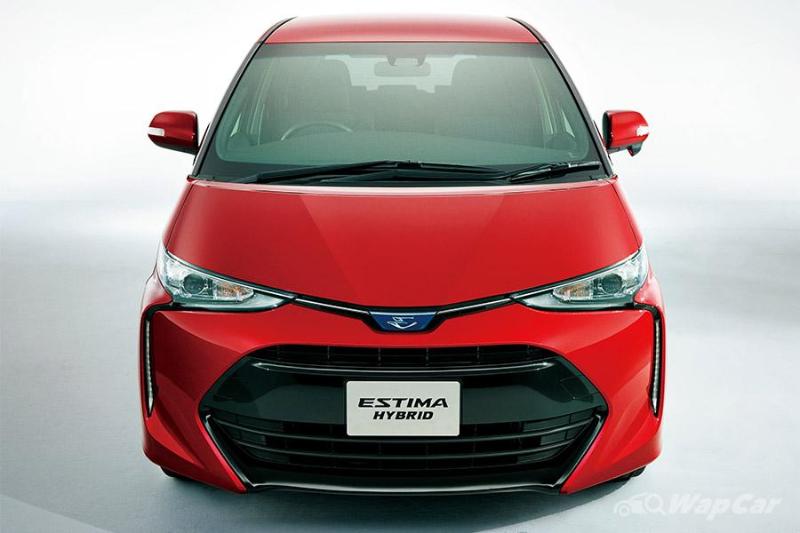 Aesthetically, the facelifted Estima was given a sharper front design that made it look like Darth Vader, except it wouldn’t want to choke you forcefully. 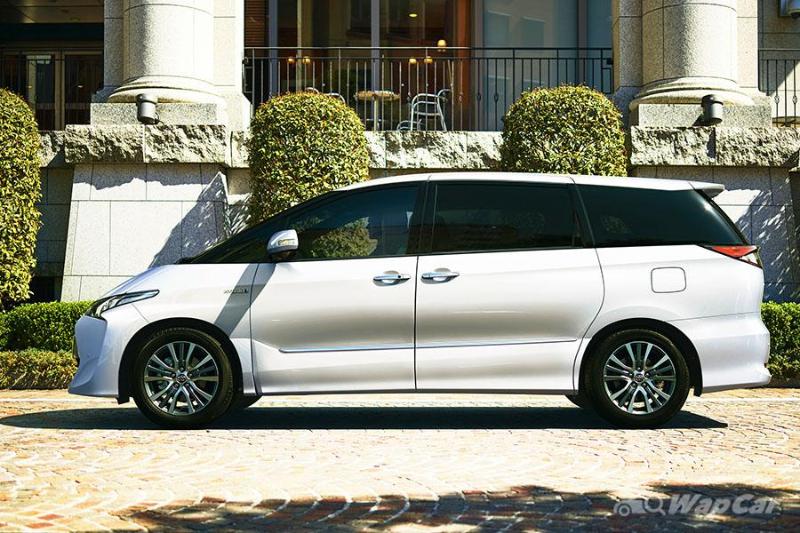 Speaking of harmless, the facelifted Estima was the first Toyota to come with anti-UV glass which allows for a cooler cabin. The Skin Cancer Foundation gave this feature its seal of recommendation and it has an SPF 50+ rating. 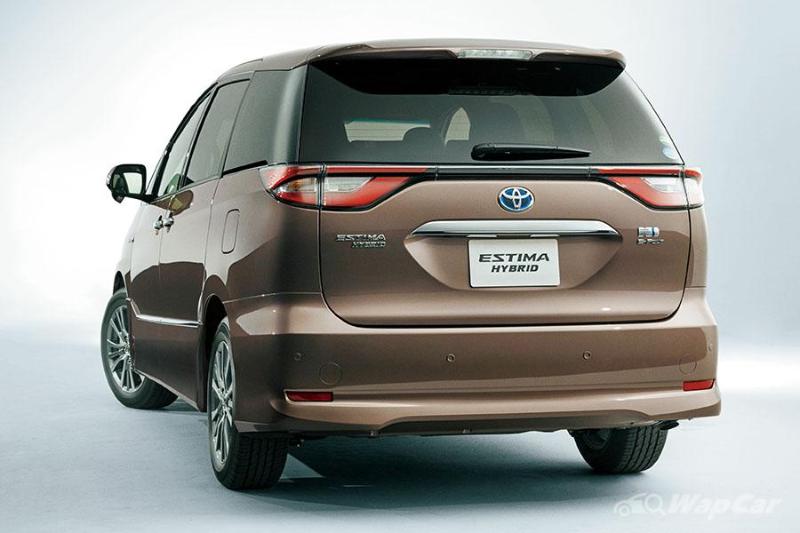 However, despite this extensive update, there's no hiding the fact that the third-gen Estima was an ageing MPV. Its popularity was also waning as most buyers prefer opting for the more luxurious Alphard/Vellfire.

The Estima only remained on sale in Japan but with monthly sales barely reaching 800 units, Toyota decided that it’s time to end the iconic egg-van. 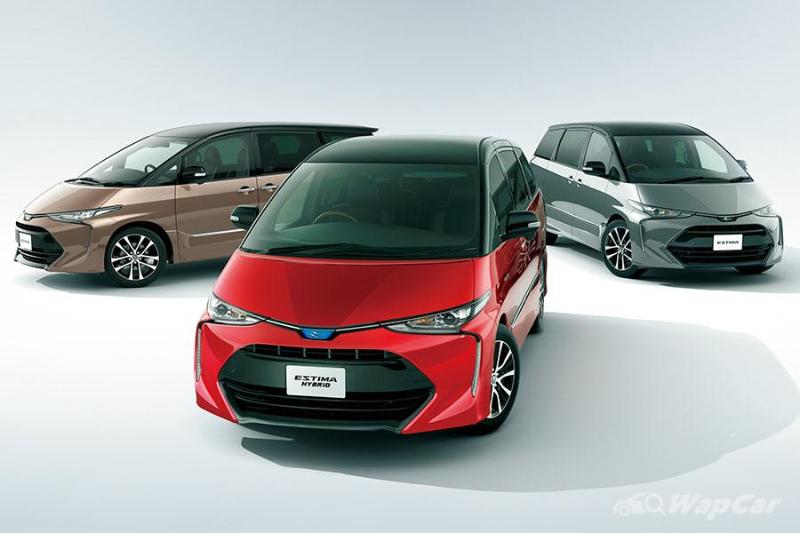 In 2019, Toyota did just that. The MPV that was once seen as a breath of fresh air with its unique and futuristic styling was killed off. In a period when MPV sales are going down worldwide, we will never see something like it again. 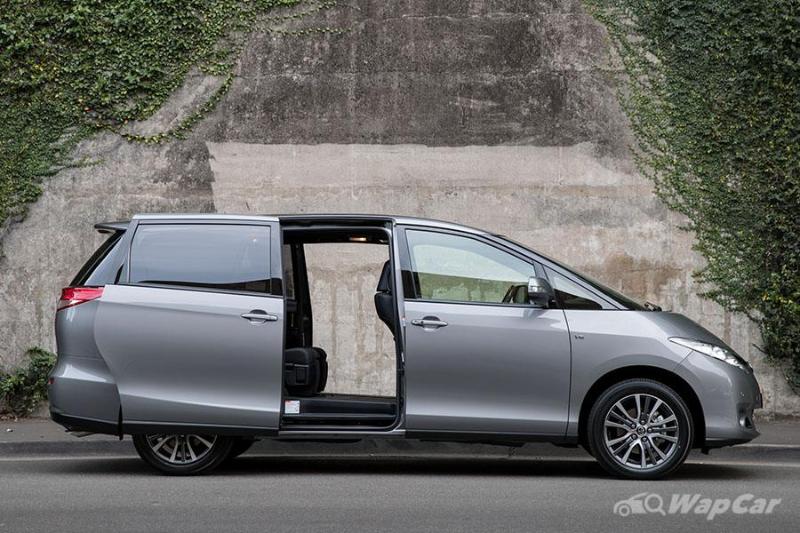 But once upon a time, the Estima truly ruled the road and was as beloved by the families who used it to ferry their kids.