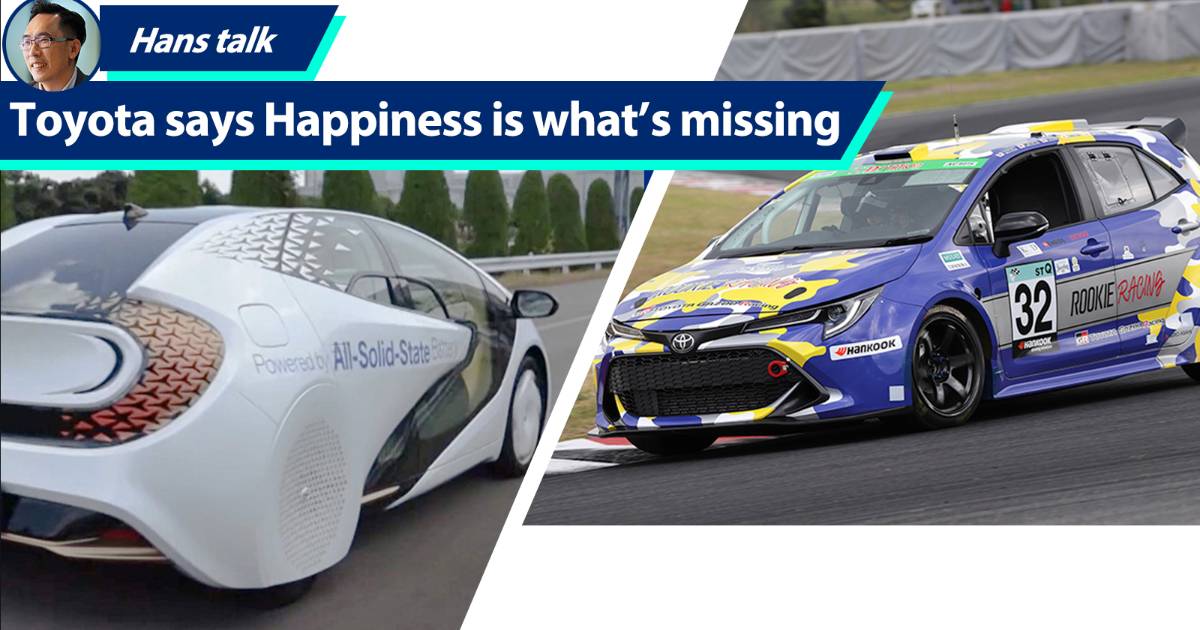 If you believe the vitriol propagated by many far-left leaning BEV fanatics, then Toyota is the bad boy that’s stopping the world from transitioning into a cleaner, all-electric future.

According to them, Toyota is lobbying to the US government so it can continue selling hybrids, which they say will delay the transition to battery electric vehicles (BEVs).

That’s a very odd accusation though, because Toyota's actual message was that BEVs take too long to achieve the intended carbon reduction effect, and if governments are serious about carbon neutrality, they need to consider other alternatives that work can be pushed out faster, on a much bigger scale, and can also address current cars on the road. More on that later.

Never mind hybrid or electric cars, Toyota is already preparing for a future that doesn’t need cars. This is because the true measure of a sustainable city is not whether it uses electric cars or not, but how clean and how efficient are its public transport, and how accessible it is to the underprivileged, including the old and disabled.

To speed up development of such non-car solutions, Toyota needs a city where it can test its concept electric commuter pods, parcel delivery robots, and driverless buses in all weather conditions, all types of traffic, on a big scale.

But which city council in the world would agree to freeze safety regulations so Toyota can do this. Like all tests, mishaps are bound to happen.

Toyota’s future is one with no / minimal cars

The privately-owned Toyota Woven City in Susono, in the Shizuoka prefecture, is the company's solution. Yes, because governments work too slow, Toyota is building its own green city, powered by clean hydrogen.

Located at the base of Mount Fuji, Woven City is the world’s only living laboratory of its kind, where the city’s 2,000 plus residents, most of them Toyota employees and scientists from partner organizations, will test out new mobility and clean energy solutions in the real-world.

Woven City will be a dramatic change for Toyota, which will transition from being a car company, to a true mobility company.

Take a pause and ask yourself, is Woven City consistent with a company that is lobbying governments of the world to delay BEVs so it can sell more engines?

At the last 2019 Tokyo Motor Show, show goers asked Toyota, “Where are the cars?”, because Toyota’s booth had not even a single car.

Instead, Toyota showcased vehicles like the e-Palette, a driverless BEV mini bus designed to be accessible even for the wheelchair bound, and the T-HR3 humanoid robot to assist the elderly living alone.

Mobility for Everyone is Toyota’s other tagline. Where others stopped at carbon reduction, Toyota chose altruism. It wants to ensure that as the world move towards electric mobility, no one is left behind, and green mobility cannot be something that only the rich (or able-bodied young) can brag about.

Instead of cars, residents of Woven City will travel in driverless e-Palette and zip around in sci-fi style commuter pods like the i-Road, or electric scooters, some of the them made to pull wheelchairs. 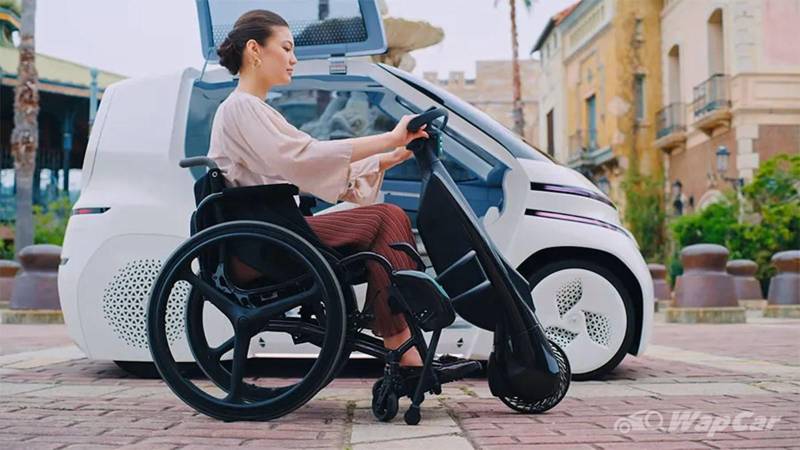 Why no cars? Because at the core of the UNDP's solution for low carbon cities is not electric cars, which still rely on fossil fuel power plants, but public transport. Regardless of powertrain type, public transport is much greener than BEVs.

At home, Woven City residents will be aided by Toyota’s range of AI-enabled robots, because as the world grapples with the problem of an ageing society (which Malaysia will be one by 2030), it has to explore new solutions for home care.

“We have wrestled with environmental issues all along, but I think our main priority had been conforming to the regulations of each country and region. When SDGs (United Nations Sustainable Development Goals) came into the picture, I hoped mobility would be something that will be pursued by everyone forever, and my desire to provide the freedom of mobility to everyone strengthened all the more [based on the idea of “not leaving a single person behind” in the SDGs].

“Another thing I thought of, regarding the SDGs, is that everyone is living on the same planet. We have been promoting “minus emissions” instead of “zero emissions,” and my desire to make Toyota a company that will be acknowledged as a company that focuses not only on certain regions, but the entire earth as its “home planet” was enhanced.”

Woven City is not some idealistic artist’s sketch of a futuristic city, but is currently under construction at the grounds of Toyota’s former Higashi-Fuji plant, and the first phase will be completed in 2025.

At the Woven City's announcement in CES 2020 in Las Vegas, Akio Toyoda said, "So by now, you could be thinking 'Has this guy lost his mind? Is he like a Japanese version of Willy Wonka?' Perhaps. But I truly believe this is a project that can benefit everyone. Not just Toyota."

Then why has Toyota lobbied against electric cars?

Toyota is a large corporation with a rather monolithic image. So it’s understandable if the regular outsider don’t see it as a fast adopter of the latest technology fad.

President Akio Toyoda candidly shared that even one of the company’s corporate auditing board commented, “It seems like Toyota doesn’t change, only thinking it should make those things that are necessary. Do you not know that it wasn’t the Neanderthals, but the Homo Sapiens that survived?”

To be clear, Toyota never lobbied to delay any green tech, that’s just a narrative that Elon Musk worshippers use to vilify anyone who is not like them. Toyota specifically mentioned that all cars must be made carbon neutral, including the ones that are already on the road. The last point was completely lost on BEV fanatics, who insist that everyone must buy a new car.

Toyota merely implored governments to stick to the objective, which is to cut carbon, not ramp up BEVs.

Toyota’s President Akio Toyoda, in his capacity of President of Japan Automobile Manufacturers Association (JAMA) said, “In pursuing carbon neutrality, carbon is our enemy, not the internal combustion engine. To reduce carbon, I believe there should be practical and sustainable solutions that fit the circumstances of each country and region.”

“The goal is carbon neutrality. Promoting BEV sales or banning gasoline cars is not in any way the goal. It is a must that cars already on the road (meaning used cars) be made carbon neutral (too)."

The latter refers to synthetic fuels, something which Toyota is working on. Toyota is testing a Corolla engine modified to burn hydrogen (not to be confused with hydrogen fuel cells, this one burns fuel).

If successful, zero emission is possible for many existing cars on the road, with some modifications. Just swap petrol with hydrogen, fill it up the same way, drive it the same way.

“Rather than narrowing the way out by placing importance on the creation of regulations focused only on new cars and internal combustion engines, it is necessary to expand the paths to carbon neutrality by including all approaches,” Akio Toyoda added.

Japan has been using hybrids since 1997. Despite having one of the lowest BEV adaption rates among OECD nations, Japan has been cutting emissions much faster than its peers, because cheaper and longer range hybrids - although not as clean as BEVs - are adopted on a much larger scale than BEVs can be rolled out.

Even Geely's EV expert Johan Hellsing gave a rare support for Toyota, saying that hybrids, which use smaller batteries, are a very effective solution because the biggest bottleneck to popularizing BEVs is battery supply.

Fun fact: Toyota is not a battery company but it knows more about batteries than many battery manufacturers.

Toyota works with Panasonic and CATL for batteries, just like Tesla but unlike Tesla, Toyota won't buy something from a supplier without understanding the A-Z of it better than its supplier. This is necessary to maintain control and quality. But attaining this level of knowledge takes time.

To understand battery reliability, Toyota had to study how electrolytes inside the battery degrade over time but the particles involved are too small for even electron microscopes. Nobody has observed in real time what happens inside a Li-ion battery when it charges/discharges.

So Toyota studied quantum physics, built its own undulator beamline at Japan's SPring-8 synchrotron radiation facility. It's basically the world's first method to observe on a particle level, exactly how ions flow inside a battery and how it breaks down.

Toyota's BEV will come when they can make it as cheap and as reliable as a Toyota Corolla. 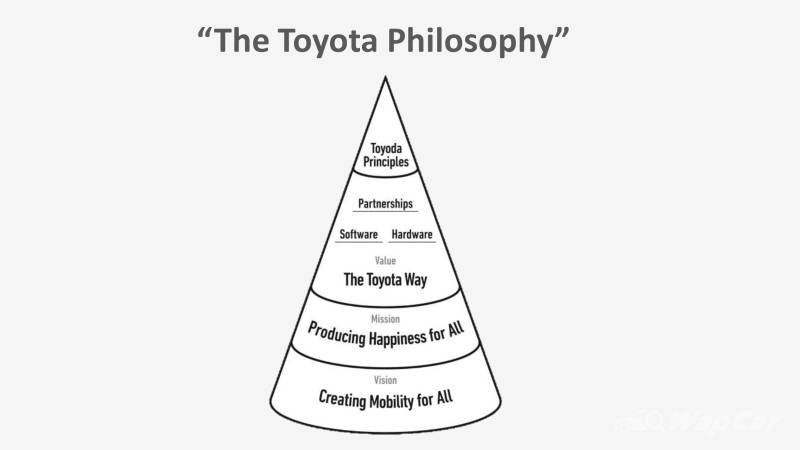 No one is to be left behind. Everyone, rich or poor, able-bodied or special needs people. Carbon neutrality means nothing to the common man if it doesn’t make their lives better. 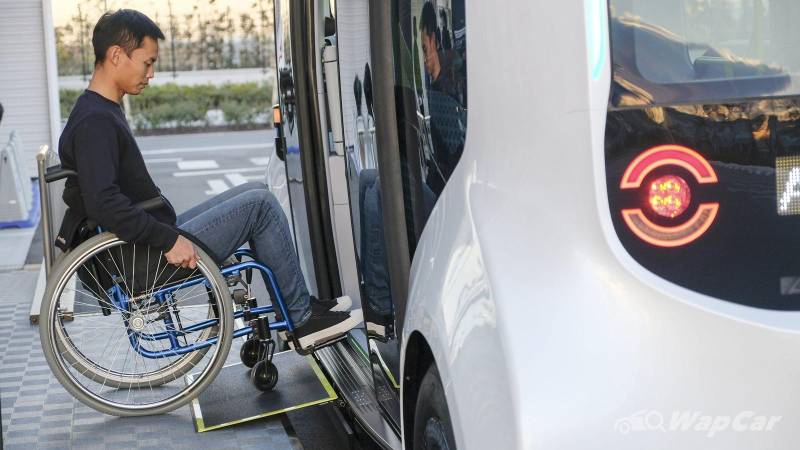 “Mobility comes from the word move. And move, I think has two aspects, which is moving from point A to point B. The other is emotional feeling, I am moved.” said Daisuke Toyoda, Senior Vice President of Woven Planet. Yes, Daisuke is Akio’s son.

At a recent meeting with shareholders in June 2021, President Akio Toyoda said:

“The Toyota Philosophy, which we compiled last year, also defined our mission as “producing happiness for all”.

“I believe that happiness can take various forms depending on the person. “Producing happiness for all” does not mean producing the same thing for everyone. Thinking through diversification and engaging in high-mix, low-volume production is the kind of “production of happiness for all” for which we aim,” he said. The last part is a big shift in thinking for a high volume manufacturer like Toyota, which prizes efficiency and standardization.

“Looking at the 17 Social Development Goals (SDGs) as a set of squares laid out in three rows of six, you will see that the space for the last square is empty. It might be a decidedly arbitrary way of looking at it, but I believe that people’s happiness is the 18th goal.

“I interpret this to mean that only people who seriously strive to realize the (established 17) goals will be able to see a world of the 18th goal.”

At a time when many motor shows have become so boring because every other manufacturer is repeating the same trope - electric vehicles, car sharing, driverless cars, mobility as a service - Toyota is the only one that is showing some original, practical thinking to build a better future, even if it gets vilified by Tesla-driving greenies.

You can take Audi’s presentation, swap it with Mercedes-Benz, BMW, or Volvo, and it will still be saying the same thing, but not Toyota’s.

At the ground breaking ceremony of Woven City in on Japan’s Mount Fuji Day on 23- February 2021, President Toyoda said:

“I realize that our dream is ambitious. I know there are skeptics… some even work for Toyota!

About his opinion on the UN's 17 SDGS, Akio Toyoda added, “In fact, if it were up to me… I would add an eighteenth goal to the SDG list: Happiness. Because no matter where we live, happiness is something we all desire, and we all deserve….

“And I want this to be the goal and the guiding light for everything we build and create at the Woven City.”

The 18-minute video below is very worth your time.