HomeNewsToyota was nearly kicked out of Thailand, yet 60 years on and the Hilux is now their 'national car', how?

Toyota was nearly kicked out of Thailand, yet 60 years on and the Hilux is now their 'national car', how? 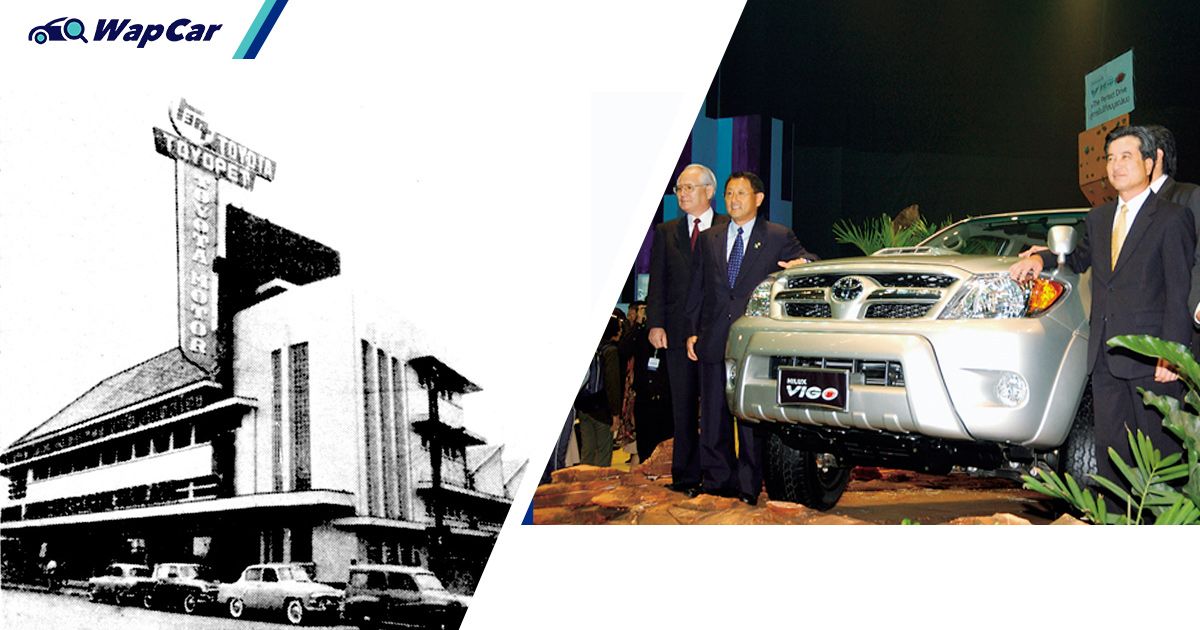 As far as appearances are concerned, few can make it more memorable than Akio Toyoda, who ventured onto the Queen Sirikit Convention Centre's expansive stage in a lowered, bespoilered, matte gray Toyota Hilux. 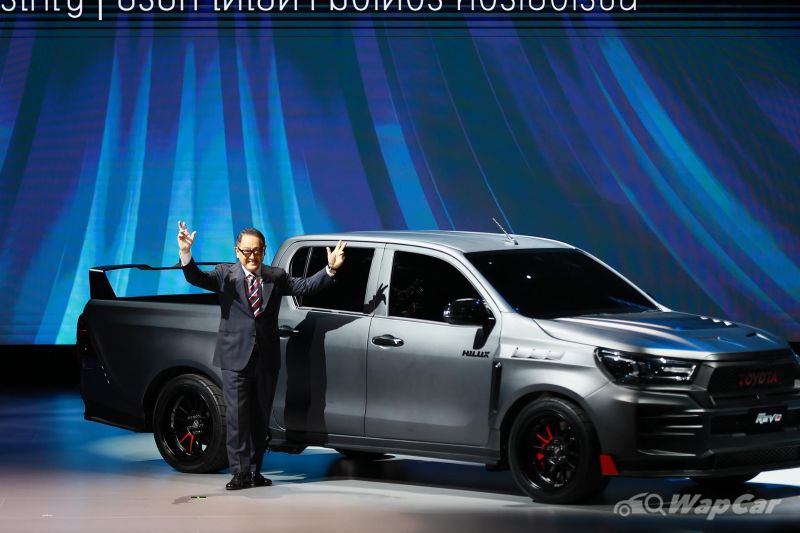 On the surface it looks like an odd move. Photos from this event will be circulated a million times over, so why not show your latest and greatest? Car fans will know Mr. Toyoda and the company he helms don't quite follow conventions; these days this looks like not committing to a full-EV lineup, back then it means never giving up, despite very nearly being booted out of the very country they celebrate their Diamond Jubilee in this year.

As you would a ripe chukanan, Toyota struck while no one was paying attention. Company sources state that "advanced Western manufacturers skimped on their own work" in South East Asia, and Toyota opened their first representative office in Bangkok in 1957.

Buoyed by the postwar economic boom and with three policies in mind – establishing an aftersales system before sales, lowering reliance on trading companies, and skirting direct competition with American brands – Toyota became the first Japanese automobile company to have a foreign base after World War 2.

The office was set up to be the command centre for the South East Asian market. Now directly managed by the Japan HQ, growth was swift, with prime products being semi knocked-down (SKD) trucks from Japan.

Come 1961, Thailand's government would set the Automobile Industry Promotion policy in motion, the effect of which made making locally-assembled (CKD) vehicles cheaper. Historians regard this to be the proper beginning of Thailand's leviathan car market today.

That, plus the 1962 introduction of friendlier taxation measures and an increase in entry visas for engineers provided further benefits for the car production industry. The iron is hot, and Toyota struck CKD production proper in October that year, forming Toyota Motor Thailand Co. Ltd. (TMT).

Chipping away with small-scale production runs of the Hilux and Corolla, TMT would later open the Samrong, Samut Prakan plant on 10-February 1964. It was their second overseas plant after one in Brazil that was opened in 1959.

By the way, the Samrong plant is still around, making today's Hilux and Fortuner.

Also read: For under RM 150k, the Toyota Corolla Altis is superior to all in comfort

By the end of the '60s, you could say that Toyota was growing in tandem with Thailand's auto industry. Preferential policies saw the introduction of many competitors (11 carmakers began CKD work there by 1969), yet by the end of the same year Toyota sold 10,700 cars – capturing the top share of the market, with 22 percent.

Problems would pop up in the 1970s. Distrust against Japanese companies – headlines now portray them as taking advantage of cheap labour in Thailand, among other things – led to a widespread anti-Japan sentiment, culminating in the boycott of Japanese products.

Public ire engulfed major brands. Whether its food or tech devices didn't matter; the fear that the Kingdom was merely being used as Japan's shadow economy was palpable. Executives now faced a dilemma, "Do we double down, or do we do what's safe?"

Boonsiti Chokwatana, CEO of Saha Group, was there to witness many companies take the highway.

"Rather than putting down roots in Thailand, it was easy to see that they wanted to recover their investment as quickly as possible, and the personnel they dispatched were eager to go back to Japan. As a result, there was little sense of what we now call corporate social responsibility," he said in an interview with Nikkei Asia.

Saha Group is one of Thailand's largest conglomerates, dealing in consumer products and manufacturing.

Naturally Toyota, which undoubtedly played in a part that in a time that saw three out of four cars sold in Thailand were Japanese, also had to make a choice. Luckily for them, Yukiyasu "Yuki" Togo was in town, spearheading TMT.

What did he do? Take to the streets and beg.

On the heart of the matter

Togo-san was quite unlike most Japanese executives Toyota had in the past. His first years in Toyota was not as a white-collar salaryman, but instead as a rally car driver, in which he was relatively successful. Racing alongside his wife, Misako, his on-track career was stopped by a crash that left him limp.

Years later, 46 year-old Togo was sent to Thailand. Leading a company is hard enough, but helming it – and it was his first international stint no less – when the country you're doing business in is protesting against you is another challenge altogether.

His move was unheard of for a C-suite. Out goes the suit, and on comes the orange robe to go with his shaved head. Togo-san had become a Buddhist monk! Living as an ascetic for six weeks, begging for a bowl of rice everyday, allowed him to understand local culture on a granular level.

His efforts, later known as 'chameleon management' because he did other similar stunts in USA and Canada, helped reduce the Thais' opposition to Toyota, allowing the company to localise itself further.

One of the ways were opening stocks in Thailand. Local dealers now owned 11.5%, while banks and others made up another 6.5%.

Things progressed swiftly from thereon, and notable progress in the next decade saw Toyota producing diesel engines and more cars in the country. Though he was no longer around to see it, the seeds Togo-san planted would eventually culminate in 2001, when TMT was selected as No. 1 among local and foreign companies in a national survey.

Soluna and the IMV Project

Producing Cars for Thai by Thai was the message behind the 1997 Soluna. Such a car was now necessary because the Asian passenger car market was expected to grow, but imported Japanese cars became prohibitively expensive due to the high value of the Yen.

It was the first car to be sold under THB 350,000 and 28,000 units were booked in three days, but it will all be violently halted days later as the world went snout first into the ASEAN Financial Crisis of 1997. Car buying wasn't a priority now and Toyota was hit hard. Yet they didn't lay off a single employee, and the late King Bhumibol Adulyadej himself ordered a Soluna as a sign of appreciation.

As the tides blew over, Toyota was fast etching itself into the psyche of the Thais. For a company of their stature and size the goalposts have moved; it's not just about selling new cars anymore, but help foster economic growth.

In simple terms, this means making pick-up trucks and vans outside of Japan. Making a localised product means cheaper development costs, translating to relatively more affordable vehicles that the enterprising populace can use daily, for business or otherwise.

The idea is sound but execution wouldn't be so simple. Akio Toyoda recalls: "Unfortunately, when I got the job, the launch of this new pick-up was in big trouble and way behind schedule. And because I was quite young for such a position at the time, and I also happened to have the last name Toyoda, as you can imagine, there were plenty of people in Japan placing bets on whether the project would fail. But I was determined to show them wrong."

Long story short, genchi genbutsu (Japanese for 'go and see for yourself') did the trick. He then travelled to Thailand, met with engineers on ground, made quick decisions, and the Hilux Vigo was launched bang on schedule in August 2004.

The management philosophies of Akio Toyoda that people study today, he credits to the development of the Hilux Vigo.

To say it was a runaway success is to massively downplay things. Competitive pricing, a broad range of bodystyles and features meant that its bed would be the foundation where industrious Thais would build their country on.

Also read: 10 years ago, Mercedes took the G-Class to Australia’s toughest route, only to be trolled by a Toyota Hilux

The Hilux would go on to be the Kingdom's best-selling car for 11 consecutive years up to 2016. Such was its popularity that it would be crowned Thailand's de-facto national car!

Tributes to a nation

Toyota's success in Thailand is also a story that goes beyond business. Any company can build cars – in the age of off-the-shelf EVs, it's ever easier – but it's always the attitude that sees you through for decades to come.

From toughing it out selling miniscule amounts of cars, to having a leader embody genchi genbutsu in the most extreme way shows gritty Toyota in its best light; ensuring they're not here to just sell cars, but sew themselves into the very fabric of Thailand.

Toyota Motor Thailand today is staffed by 275,000 people, and delves into education and corporate social responsiblity, sustainability, and even in the food business, where they produce sustainable coffees and also rice.