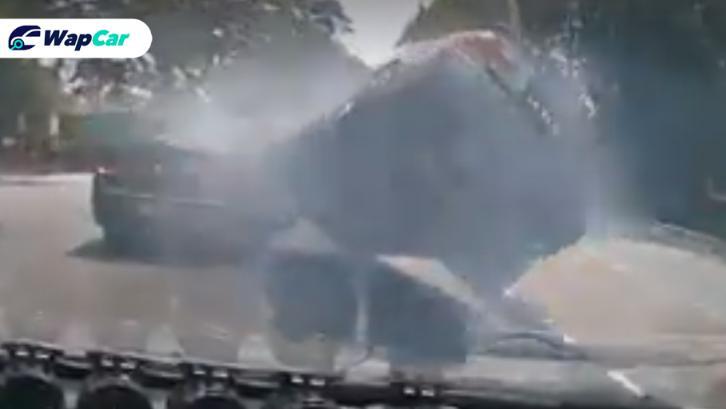 How many road misdeeds can be caught on one 30-second? The answer is a lot! As is seen in this video of a Honda Civic crash with a Peugeot 408. While we’re horrified by the crash, we can’t help but wonder what that escaping Proton Saga was doing.

While the Ministry and PDRM predicted that there will be a rise in road accidents when the country into Recovery Movement Control Order (RMCO), we did not expect accidents to happen just 2 days after.

While photos and videos of the Honda HR-V turned turtle was still circulating on social media, this video of another horrific crash along with the multiple road misdeeds surfaced.

The dashcam footage shows two cars speeding on a narrow main road, when a very slow-moving Peugeot 408 exited a junction trying to get to the furthest lane.

The car in front crashed into the Peugeot, sending the Peugeot rolling toward the far side of the road and crashing into a Proton Saga.

But it didn’t stop there, the Peugeot can be seen reversing aggressively and the sound of a crash could be heard on the dashcam footage.

While the driver of the car with the dashcam was heard rushing out of the car, the camera continued filming and caught the damaged Proton Saga reversing away getting ready to make a U-turn.

There were plenty of wrong doing like the two cars speeding on a narrow road and the Peugeot 408 exiting the junction while trying to reach for the opening further along the road. We suspect the 408 was trying to make a U-turn after exiting from the junction hence why the driver had driven so slowly.

And what about the Proton Saga that was facing the wrong direction and trying to sneakily escape from the scene?

No other info has yet surfaced on the internet, but this is going to be an interesting story to tell!