Why I Buy: A beefy, comfortable & refined cruiser — My 2019 Kia Sorento

** This article is the personal experience of a 2019 Kia Sorento and does not necessarily reflect the views of WapCar. 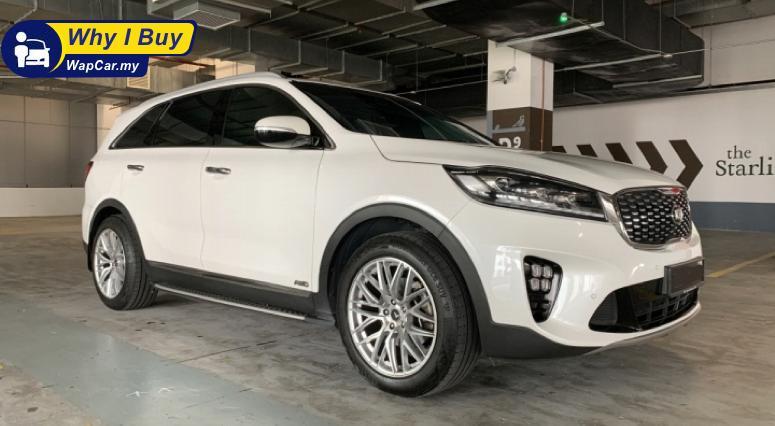 When I first caught glimpse of the facelifted Kia Sorento on a brochure on a particular site, I didn’t really think it looked attractive. Its design reminded me somewhat of a Ssangyong Rexton, the oddball old Korean sort of look before Europeans influenced their design language. 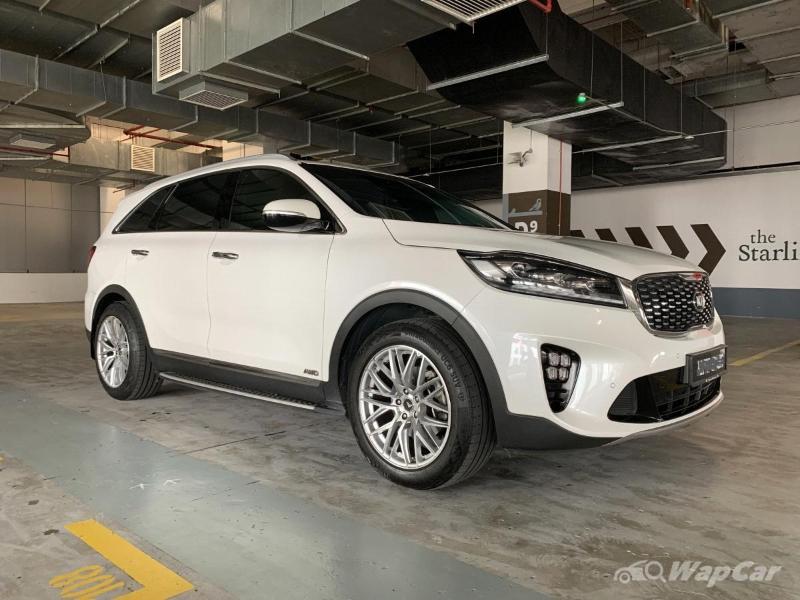 On one fateful day in April 2019, I walked into the Malaysia Auto fair and saw a gray (Titanium Graphite they called it) unit on display. First impressions, it didn’t look as bad, it’s has pleasing proportions for a D-segment SUV. In the flesh, it has the silhouette that is more reminisce of older American GMC SUVs which I kind of liked.

I then managed to secure a test drive and the rest they say is history. I traded in my Optima K5 for yet another Kia. I had a relatively good trade in price for the car and there was promotion for the Sorento which amounted to 13K discount from RRP of 183,333 plus 3 years free servicing so I thought this was a good deal. 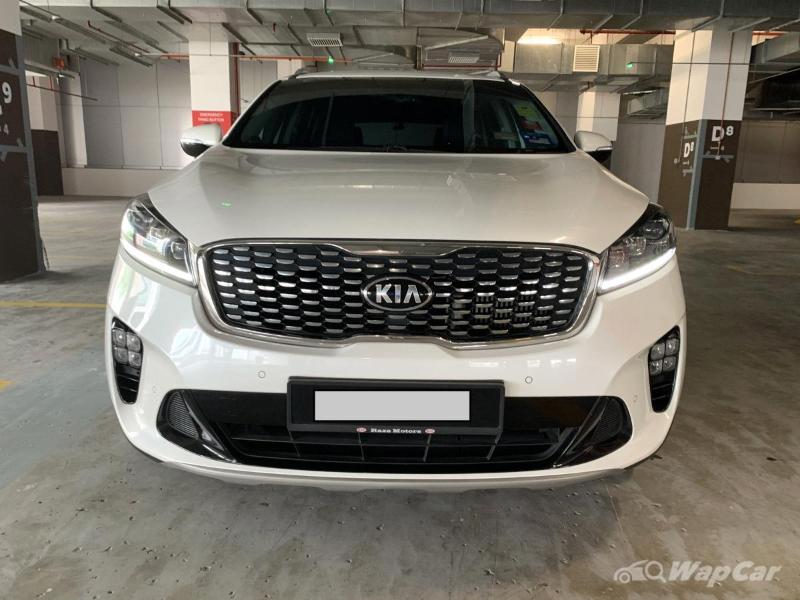 I got the car on May 2019 a white unit as there was no more greys available and have been owning it ever since so let me give you a low-down how is it to live with this car. Kia Malaysia only brought in one variant of this facelifted model, and it is the SX variant.

Technically it has the looks of a GT-Line (The top-of-the-line Sorento overseas) but minus all driver aids, twin exhaust pipes, the Nappa leather, 8-inch Harman Kardon Infotainment display (SX comes with 7-inch display) and some premium garnishing in the interior. Other than that, it sports the same tried and tested 2.2-liter R turbodiesel mated to an 8-speed in- house built automatic transmission with Auto Hold. It also come only in an All-Wheel-Drive variant. Airbags are 6; 4 at the front and 2 curtain airbags. In terms of length, this is actually shorter than my previous Optima K5 by 85mm but wider. Its big enough but not too much that it becomes a chore to drive and park.

The facelift done on the exterior in my opinion, is minor compared to the outgoing model but makes quite a significant amount of difference to way it now looks. It now looks quite upmarket.

The headlamps are now fully LED unit which comes with Dynamic Bending, a feature which swivels your headlamps according to the direction of the steering. It’s a good and useful feature but sometimes I think they overdid the calibration. It just swivels too enthusiastically  compared to other makes and even my old K5 which only lit a cornering bulb to corners but that sufficed, don’t have to be so dramatic. I am sure everyone is now acquainted with Kia’s ‘ice cube’ foglamps and on its iteration here, with that big ‘tiger nose’ grill, the front looks quite imposing. Most cars on the road will give you right of way when they see it barreling down their rearview mirror. 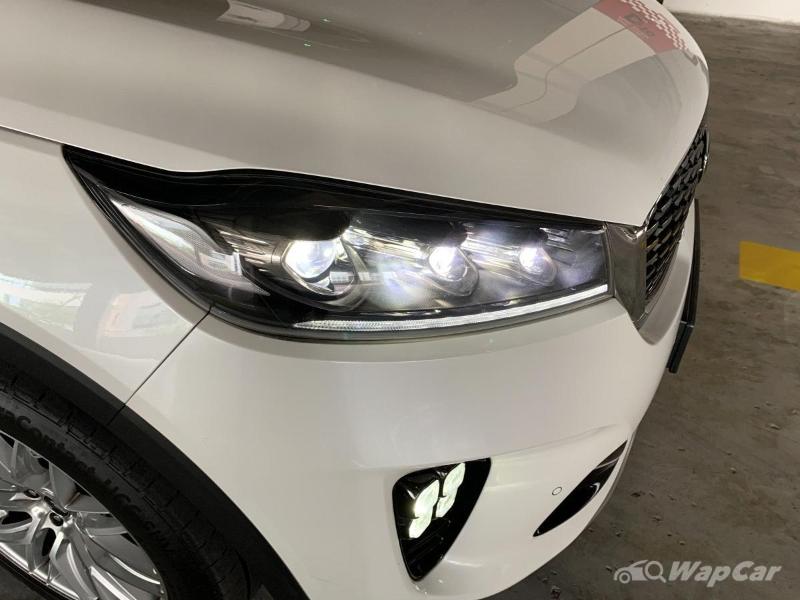 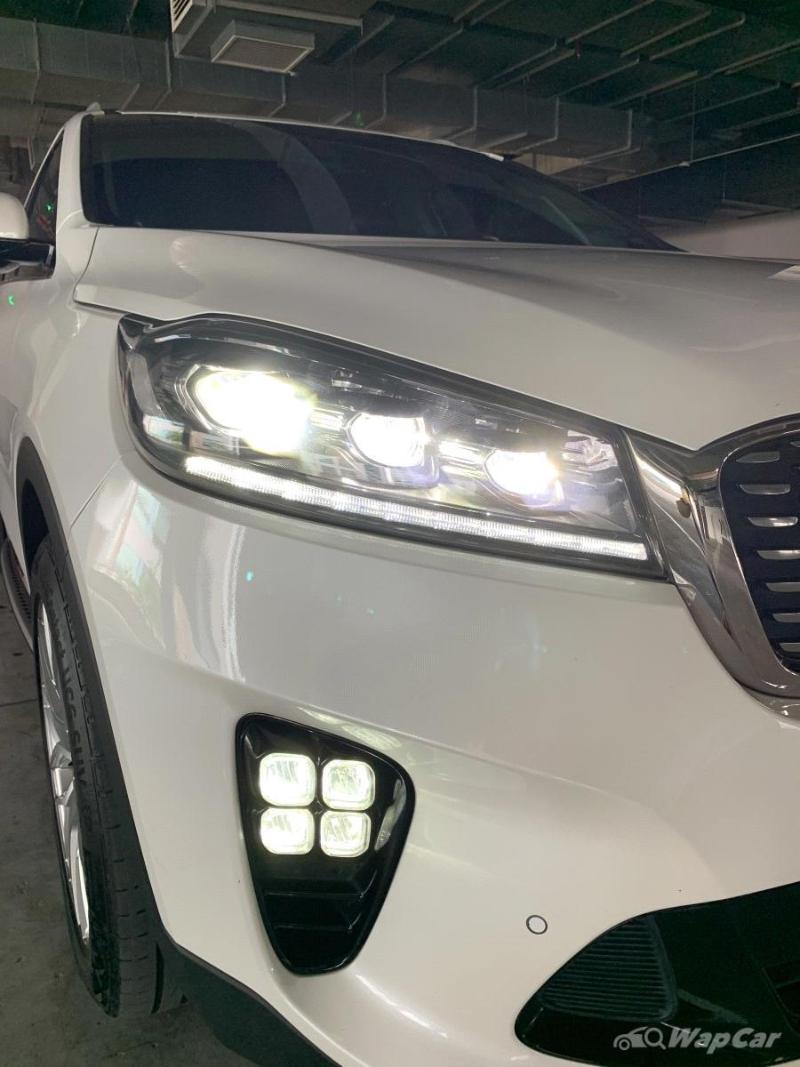 The side of the car is quite handsome but plain with fender guards and a simple flare ‘design line’ at the bottom of the doors to give it that understated muscular SUV look, the only part which I think hints an ounce of ‘sportiness’ is that slanting D-pillar window frame. The rear is very conventional and boring like a slab of butter.

The only thing that give it’s a bit of identify is the rear lamp clusters, now with new lightbar graphic and combination LEDS to bring its contemporariness closer to its Hyundai Sibling the Santa Fe which is the newer model. 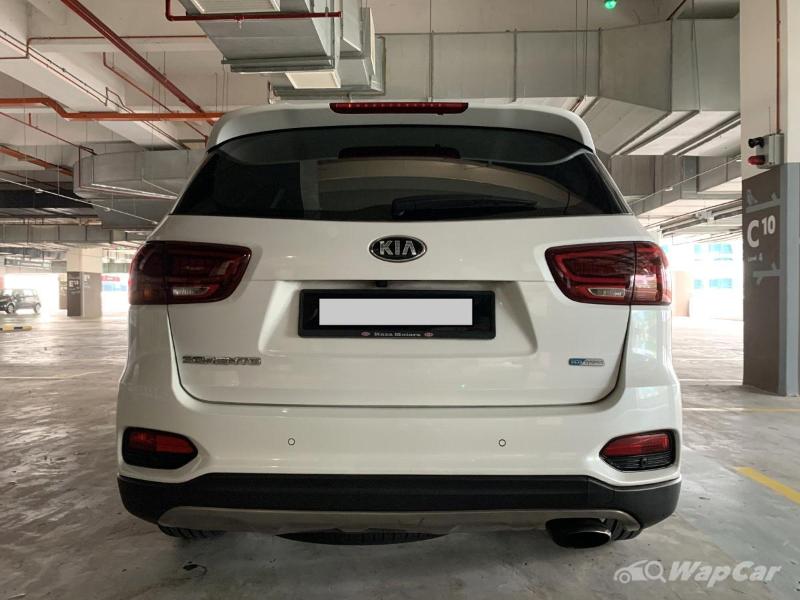 The interior is the part which i think they should have done more work on. The touch points are all soft touch, and everything feels well put together make no mistake about it. I brought my colleagues on car ride to lunches and they always commented, “Wah really your car has no squeak and rattles”, this was a from a guy driving a VW. It really feels like a premium car inside, my only gripe is the way the dashboard has been designed.

To me, it looks like a car from the previous generation or maybe 2, Its pleasant but plain boring. Features in the interior includes a center digital display with 2 analog dials. The center digital cluster can display the regular trip computer, distance-to-empty indicator, tire pressure monitoring system and a feature which shows how much power is being distributed to all 4 wheels. Most of the time only the front wheels are being powered, but when you floor the pedal or tackle a spirited corner when the road is wet, you can see how power is being distributed to all 4 wheels and it seems to know what it's doing. Its front 2 seat has heat warmers which I have no idea why they included seeing we live in a tropical country. It has 2 rows of aircon with another blower for the 3-row passenger which is a very good option whenever they are being used. 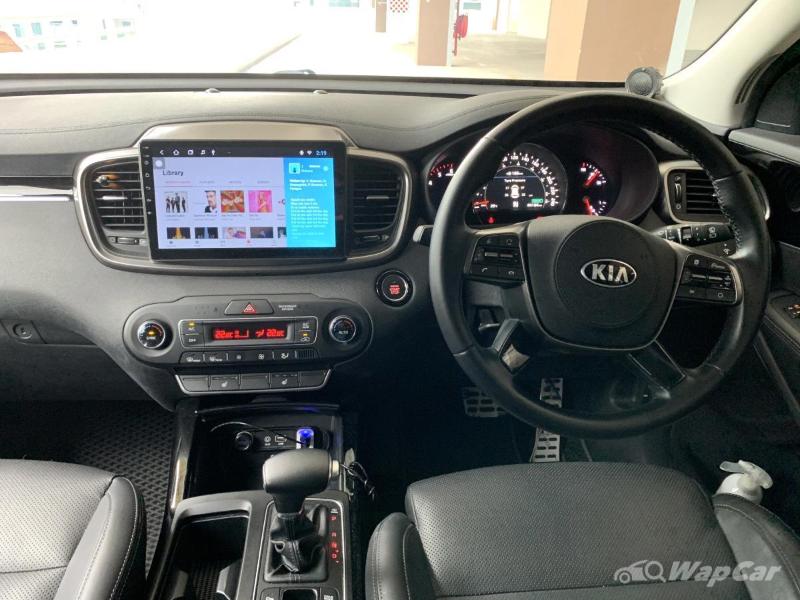 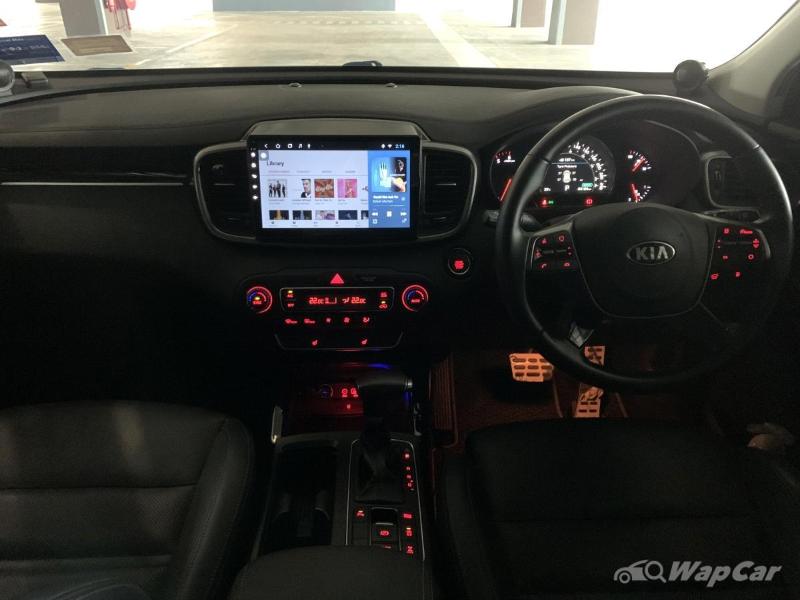 On the interior space, this is a 7-seater and I dare say the interior is massive. You can seat 7 people in comfort, yes even the last 2 benches provided you are an adult on average build. Kid have definitely no problems. The seats are very comfortable and middle row can be pushed back and recline to give it an almost limo like feel. I cycle on the weekends and with the middle row folded down, it can easily swallow an entire road bike with still a lot of room to spare. It really looks like you can fit a queen size bed inside. There are gloss panels insert on the door card to uplift the ambience abit but overall the interior looks dated but is very practical.

Driving it has been a very simple affair despite the cars’ size. Driving gives you the impression that you are driving something smaller. The electric power steering has decent amount of feedback when in motion but may not be as tight as say a BMW or Mazda, this is aftercall a near 2-ton car. It is quiet, well insulated and refined on the move and the driving the car feels quite close to driving a Lexus NX200t, no joke. It is that quiet on the move. 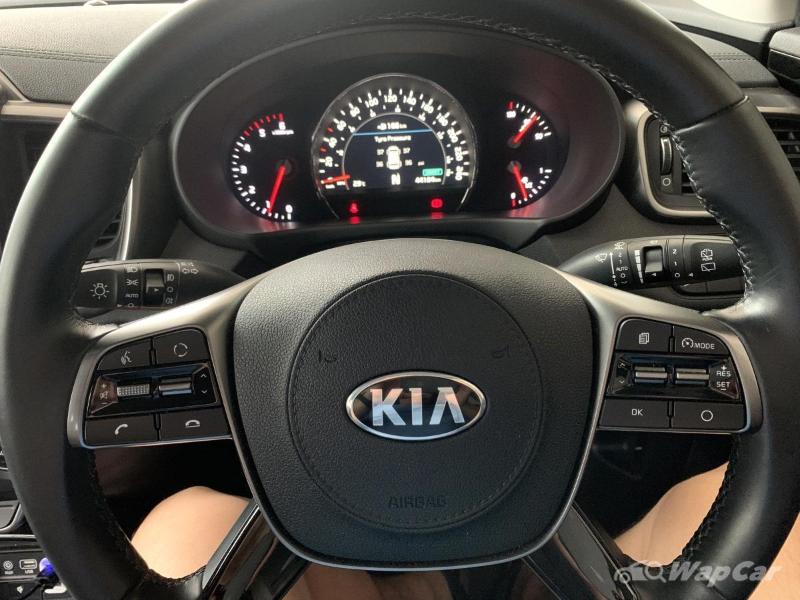 This is a very comfortable car to ride in, the car feels more European than Japanese, there is a bit of body roll, but it handles corner with aplomb for something this size. There are some minor tire squeaks when pushing at the edge, but nowhere do you feel it on the steering that you are losing grip like a car without AWD. On that front, I need to add that I have installed UR bars, soundproof and chassis foamed the car so this may have contributed to the improved noise insulation and handling. 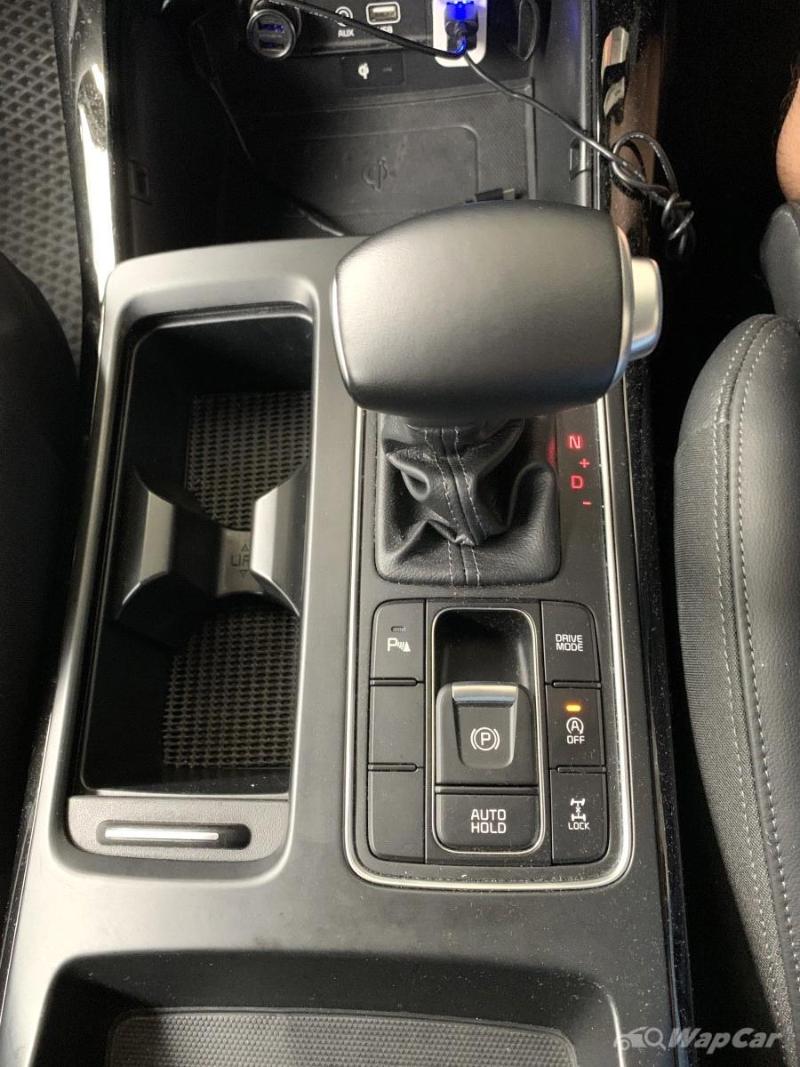 There are 3 driving mode presets available which ultimately only changes the steering wheel firmness and throttle mapping.  Eco, Comfort, Sport and ‘Smart’. Comfort would best suit everyday drivers where power delivery is smooth and pick up feels linear. Put it into ‘Smart’ mode and you can feel the preset changing on the fly. Acceleration is more instantaneous compared to Comfort mode and the car would toggle between the 3 preset settings based on your driving habit at that point of time.

There have been times when I felt sudden jerks when the system switches among the three presets but this is rare and far in-between. This is perhaps the only gripe I have with this Smart system but overall is not a deal breaker.

The 2.2 diesel engine comes from Hyundai-Kias ‘R’ line of modern oil burners. It took me a while to get accustomed to the clatter of diesel engine so much so during the first week of ownership, when I stopped at red lights. I kept wondering to myself if I was driving a Hilux. Moving off the line also sounded a bit agricultural but once you pass 50 KM/H, there is no more clatter, it just sounds like a regular 4-pot engine; a refined 4-pot engine that is. This engine spots 197PS and 442NM of torque and boy does it gets off the line quick. Depending on when you floor the pedal, there is a hint of turbo lag but once the turbo spools and the torque kicks in, it just pulls and pulls albeit in a linear short of fashion.

Going up Genting was a revelation as before diesel, I was more accustomed to higher revs when climbing using petrol engines, for this diesel unit, as the turbo spools at just 1750rpm, there is near instantaneous acceleration up the hills whether with passengers or not, that is the beauty of diesel power. it felt so relaxed  with no loud engine whine which is total departure from experiences of the past. For a car this size, the power is very useable which makes it easy to drive in the city or on the highway. It is also surprisingly nimble.

Being diesel, you may think that I save a lot on petrol, in my opinion, not quite. You pay as you use in a sense that if you drive sedately on a long journeys (no longer happening) you can average 6.x - 7.XKM/L but drive in the city hastily, it will return in the region of 11.2KM/L. Fuel tank capacity is 71L and only Euro5 is to be fed so no, not exactly fuel saving, but with the torque,

With regards to maintenance I am spending less than my previous as the car came with 2 years free maintenance. Things i have replaced is the AGM battery when it went flat last month which costs RM1400. The original battery only lasted less than 1 ½ year but noticed it was European branded so maybe it couldn’t withstand our year-round warm climate. All 4 brakes pads have also been changed in less than 1 ½ years so I am not sure if it's my driving or the pads just wear quickly trying to slow down something near 2-ton. Pads are about 500 a pair at the Service Centers.

Overall, I am still enjoying my ride and it has aged well. There still no squeaks or rattle and everything still feels solid. Its practical yet quick enough when you want to have some fun. I don’t think Naza Kia is selling any more of these and don’t think the 2021 model will make landfall anytime soon and even so, the price; which makes this a very worthy left field offering on our roads. In this respect, I don’t really like to follow the Joneses.