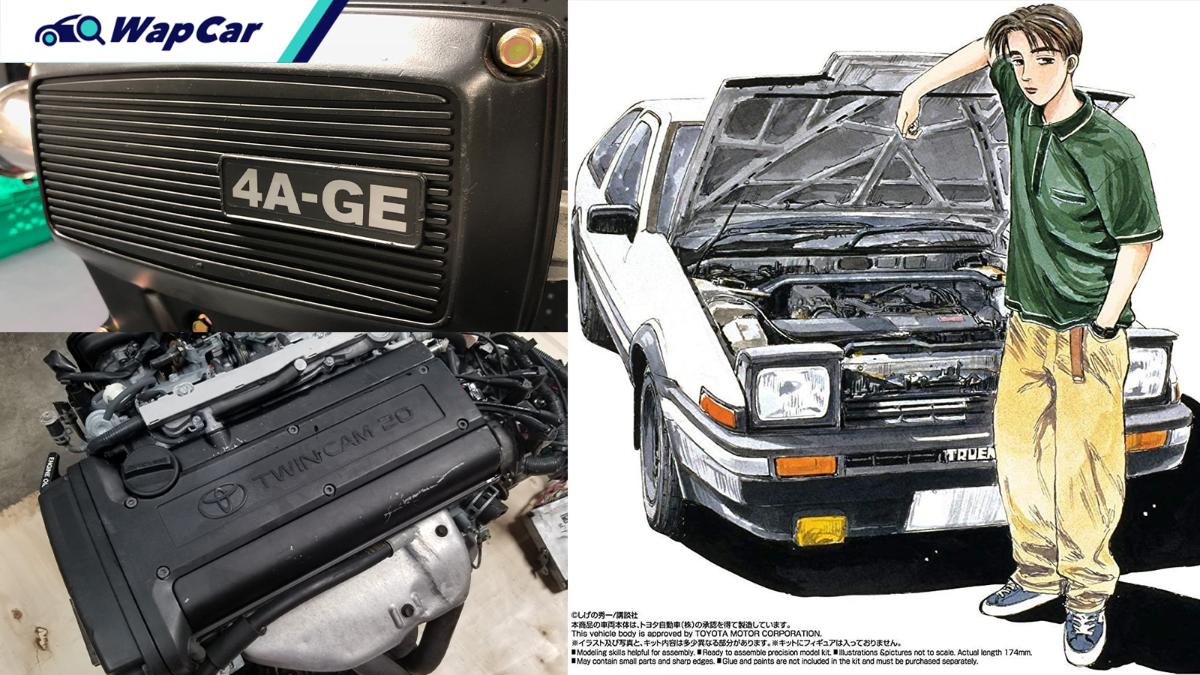 If you, like me, spent your teenage years watching the Initial D anime, you'd be familiar with that throaty, zingy and glorious howl of the Toyota AE86 Trueno belonging to Takumi Fujiwara. Well, that howl, is real, and it comes from Toyota's legendary 4A-GE series of engines. Have a listen below.

Wonderful, isn't it? It was everything we loved from performance engines from that era: high revving, scalpel sharp responses, and naturally aspirated. Sure, the 4A-GE didn't make 500 PS like its other contemporaries, but it had more than enough poke for a fun, lightweight package like the Toyota AE86.

So, today we want to appreciate what a fine engine the Toyota 4A-GE really is. By extension, we tell you why we rate the 4A-GE so highly, and what makes it so special.

The 4A-GE is a family of engines that has 1.6 litres of displacement, 4 cylinders, and is naturally aspirated (there is a supercharged variant, called the 4A-GZE, but let's focus on the 4A-GE here). The nomenclature for the engine code follows this logic:

Which is why Toyota asked Yamaha, experts in motorcycles to help design the cylinder head of the 4A-GE. The result? A little 1.6-litre engine that revved so sweetly, you'd just wanna wring its neck all day long.

Besides motorcycle engines, only Formula One race engines had a 4 valve per cylinder configuration. Formula One engines at the time derived power from high engine speeds, and this thinking went into developing the 4A-GE (higher engine speeds = better horsepower figures). In essence, the 4A-GE was a slice of Formula One technology, for the masses.

More than just a motorsports connection, the 4A-GE was immensely popular in actual motorsports. It was so durable, versatile and easy to maintain that you can use it for track, drift or gymkhana (as I had) purposes.

Generations of 4A-GE - The 16-valve pioneers

The first three generations of the 4A-GE utilised a 16-valve cylinder head. The first of the three is called the Blue Top (Early Bigport). This came out in 1983 as a replacement for Toyota's 2T-G engines. It was recognisable from the silver cam cover with black and blue letterings, plus three reinforcement ribs on the back of the engine block.

In the Japanese versions, where a manifold absolute pressure (MAP) sensor is used instead, output was 120 PS and 142 Nm, paltry by today's standards. But, the 120 PS was made at 6,000 rpm, which tells you about the rev-happy nature of this engine and powered the AE86 that weighed no more than a tonne. Furthermore, it is 15% lighter than its predecessor, the 2T-GEU.

In American versions, this engine had a more restrictive vane-type air flow meter (AFM) to meet emissions regulations there. Consequently, output was slightly lower at 114 PS and 131 Nm

The 'bigport' nickname came from the large cross-section area in the intake ports. This meant good airflow at high engine speeds, but low-rev lethergy. To counter this, Toyota Variable Induction System, (T-VIS) was introduced to optimise air flow at low engine speeds. The Blue Top ended production in 1987.

The second-generation Red & Black Top (Late Bigport) took over and brought larger diameter bearings for the connecting rods. The updated engine is also stronger thanks to seven reinforcement ribs on the back of the engine block, up from three.

T-VIS and AFM/MAP (market dependent) stayed on, but this second generation was only produced unitl 1988. Output remained largely the same as the earlier Blue Top.

Then came the final iteration of the 16-valve 4A-GE, the Red Top (Smallport). Compression ratio for this engine was raised from 9.4: 1 to 10.3: 1. The 'smallport' name? Well, the intake ports were redesigned to a smaller cross-section, thus negating the need for T-VIS.

Improvements to the engine design saw US (AFM) versions put out 125 PS and 149 Nm, with Japanese versions (MAP sensor) making 10 PS more. The Red Top was produced up until 1992, when a whole new cylinder head was introduced.

Generations of 4A-GE - The 20-valve screamers

The fourth-generation 4A-GE (1991 to 1995), is also the first-generation of the 20-valve ones (confused yet?). The Silver Top was named as such because.... well it had a silver cam cover with chrome letterings (thanks Sherlock). It brought even more improvements to eke out even more performance.

5 valves per cylinder, variable valve timing (intake side), higher compression ratio (10.5:1). Best of all, it ditched the old intake manifold and replaced it with individual throttle bodies. The result? Supreme throttle response and driveablity, in a package that still loved to rev.

157 PS now came at a heady 7,400 rpm, along with 162 Nm at 5,200 rpm. Curiously, the Silver Top retained the vane-type AFM system employed previously in American-market 16-valve 4A-GEs. This necessitated a plenum, with intake ports that are far more upright than the curved ones in the 16-valve units.

And onto the crown jewel of the 4A-GE family (1995 to 2000), the final iteration of the lineage and also the most magnificent one, the Black Top 20-valve. Once again, the name is pretty self-explanatory (black cam cover, black letters, carry on Holmes).

Using the Silver Top as a base, the Black Top added on even higher compresssion (11:1), larger diameter individual throttle bodies (43 to 45mm), hotter camshafts, plus lighter flywheel and conrods. All these helped the Black Top punch out 162 PS at 7,800 rpm, together with 162 Nm of torque at 5,600 rpm. Rev happy? You bet.

If you couldn't tell, I am a big fan of the 4A-GE engine family. It is a testament to Toyota's engineering integrity that you can still see these engines running around, participating in various motorsports events. Celebrate them while you still can.

To this day, you can find aftermarket support for the 4A-GE, and it remains a favourite with enthusiasts because it is not just characterful, but reliable, easy to maintain and delivers so much performance for its engine size. If you want an engine to start off in motorsports, you could do worse than the 4A-GE.

How do I know that? I started competing in gymkhanas back then using a 4A-GE Black Top. In four years of competing and hard driving, it never skipped a beat. Oil changes and off it went again.There won't be another one like it. As such, the Toyota 4A-GE engine will always have a special place in my heart.