Home > News > What makes BMT 216A the essential Bond car and what happened to it?

What makes BMT 216A the essential Bond car and what happened to it? 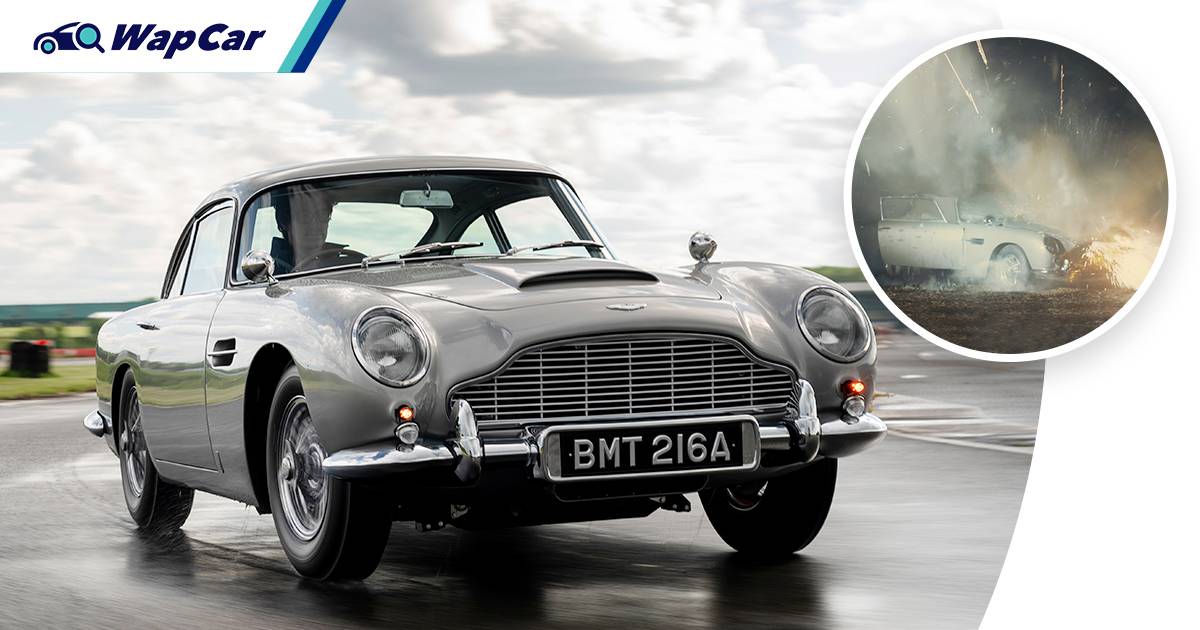 For over 50 years, moviegoers and action film fans alike have seen MI6’s Agent 007 aka James Bond fight baddies and swoon ladies with his debonair attitude.

To some of us though, Bond was the gentleman spy with an array of awesome rides and none shook our hearts up (not stirred) quite like the Aston Martin DB5. Specifically, the Silver Birch DB5 that wore the number plate BMT 216A

Though the silver British sports car made its Bond film debut in 1964’s Goldfinger with Sean Connery as (the best and quintessential) 007, it would appear in 7 other films including the latest one, No Time to Die. 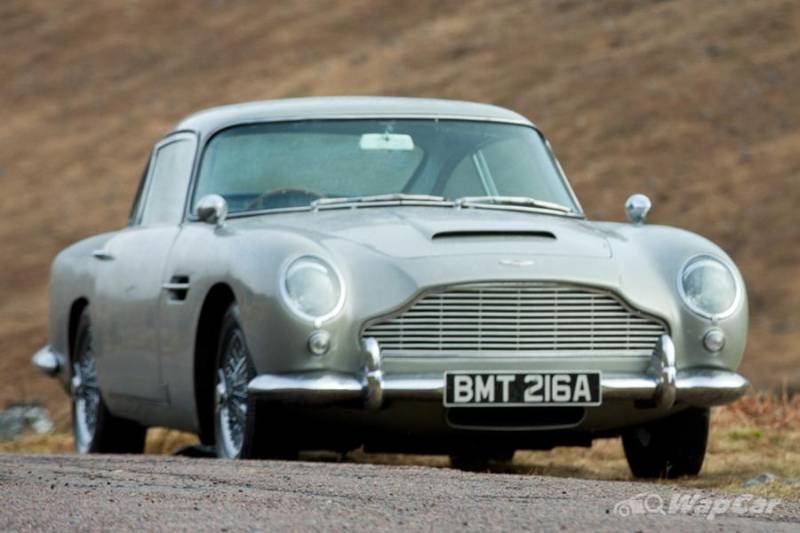 However, the actual car from the film, the DB5 prototype (chassis no. DP/216/1) with BMT 216A as its registration number, had in reality been stolen and its current whereabouts remain a mystery. So how did the world’s most recognisable film car ended up being a star of its own real-life heist drama?

In most of Ian Fleming’s James Bond novel series, the gentleman secret agent was portrayed driving a Bentley 4½ Litre. It wasn’t until the seventh book, Goldfinger, did Fleming envisioned 007 to be driving an Aston Martin - a DB Mark III that was issued by MI6. 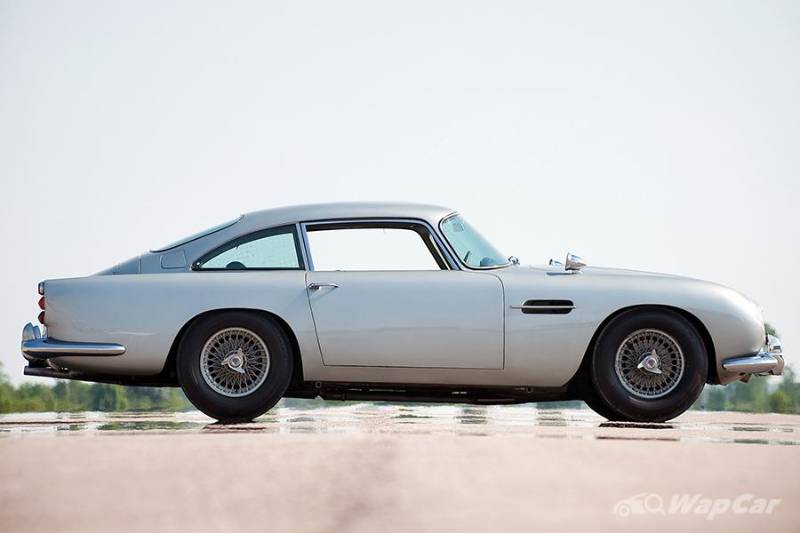 So, special effects expert, John Stears had to persuade Aston Martin to provide the prototype for the movie. Yet, this wouldn’t be the first time the prototype DB5 would be making its on-screen debut.

The prototype was originally painted in Dubonnet Red and appeared in an episode of The Saint with future Bond, Roger Moore in 1964.

Aston Martin allowed Eon Productions to modify the DB5 and have it repainted. Stears then got to work fitting the now recognisable gadgets onto the DB5 prototype like revolving number plates, homing devices, machine guns, bulletproof windscreens, tyre shredders, and a passenger ejector seat.

Also read: If James Bond traded his Aston Martin for a Lexus in 2030, this is what it looks like

BMT 216A would eventually make a brief return in the sequel, Thunderball and the DB5 would later make an appearance in 1995’s Goldeneye. However, this particular DB5 sported a different number plate – BMT 214A and this got fans buzzing about what happened to the previous DB5 in Bond’s universe.

A return to the past

Fans would get their answer 17 years later in the movie, Skyfall. Here we get to see the familiar Silver Birch DB5 equipped with its iconic BMT 216A license plate and some of the original gadgets. Unfortunately, it got destroyed in the end but it was seemingly undergoing restoration in its sequel, Spectre. 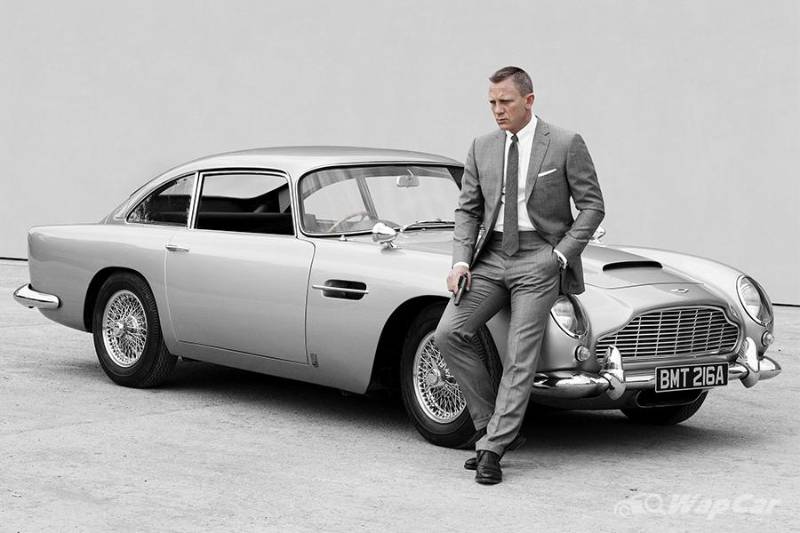 In the trailers for No Time to Die, fans see the return of the Bond’s iconic DB5. This time, it has gained a few updates including miniguns that are placed behind the headlights and an LED number plate that acts as a modern homage to the original revolving plate from Goldfinger.

Behind the scenes though, BMT 216A was in reality, one of a couple of DB5s that were used in the films. The loaned prototype was commonly referred to as the "road car" as it was used in the chase scenes while a second car (chassis no. DB5/1486/R) was called the "gadget car" for the close-up shots. 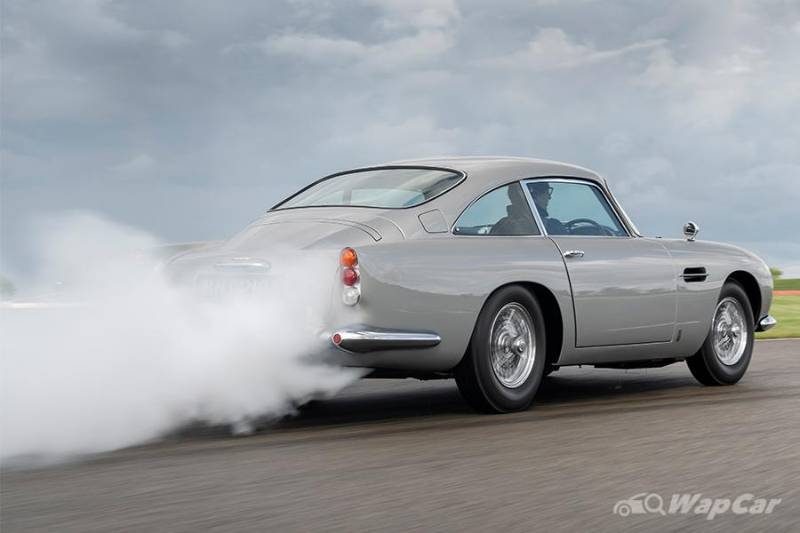 Goldfinger became a huge success for Eon Productions and the film became a great advertisement for Aston Martin. Since then, the British carmaker has become synonymous with James Bond even though he has been featured on film with some equally irresistible wheels.

Also read: Top 5 Bond Cars that are not the Aston Martin DB5 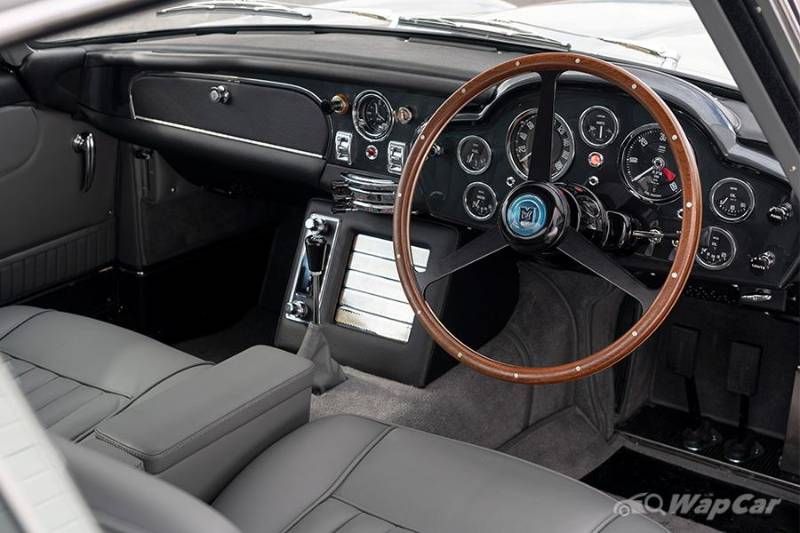 Aston Martin would produce 1,059 units of the DB5 from 1963 to 1965 and another 25 more units in 2020 as part of a promotional campaign with Eon Productions. The DB5 has become one of the most valuable cars on the planet with one of the cars used to promote Goldfinger sold at an auction for USD 6.4 million (RM 26.8 million) in 2019.

However, the original DB5 that was used in the film has inexplicably vanished without a trace. 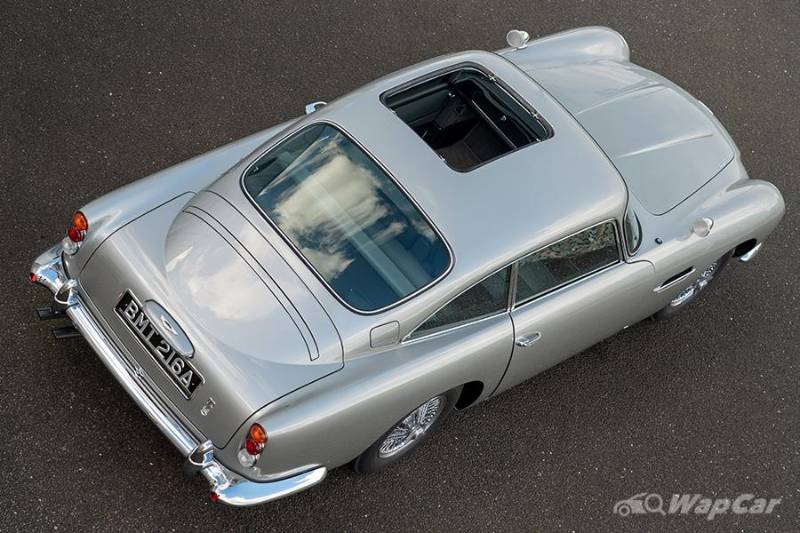 In the years following the end of the production of Thunderball, BMT 216A was given back to Aston Martin which had the gadgets stripped away and sold to Gavin Keyzar, a company director from Kent, England. Keyzar would install some replica gadgets in the car before selling it off into the hands of Richard Losee.

Losee, a developer that was based in Utah, loaned his DB5 for use in the 1981 film, The Cannonball Run which starred Jackie Chan. Losee would sell the car at a Sotheby’s auction in 1986 where it was won by Anthony Pugliese III for a cool USD 275,000 (RM 1.2 million).

Also read: Jackie Chan once redesigned a Mitsubishi Lancer Evo, how did this weird partnership begin?

Pugliese III was a real estate developer and an avid car collector. On the night of June 1997, a group of thieves broke into a private jet hangar belonging to Pugliese III at Boca Raton Airport in Florida and stole BMT 216A. He was investigated at the time but was never charged. 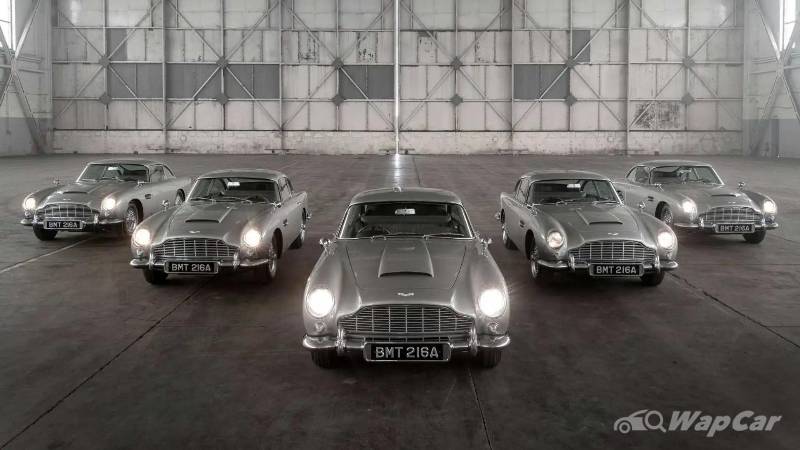 The thieves who broke into the hanger left little to no trace of the DB5’s disappearance. The alarm wires were cut which gave the criminals plenty of time to drag the Bondmobile out into a supposed awaiting light cargo plane. 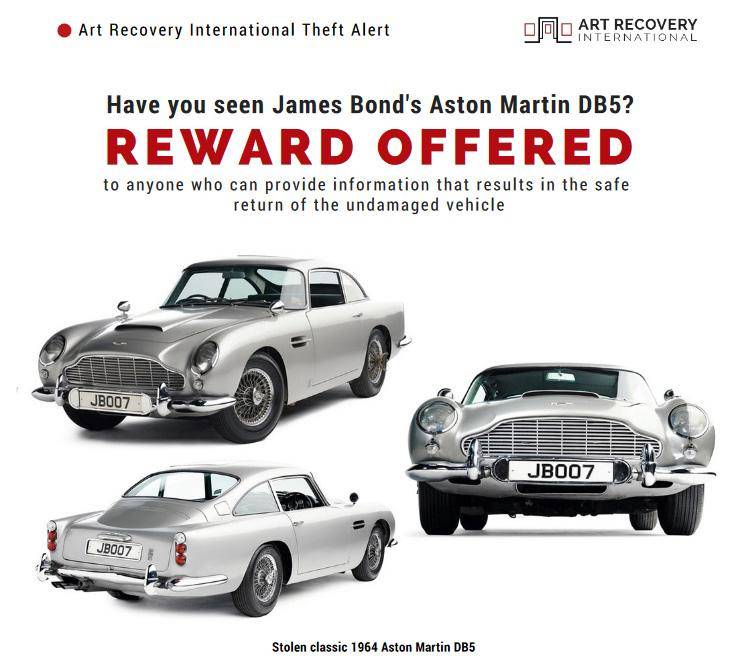 The iconic car is now estimated to be worth more than USD 24 million (~RM 100 million) and there is a six-figure reward for any information regarding the lost piece of Hollywood and automotive memorabilia. Some suspect the car to be destroyed and is somewhere on the ocean floor while others believed the car to be in the hands of a wealthy collector in the Middle East who simply didn’t know the car was stolen. 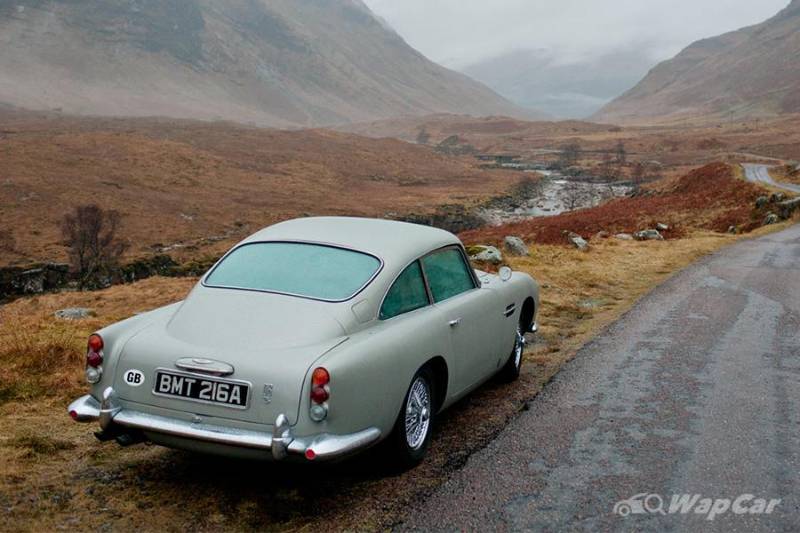 Regardless of the true outcome of the original BMT 216A, it remains a cinema icon and completely changed the view of how vehicles are portrayed in films and television.