HomeNewsReview: W213 Mercedes-AMG E63S 4Matic+ - M5 too boring? This is the answer 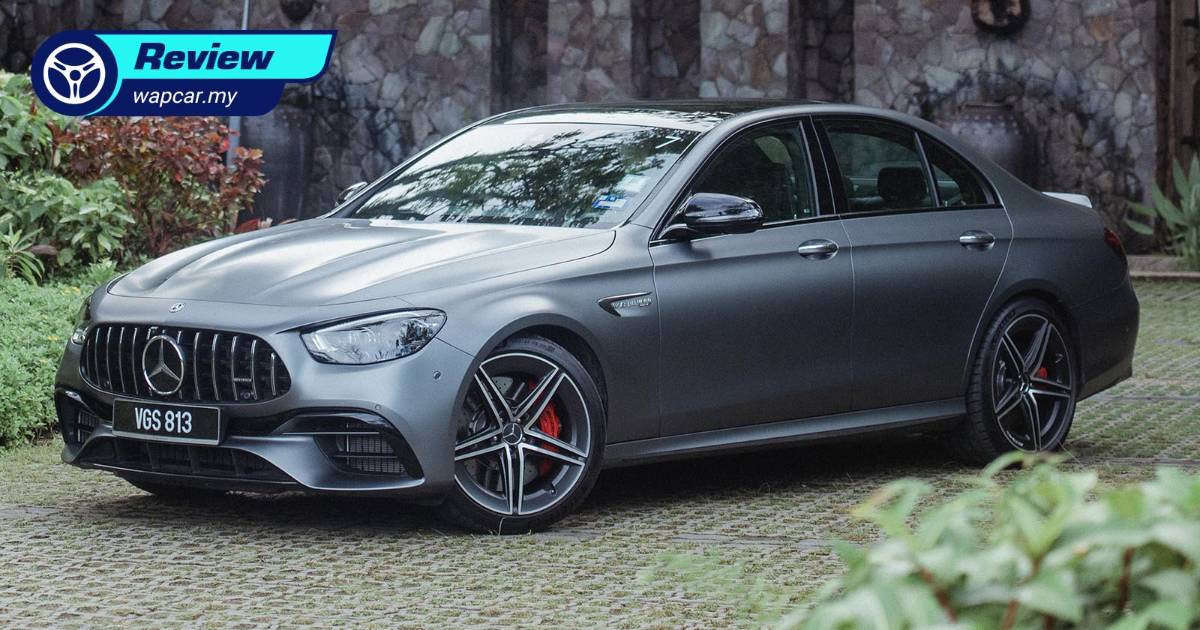 "Would you like to have the Mercedes-AMG E63S 4Matic+ for a few days?", was the million-dollar (RM 1.12 million, to be exact) question posed to us by Mercedes-Benz Malaysia (MBM). There was always only going to be one answer to this question, wasn't it?

I mean, who would say no to having some seat time in one of the best performance sedans in the world, one that has 612 PS and 850 Nm lurking under the hood? Is this the F90 BMW M5 slayer that we've been promised? 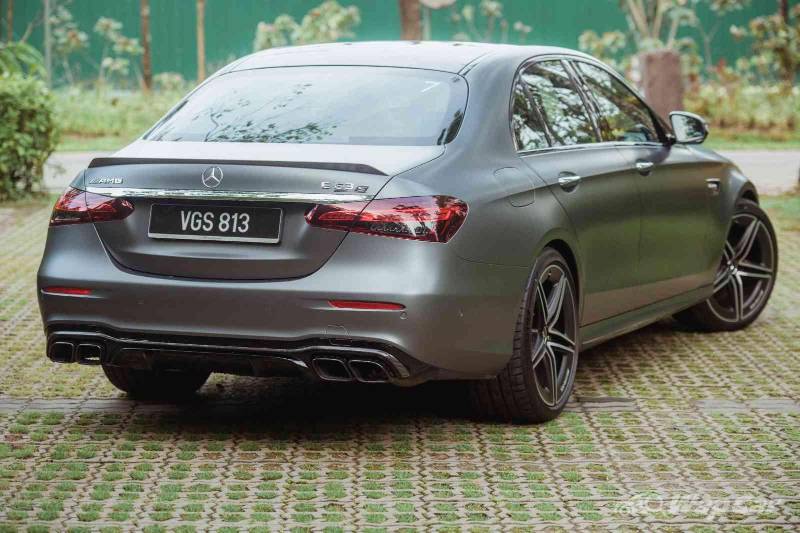 Well, if you were just to look at it from the outside, you'd imagine this to be a Papa's regular Mercedes-Benz E-Class, with subtle hints in and around the exterior, like the 'V8 Bi-Turbo' emblem on the fenders, the quad exhaust pipes.... which are fake, and the massive 20-inch wheels with equally massive brakes. It's subtle, but menacing, topped of with the signature 'Panamericana' vertical grille. A sleeper car done right, especially in this Designo Selenite grey Magno paintjob.

An AMG performance model is never about weight reduction, but merely adding more firepower to overcome its heft. As such, the E63S' cabin is just as luxurious as a regular E-Class, and then some. The yellow stitching, combined with swathes of Nappa leather and suede just hits home brilliantly, melding luxury and sportiness in one place.

The rest of the cabin is everything we love about the W213 E-Class - facelift or not -, with AMG enhancements. The Recaro semi-bucket seats don't just look good, they really hold you in place during spirited driving. On the steering wheel, there are Porsche-style dials on the lower section to change driving modes, uncork your exhaust (who needs neighbours?), and lock in manual mode.

Mercedes interiors are always a treat, and the AMG E63S is up there with the very best the marque has to offer. Bad news is, things we disliked about the regular W213 E-Class are also present here. Offset driving position, a foot rest that isn't a foot rest, plus the infotainment foibles that we have outlined here.

There is no drama, you plant your foot down, and this thing just squats and takes off like a scalded cat. No wheelspin, just an insane slug of forward motion. How long can you put your foot down? Well, you'd probably hold on for five seconds before you either chicken out from looking at the speedometer (I did), or you encounter traffic.

Is it fast? It's bloody, flipping fast, unsociably so, especially in the more aggresive driving modes. The power delivery is brutish, and the exhaust amplifies the ferocity with plenty of barks and crackles on the overrun. What a show-off, but an experience you'd expect to have driving an AMG thoroughbred, not to mention a surefire and express manner to lose your license. 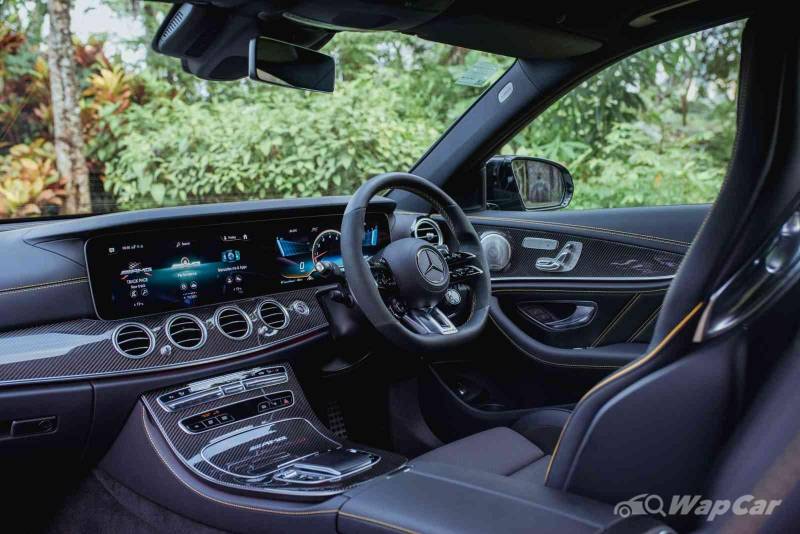 But calling it just a straight line machine is doing it a disservice. No, it's not a chassis bristling with feedback nor the most engaging (it weighs close to two tonnes). What the E63S has in abundance, is grip. Why wouldn't it, with 4Matic+ all-wheel drive and tyres wider than my face?

On the big, sweeping stretches of Karak Highway, the E63S felt most at home. Point and shoot, the E63S will faithfully and tenaciously stick to the intended line, with a slight hint of understeer. For a car its size, the adaptive suspension does a marvellous job to keep things tight.

Truth is, nobody needs this kind of horsepower in their lives. The horsepower wars has probably got to the point now where it's all about who has the biggest schlong gun in their closet. Not to mention, the E63S goes through fuel like it's running out of fashion. Our best efforts yielded a 14-litre/100km return, enough to trigger tree-huggers to go picketing.

Those that can afford one won't blink at the fuel consumption, but the AMG E63S does the rest of the performance sedan shebang with aplomb. When you're done using all 612 PS, flip it to Comfort mode and potter around like a regular E-Class. It's still comfortable, it's still refined, but it still drinks fuel at an alarming rate, despite cylinder deactivation. 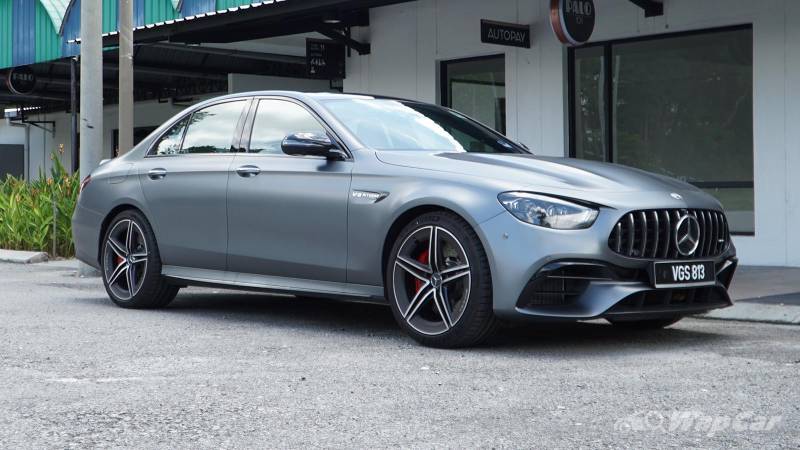 So, were we reluctant to hand the AMG E63S back to MBM after a hell-raising few days with it? Well, yes (my credit card bills won't agree of course), because a performance sedan of this ilk won't be around for much longer. You know, the kind that has a big, strapping twin-turbo V8 in the engine room. 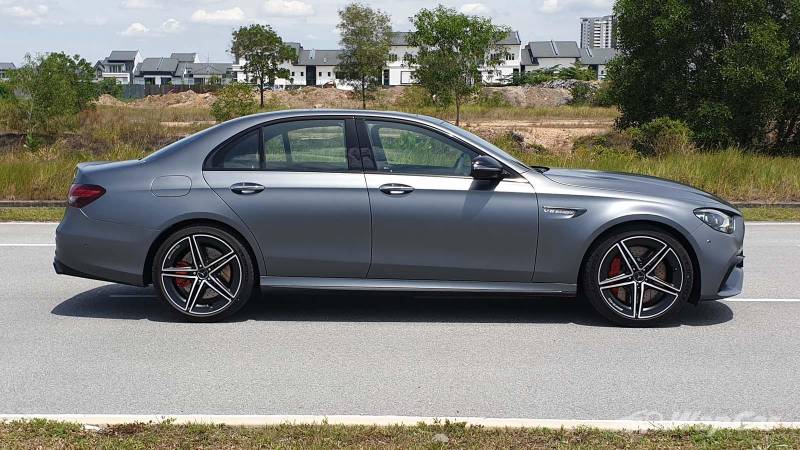 Already Mercedes-AMG has announced that its next-generation powertrains will feature some form of hybrid technology, so this W213 AMG E63S does feel a bit like a 'last of the pure thoroughbreds' -kind of machine. 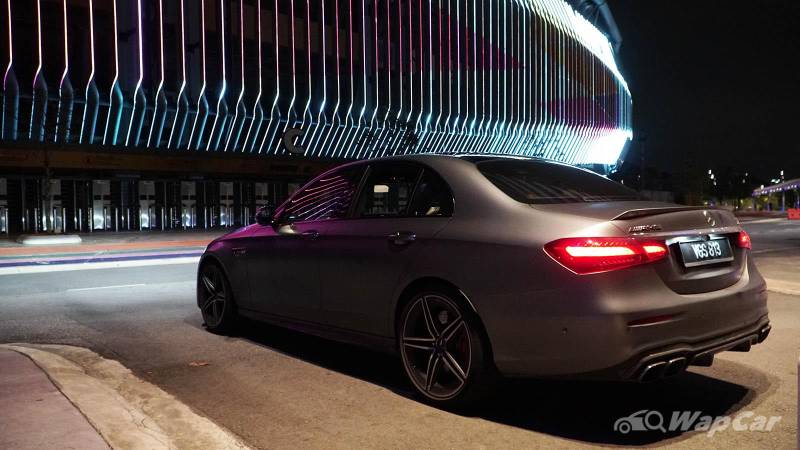 We don't doubt that the new powertrain will be faster still, but it will have lost some of that hairy-chested exuberance that defines AMG cars. Greta Thunberg won't agree, but the world is a better place because the Mercedes-AMG E63S exists. Shame it won't get an invite to a tree-hugger conference.