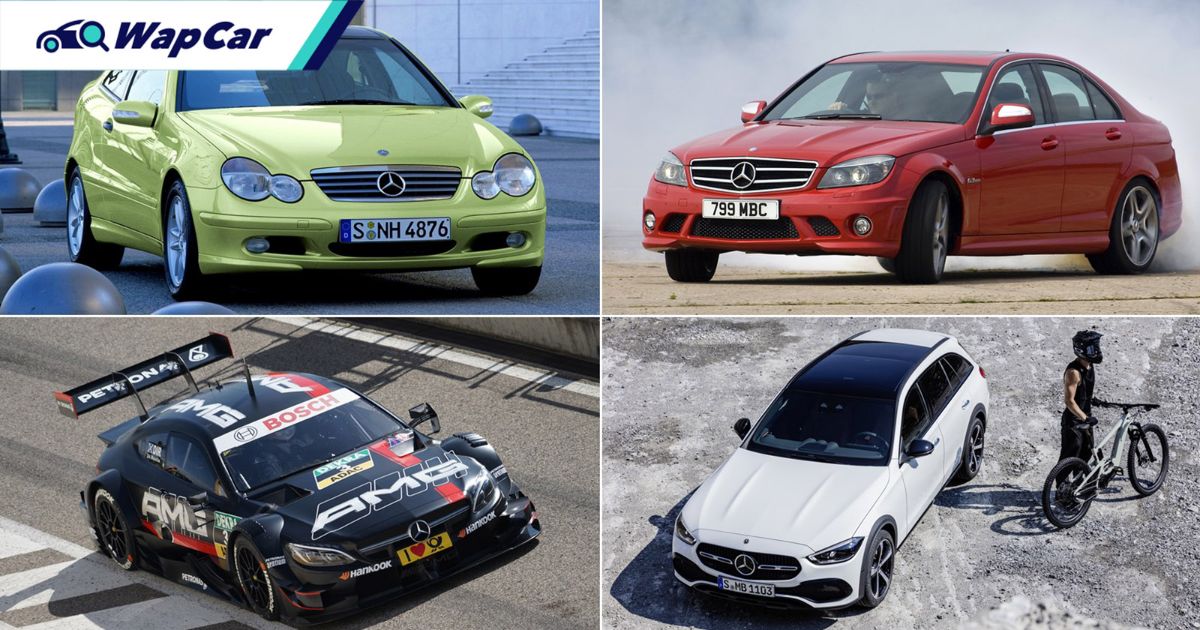 The Mercedes-Benz C-Class is one of the most popular Mercedes-Benz models in the world, though its popularity is waning in light of the rise of its SUV brethren. For nearly 30 years (40 if you want to include the original baby Benz, the W201), the C-Class has been the “compakt” class of the three-pointed star. 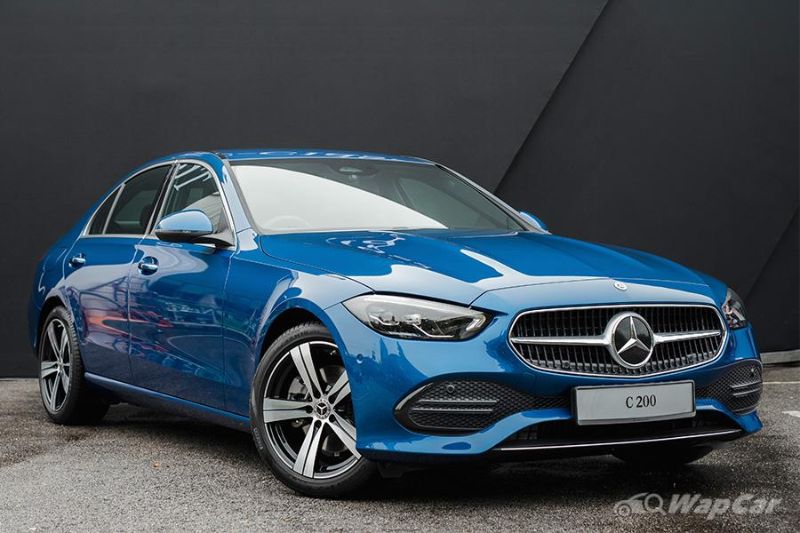 Though the role of an entry-level Mercedes-Benz has since been taken over by the A-Class, the C-Class is still seen by many fans as one of the proper Benzes that exude elegance when you glance at it. Still, the C-Class is so much more than just a mini S-Class based on looks and more recently, tech.

So, we’ll take a look back at all 5 generations of the C-Class but instead of a history lesson, we’ll be showing some interesting things that you might not know about the baby S-Class. We’ll start off with the 190E and though it was replaced by the C-Class, we can’t help but put this interesting fact in.

1. The original Baby Benz had an unofficial hatchback 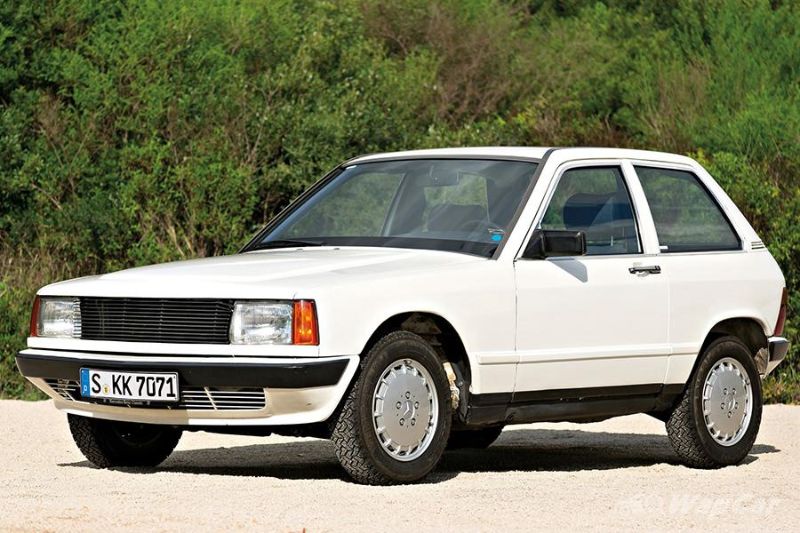 Though the A-Class is Mercedes’ first production hatchback, it isn’t the German luxury brand’s first attempt. That belonged to the 190E Compact Car “Stadtwagen” which was seen tested prior to the W201’s eventual debut in 1982.

The “Stadtwagen” (City car in German) was once speculated to be Mercedes-Benz's newest model but it never went beyond the prototype stage. The lil' Merc featured some design elements that would be seen on the production W201 but its shortened design and chopped-up rear looked quite lopsided. 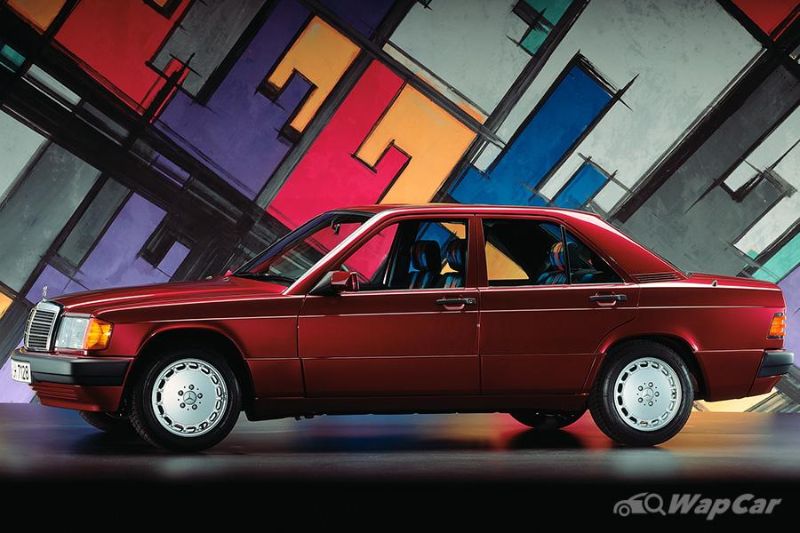 As a result, Mercedes-Benz wisely decided to only offer the W201 as a sedan which turned out to be a major success with nearly 2 million cars sold. However, that didn’t stop one tuning company from building the first Mercedes hot hatch.

Schulz Tuning was a conversion specialist that mostly dealt with Mercedes-Benz models, converting G-Wagens and the W124 E-Class as Pullman limousines. But with the W201, the company offered two unique conversions which are a coupe and a hatchback.

Even though the W201 Coupe looked like a great rival against the E30 3 Series coupe at the time, it’s the W201 Hatchback that gets the limelight here. Called the 190E City/Compakt, the bootyless W201 was powered by a 2.6-litre inline-6 that made 166 PS, making it one of the fastest hot hatches at the time. 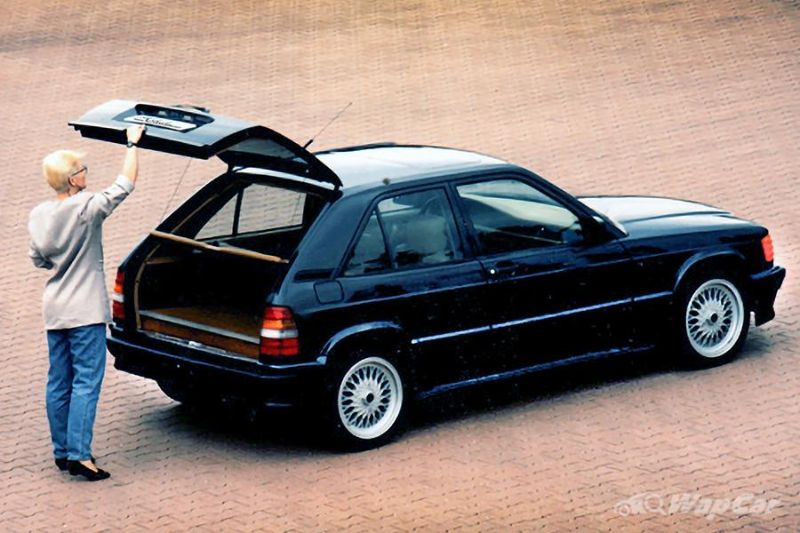 Unfortunately, Mercedes-Benz deemed the conversion to be illegal, too perfect even, that it prohibited Schulz from using the three-pointed star anywhere on the hot hatch. Worse, it is so rare that Schulz only managed to build at least 4 units thanks to the expensive cost – the W201 City was a result of combining the front of a W201 with the rear of an S124 station wagon.

2. The designer of the first C-Class (W202) also designed the Mitsubishi i

Though the C-Class would be acknowledged as the mini S-Class beginning from the W205, that connotation actually began on the very first C-Class. The W202 was designed by Olivier Boulay who was also responsible for the W140 S-Class.

Shortly after, he worked for Subaru where he designed the Subaru Legacy before returning to Daimler. When the German carmaker merged with its American counterpart, Chrysler to form DaimlerChrysler, it also took control of Mitsubishi Motors. 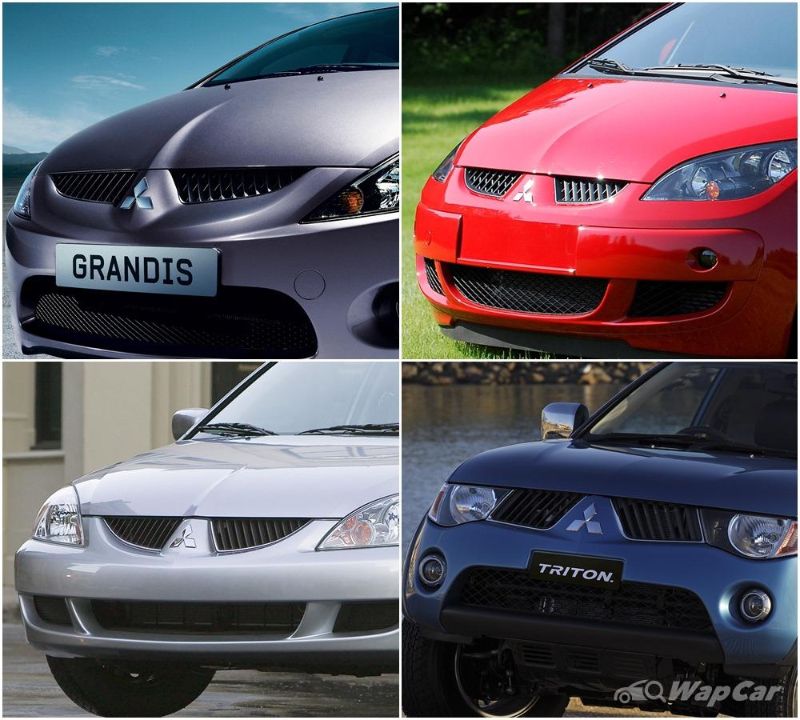 Boulay would then be appointed the head of Mitsubishi’s design office but financial troubles at the Three Diamonds would see him around the company for only 3 years. However, he would help shape Mitsubishi’s design language for the 2000s with the brand’s infamous triangle front grille design. 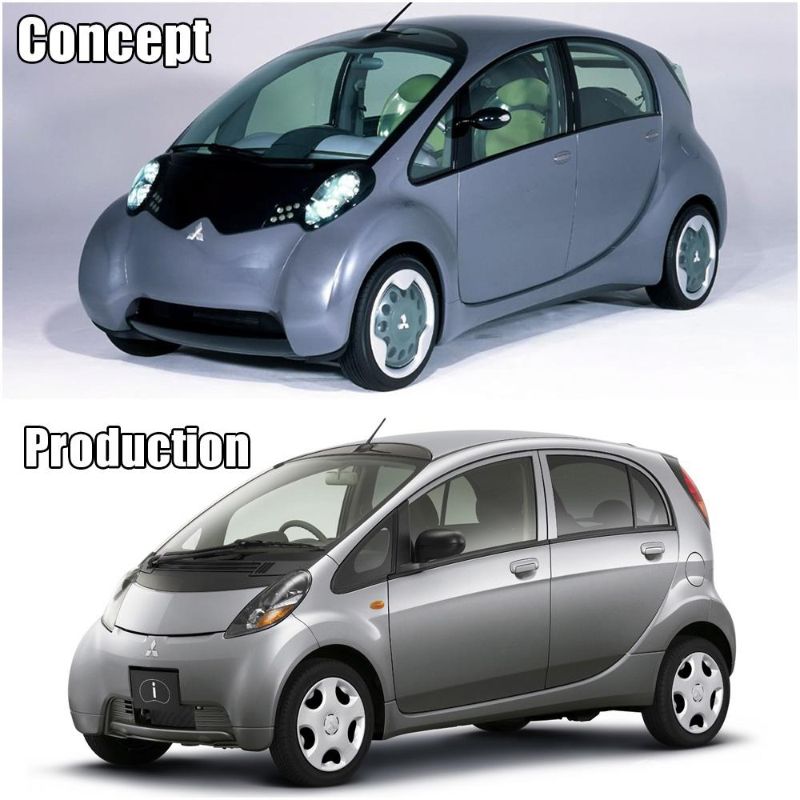 Besides introducing Mitsubishi’s curvy front, Boulay would also pen the egg-shaped Mitsubishi i. Initially introduced as a concept in 2003, the production eggmobile would sport a smoother and iconic design. It would be one of Boulay’s final designs for the three diamonds, released years after he returned to Daimler. 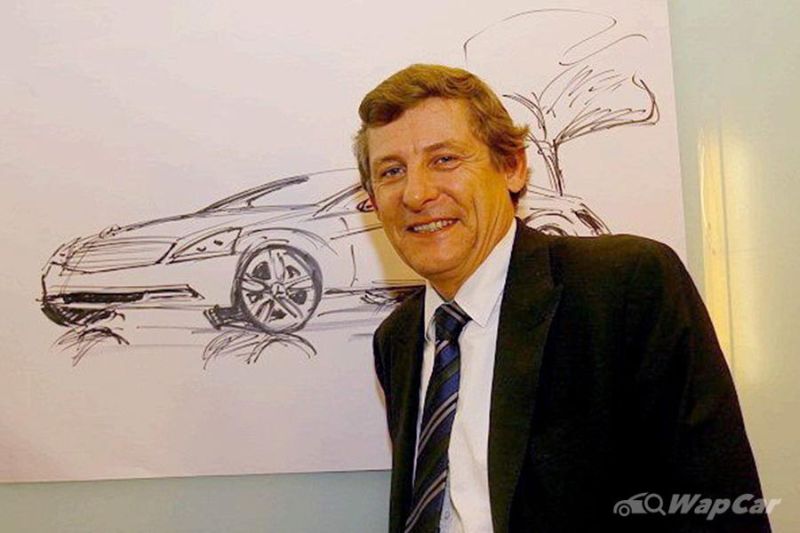 Since 2017, Boulay has left Daimler and is working for his own design and architecture consulting company in Portugal, Boulay & Pinatel Lda.

3. The W203 SportCoupe was carried over into the next generation as the CLC-Class 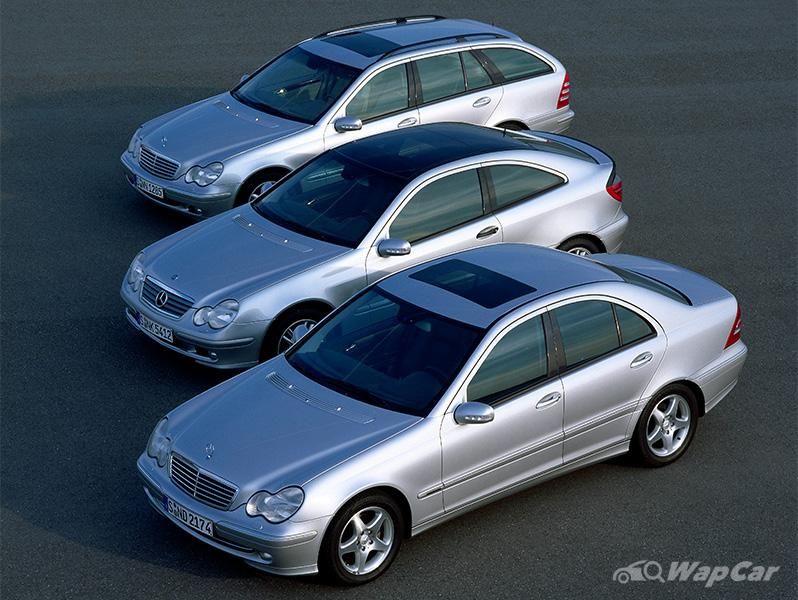 Having the hatchback design left out of the original baby Benz, the W201, Mercedes-Benz decided to expand the C-Class by offering the controversial SportCoupe for the W203 generation. The SportCoupe was Mercedes’ answer to the BMW 3 Series Compact both in terms of design and segment. 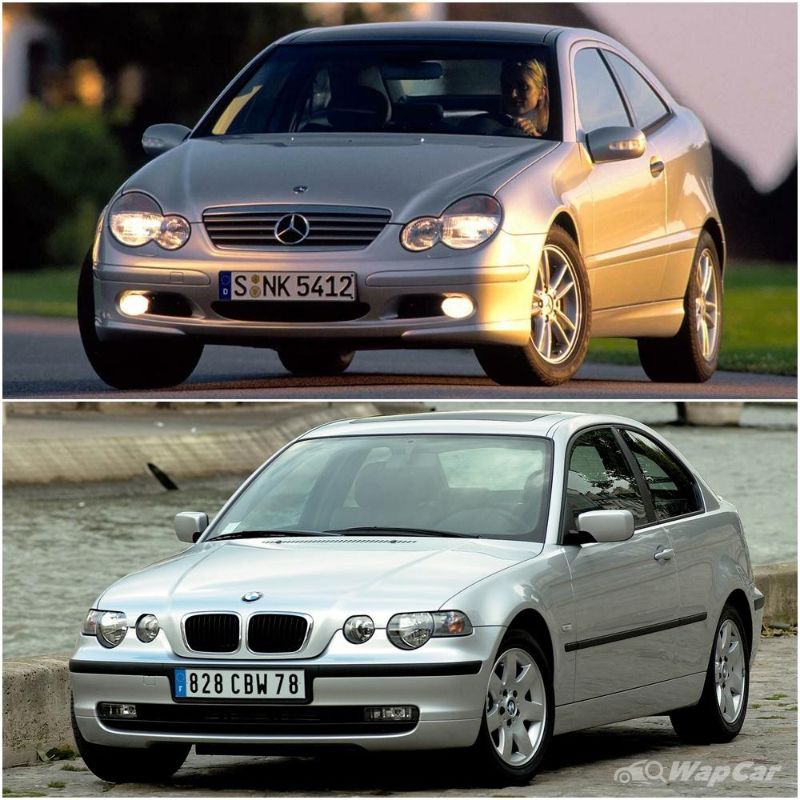 Both cars were marketed at buyers who wanted an affordable entry into a sporty Merc or Bimmer but between the two, most Malaysians are probably more familiar with the SportCoupe. 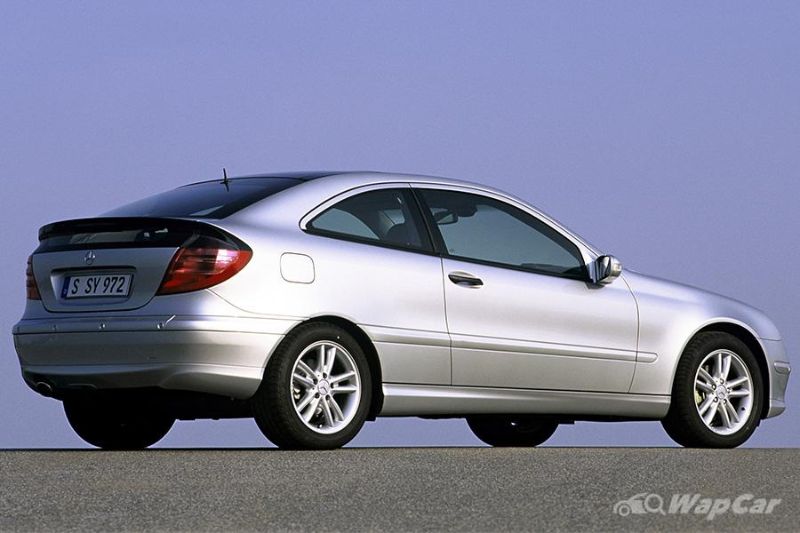 Even though it was the cheapest Mercedes-Benz coupe at the time, the C-Class SportCoupe was only a minor success. Mercedes revealed that the SportCoupe was popular among new customers and 40% of whom reportedly returned to buy more expensive models later. 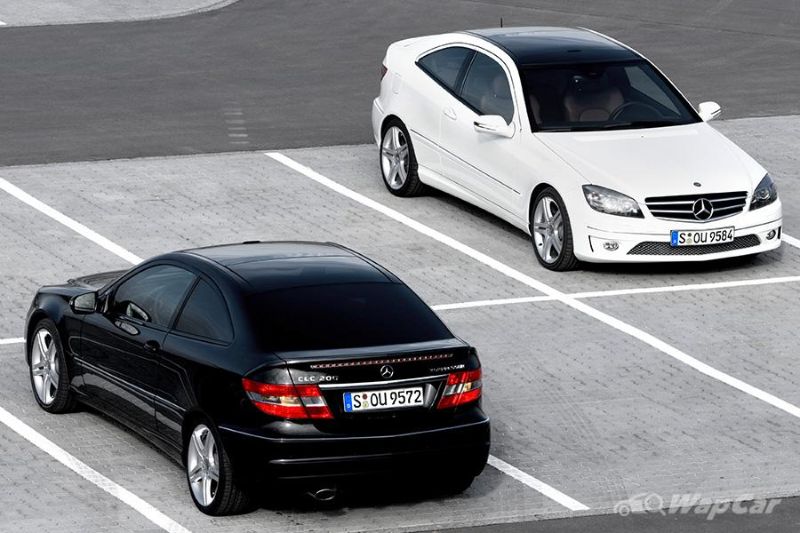 Interestingly, Mercedes-Benz continued selling the SportCoupe even when the next generation was introduced. Thinly disguised with a new front and rear design that matched the W204, the SportCoupe, now called the CLC-Class apparently had around 1,100 new components. 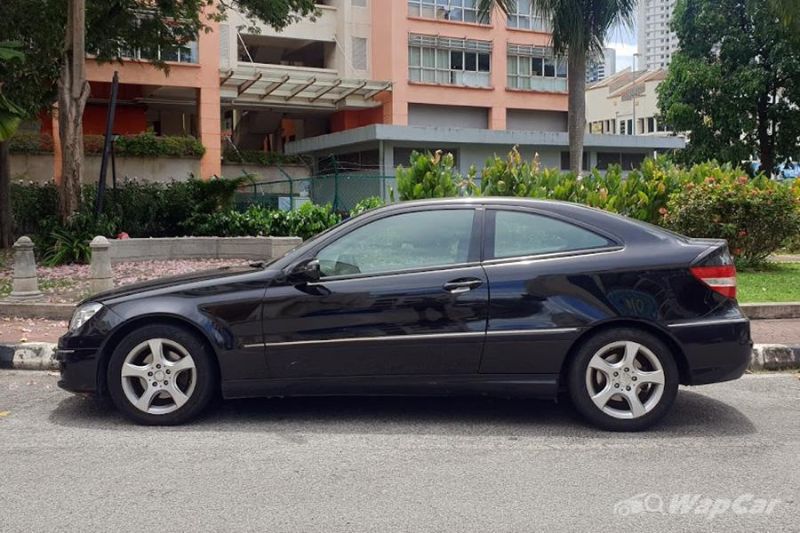 But it clearly didn’t fool buyers with production only happening for 3 years. Reviewers noted that despite the updates, it still felt old compared to rivals, not hiding the W203’s ageing platform. Mercedes-Benz would give the C-Class a proper coupe in 2012, replacing the largely forgotten CLC.

4. The W204 C63 AMG was the first Mercedes-AMG designed from the ground up 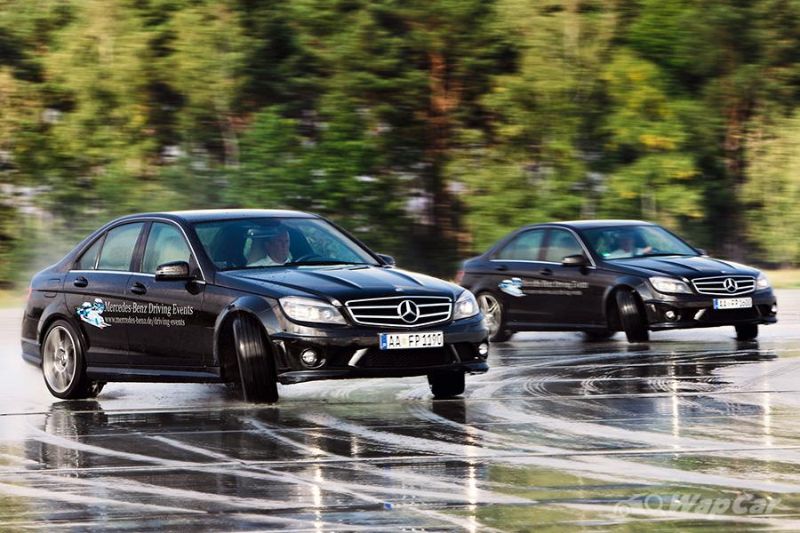 The W204 C63 AMG is considered a legend thanks to its 6.3-litre M156 V8 engine. Still, the V8 engine isn’t exclusive just to this generation as it has been offered on the most powerful AMG C-Class models since the C43 AMG was introduced in 1998. 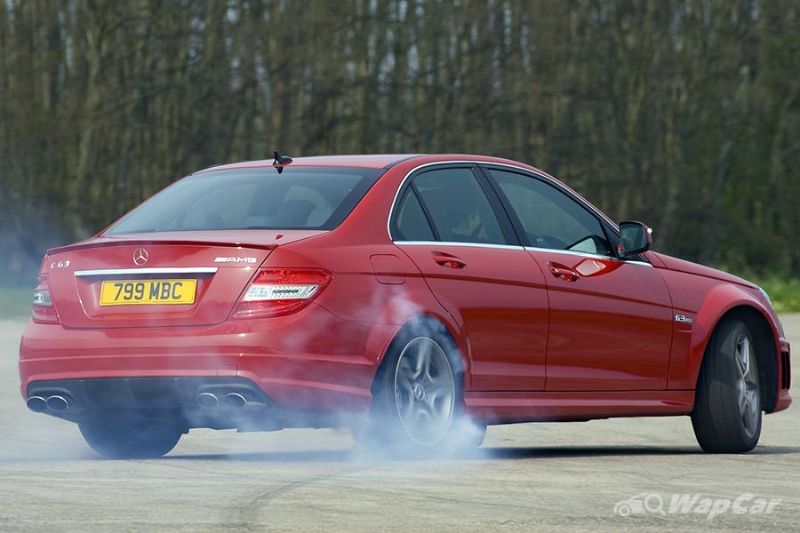 However, the W204 C63 AMG deserves a special place in AMG fans’ hearts as it is the last naturally-aspirated C-Class AMG model before switching to turbo. The C63 AMG was immensely more powerful than its chief rivals, the BMW M3 and Audi RS4 with the M156 unit making 457 PS and 600 Nm. 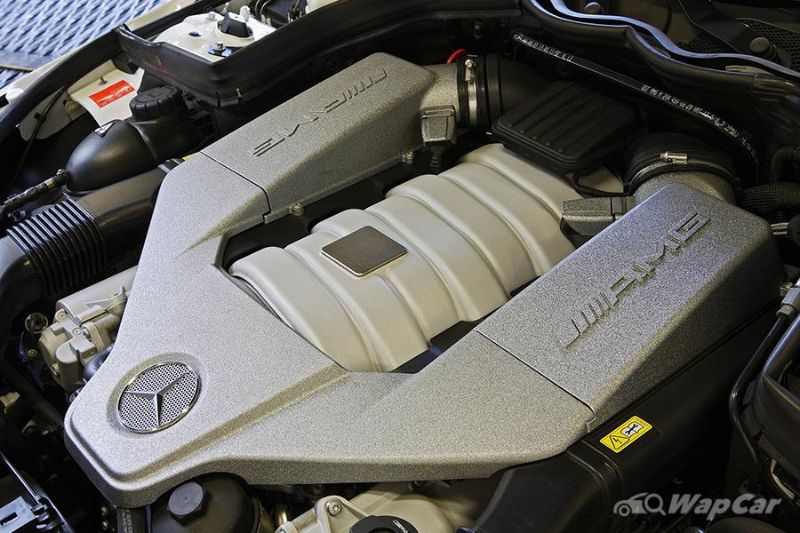 Besides being the last of its kind, the M156 is also the first engine to be completely developed and designed by Mercedes-AMG. Prior to the M156, every engine placed into the AMG models was merely tuned by the Affalterbach-based company and based on existing Mercedes-Benz engines. 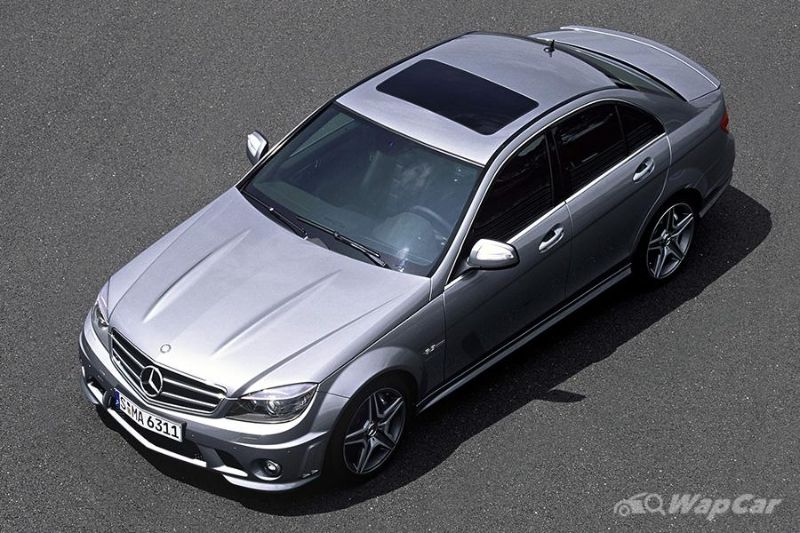 The W204 C63 AMG then marks both the beginning and the end of an era. The German muscle sedan is one of the most desirable Mercedes models and even though it isn’t very rare, it’s a definite future classic.

5. The W205 C-Class was the last entry by Mercedes-Benz in the German DTM

Despite sharing the same acronym, the DTM that the W205 competed in is slightly different from the DTM that was one of the most exciting touring car races in the world. Much like the British Touring Car Championship (BTCC), the Deutsche Tourenwagen Meisterschaft (DTM) was at its peak in the late 1980s and early 1990s.

Mercedes-Benz was the most dominant team in the original DTM winning the manufacturer championship for 5 years out of 7 when the award was introduced. Sadly, with declining attendances and competition with other international touring races, it ended in 1996.

DTM would make its return in 2000 with the M now standing for Masters instead and it saw the return of the German touring car championship. It couldn’t recapture the glory days of the previous decade but it still brought some excitement and some truly wild aero. 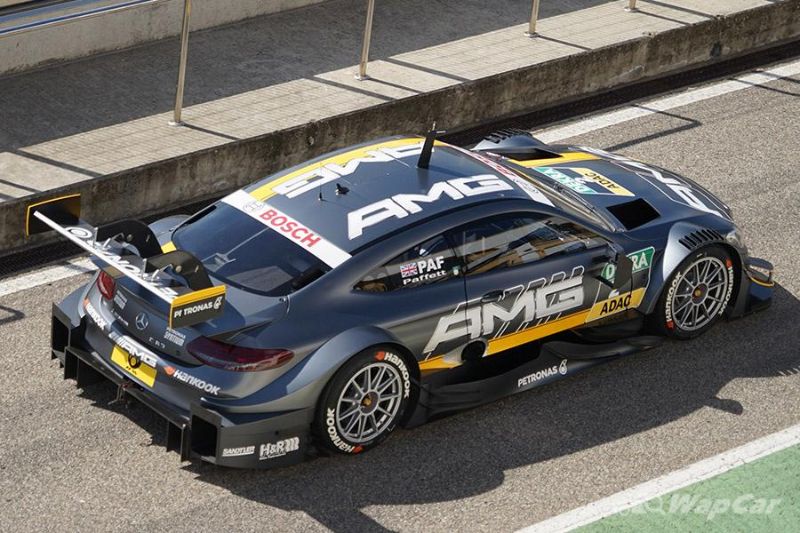 Competed exclusively by German car manufacturers, once again, Mercedes-Benz was dominating the new DTM and in 2012, it would begin racing with aerodynamically-designed C-Class coupes. Despite the success, Mercedes-Benz would eventually pull out of DTM in 2019 to focus its sights on Formula E.

However, it would make a return in 2021 but this time, it would enter as a privateer manufacturer, competing with Mercedes-AMG GT3 Evo race cars.

6. The C-Class All-Terrain is a crossover wagon that reminds us of a Subaru or a Volvo

The Mercedes-Benz C-Class was sold in all sorts of shapes and sizes including a coupe, a cabriolet, and a station wagon, apart from the S-Class lookalike sedan. Aside from introducing 4-wheel-steering, the latest W206 is also given an extra bump for its all-wheel-drive (AWD) variant. 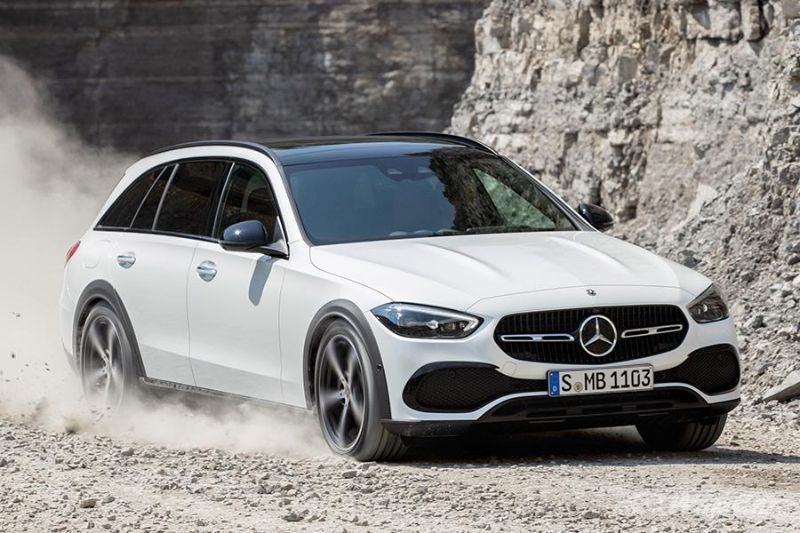 The 4Matic AWD system isn’t new on the C-Class with the feature being offered since the W203. However, this is the first time that Mercedes-Benz has introduced the jacked-up All-Terrain version to the C-Class. 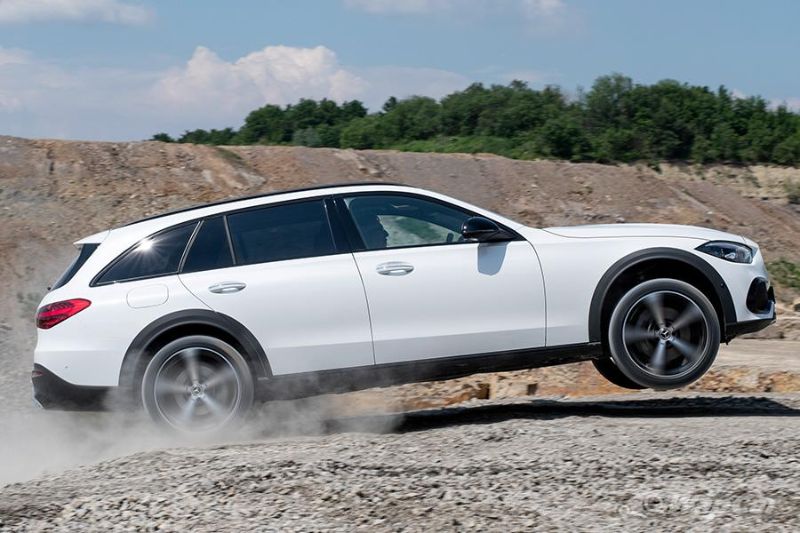 Much like its bigger brother, the E-Class All-Terrain, it is only available as a station wagon. The ride height is 40 mm higher than the standard S206 estate but just to make it more obvious, the C-Class All-Terrain (X206) has black plastic body cladding surrounding the wagon. 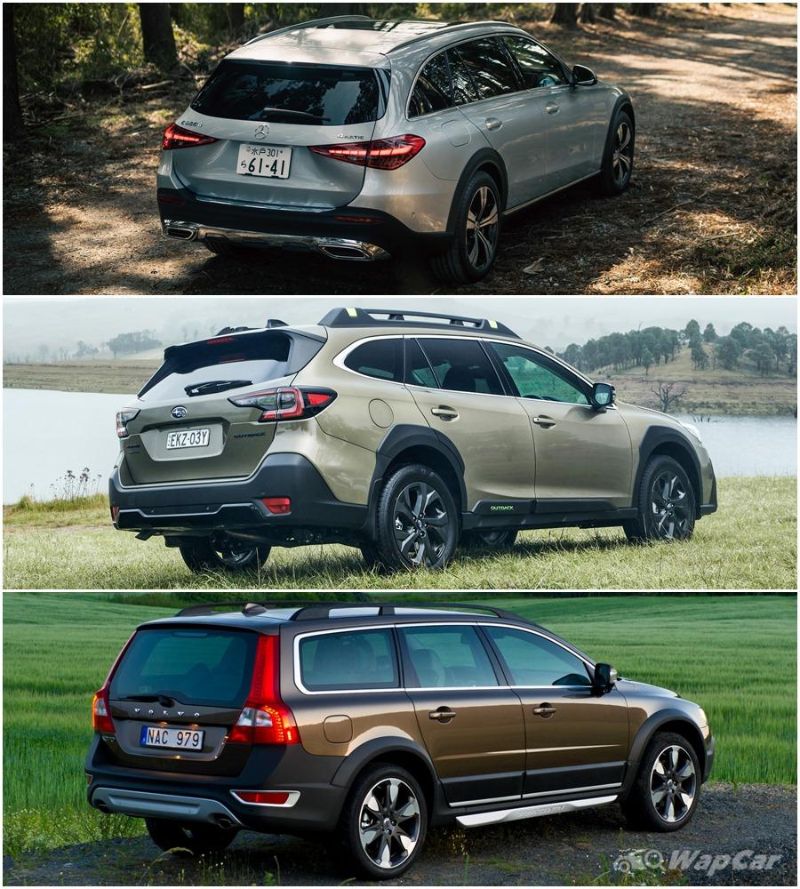 It mimics the Subaru Outback and Volvo XC70 in terms of looks and though wagons are never popular to begin with, perhaps adding some plastic bits around and marketing it as a crossover might change the sentiment. At least for the time being before Mercedes-Benz decides to completely axe its wagon line-up. 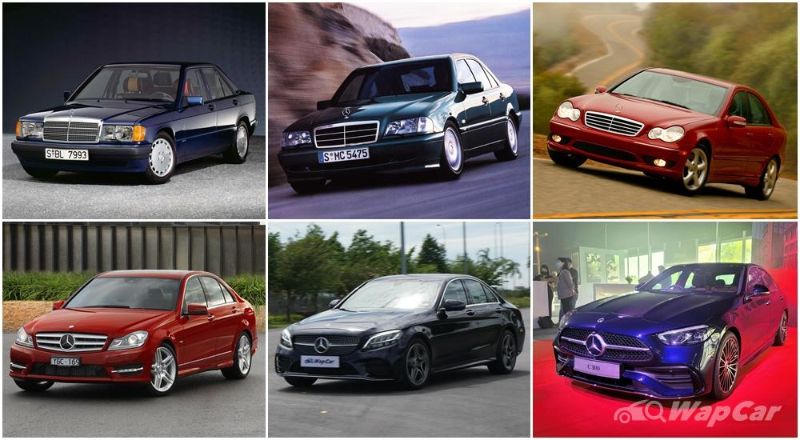 Those are some of the things you might not know about the Mercedes-Benz C-Class. Putting in the W201 might be a bit of a cheat since it isn’t technically a C-Class but we think that the original "compakt-klasse" would never turn up if it wasn’t for the original baby Benz.

Also read: The original Baby Benz – The history of the Mercedes-Benz W201