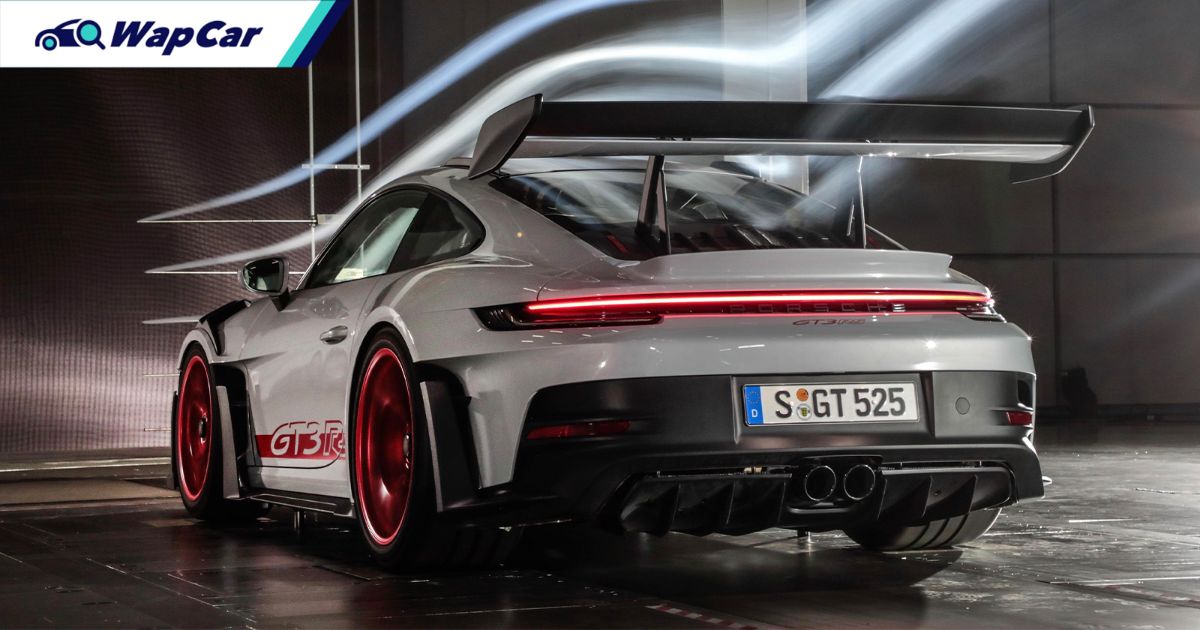 As with any new iteration of the Porsche 911 GT3 RS, the GT division makes us wonder how much further they can push the game forwards in terms of outright lap times. Now it even has F1-style drag reduction system (DRS), foreshadowing its entry perhaps? 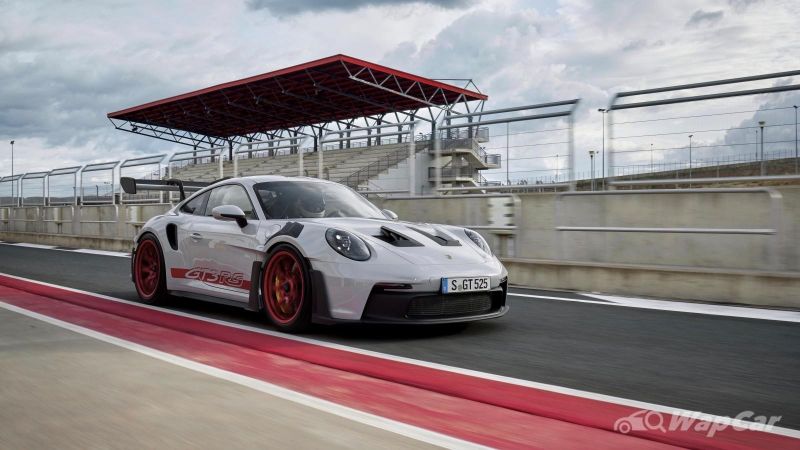 Anyway, let’s talk about the basics. The 992-generation Porsche 911 GT3 RS still has a 4.0-litre naturally aspirated flat-six engine that’s good for 525 PS/465 Nm. The 7-speed dual-clutch transmission gets a shorter final drive ratio than the ‘regular’ GT3 to account for the larger wheels and aero bits. 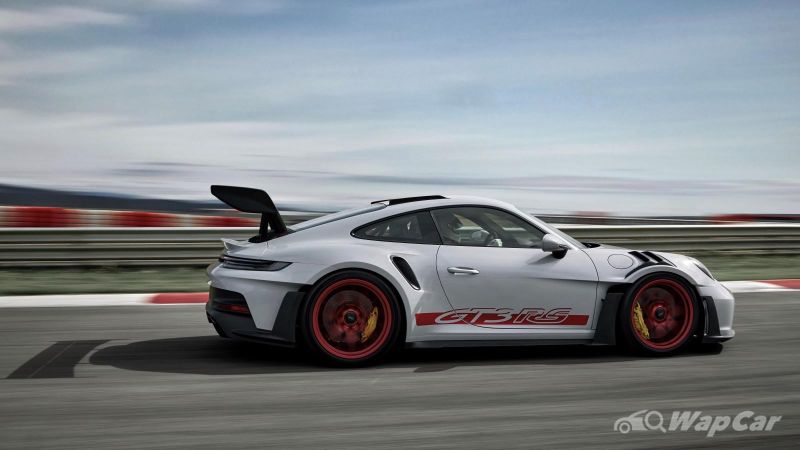 0-100 km/h is completed in 3.2 seconds and tops out at 296 km/h. Though those numbers don’t mean much when it’s a track weapon like the GT3 RS, it’s about how much speed it carries through corners and how strong your neck muscles are. 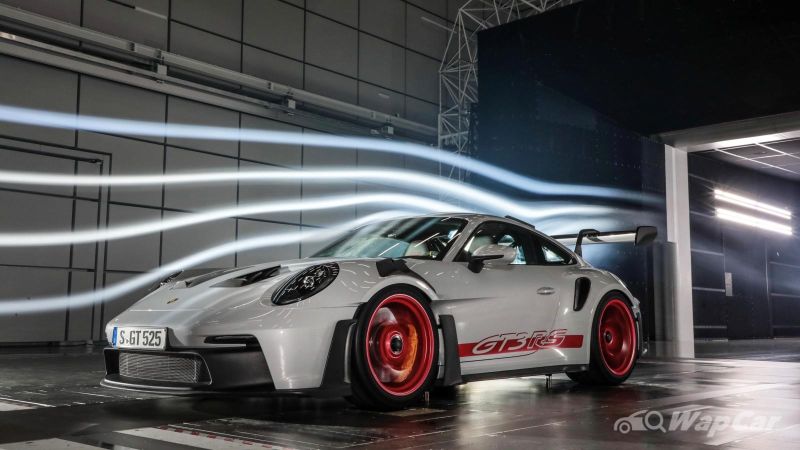 To that end, the aerodynamic bits like the massive rear wing and other measures generate twice as much downforce as its 991.2-generation predecessor and three times as much as a current 911 GT3. At 285 km/h, total downforce is 860 kg.

The DRS is deployed to achieve low drag and higher speeds on straight sections of the track, the DRS allows the wings to be flattened out at the push of a button, within a specific operating range. 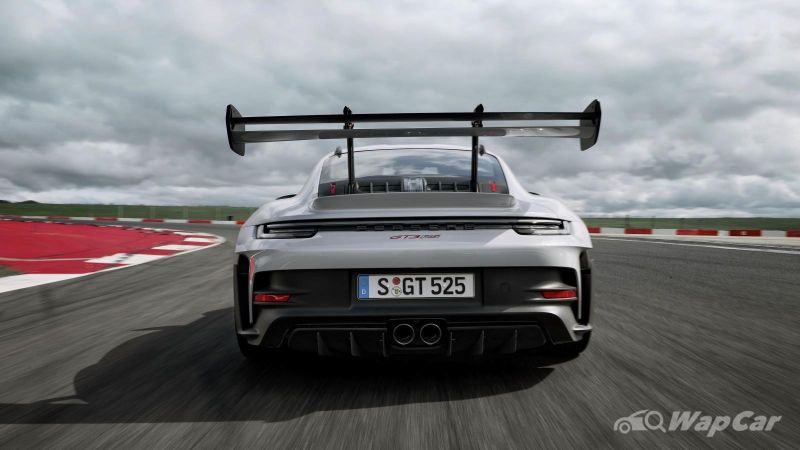 Inlets behind the front wheels reduce the dynamic pressure in the wheel arches. Sideblades behind the intake ensure that the air is directed to the side of the vehicle.

Air from the centrally positioned radiator flows out via large nostrils on the front lid. Fins on the roof direct the air outwards, ensuring cooler intake temperatures in the rear. 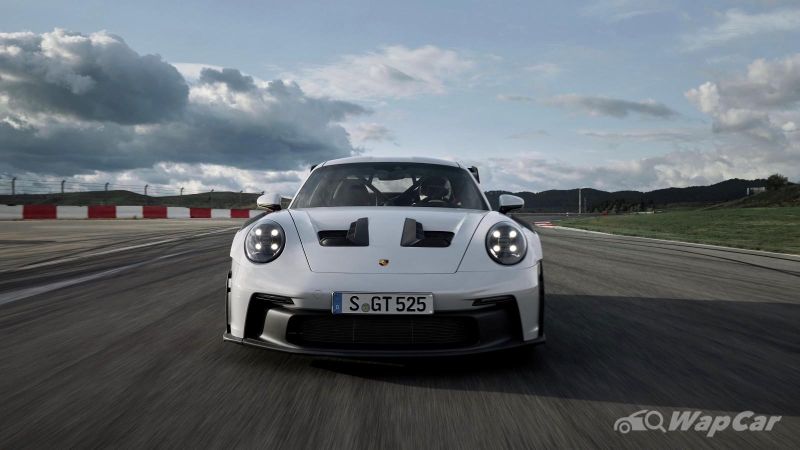 In the new 911 GT3 RS, the openings in the rear side panel are used exclusively to improve aerodynamics and not to draw in process air. The rear wheel arch also features an intake and a sideblade for optimised airflow. 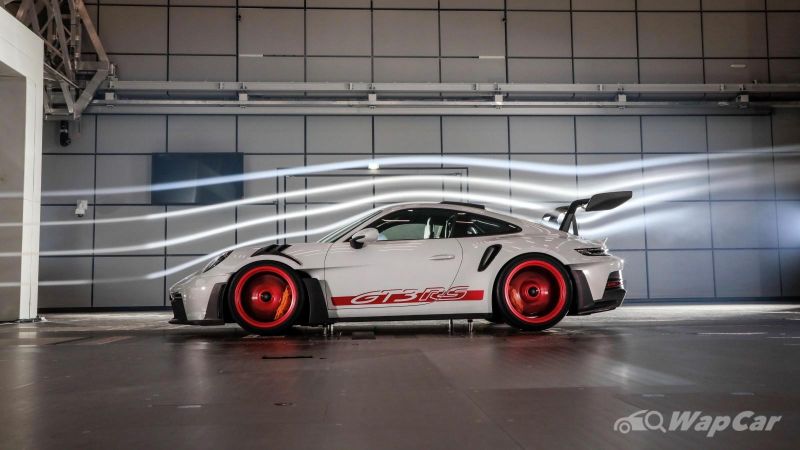 Even the suspension comes in for aerodynamic attention. Because the wheel arches of the new 911 GT3 RS are subject to powerful airflows, the components of the double-wishbone front axle are designed with teardrop-shaped profiles. These increase downforce on the front axle by around 40 kg at top speed. 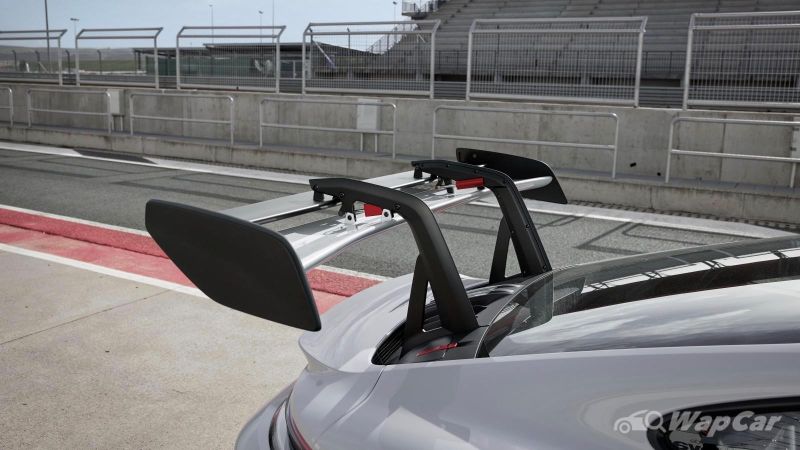 To cope with the increased downforce, the multi-link rear axle has been adjusted, spring rates have been bumped by up to 50 percent, and the front ball joint of the lower trailing arm has been set lower on the front axle. 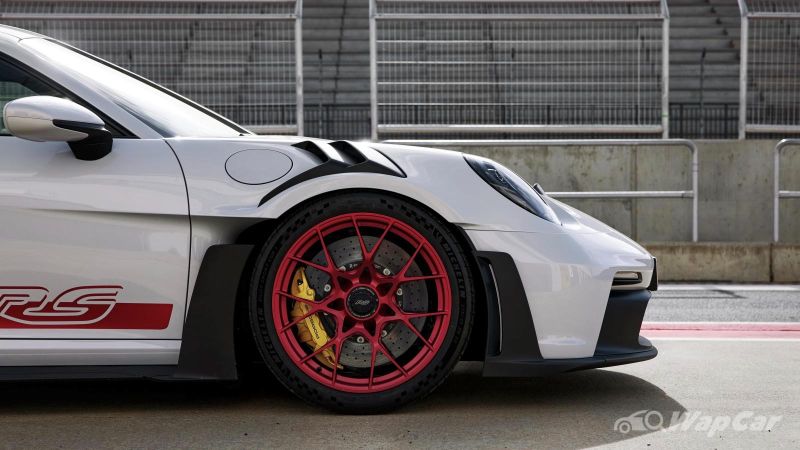 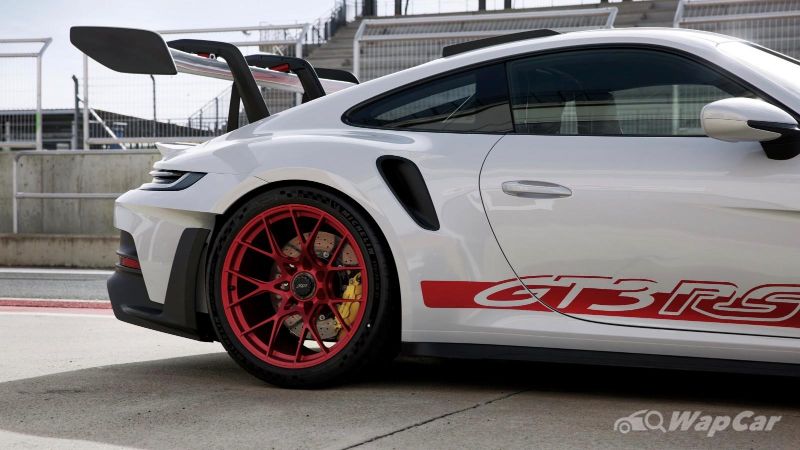 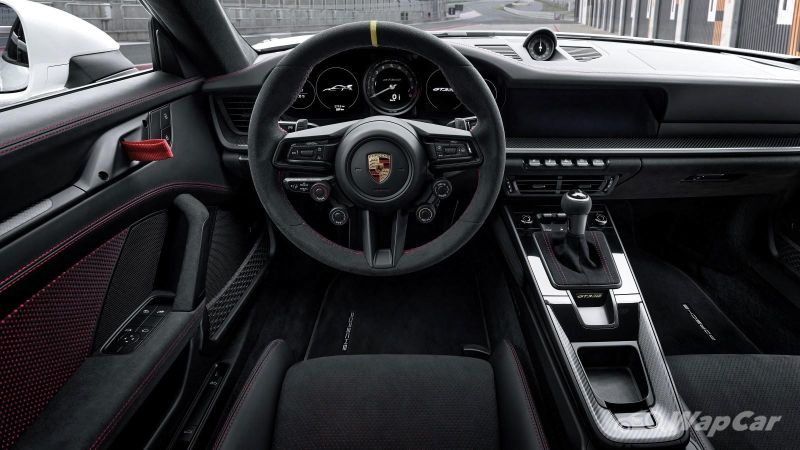 Another highlight is that the 992-generation 911 GT3 RS allows individual compression and rebound damping adjustments for the suspension on the fly, something hardcore enthusiasts will appreciate how much hassle it saves.

These can be adjusted via the rotary controls on the steering wheel, which can also adjust how aggressive the rear differential locks up. 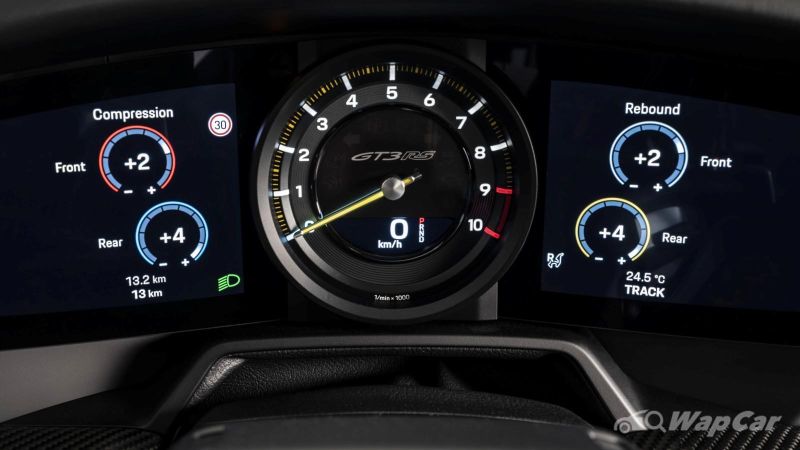 The weight of the go-fast technology is counteracted by the extensive use of carbon fibre materials, such as doors, front wings, roof, front lid, and the bucket seats. All in, the 911 GT3 RS weighs in at 1,450 kg, only 15 kg more than the standard GT3 depending on specifications. 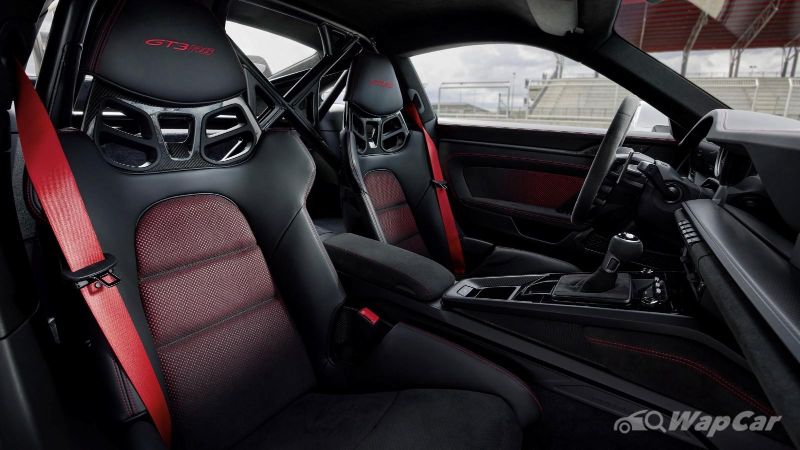 Speaking of specifications, there’s the Clubsport package at no extra cost. This includes a steel rollover bar, a hand-held fire extinguisher and six-point seat belts for the driver.

There’s also the Weissach package, which does involve extra cost, but buyers probably wouldn’t think twice about getting. 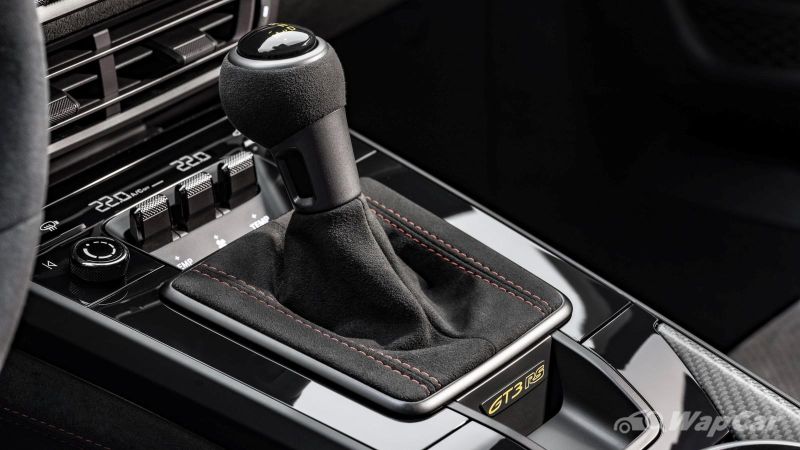 The front lid, roof, parts of the rear wing and the upper shell of the exterior mirrors feature a carbon-weave finish. The front and rear anti-roll bars, the rear coupling rods and the shear panel on the rear axle are made of carbon fibre. 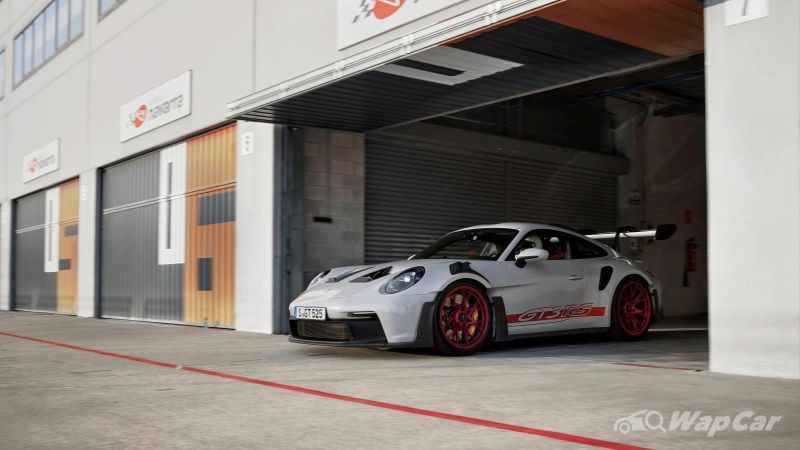 Another highlight of the Weissach package is the PDK shift paddles with motorsport-derived magnet technology. Optionally available with the Weissach package are magnesium forged wheels, which save another eight kilograms. If you're already going all out, might as well right?