HomeNewsThe cult of the Toyota AE86 in Malaysia - An over-glorified anime car?

The cult of the Toyota AE86 in Malaysia - An over-glorified anime car? 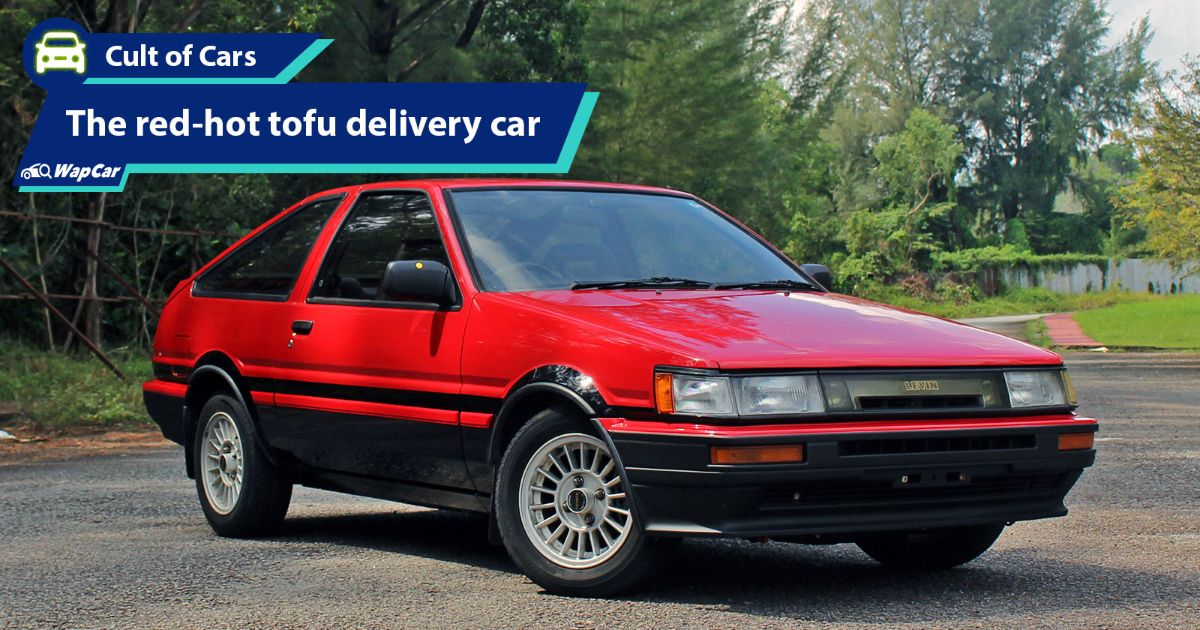 For a lot of us petrolheads, the origins of why we love cars often come from various media. The spark could come from video games like Gran Turismo or movies like The Fast and the Furious but when it comes to our featured car, the Toyota AE86 really needs no introduction. 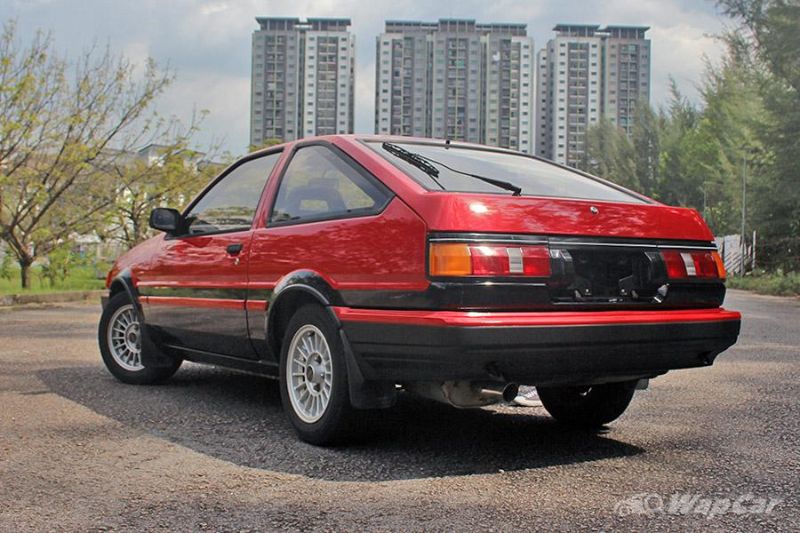 The anime/manga/movie that featured the famous black and white liftback with a tofu shop name inscribed on the driver’s door brought the art of drifting to a mainstream audience. My esteemed colleague and WapCar BM’s editor, Zamil, is himself a professional drifter and Initial D was the spark that ignited his love of moving sideways with style.

The Hachiroku was the last Corolla to be given the rear-wheel drive (RWD) set up at a time when the fabled name switched to a more conventional front-wheel drive (FWD) layout. Even though both the Corolla Levin and Sprinter Trueno soldiered on for a few more generations, none of the successors can match the same following as the AE86. 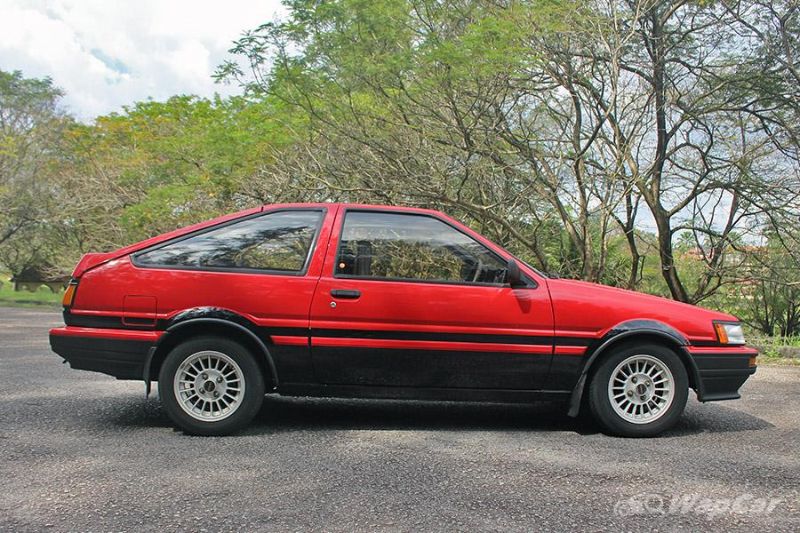 Despite the legendary cult status the AE86 has achieved, it is merely a car of its time and that’s how I really felt when I was behind the wheel of this pristine 1986 Toyota Corolla Levin.

That’s what an uncouth person would say the moment they laid eyes on this Levin because it wasn’t sporting the iconic black and white paint job nor was it a Trueno with the equally iconic pop-up headlights.

You can probably blame Initial D for that mistake in assuming that just because it ain't a Trueno, it ain't an 86. For those who have never watched the anime, the main character, Takumi Fujiwara’s goofy-looking friend, Itsuki Takeuchi mistakenly bought an AE85 Corolla Levin thinking it was an AE86.

As a result, he got mocked by his friends but in the spirit of heroism, Fujiwara showed his buddy just how equally good his 85 is down Mount Akina. That is down to the driver’s skill and the AE85 has been relegated to mockery since.

Beyond the fantasy of anime though, the AE86 found its true calling in the drifting scene thanks to the RWD layout and the fact that it was affordable at the time. Notice what I am emphasising in the last sentence because when the AE86 was launched in the 1980s, it was mainly a gateway car for those entering motorsports at a grassroots level.

Drifting in the 1980s was a fun amateur pastime with minimal corporate backing and it was at these tracks and mountain routes did the appeal of the AE86 started to rise. Big names in the Japanese drift scene like Keiichi "Drift King" Tsuchiya and Manabu “Max” Orido honed their craft behind the wheel of a Hachiroku and the car easily dominated the drifting world. 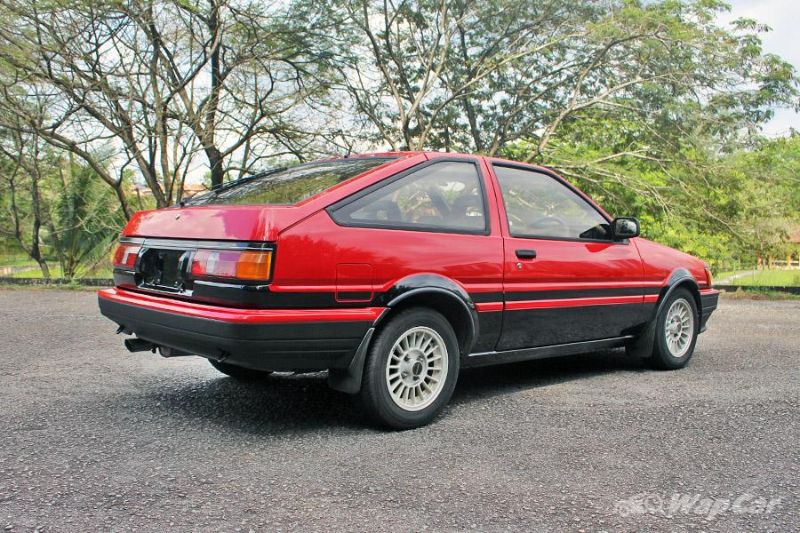 The AE86's legend is so strong that the two digits were placed on another affordable but not-so-powerful RWD sports car for the modern era. The Toyota 86 is even the hero car in MF Ghost, an upcoming anime created by the same mind behind Initial D.

Also read: MF Ghost will continue to crank that Eurobeat as the spiritual successor to Initial D

From enthusiasts to collectors 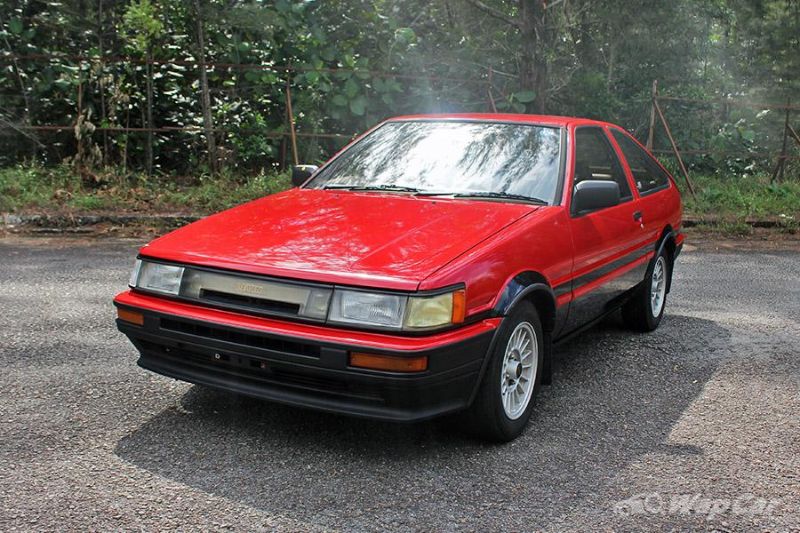 The AE86 was also sold outside of Japan, simply as the Corolla and depending on the market, some would offer fixed headlights (Europe) while others would offer the famous pop-up lights (North America).

Also read: This Toyota Corolla AE86 sold for RM 270k in UK auction and was nearly scrapped off

Still, just because of those two even numbers, prices of the AE86 have skyrocketed in recent years to the point that there is a term for them – Takumi tax or Tofu tax – which were named after Initial D.

We won’t reveal the price of this red AE86 Corolla Levin but you can probably take a guess at how much it’s worth just by scrolling through the online classifieds, be it local or international. 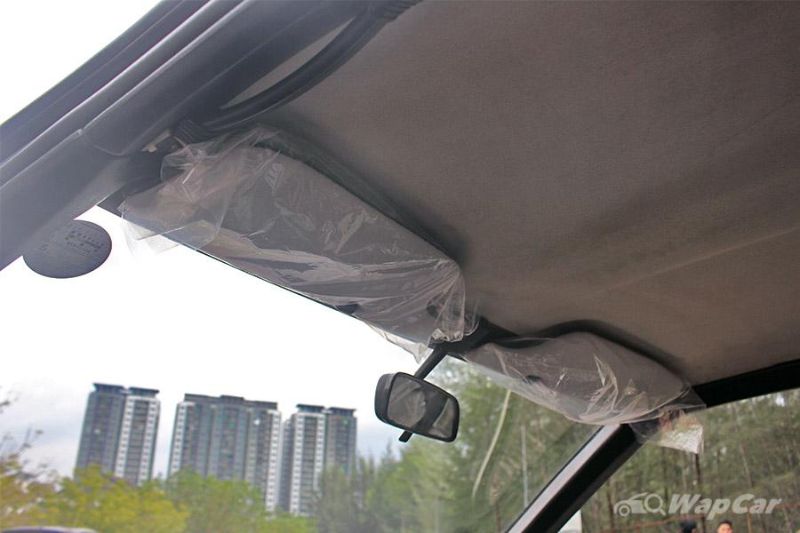 That said, this AE86 is one of the cleanest examples we have ever seen and it was meticulously restored back in Japan. Even the sun visors still have plastic wrap around them!

Also read: GR Heritage expands parts reproduction for Toyota AE86 so tofu deliveries can go on without a hitch 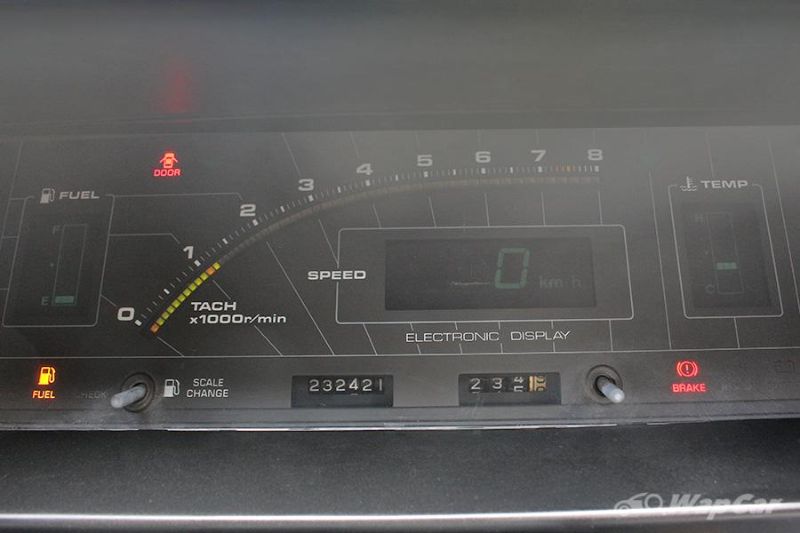 Being a car from the 1980s, it also has a digital electronic display which was a trend at the time. The "futuristic" dot matrix display shows the tachometer, speedometer, fuel, and temperature gauge.

It was also only available on the top-of-the-line 1600 GT Apex with the rest of the AE86 variants fitted with traditional analogue dials.

One feature that this Corolla Levin 1600 GT Apex shares with the luxurious Toyota Century is a toggle to change the fuel gauge scale. This is used to see how much fuel is really left once it shows empty. It’s an overlooked feature for a car that is mostly used to be driven sideways with style.

Also read: We experience true luxury in one of the few Toyota Century units in Malaysia

But therein lies the issue with a car from the 1980s especially with all the hype surrounding the AE86. If you worship the Toyota sports car as the ultimate form of cheap and fun, look away because reality is going to hit you harder than slamming the guard rails of a mountain pass.

The mythical air of the AE86

This AE86 is powered by a 1.6-litre 4A-GEU DOHC 4-cylinder engine which is among Toyota’s most legendary powerplants thanks to the numerous ways you can tune around it. In its stock form, however, the “Blue Top” powerplant makes up to 130 PS which while revvy doesn’t really feel that way when you’re driving it. 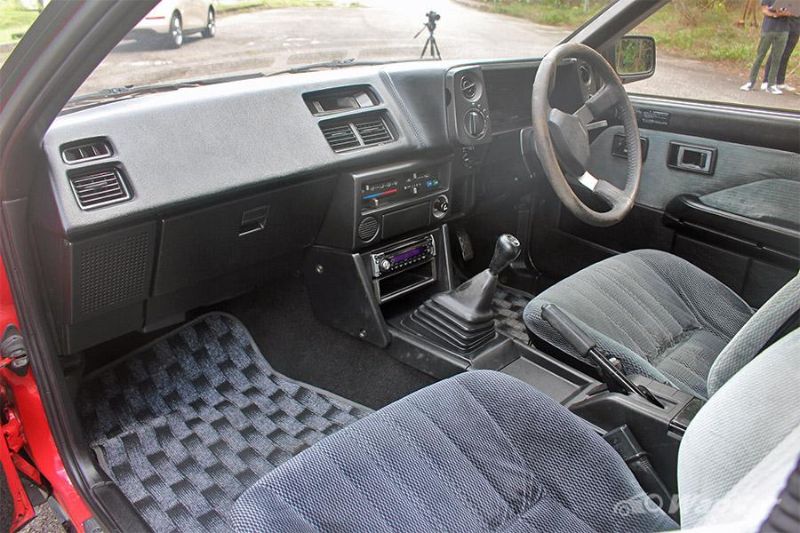 Not to burst your fantasy but driving a stock AE86 feels like you’re driving any car from the 1980s with a vague steering feel and not much power. I would comment that it drives like the original Proton Saga but that would trigger some readers as I insulted their hero. 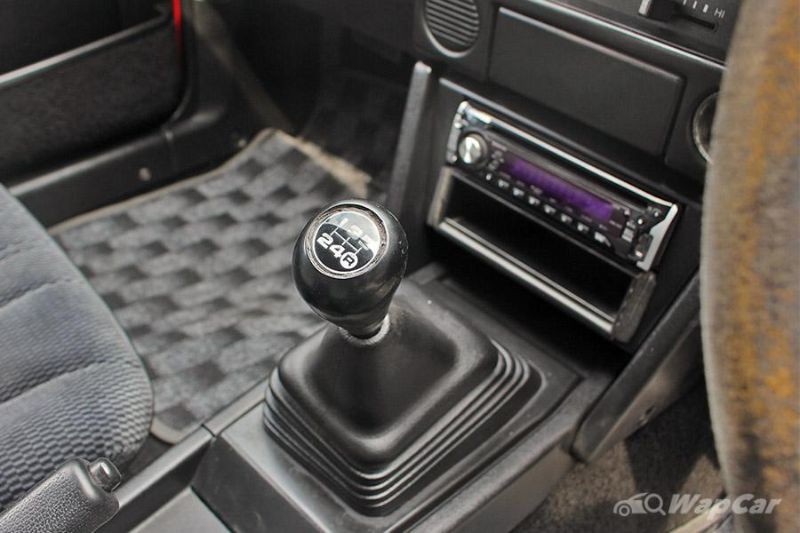 But I never said my time in the AE86 was disappointing. The gear changes are precise and it can be fun around the corners. Honestly, though, the AE86 isn’t my hero car personally and I know it is not some hair-raising sports car as some people claim it to be. 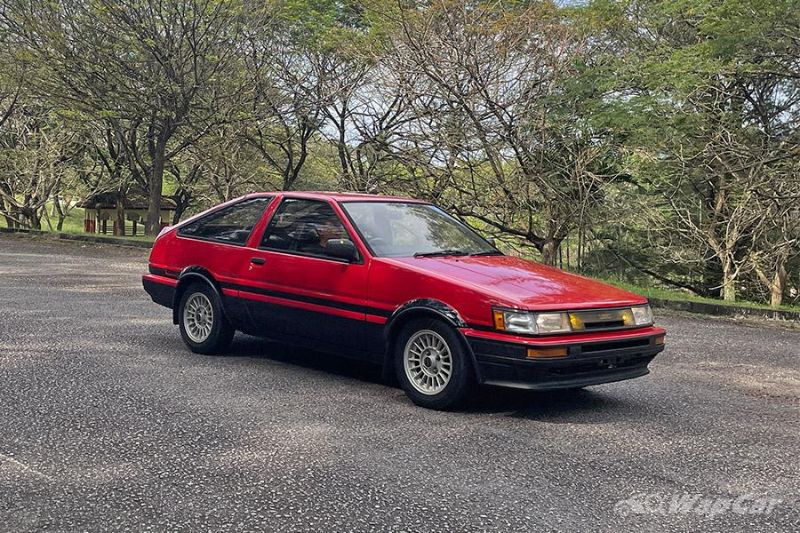 That’s the unfortunate situation surrounding the AE86’s cult status. It’s the hero on 4 wheels that everyone says you should “drive before you die” but what some of these people don’t tell you is that this sports car is more like a humble mortal than some rubber-burning legend. 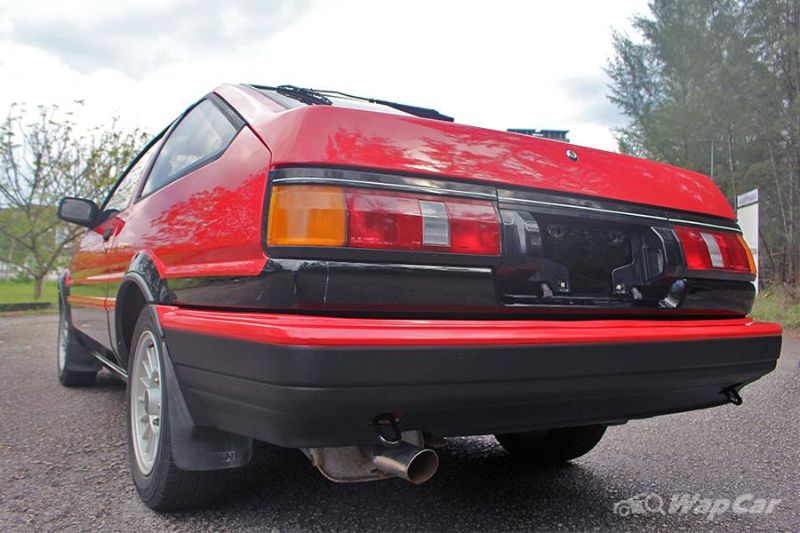 Take away all that clout and the AE86 is truly a simple car to enjoy with your mates. It’s a youthful car from the 1980s and a nice swansong to the Corolla’s RWD days. In the hands of a more experienced driver around the corners and with a lot more tuning, the AE86 can live up to the hype but that is not what the AE86 should be relegated to.

Also read: Always wanted to drift? Let WapCar Plus teach you - with a Toyota GR Supra no less! 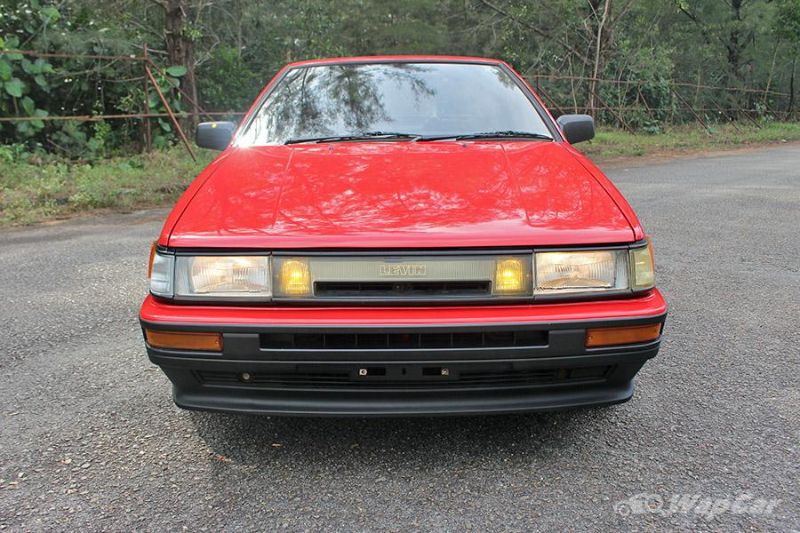 It was an affordable car and as such many were used in tracks to be drifted around or in circuits doing gymkhana. It was even in production for 4 years so it wasn’t exactly rare though many have been punted off the track or the road. 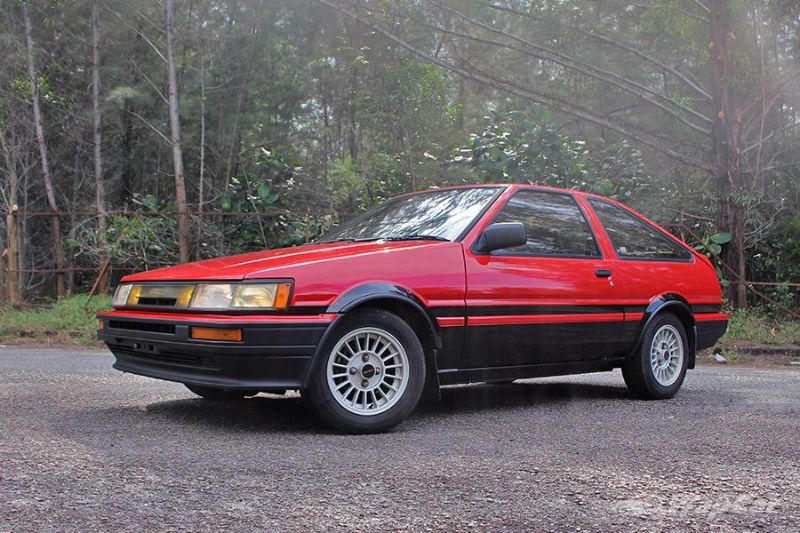 However, thanks to an anime showcasing the heroic adventures of a tofu delivery boy as he tries to not spill a drop of water while driving, the AE86 is something that is unattainable and too expensive. If Initial D is set today, Fujiwara would only use his Trueno as a mascot to attract petrolheads to buy his tofu.

Special thanks to Lijet of Fotografia De Lyzard for allowing us to do a shoot on this clean AE86. He also does car detailing so if you're interested, give him a follow.