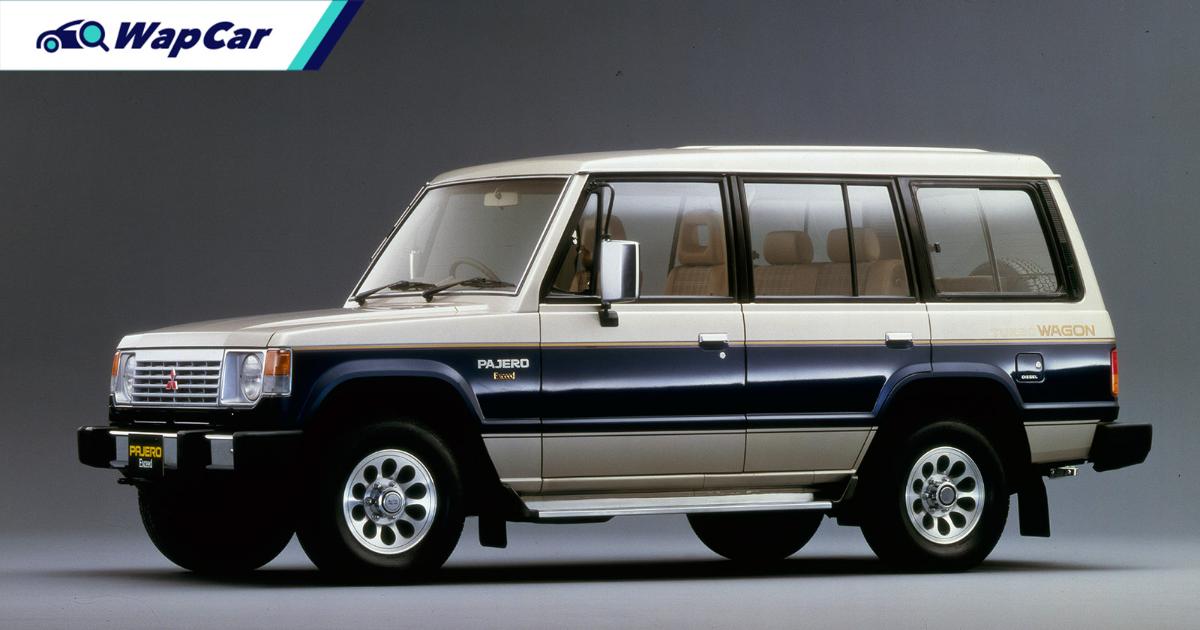 There was a time when SUVs weren’t a big thing and were more of a utilitarian 4x4 than a trending crossover. None matches the bulletproof and macho 4x4 quite like the Mitsubishi Pajero, Isuzu Trooper, and the Toyota Land Cruiser. 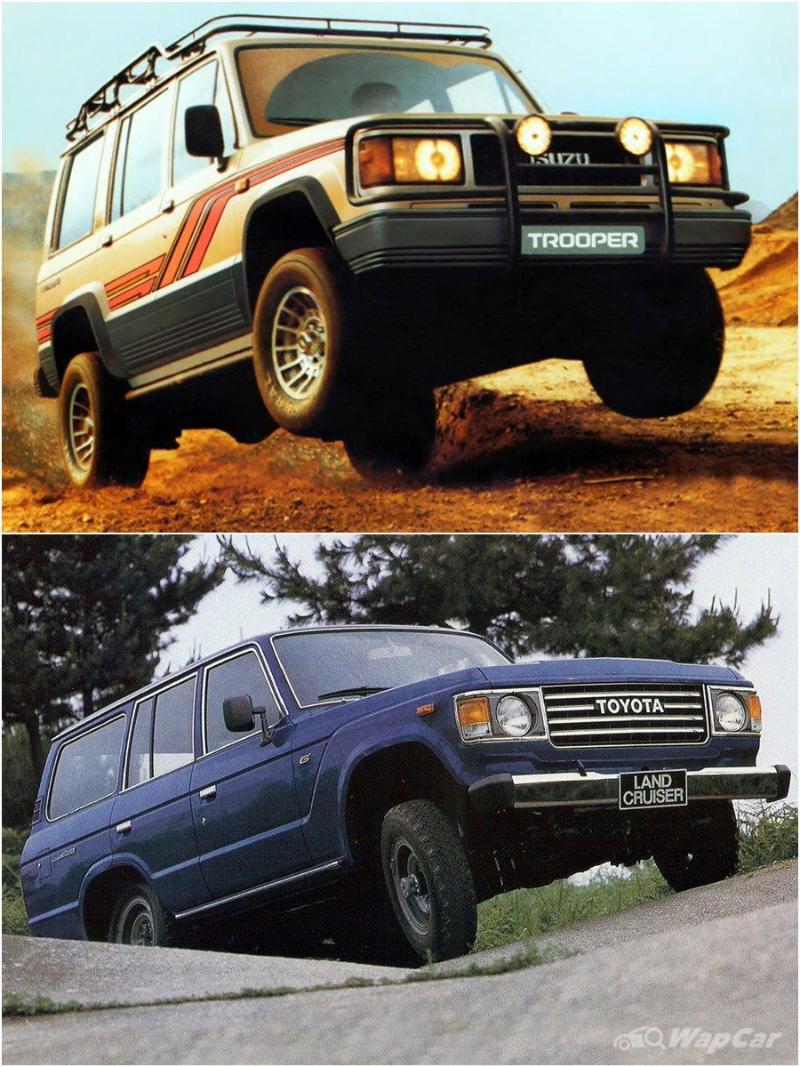 Out of those three, only the Land Cruiser managed to survive today with the Trooper being trooped out many years ago and the Pajero being discontinued in 2020. We’ve done a sort of eulogy for the Pajero but today, we’re celebrating the very first Pajero and how it came to be.

The beginning – Expanding beyond the Jeep 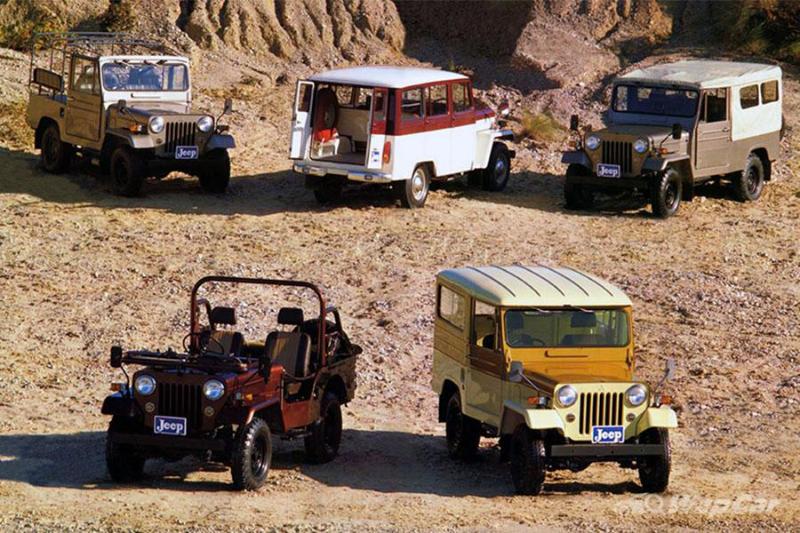 Prior to the launch of the Mitsubishi Pajero, Mitsubishi Motors Corporation (MMC) had a 4x4 in its line-up, the Mitsubishi Jeep. It was a licensed copy of the Willys Jeep and was launched in Japan in 1953. 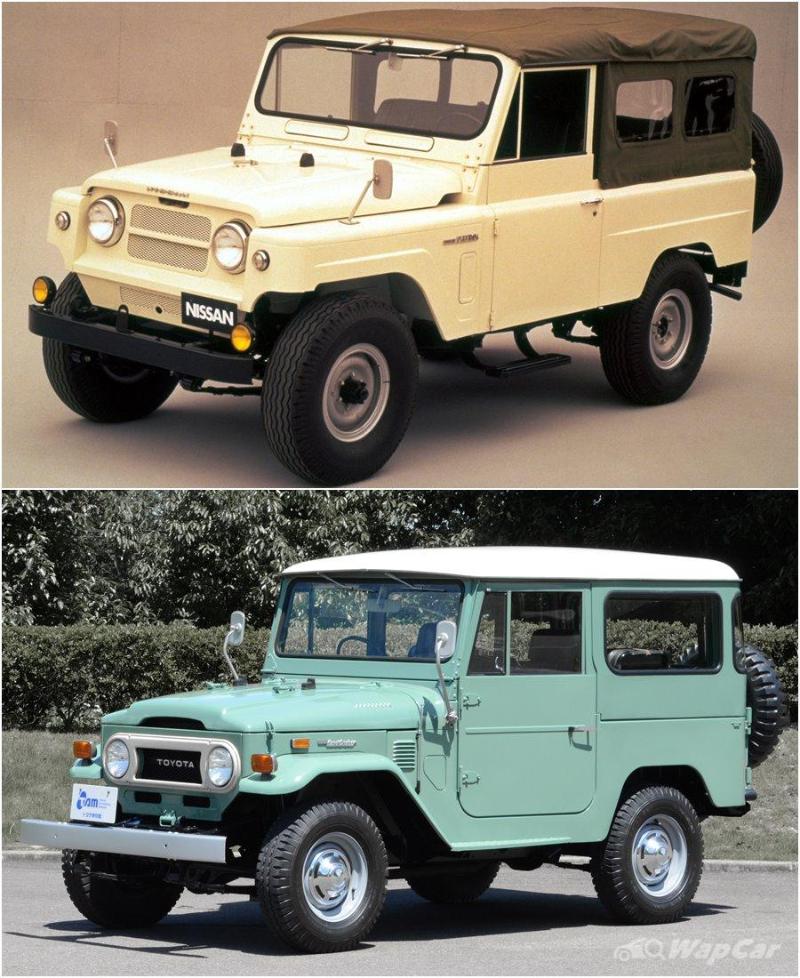 However, due to the licensing agreement between Jeep and MMC, the Mitsubishi Jeep wasn’t allowed for exports overseas. Hence, while rivals like the Nissan Patrol and the Toyota Land Cruiser slowly took over the 4x4 world from Land Rovers, Mitsubishi couldn’t expand beyond the Land of the Rising Sun. 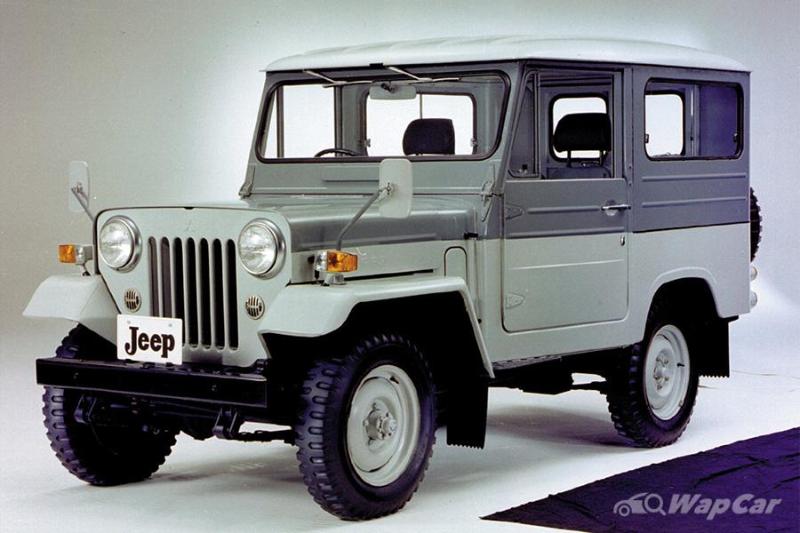 Then in the 1970s, MMC decided to tap into the global 4x4 market, and to do so, they needed to develop one of their own. For Mitsubishi, this was short of an easy job as it has been 4x4 experts even before they licensed the American Jeep. 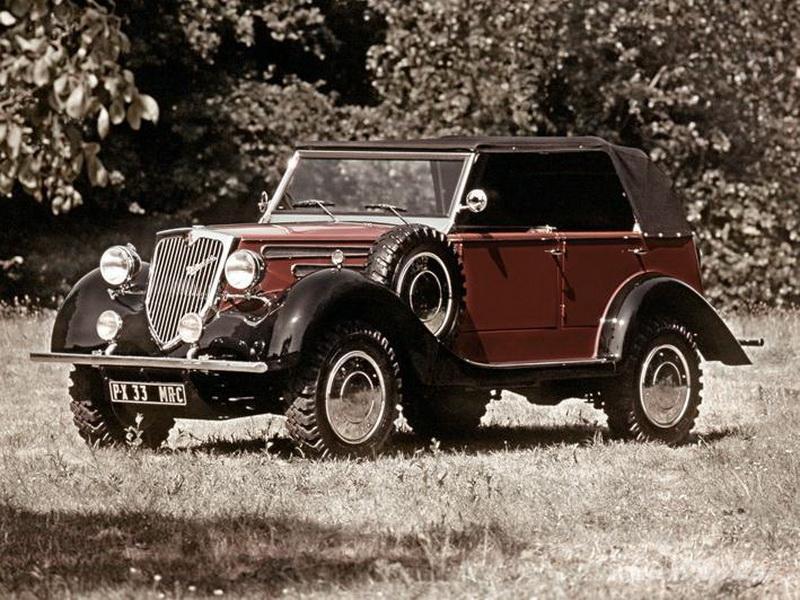 In 1934, Mitsubishi Heavy Industries (back when MMC wasn’t formed yet) produced a handful of PX33 prototypes. This 4-door convertible had an innovative trick under its contemporary 1930s design.

It was Japan’s first-ever sedan with full-time 4WD and was powered by a 6.7-litre direct-injected diesel engine that produced only 70 PS. 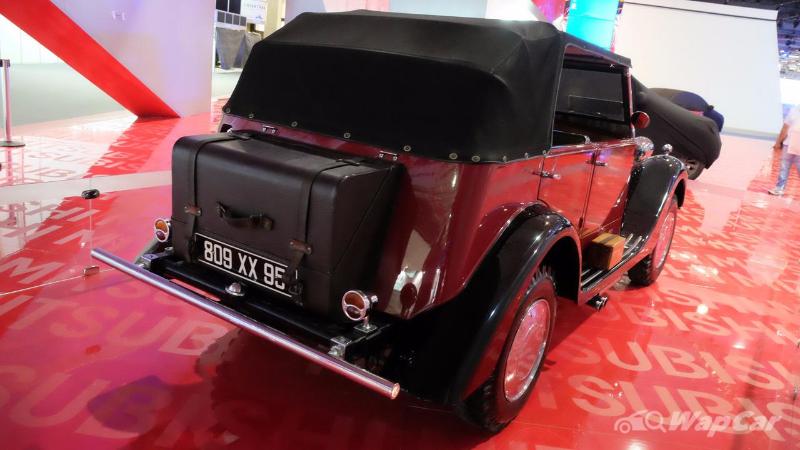 Unfortunately, that project was scrapped as the Japanese government decided on MHI to focus on commercial vehicles and warplanes instead. Decades later, as Japan repented itself from its World War II atrocities, the engineers at MMC decided that they should develop its own 4x4. 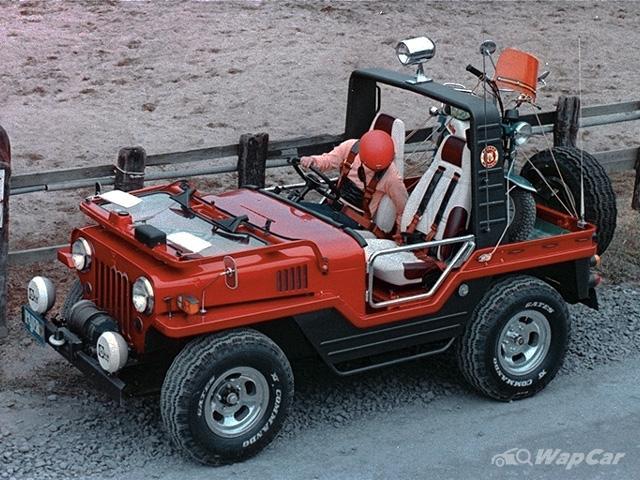 At the 1973 Tokyo Motor Show, MMC launched the first Pajero prototype. It looked pretty much like the Jeep CJ-5 and was billed as a leisure off-roader. Looking too similar to a Jeep, MMC headed back to the drawing board. 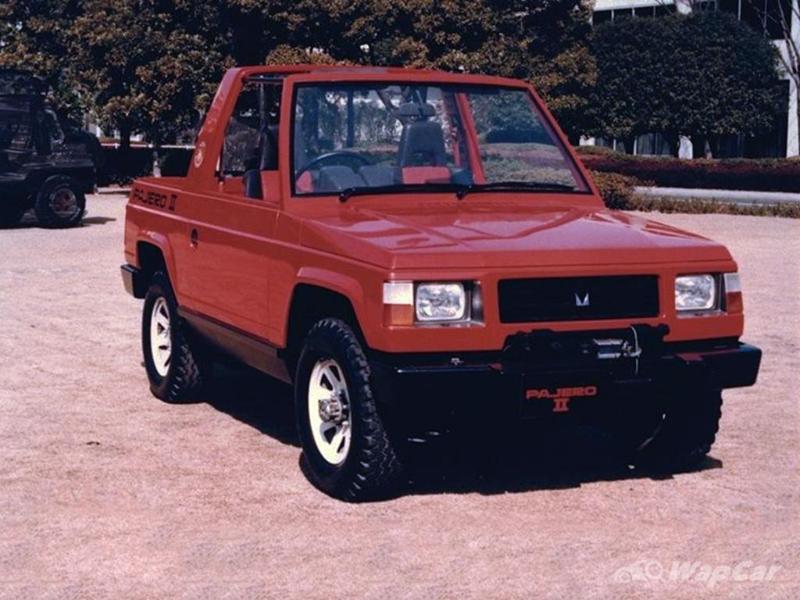 Six years later, at the 1979 Tokyo Motor Show, the second Pajero prototype was unveiled. As Mitsubishi wanted the Pajero to be more of a leisure off-roader, the Pajero II retained the convertible look. 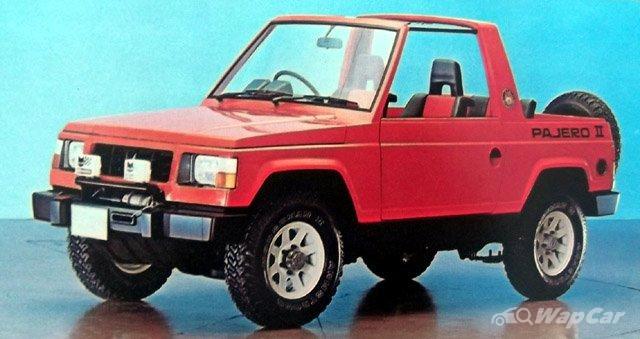 However, it previewed a sign of things to come. Its boxy style was simple, macho, and utilitarian, not exactly alien to the traditional buyers who wanted that sort of thing on their 4x4s.

Following the better reception on the second prototype, MMC green-lit the Pajero for production in 1982 and thus, began the dominating presence of Mitsubishi in the 4x4 limelight.

What’s in the name? 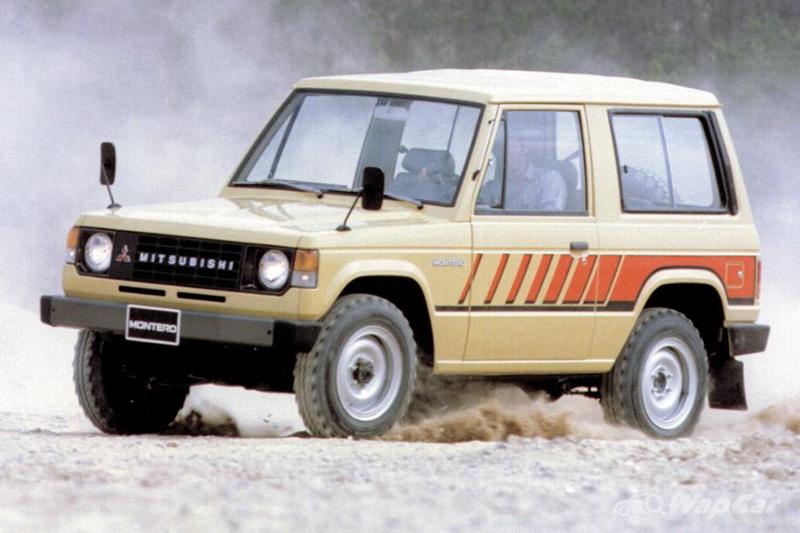 The name Pajero might have some obscene connotations in Spanish-speaking countries but that wasn’t MMC’s intention obviously. The name was actually derived from the species name of the Pampas cat (Leopardus pajeros), a wildcat native to South America. 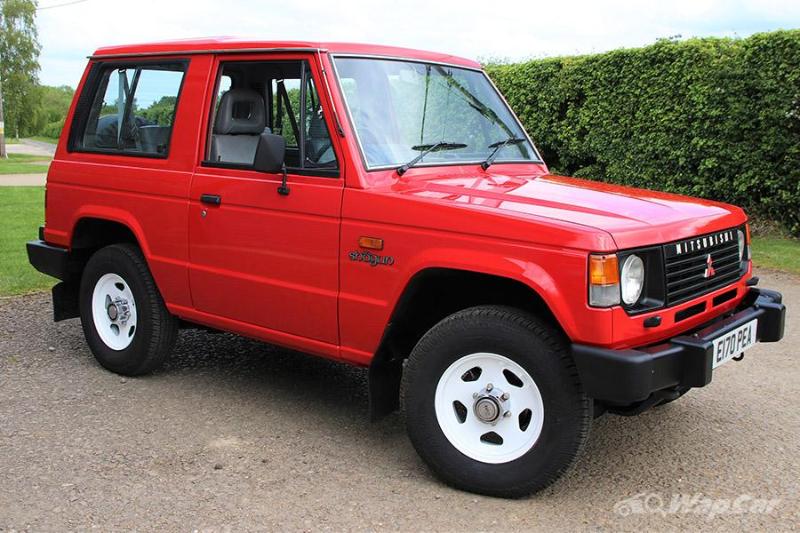 As such, the Pajero was called the Montero in Spanish-speaking countries. Meanwhile, in the United Kingdom, the Pajero was badged as the Shogun. It’s a fitting name and one that could work in Malaysia since its chief rival, the Land Cruiser is nicknamed the ‘ninja’ in East Malaysia. 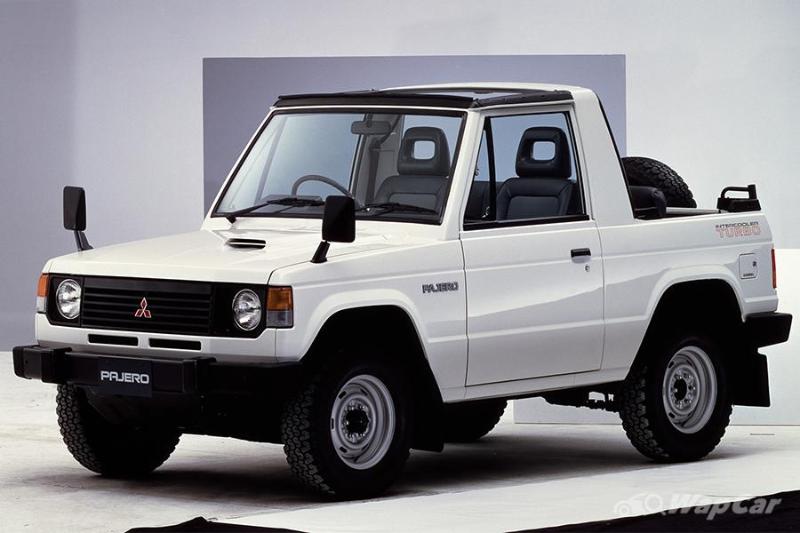 The production version of the Pajero was launched at the 1981 Tokyo Motor Show and initially, it was only offered with a 3-door short-wheelbase model with either a metal or canvas top. 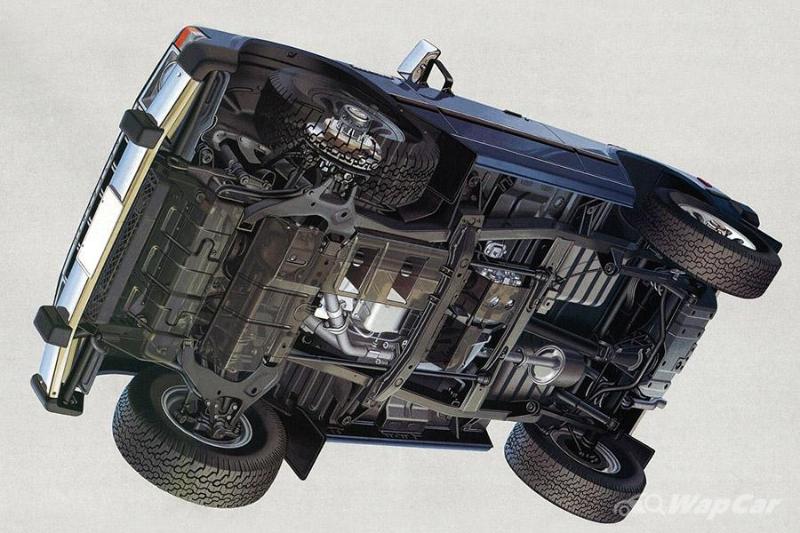 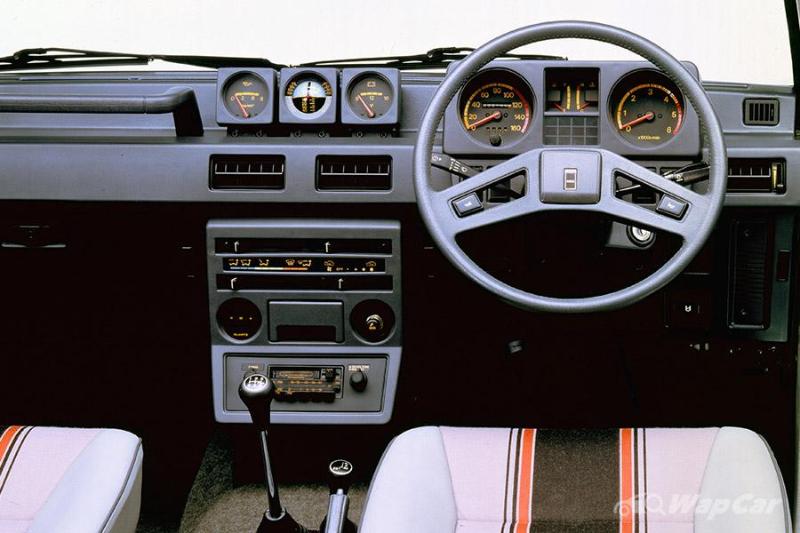 However, it wasn’t just the engineering innovations that kept the Pajero more unique than its rivals. It came with luxury amenities including power steering, air-conditioning, and suspension seats. 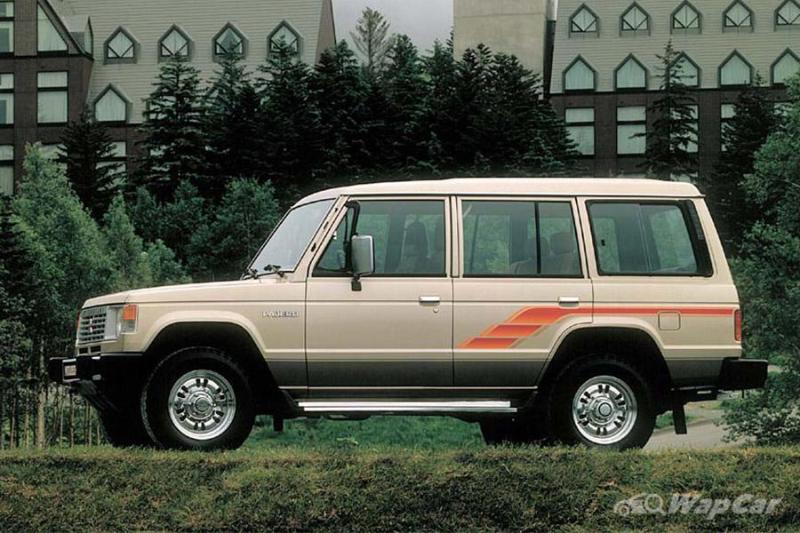 Then in 1983, Mitsubishi expanded the Pajero line-up by featuring a long-wheelbase (LWB) five-door model. This was also called the Pajero Wagon and it came with two engine options, a 2.0-litre turbocharged petrol engine, and a 2.3-litre turbodiesel engine. 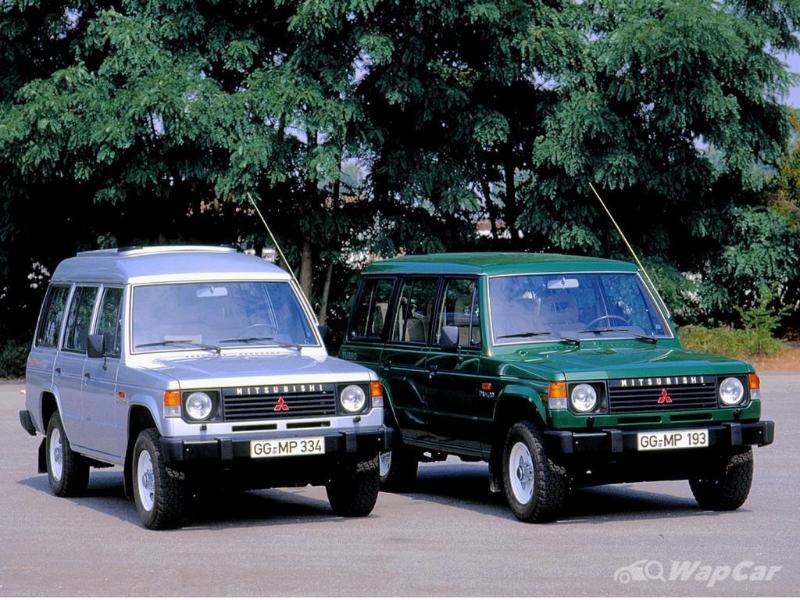 This came with three body styles, the Standard, Semi-High Roof, and High Roof. The LWB Pajero came with even more features like a high-end audio system with a built-in power amplifier and leather upholstery. 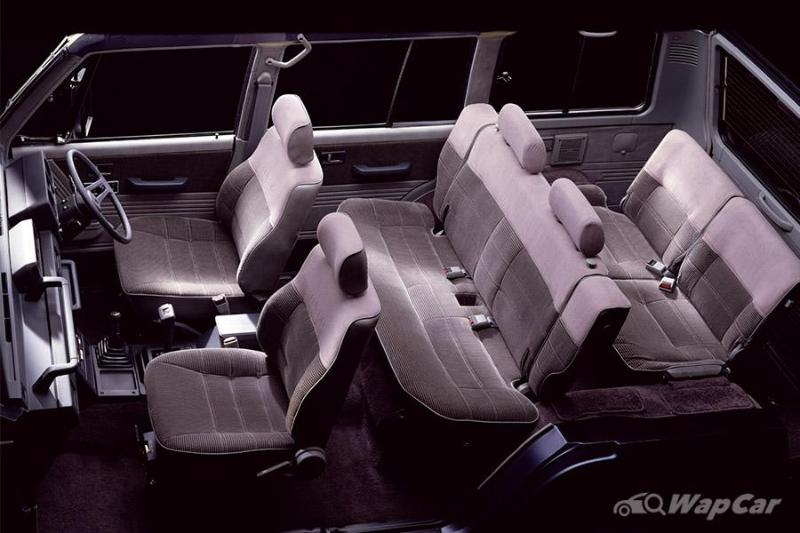 Even more unique for the LWB Pajero was the space and practicality. The LWB came with a 7-seat configuration and the third-row seats could be folded to the sides for additional boot space or combined with the second-row to form a bed. 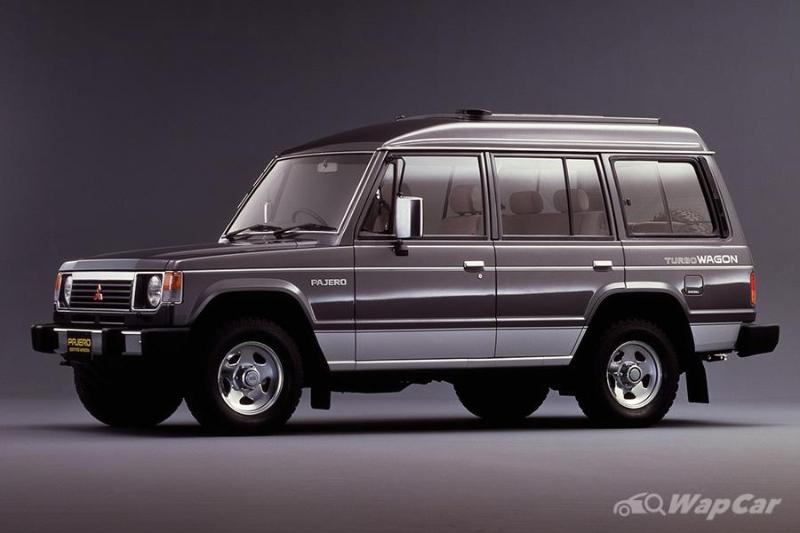 Then there’s the Semi-High Roof and High Roof body styles which gave rear passengers better headroom. Forget being a 4x4 SUV, the first-gen Pajero might actually be more of an MPV than some of the early MPVs at the time. 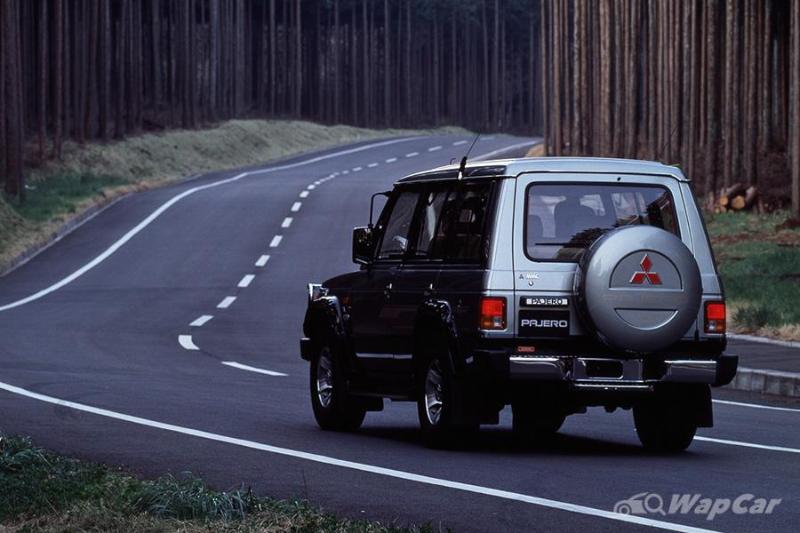 In 1984, the Pajero was updated to feature disc brakes on all 4 wheels to give better braking performance. A year later, a 4-speed automatic transmission was added to the turbodiesel engine variants. 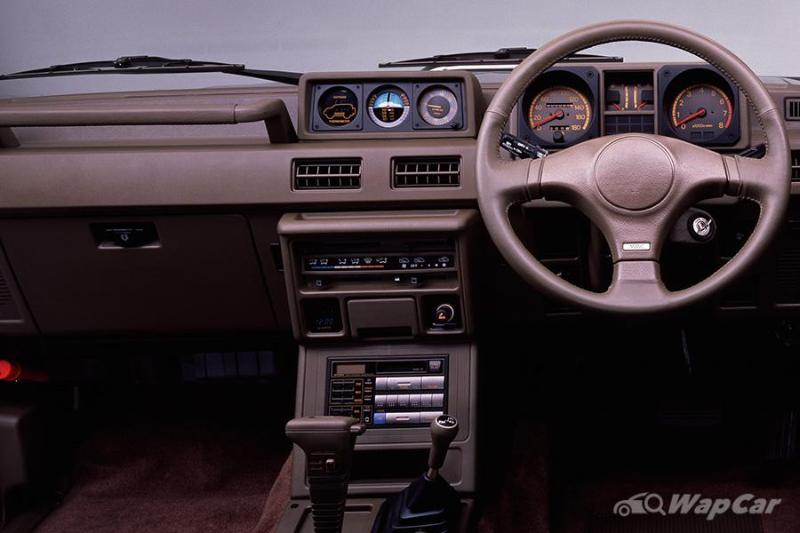 In 1987, a flagship model was introduced, noted by a two-tone paint job that will become a sort of Pajero trademark. It came with heated front seats, wool seat covers, leather headrests, and a 3-spoke steering wheel. 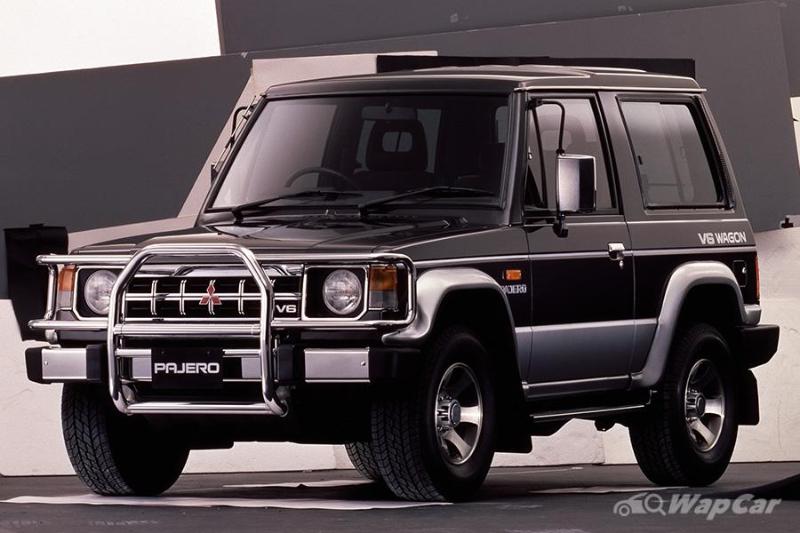 Then in 1988, the Pajero was given a couple more powerful engines – a 2.5-litre 4D56 intercooled turbodiesel engine and a 3.0-litre 6G72 V6 engine, the latter saw some success in Malaysia. Also added to the LWB models was a coil link suspension system which gave the Pajero a more comfortable ride and better off-road capability.

Despite being a largely more comfort-oriented 4x4 at the time compared to rivals, the Pajero was definitely not a slacker when it came to its off-roading abilities. It took part in various off-roading challenges including the Australasian Safari, the Northern Forest in Russia, and the Camel Trophy.

But none of those compare to its legendary record at the infamous Paris Dakar rally. In 1983, a year after the Pajero officially went on sale, Mitsubishi took part in the grueling rally. The Pajero failed to take a podium finish but it was a good beginning. 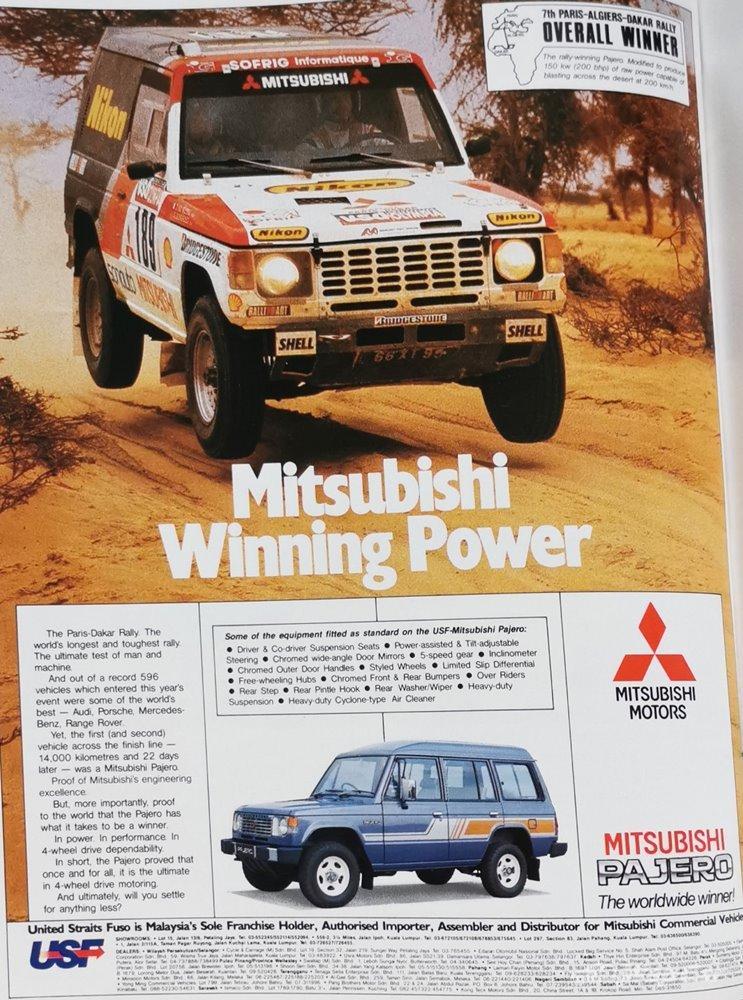 A year later, Mitsubishi took third place overall but then things started to turn for the best as the team went on to win the Dakar Rally in 1985, which was only their third attempt. 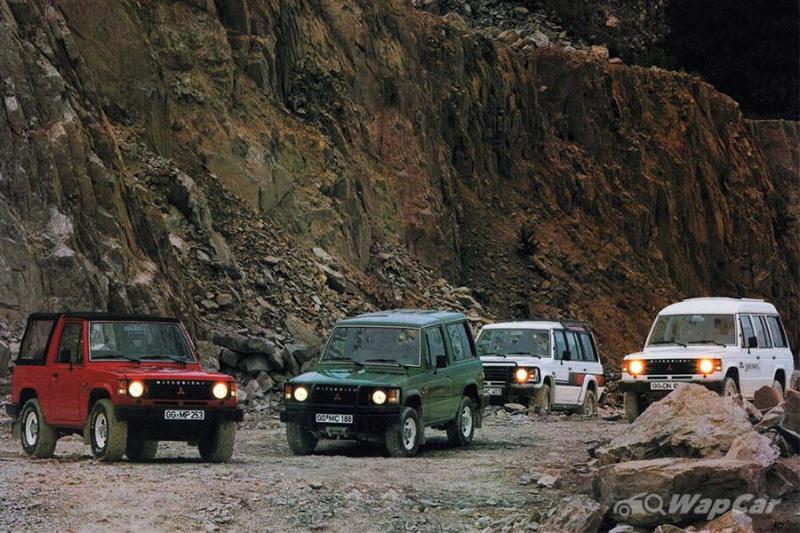 The original Pajero lived up to its reputation and would soldier on until 1991 when it was replaced by the second-generation Pajero. However, by that time, it has taken over the world, setting up a standard for the modern off-roader. 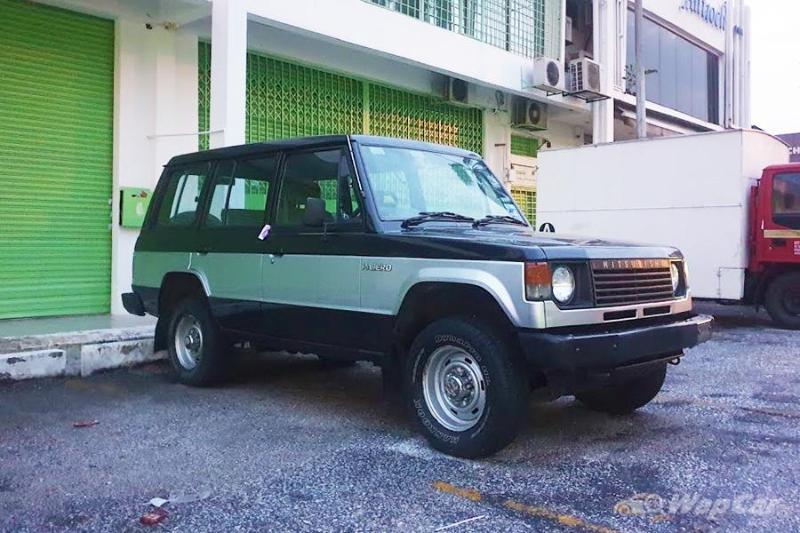 It was capable in off-road competitions, a reliable machine considering many are still seen around the world including Malaysia, and was a pioneer to the modern SUV that most people came to embrace today.