Home > News > Pros and Cons: Honda CR-V - Spacious and practical, but is it enough?

Pros and Cons: Honda CR-V - Spacious and practical, but is it enough? 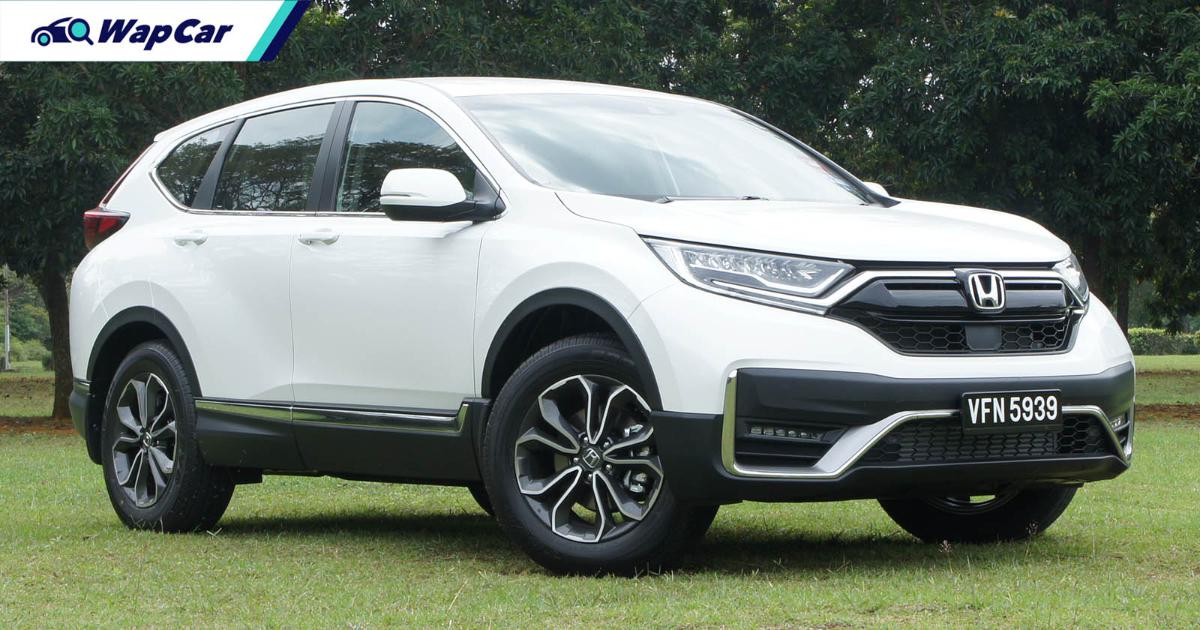 Some cars become so synonymous within its segment, that more often than not, the segment gets named after it. That applies even in a Malaysian context. Trucks? Toyota Hilux. Hot hatch? VW Golf GTI. Mid-size SUV? That would be the Honda CR-V. This is the model that started the whole 'soft-roader' trend, and the beginning of the SUV movement.

It's no understatement to say that the Honda CR-V has been a runaway success since its first generation. Now in its fifth generation, what makes the Honda CR-V such a compelling product? Pros and cons time? You bet. Here's a quick summary: 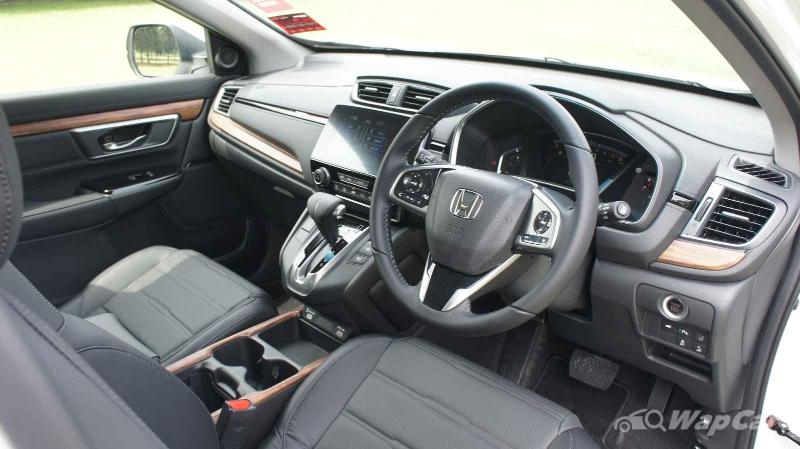 For a car that will mainly be a family load-lugger, you will find very little to complain about inside in terms of space. Headroom? Plenty. Legroom? Cavernous. Seats are well-designed and supportive. Interior ergonomics are also pretty much idiot-proof. In terms of space and practicality, it makes its rivals feel one segment smaller.

It's not just the numbers that make it great, but the thought that has gone into it. The rear hatch (which now features hands-free opening) aperture is humongous, and have you seen that deep pocket in the front center console? It can fit a women's handbag. And we all know, a women's handbag has everything you need. 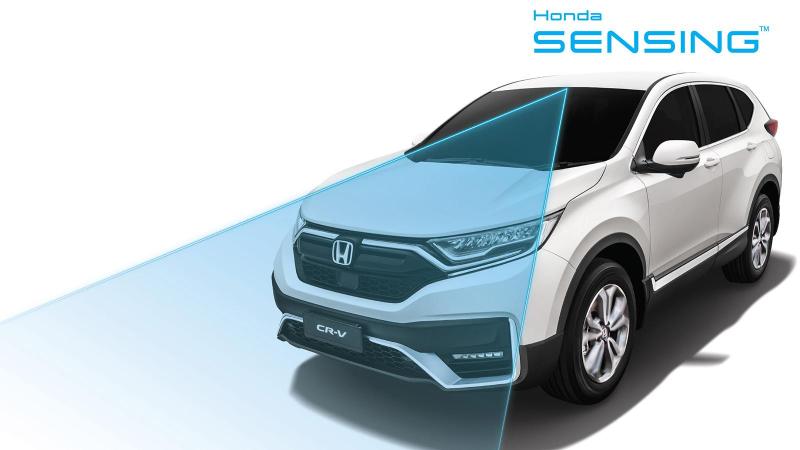 It's all good that Honda throws in its Sensing ADAS suite for your money. I mean, who even uses it? This is where you're wrong. The CR-V's execution of Honda Sensing is as good as it can get in real-world driving (no ADAS is flawless, none). If you have never tried Adaptive Cruise Control (ACC) with Low-Speed Follow in the CR-V, then you're missing out on one of humankind's great innovations. It's so good it deserves a big mention here.

The way ACC helps you crawl in traffic makes life much less taxing for the driver (but please remember it's there to assist, not drive for you). Everything happens seamlessly and naturally, so much so, your passengers won't be a able to tell the difference. That level of calibration comes with meticulous testing and does not happen by accident. 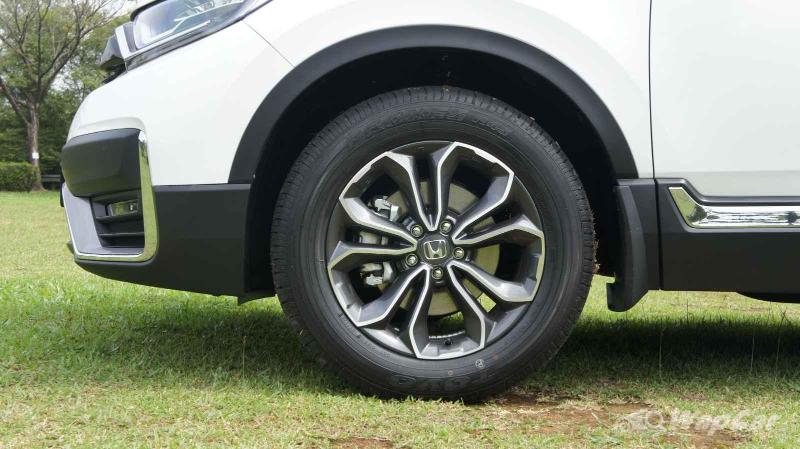 Ride comfort is another aspect that has been given an upgrade in the facelift model. We did find the earlier model to have a soft yet slightly crashy ride quality, which was at odds with the CR-V's brief of a comfortable, runabout vehicle. 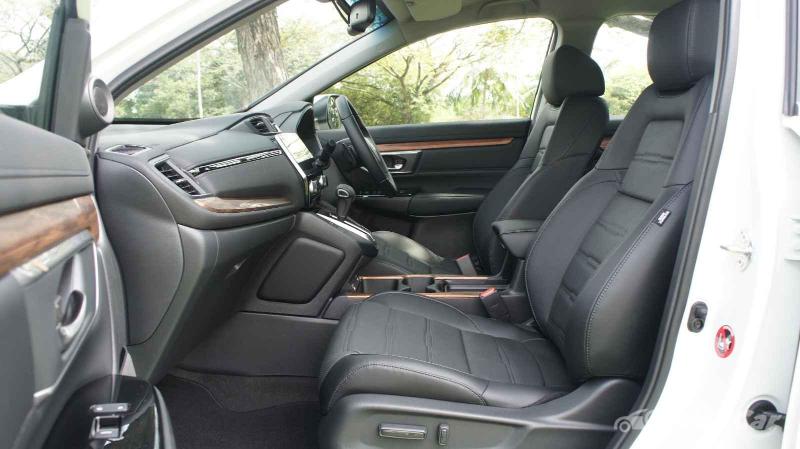 We're happy to report that, the facelift model has addressed this issue. As a result, ride comfort is significantly improved. Also noteworthy is the addition of Active Noise Cancellelation (ANC). It works by filtering out frequencies that our ears are most sensitive to. None of its rivals employ such a technology to make your journeys more comfortable. 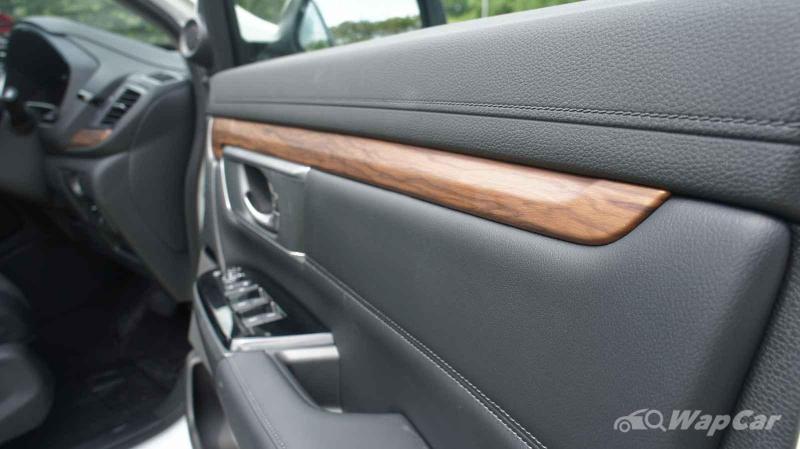 While we rave about the CR-V's interior packaging - and rightly so - the cabin materials inside aren't quite up to scratch. Don't get me wrong, it's not terribly bad. It's just that its main rival, the Mazda CX-5, sets such a high bar that it makes the CR-V's interior look a bit low-rent.

Major touchpoints in the cabin feel a little.... brittle. Turning the knobs and pressing the switches return a slightly hollow and imprecise feeling. That's before I even touch on the wood inserts and faux-stitching. 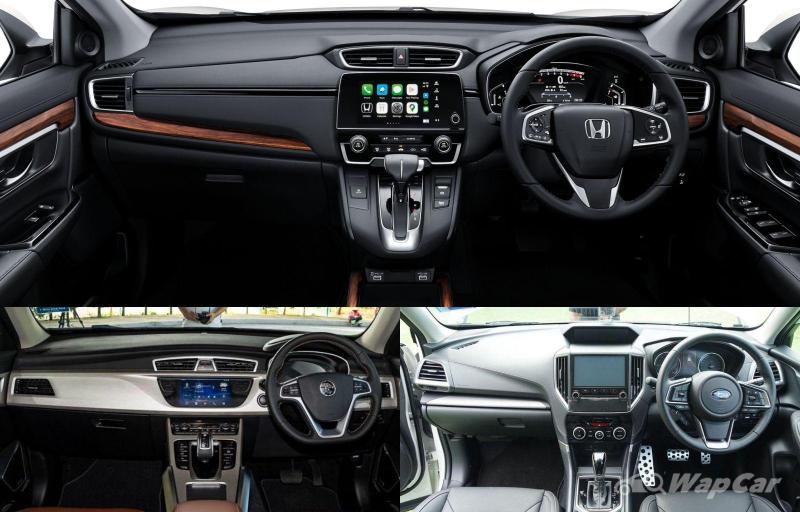 Even discounting the CX-5, rivals like the Proton X70 or Subaru Forester have an honesty in the way they go about business. Even if their interiors are not the most premium, they don't pretend to be something they're not. You get the feeling that the CR-V is trying too hard, and ends up looking a bit contrived. 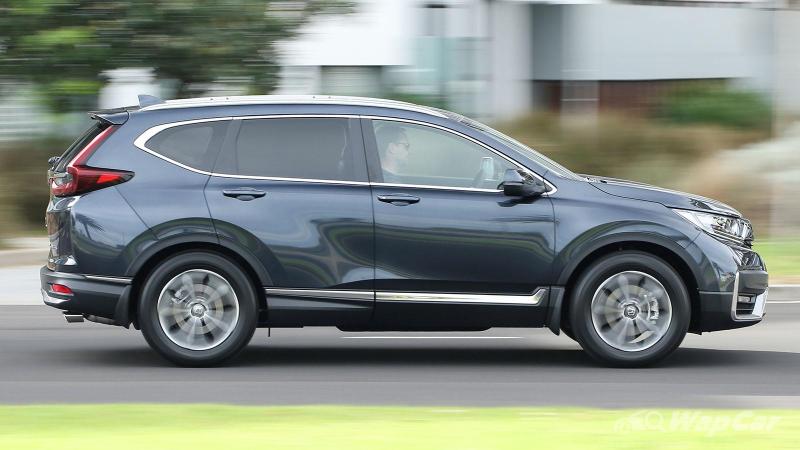 For all the improvements it made in ride comfort, the CR-V lacks the cruising calmness that the Subaru Forester possesses (surprising, I know). In fact, in its segment, the Toyota RAV4, Mazda CX-5, and Proton X70 have better high-speed road manners than the Honda CR-V. 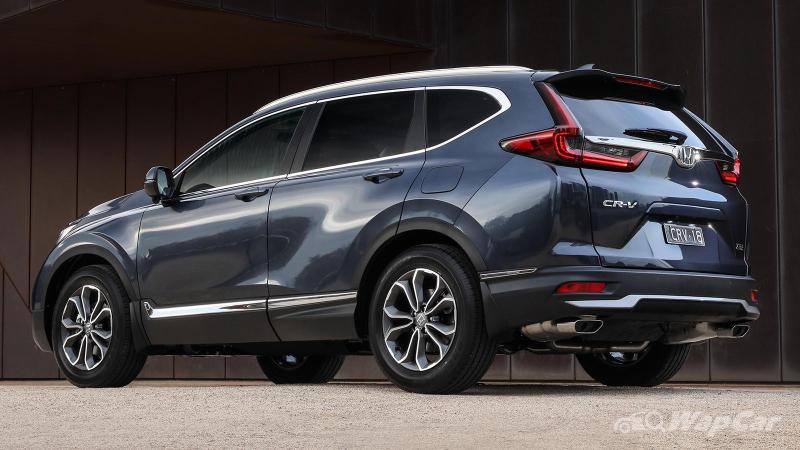 In urban driving, this isn't something you'd notice. It's when going above the national speed limit that it becomes more apparent. The CR-V exhibits a slightly nervous feeling that dents confidence a little, compared to its rivals. Due to the CR-V's sheer size, handling also takes a back seat. Even by SUV standards, the CR-V does not like being asked to throw its weight around.

Con - Not the prettiest exterior 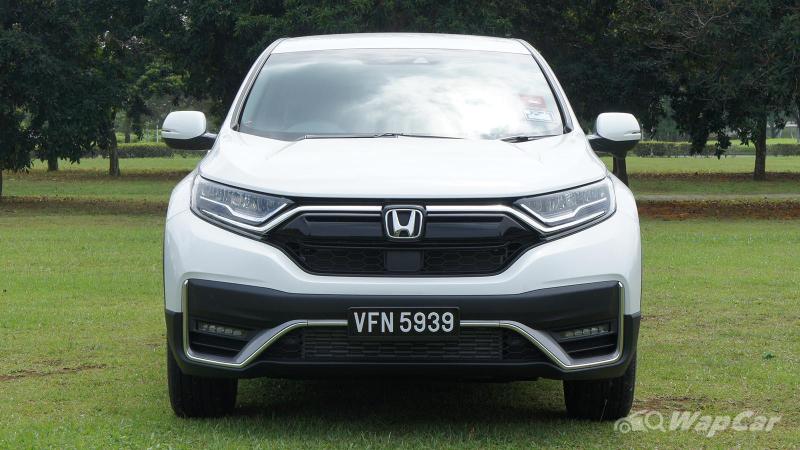 Now I know that looks are always going to be a subjective matter, but you'd be hard-pressed to call the Honda CR-V a pretty car. It's far from ugly, but from most angles, it does look a bit bulbous and clumsy, no matter what colour you specify. At the very least, you won't mistake it for anything else on the road. 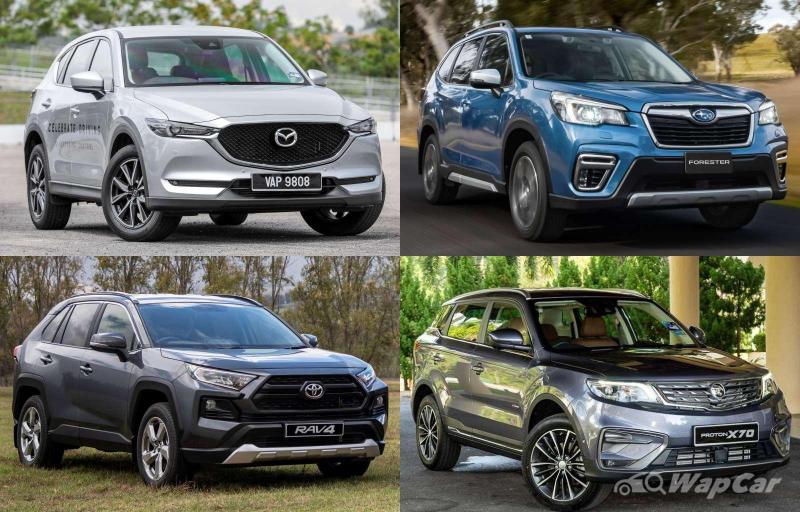 Park the CR-V next to its rivals, the Mazda CX-5 instantly looks more expensive and svelte while the Proton X70 boasts clean and understated lines. Even the Toyota RAV4 and Subaru Forester have this refreshing ruggedness to their exterior designs. In the end, the CR-V gets caught between trying to look sophisticated and tough, but this results in the car looking a tad frumpy. 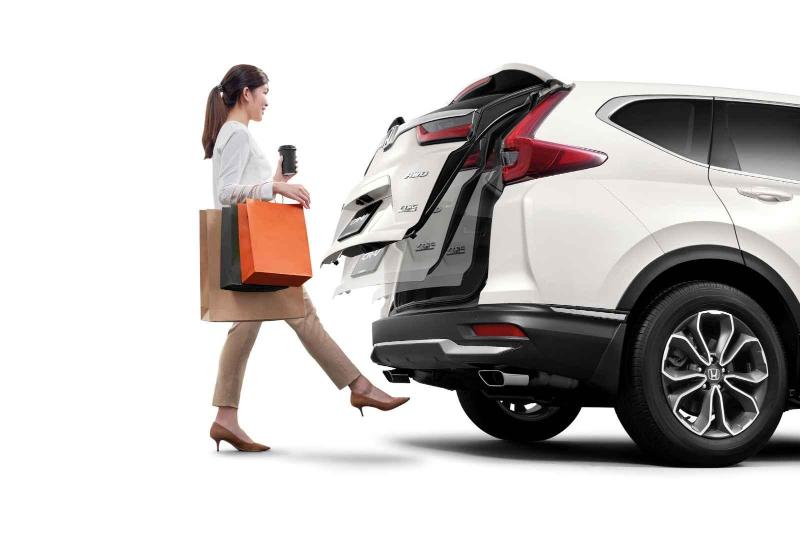 Even in the face of newer, and even better-looking opponents, the Honda CR-V remains a steadfast and strong contender in its segment. It's not hard to see why. Buyers in this segment prioritise comfort, practicality, space and ease of use. These are things that the Honda CR-V has in spades. 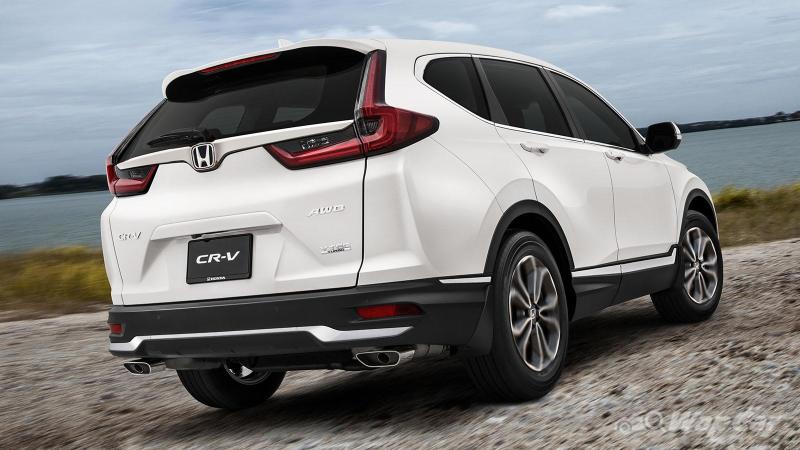 So, while it will not win any beauty contests, or doesn't feel the most expensive inside, The Honda CR-V nails its core purpose with consummate ease. You can call it whatever you want, but there's no denying that most of what the Honda CR-V sets out to do, it does so in a crushingly competent way. After all, sales numbers do not lie. It is still the best-selling non-national SUV in its class.