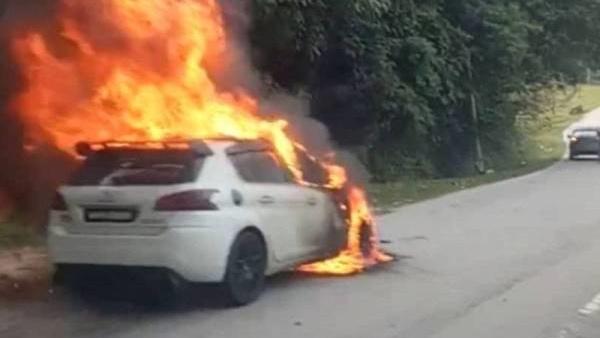 Nasim Sdn Bhd, the official distributor of the Peugeot brand has released a statement regarding the viral news stories of a burning Peugeot along Rawang.

“(The distributor) has verified in its customer service records that the vehicle involved underwent various modifications including engine overhaul carried out by the car owner at service centres which are not authorised by Peugeot Malaysia.”

Nasim also went on to encourage Peugeot owners to only seek service and maintenance from authorised Peugeot service centres.

It is common practice that any modification or adaptations made to a vehicle will result in the service centre’s right to forfeit the warranty that comes with all new cars.

Hence Nasim is urging owners to return to official centres to get the best performance and safety of their Peugeots.

The owner reportedly heard an explosion from the engine while driving before stopping at the side of the road to investigate the sound.

According to the news reports from Sinar Harian and Metro Harian, the owner got out of the car just in time as the car caught fire the moment it came to a standstill.

Fire rescue arrived 20 minutes after the fire started and successfully put out the fire. Nobody was hurt in the process.