Review: Here's what the Thai media says of the 2021 Honda City Hatchback 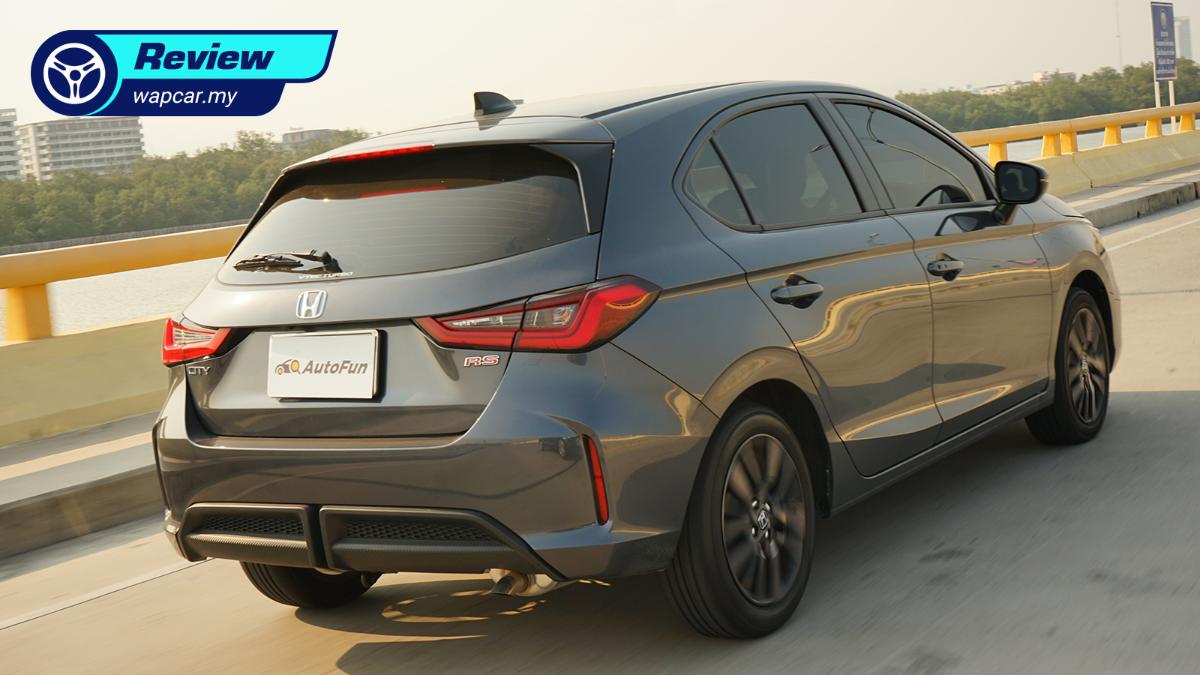 The 2021 Honda City Hatchback is coming to Malaysia, and news of it superseding the Honda Jazz has drawn rather mixed reactions. Some lament the Jazz's departure from this region, but our colleagues over at AutoFun Thailand think that the City Hatchback is a worthy successor.

There's three variants of the City Hatchback in the Land of Smiles - S+, SV, and as tested is this range-topping RS variant.

In RS guise, the City Hatchback gets a multi-piece exterior package encapsulating a front lip and rear diffuser with carbon-fibre-like detailing, rear spoiler, 16-inch wheels (15-inches on the S+ and SV), and gloss black accents in place of chrome ones found on other variants. 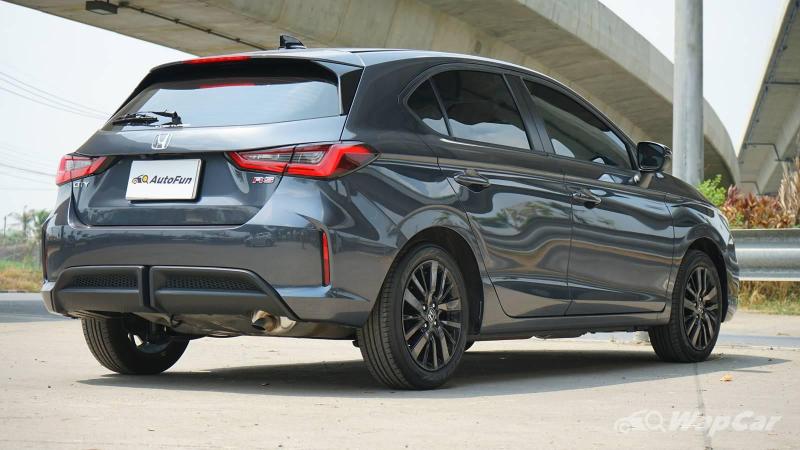 Looks aside, let's get the elephant in the room out of the way - its size. Here's how it matches up against the Thai-spec Honda City sedan: 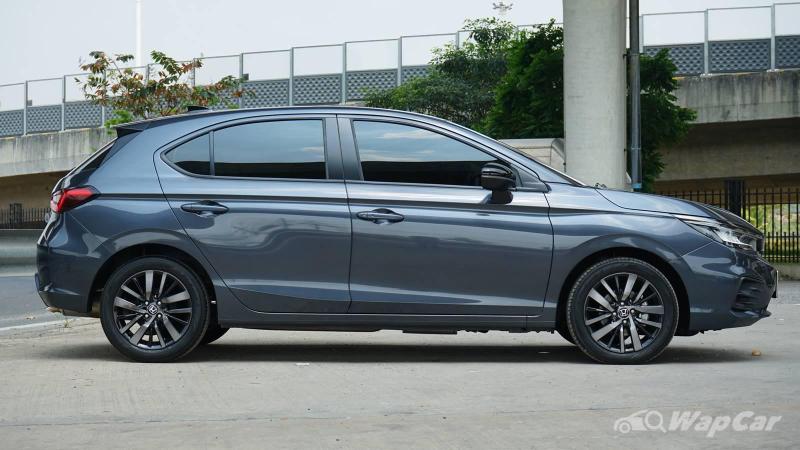 By virtue of being a hatchback, it's a little shorter and marginally taller than the regular three-box design City. The higher roofline meanwhile is not without its benefits as we'll explain further below.

While it's a little shorter and taller, the width is unchanged from the regular City sedan. Good news then, because it isn't a squeeze in there. 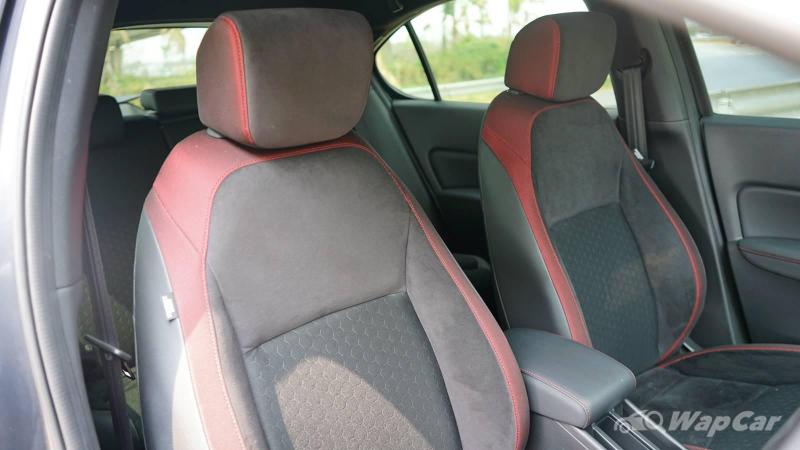 In terms of fit and finish, AutoFun says that the City Hatchback is just on par with competitors over there, the Mazda 2 and Toyota Yaris. Cabin materials is what you'd expect from this budget-concious segment, passable but nothing extraordinary.

Seeing that this is the RS variant however, there are a few niceties to boot:

AutoFun's reviewer, Danai, says that the seats feel rather comfortable. The materials are plush, they offer good support, and certainly better than what one would expect from budget cars. 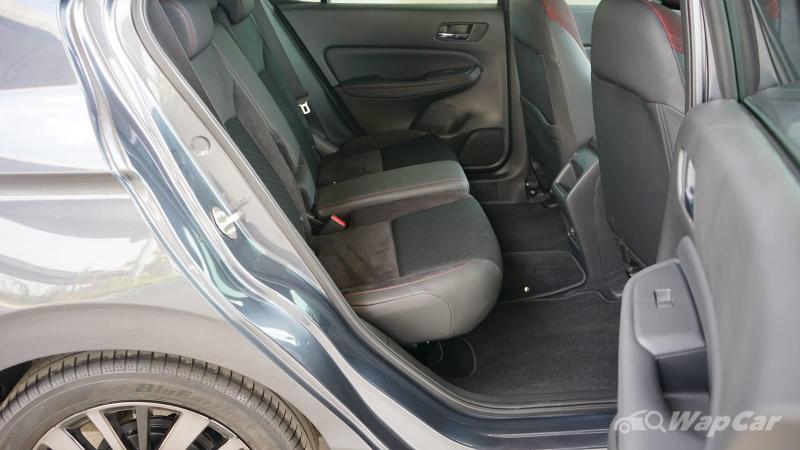 Interestingly, the arrangement of the rear seats are a little higher than the front pair, lending passengers better visibility. That said, Danai maintains that the cabin isn't as airy as it is in the Jazz.

Speaking of seats, the much-lauded Ultra Seats (renamed as ULTR Seats here) from the Jazz are standard fitments in the City Hatchback range.

And there's your answer on why the roof of the City Hatchback is taller than the sedan's - it's so that the cabin can offer reasonably useful space with the rear seats folded up in Tall Mode configuration. 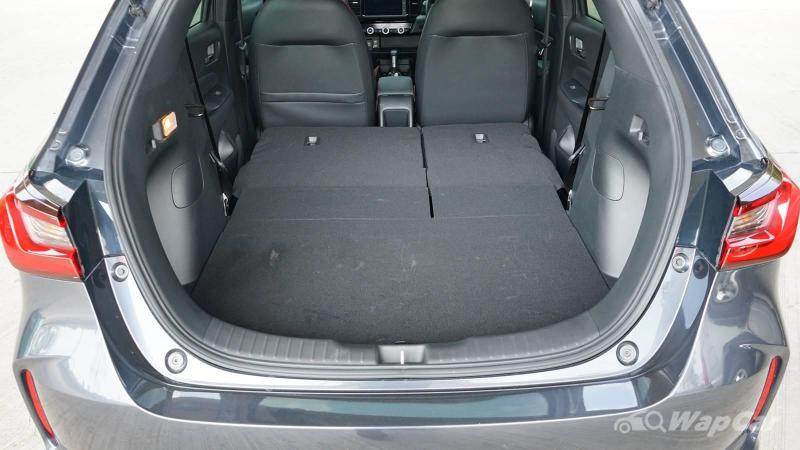 Other than that, the City Hatchback RS gets 6 airbags, a reverse camera, and the regular set of safety features like anti-lock braking system with electronic brakeforce distribution (ABS, EBD), vehicle stability assist (VSA), and hill start assist (HSA). 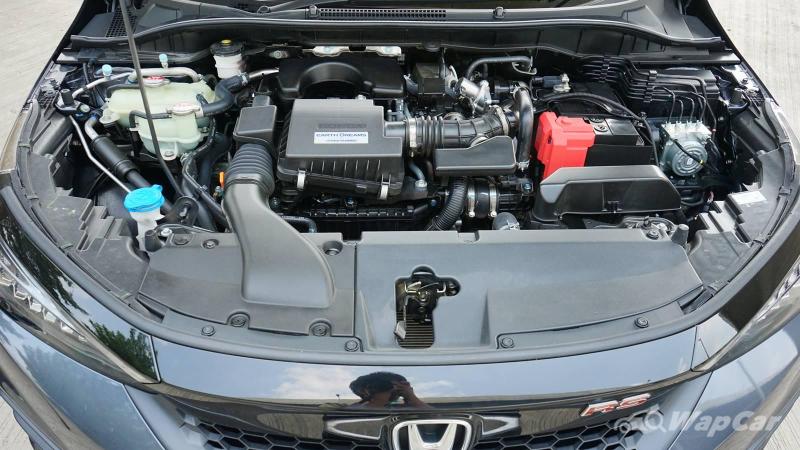 The Thai-spec City Hatchback comes with a smaller engine that's built to comply with the country's stringent EcoCar regulations.

AutoFun found the engine to be adequately powerful, praising its sharp throttle response that actually made them "forget the Honda Jazz". 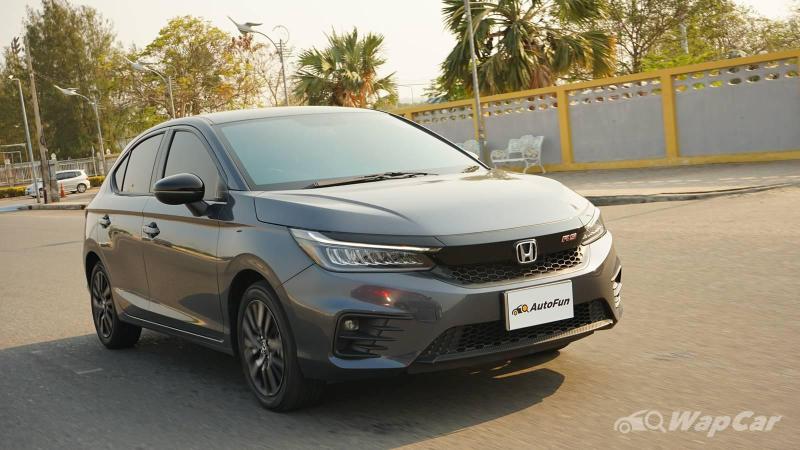 In their driving tests (taking place mainly in the city), the City Hatchback returned a fuel consumption figure of around 8.6 litres/100km, which is moderately thirsty for a car in this category. 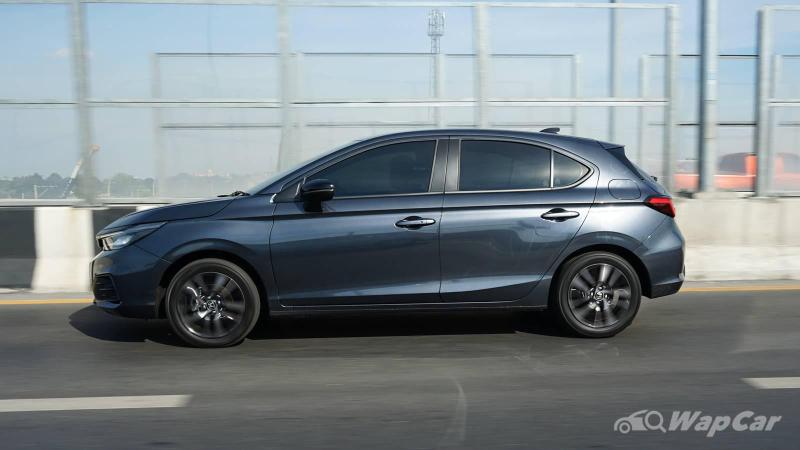 Having said that, this isn't the engine that we'll be receiving. Remember that Thailand offers tax deductions for low C02 emissions engines such as this, and without it, the engine is much too expensive for developing markets in this region.

Our City Hatchback will have its powertrain ported over from the sedan: a 1.5-litre, naturally-aspirated mill pushing 122 PS and 145 Nm, combined to a CVT. Same story in Indonesia. 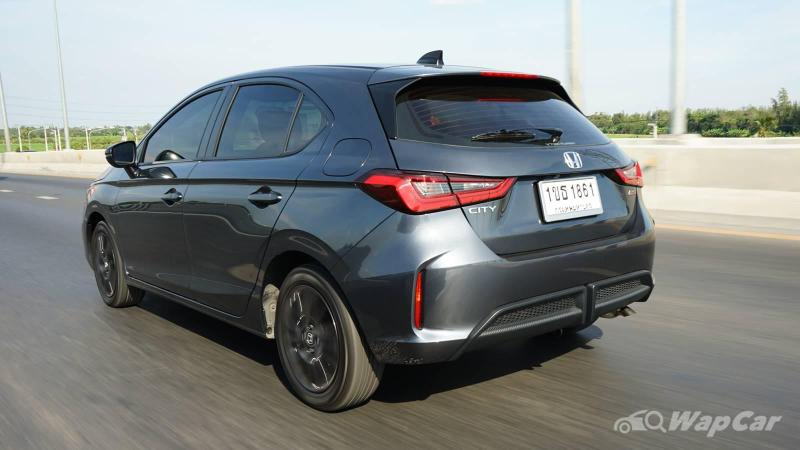 Powertrain aside, AutoFun reports that the City Hatchback drives pretty much the same as the City sedan with its European-like handling. The car certainly isn't jumpy, and it handles pockmarked roads pretty well.

Also read: If disc brakes are better, why do modern cars still have drum brakes?

Conclusion - a rather good car 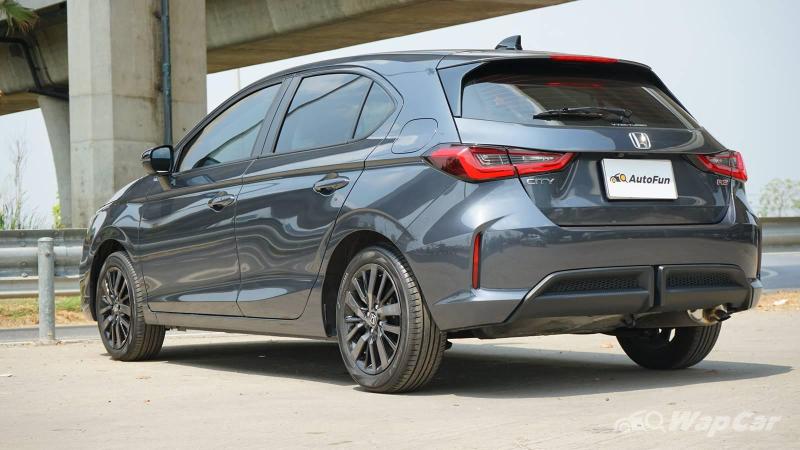 When the truth's been told, AutoFun thinks that the City Hatchback is a recommendable car, with a practical interior wrapped up in a rather sporty exterior. Their main gripe with it is its lack of advanced driver assistance system (ADAS) features, and a rather thirsty engine.

Also read: Has the 2021 Honda City Hatchback already won the cool factor against the Yaris? 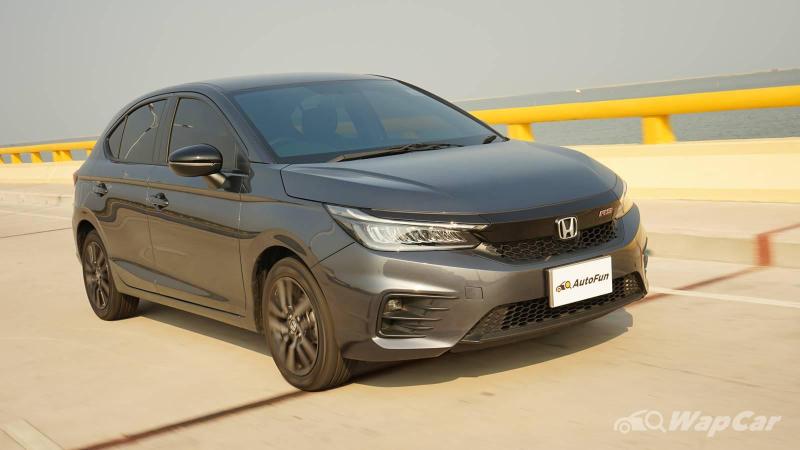 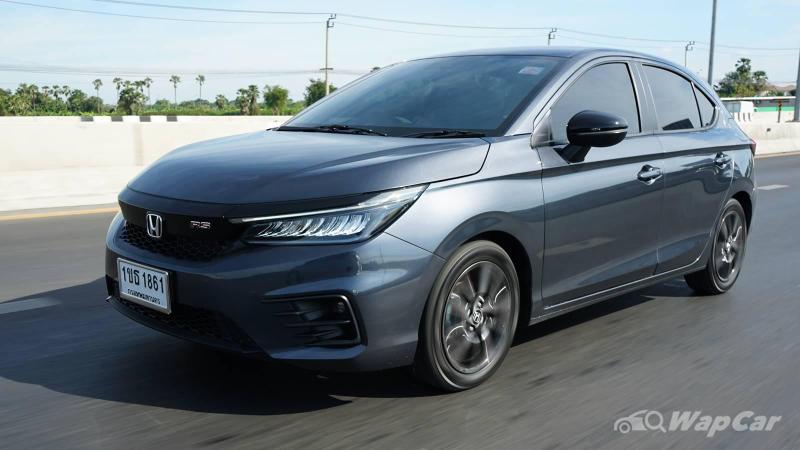 As for when it's coming, expect it to come to our shores sometime in late-2021, taking into account lead time for local parts sourcing and assembly.