Home > News > While we wait for the Mitsubishi Triton Athlete, let's pay respect to its forefathers

While we wait for the Mitsubishi Triton Athlete, let's pay respect to its forefathers 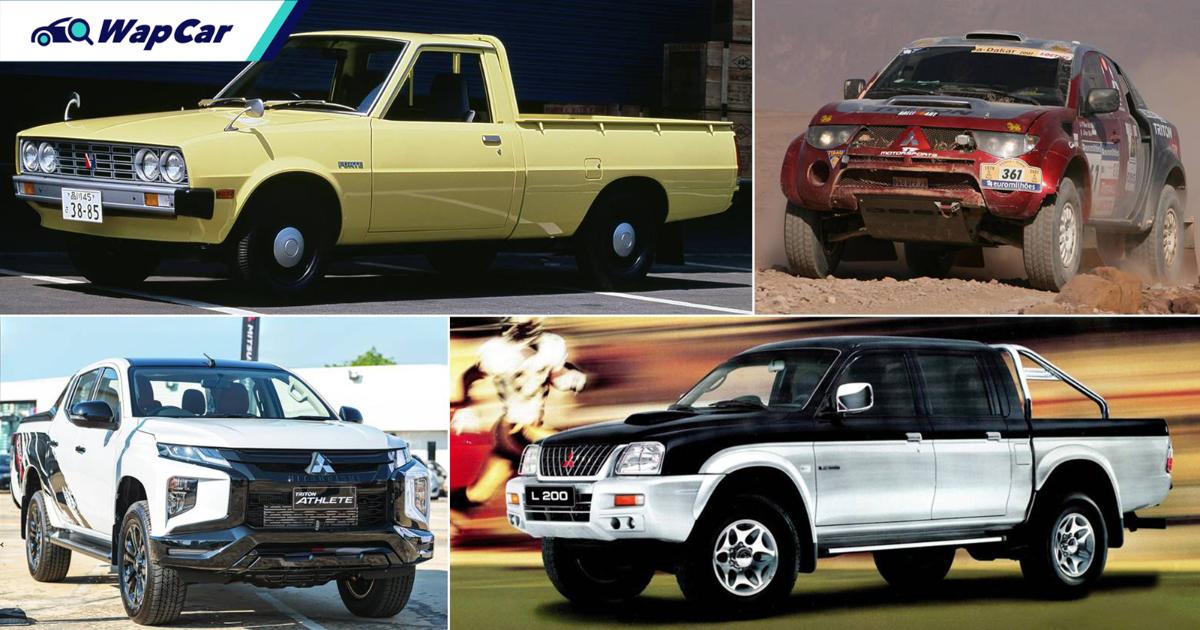 Speak of Mitsubishi, and voices will come out of nowhere, boohooing about the fate of the Lancer Evolution and Eclipse nameplates. But to just confine the storied Japanese carmaker to just two models is to do them a disservice.

Which is why we're looking at their pick-up truck history today, one that started 40-plus years ago and has since culminated in the capable Mitsubishi Triton. 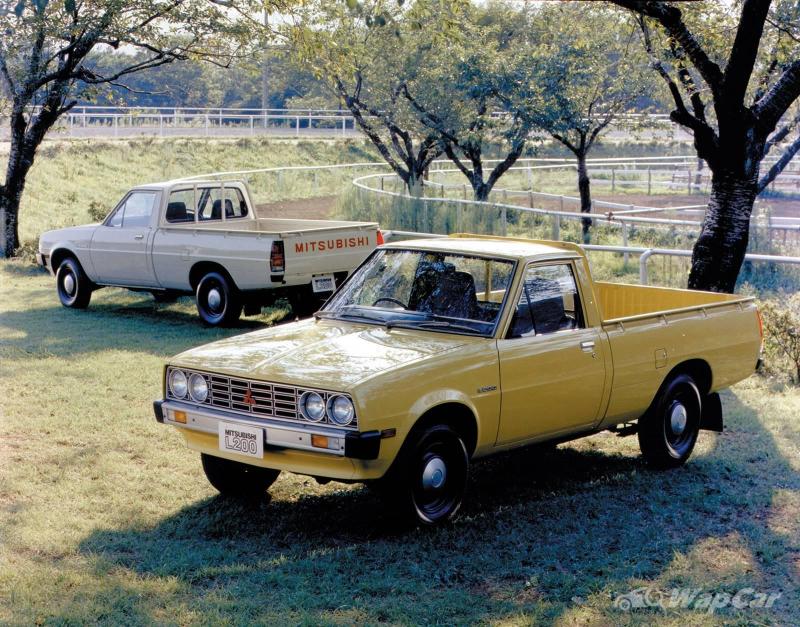 Things started simple for Mitsubishi, heck even the name is just that - the Americans simply knew it as the Mitsubishi Truck. In Japan, it was sold as the Forte and the rest of the world recognised it as the L200. 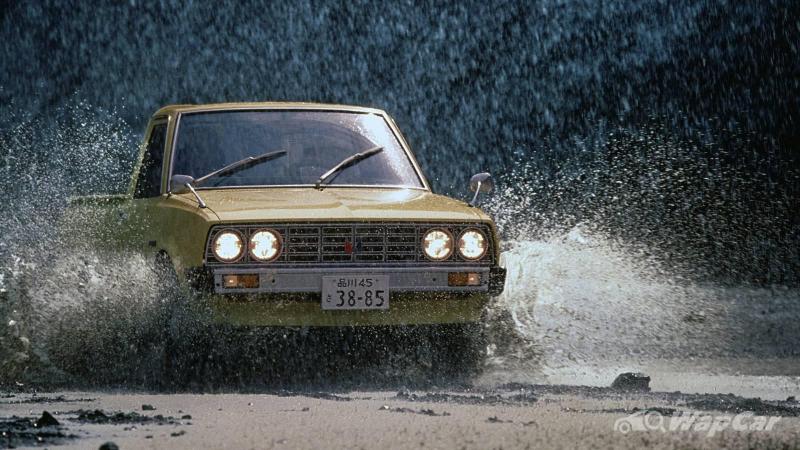 Produced in Ohe, Japan and Laem Chabang, Thailand, the Forte was purely a workhorse, only available with a single-cab body that was pulled along by a choice of three petrol engines or one diesel unit.

By 1980, part-time 4WD models were added to the range. It's commonplace now, but in its time Mitsubishi one-upped their peers in other ways. 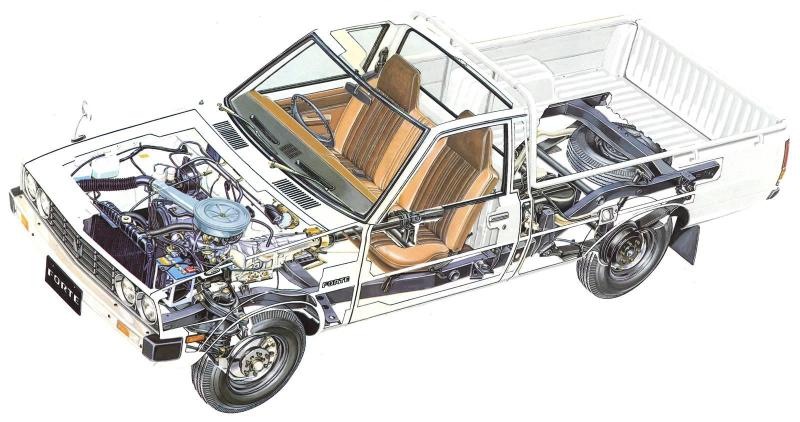 You see, prior to developing the Forte, Mitsubishi Motors honed their skills assembling the American Willys' Jeep and built several variants of the Jeep under the Mitsubishi brand. Fun fact: the 1982 Pajero superseded the Mitsubishi Jeep.

Also read: Why we shouldn't mourn the death of the Mitsubishi Pajero? 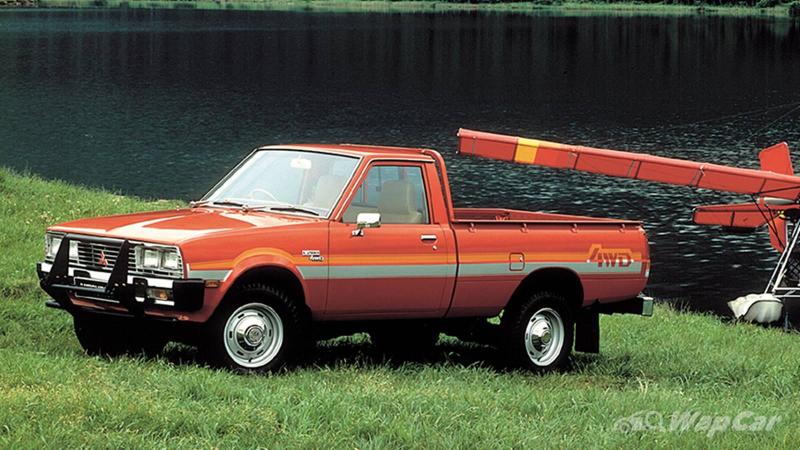 That experience left Mitsubishi with more than enough know-how in 4WD systems. This knowledge allowed them to design a quiet operation 4WD transfer system that not only delivered a more comfortable ride, but also allowed for higher-speed driving. 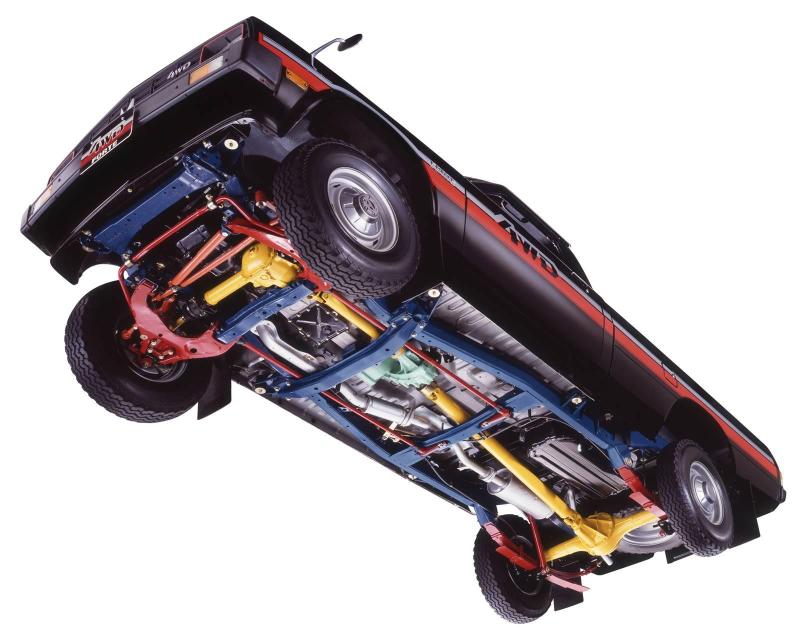 With that, this model was essentially the forefather of Mitsubishi Motors' 4WD lineup such as the Pajero and the Delica MPV. 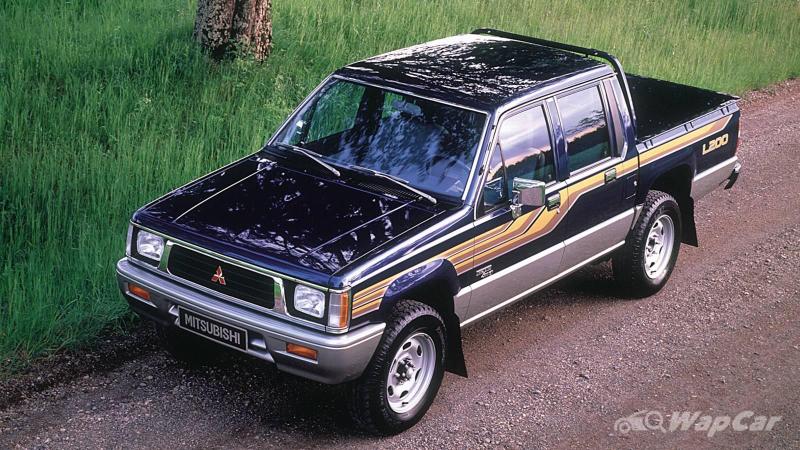 By 1986, Mitsubishi was already a household name in the pick-up truck business. In customers' eyes, it was an Asian alternative to the Land Rover. 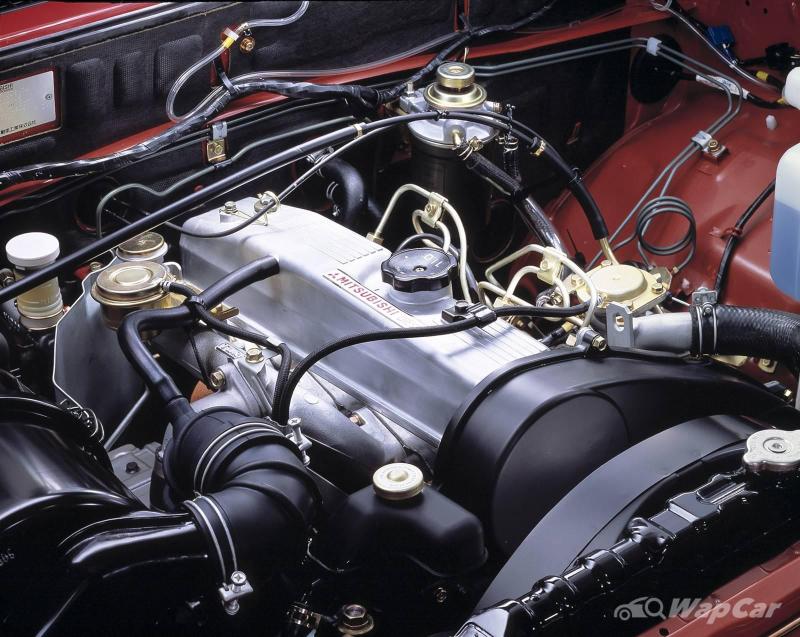 Engine sizes got bigger too, and by now Mitsubishi Motors now offers 2.0-litre and 2.6-litre petrol mills alongside a 2.5-litre diesel. 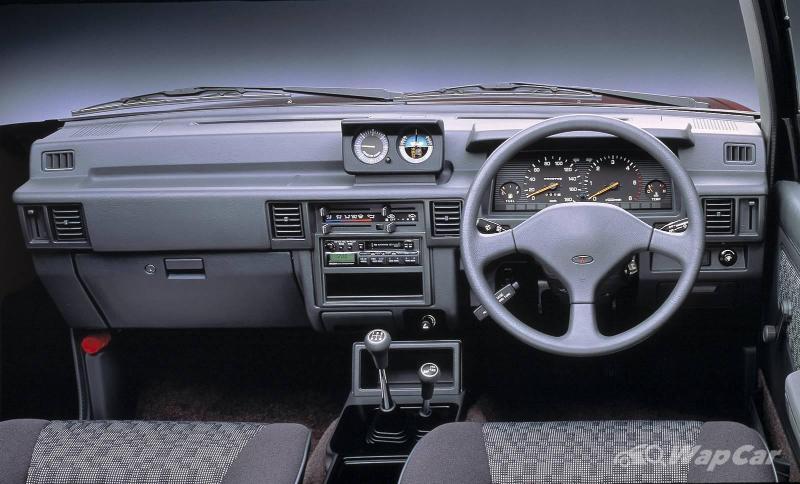 Technically it's the start of the Triton generation as well: that was the name of the L200 in Australia. The Forte name made way for Strada in Japan in 1991, and in North America it was known as the Mighty Max. Elsewhere, customers still knew it as the L200.

Oh and you'll get a kick out of this: it was also sold as the Dodge Ram 50 in the USA, as a result of Mitsubishi Motors' and Chrysler's partnerships. 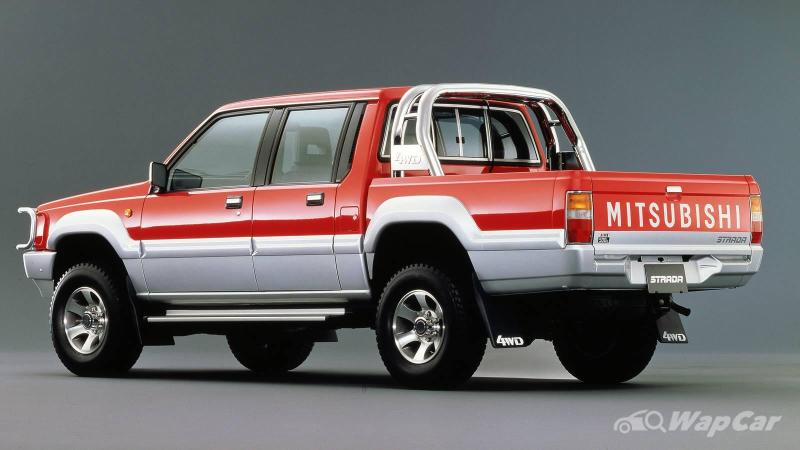 A total of approximately 1,146,000 2nd generation models were produced in the Ohe Plant in Japan and the Laem Chabang Plant in Thailand. 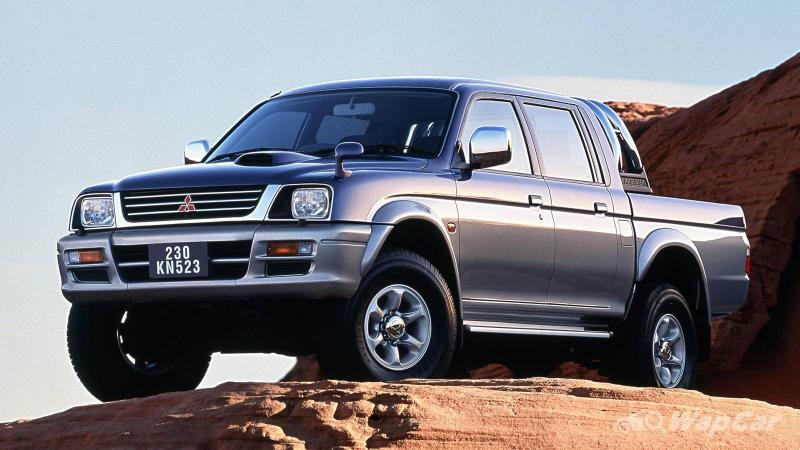 Customers' needs were changing and trucks were no longer confined to mud-filled days at the construction site. People are starting to look for something that also wouldn't look out of place in a mall and that's a need the third-generation L200 strived to cater. 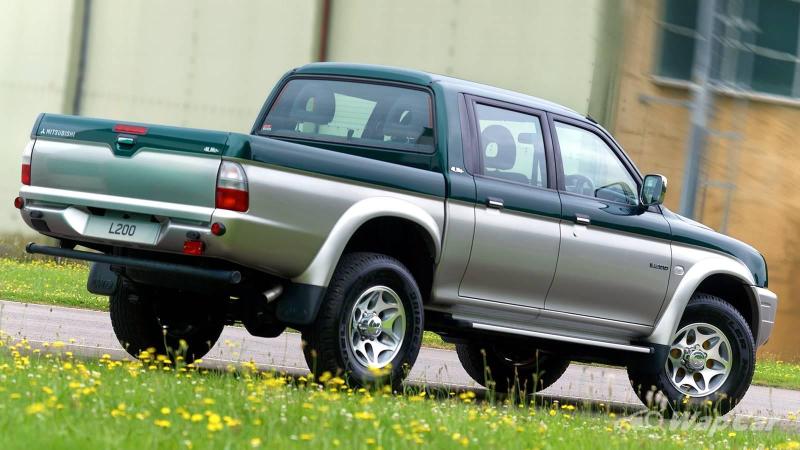 Introduced in 1995, the model was postioned as a roomy five-seater that was comfortable and capable enough for both recreational and commercial use - hence choice touches like oversized interior paddings, moulded door trimmings as well as signature dual-tone colourways. 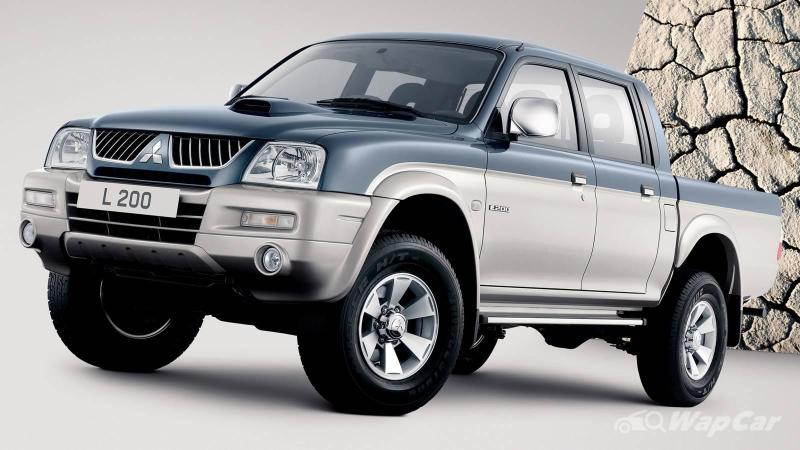 Malaysians will best remember it as the L200 Storm. Storm, however, wasn't an official name from Mitsubishi Motors but the then-distributor (USF-Hicom) branded it as such anyway. 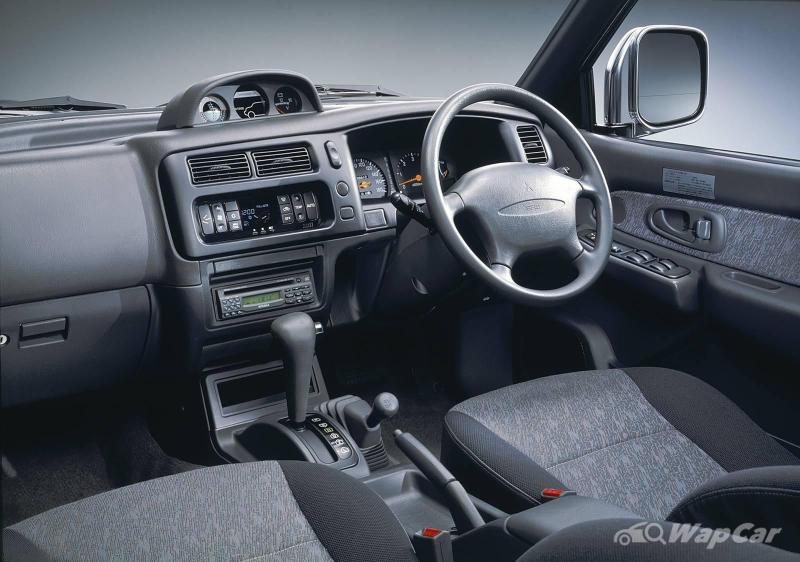 Upon its introduction on our shores in 2001, it had a couple of market firsts: first pick-up truck with an automatic transmission, and also the first Mitsubishi pick-up truck that was officially sold here.

The automatic transmission was unique (in its time) and customers loved it - shooting it up to the top of Malaysia's pick-up truck sales chart, at least until the 7th-generation Toyota Hilux came along.

New to this generation was a 2.5-litre turbodiesel mill and 'Easy Select 4WD', a feature that allowed for 2WD/4WD changes as and when needed. 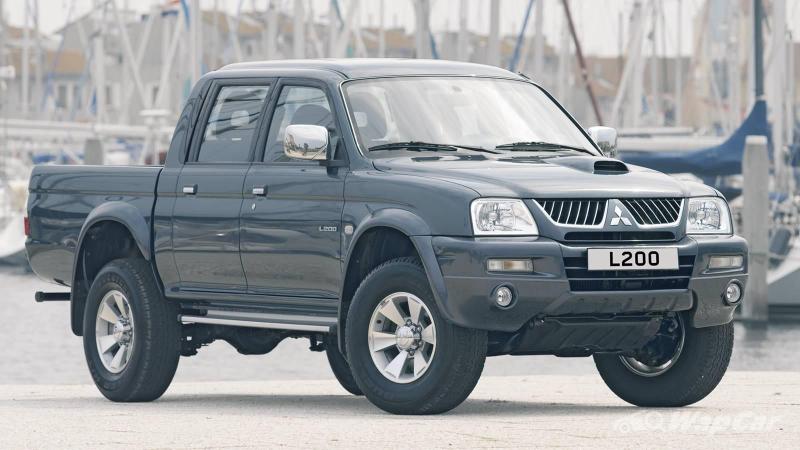 Production at the Ohe plant was transferred to Thailand's Laem Chabang, and the car was exported to Europe, Oceania, Latin America, the Middle East and Africa. 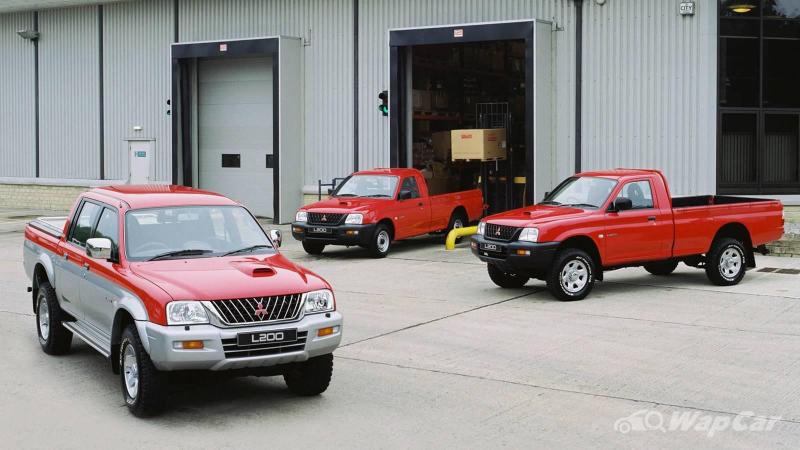 Total sales was slightly lower than its predecessor, at 1,046,000 units, a fact that owed to the Asian financial crisis.

The fourth-generation - best known as the 'Stormtrooper' truck - marked new beginnings for the Mitsubishi Motors brand in Malaysia as it was the first core model to be launched by the newly-formed Mitsubishi Motors Malaysia (MMM) in 2006. 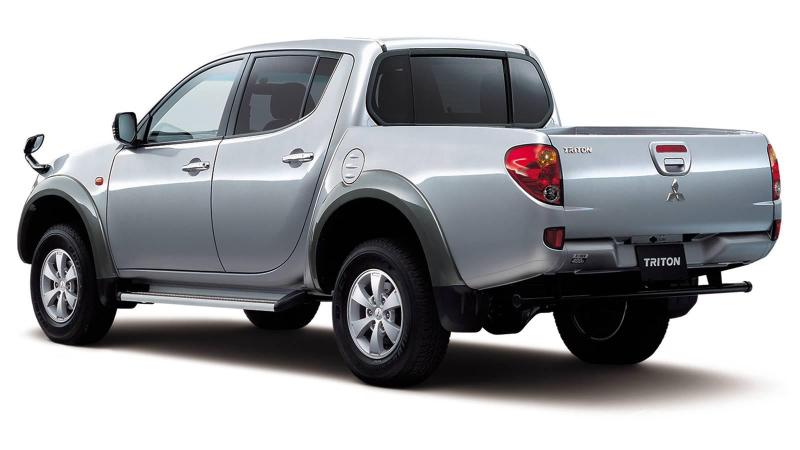 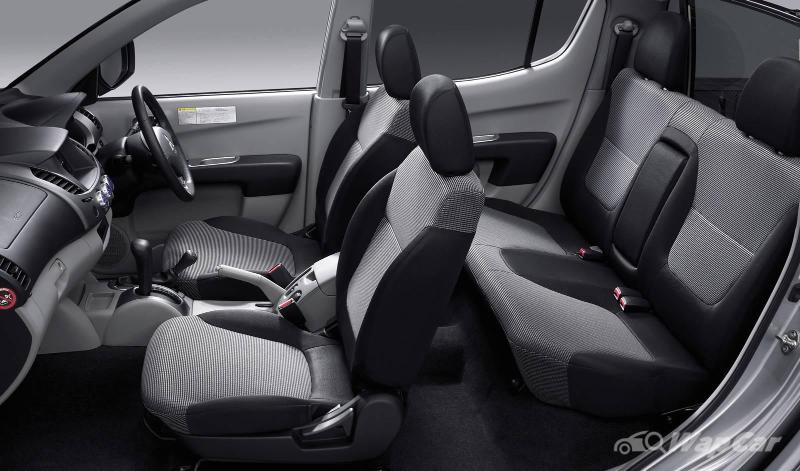 The signature 'J-line' curve at the cabin's rear section allowed the seats to be angled better, delivering better comfort for passengers at the back - a trait that's gladly kept even in the latest Triton. 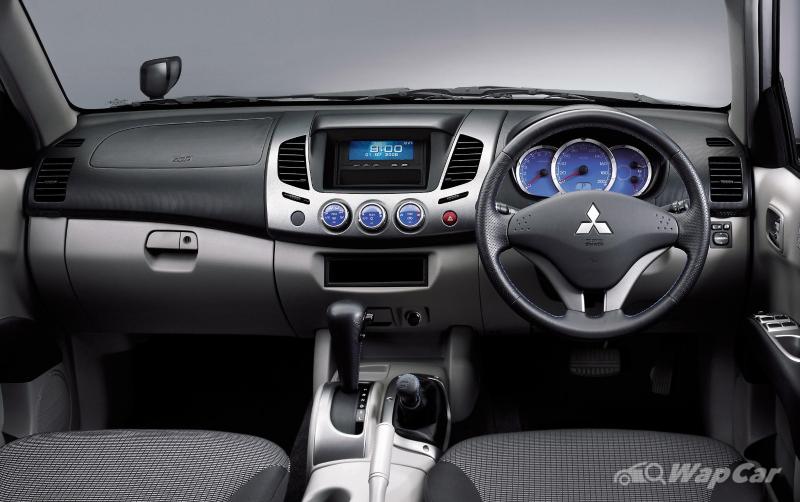 The turbodiesel mill is now upgraded with commonrail direct injection technology - the 2.5-litre variant made 138 PS, making it the most powerful pick-up truck on sale in Malaysia at that time. Later on, the 160 PS/347 Nm 3.2-litre model topped that. 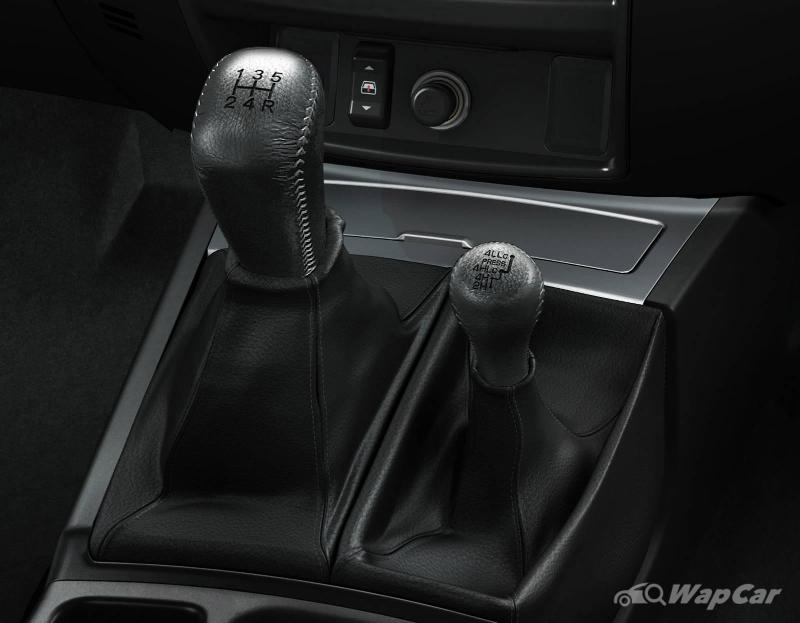 Variable geometry turbocharger (VGT), then first in segment, were fitted to later models.

This generation of the Triton also came with the clever 'Super Select 4WD' system, which allows one to drive in 4H mode on tarmac, as well as allow switching from two-wheel drive to four-wheel drive while driving. 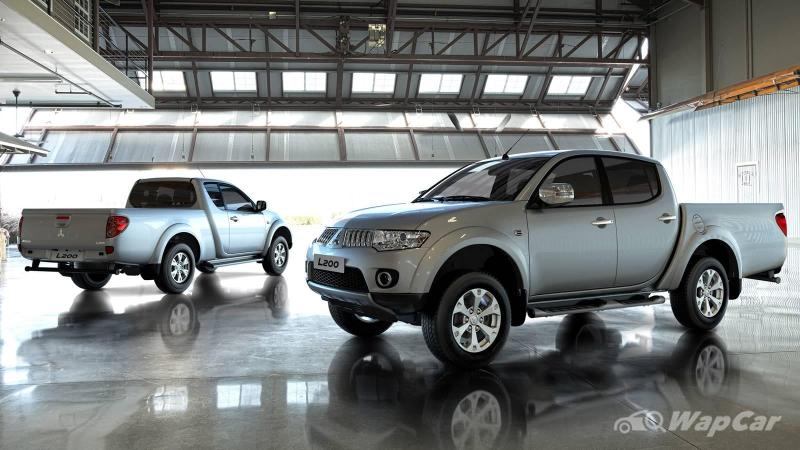 Mitsubishi Motors sold 1,423,000 units of the Triton in approximately 150 countries. 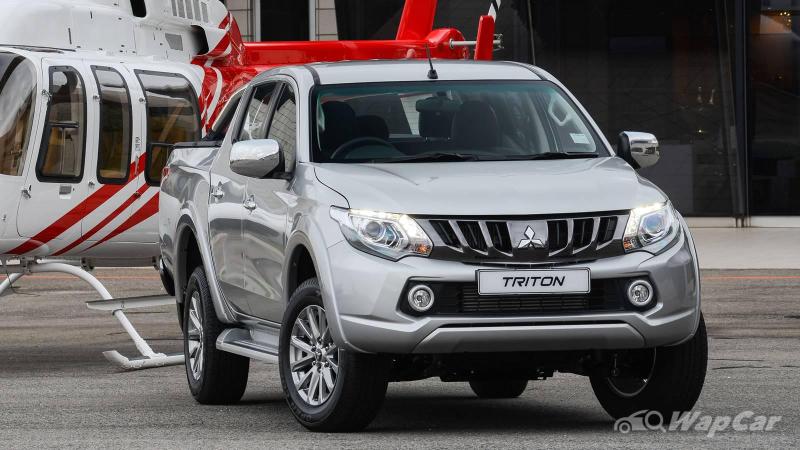 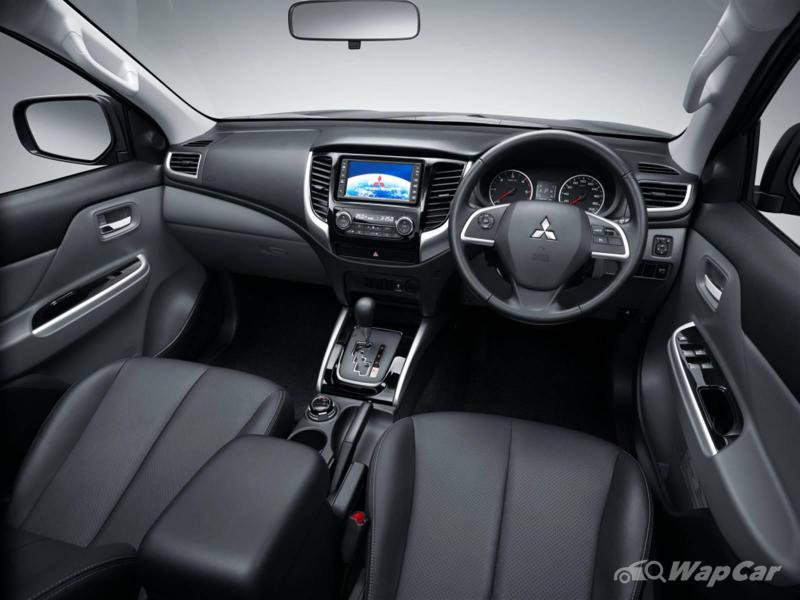 Automatic bi-xenon HID headlamps with integrated LED DRLs, smart keyless entry, engine push start button, tilt and telescopic steering, and paddle shifters were all found on this gen of the Triton - making it the first pick-up truck in Malaysia to offer all these niceties. 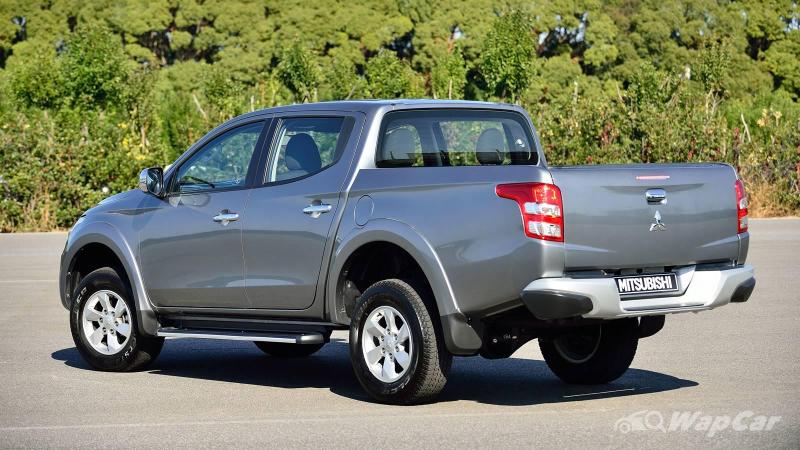 Along its lifecycle, the model was also offered with a 2.3-litre MIVEC commonrail turbodiesel mill, pushing 181 PS/430 Nm.

Also read: This is why the Mitsubishi Triton’s Super Select 4WD is the best 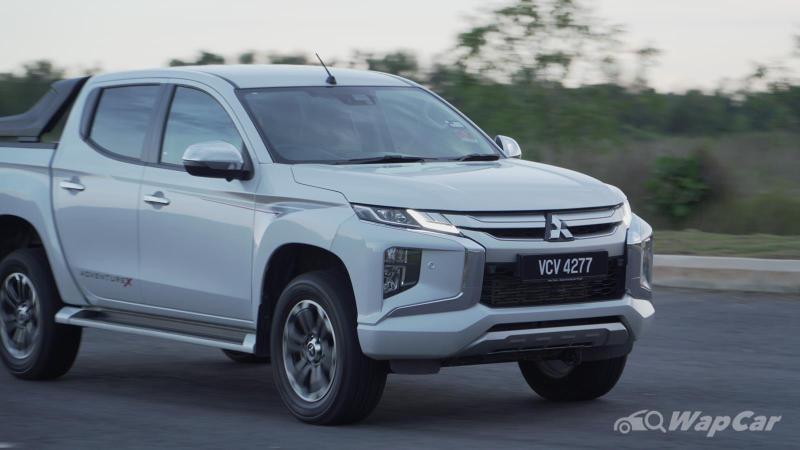 Hitting Malaysian roads (and trails) in 2019, the latest Triton brings with it a healthy list of kit underneath the wholly-redesigned exterior and interior. 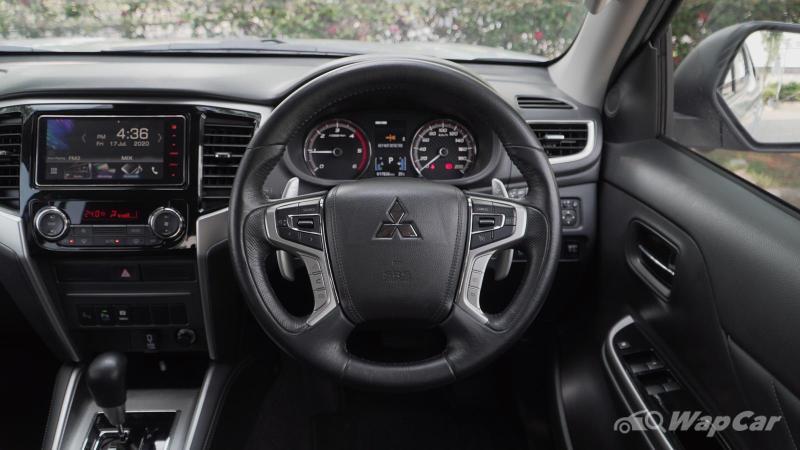 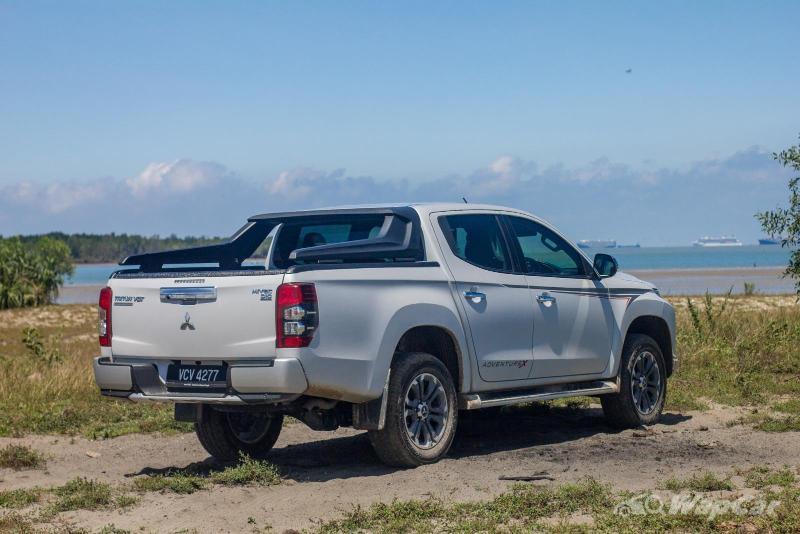 The headlining feature for this iteration of the Triton is its comprehensive list of advanced driver assistance system (ADAS) functions:

But that's not all - the hopped-up Triton Athlete will be launching later this week, featuring a more aggressive exterior package among other things. 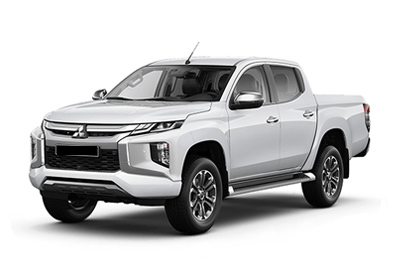