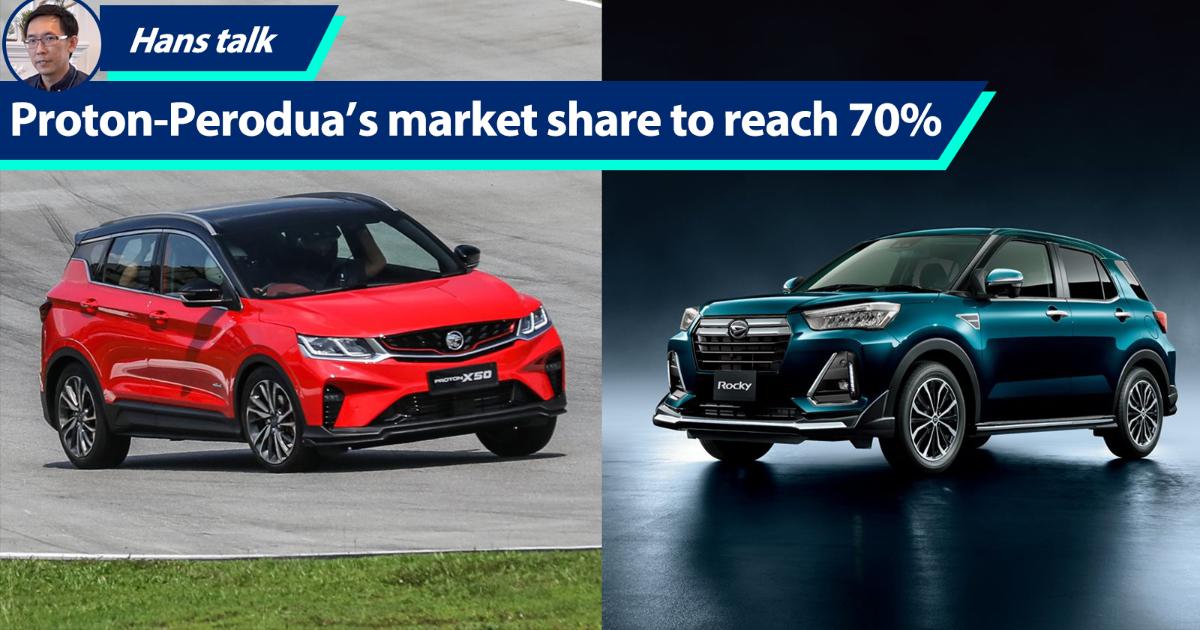 Over the next 5 years, the new normal for the Malaysian car market will eventually see less choices for consumers as the Big-3 Japanese car makers – Toyota, Honda, Nissan – retreat and cede ground to Proton and Perodua, whose upcoming range of models are more than a match against alternatives from Toyota and Honda. 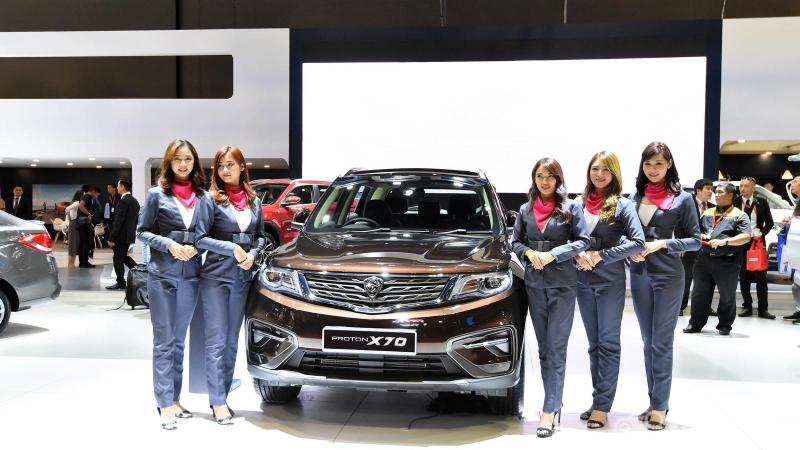 The Proton X70 has already eroded Honda Malaysia's sales, though it's still the No.1 non-national brand here. The Proton X50 will certainly suppress Honda’s progress even further.

The only respite now is that despite collecting over 40,000 orders for the X50, Proton is only able to fulfill barely 10 percent of the orders, as the Covid-19 situation has affected Proton’s supply chain more than other any other brand.

The cause of the decline of non-national brands

This is only the beginning. The big hit will come once Perodua launches its D55L compact SUV, expected by March 2021.

Sources have indicated that the D55L could have a starting price as low as RM 60k. 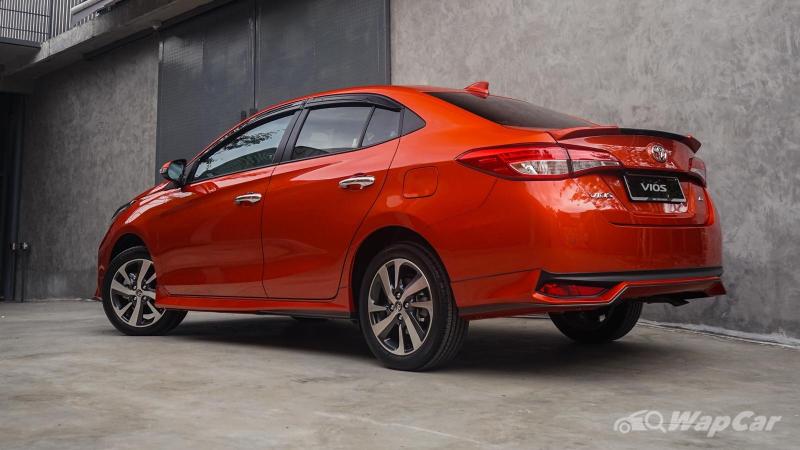 These three lower priced, tax-deducted ‘national brand’ (is it still correct to refer them as such?) SUVs – D55L, X50, X70 - will certainly pull sales away from Toyota and Honda’s core B-segment models like the Vios, Yaris, City, Jazz, and HR-V. 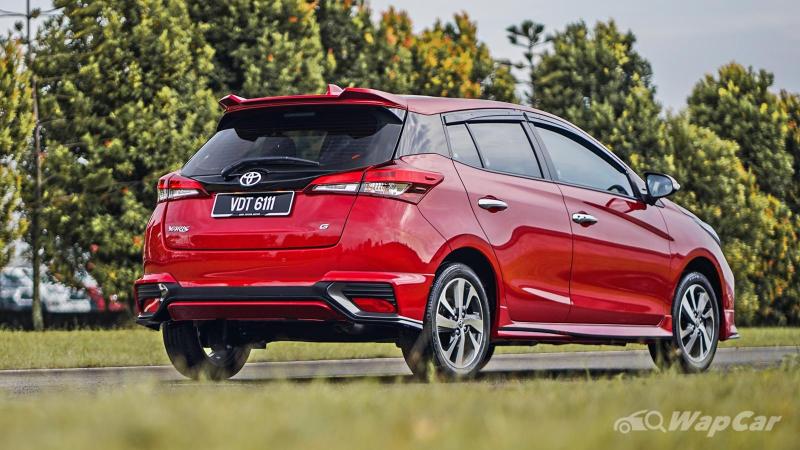 It doesn’t matter than the City/Jazz and Vios/Yaris are sedans and hatchbacks. Make no mistake. The raison d'etre of these SUVs is to pull buyers away from traditional sedan/hatchback segments and unlike Proton and Perodua models of yesteryears, these new SUVs closely match Japanese models in terms of social image and features. 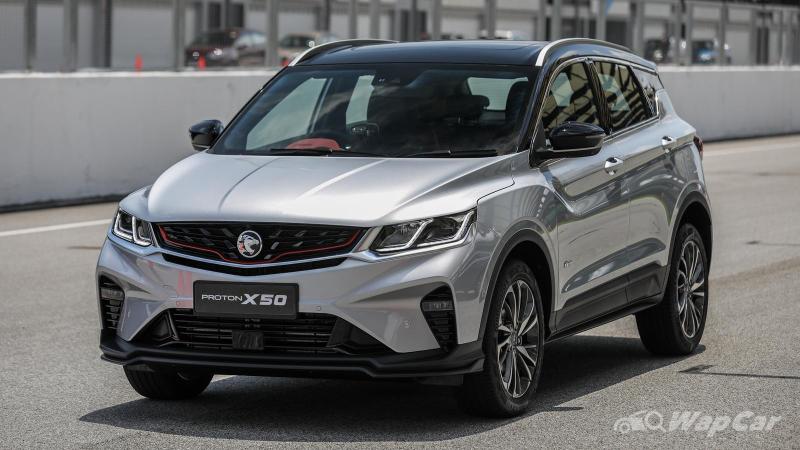 When supply of the Proton X50 is restored and the Perodua D55L is launched, both UMW Toyota Motor and Honda Malaysia will certainly feel the heat of the stiffer competition.

It will mark the end of a short but intense period of growth experienced by non-national brands in the mid-2010s.

Since 2019, national brands have recovered their market share to above the symbolic 50 percent level, improving from 48.8 percent in 2018 to 62.3 percent in 2020, mostly due to improvements from Proton.

Between 2018 and 2020, Proton’s market share doubled from 10.8 percent to 20.7 percent, while Perodua maintained its usual 1 to 2 percent annual increase, suggesting that Proton is taking away sales from other Japanese brands, while Perodua is largely ignoring whatever Proton is doing and is carrying on with its business as usual.

Also read: Proton wants the No.1 spot, but this is how big their models' gap from Perodua is 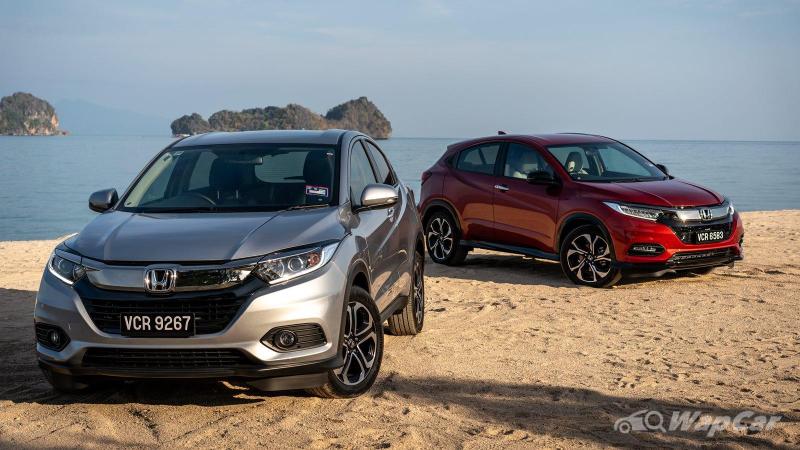 At the current run rate, the combined market share of Proton and Perodua could hit 70 percent by the end of this year. Assuming that Proton doesn't lose too many buyers waiting for their Proton X50, it's total sales should hit 140,000 units soon, notwithstanding Covid-19, up from the 109,716 units registered in 2020.

End of a good run, the peak of Toyota and Honda

The years between 2014 and 2018 were good one for non-national brands, especially Honda, which experienced unprecedented growth, overtaking not just Proton, but also Toyota.

Malaysia is one of the few countries in the world where Honda sells more than Toyota. In 2017, it set a new sales record of 109,511 units – the highest ever achieved by any non-national brand in Malaysia, breaking Toyota’s 2012 record of 105,151 units.

Beginning in the early 2000s, both Toyota and Honda were making significant inroads into market segments that were traditionally occupied by Proton.

The Toyota Unser and the first generation Honda City started the trend. Both were developed specifically to meet the needs of users in this region, and were priced competitive enough to pull buyers away from traditional Proton sedans like the Waja and Wira. 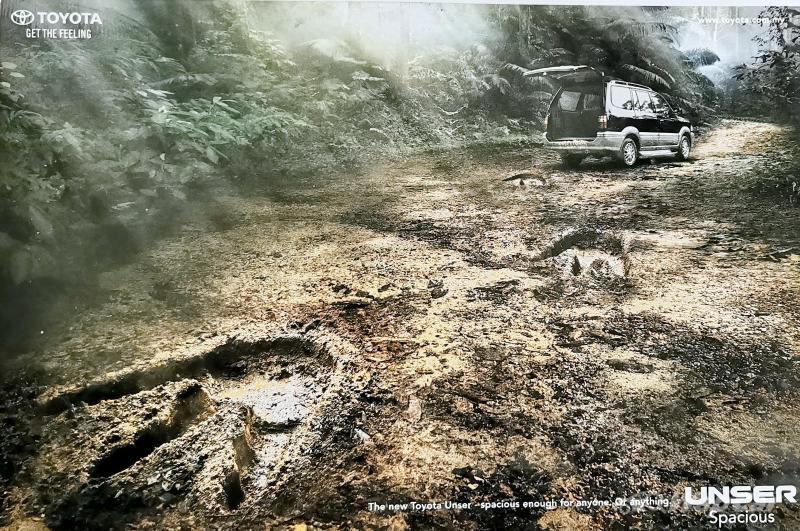 When Toyota followed up its act with the Toyota Vios, Hilux, and Avanza, it was the death kneel for Proton. By 2006, Proton’s market share fell to its lowest ever, 23.6 percent, with just 115,706 units sold.

This was also the period when 9-year loans became the norm. Although Toyota and Honda models were still slightly more expensive than a Proton, the difference in monthly instalments was small enough for buyers to stretch their budget further.

The more liberal financing terms, which was meant to boost the car market after the ’98 Asian Financial Crisis, boosted total industry volume (TIV) from 397,643 units in 1997 to a record high of 666,674 units in 2015, before the weaker Ringgit raised car prices further and slow economic growth dampened demand in the later years.

In 2005, once Toyota launched its Toyota Hilux (Vigo generation), sales grew even further. At that time, the lifestyle pick-up truck genre was still growing, mostly because it was the cheapest non-national car (apart from an Avanza) one could buy.

There weren’t a lot of choices in the market then and anything that was not a Proton or a Perodua, even if it’s a pick-up truck, was seen as a better buy over a Proton Waja or a Wira.

Although the Hilux didn’t start the lifestyle truck trend (the honour goes to the Ford Courier Mitsubishi Storm - the latter was the first truck sold here with an automatic transmission) but once Toyota entered the game, it was game over for the Ford Ranger and Mitsubishi Storm.

The Toyota Avanza also became a hit for the same reason, it was the cheapest non-national car on sale and since there weren’t any SUVs at that price point apart from the Perodua Kembara, consumers saw the MPV Avanza as a quasi-SUV.

No kidding. Customers said the Avanza’s high driving position and low price were the two main purchase reasons. The third row seat feature was ranked lower. It would lay the foundation for the shift to SUVs that we see today.

Toyota was so dominant that it seemed almost unstoppable, but stopped it did. Hubris comes from success. Sales hit a record high of 105,151 units in 2012 but by 2016, Toyota had lost more than 10 years’ worth of progress, with sales dropping down to circa 2004 level, doing just 63,757 units.

The cause? Honda Malaysia took better advantage of EEV incentives that were announced in the 2014 National Automotive Policy. Following this, all Honda models were undercutting Toyota ones while offering better features.

Toyota also missed the SUV shift, ironic for a company that prides itself to keeping a very close tab on market demand.

Toyota didn’t have an answer to the CR-V and HR-V. The Toyota RAV4 came 5 years too late and when it did, its fully imported status meant that it never even qualified as a competitor to the CR-V. 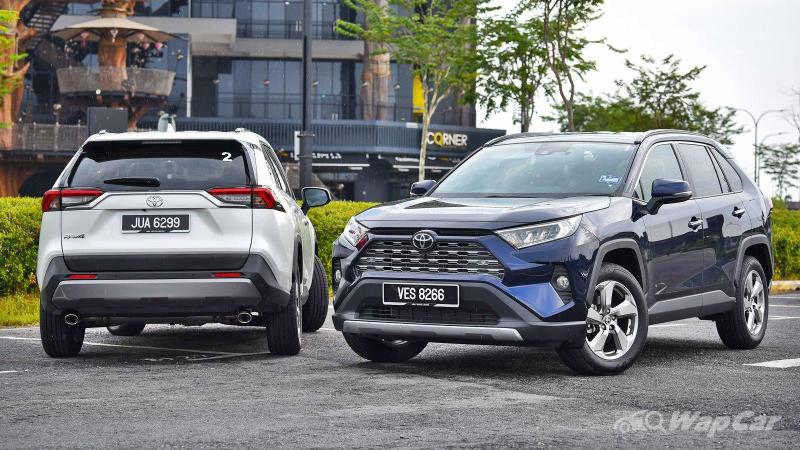 The Corolla Cross will be launched later this year but it’s also five years too late and when it’s finally launched here, it will have to contend with a much smaller market size now that the Proton X70 and X50 brothers have fenced up more than half of the SUV market to themselves.

Also read: Toyota Corolla Cross in Malaysia – Will it be cheaper than the Corolla Altis? 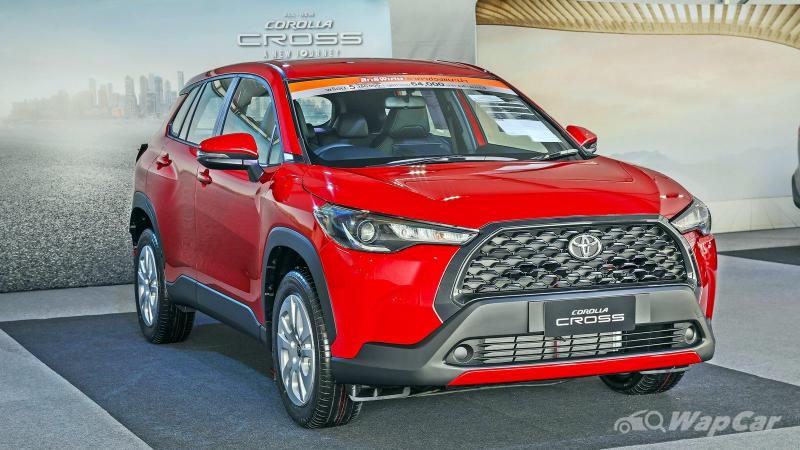 At least the Honda HR-V was milking what it could while the market was still relatively open.

By 2017, Honda Malaysia set a new record for non-national brands in Malaysia, reaching 109,511 units. However by 2018, the Proton X70 was hogging the limelight months before it was even launched and sales of Honda vehicles have been dropping since.

Impact to consumers as non-national brands scale back

A stronger Proton and Perodua is good news for national pride, or if you own DRB-Hicom and UMW stocks, but it’s bad news for regular consumers.

The next five to ten years will see the Malaysian market returning to the ‘90s, where at its peak in 1999, national brands controlled 82.6 percent of the local car market.

At the current rate, national brands should strengthen their market share to over 70 percent by year-end. 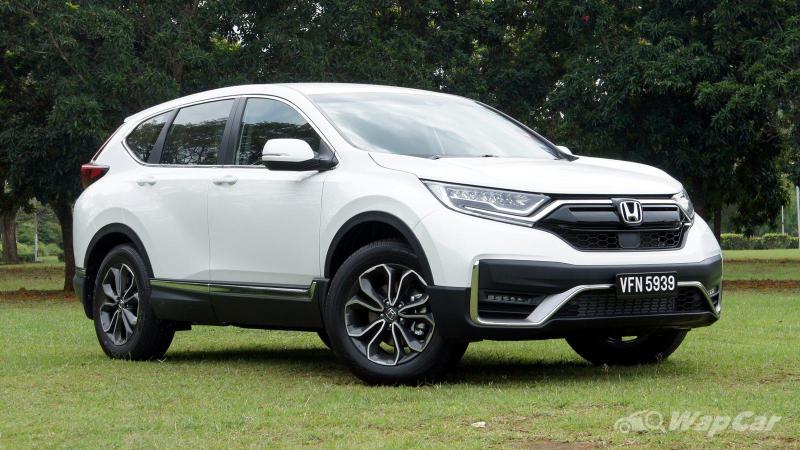 Malaysia may boast of having a relatively large car market worth about 600,000 new cars registered annually, but to foreign car companies looking to invest into the country, this is meaningless if more than 70 percent of the market is locked out from them. 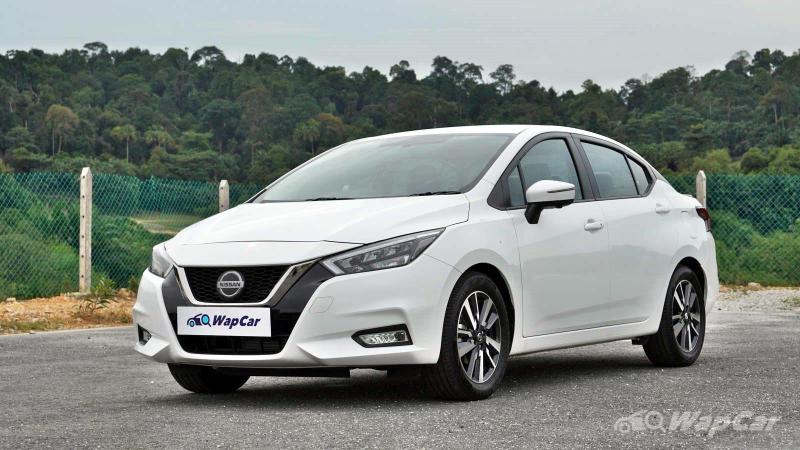 On paper, Malaysia no longer has a national car policy and we are an open market. Any manufacturer can now apply for a manufacturing license without needing a local partner. 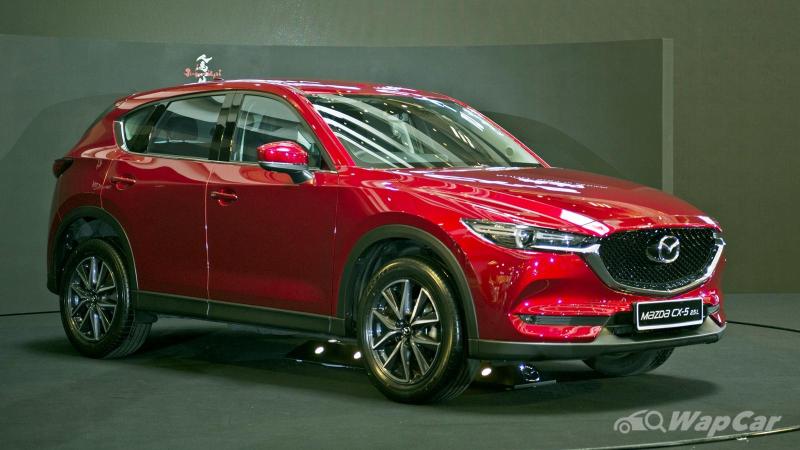 In reality however, we still maintain a set of opaque tax incentives that are rigged to continue providing preferential excise tax reductions to Proton and Perodua, allowing them to undercut foreign rivals by paying little to no excise tax.

Also read: Why is a Proton X70 cheaper than a Honda CR-V by RM53k? What's the difference in taxes?

As non-national brands lose market share, Malaysia will rank further down the priority in terms of getting preferential pricing, specifications, stock allocation, and of course, introduction timing.

So don’t complain that car companies don’t care about Malaysia when new models are launched first in Thailand, Indonesia, even Vietnam and Philippines, with better features, before reaching Malaysia, who will also have to contend with selling older models longer.

These companies are running a business and there are performance targets to be met. Why should they prioritize Malaysian buyers when the rising Vietnam offers better returns on their investments?

Like any wholesale purchase, the best products are typically in short supply and these products are always given to the best performers at the best prices. Where do you think Malaysia stands?

Whispers in the office corridors of Tokyo, Seoul, and Wolfsburg say that Malaysian distributors make the most special requests but sell the least cars.

The proverbial fly on the wall would most likely hear, "They can't give a clear answer on their country's auto policy (when will EEV expire?) and tax policy's future (are they really going back to GST?), fuel quality and exhaust emisions road map (are they really going for B15 biodiesel, what's the emission standard plan?), electrification road map, so just let them wait."

There’s also the question about the reduced competition in the market place, which is bad not just for consumers, but also local parts suppliers. 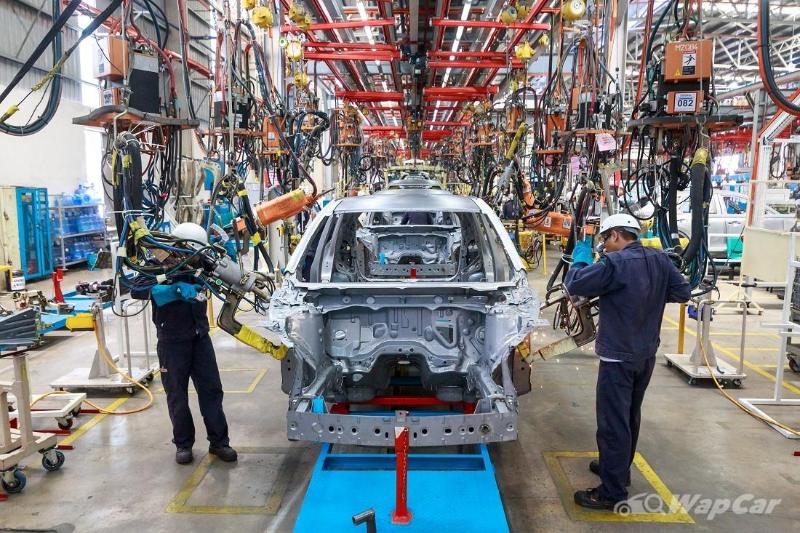 Local parts suppliers are also more vulnerable as they now rely on a smaller pool of clients, who will no doubt squeeze their margins even tighter. Remember that Malaysia’s total industry volume is not growing as fast as before, so the pie isn’t getting any bigger.