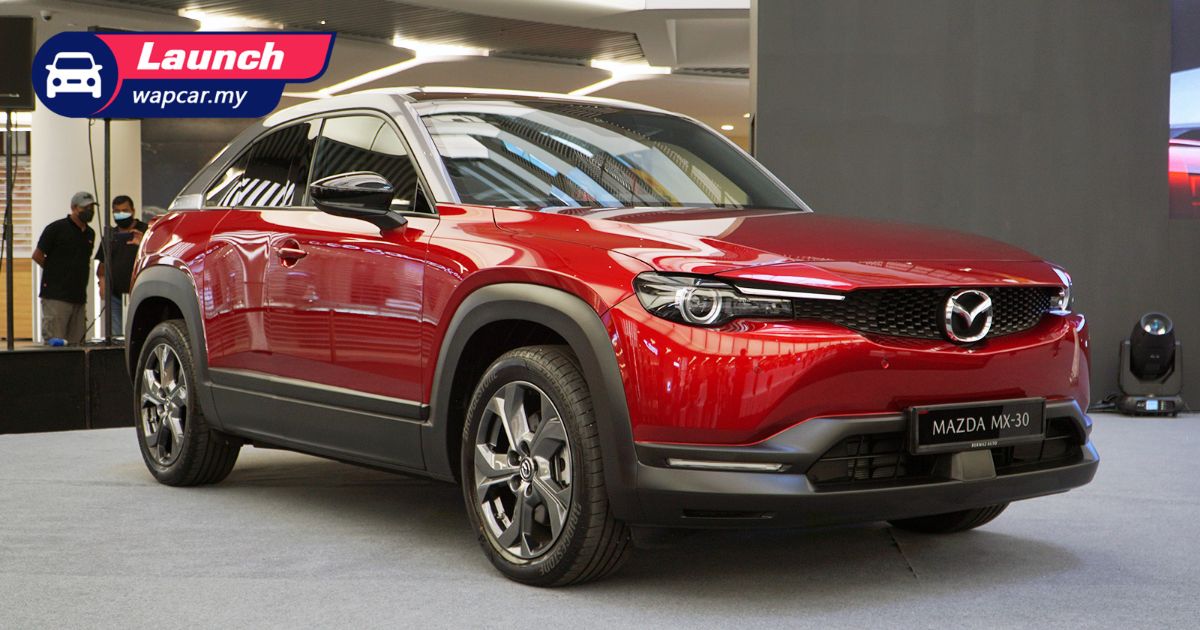 Two months after it was previewed to the media, Bermaz Motor launched the 2022 Mazda MX-30 at an event in 1 Utama alongside the Mazda CX-8 2.5T. Fully imported (CBU) from Japan, there are two variants of the MX-30 announced which are the Mid and High variants though only the latter’s price is announced. 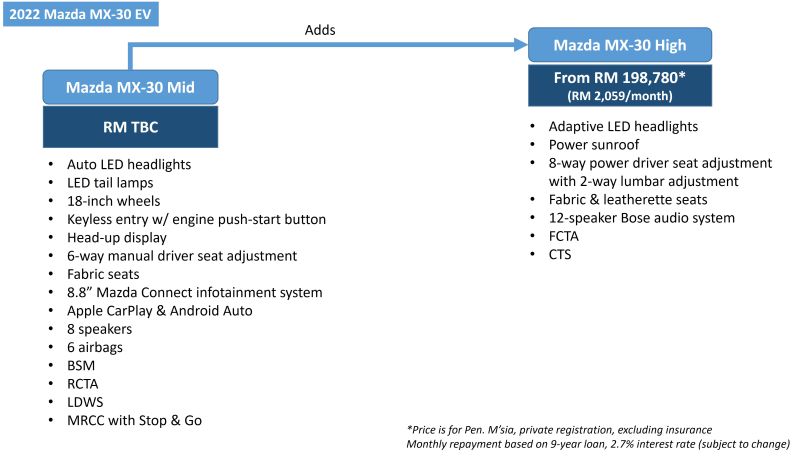 The Mazda MX-30 High e-Skyactiv battery electric vehicle (BEV) starts from RM 198,780 and is exempted from annual road tax until 31-December 2025. Though there are plug-in (PHEV) and mild-hybrid (MHEV) variants available elsewhere, Bermaz has no plans in bringing the non-BEV variants for now. 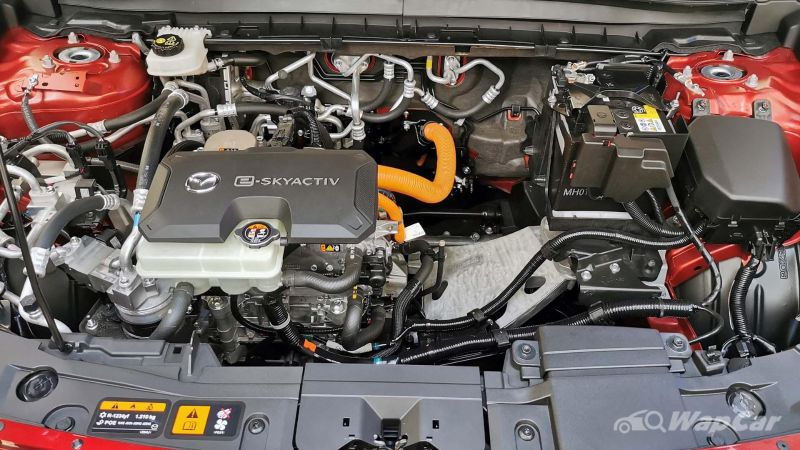 Juicing up the MX-30 is a 35.5 kWh battery that powers a synchronous AC motor driving the front wheels. The unique-looking electric crossover produces 145 PS and 271 Nm and has a 199 km (WLTP) range. 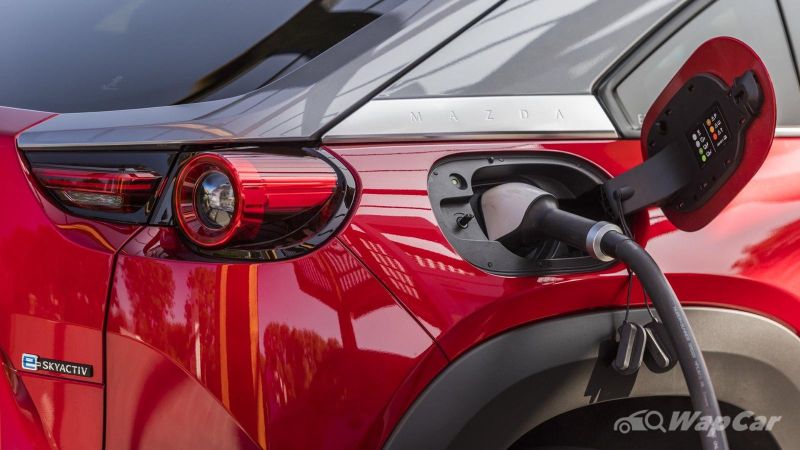 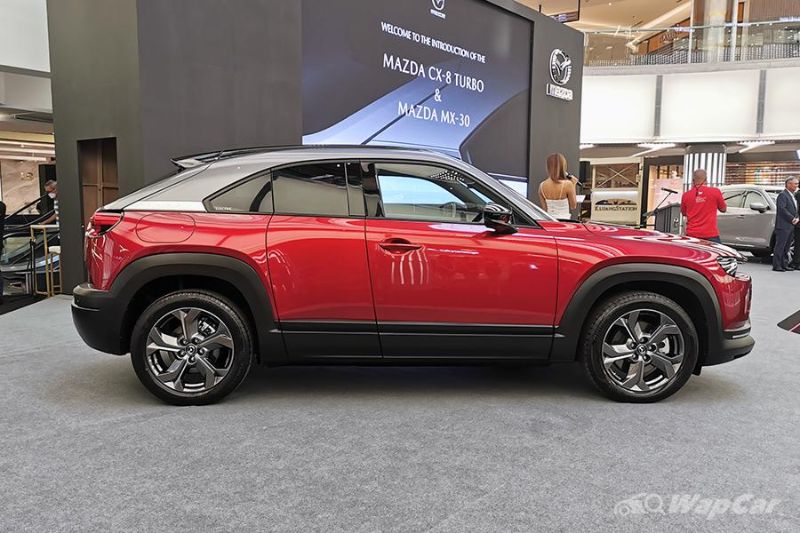 Besides, the MX-30’s real draw is its doors which are reminiscent of the Mazda RX-8. The RX-8’s doors are what gives the sports car a visual appeal (less so on its reliability) but nevertheless, it’s also what could attract people the most when they see the MX-30 up close. 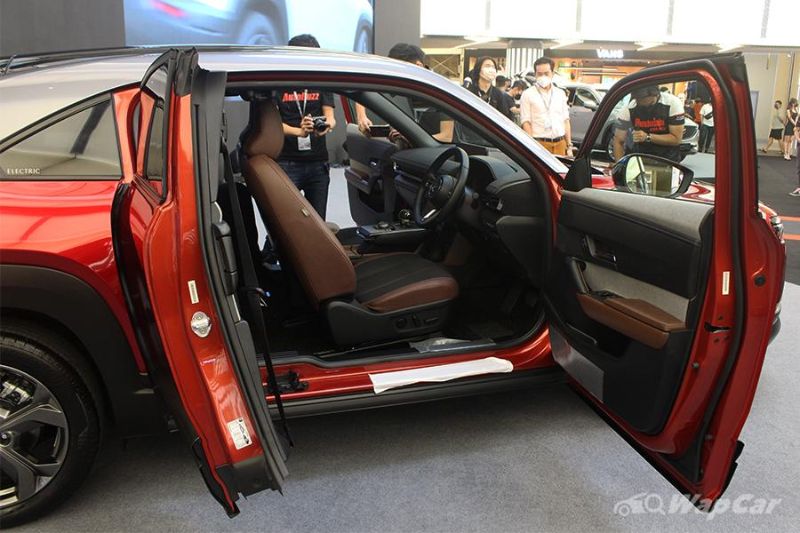 Open the doors and you might see a missing B-pillar but in truth, the pillars are integrated into the doors. The doors themselves are quite easy to open and close while not being too heavy. 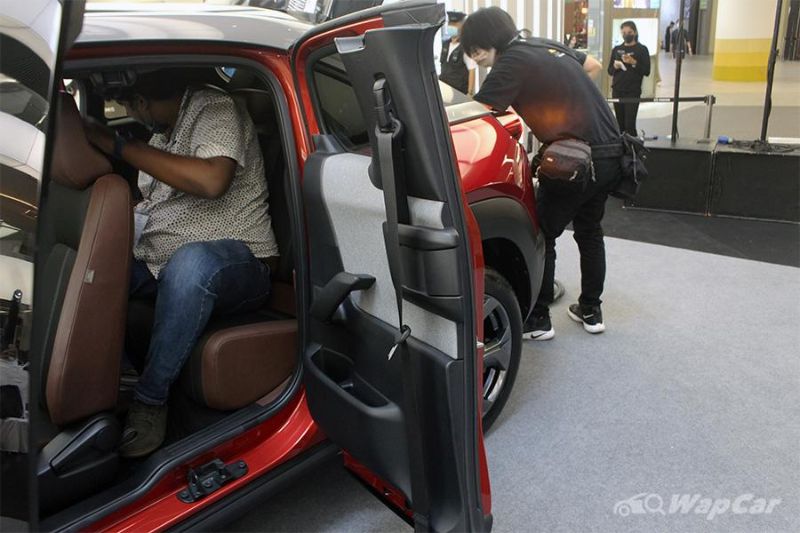 Oh, and Mazda refrains from calling these rear-hinged doors ‘suicide doors’. Instead, they are termed as ‘freestyle doors’ which is probably for the best as some explicit words do emit a trigger for some folks these days. 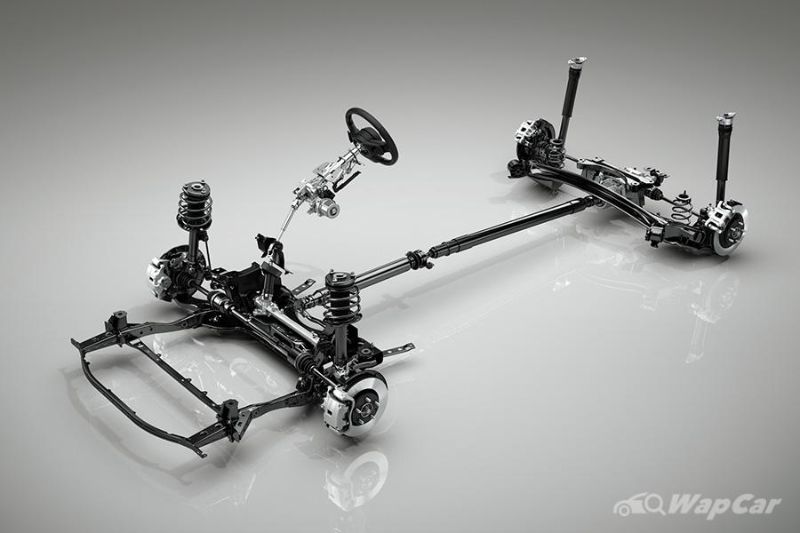 Mazda’s trademark G-Vectoring Control (GVC) is evolved into e-GVC Plus which leverages the torque characteristics of the electric motor to optimise the front-rear load shift under an even wider range of usage scenarios. In other words, the MX-30 would retain that jinba ittai feel around corners. 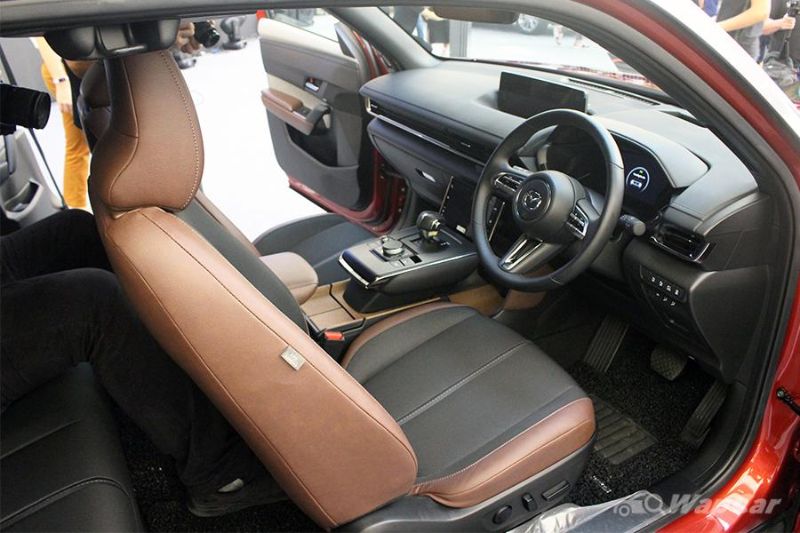 Step inside the MX-30 and you’re constantly reminded that you’re in a Mazda with the premium materials used for the interior which are also sustainably sourced. If the MX-30 were human, it would probably be a vegan who only buys local organic goods while also sewing their own threads gathered from old clothes bought at bundle shops. 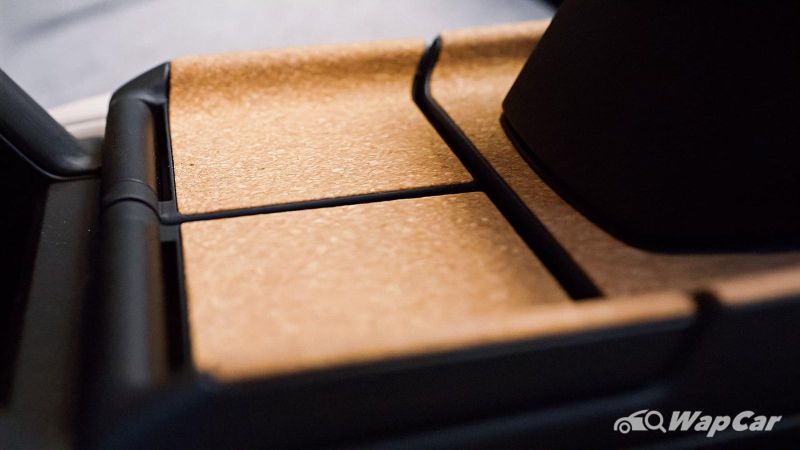 Jokes aside, the premium feel is still there even if it’s certified fresh by your locavore. The centre console is made from the bark of sustainably grown cork oak trees while certain fabric trims on the doors are made from recycled PET plastic bottles. 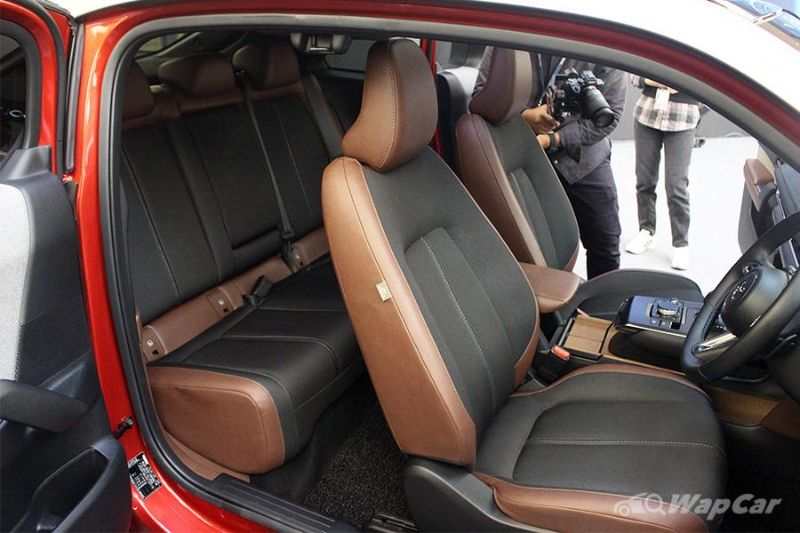 All these combined give an airy but also different look to the interior which is very fitting for an electric car. Just don’t sweat too much about where our electricity actually comes from. 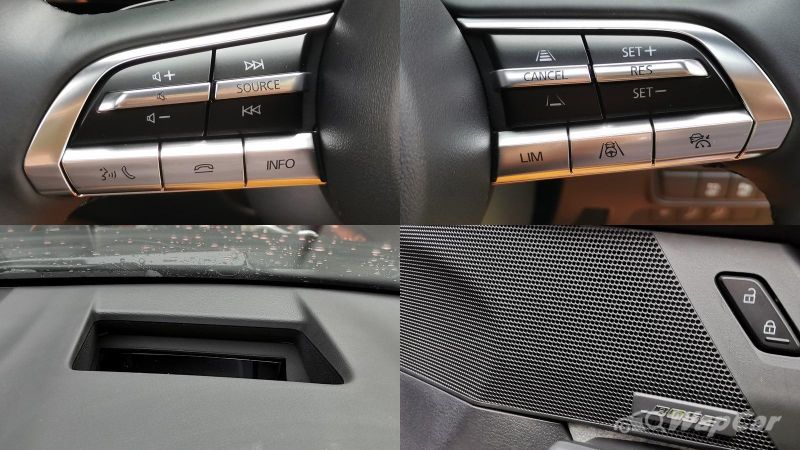 Features available on the MX-30 are:

Meanwhile, the MX-30 is also available with the Mazda i-Activsense ADAS suite which includes: 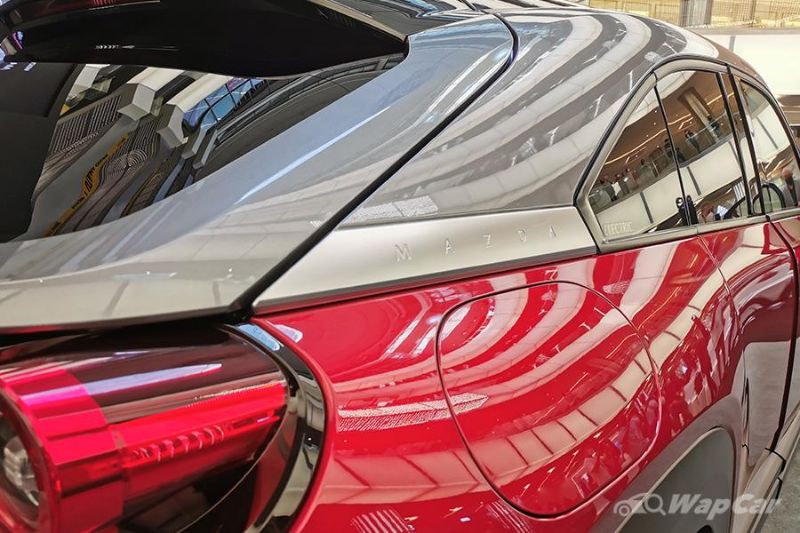 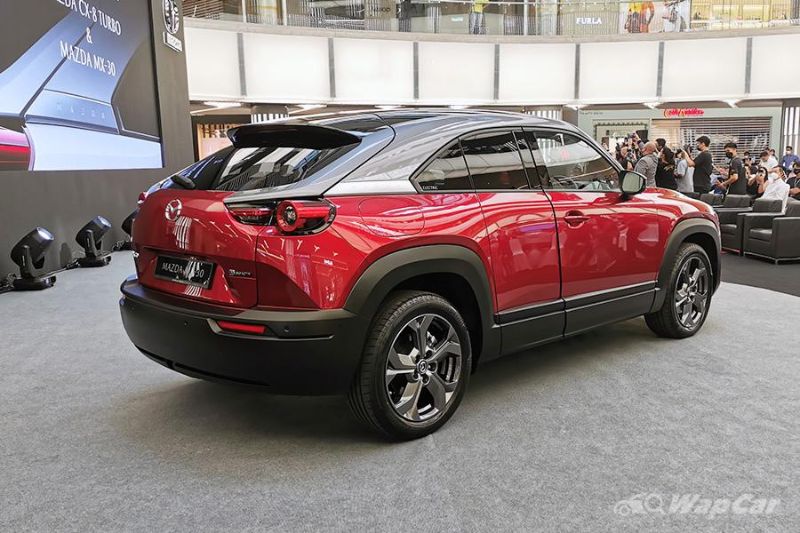 Given how small the EV market is in Malaysia, Bermaz has stated that it is expected to not be a volume seller like other Mazda models with only 30 units allocated this year. Deliveries will begin in Q4 of this year. 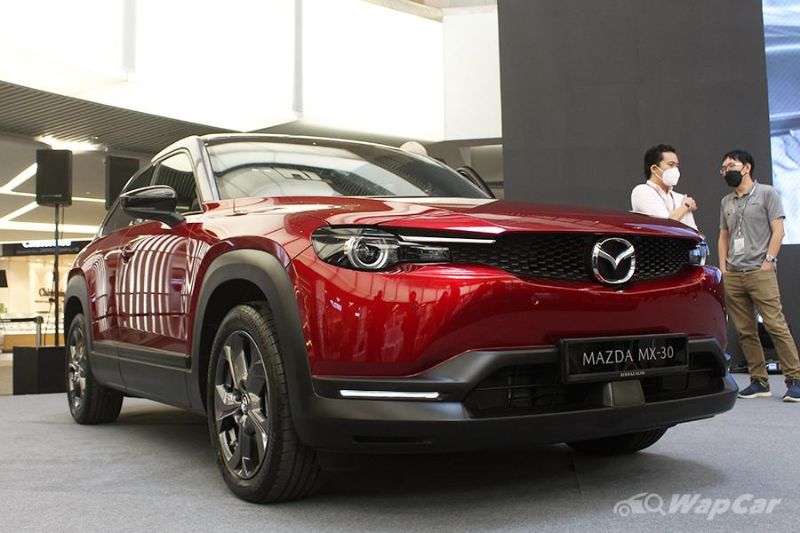 It is now officially open for booking and can be pre-ordered at the flagship Mazda Glenmarie showroom. The MX-30 comes with a 5-year/100,000-km manufacturer warranty and an 8-year/160,000-km battery warranty coverage. 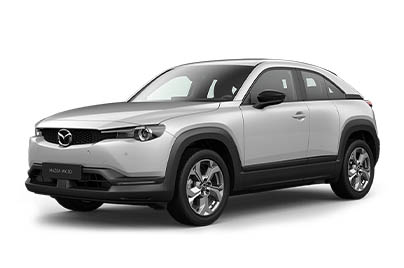